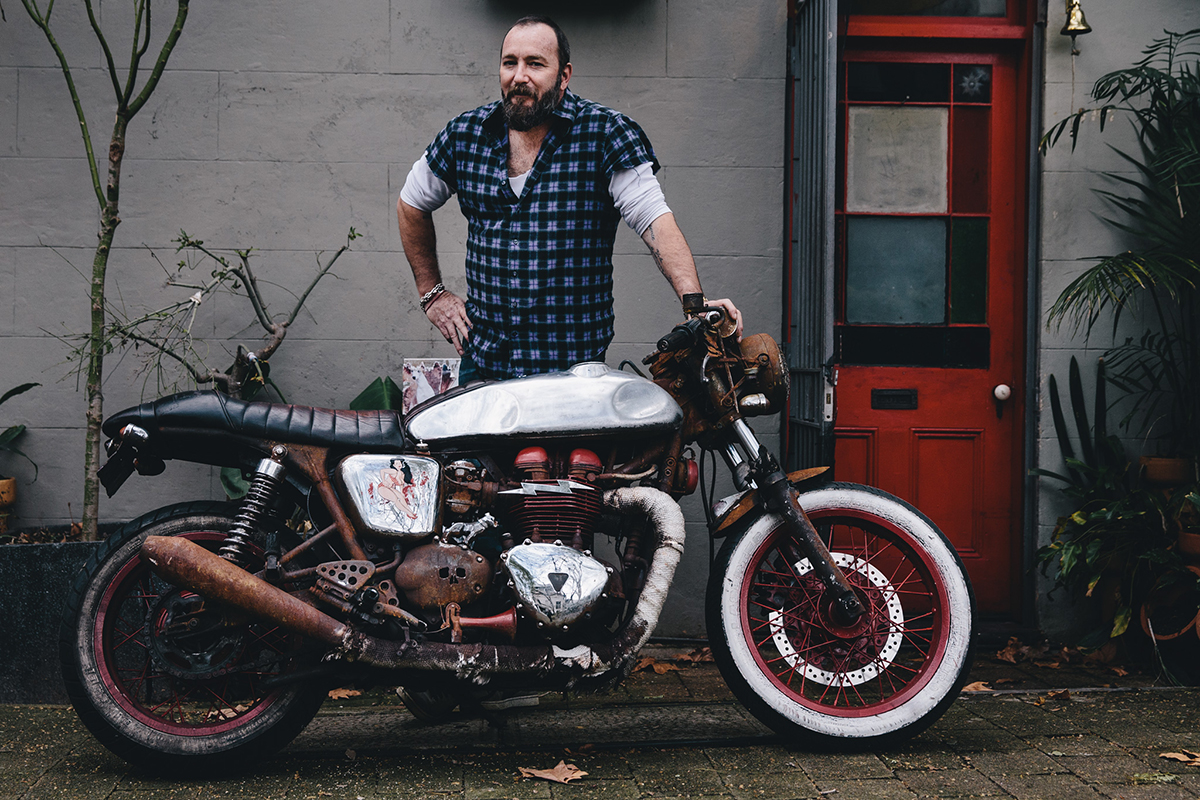 “So you purposely made the bike shitty?” asked a 72-year-old Actress/Chatterbox that had stopped by for a chat as we photographed Lucas’ rusty and ratty Triumph. We were regaled with stories of her father who rode Norton’s and Triumphs back in the 1920’s. This would be a prime example of an occurrence for many who ride; a connection and talking piece between strangers on the streets. Everyone has someone in their life that was fuelled by a passion for two wheels – be it today or 90 years ago. 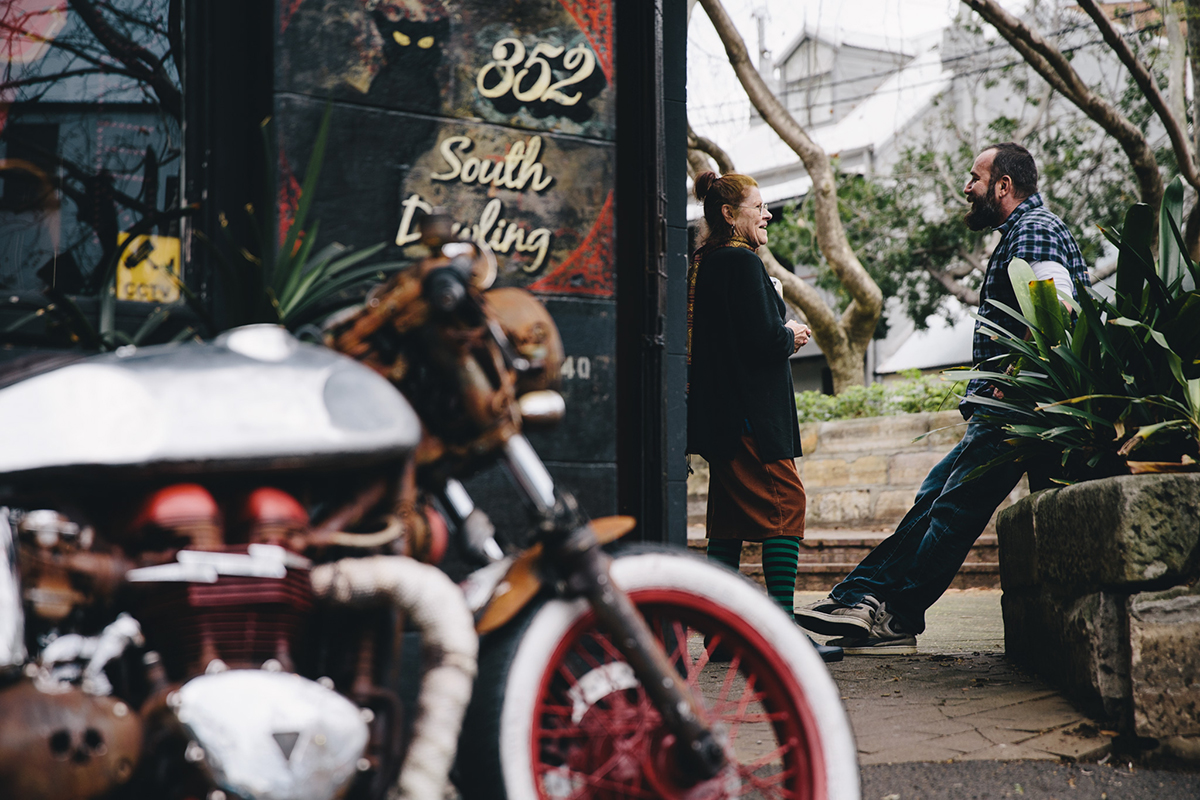 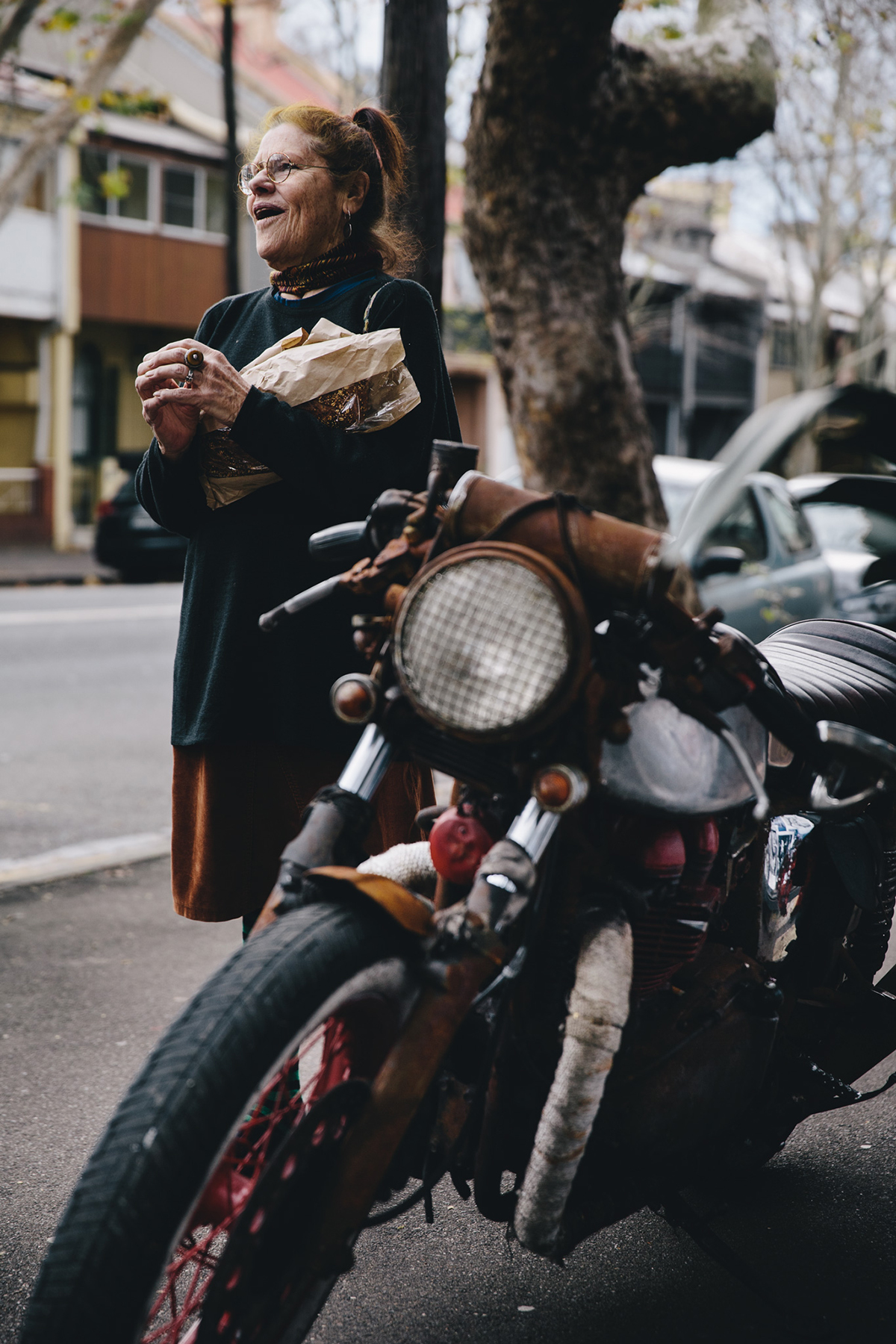 As Lucas and our new friend chatted away about motorcycles, the film industry and everything in between the rusty yet trusty “old” Triumph would show off the perfect backdrop; Lucas’ shop where old and eclectic items are sold in between his work on shows such as Aussie Pickers. 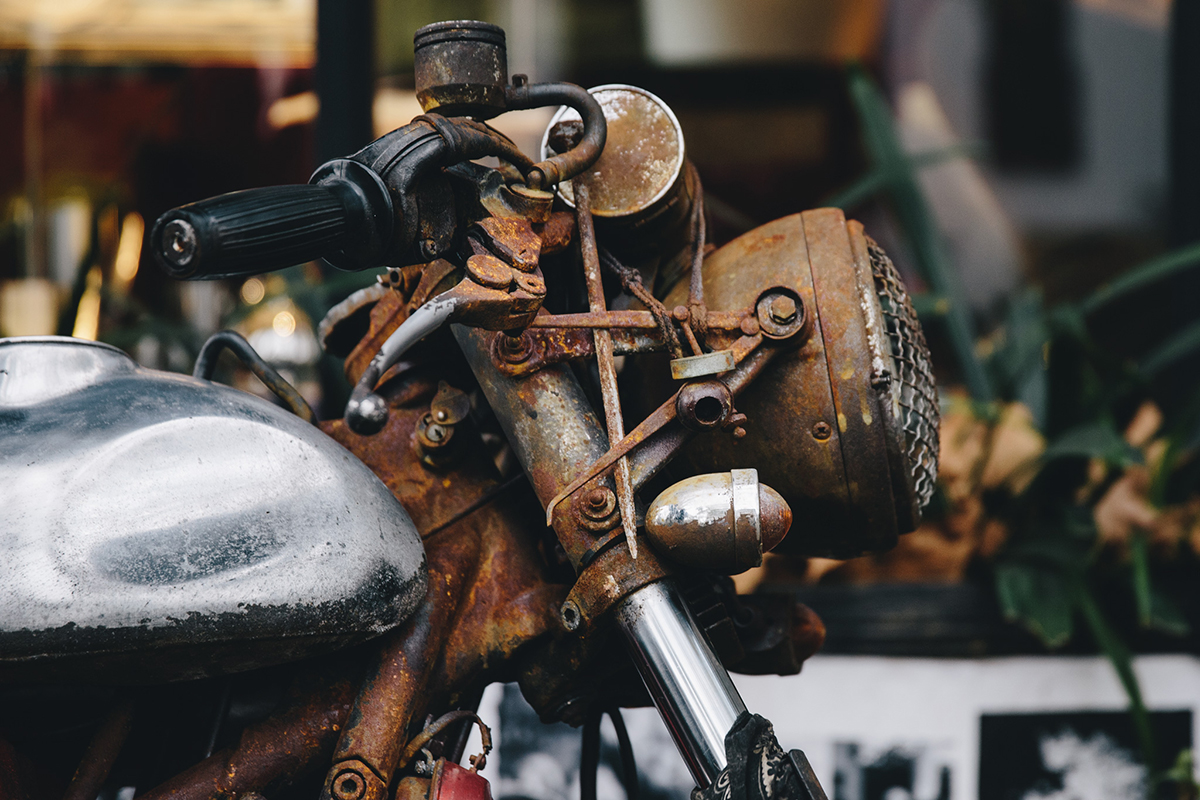 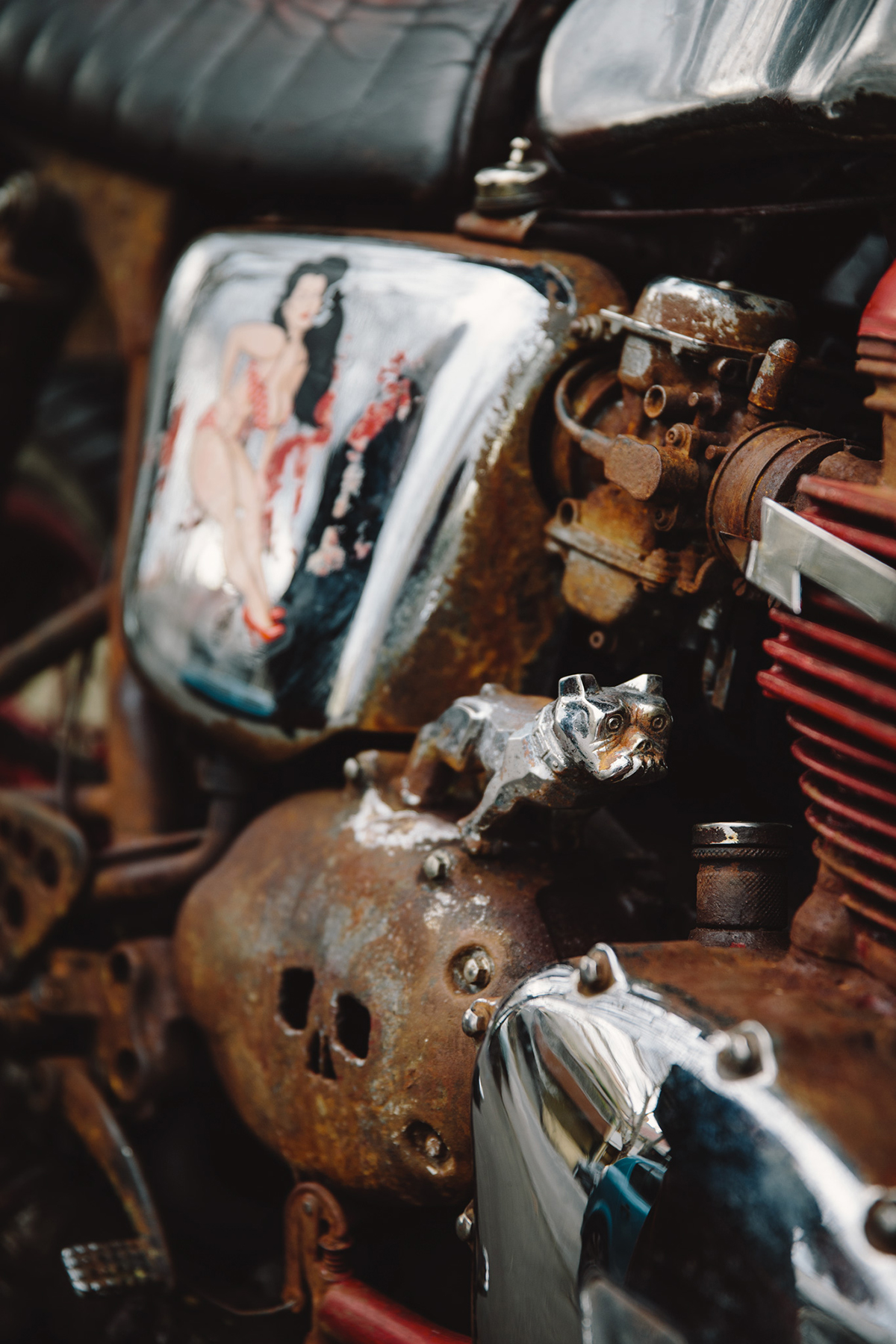 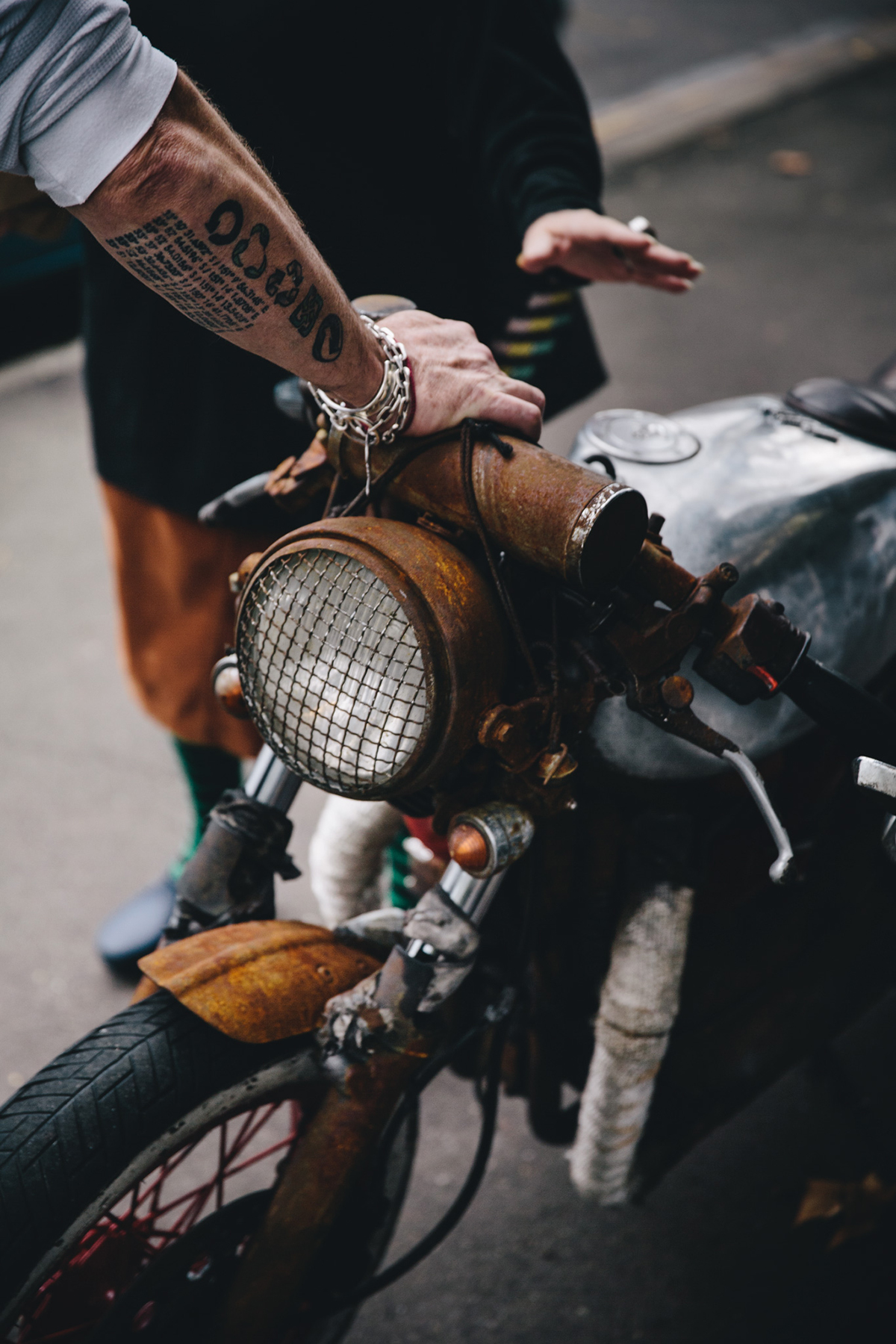 If you had guessed that Lucas’ bike was originally dredged out of the Atlantic sea and left on a trawler for months before coming to Sydney, you wouldn’t be doubted. This bike is no motorised-oceanic Excalibur however, and in fact is a more contemporary machine. Last of the Carbi’s, this 2008 Triumph Thruxton dubbed ‘Nix’ is an acute reflection of Lucas’ passion and personality, and much like Lucas the more you pry into this bike the more you’ll find. “It sums up for me the true nature of what it’s like to be Australian and so remote on the globe, we made what we needed.

Necessity is the mother of invention” 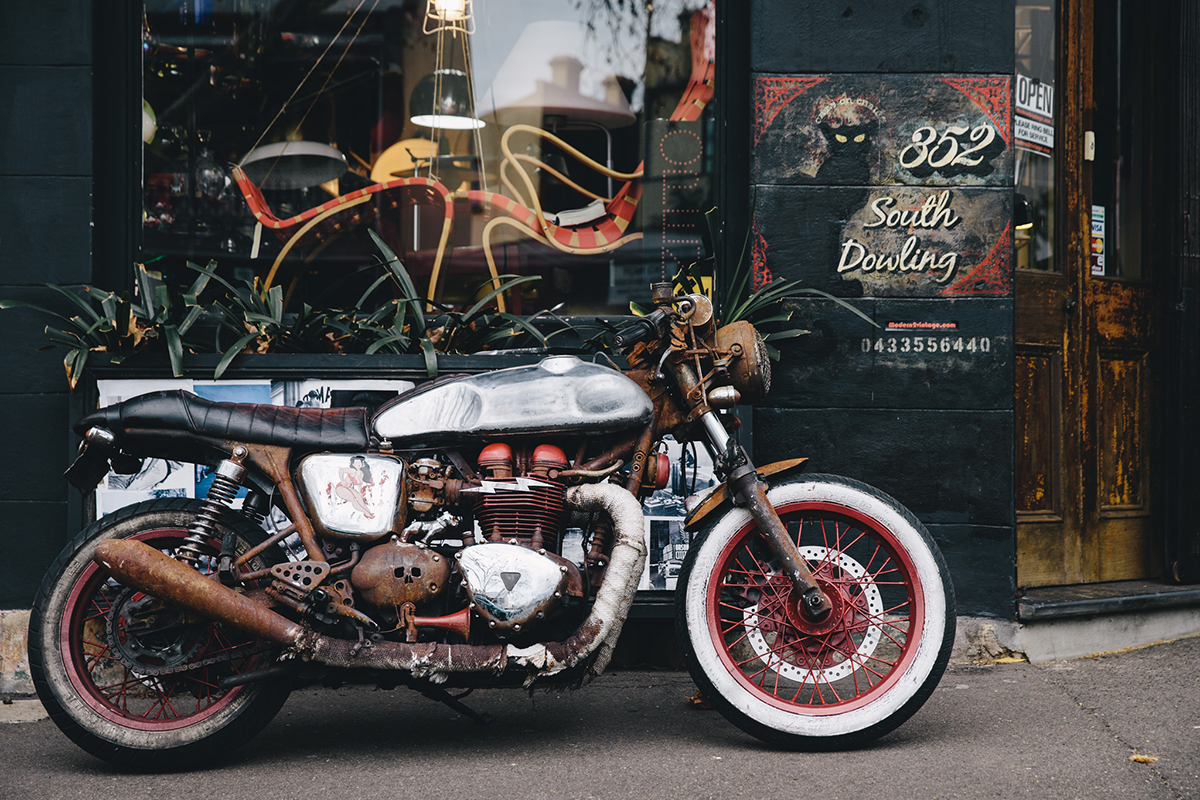 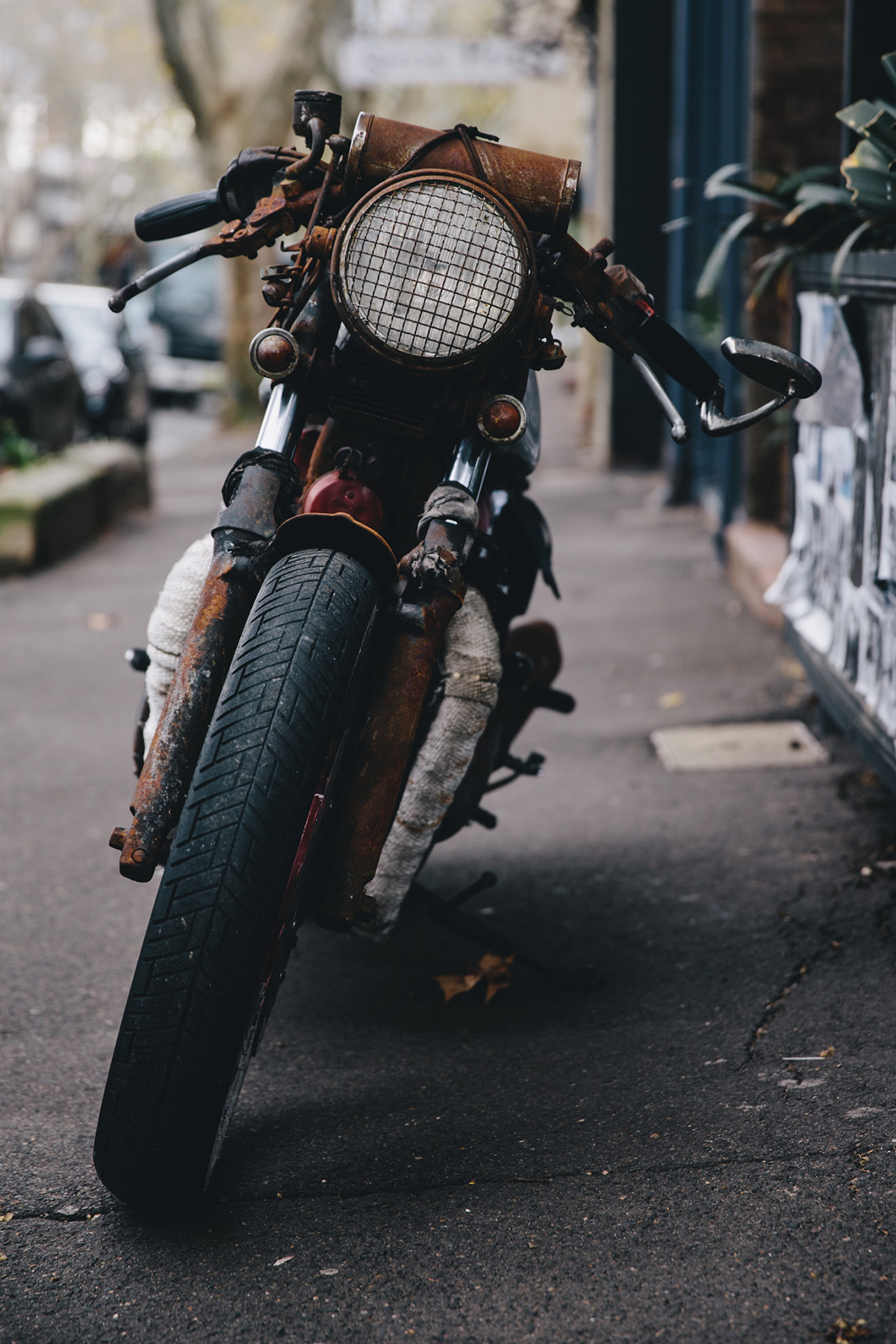 Lucas’ baptism into bikes was on a Honda Z50 Monkey bike, back in the good ol’ days (whenever those days were) “A kid from up the road rented his bike out to other kids, $5 for 5 laps of our local football oval. No helmet, no pads, just my Quicksilver boardies and thongs. It had the smell and sound of a crazed chainsaw about to explode. I knew this machine was going to be an addiction. With each lap of the footy oval my confidence grew, and by the last lap I was hooked. The throttle at full and tucking behind the speedo trying to see how fast it could go before it would explode, holding on hard and praying. No fear.” 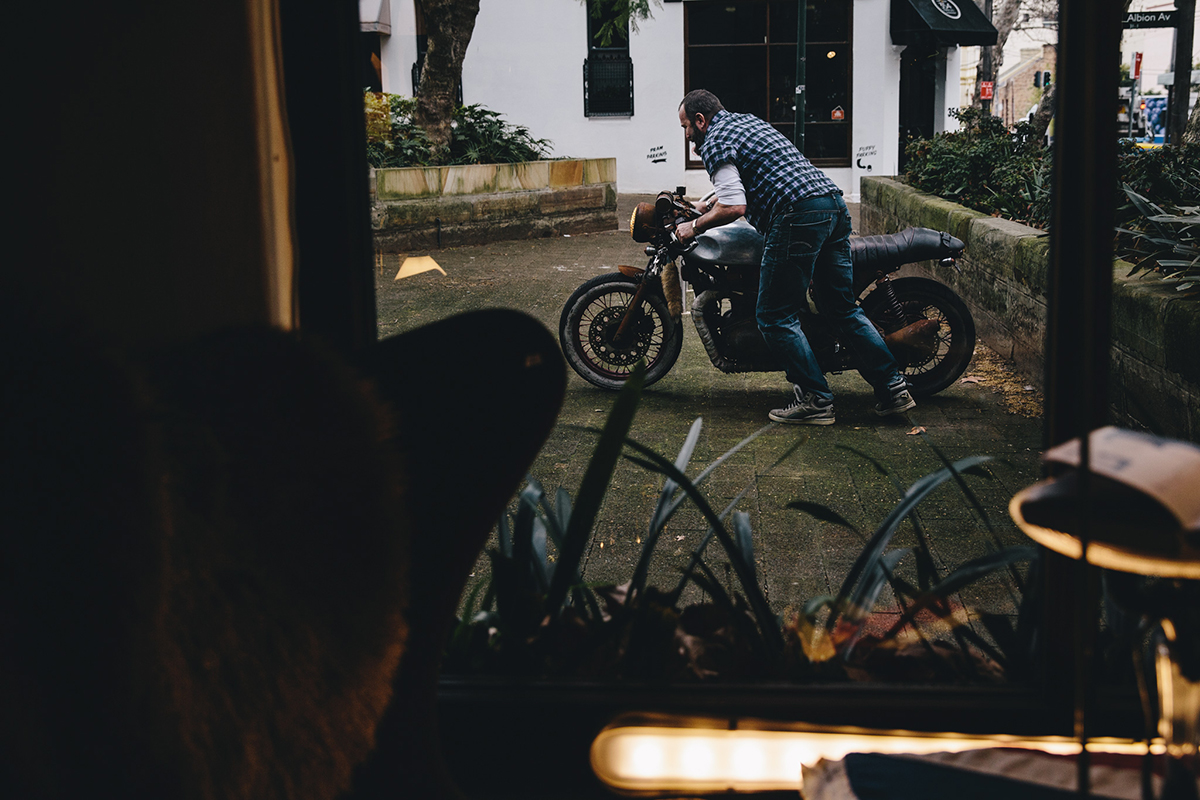 This burning passion for speed would cause Lucas to naturally nag and beg his Mum for a motorcycle, and after 4 years of persistence, she agreed. “Mum’s only condition was that I had to pay for it myself, so she arranged a job for me 5 arvo’s a week… at the Queen Elizabeth II Rehabilitation Centre for motorcycle victims. Well, needless to say I didn’t want a bike anymore after that, and it wasn’t until I was 35 that I would finally get my motorcycle licence.

To this day I believe that job, and my Mum, saved my life.” 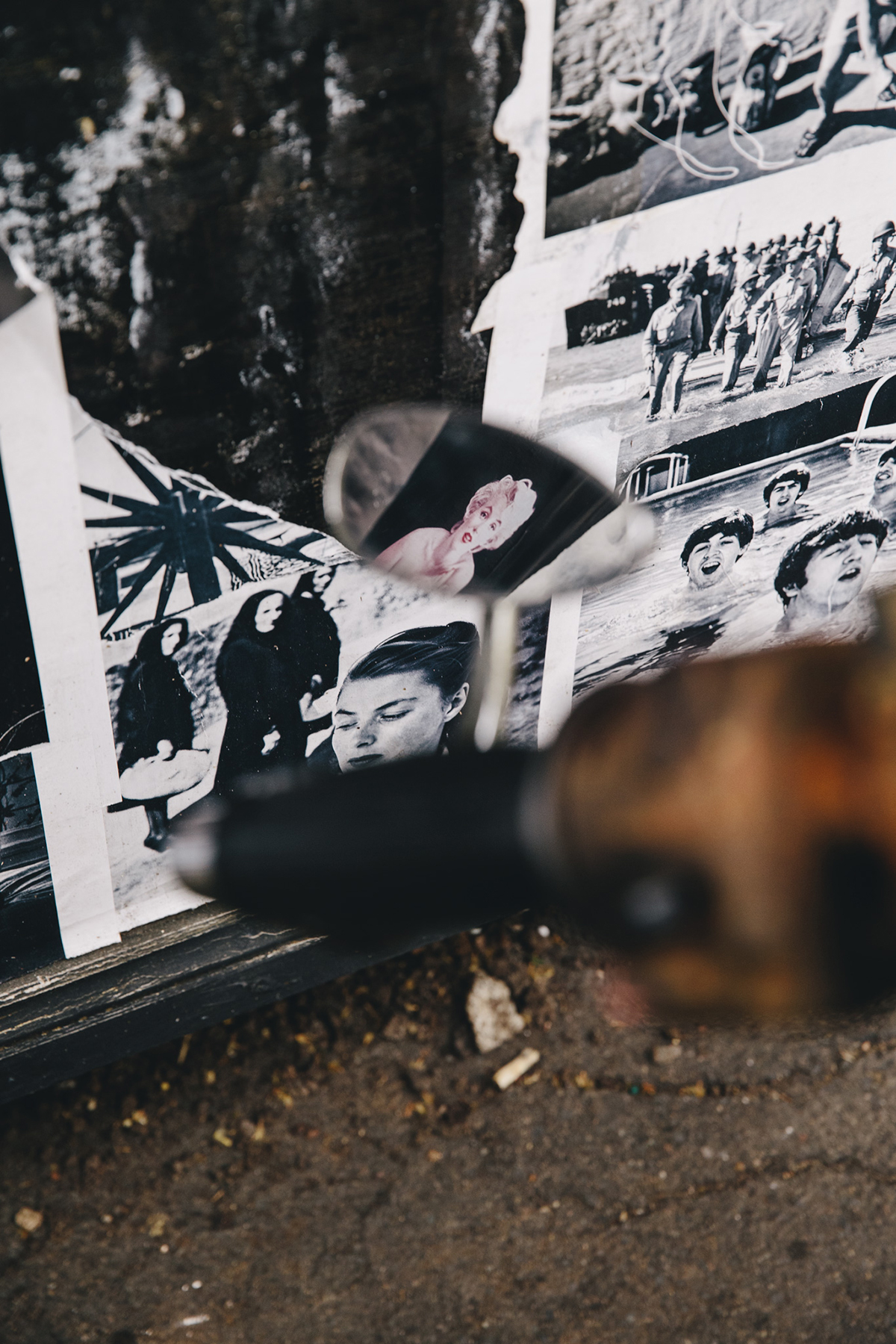 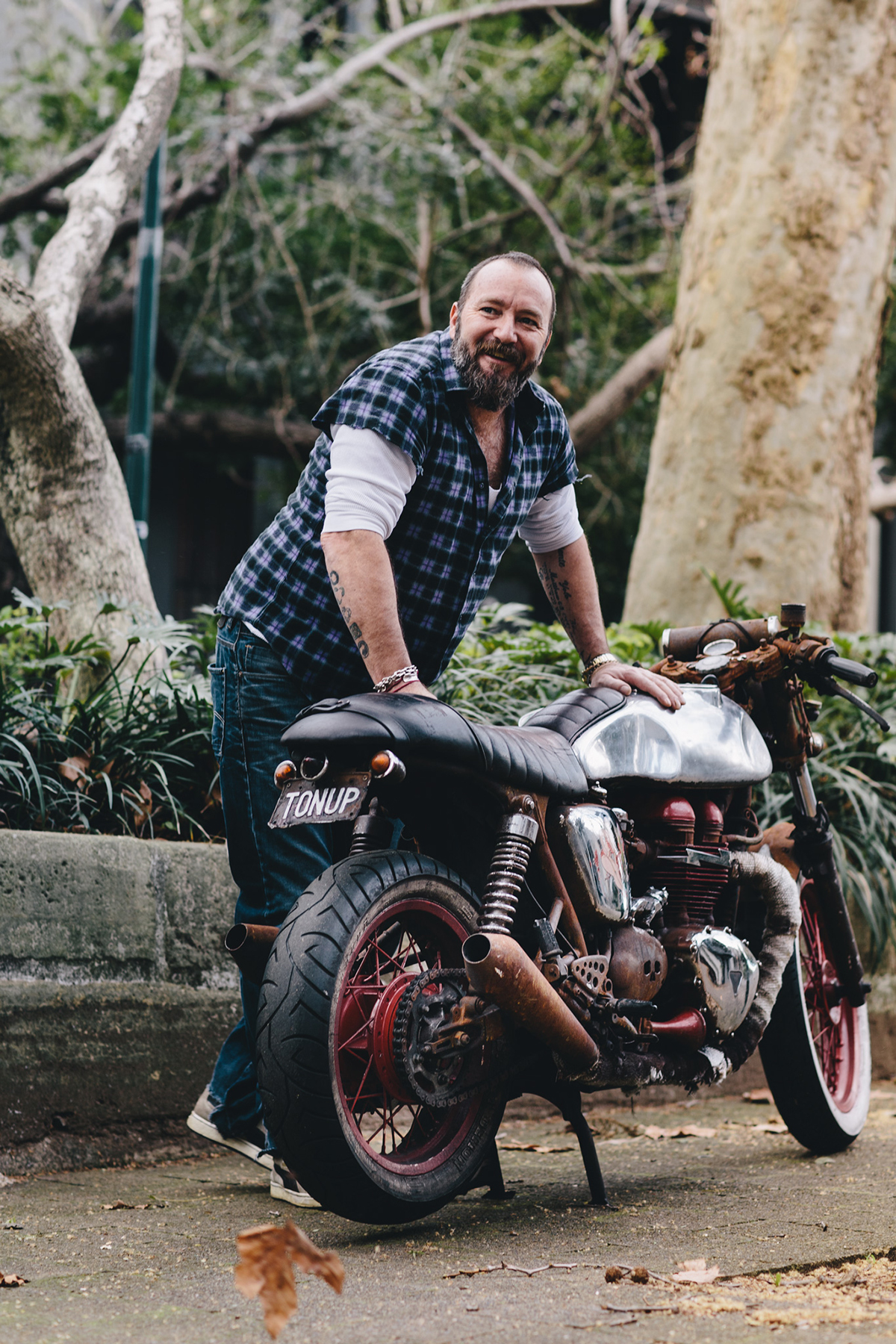 After picking up this 2008 Triumph Thruxton, Lucas began to draw inspiration from what his Grandfather would have done after the Second World War. “Buying stuff new back then just was not an option, so he made what he needed from what he had. It may not have been neat and tidy, but it did the job. He built some amazing mini bikes, so when I started this bike I wanted it to be reliable, easy to maintain and with minimal cleaning. It does resemble something that you might find in a Pickers barn, which reflects all the things I love about our country, it’s history, the people and their ingenuity. Making the most of what you got even if it was covered in rust.” 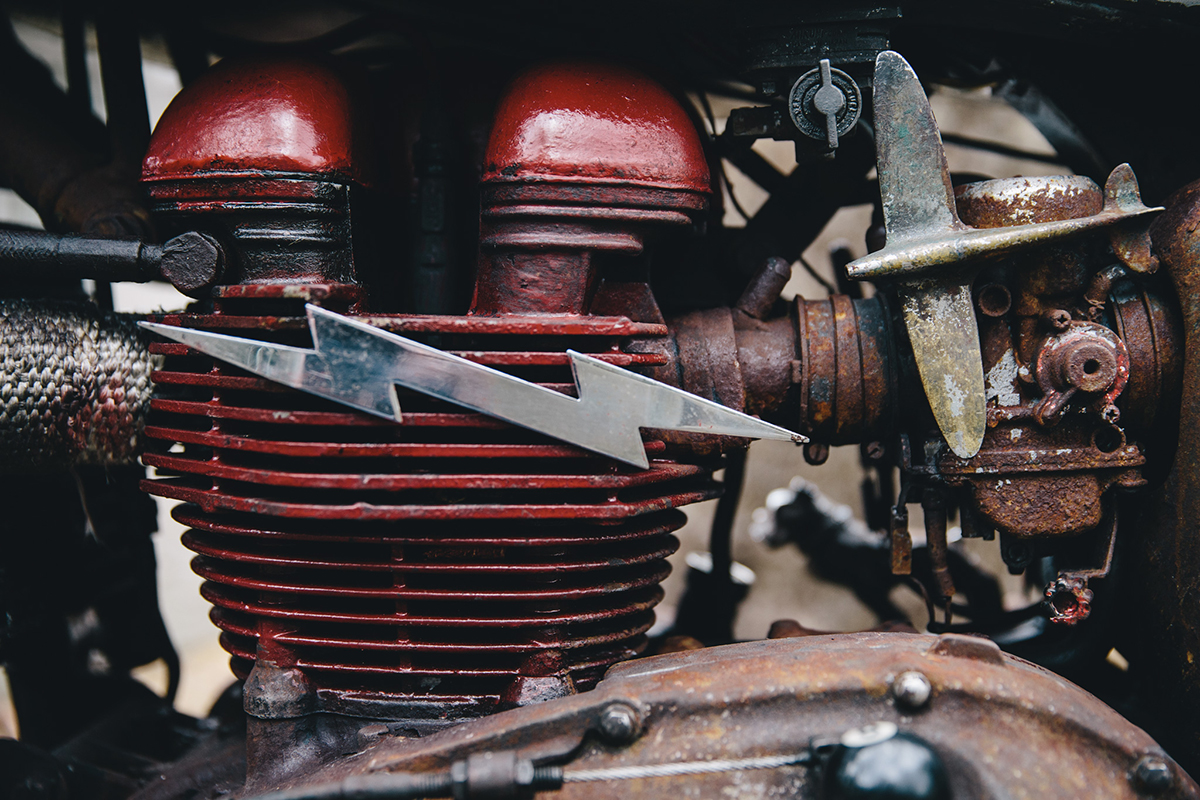 This bike is festooned with personal touches, which might not catch your eye first glance, but the more you pry and perve at the finer details the more you’ll find. Personal items from previous bikes and cars are jammed and hidden throughout, each serving it’s own purpose or telling it’s own story. “I had a hard time finding the fiddly choke knob that came stock on the bike, so I used my Grandfather’s trench art Spitfire plane.” 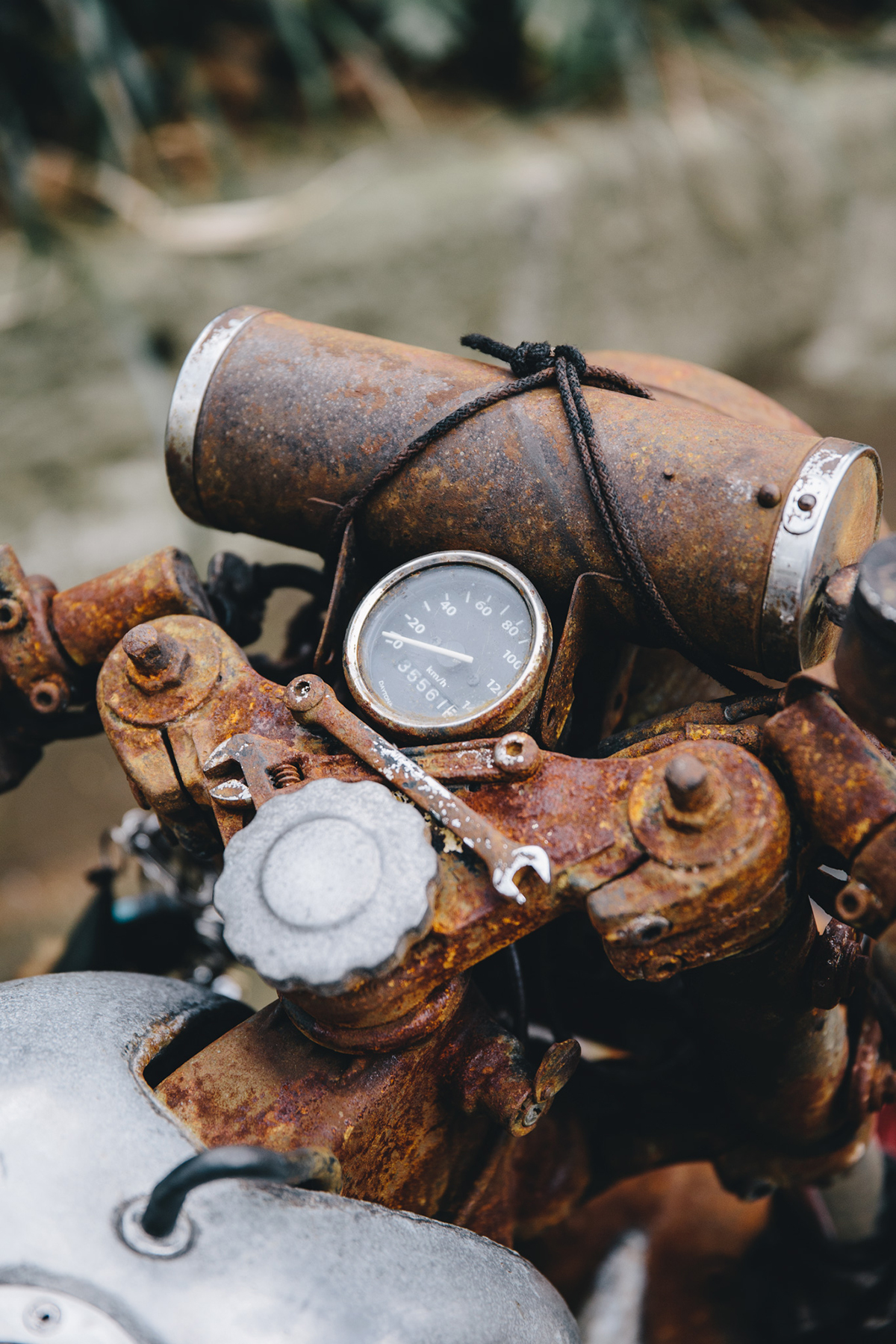 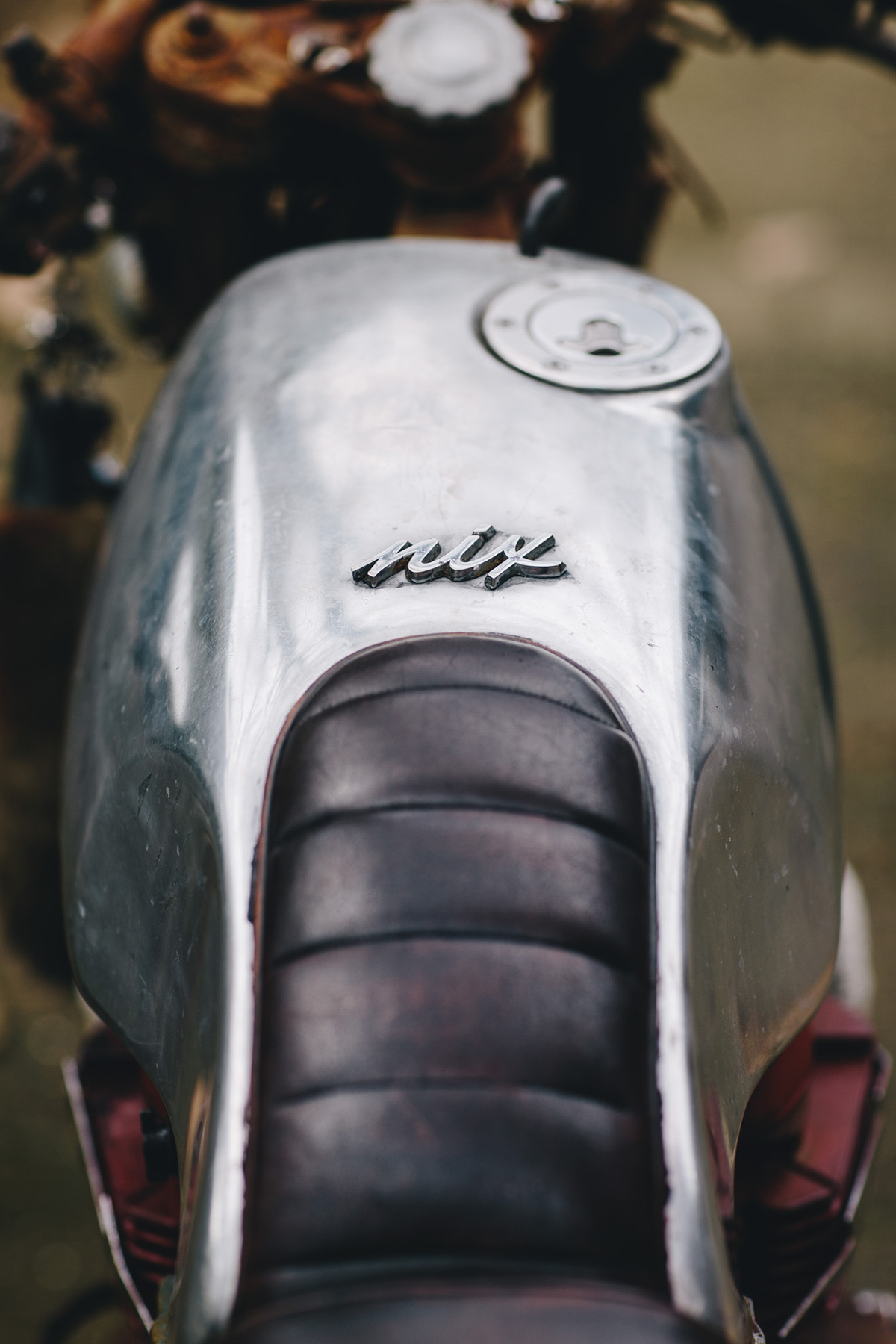 An exhaust horn originally from the 1950’s sits upon the clutch that wolf whistles with each gear change, adding an audible element to the already visually enriched machine. “I bought that horn in Tasmania whilst filming Aussie Pickers. I took everything off the bike and replaced the essentials with the best quality custom made items I could afford. I then added a few tool bags and Bob’s your uncle!” 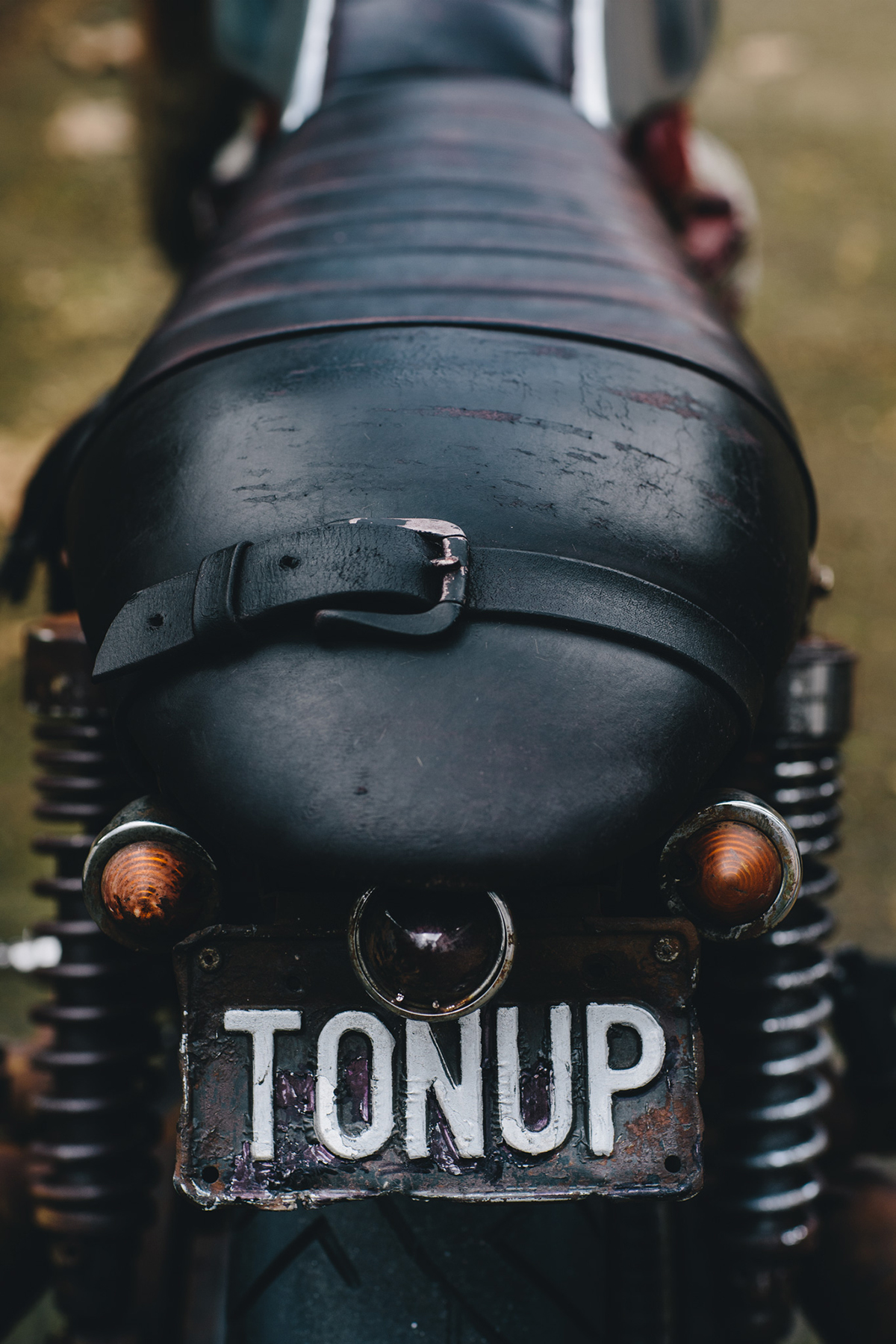 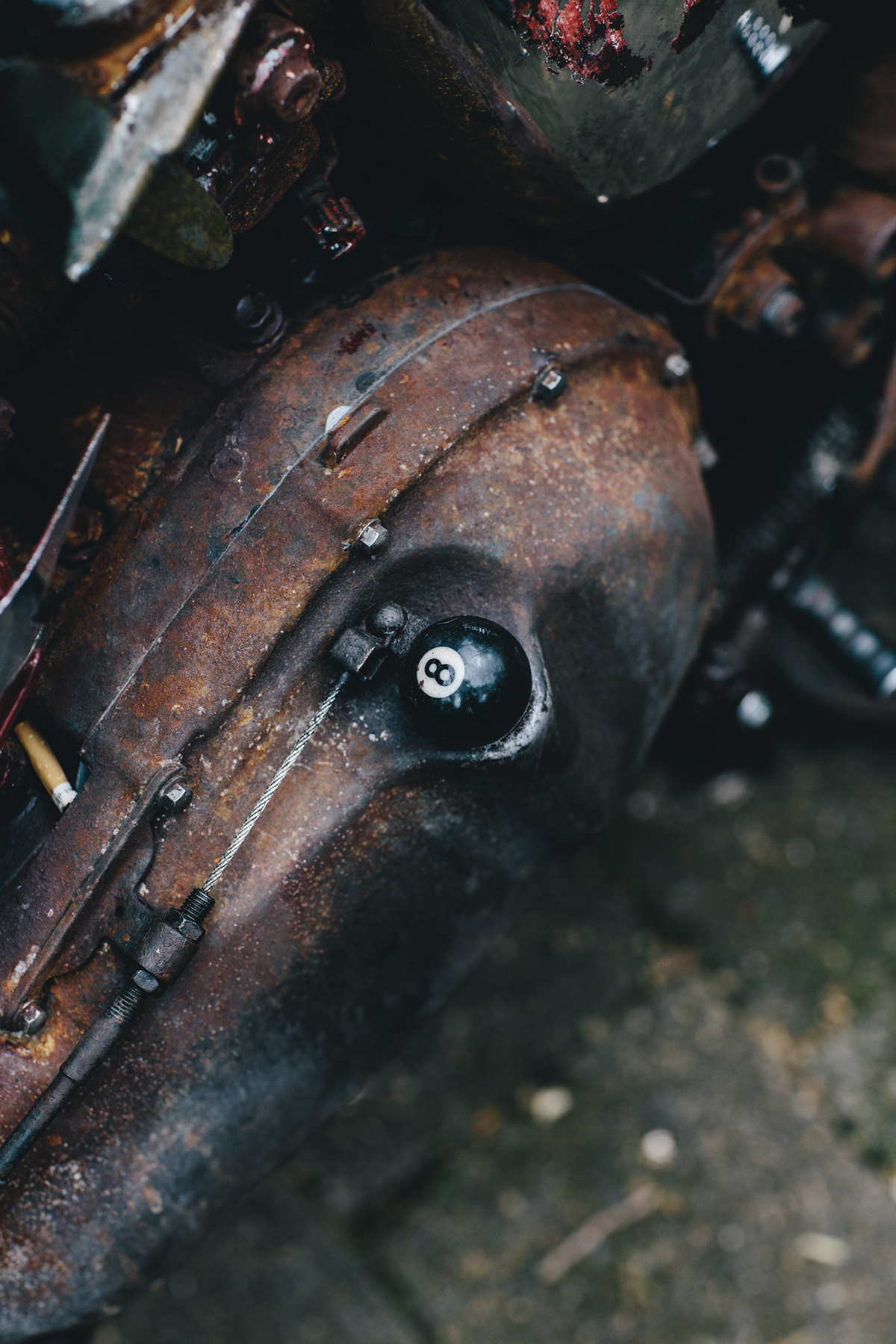 One of the most striking things about this bike you’ll notice is its intense rusted paintwork. This was something Lucas’ picked up working in the art department and set building. Exterior black house paint was mixed in with ground cork and steel filings, then sprayed with copper sulfate and mother nature did the rest. “For me, this have bee a fun build. Constantly adding little touches to achieve a true aged patina. 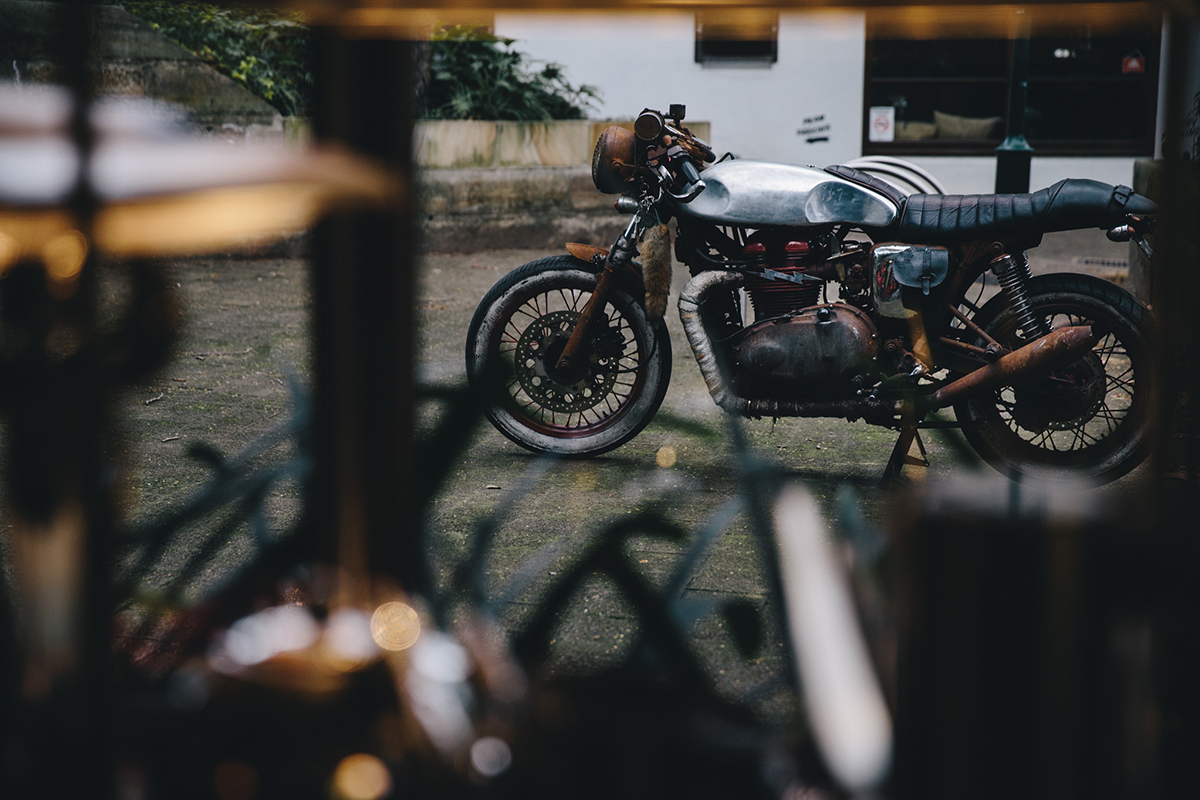