Why bother with two wheels when you can construct one bloody big one? That could have been part of Olly’s rationale when constructing his eclectic mono machine – or perhaps just a fair dosage of engineering madness. Regardless, it’s a the result of a hearty dose of skill, paired with the right amount of eccentricity. 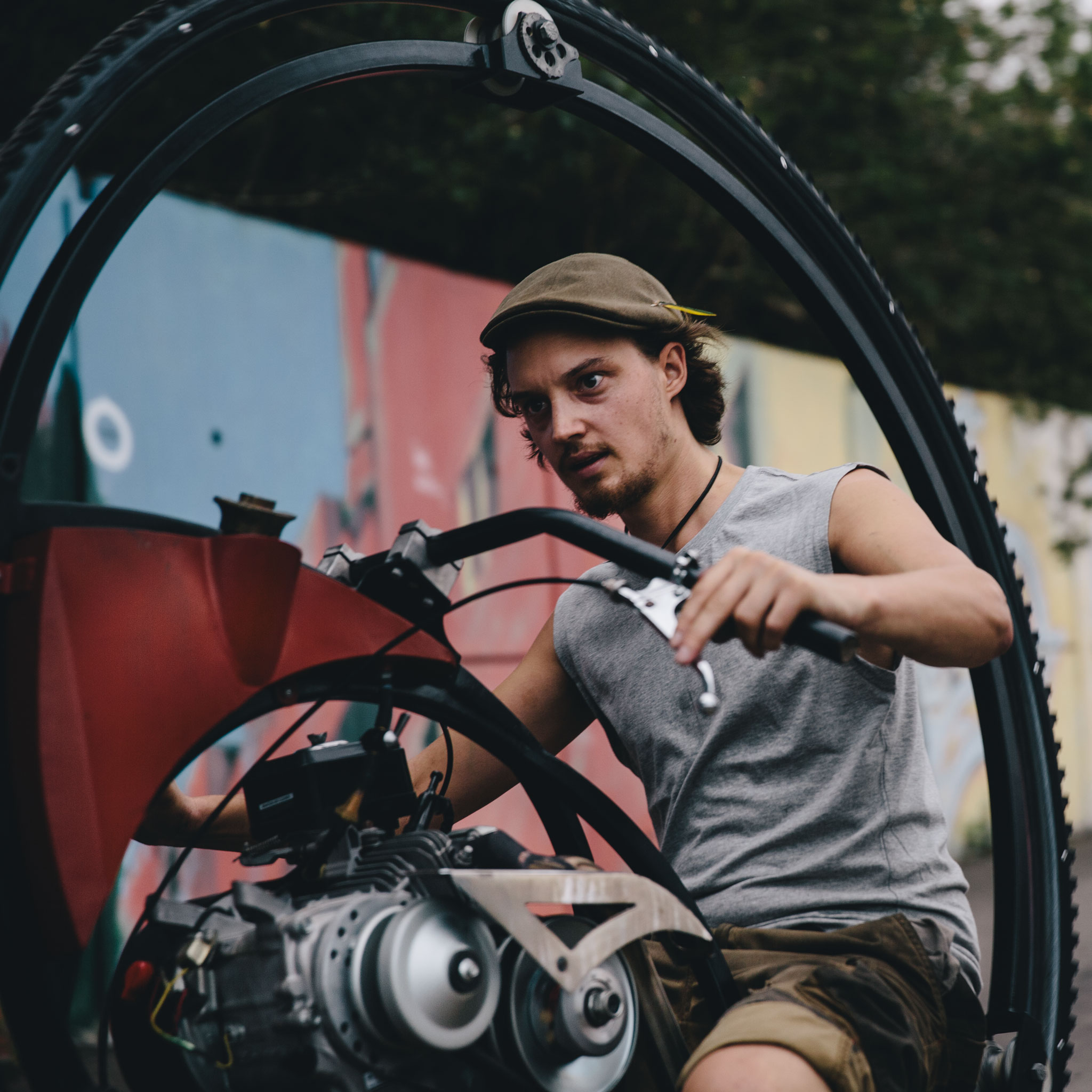 Monowheels first gained traction in the 1800’s, with patents being created for both hand-cranked and pedal-powered models. “What really flipped the switch for me was when I saw of a photo of one with an engine in it. Some other bright sparks didn’t just stop with internal combustion, but also propeller and steam powered ones.” 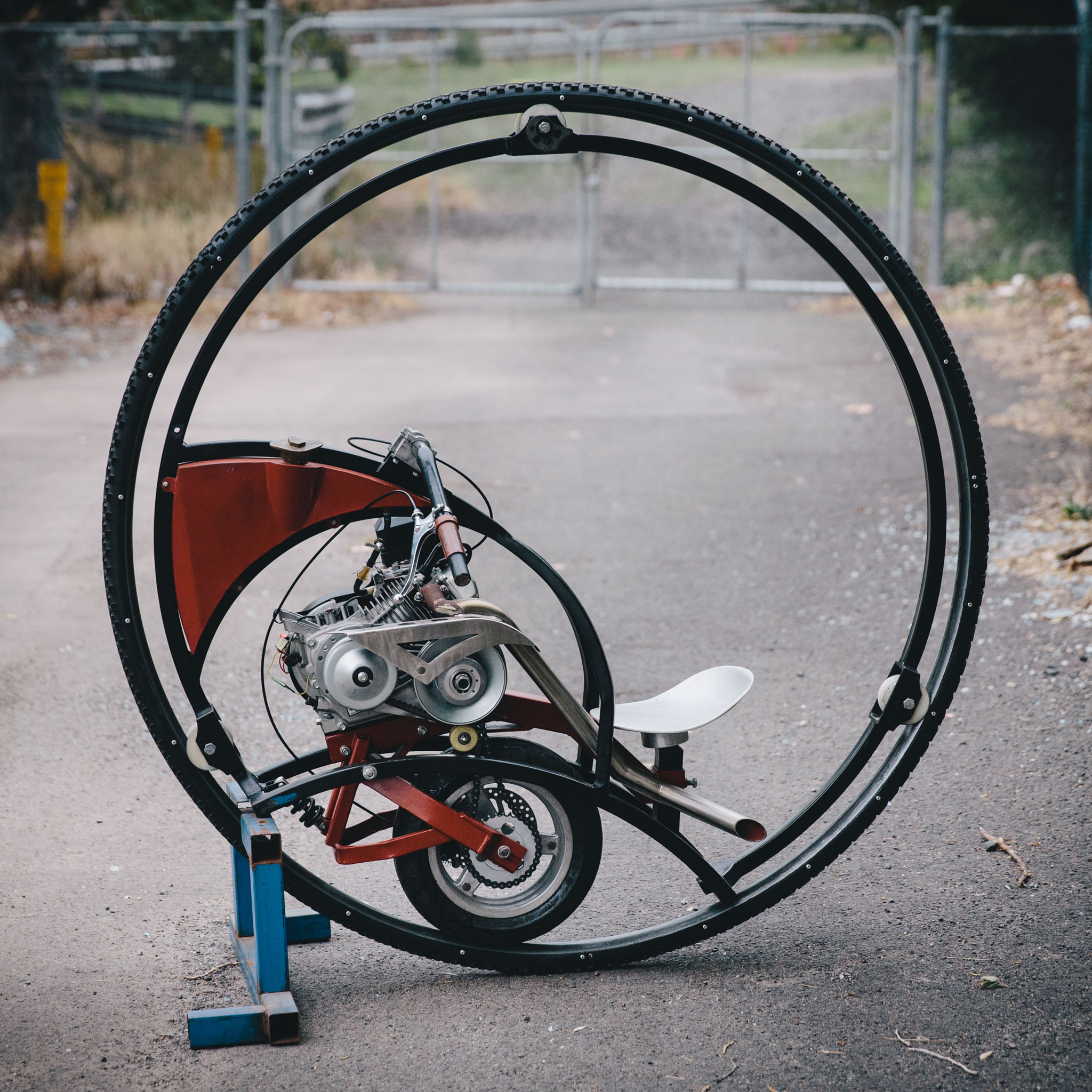 Despite being magnificent to look at and unique to ride, these single-wheeled contraptions fell out of favour in most (if not all) practical senses to machines with more than 1 wheel. Regardless, over the past century various incantations of these lonesome machines have been created across the globe. Now in the 21st century, Olly has made his mark in creating his own Monowheel machine. 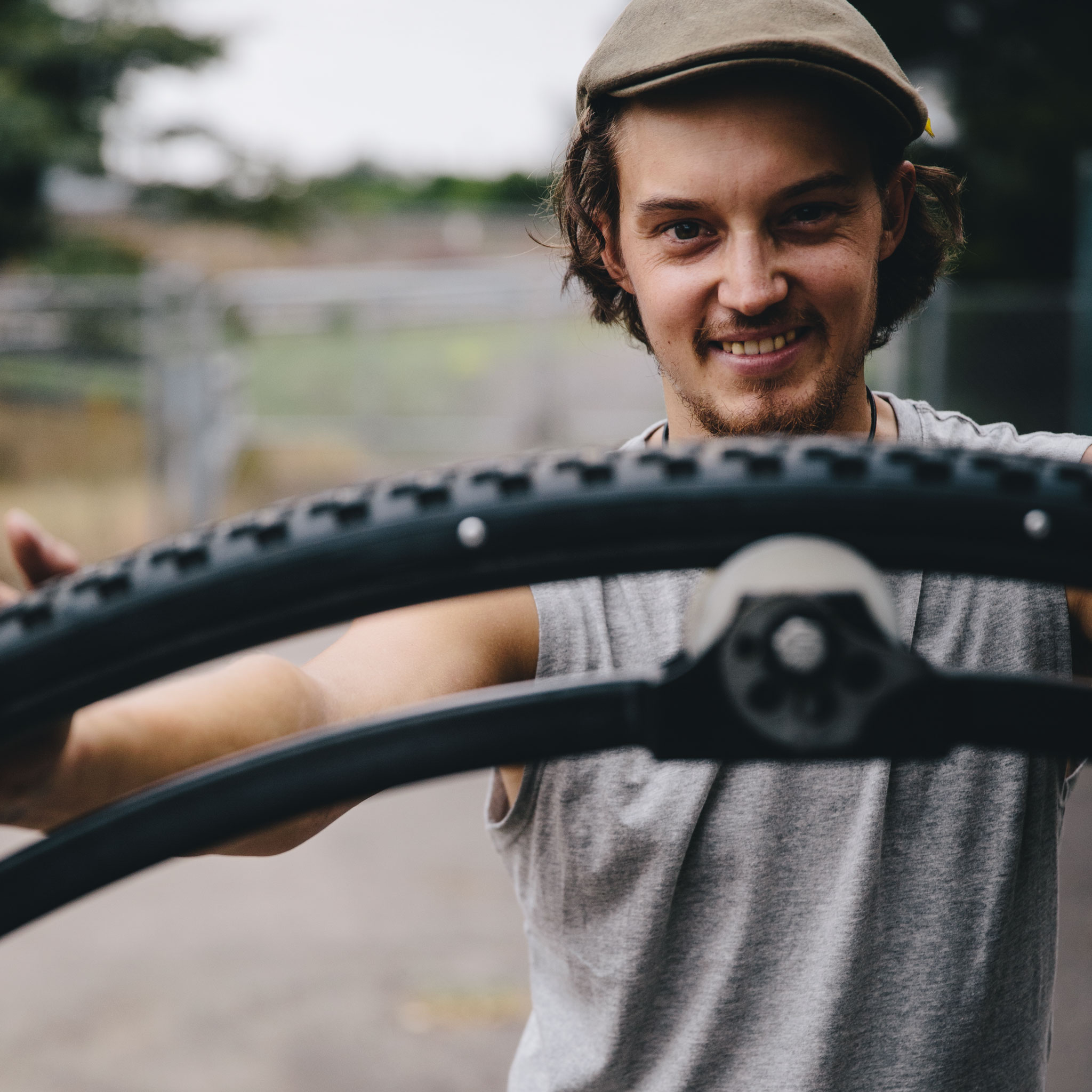 There’s been a hearty amount of Monowheel builds being taken on across the globe, and while each maintains the same basic principles that started these machines more modern technology is being combined, while each machine boasts the styling and creativity of it’s owner. 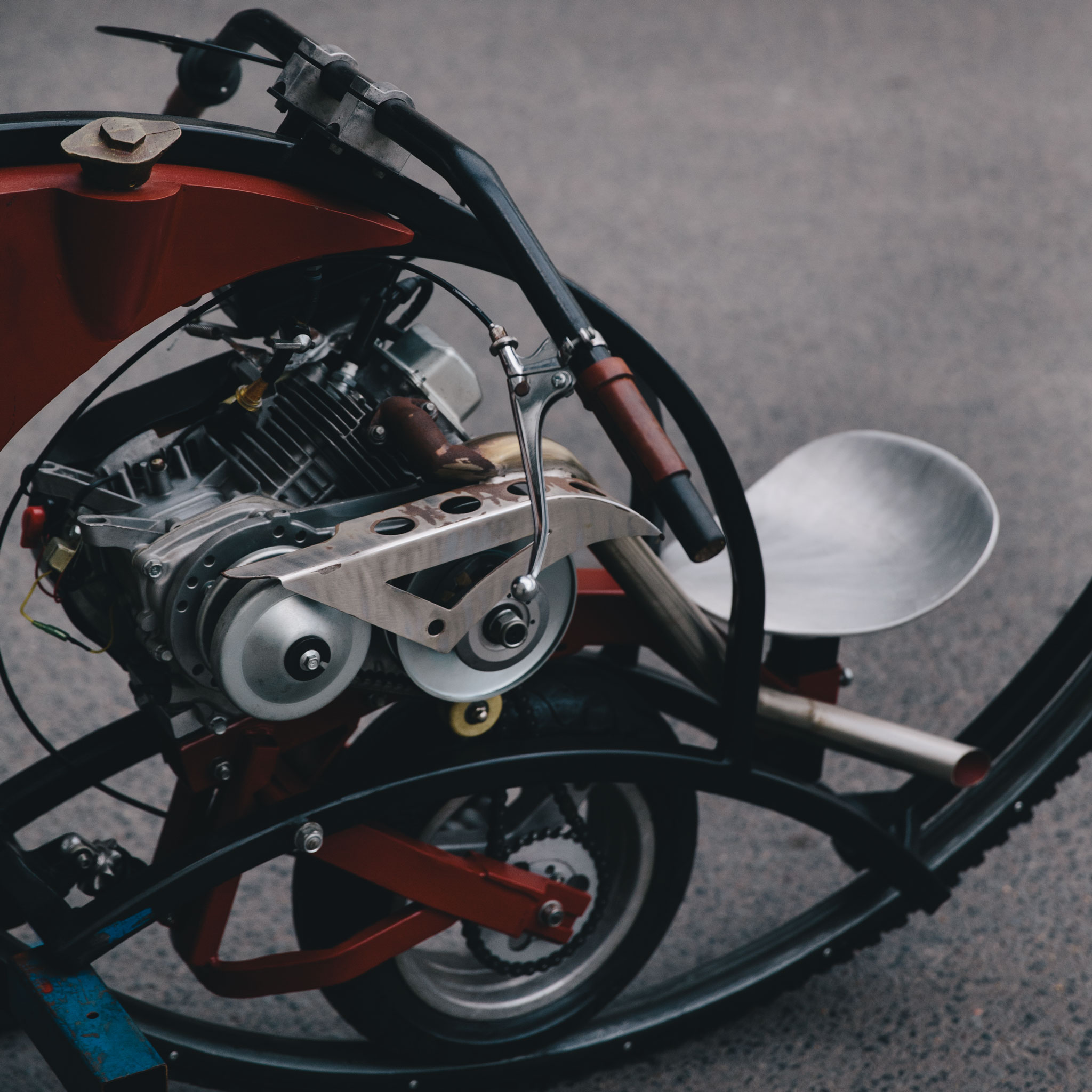 Being a blacksmith by trade gave Olly and advantage in this ambitious build as he applied his skills in traditional metalwork and modern architectural pieces to form the structure and fabricate the needed parts for the Mono. “I’d always planned on making this machine, but as usual life always got in the way. Soon after I came to Australia I happened across an amazing community workshop in Marrickville called Makerspace & Co. It’s basically a giant hub for creatives and those who either want to further their skills or learn new ones. After seeing the extensive workshops, I couldn’t do anything but get involved.” 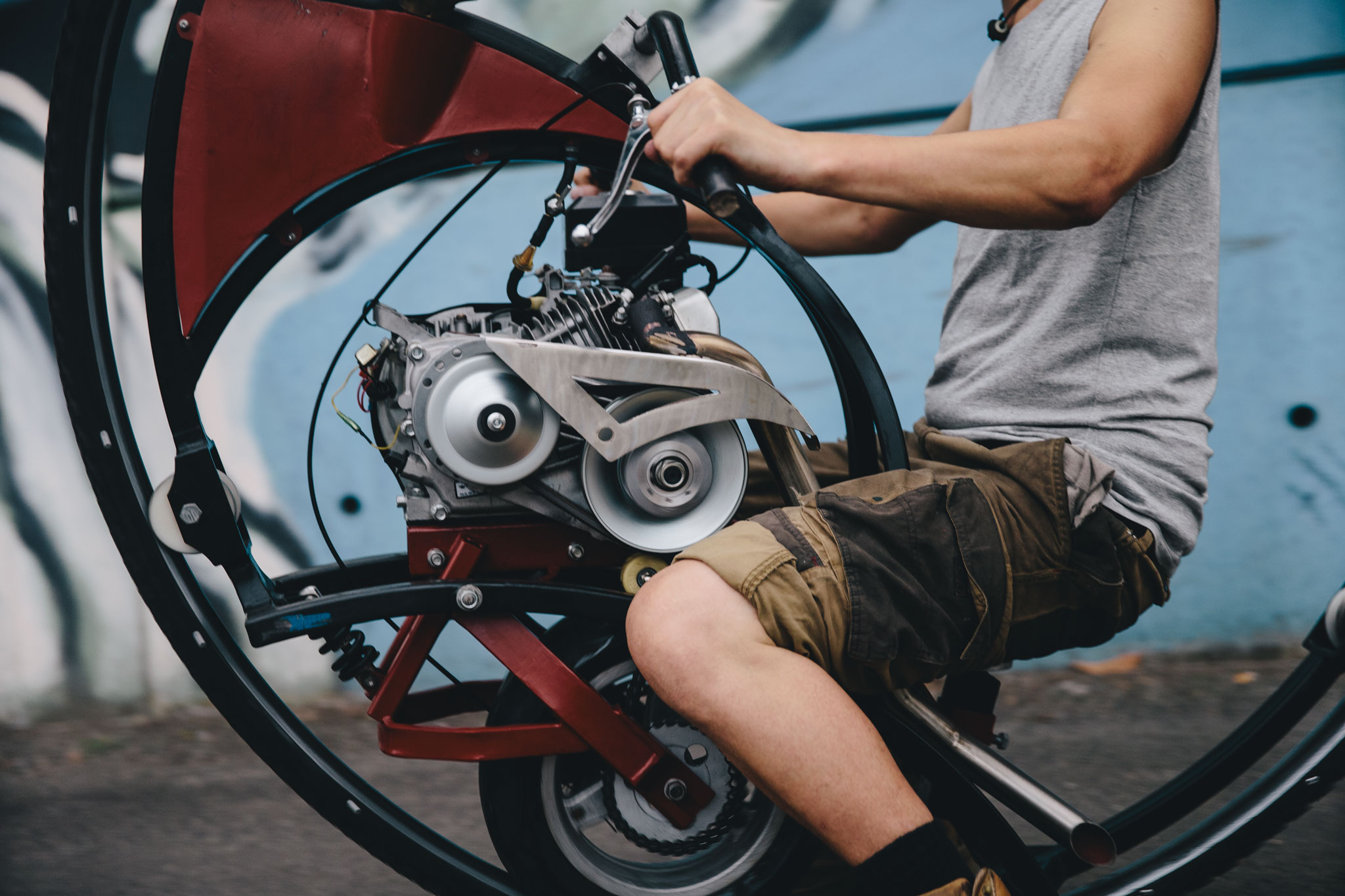 By now Olly had amassed a library of reference images of builds from across the globe, along with picking the minds of fellow enthusiasts. “Unfortunately there were never any downloadable designs or anything specific for me to go off. This lead me to set about coming up with my own design, with plenty of tweaking of course along the way. To be honest, I just started to build the bloody thing – there were a few hiccups and design changes of course, but in the image I had initially in my head translated well into a physical machine.” 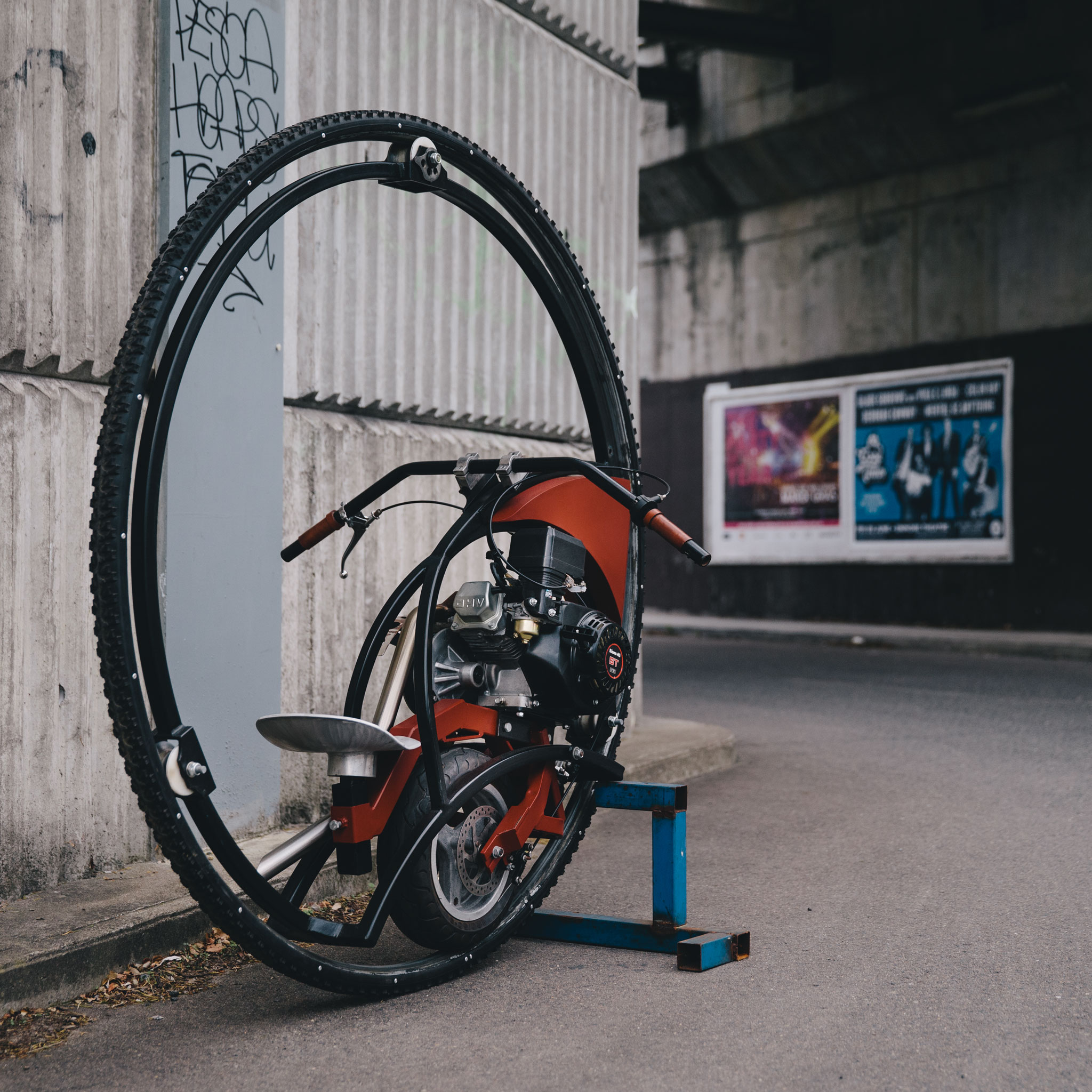 The vast majority of this machine was hand fabricated by Olly, making good use of all the tools available at the Makerspace & Co workshop. “The engine was just a cheap $70 off eBay that I purchased brand new. I picked up on it from some of the Go-Kart boys who let me on a few tricks that can be done with them. I recruited some parts from a pocket rocket bike, heavily modifying the swing arm and drive wheel so that they could be adapted to this machine correctly. To add extra grip and stability I riveted enough bicycle tyres together to accommodate the much larger wheel size.” 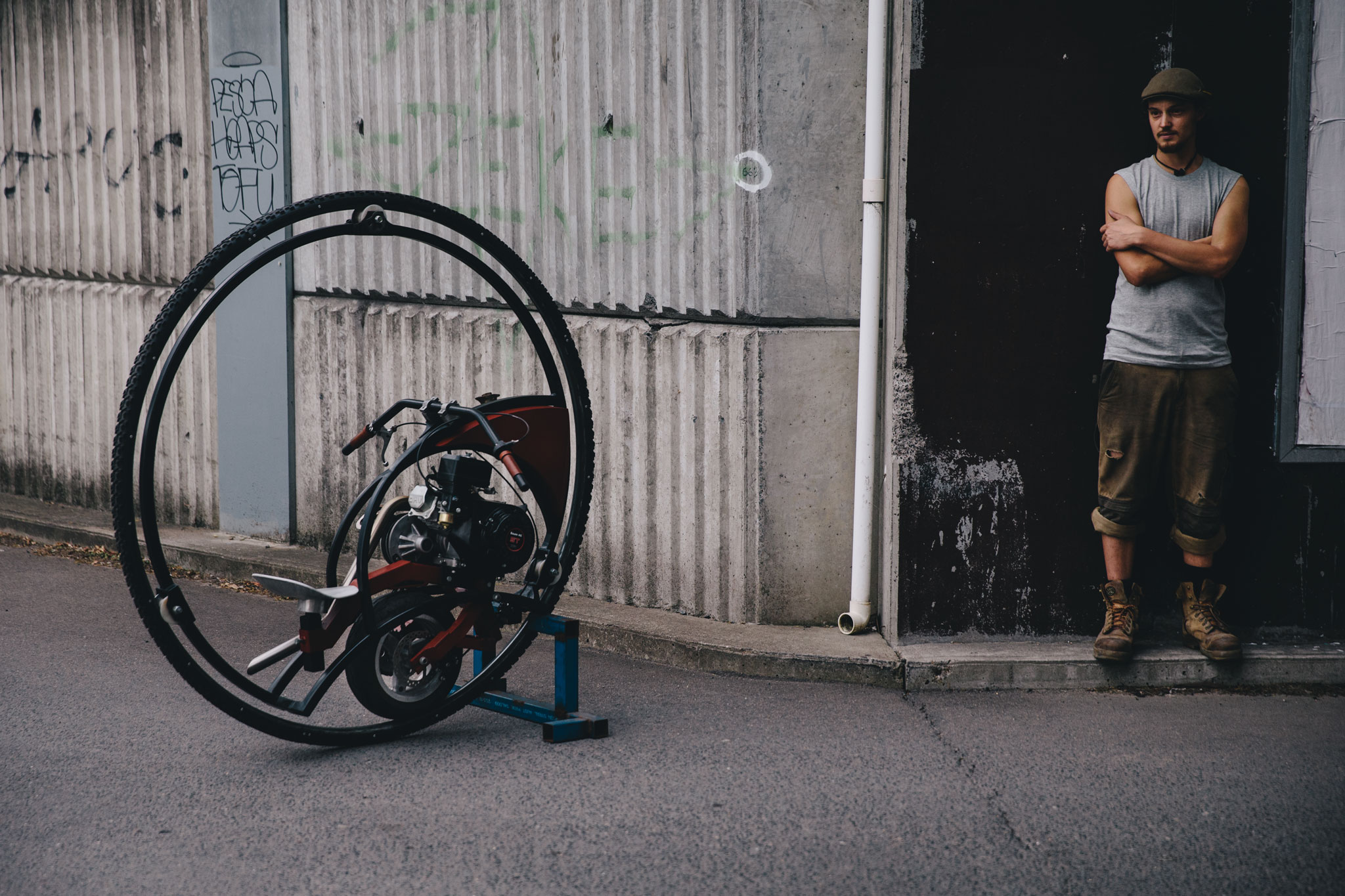 Designing and building one of these machines is a task unto itself, but there would be yet another adventure into foreign lands; riding the damn thing. “I’d never ridden one before, but am a confident motorcycle rider. How different could it be?! When I swung my leg over the machine for the first time I suddenly started thinking “What the fuck am I doing?” happily enough though I lived to tell the tail, and despite a few minor adjustments the riding position goes pretty well.” Riding a contraption such as this lends whole knew disciplines to riding, as you manage to wrangle the weight distribution, leaning, and throttle control to create balance. 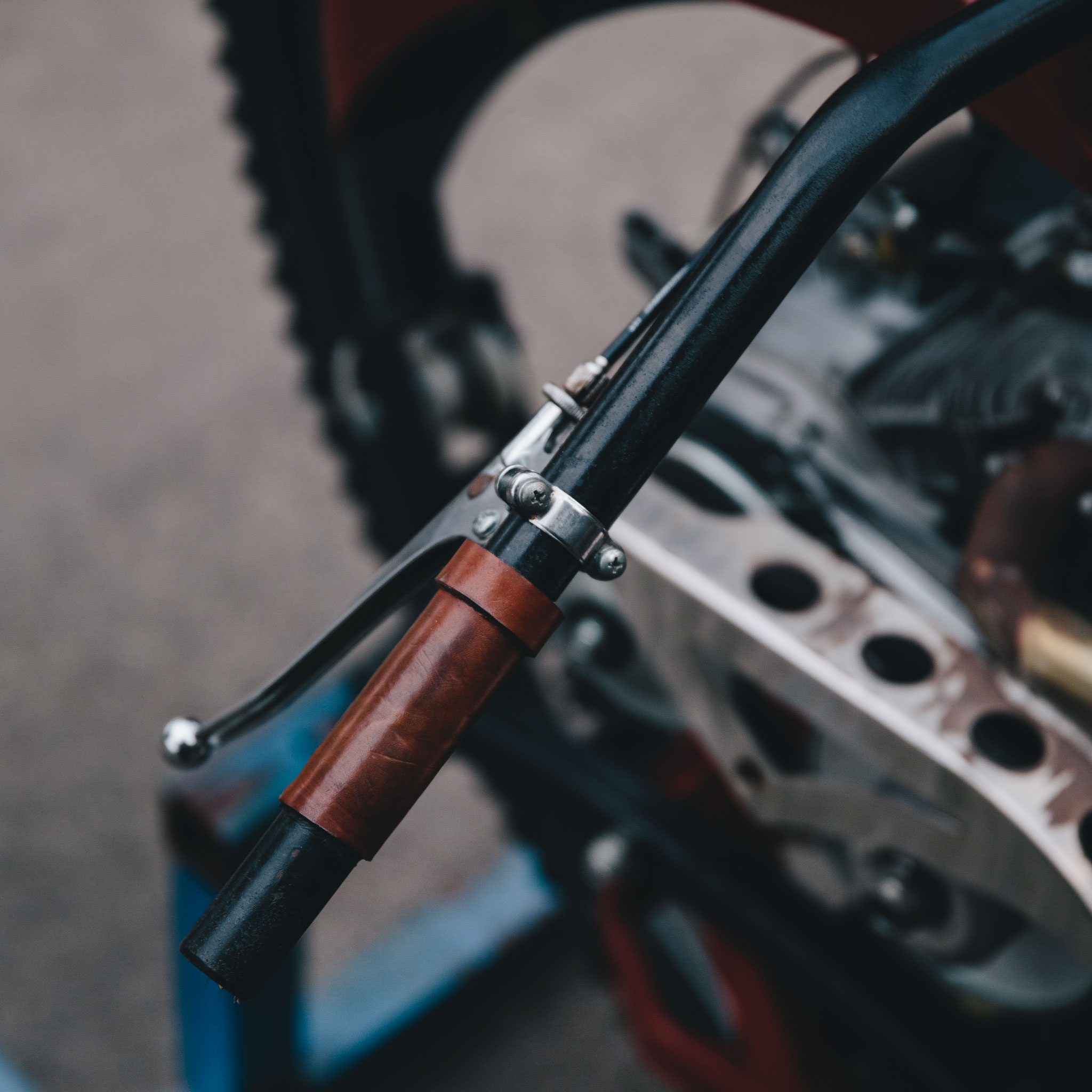 Now that this engineering dream has been completed, a mad glint in Olly’s eye suggests this certainly will not be the last unique build to come. “I’m currently looking at doing something with a pulse jet engine in the future, and have plenty of other whacky things forming in my head…” 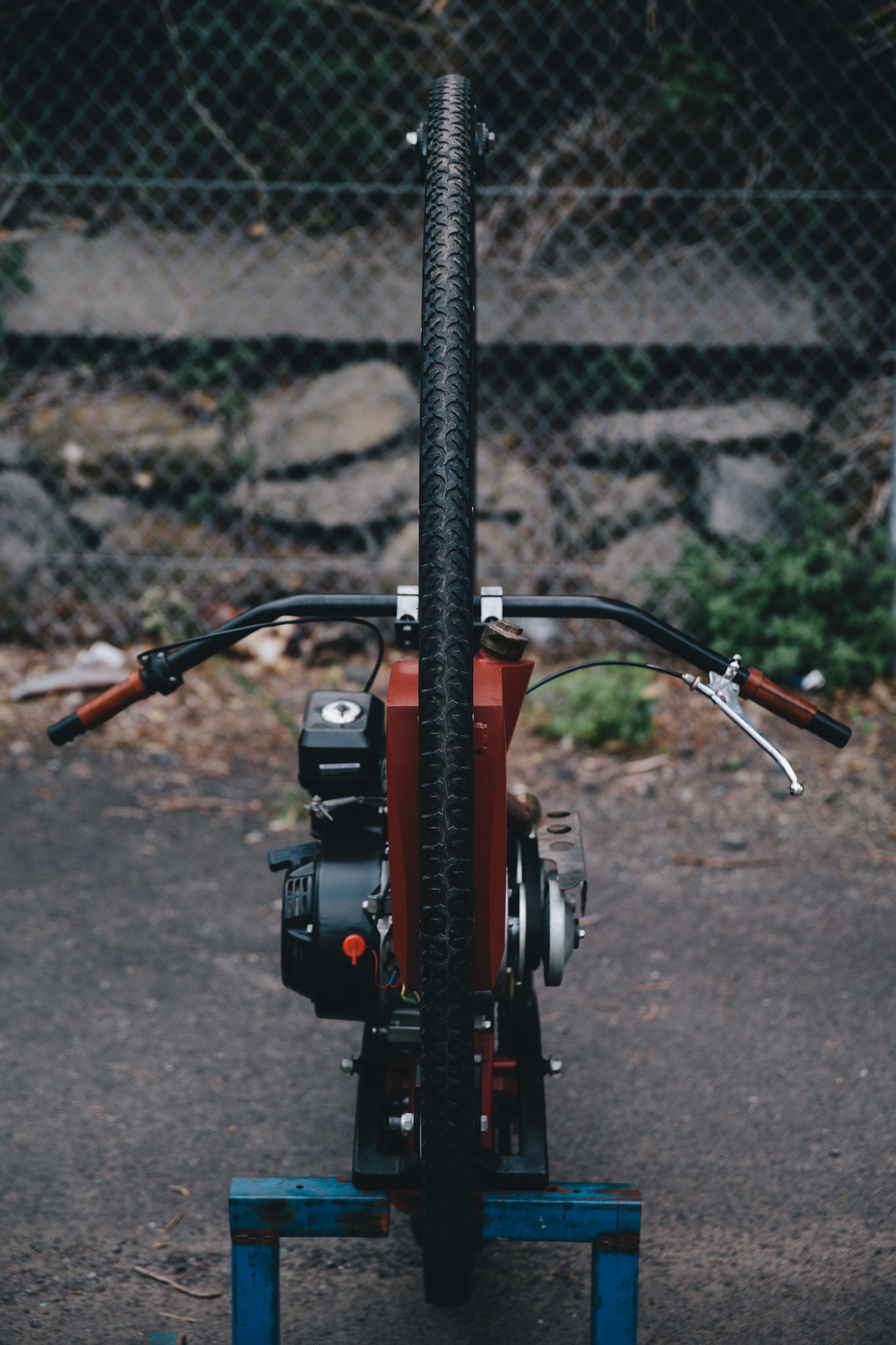 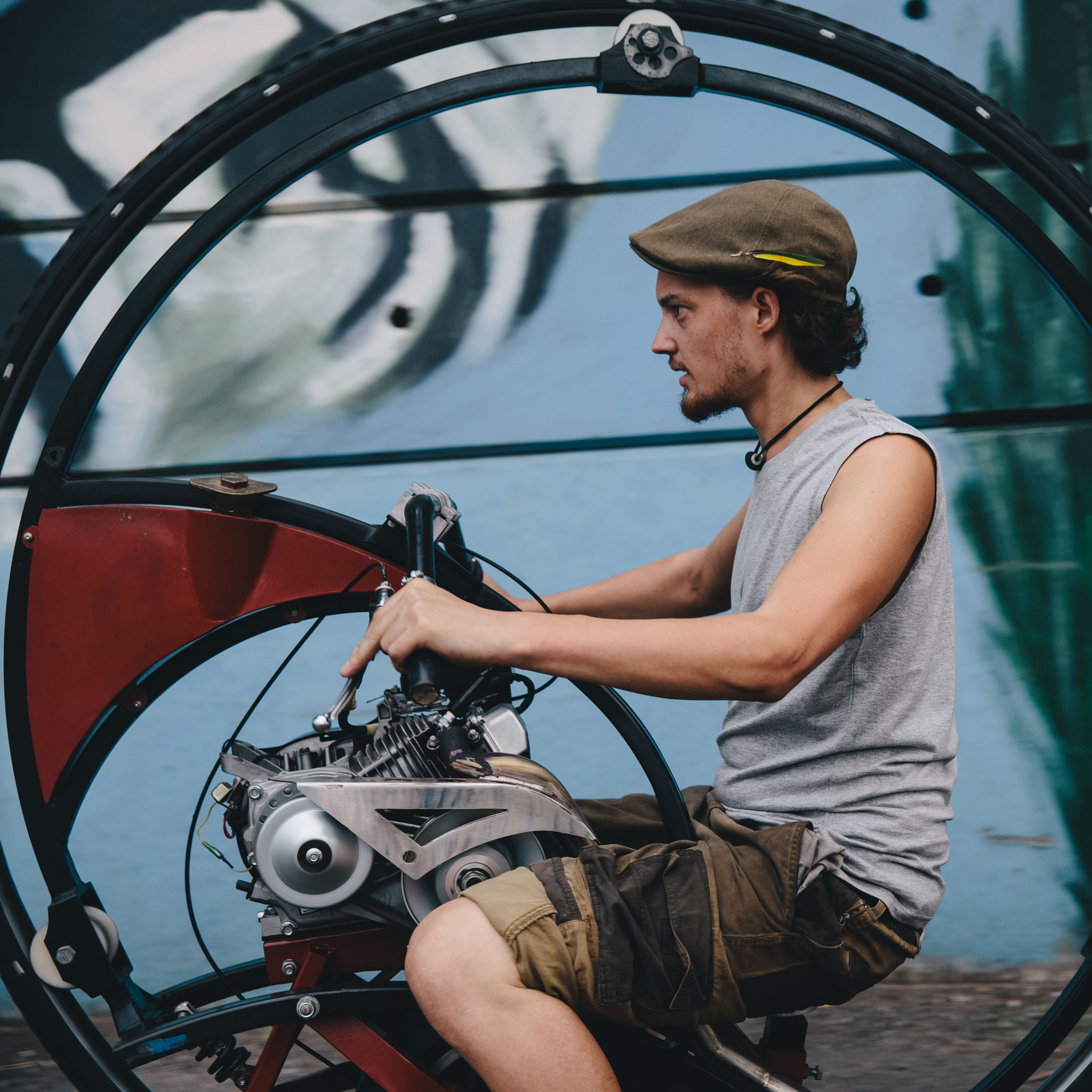 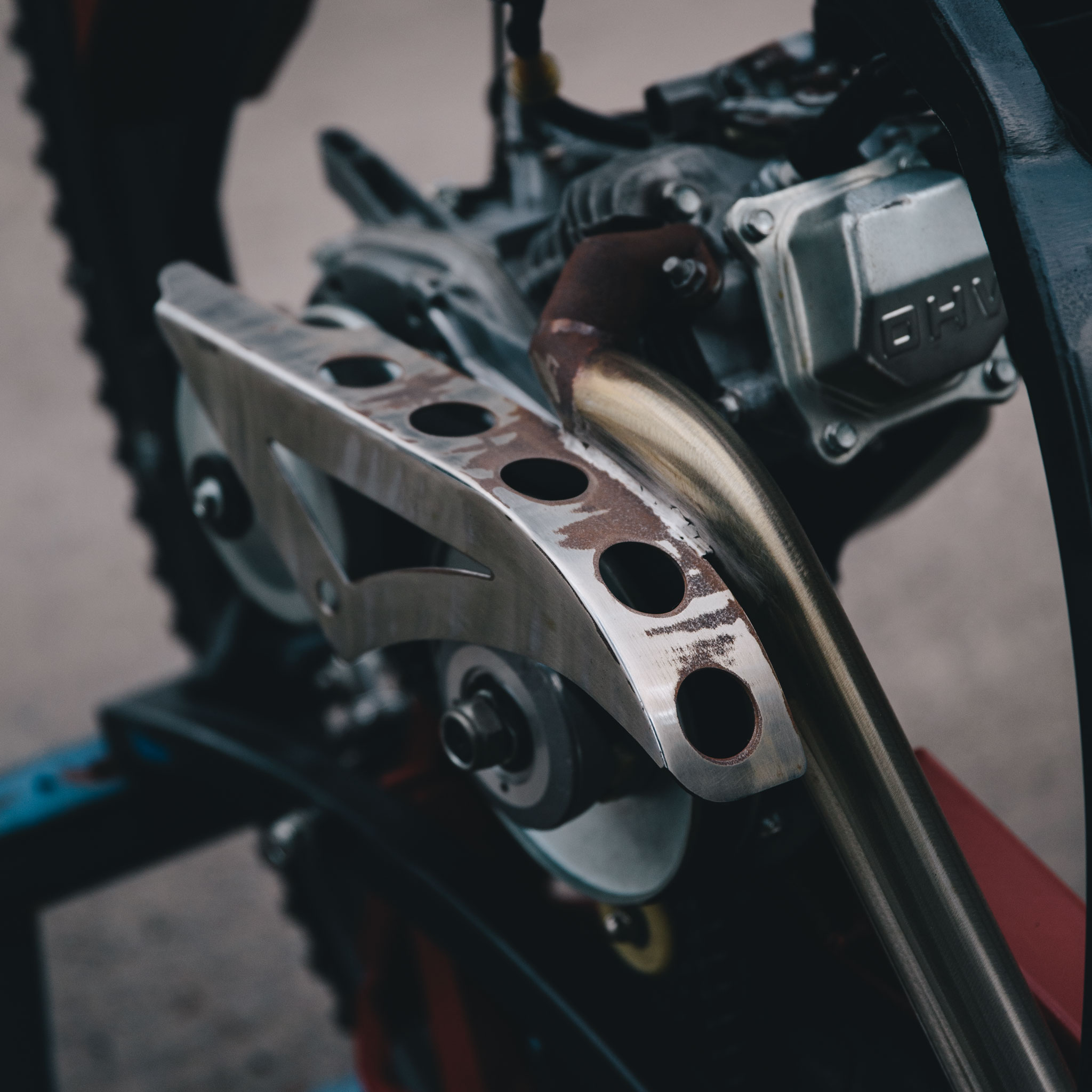 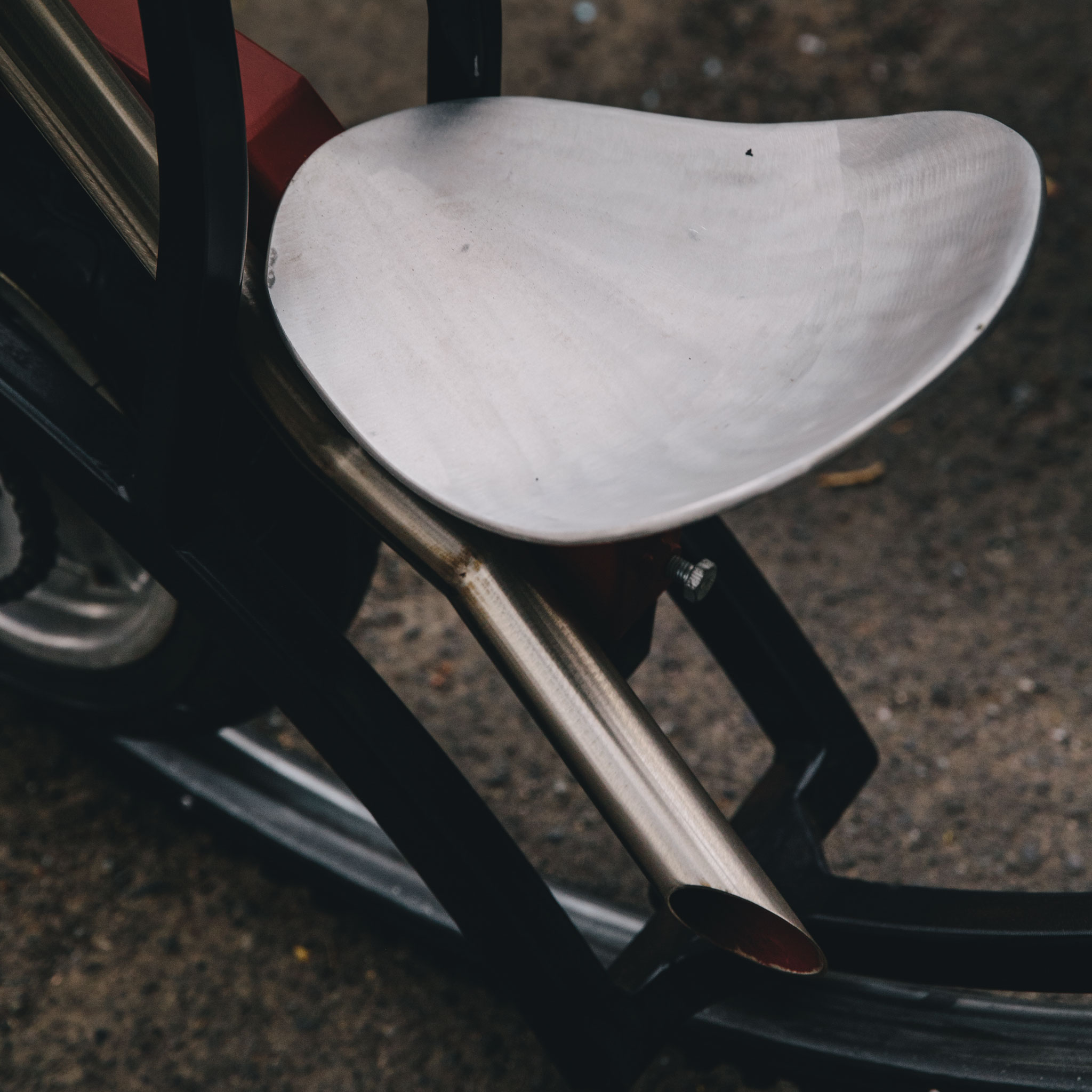 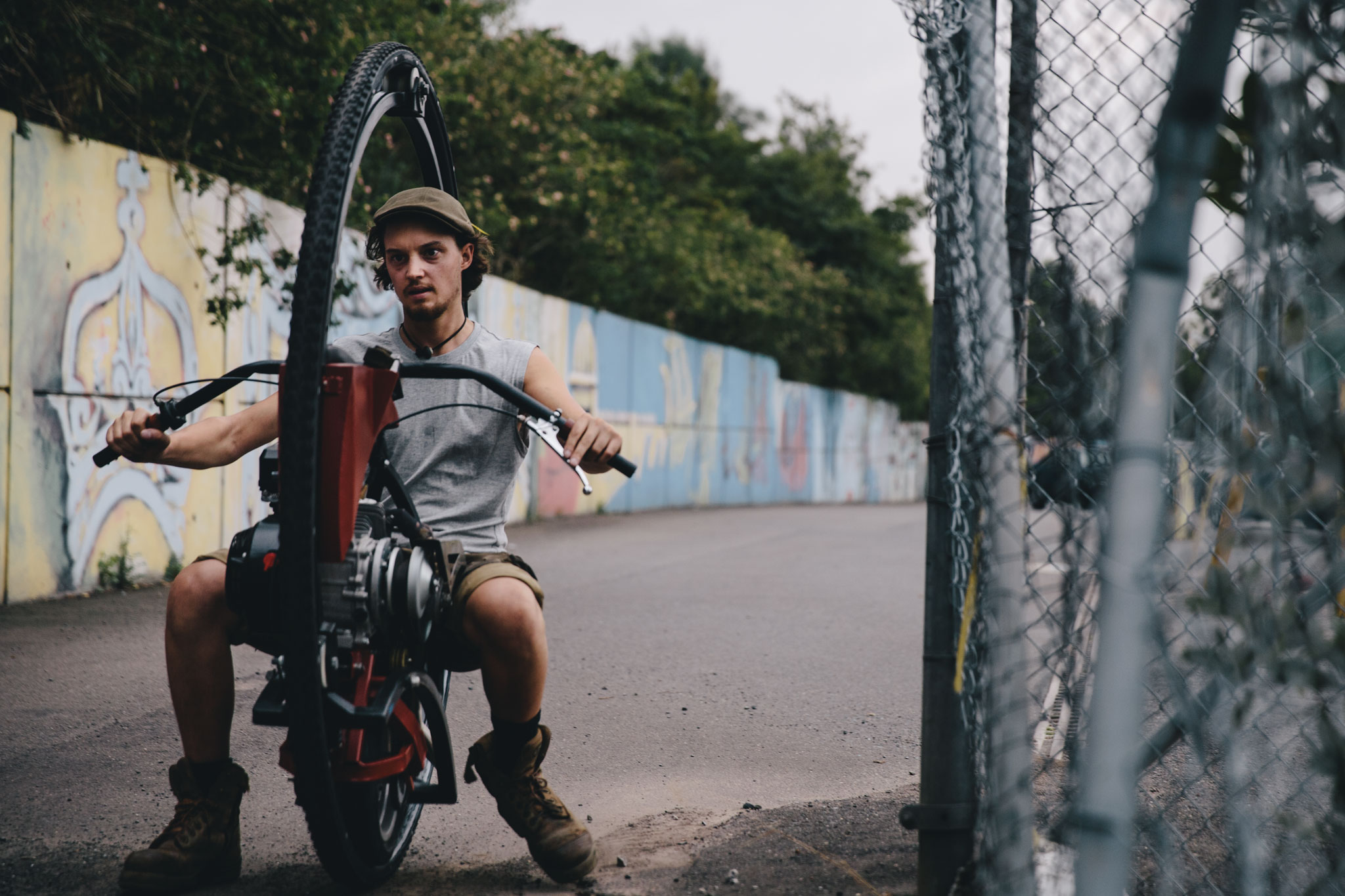 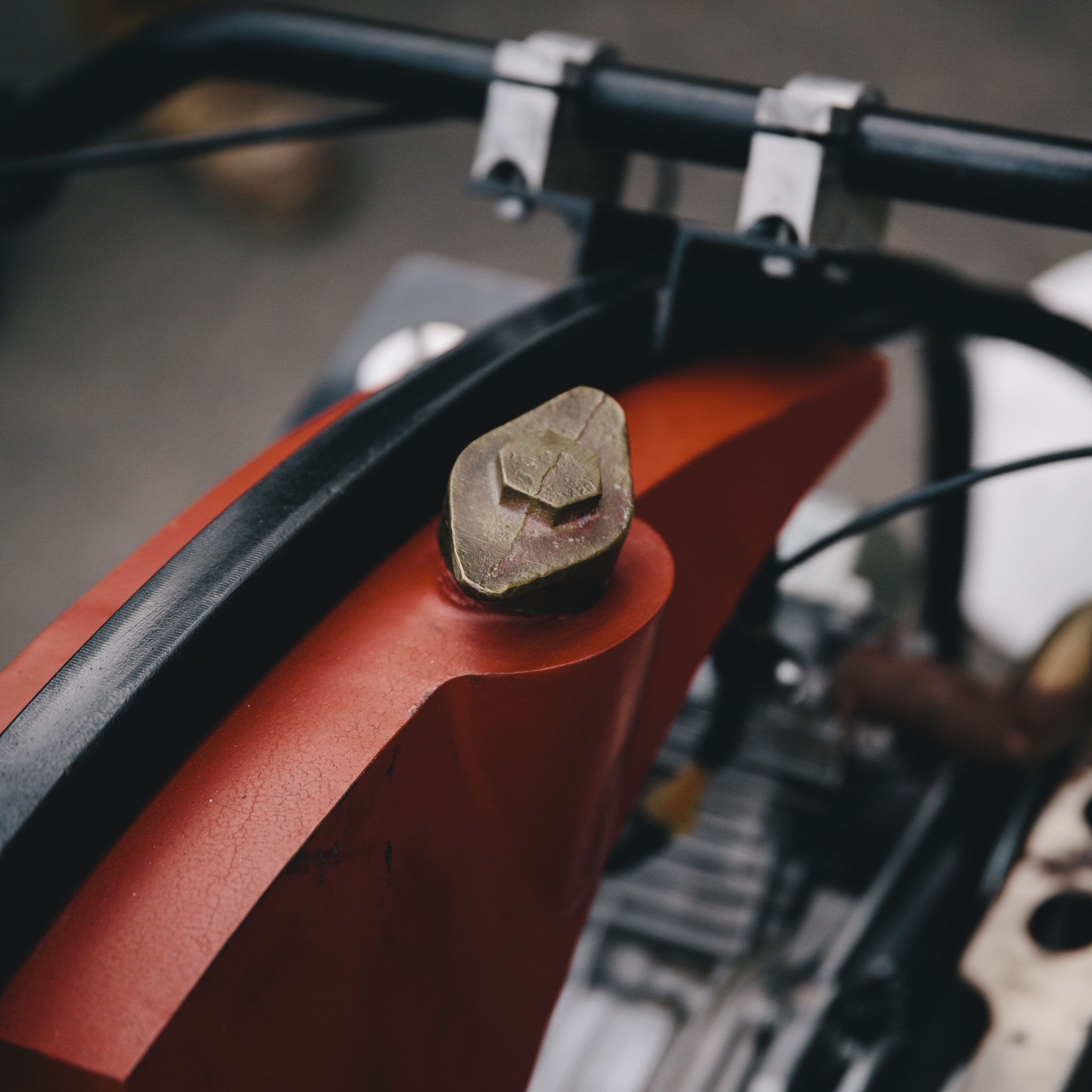 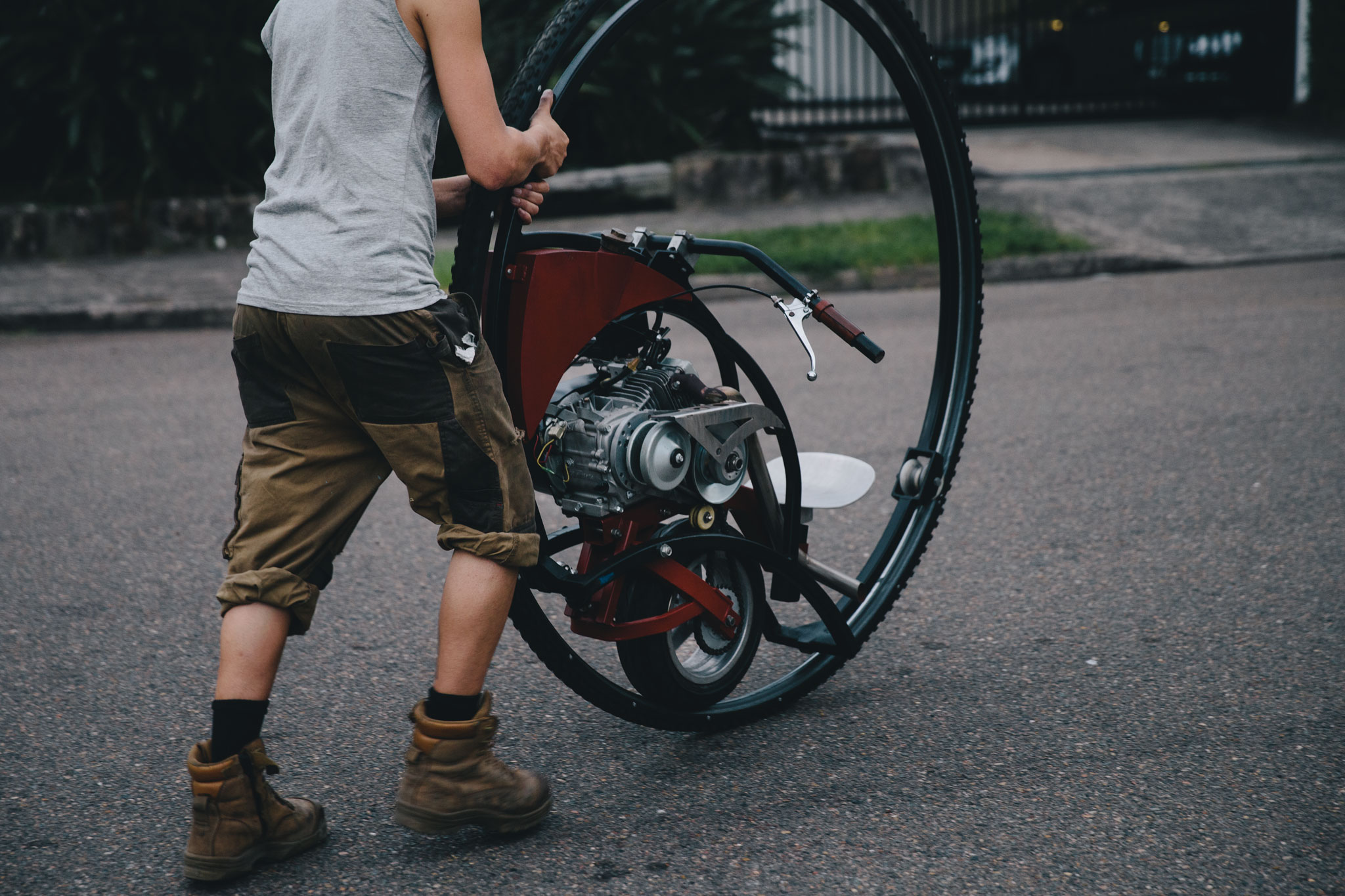 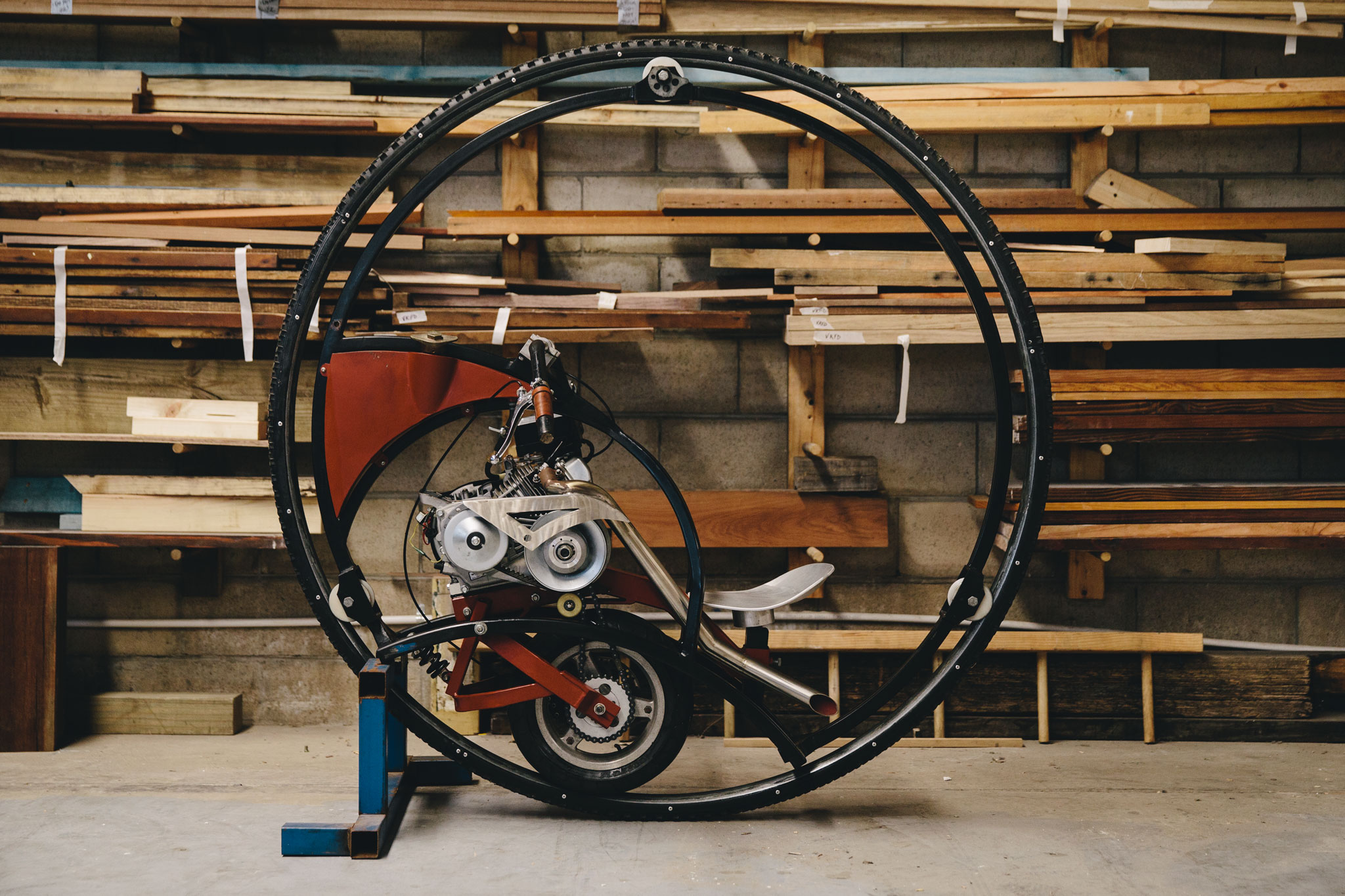