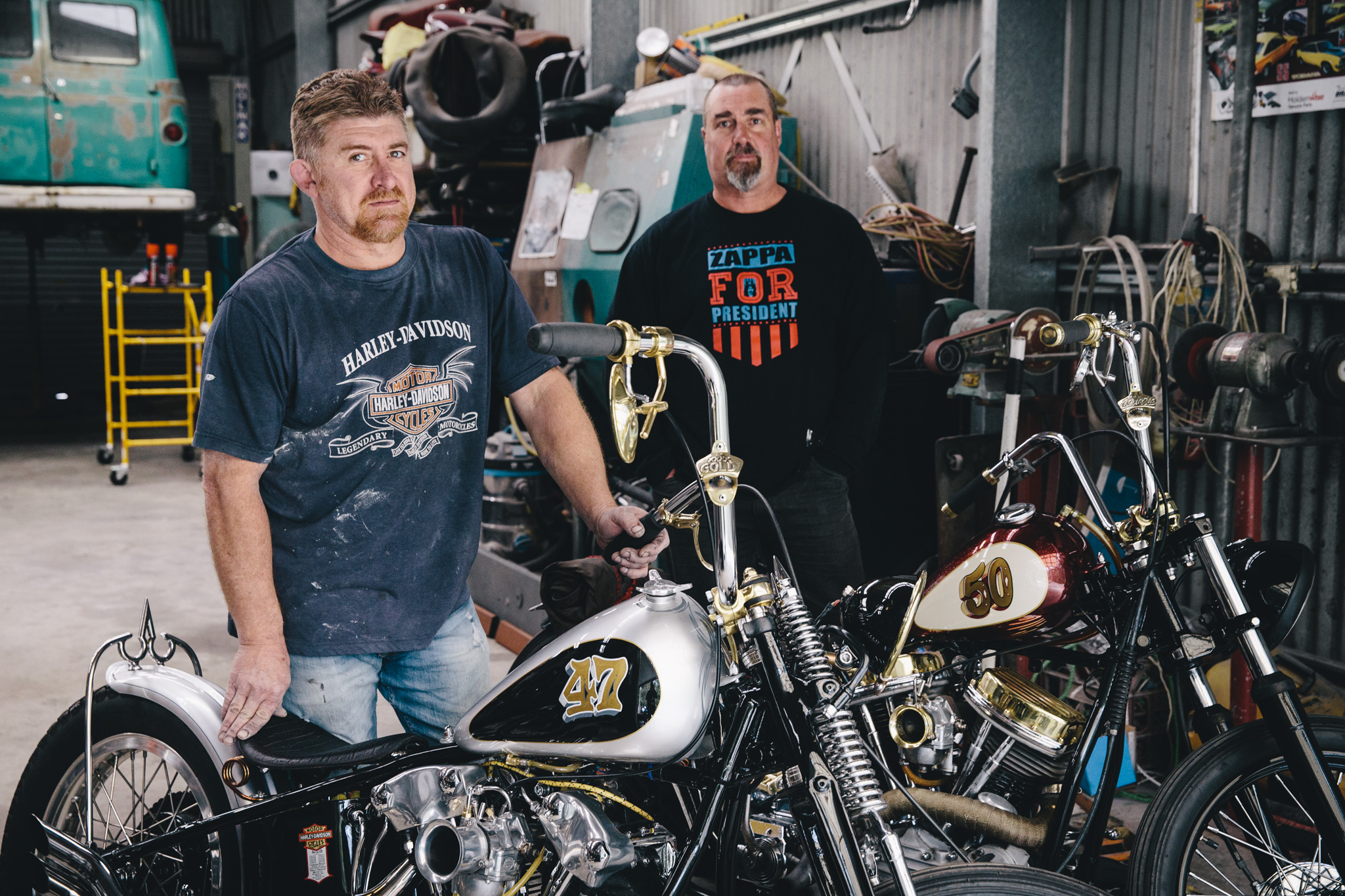 Most commonly known as “The Shed”, this is a hallowed and holy place of worship to the machine Gods; a shelter for the lost and misguided. Here, motorcycle and machine nuts can find refuge from judging eyes and nagging significant others to perfect their builds, and probably hangovers. 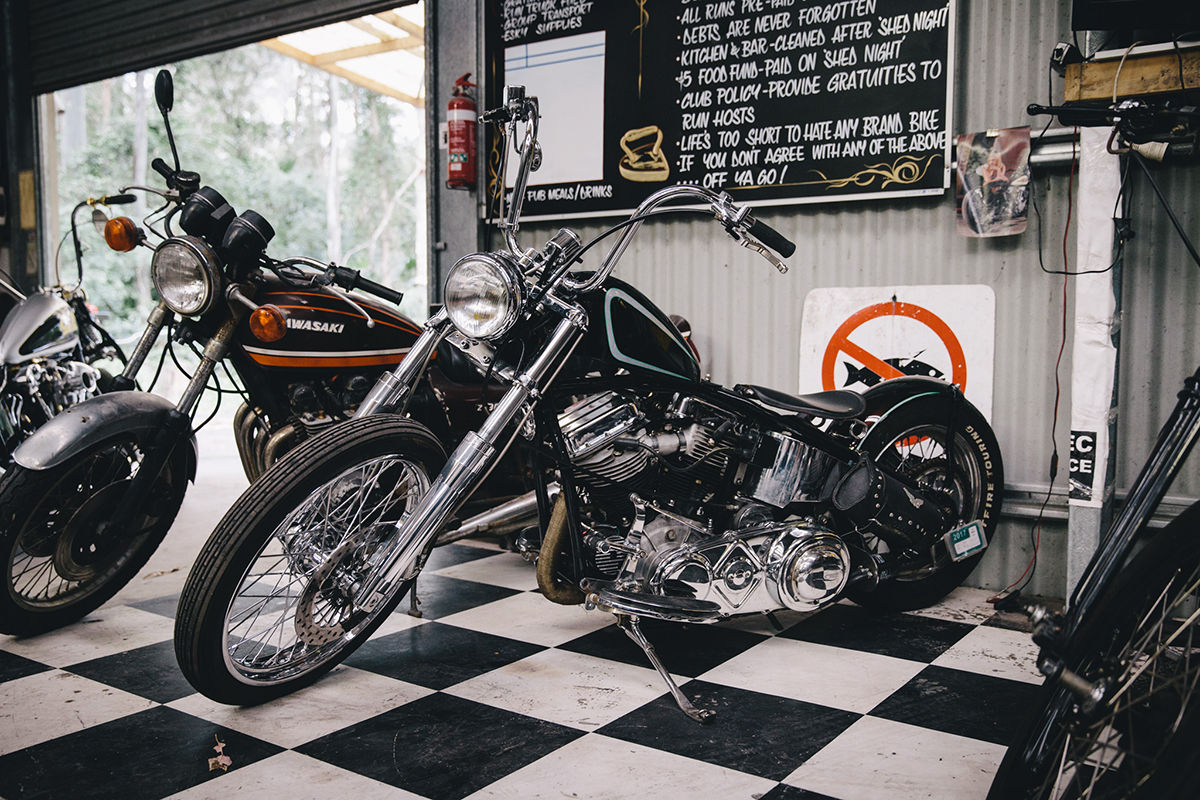 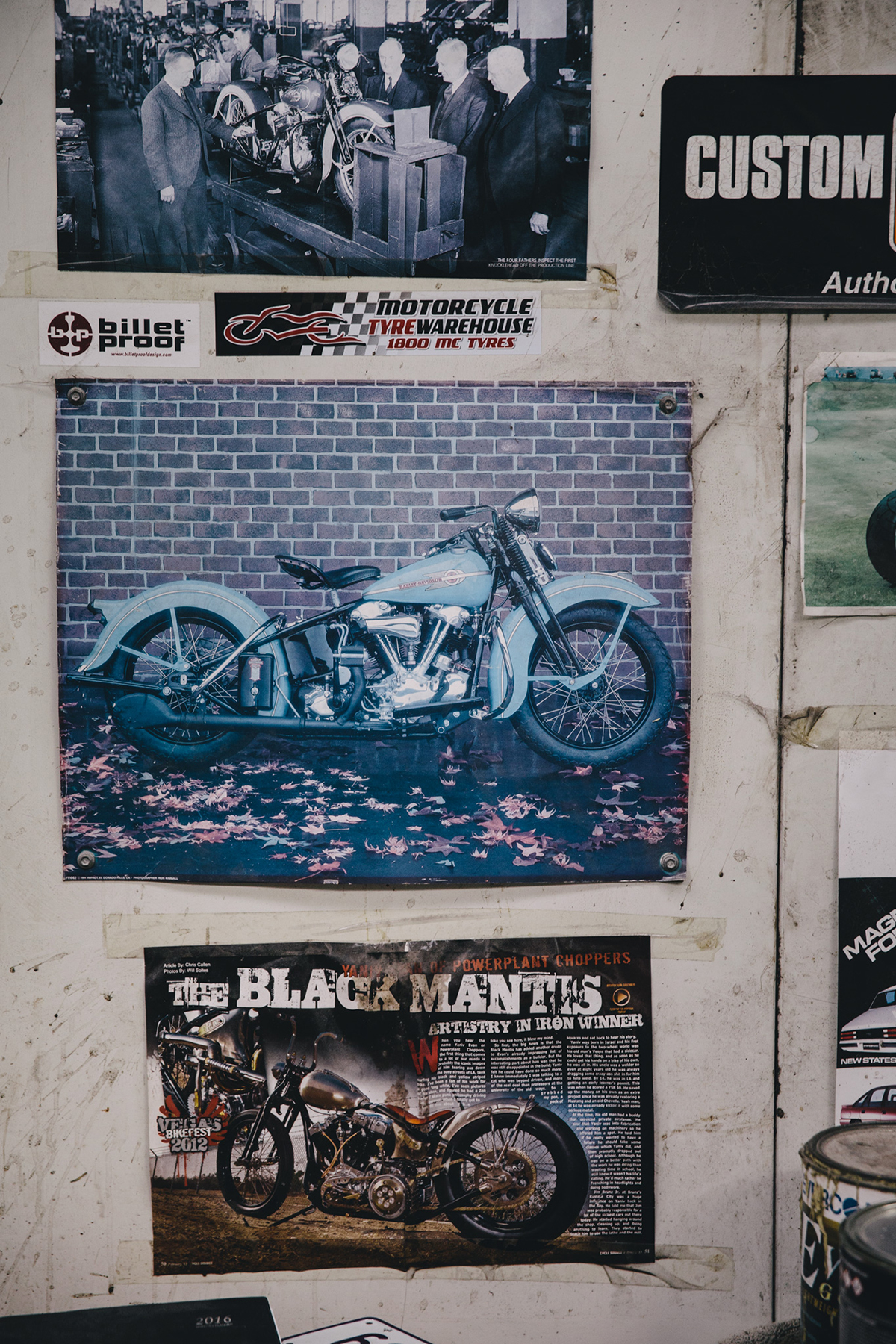 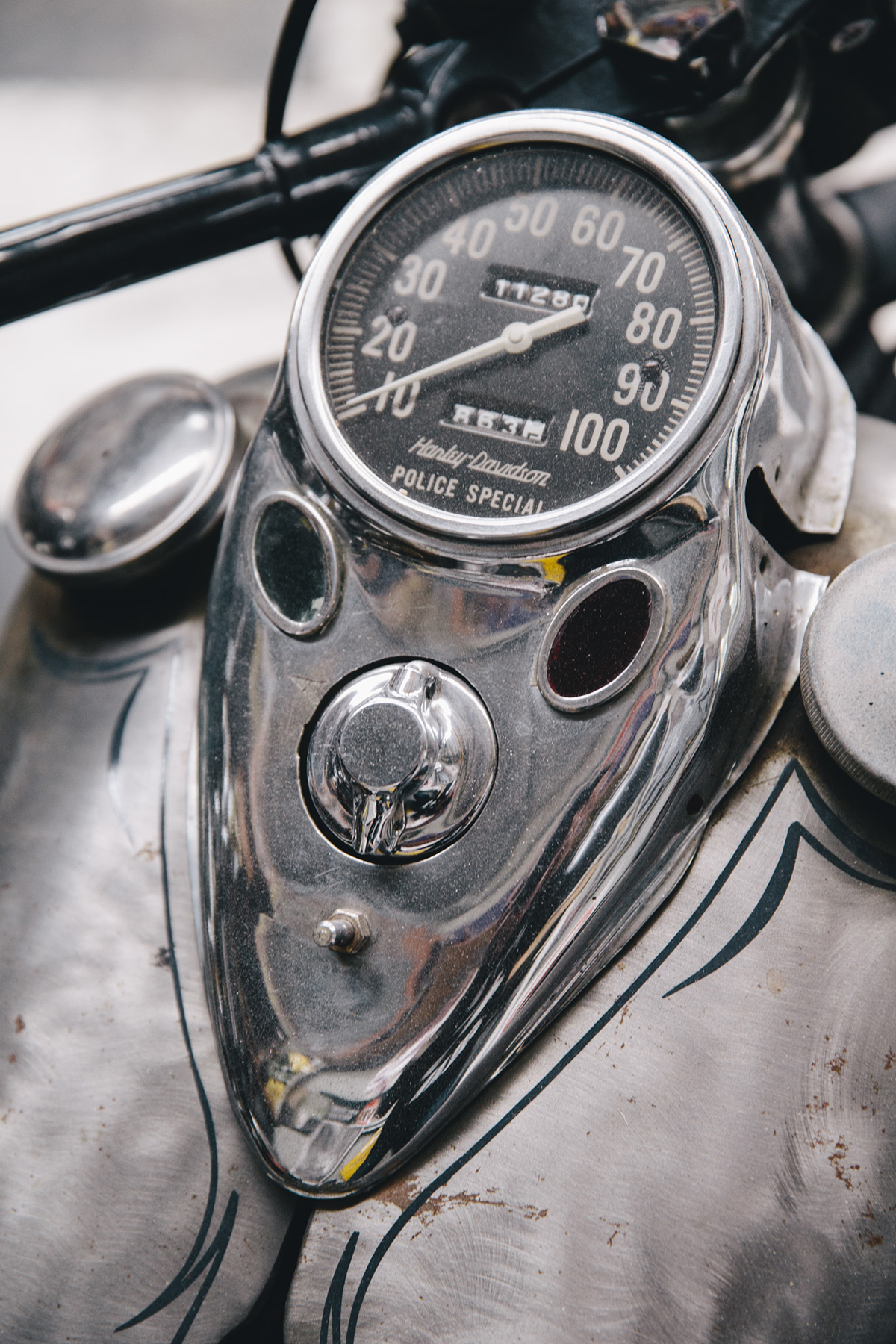 Full time workspace for Rob, and part time mischief-space for Sam, it’s a place that will make any bloke jealous. Owned by Rob, he’s a very charitable dude who kindly shares this bastion with whichever wayward souls and their machines that may find their way here ”It’s sort of a support group for motorcycle nuts who have a taste for the old and different.” Says Sam, spokesperson and designated port drinker for the shed. “Apart from the finger painting and crayon classes, also popular is the beer drinking, golf cart and lawn mower repair, pizza and beer consumption, loud music, jelly wrestling, and sleeping.  There is also the occasional bike build, car restoration, and modification…” Jelly Wrestling aside, we’ve elected to concentrate more on the mechanical endeavours, for now… 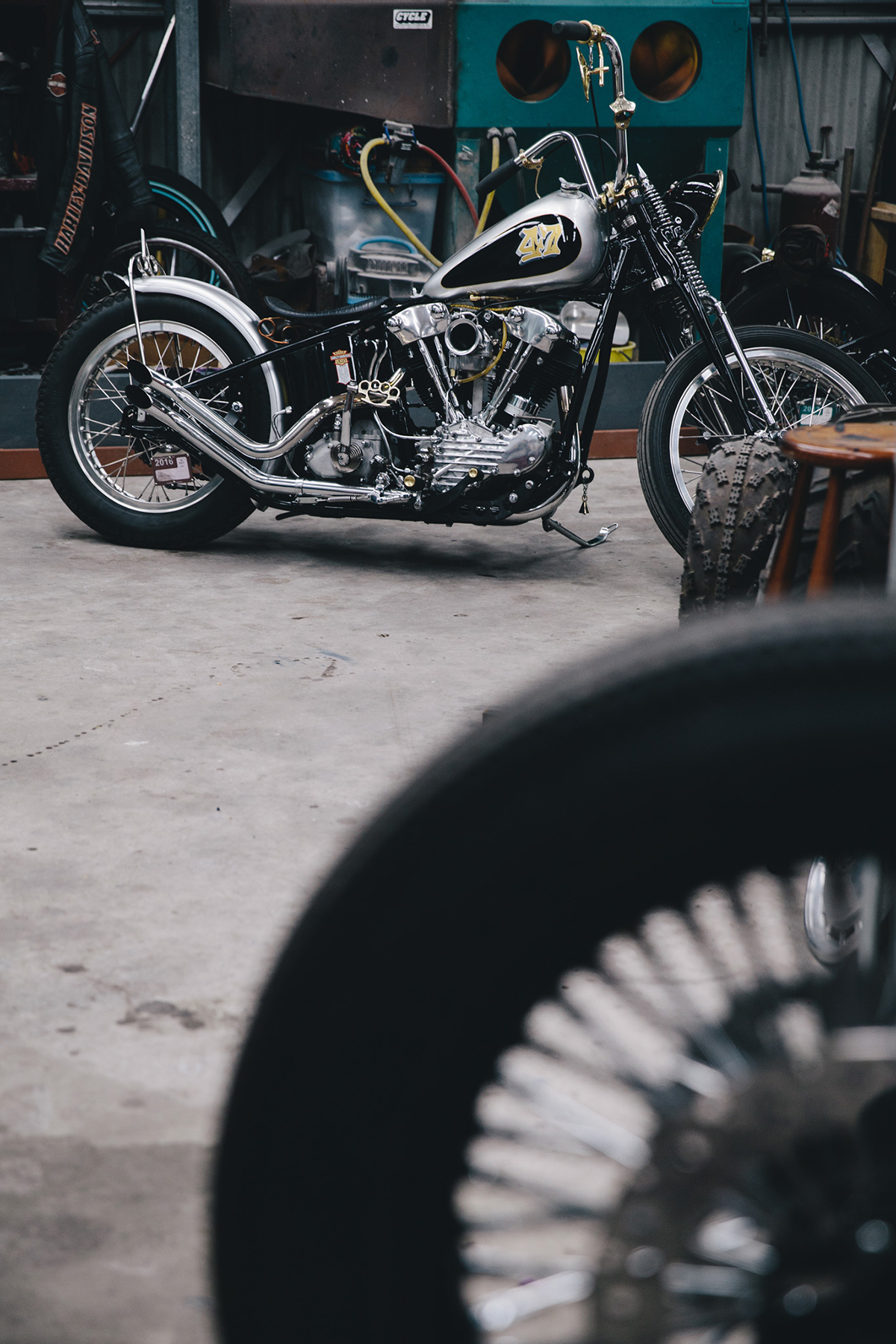 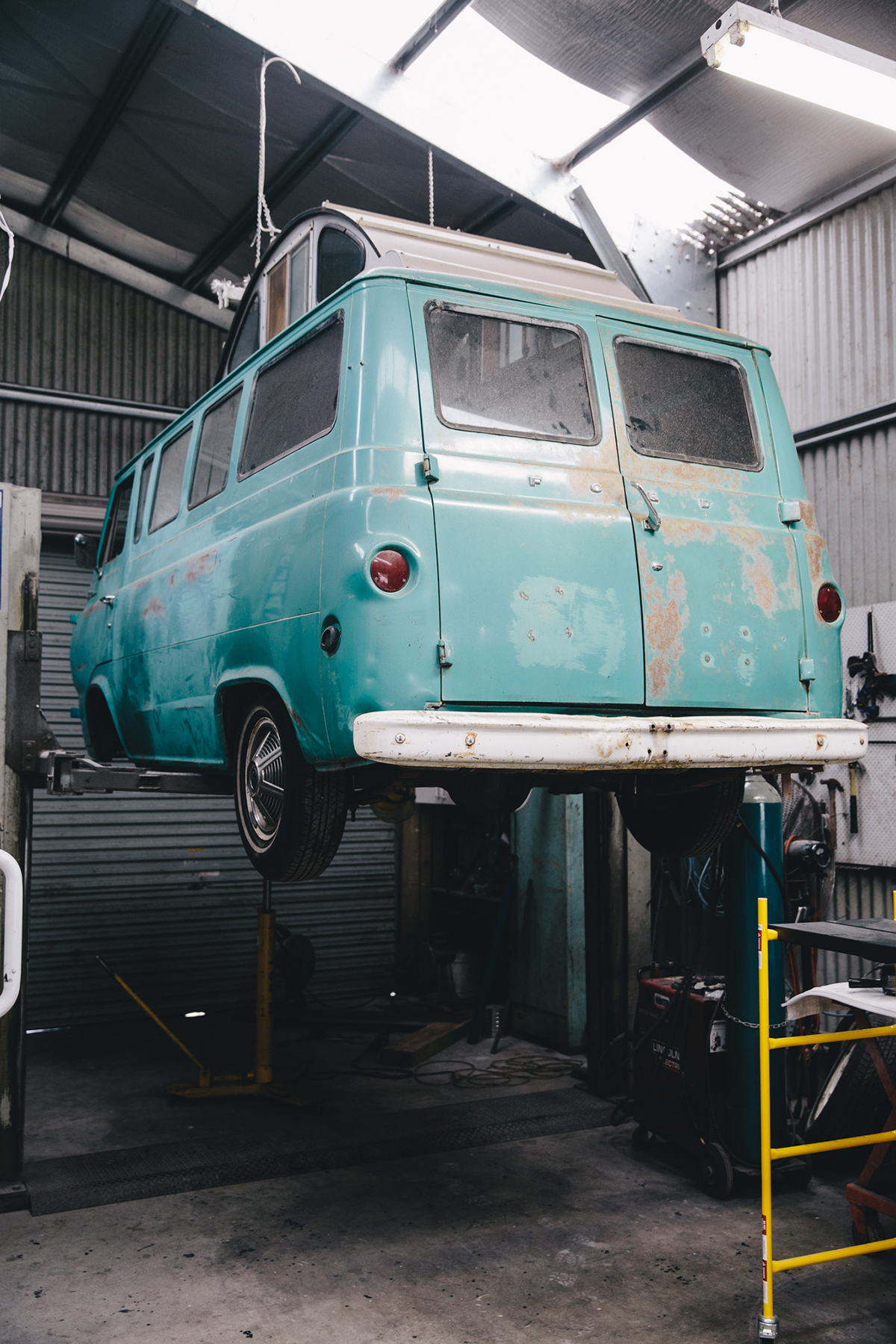 If you like Harleys (and you should) you’ll immediately start sweating as you perv and gander at the immaculate Panhead and Knucklehead builds that sit seductively at the entrance of this machine Mecca. You’ll definitely recognise Sam’s Panhead at the very least. There’s a veritable campaign of projects and builds going on. “At the moment, Rob has a ’62 Ford Econoline up on the hoist.  He bought it from a cool dude down Bondi way who bought it back from the States.  Rob’s in the process of installing a complete new front end, with a modern air bag rack and pinion set up he bought from the states.  This is to prepare for the new donk. He pulled out the original 6cyl 200cu Mustang engine to make way for a 5.7 Gen3 V8 with auto trans.  He’s hoping to get it finished in time to get to next years Boogaloo, or shouldn’t we mention that?…” 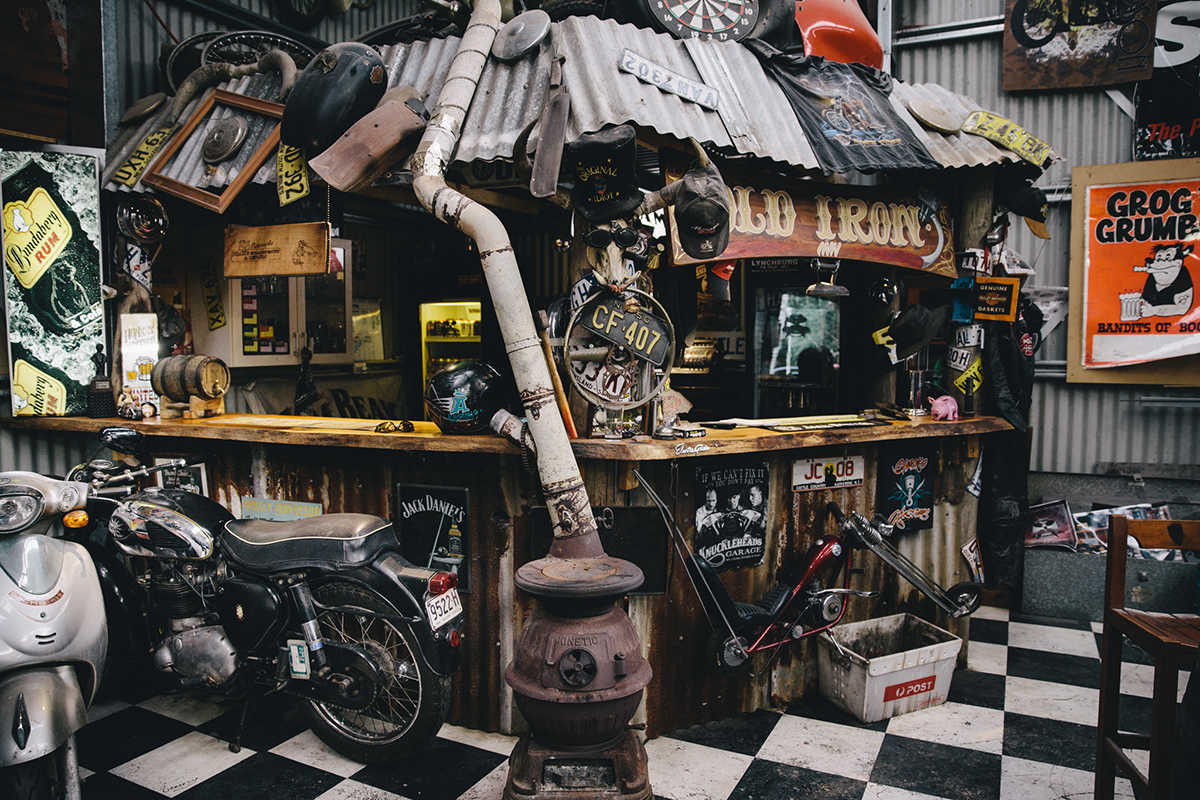 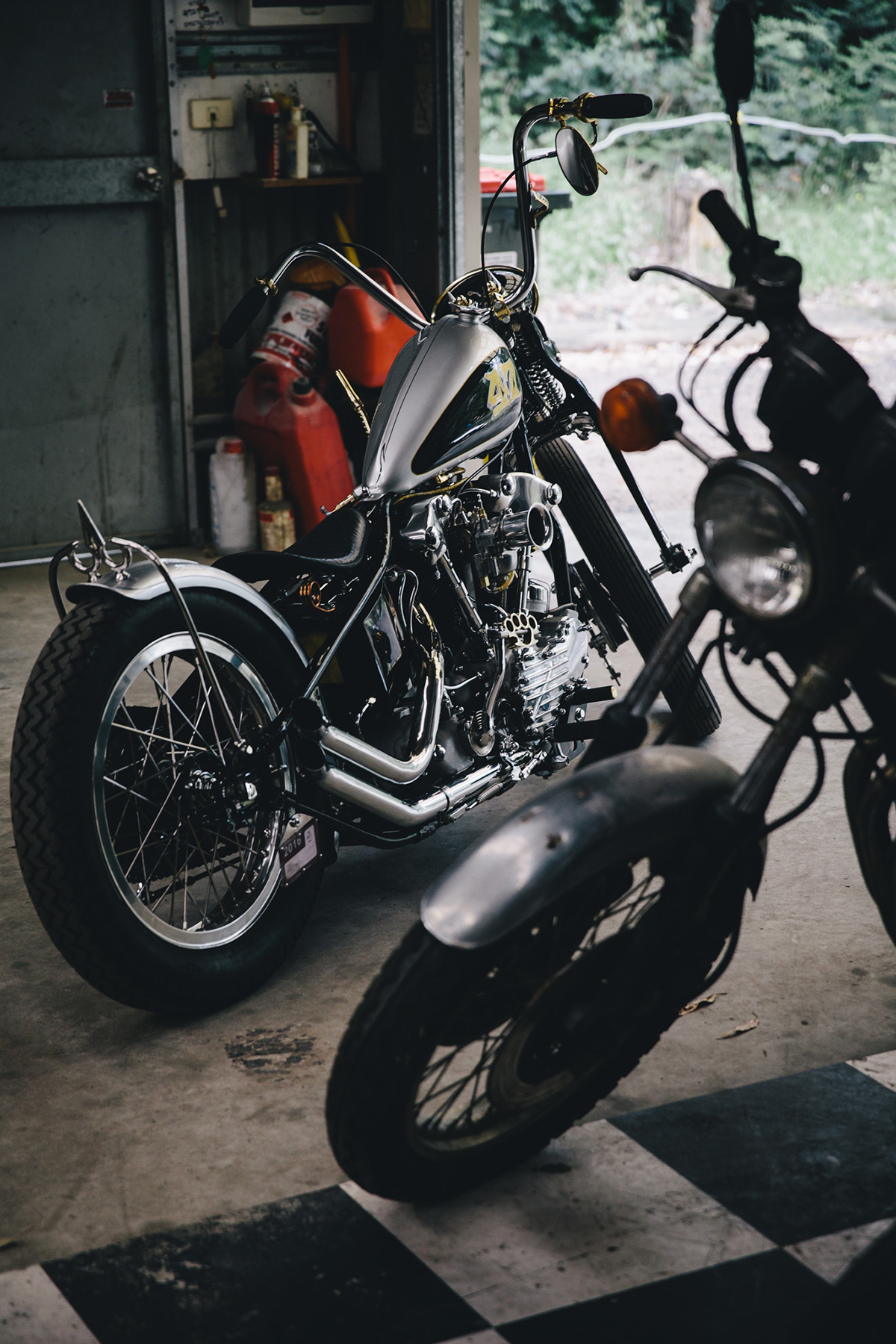 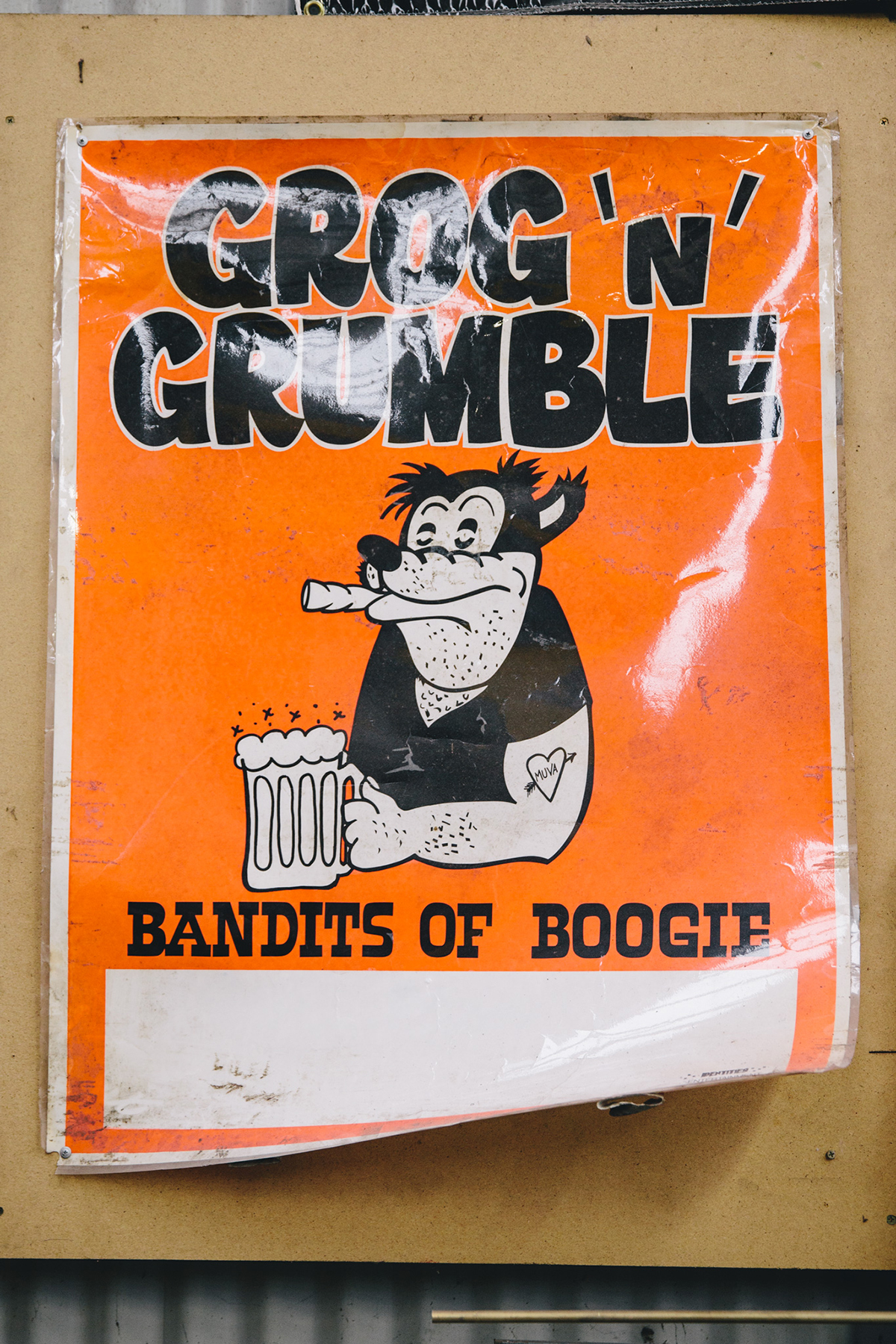 You’ll find not only is there customisation and modification going on here, but also a healthy dose of restoration, courtesy of the local vintage bike clubs that funnel in a hearty supply of work to be done. “This is along the lines of blasting and painting frames, tins going into BSA, Norton, triumph builds put together by the local old dude community (that’s even older than us!)  Not long ago, we finished all the paintwork for a BSA A10 Road Rocket, and the dude took it away and bought it back complete and it was a stunner. We’ve just finished a Norton and we’re halfway through another BSA. Definitely looking forward to seeing these together on the road.” 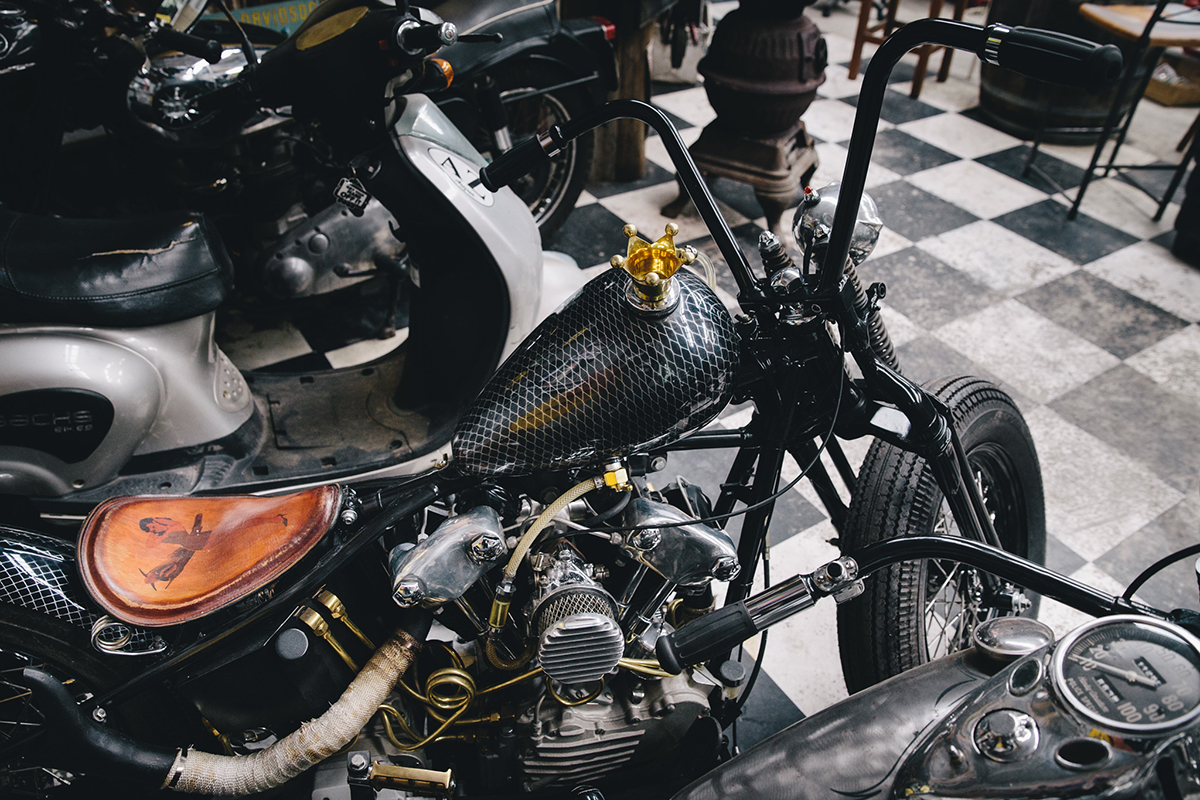 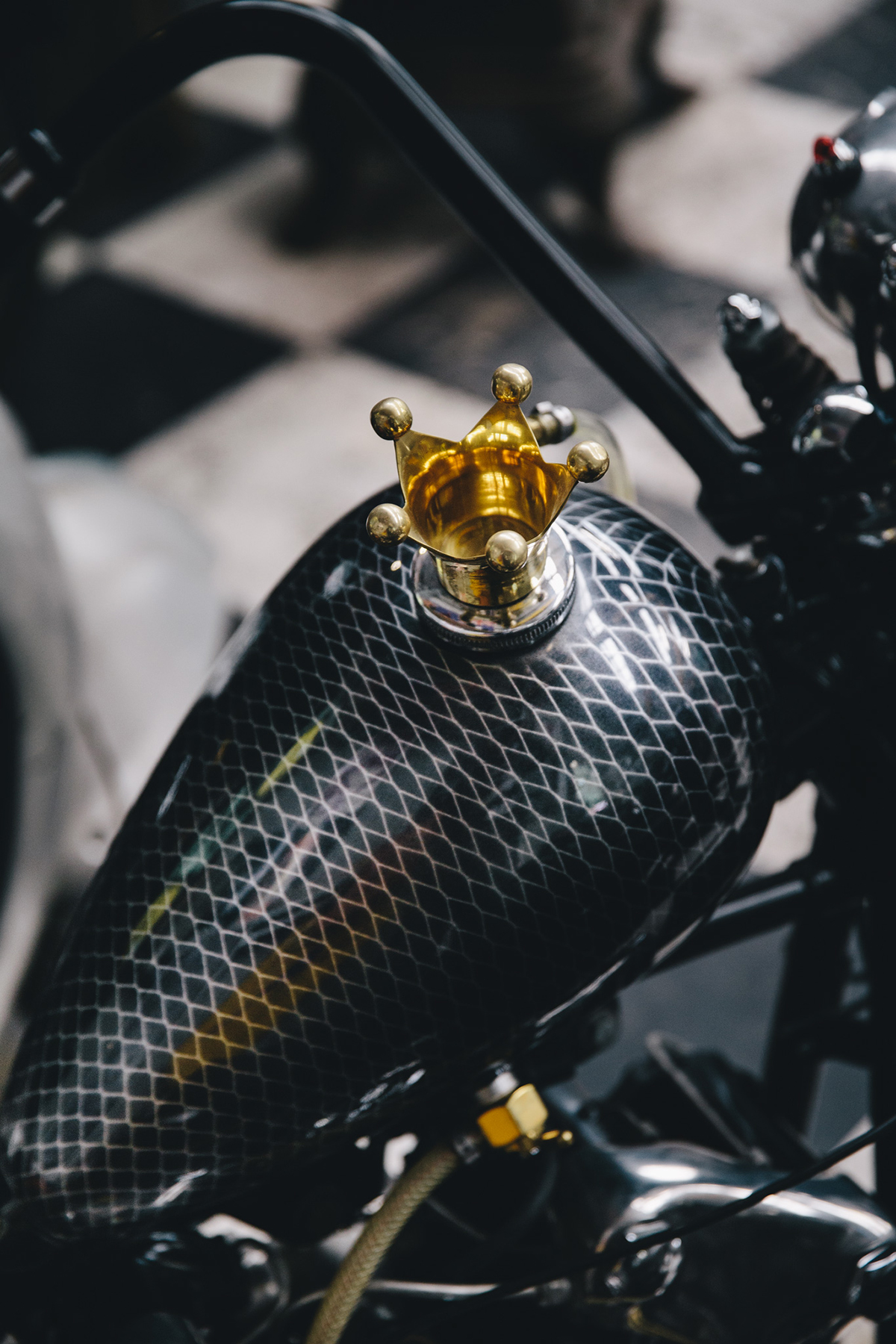 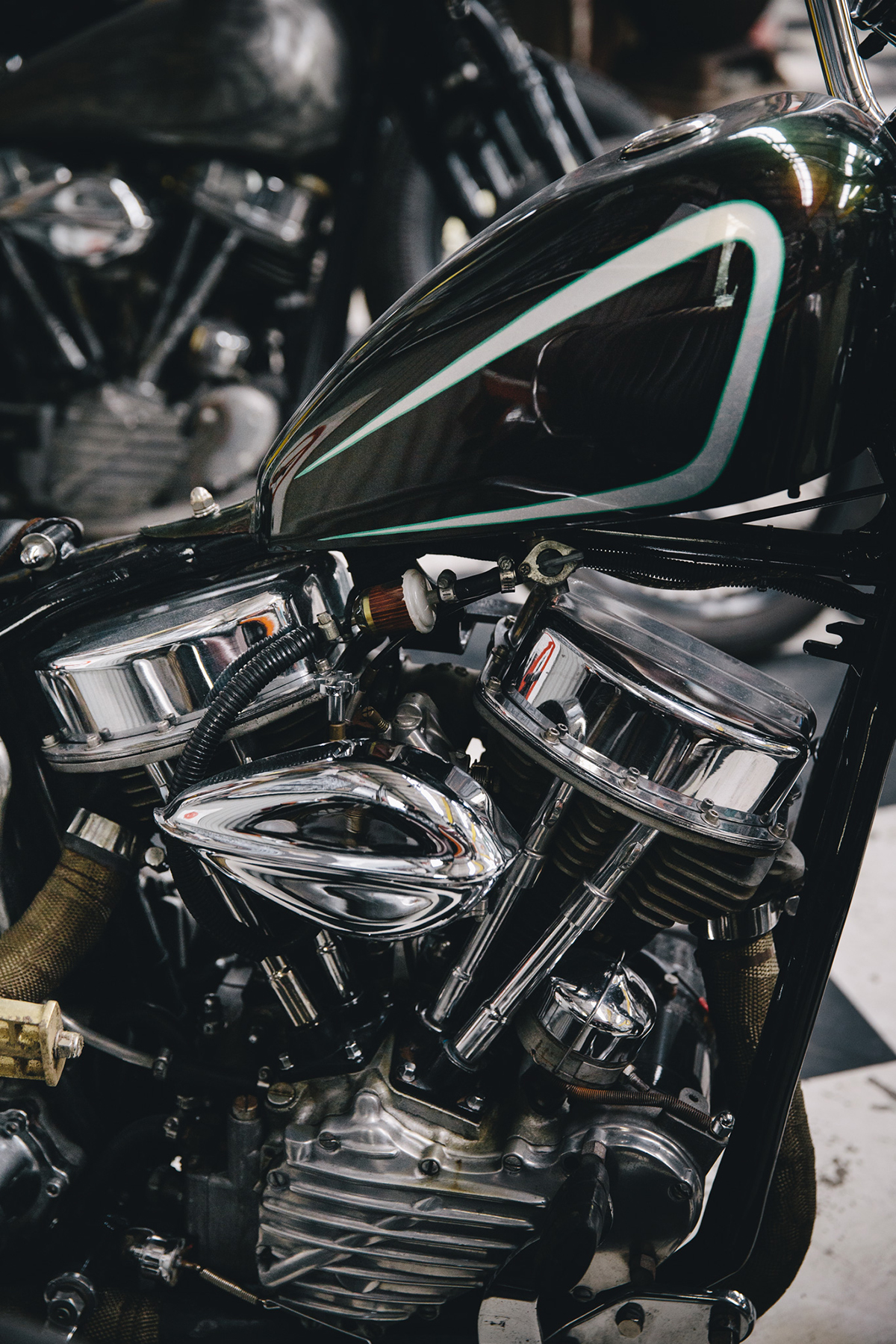 “We dig the stuff we ride, and appreciate the stuff that other people dig.  Our attitude is; “Life’s too short to hate any brand of bike”.  There’s too much of that shit in the bike scene, and we just like to avoid that in the shed.

We’ve got 4 bike lifts on the floor, but there’s always a line of bikes waiting for a look berth.  There’s a core group of about 7 or 8 ne’er-do-wells who inhabit the shed after hours.  Most have old bikes, so there’s never a shortage of repair/maintenance work for when the serious stuffs stops and the bar opens…  There’s a full spray booth in there. Got a hoist, frame-straightening machine, blasting cabinet, bar area, dance floor, outdoor kitchen, and a small stage area for the occasional visiting circus troupe.

There’s limited in-door bike parking for when someone spends more time sitting around the oak port barrel than is legally recommended.” 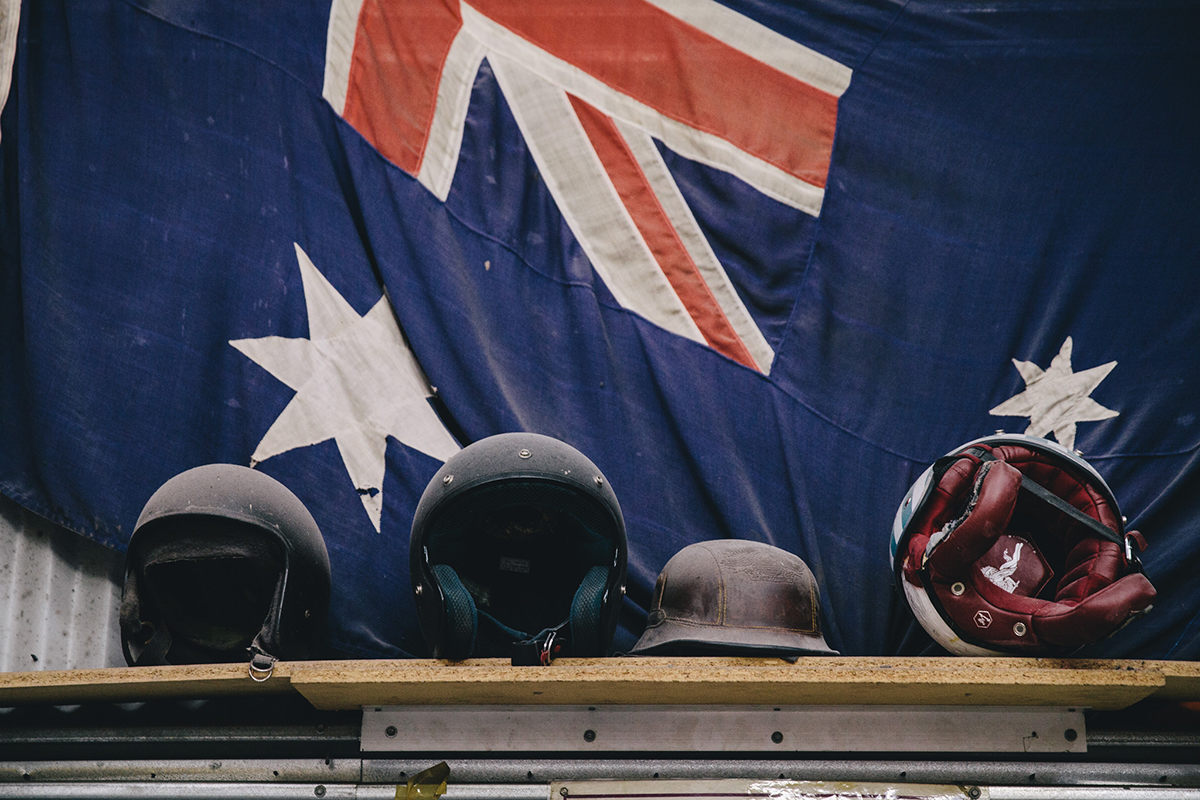 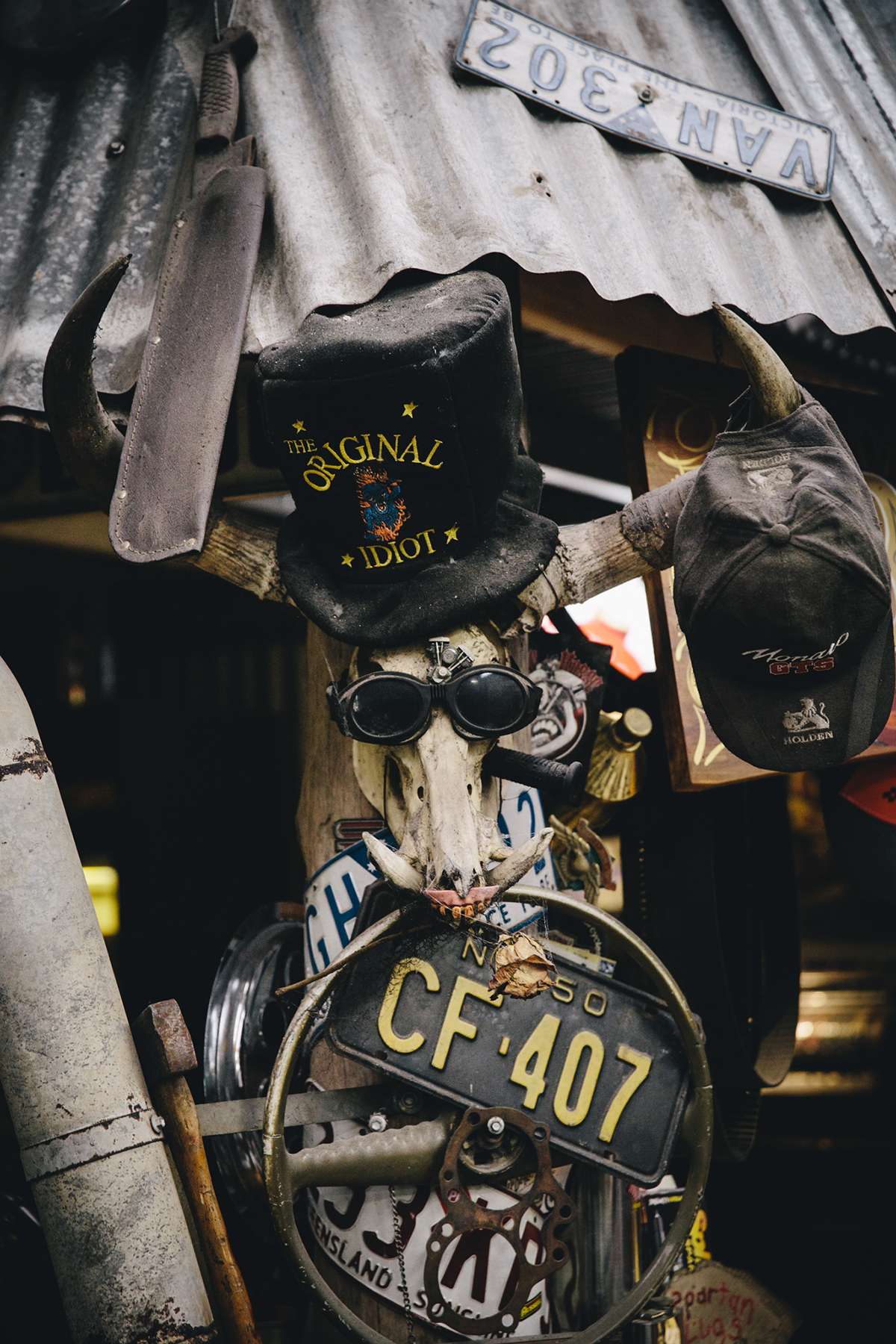 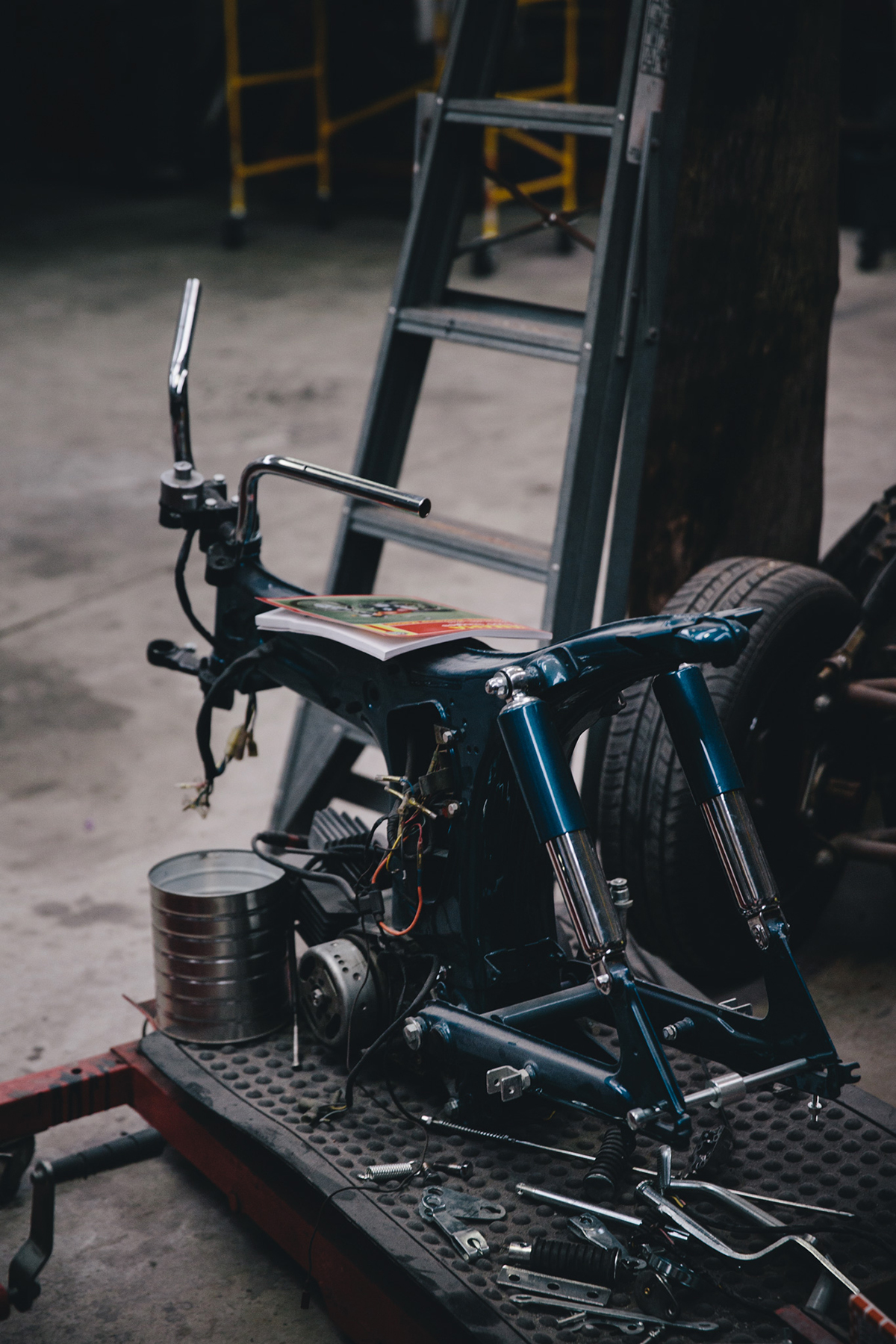 “Rob’s got a Genny Shovel bobber build that gets worked on when there’s a chance. It’s pretty cool, although a lot of Harley nuts had a bit to say when we posted photos of the original frame being sawn in half and a replica rigid rear end being attached. There’s a shitload of fab work done with the oil tank and guard being made part of the frame.  Rob doesn’t give a shit what people think, he goes with what he feels like at the time, and that’s what your attitude has to be to get on in this place.  And it works…” 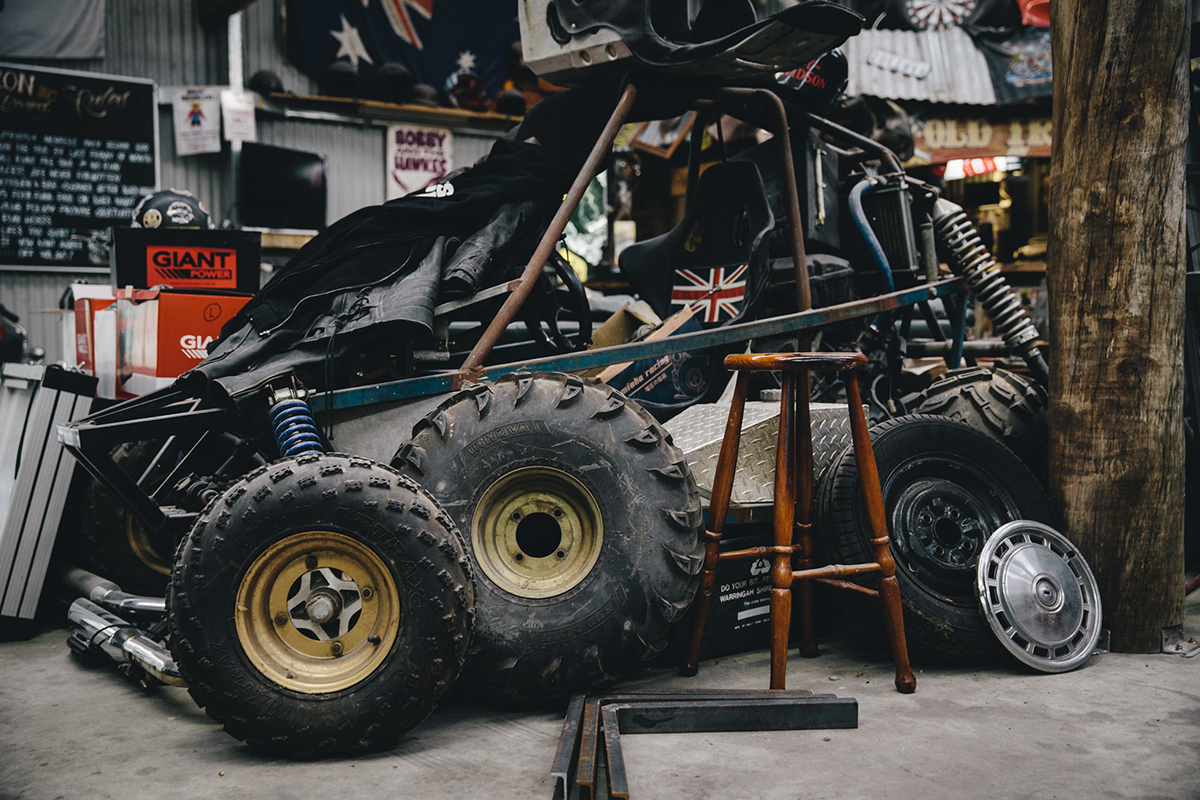 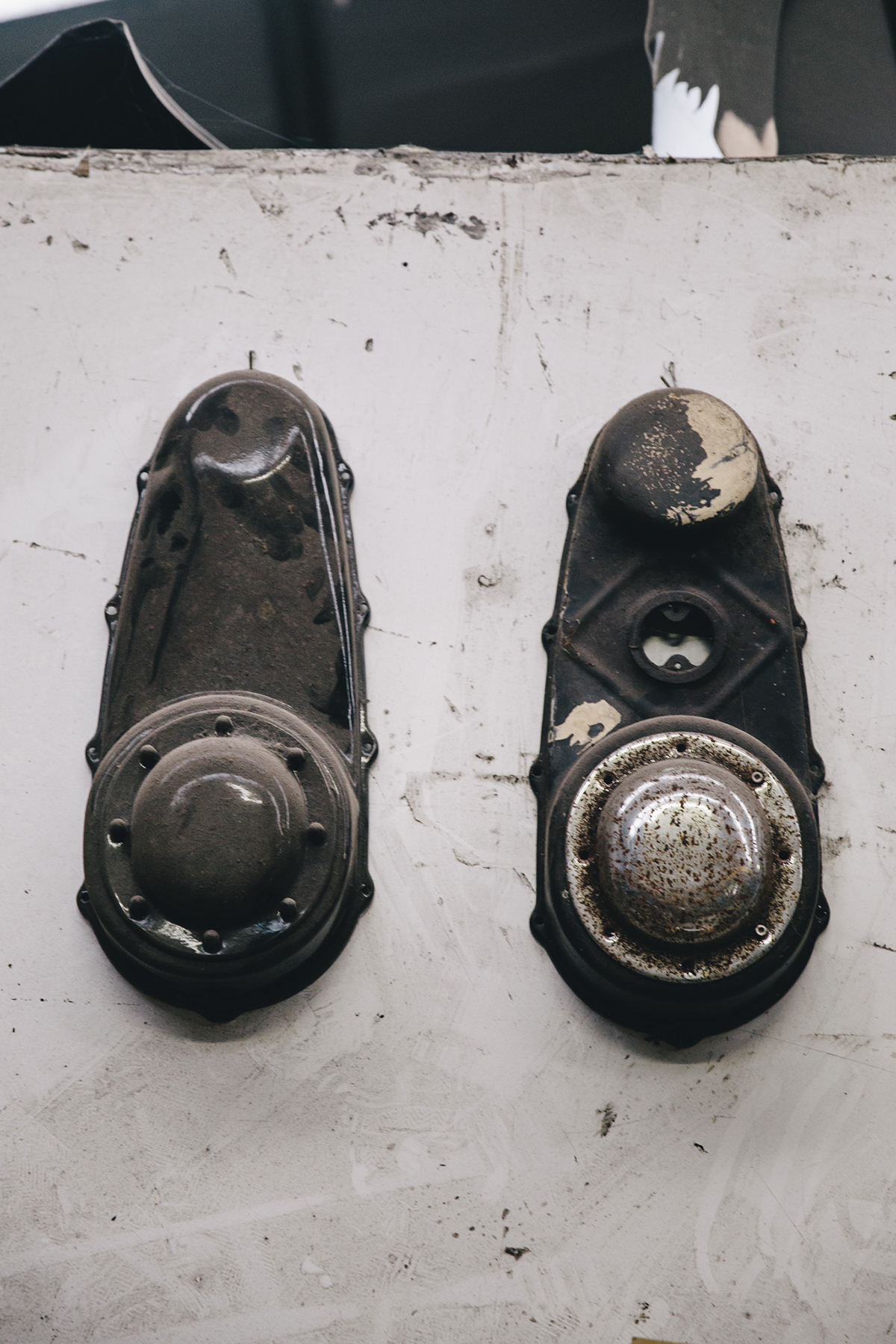 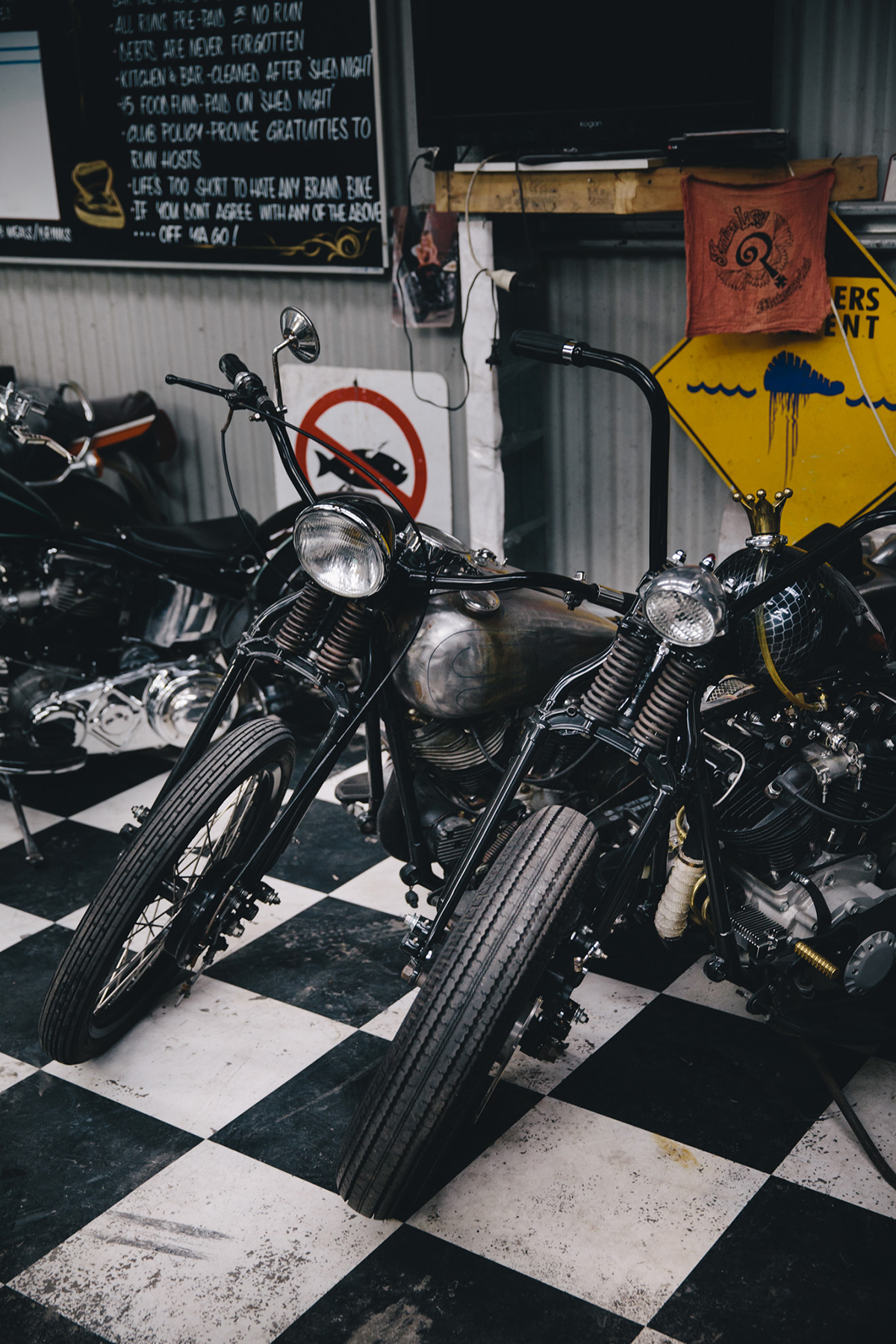 “We spend at least 3 days a week at the shed, sometimes more. More often than not we’re accompanied by the 3rd amigo, Spike. The rules are that Rob returns to his family by 6pm during weekdays – more a guideline than a rule… Spike and myself do our best to send him home, but he can be a stubborn bugger.  It’s the Maltese in him.  It’s only a 2-minute walk from his house to the shed at the back of his property; although it can take up to 2 and a half hours from the shed back to the house…  Go figure?

Rob, Spike and myself get out on our skoots every day that we can, even if it’s just a quick jaunt down to our favourite local Thai place for a not-so-quick lunch.” 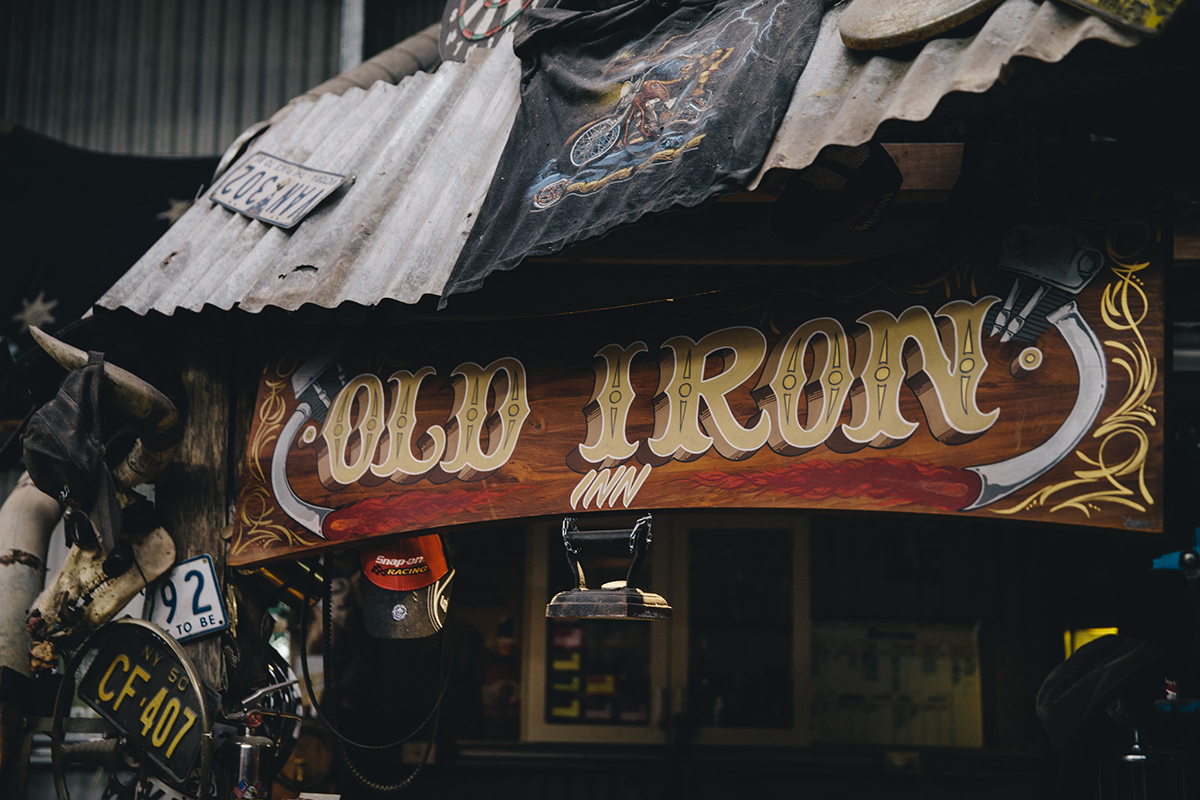 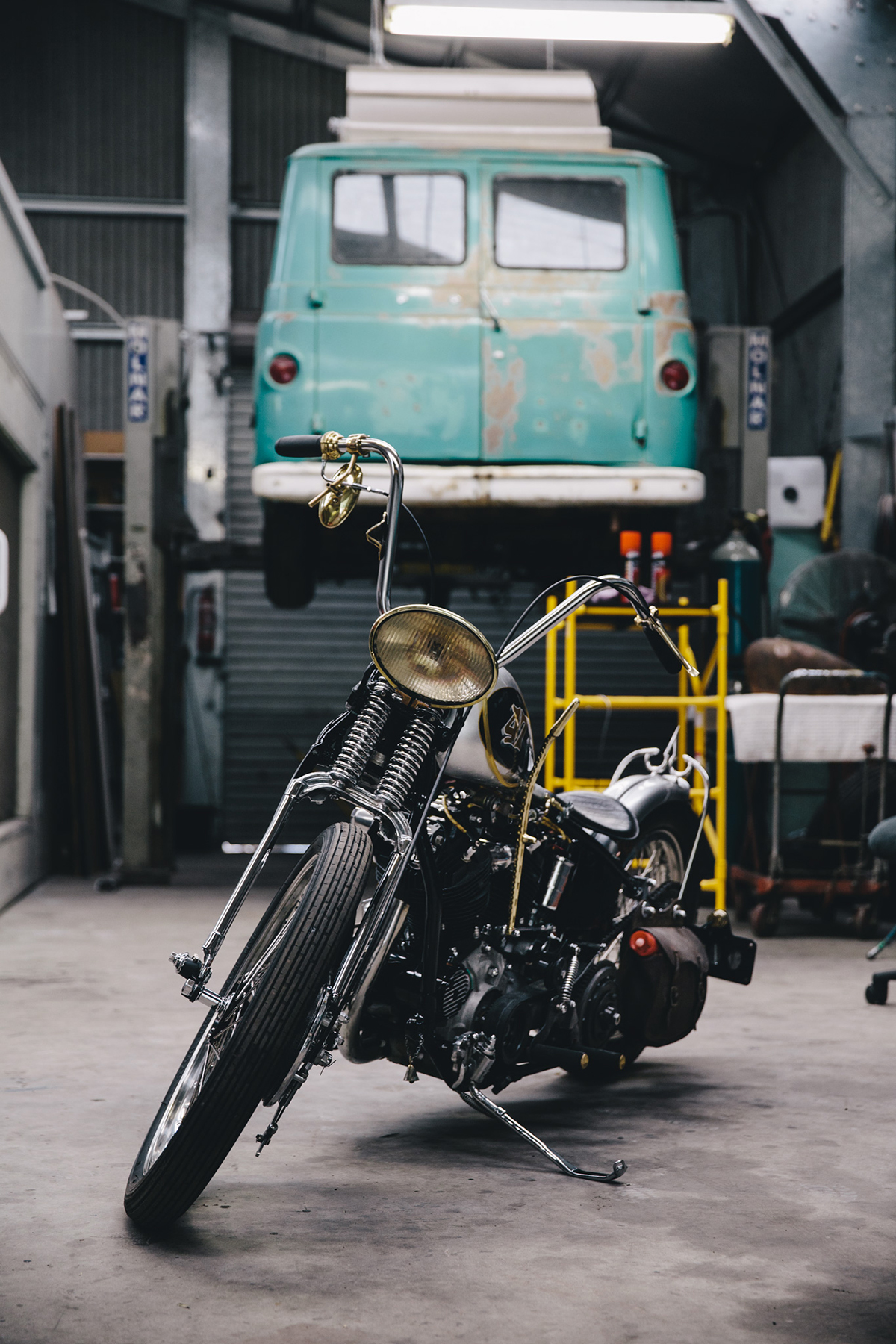 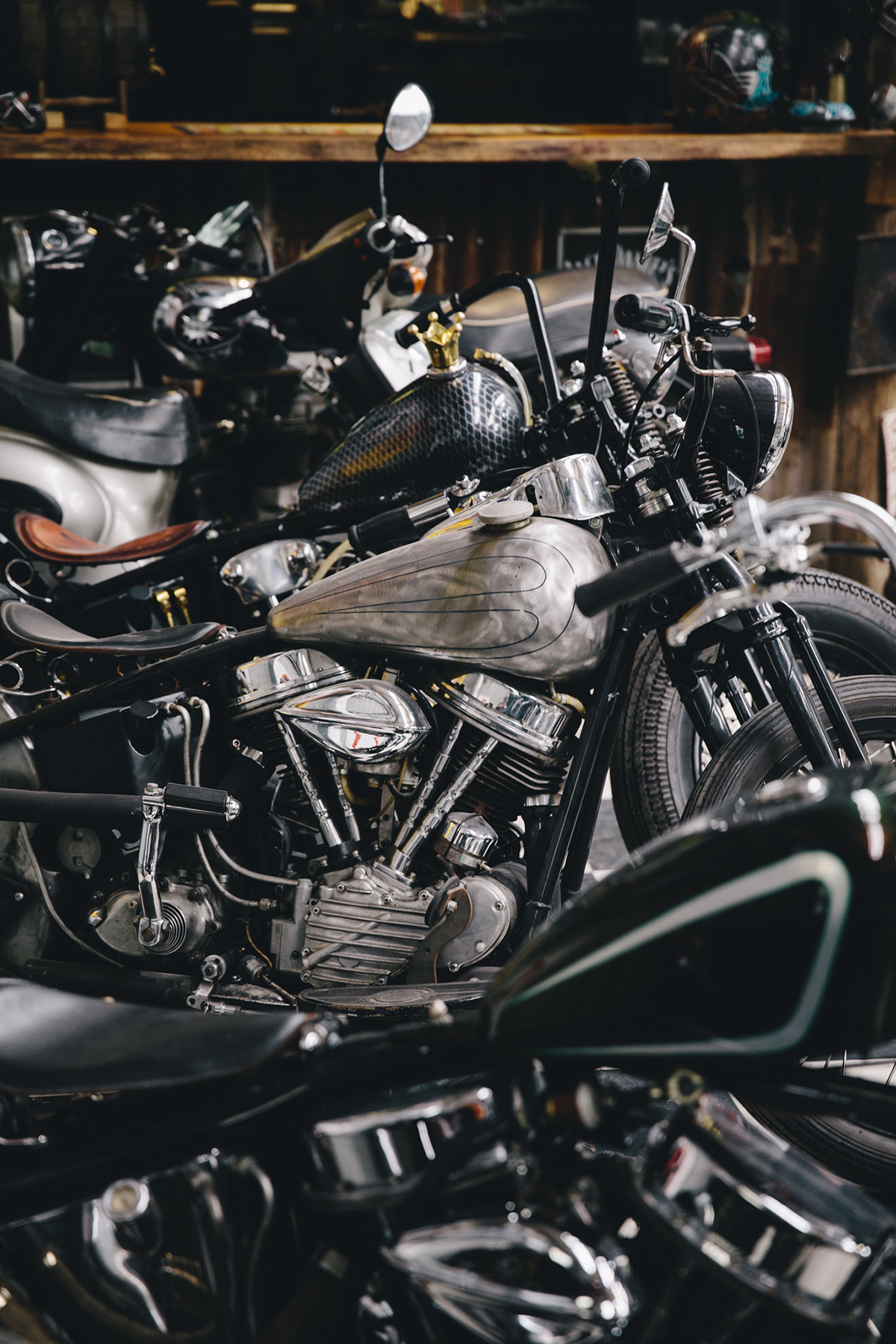 “Friday arvo sees a regular stream of friends and bike lovers passing through for a quick beer on the way home.  Every second Friday that develops into something bigger, usually accompanied by a meal prepared by our in-house Chef-de-brilliance Binnsie, plenty of bevs, loud music, occasional burnout, a bit of indoor circle work on the in-house scooter, and stuff we don’t even remember… Our Chrissy Party is a celebrated annual event, and fast approaching.  This is where we host our wives and friends to a large party of food wine and song.  The band is usually harder to get rid of than an oil stain under a panhead…

And not to mention the occasional appearance of our good friend and hero to all, “Naked Man”, his disguise being an old leather flying helmet and goggles.  No one knows his true identity to this day, but we are forever grateful knowing that he’s out there if we need him…” 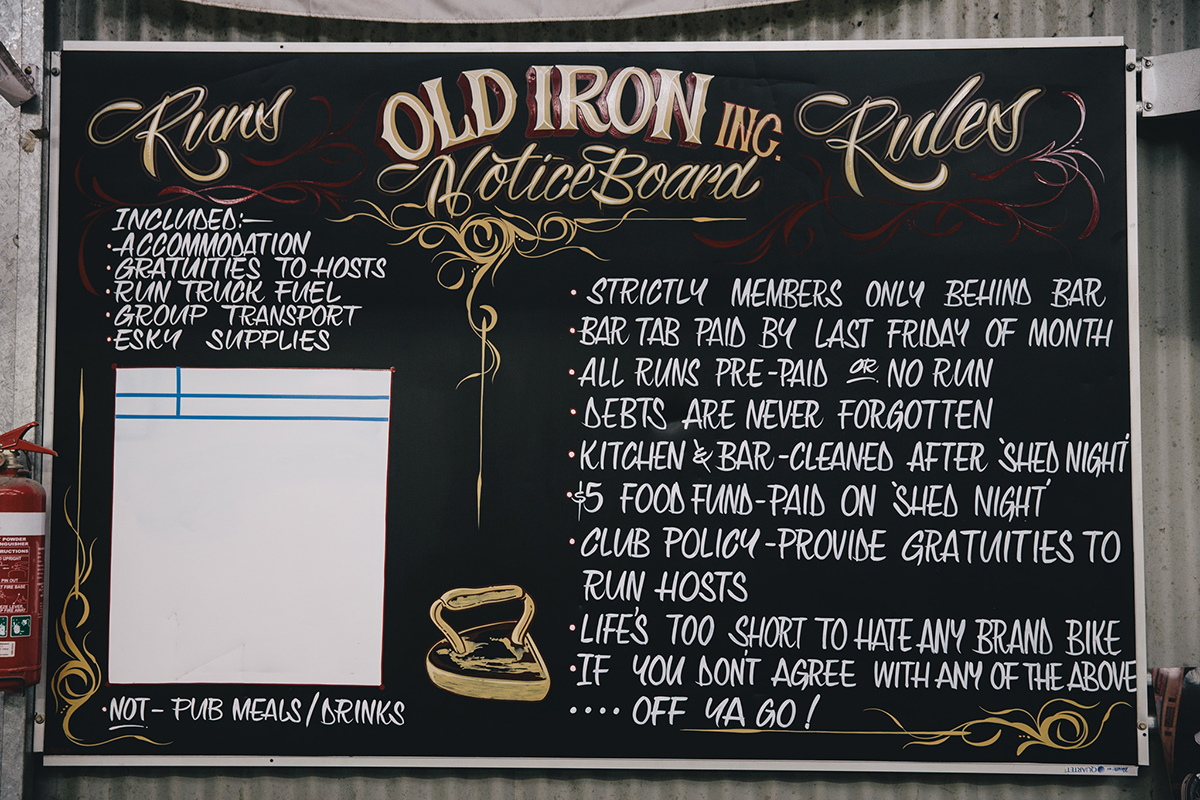 It would seem to be a pretty comprehensive space to get work done, and get working on not getting work done. But is it missing anything? “We were going to add a brass pole, but none were rated strong enough to hold any of us on a Friday night.  However, we are in the throws of finishing a mezzanine level to house a pool table, lounge and fold out bed.  Maybe a fireman’s pole for ease of dismounting the mezzanine?”

To check out more of Rob’s work, or have him get something done for yourself CLICK HERE 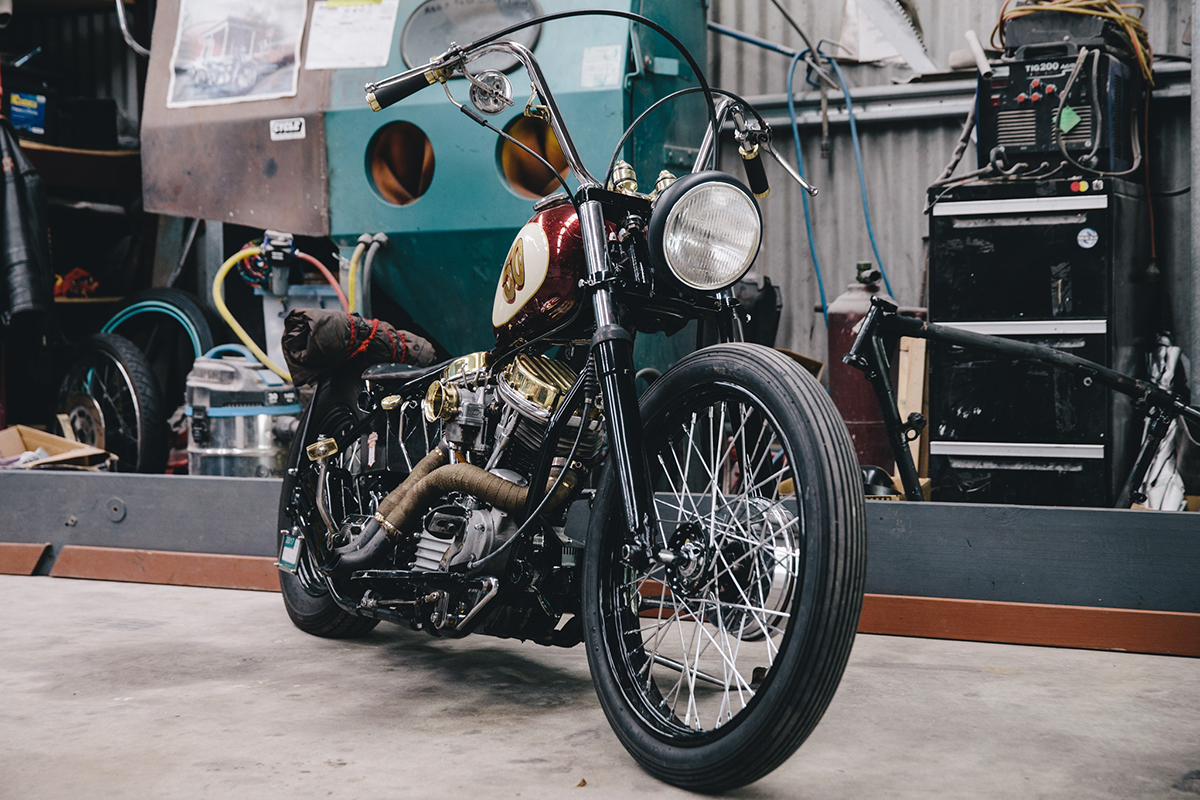 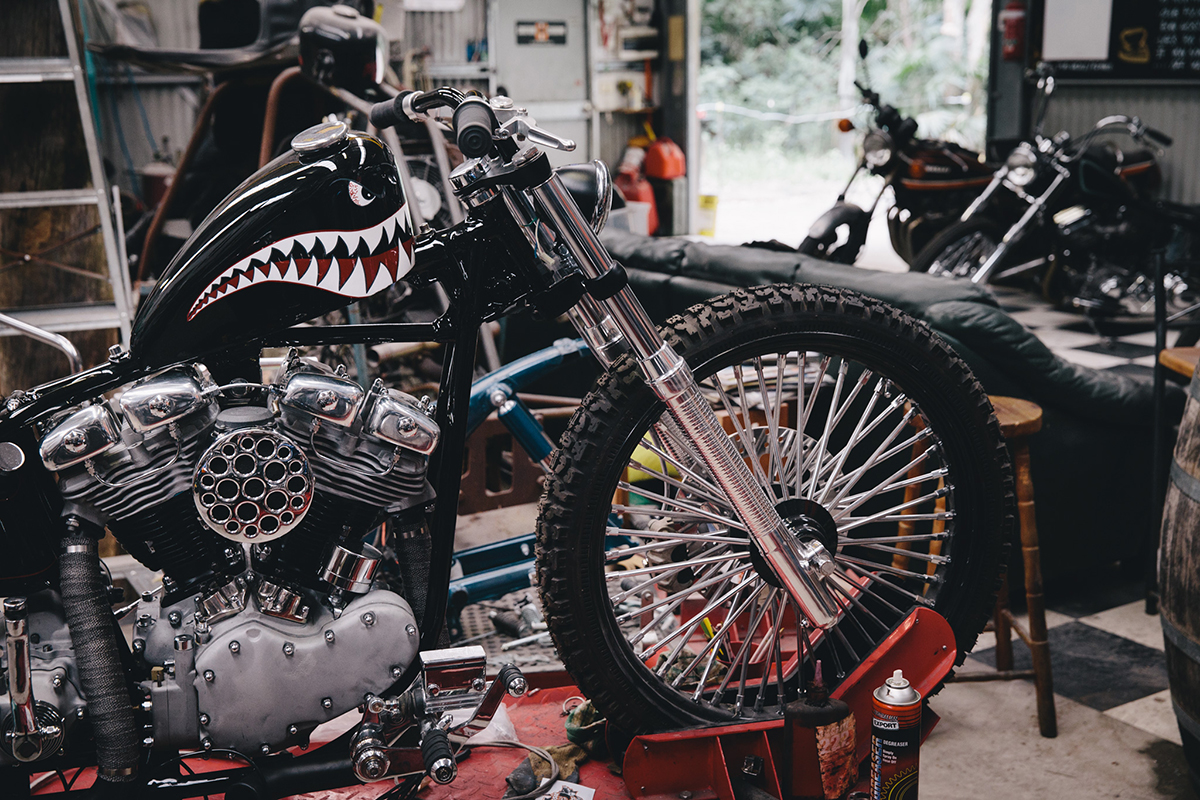 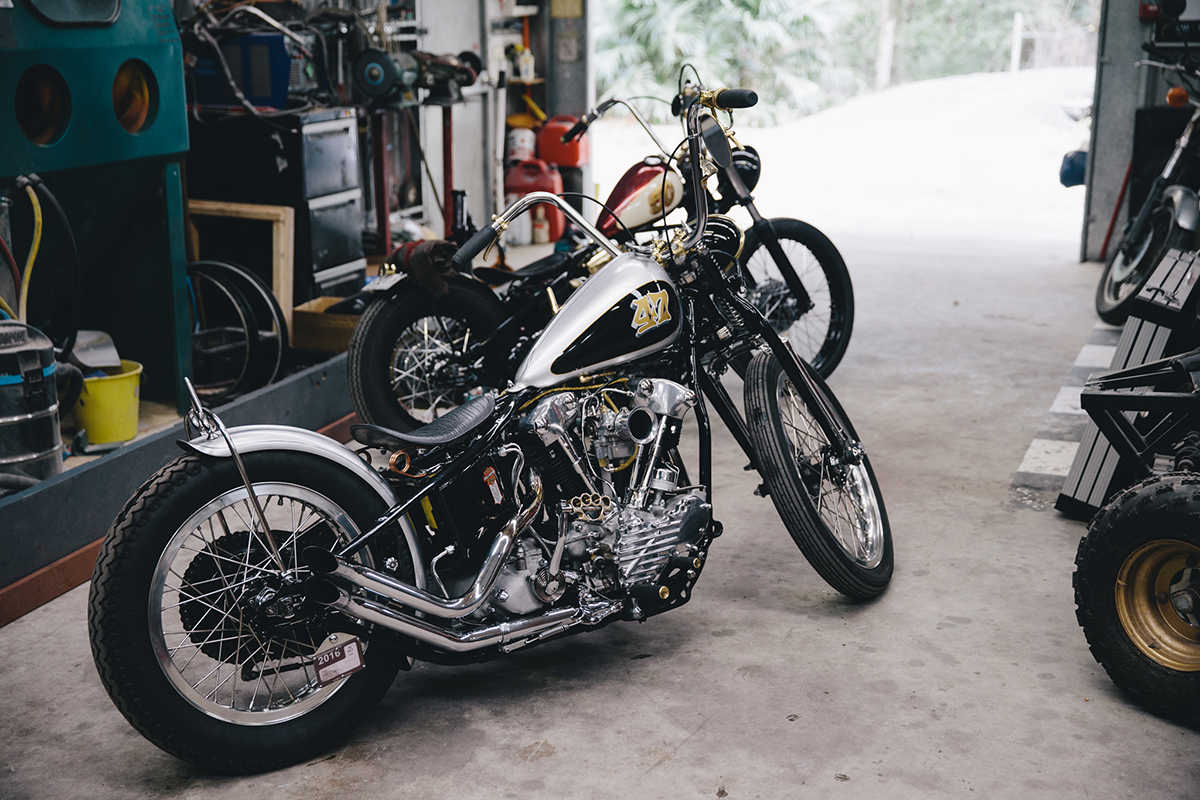 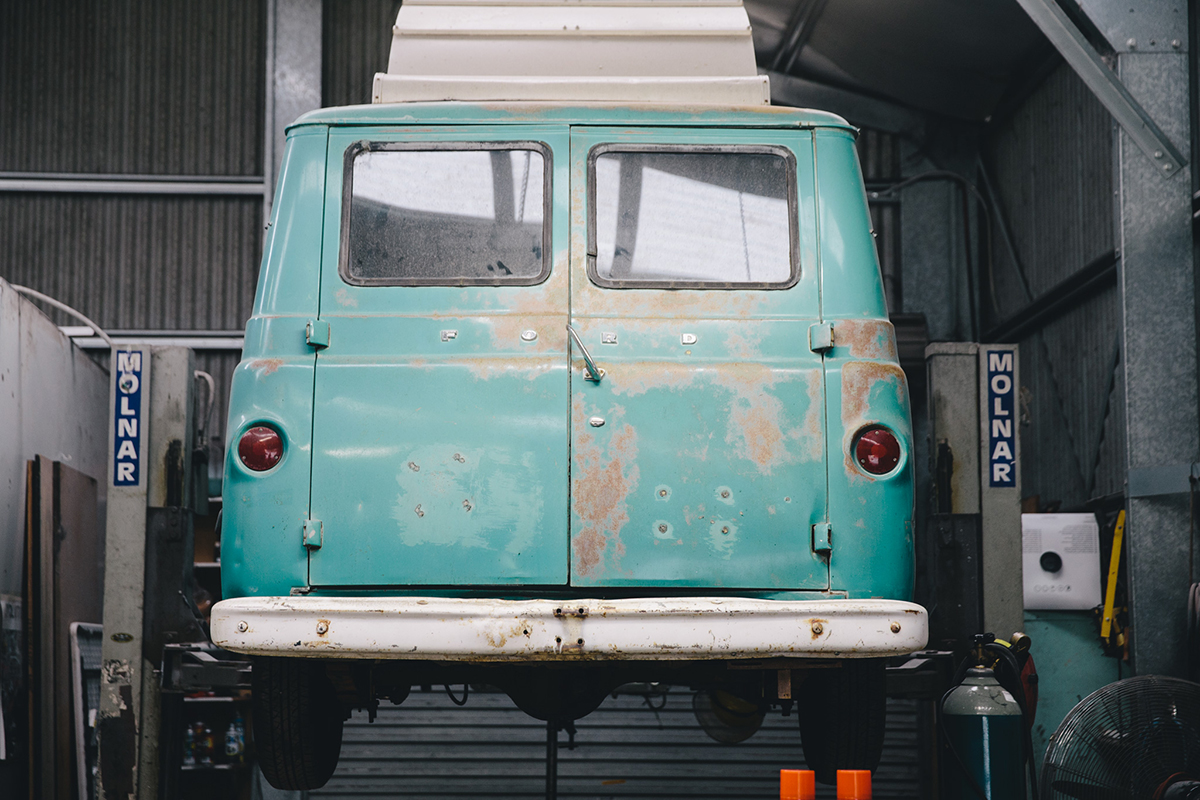 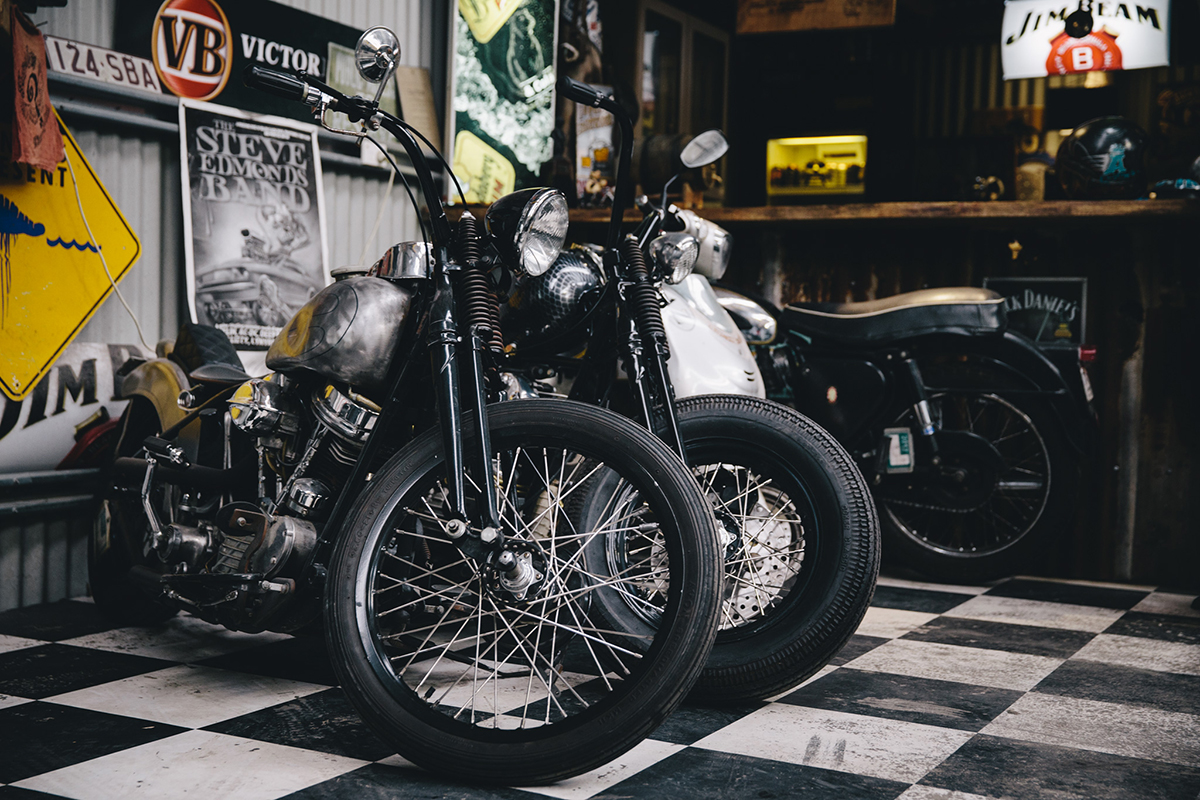 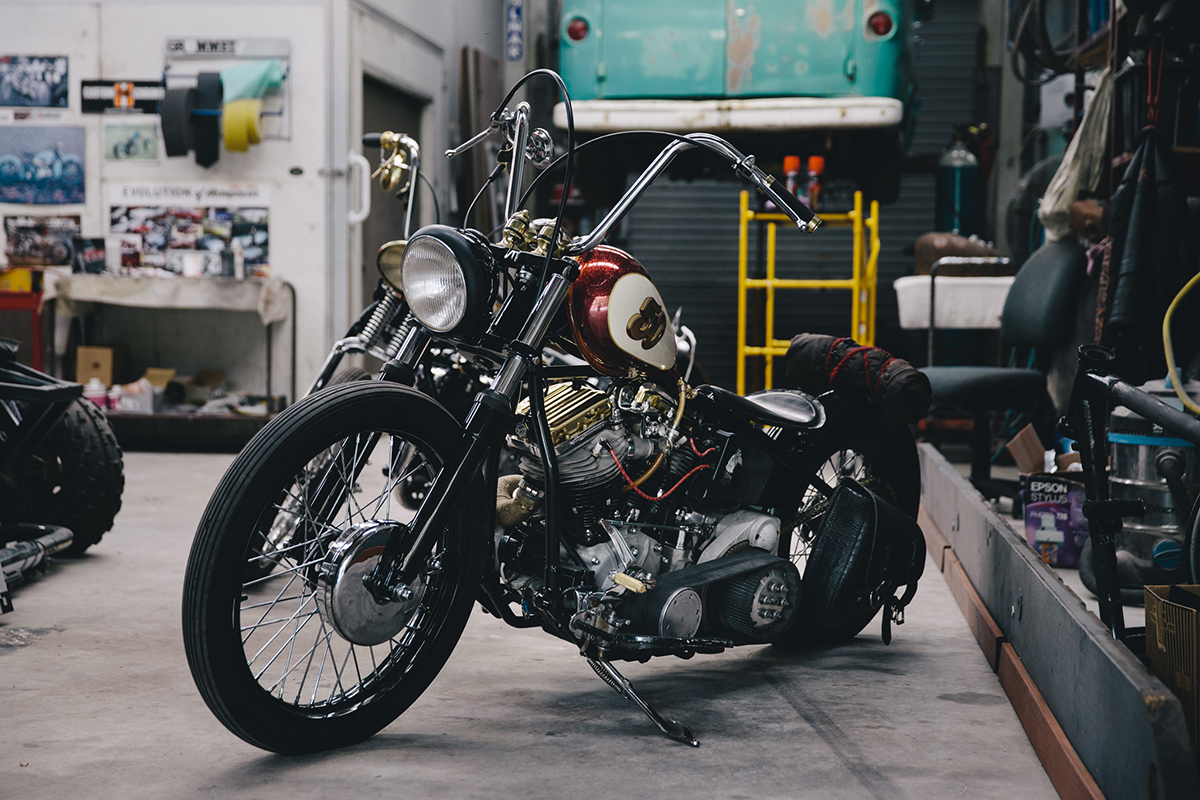 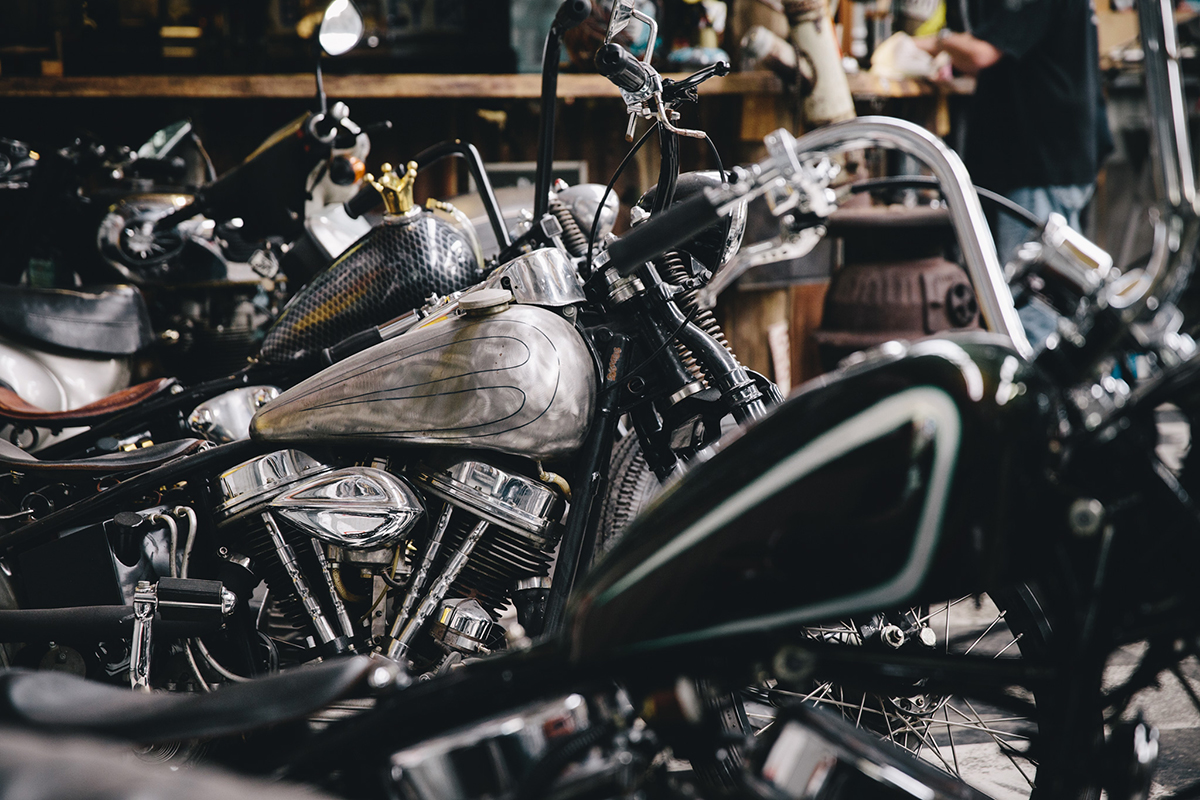