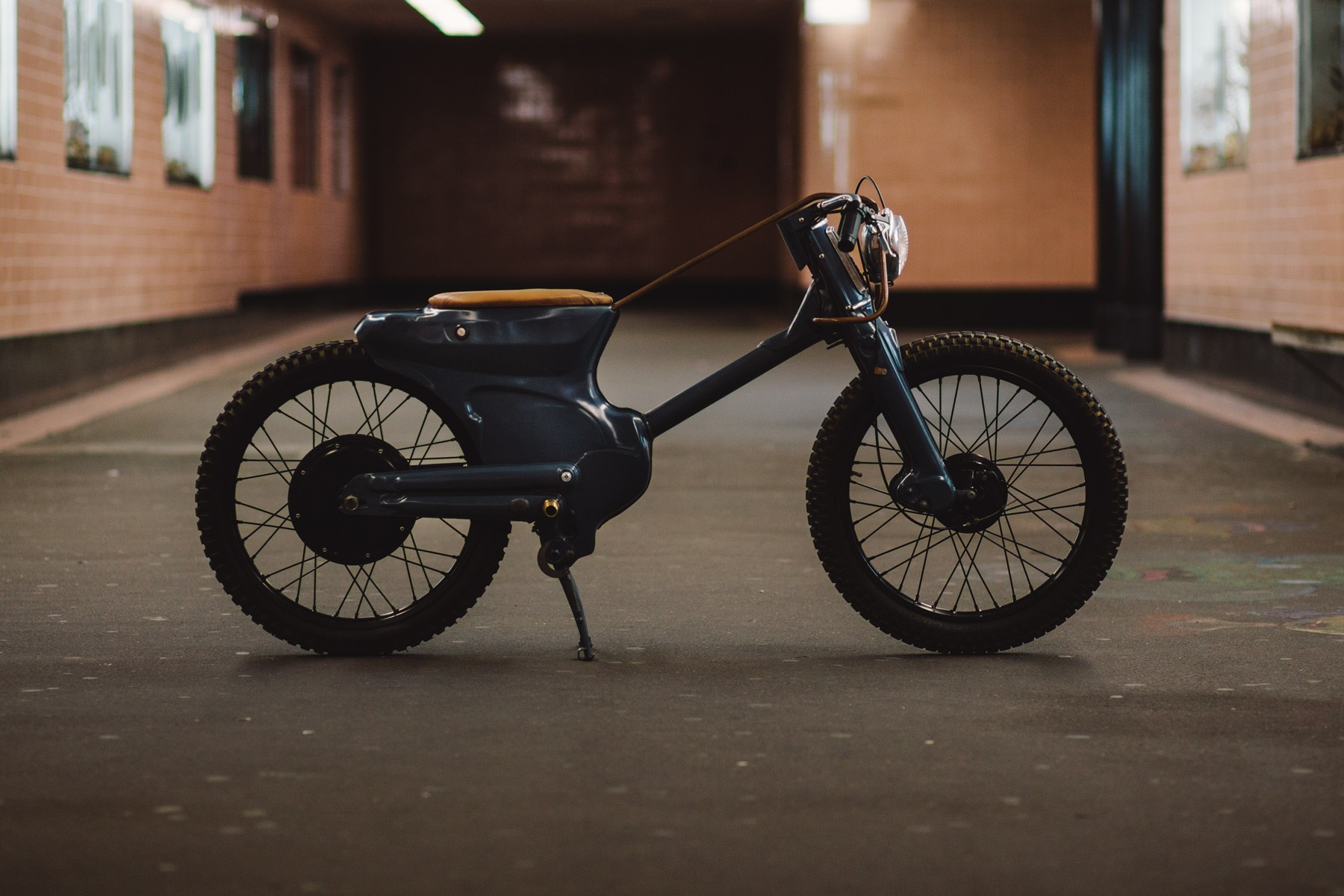 All during Throttle Roll 2015, similar questions echoed around the punters that were there to check out all the custom bikes. -“Where’s the engine?” “What is that? Where’s the pedals and chain?” This steel blue little machine had everyone scratching their head at what exactly they were looking at, but no, it wasn’t a pushbike. 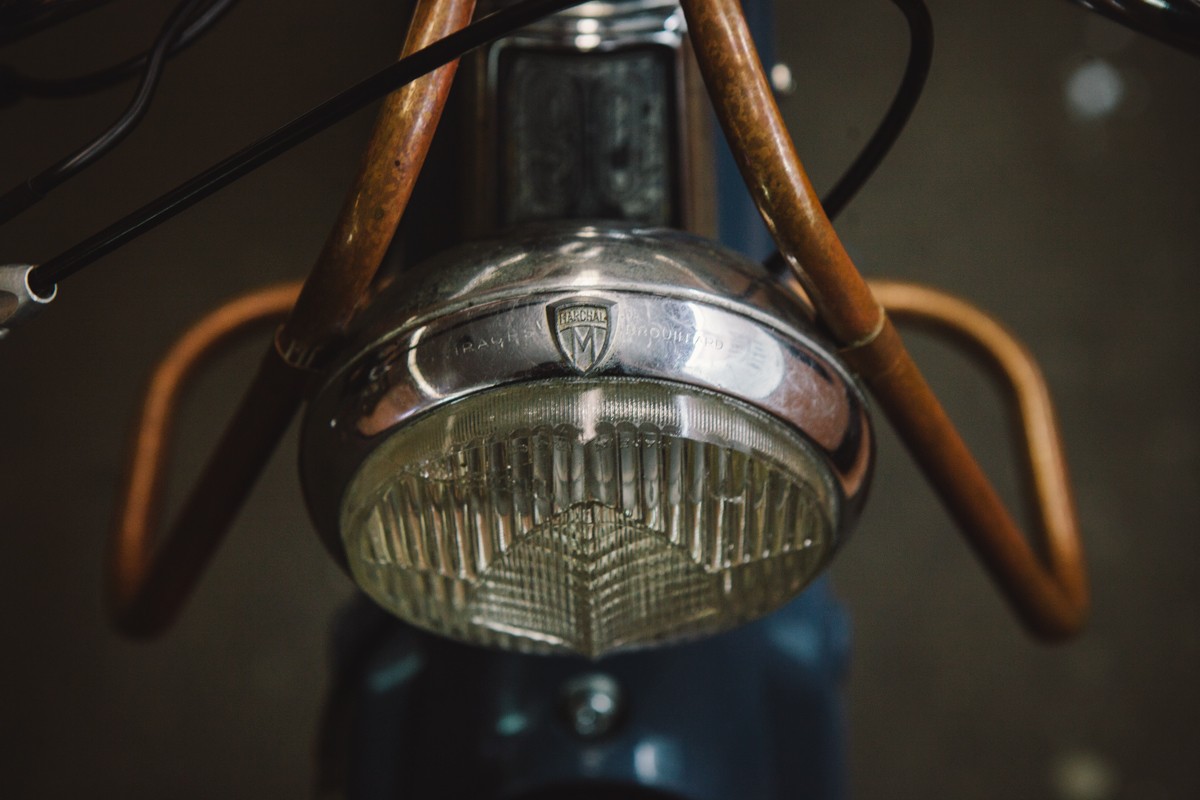 Ryan and Joe’s creation is – or was, a 1970’s Honda C90 Super Cub. Now it’s a minimal, ultra-stylish electric motorcycle. “It was bought for $200 complete (except for a seat and some minor bits) and not running.  The front suspension, front hub, bits of the frame, bits of the rear swingarm, stand and fuel tank cover (the basis for the current seat) are about all that remain of the Cub” Says Ryan.

Both Ryan and Joe studied design together at Uni, and with a combined history and interest in work on BMX bikes, dirt and road motorbikes and cars a interesting build was bound to come out of their friendship. 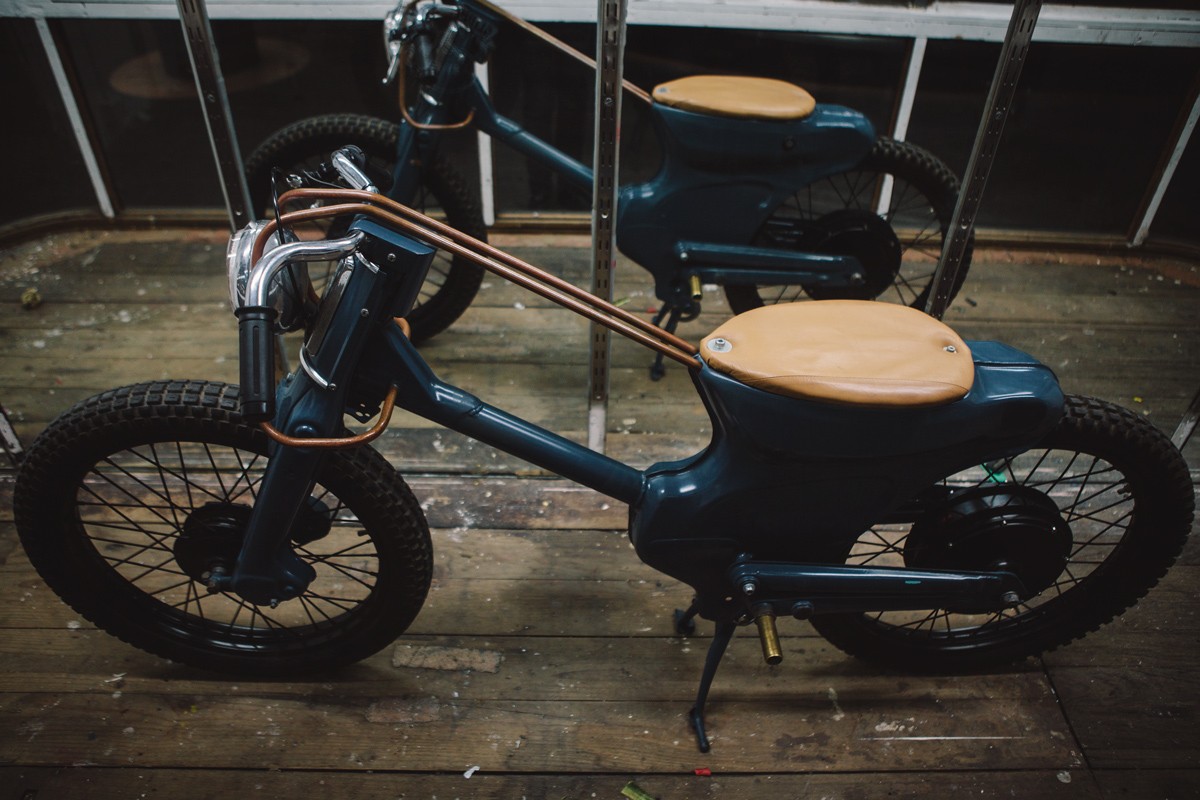 “We have wanted to build an electric for a while, but one that didn’t immediately stand out as an electric conversion.  The batteries on most electric conversions are awkward looking boxy objects that are at odds with the rest of the bike.  We really wanted to avoid this so decided early on that we should work with a press-framed bike in the hope of hiding the majority of the electric components within the frame.  When the Cub came up at the right price we decided that it would be really interesting to take probably the most regularly modified motorbike in the world and try to achieve something different with it.”

It would not be an easy or simple task, as the boys had 5 weeks to complete this bike for the Deus Bike Build Off 2015. They squeezed as many hours as possible after work and on weekends to do as much as possible on the bike, all while on a very meagre budget. “The electric parts were all second hand parts, laying around at work, that I was able to repair for use. We were able plumb the electronic braking (rear wheel) into the front brake lever so that only the one lever was need. Whenever we needed stuff we would go searching through the shed and the factory at work as see what we could use to do the job.” – Joe 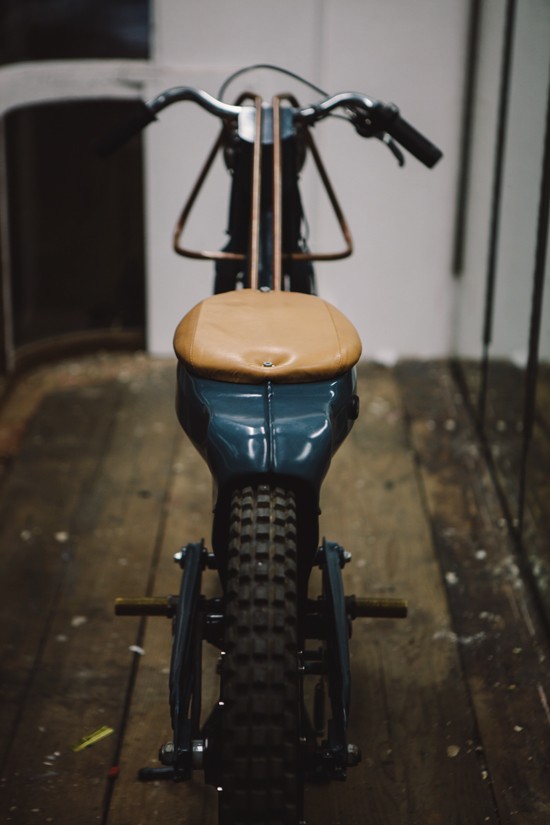 “Everything on the bike was done at home. All of the paint is from rattle cans, the front wheel was hand laced from secondhand parts, handlebars were fabricated from bicycle bars and the seat was trimmed using a vintage leather jacket and an exercise mat.  The piping was bent using a hand tool and the matching pegs are also lightly modified plumbing parts.  The frame and swingarm modifications were welded up on my gasless MIG using bits of another scrap scooter frame and a hot water service side panel left behind by the last owner of my house.  No work was outsourced and no expensive tools or parts were used.” – Ryan

Despite the combined expertise, there were plenty of tricky bits to happen with the build process. The many hours hiding electronics and filing the frame to remove and reminder of the old engine mounting aside, there was the copper piping. “Running the copper piping was probably the most challenging part of the build, if only because neither of us had ever bent copper pipe before.  We worked out where we wanted the piping to mount and where we wanted it to run into the frame, then bent a piece of all-thread bar into roughly the desired shape to get a feel for how it would look.  Having done that we took one of the 3 lengths of copper pipe that we’d bought and started bending it to shape using a plumbers hand bender. 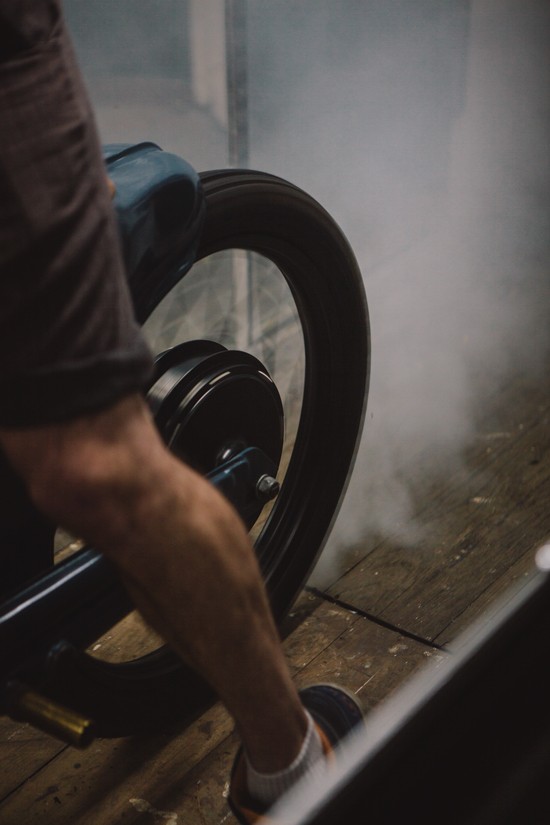 The intention was to use this as a test piece and use the remaining 2 lengths as the final parts.  Unfortunately (or fortunately) the first pipe ended up exactly as we’d desired, which meant that we had to work out how in the hell to replicate it in mirror!” – Ryan

It would be hard to imagine anyone would initially realise that this machine is indeed an electric bike upon first impression. It can sit happily around other custom motorbike builds, and has at the Deus Bike Build Off and Throttle Roll 2015. The lack of motor is something that will no doubt be noticed first, and sure enough the lack of a gear lever, clutch, and other motorcycle must haves are missing. It’s a truly unique build that can hold its own. 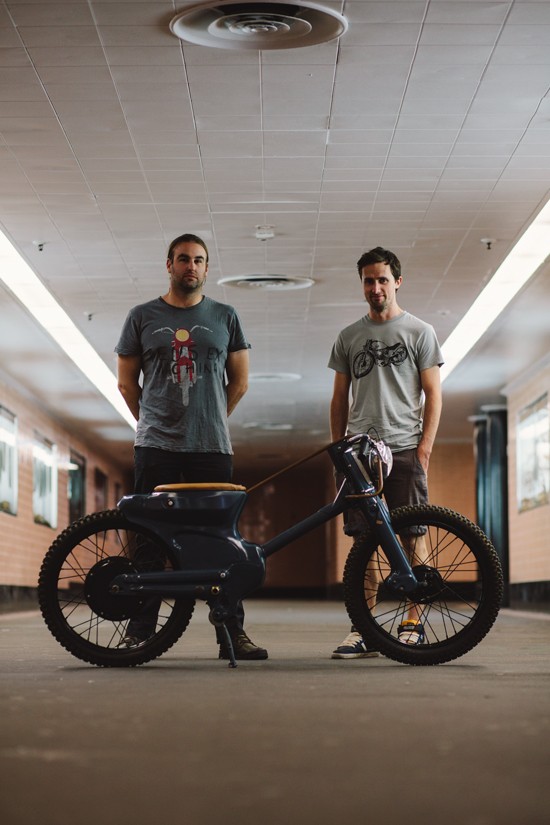 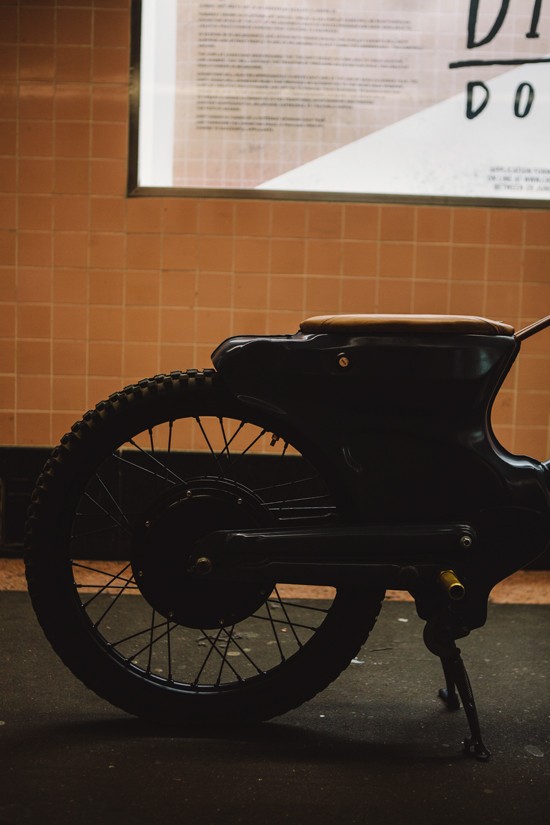 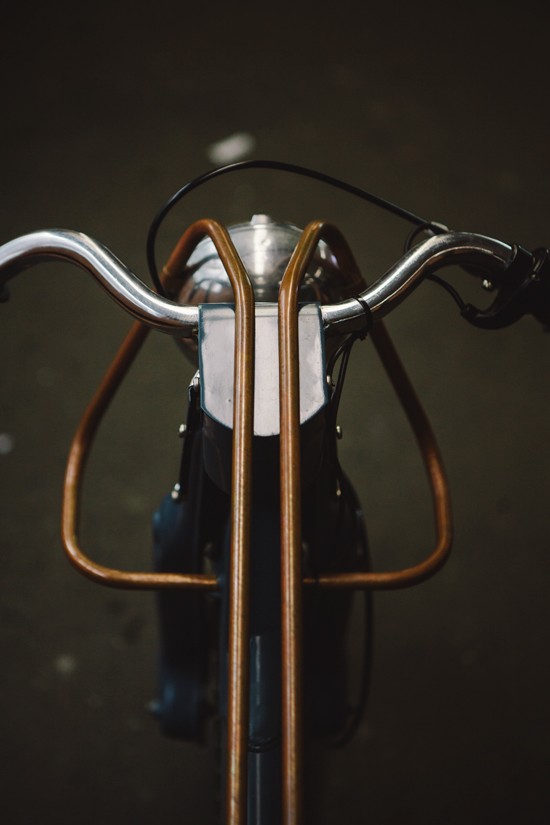 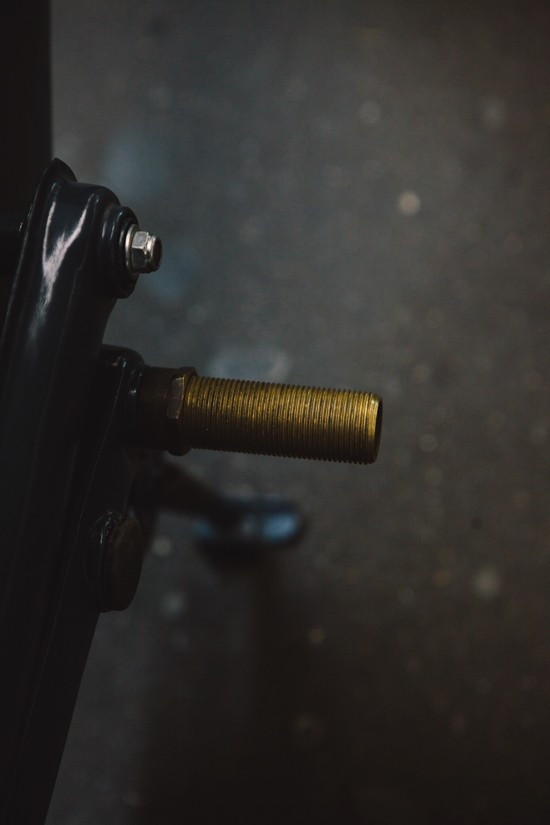 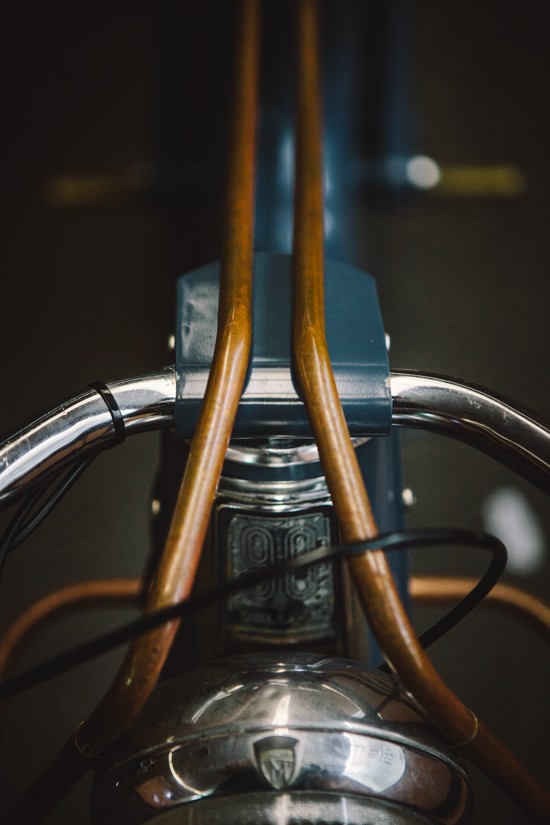 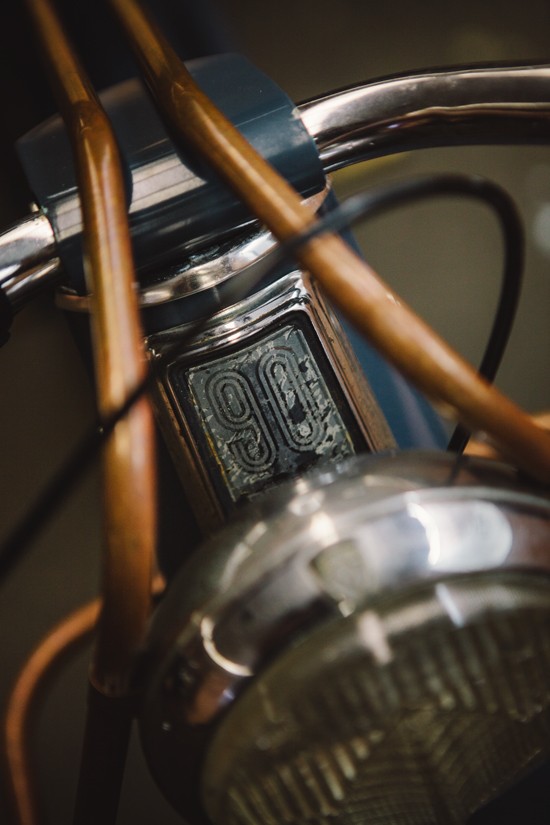 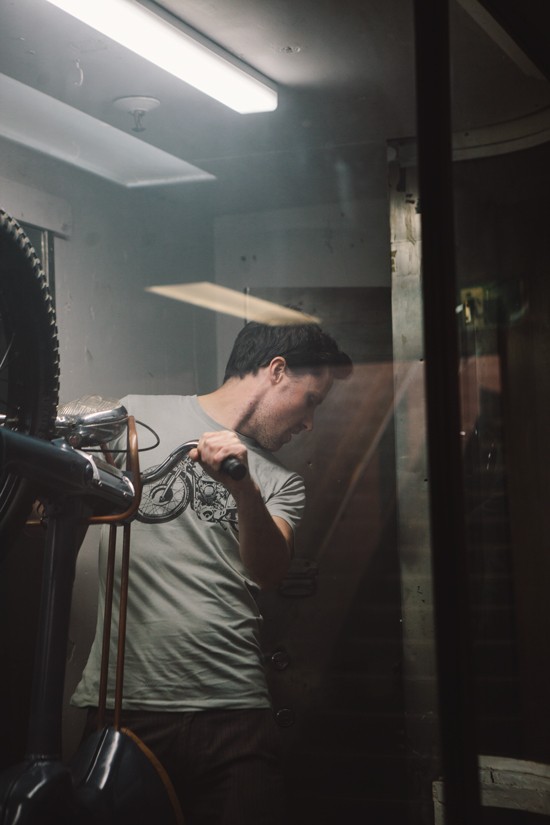 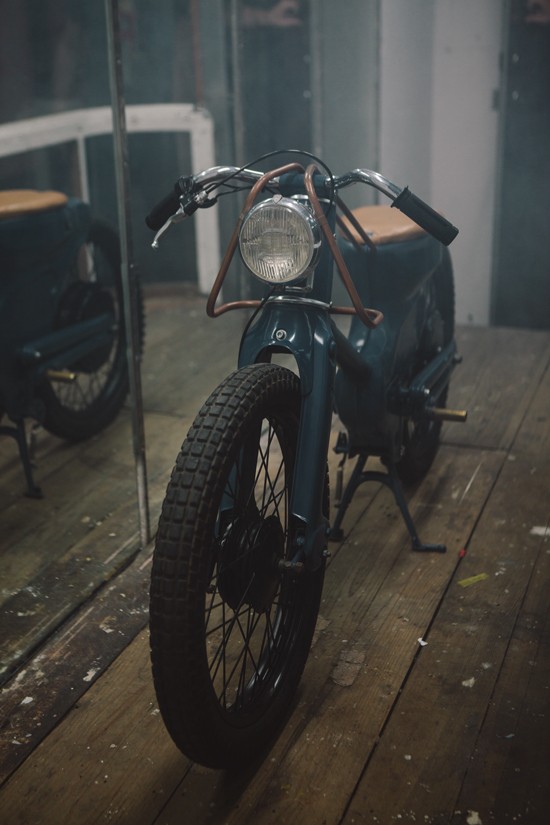 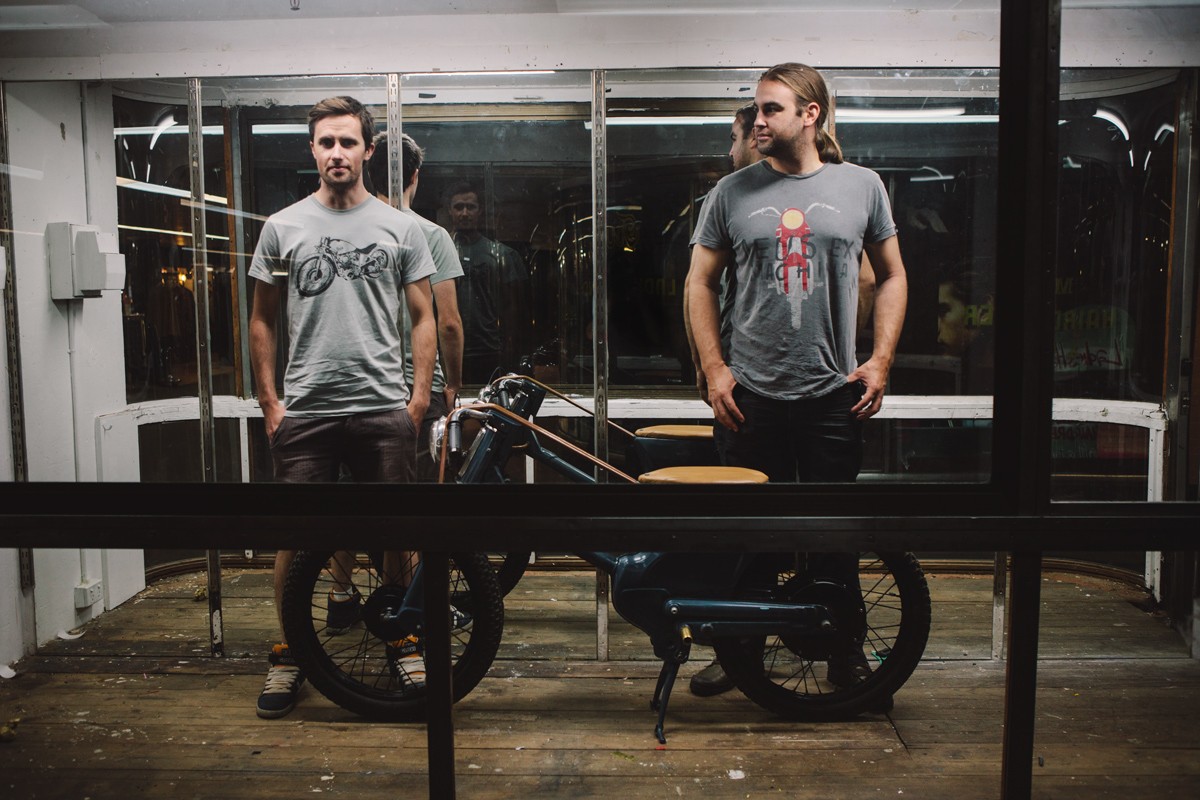 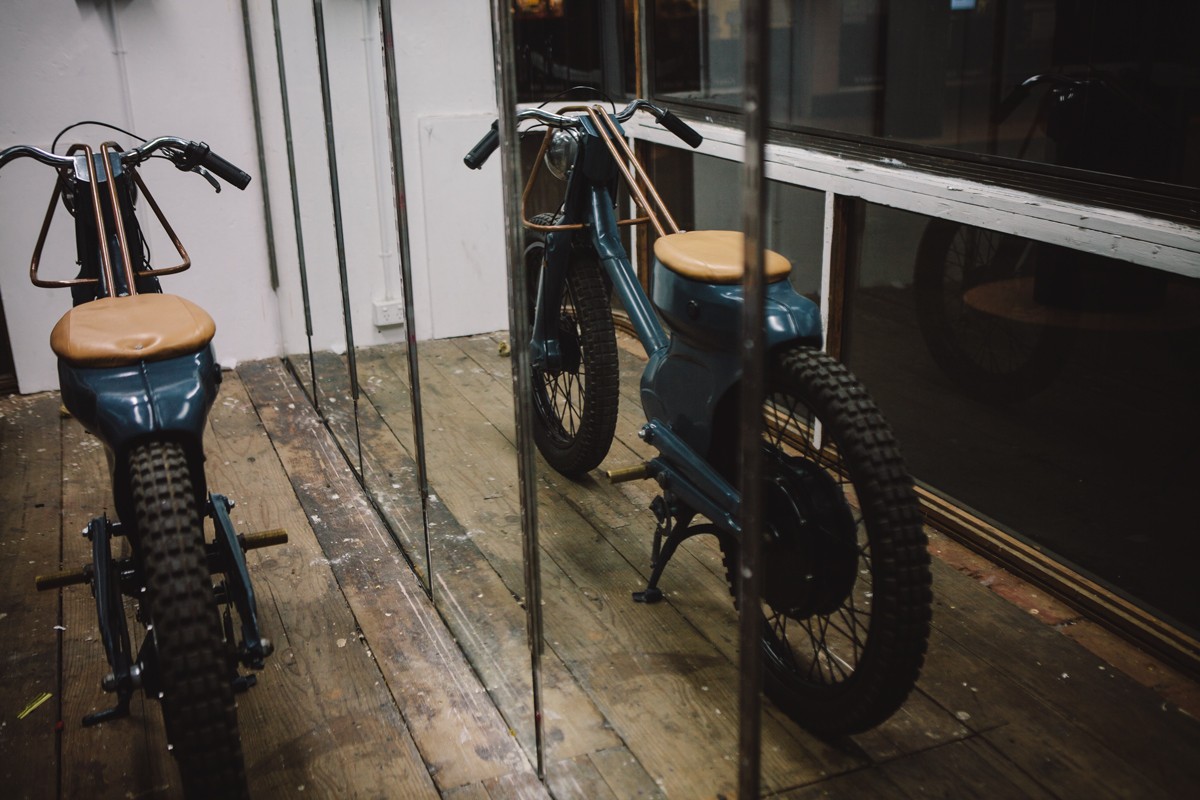 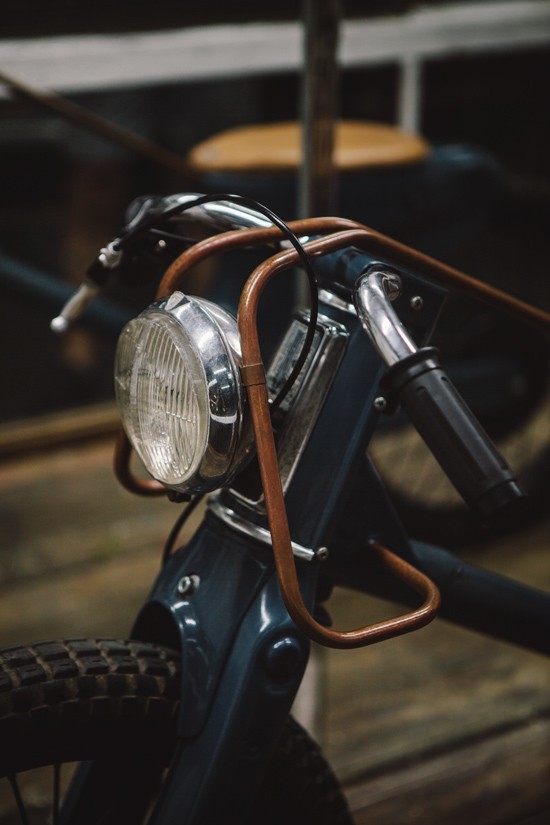 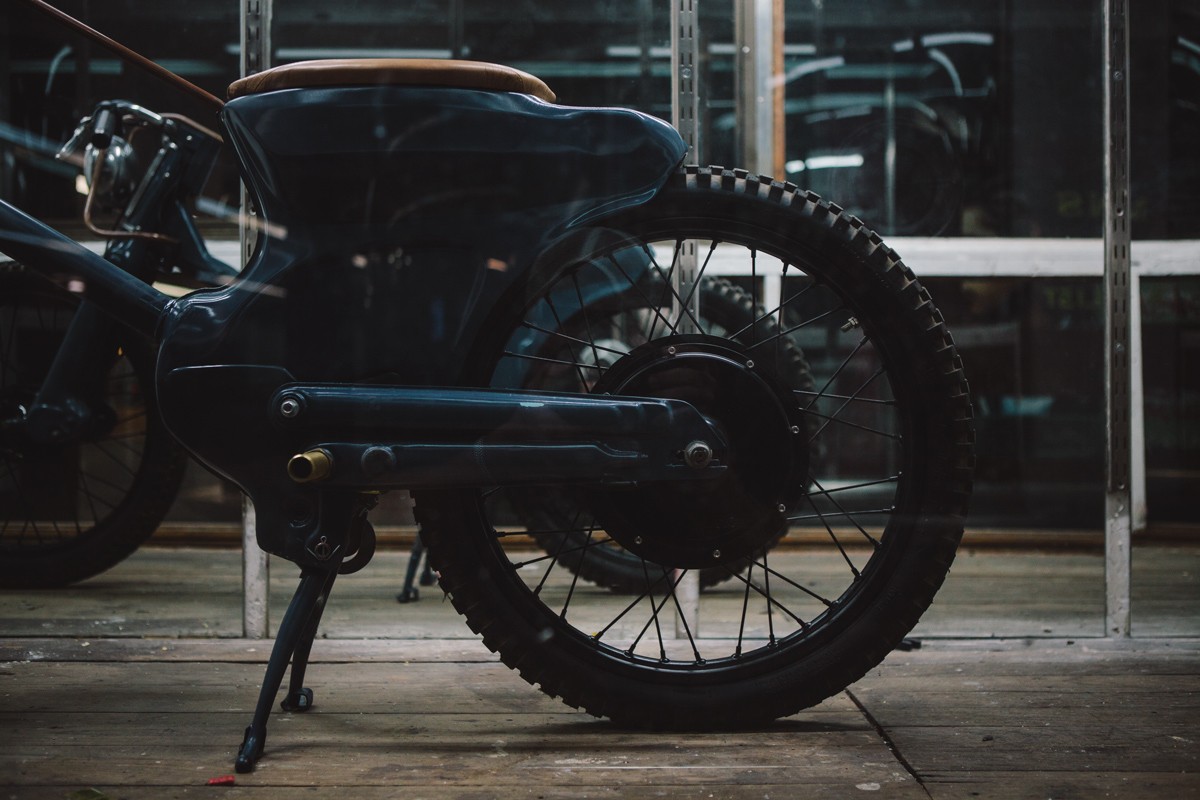 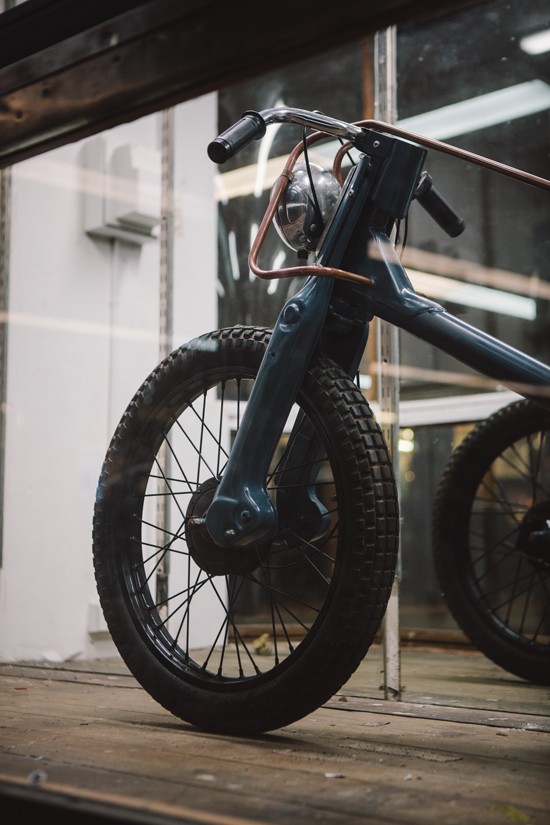 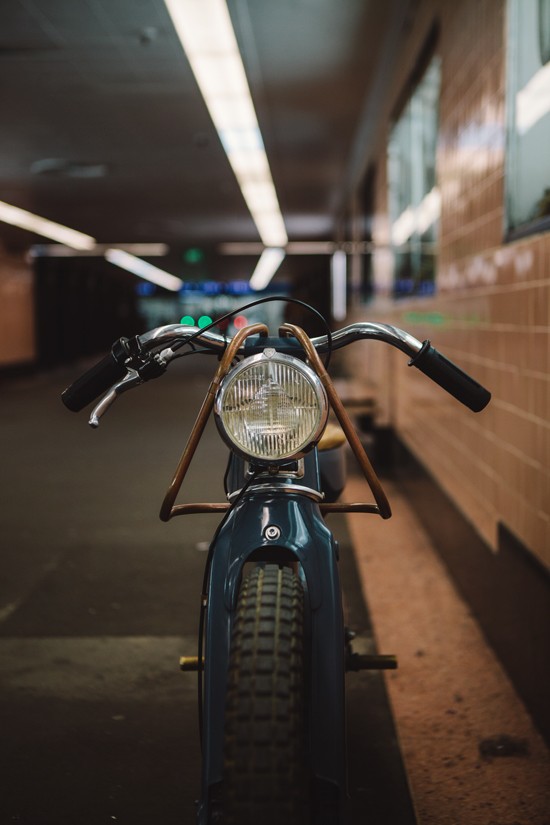 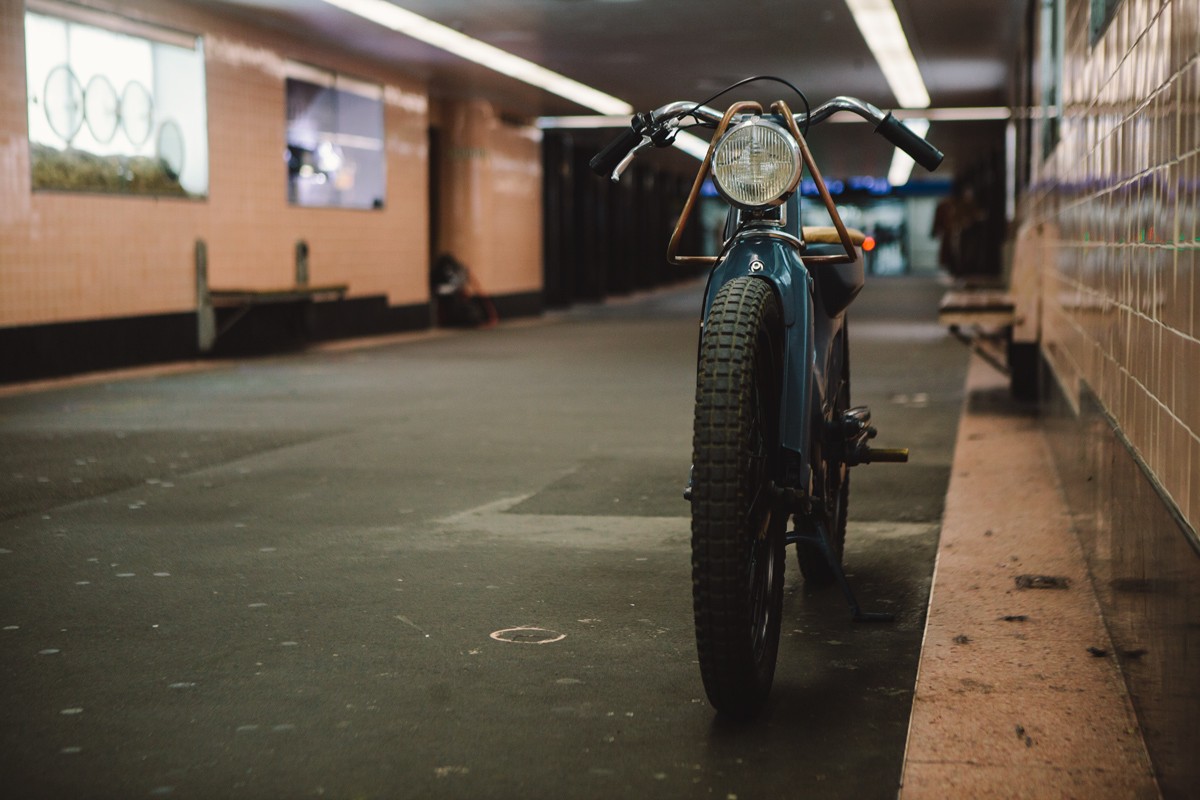