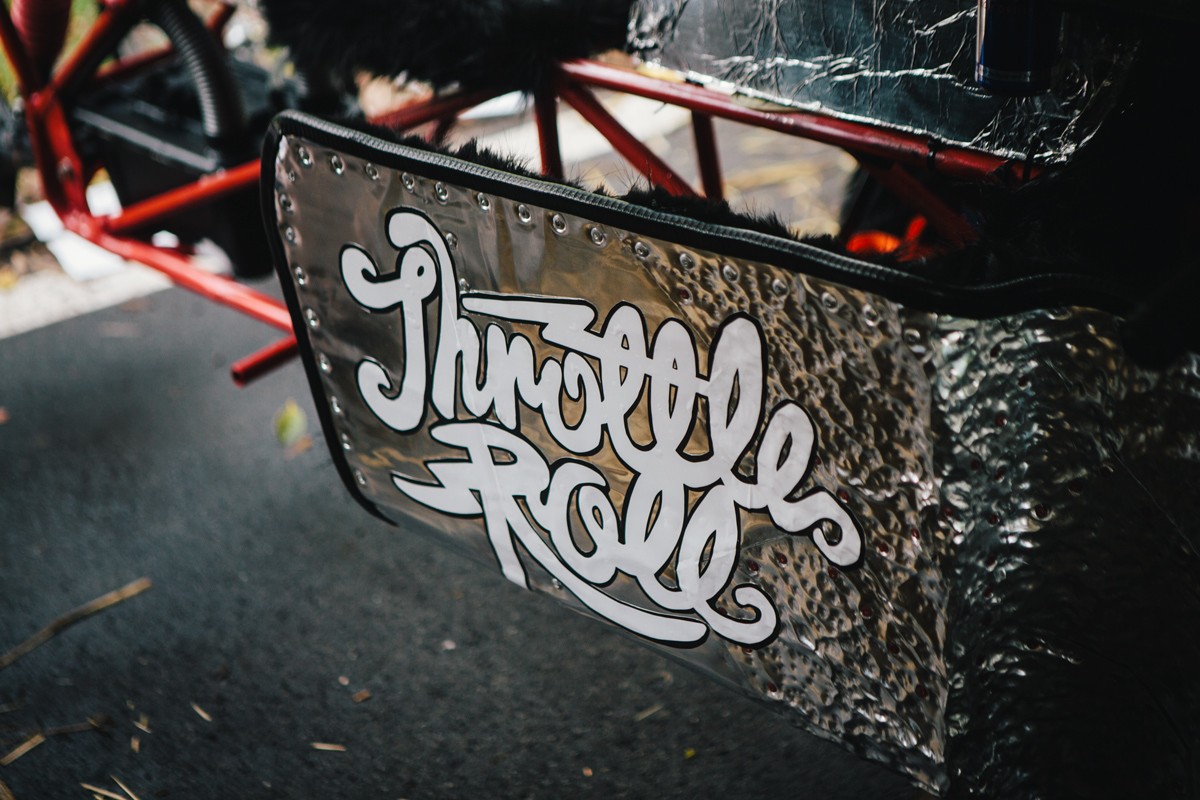 On Sunday the 15th of November, hundreds of Sydneysiders gather at Centennial Park for the 2015 Red Bull Billy Cart. Much like crowds at the Colosseum in ancient Rome, the spectators cheered and screamed for entertainment – and in turn they received plenty from the brave and foolish souls that hurtled down the hill on these eccentric death traps.

The soggy weather didn’t put a dampener on the turnout or the fun that was had on the day. An 800m downhill strip of road in Sydney’s Centennial Parklands would be the track for the day, with over 50 billy carts to fly (and crawl) downwards to victory or disaster. The themes, outfits and builds on the day spanned from the more serious, high effort builds to those that took a more fun and eccentric approach. 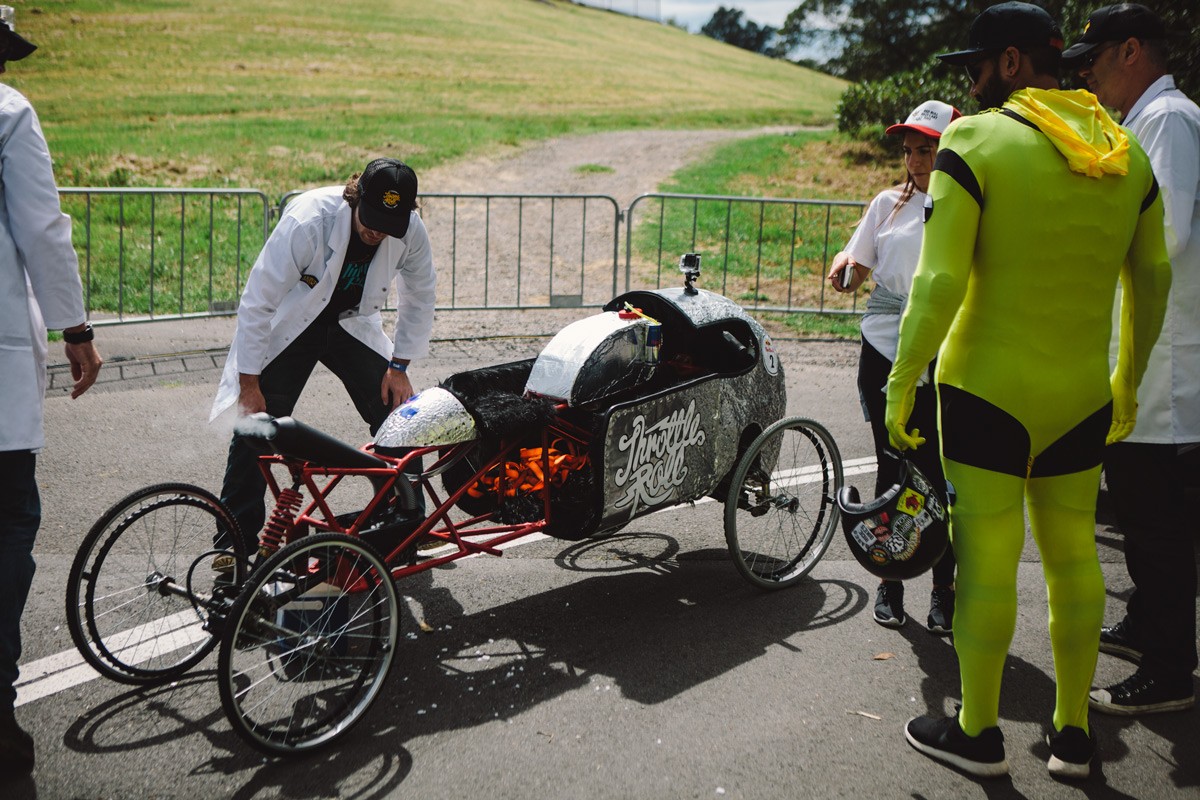 The track featured a chicane, a wall ride and finally the hero jump. The jump would prove to be the ultimate test for these billy carts, and all the month’s preparation in building could all come crashing down on a heavy landing. Many of the carts gathered good speed going down the hill after a hefty push from their pit crew, although some evidentially didn’t do a test run prior to the event and barely crawled down – much to the entertainment/boredom of the punters lining the barricades.

Team Throttle Roll, consisting of Paul Ricketts, Danny Stace, Mark Hawwa and Jon Man (special mention Geoff O’Toole, machining extraordinaire) had an early start, being the 2nd cart to come down the hill that day. Mark, the pilot of this shining death machine zipped down the hill with good speed, landing the jump as he powered towards the finish line. Like a lot of home Café Racer builds however, something had to go wrong. Sure enough, the brakes failed, – although thankfully some strategically placed piles of hay saved Mark from any serious pain, and provided the crowd with an entertaining frontwards flying dismount. 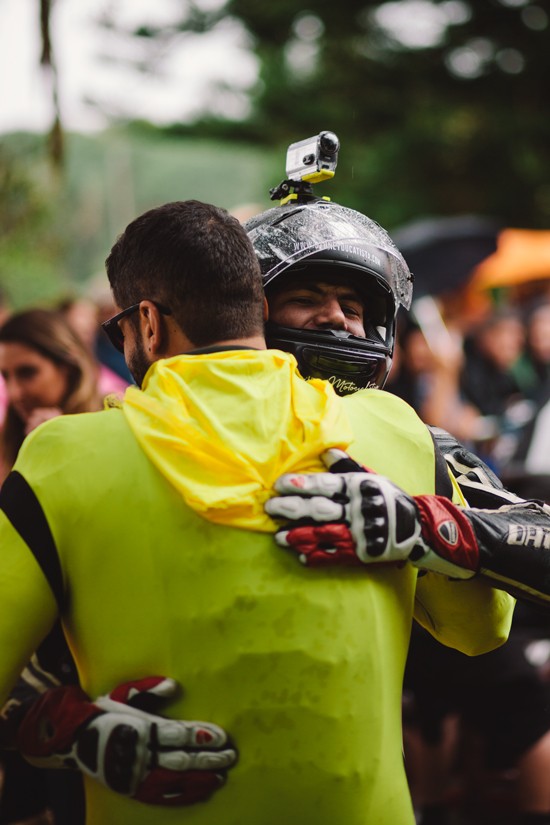 The crowd absolutely loved the effort and entertainment all the entrants put into the day. Months of hard work were paying off and there were smiles lining the track all the way down to the finish line. The crowd favourite (and Throttle Roll favourite) on the day was definitely ‘Dinner For 2’, a cart that was nothing more than a small dining table on wheels. Sat at this table was a very sturdy looking sheila, and “her” handsome date. As they careened down the track they lovingly shared some spaghetti, pizza and red wine. The sight of meatballs flying after them once they landed the jump (and subsequently broke their table) will be forever etched in everyone’s minds.

Four judges made their assessment on each entrant, based on creativity, quality, speed and entertainment. At the end of the day, 3rd, 2nd and 1st place were handed out, which each team taking home thousands of dollars in prizes. The Sydney Harbour Bridge billy cart would prove to be the victor at the end of the day, and they graciously shared their victory champagne with all those unfortunate enough to be within spraying distance. 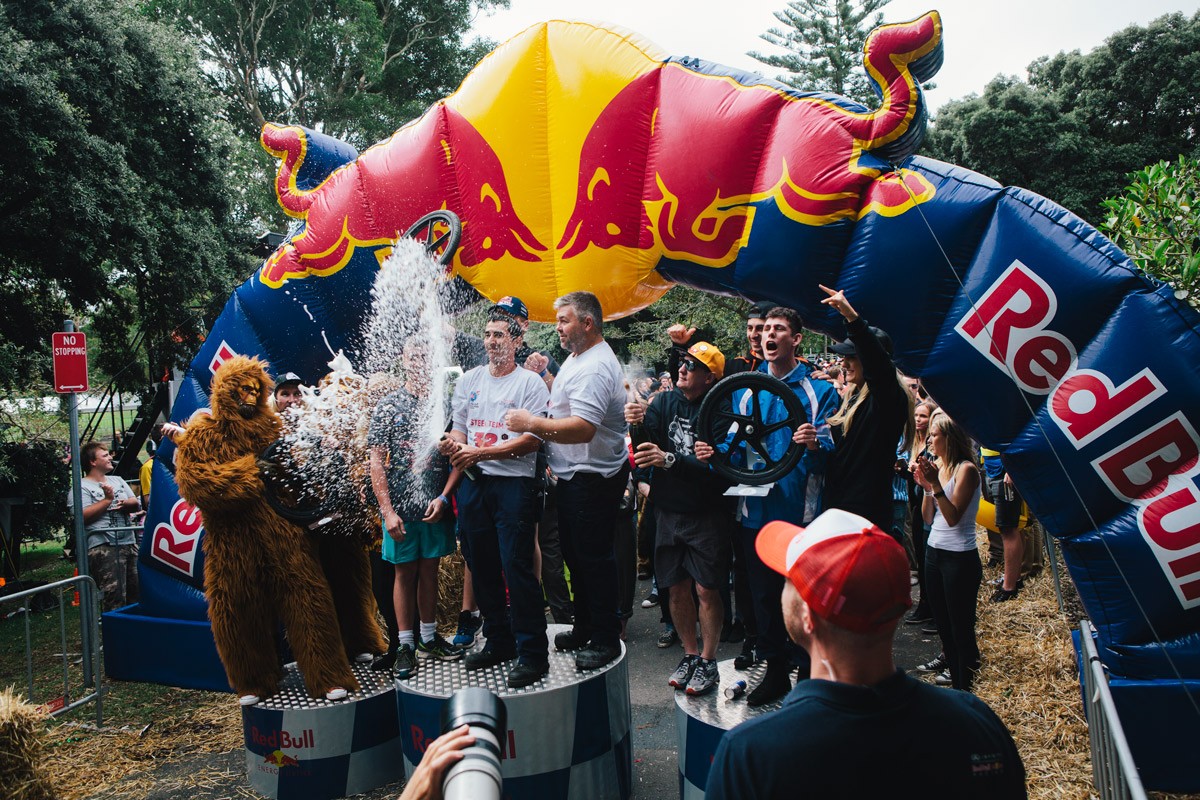 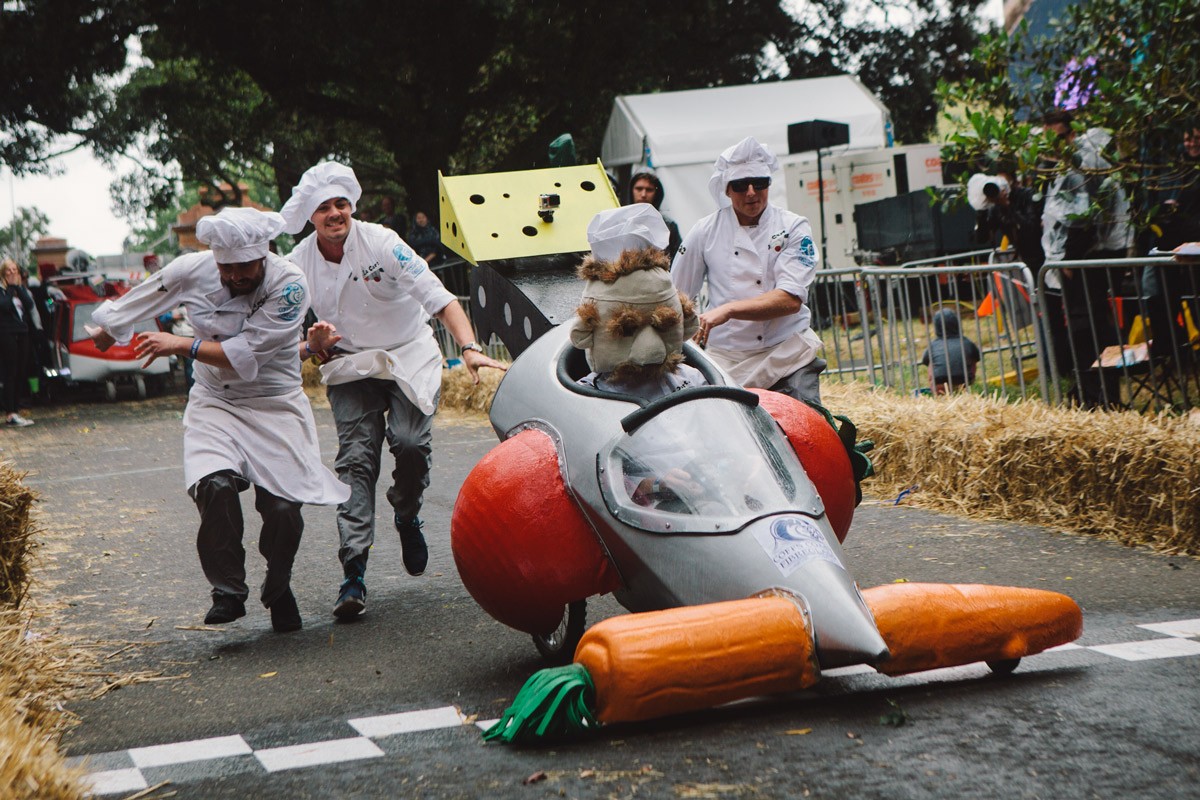 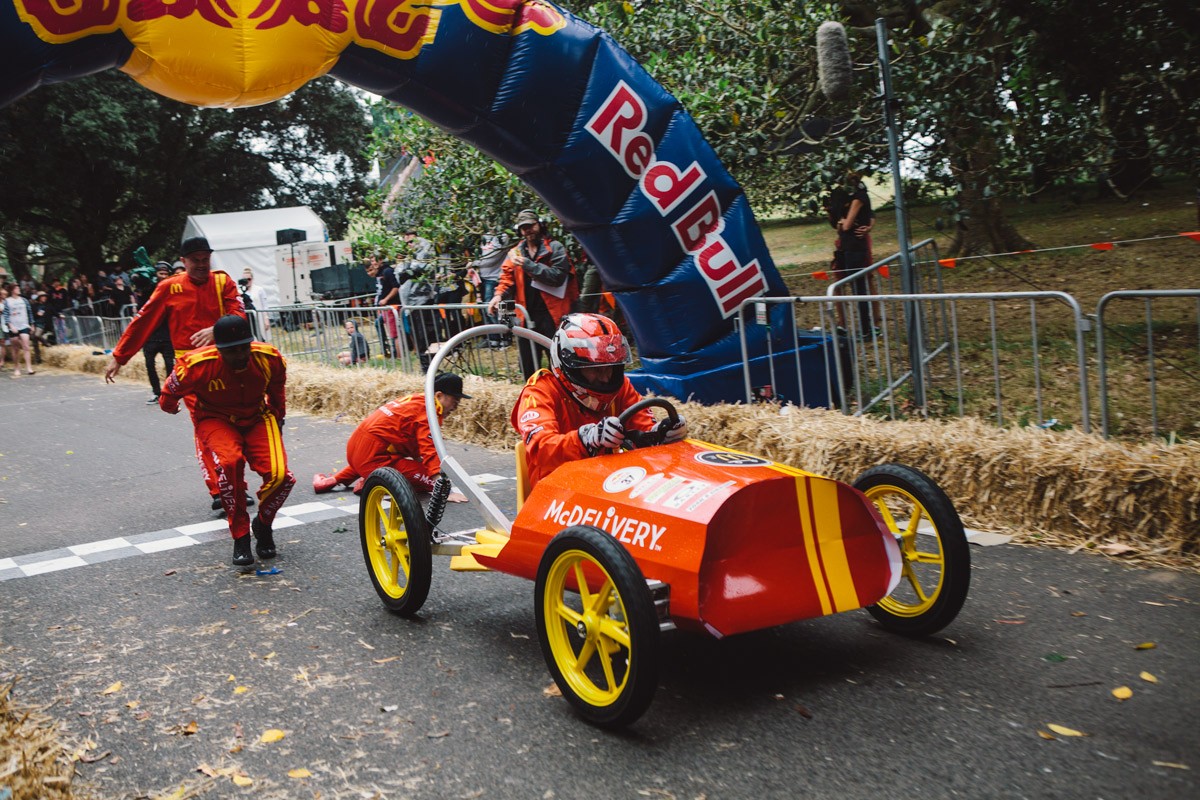 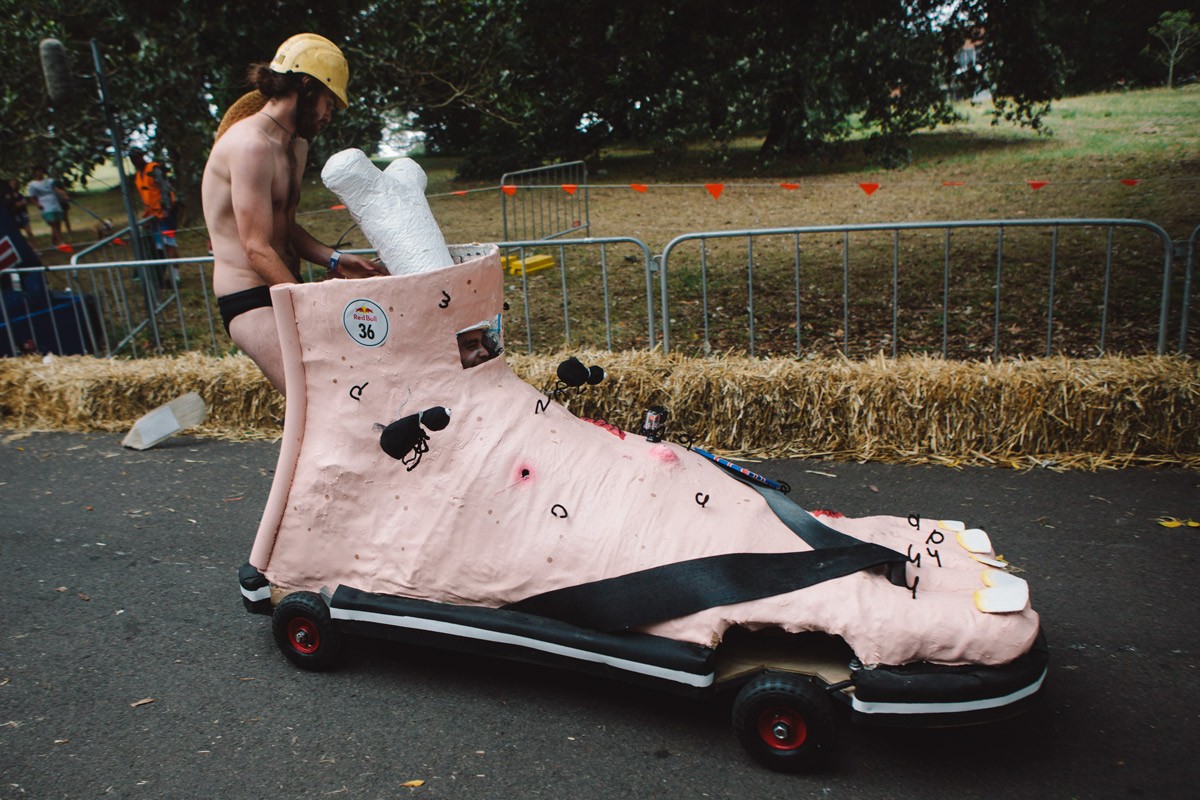 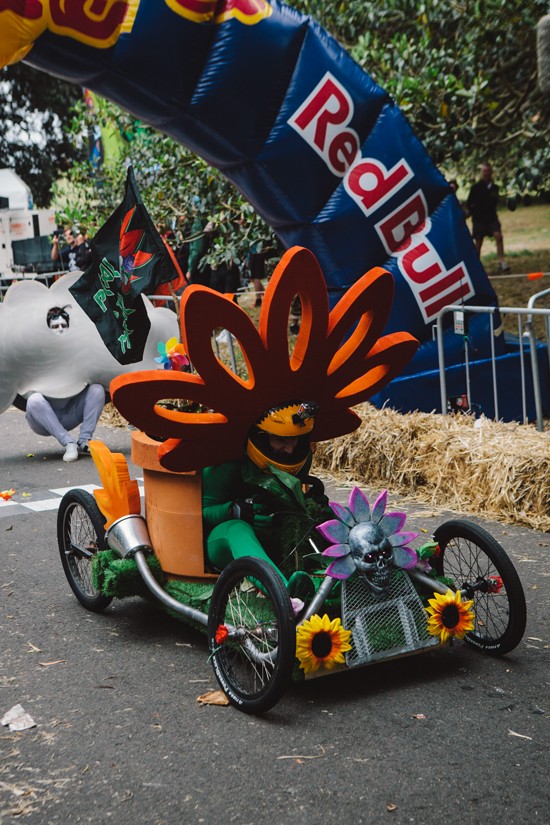 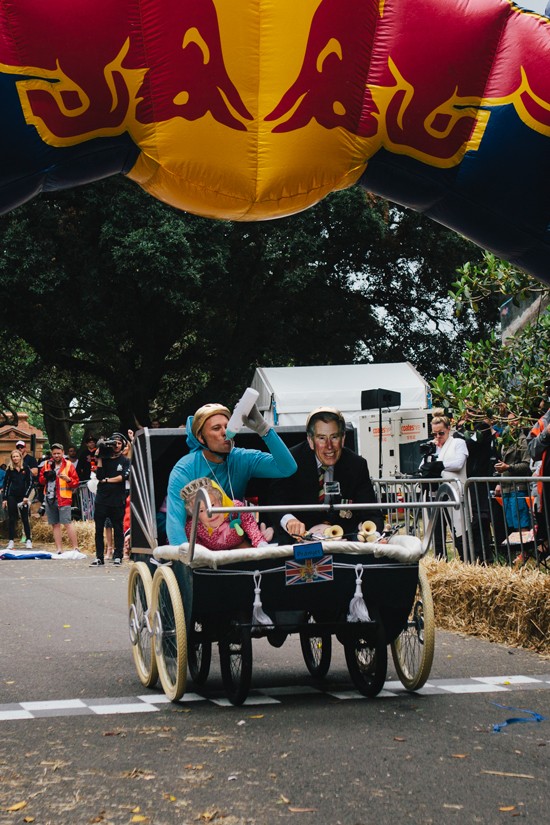 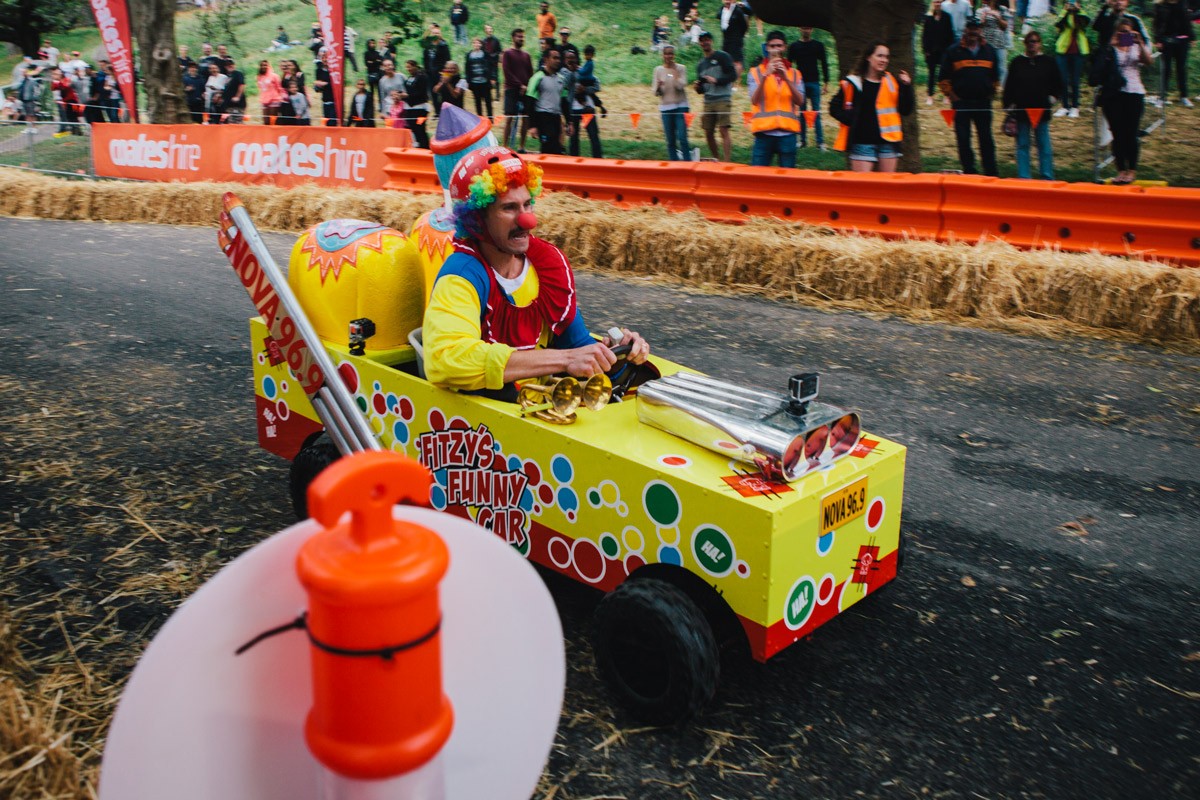 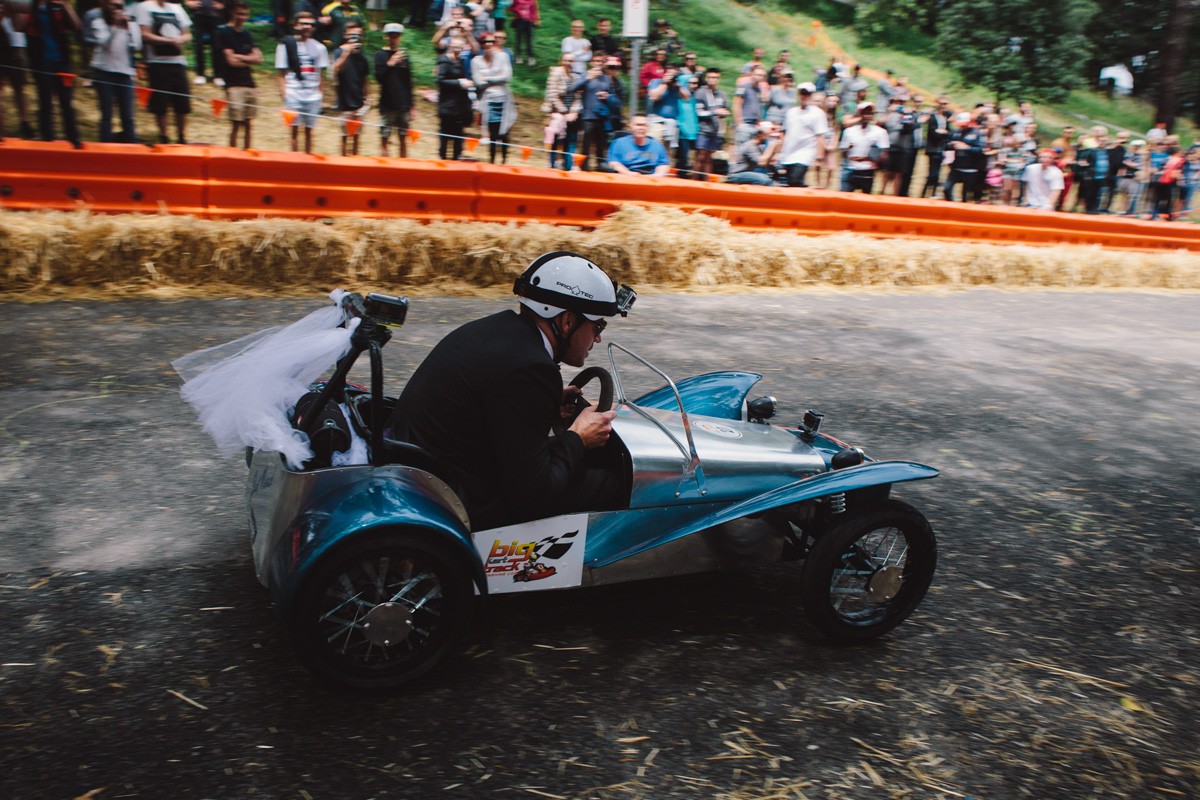 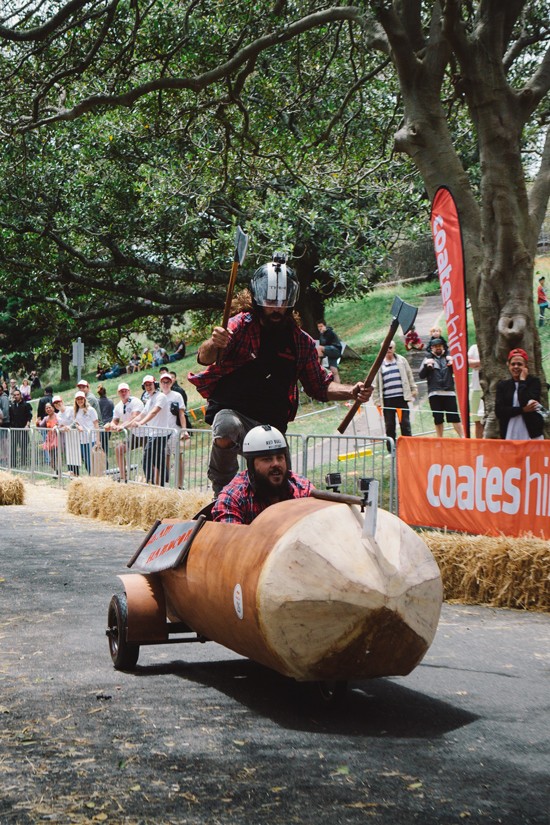 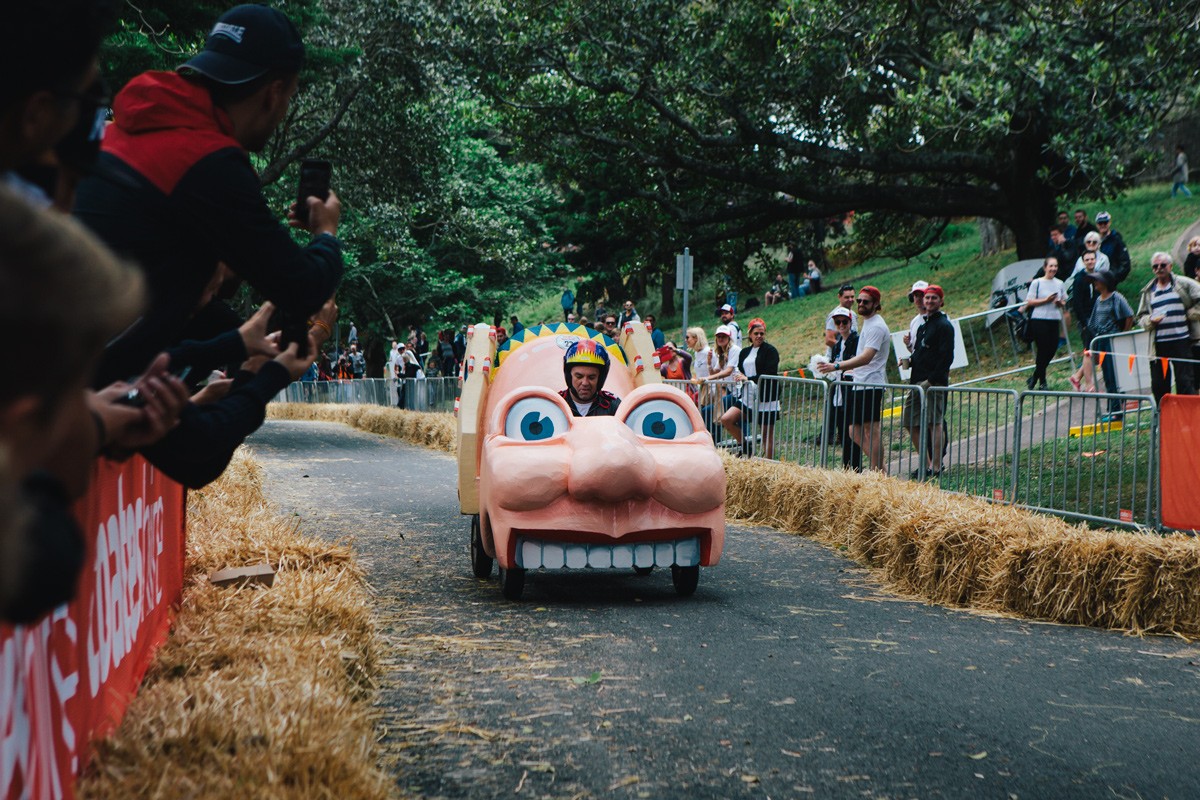 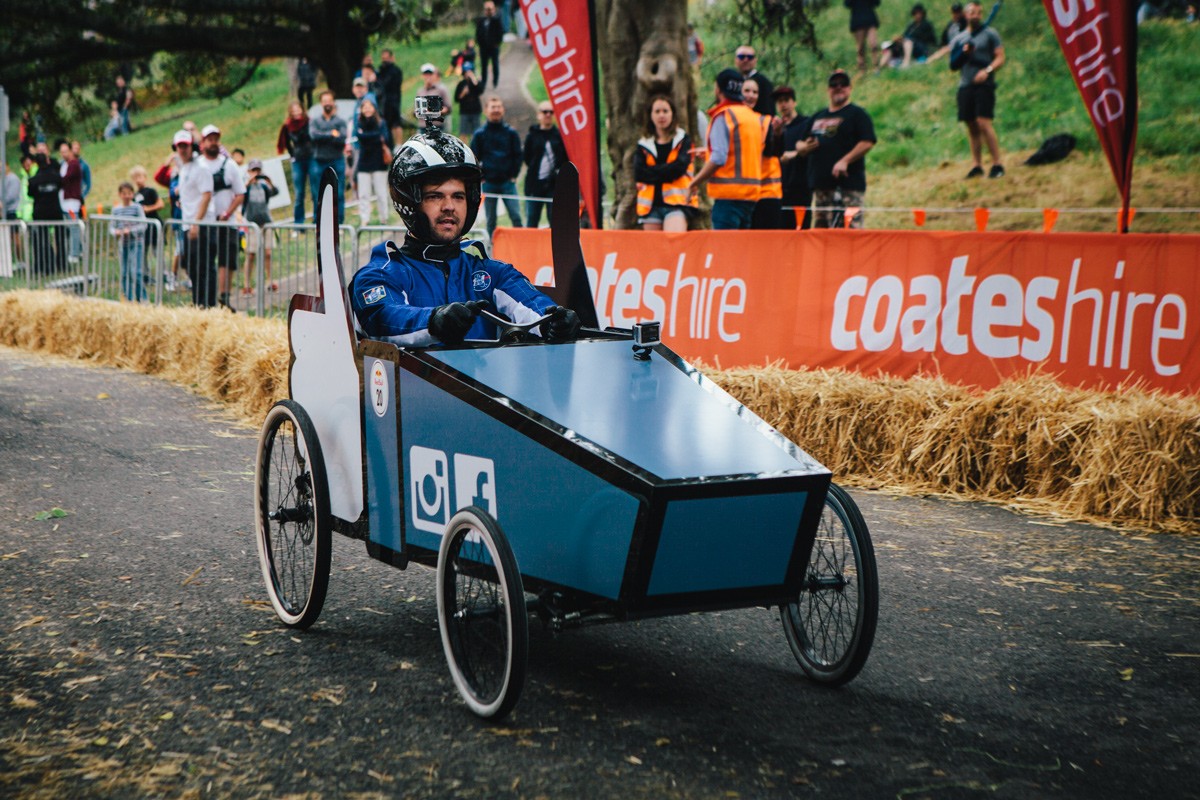 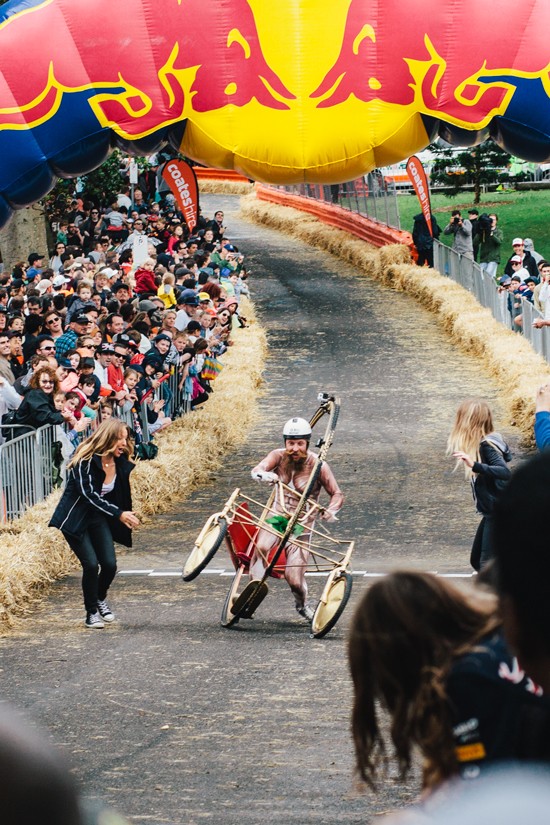 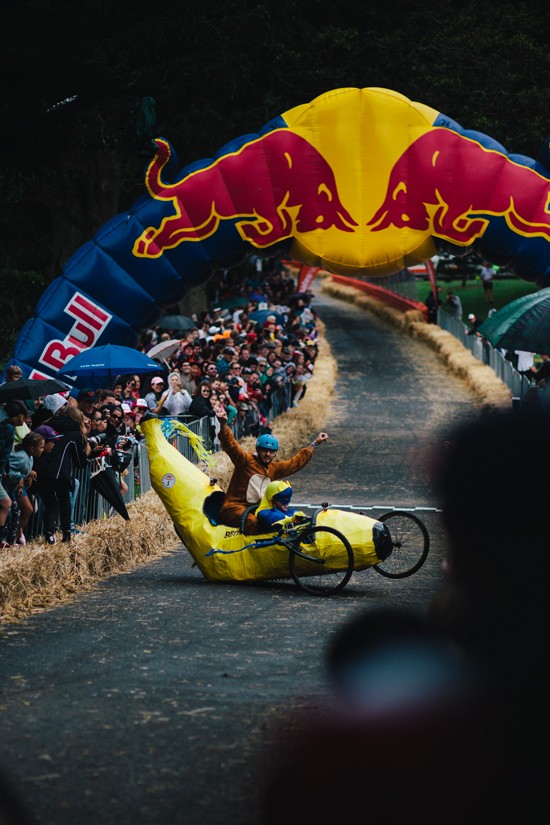 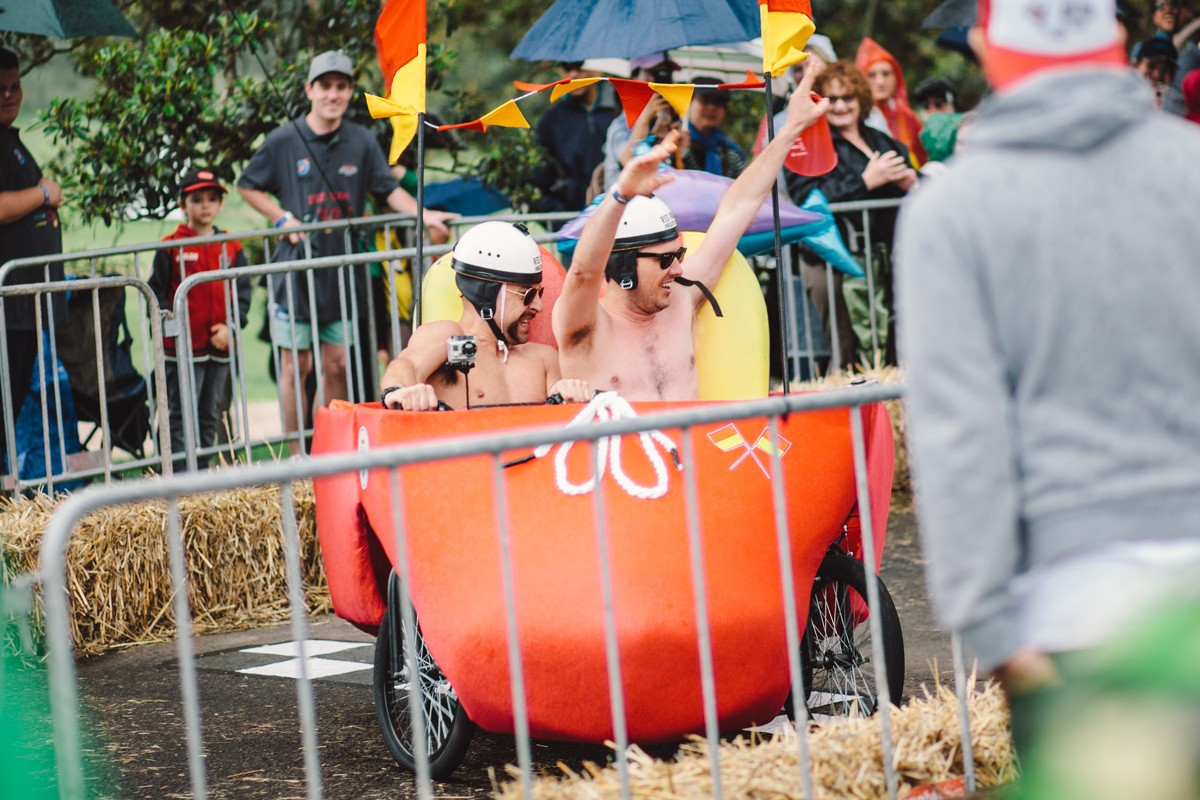 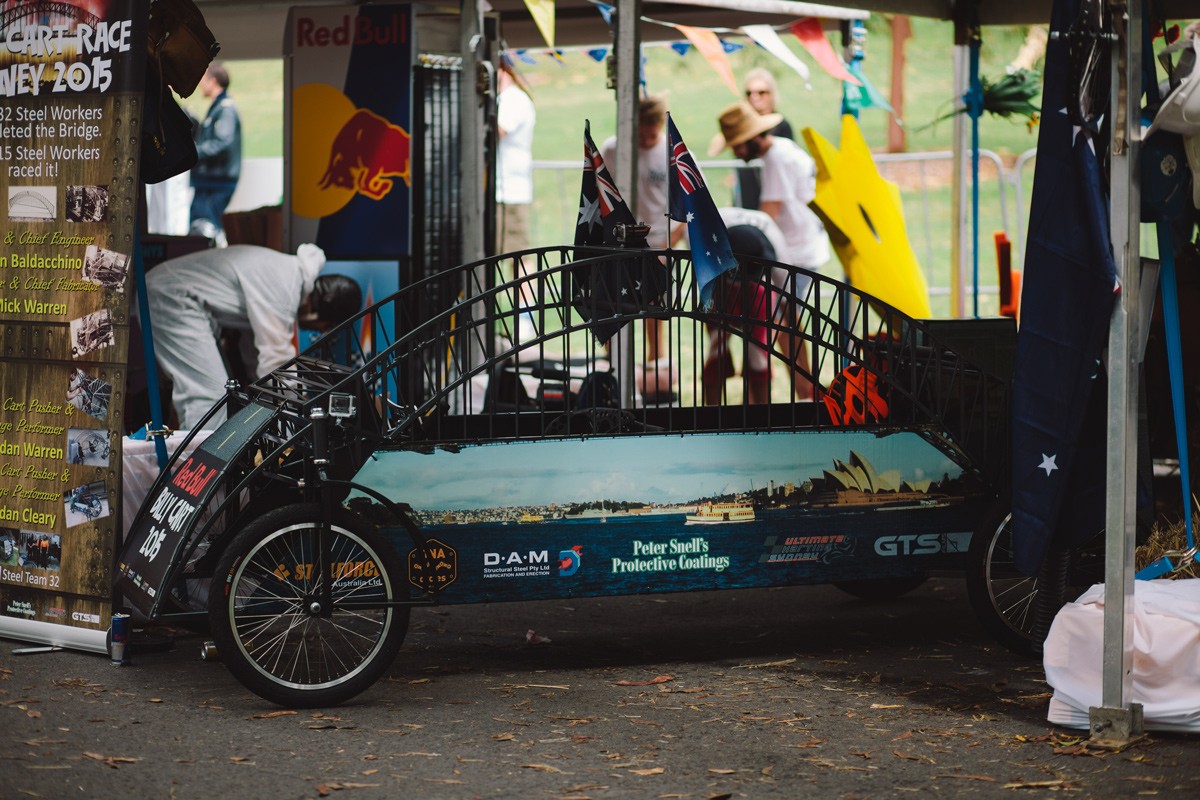 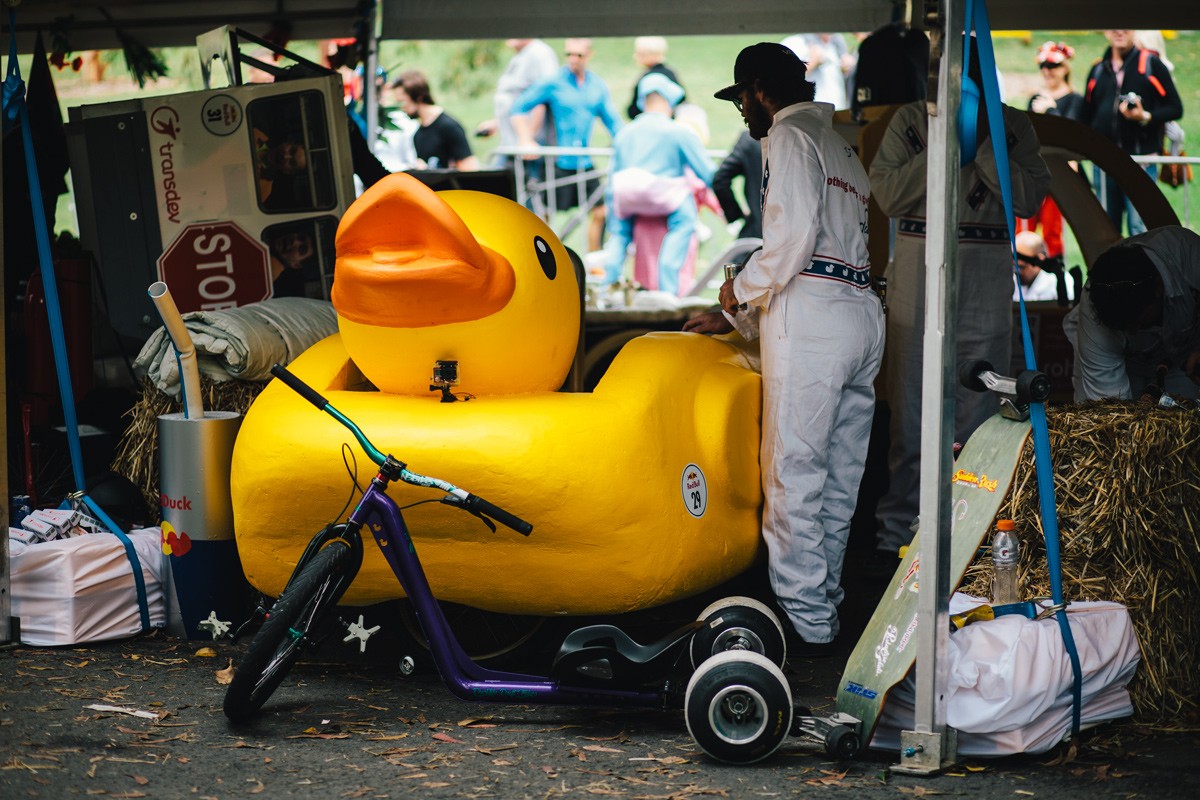 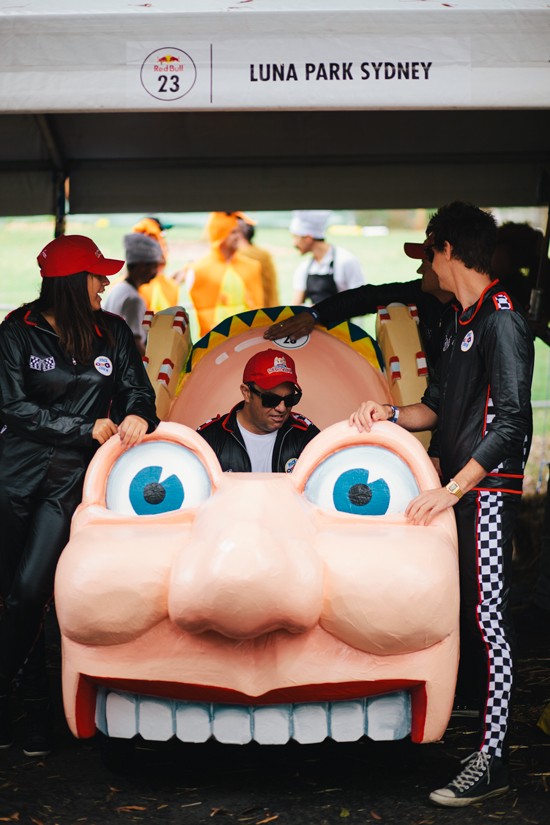 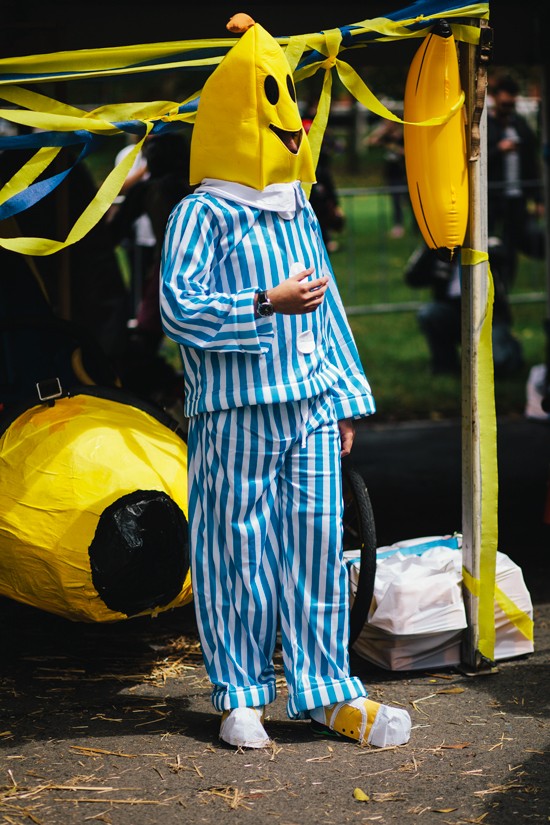 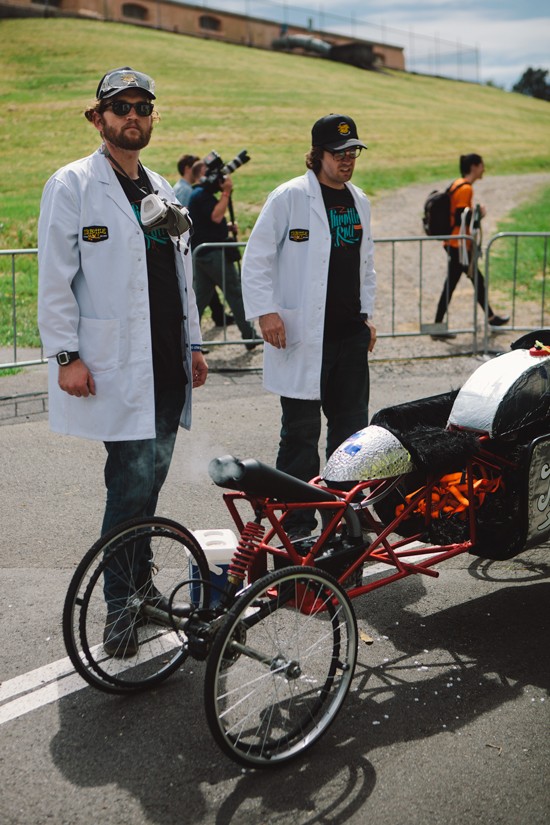 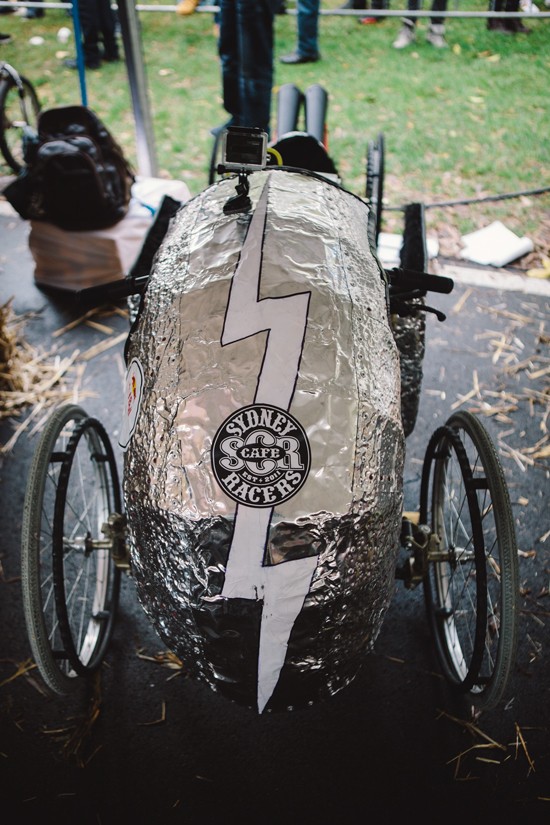 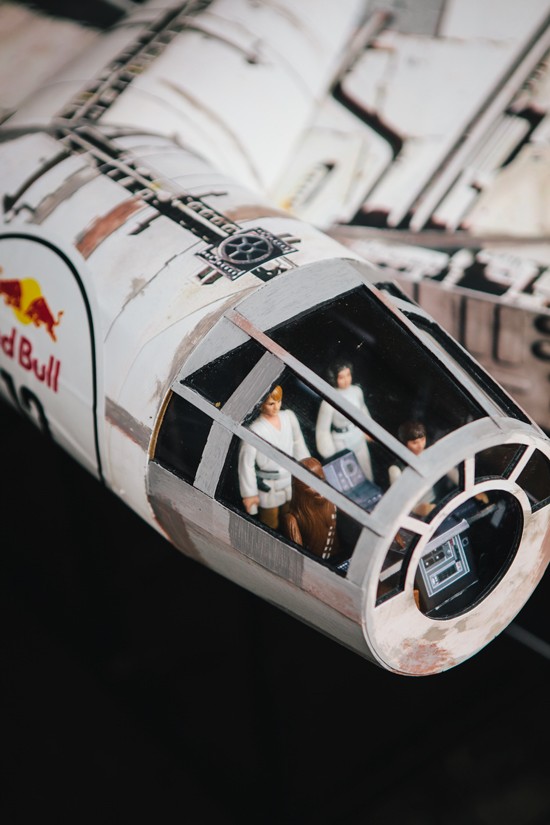 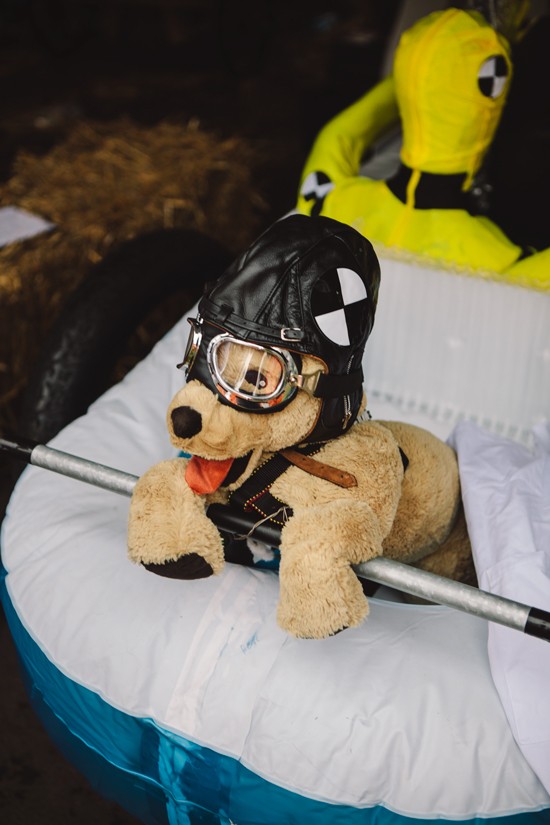 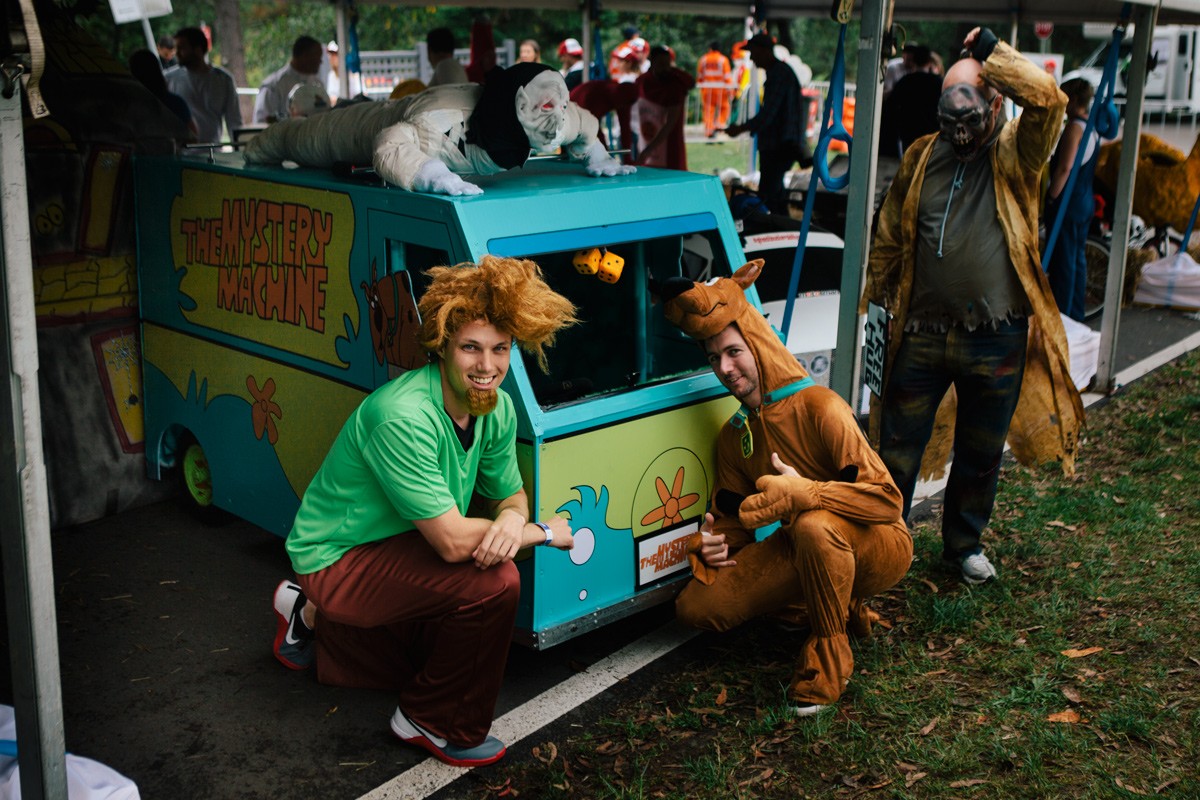 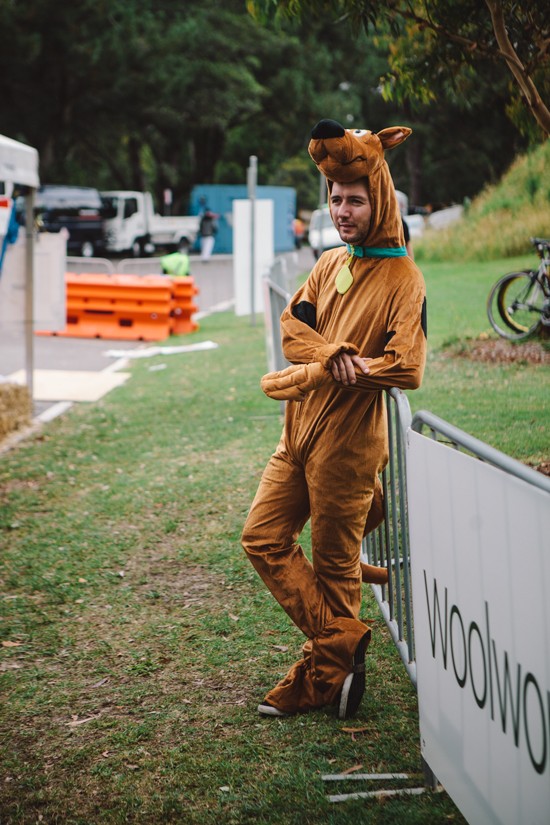