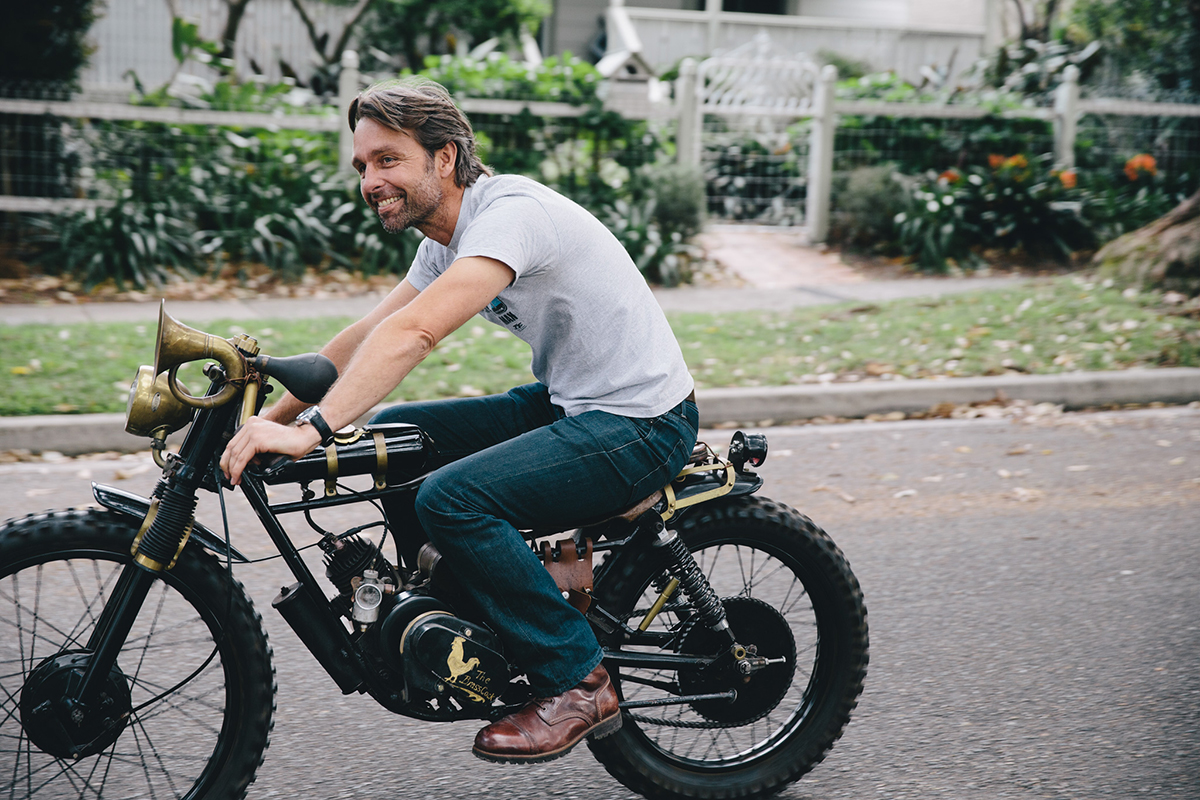 The machines and contraptions that are created by Ian could quite easily be something that escaped from a Miyazaki film, with as much technical thought and skill being applied as creativity. It’s an exciting amalgamation of disciplines that has lead to eccentric machines such as this – The Brass Cock. A 1930’s lawnmower transplanted into an old dirt bike frame. Sure, why not? 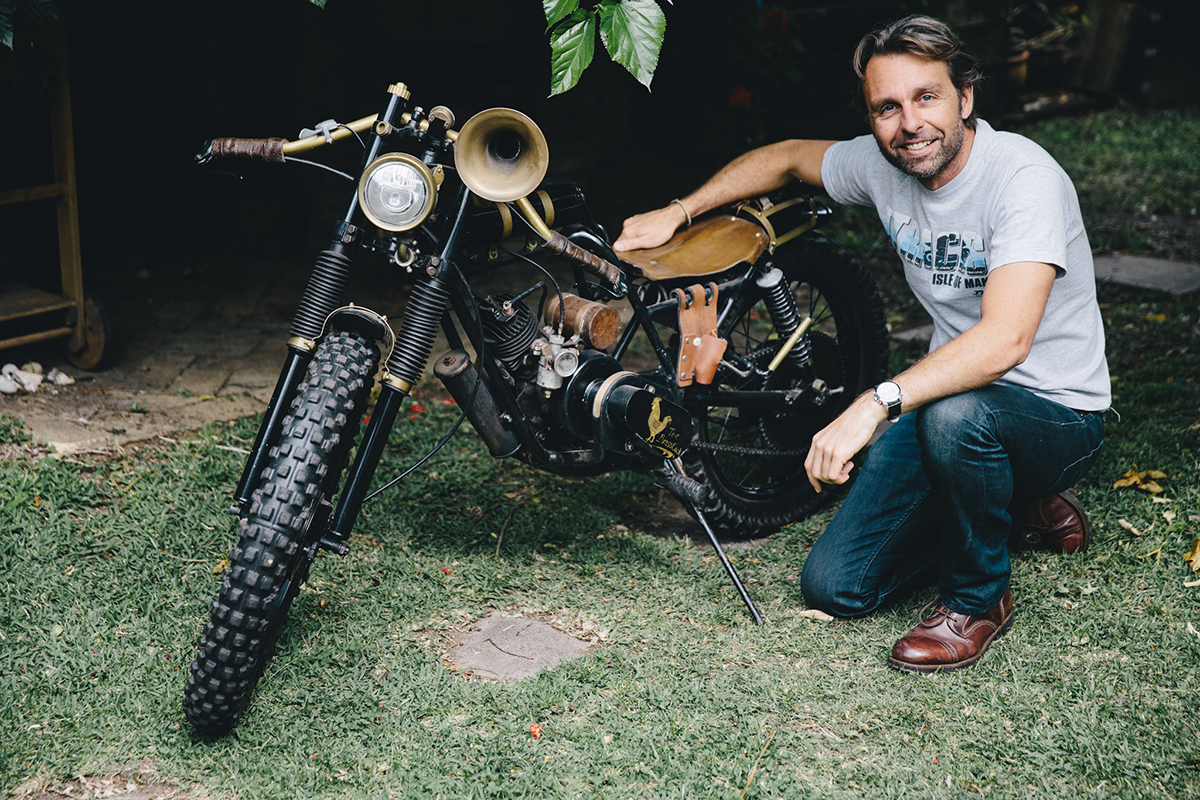 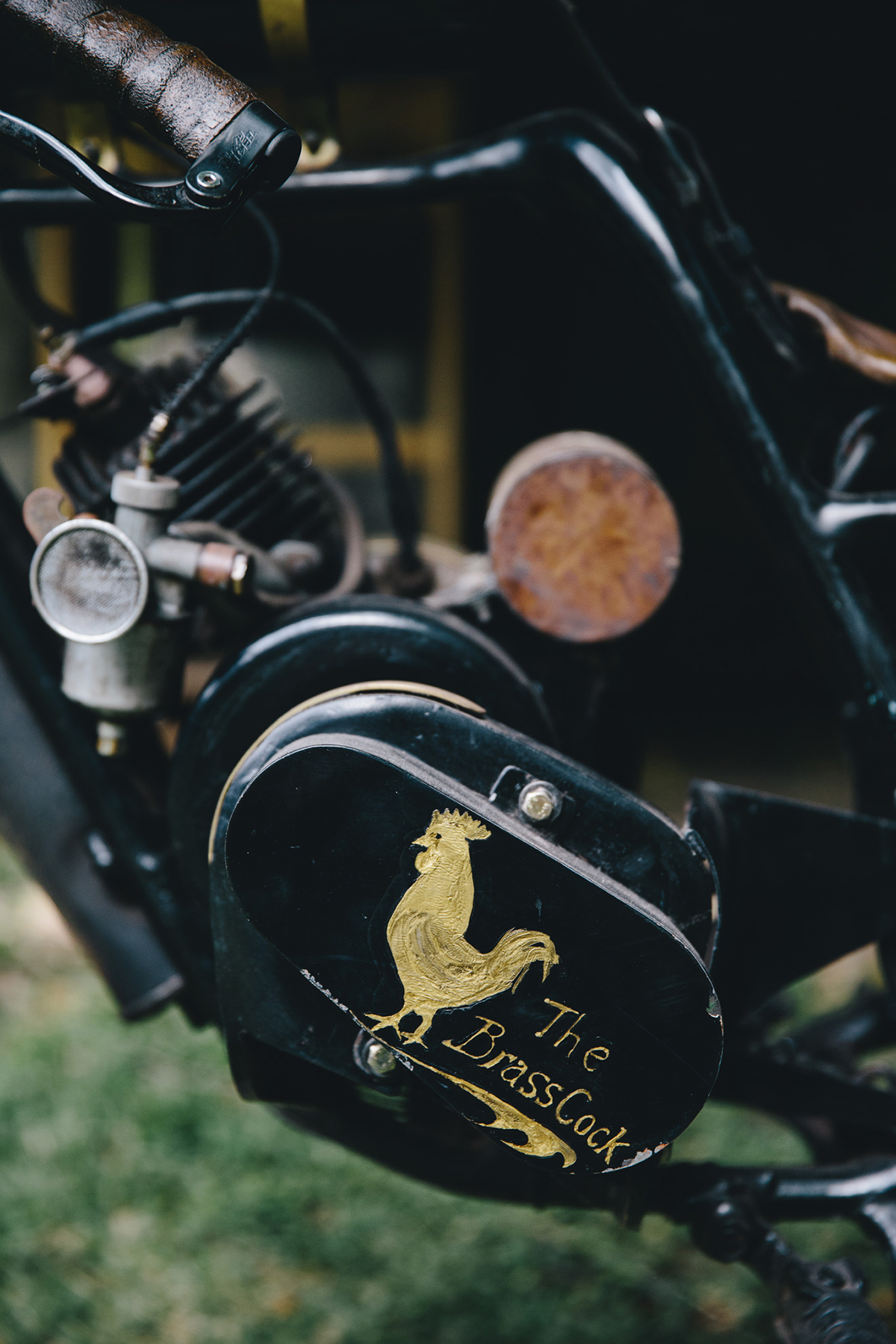 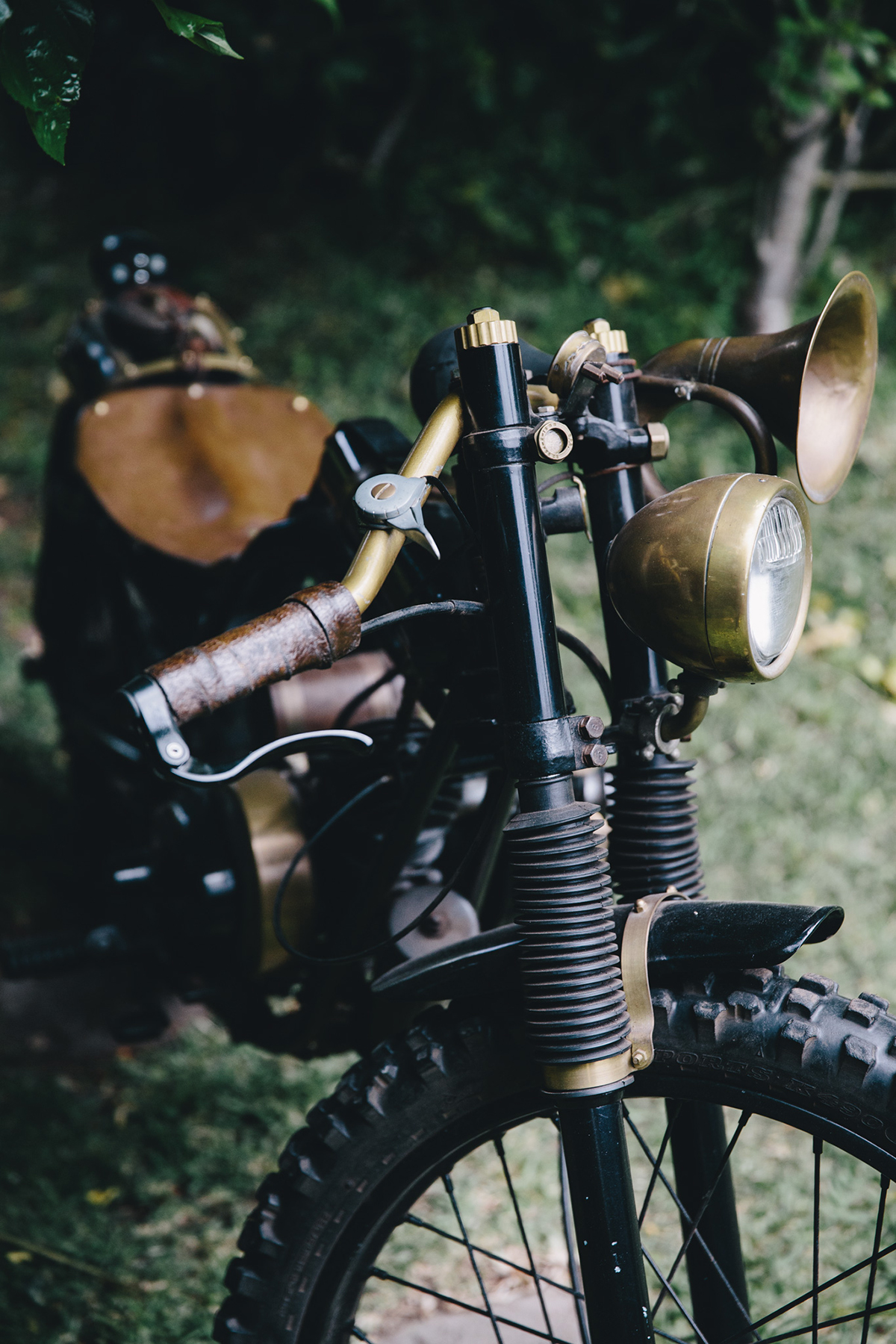 Having just signed their souls over to the devil that is Sydney’s housing market and purchased their first house, Ian and his wife found themselves strapped for any spare cash to buy a lawn mower for their new lawn. Fate would have another plan fortunately. Ian would chance upon an old green and red Ransomes Lawn Mower logo peering out of a pile of cobwebs and old grass cuttings as he walked to the beach one day. ““I can fix that up for the garden” I said to my wife – “Not with me you won’t – you’ll have to go back and pick it up on your own in the dark”, was the reply! I wasn’t sure if the machine was complete – let alone whether it would work at all. I picked it up that night and set to work on what turned out to be a 1930’s crank handled starting Villiers powered 2 stroke Ransomes 12” MINOR lawnmower.” 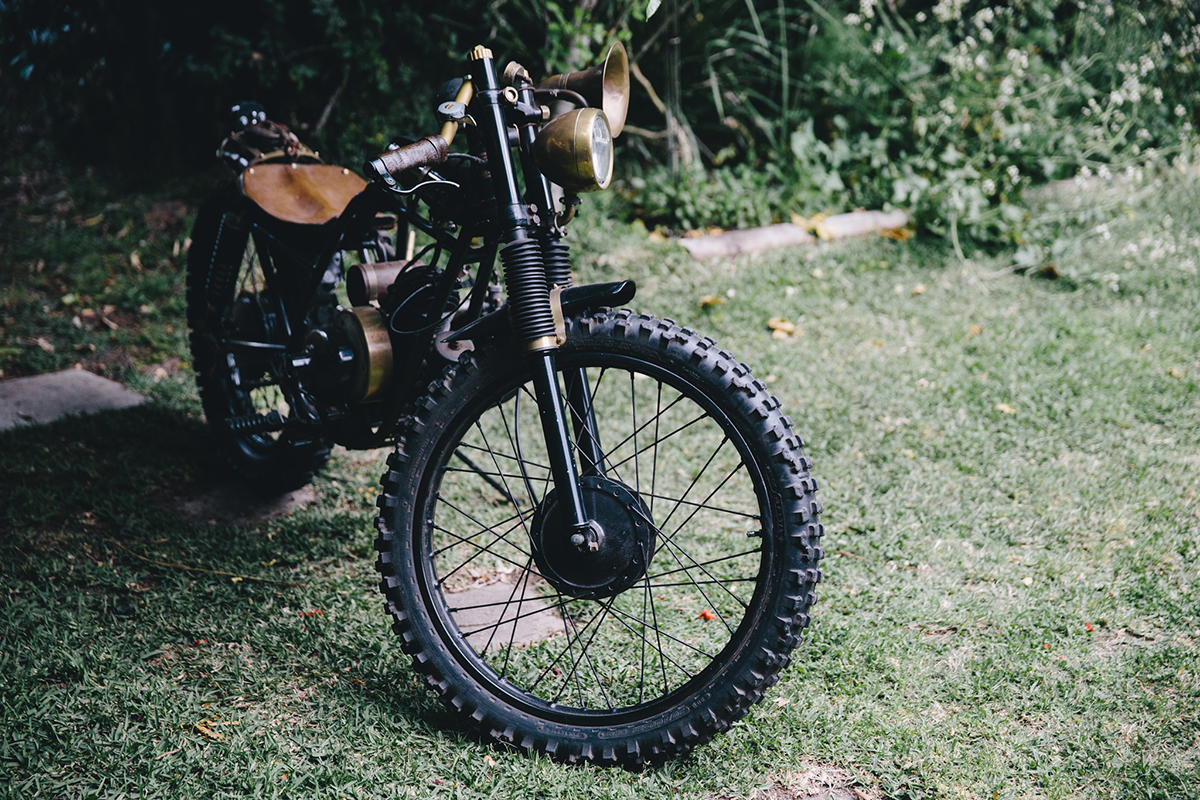 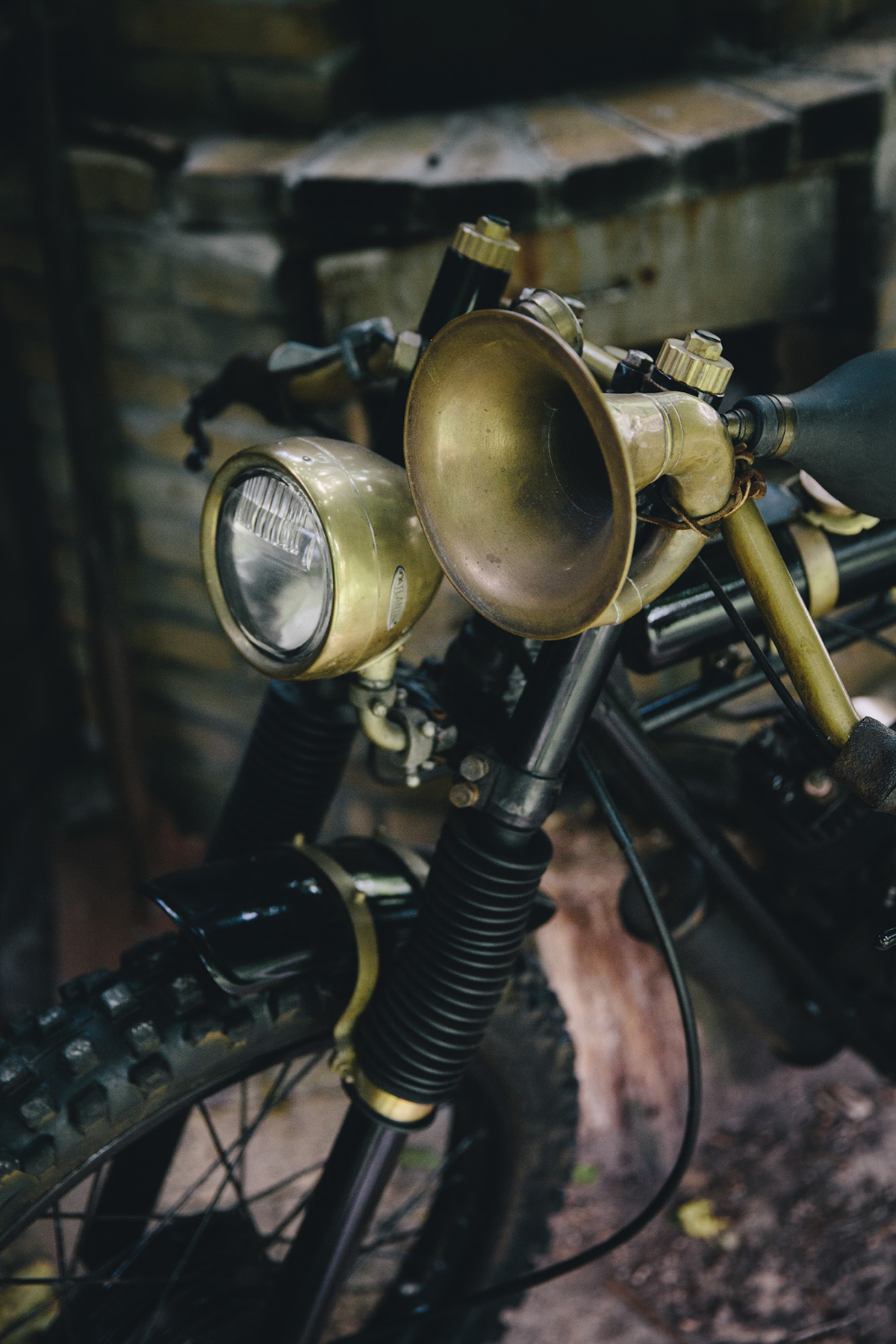 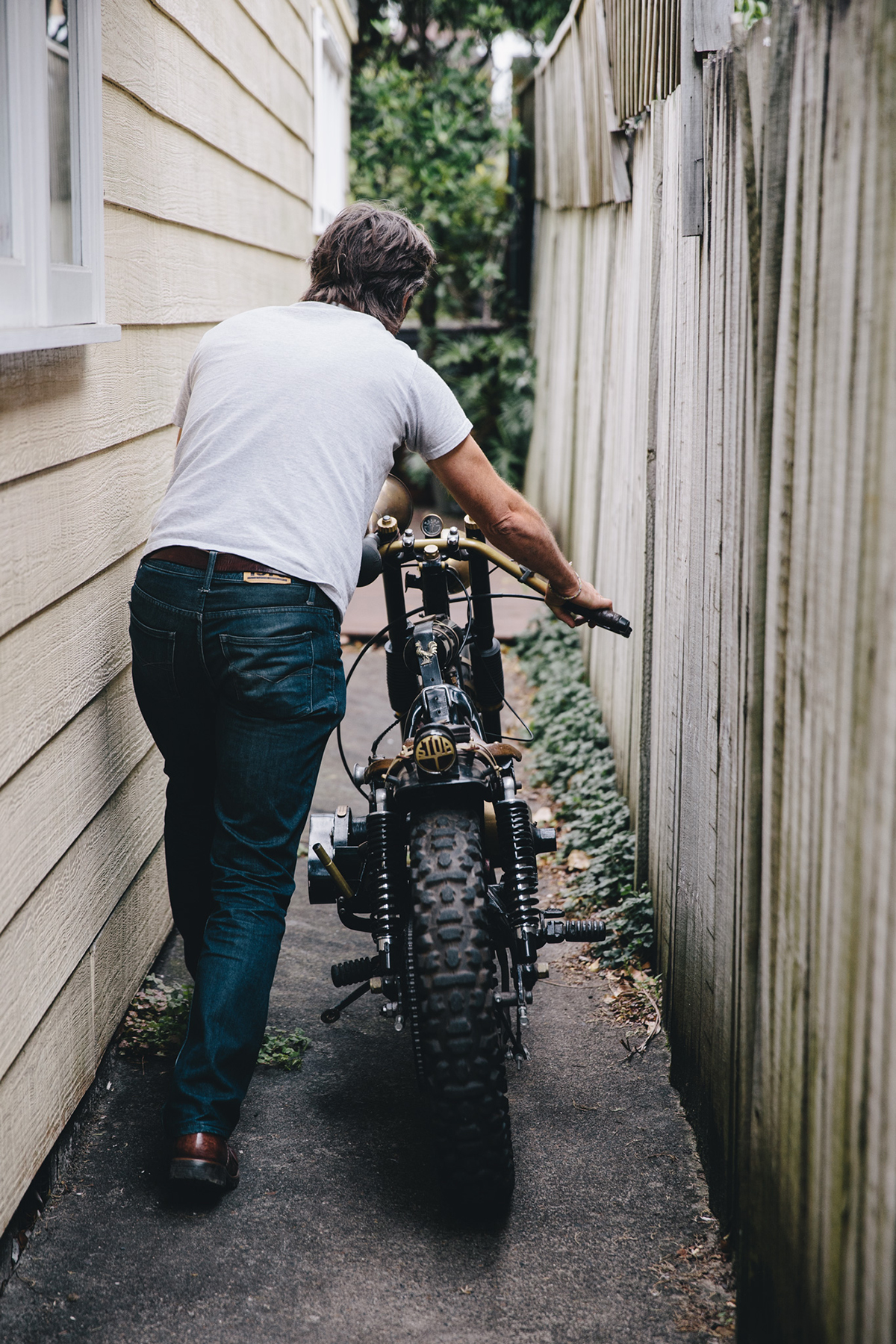 That very next morning, the night’s toils bore fruit. The 80-year-old little engine sprang to life amidst a chorus of coughing and spluttering, followed suit by decades worth of smoke and smog. The following two years the resurrected machine would be well looked after by it’s proud and resourceful owner, however it’s grass cutting days would soon be numbered. “Having been designed for English grass, the Buffalo grass that made up our lawn was proving too much, so she was put out to pasture. Too good to throw away, a new machine was bought to take up the mundane task.

A few years later while chatting over a cuppa to the owner of the corner servo I noticed an old dirt bike frame on his rubbish pile. “You can have that if you want, it’s just going to scrap otherwise”. And thus the madness would begin. 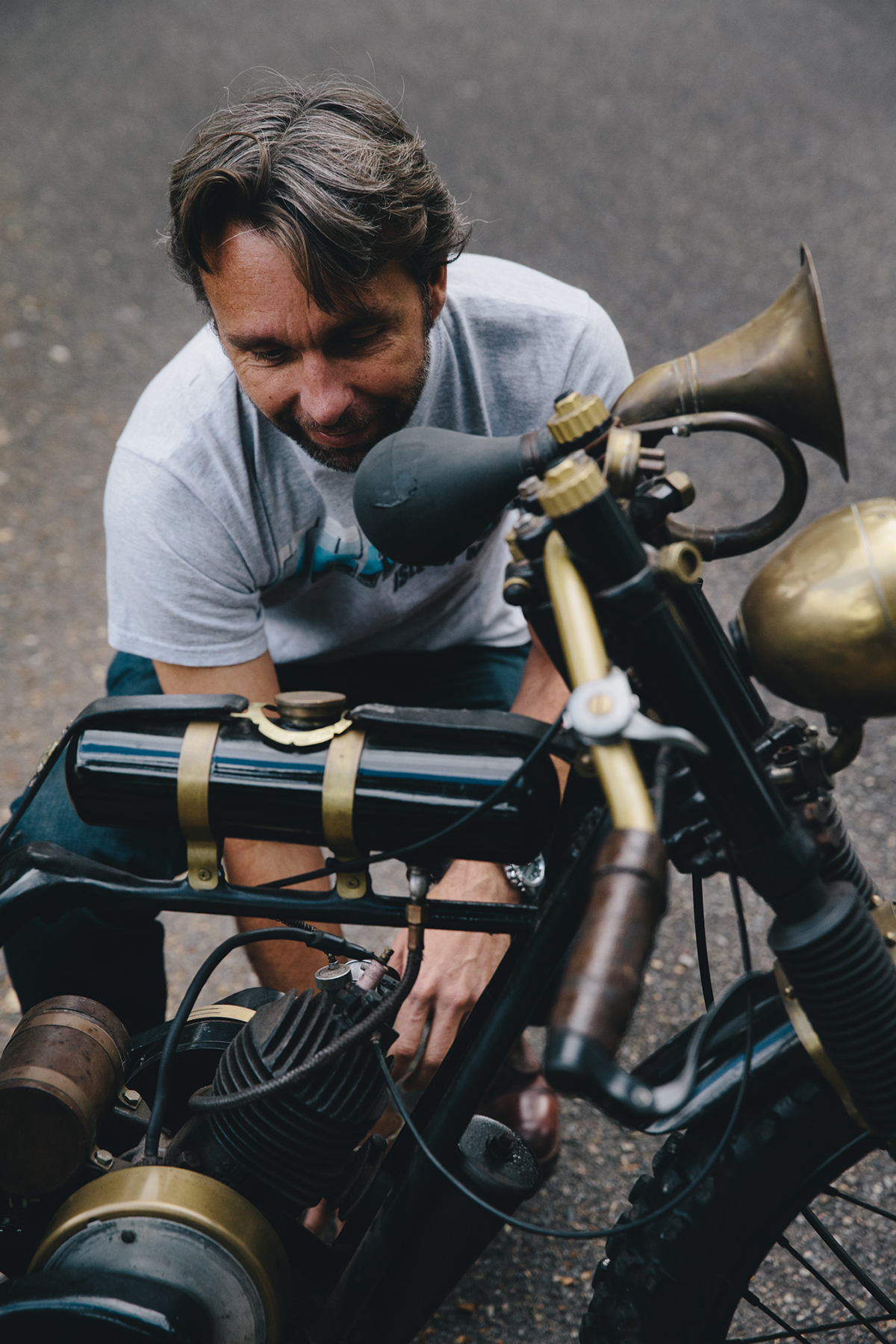 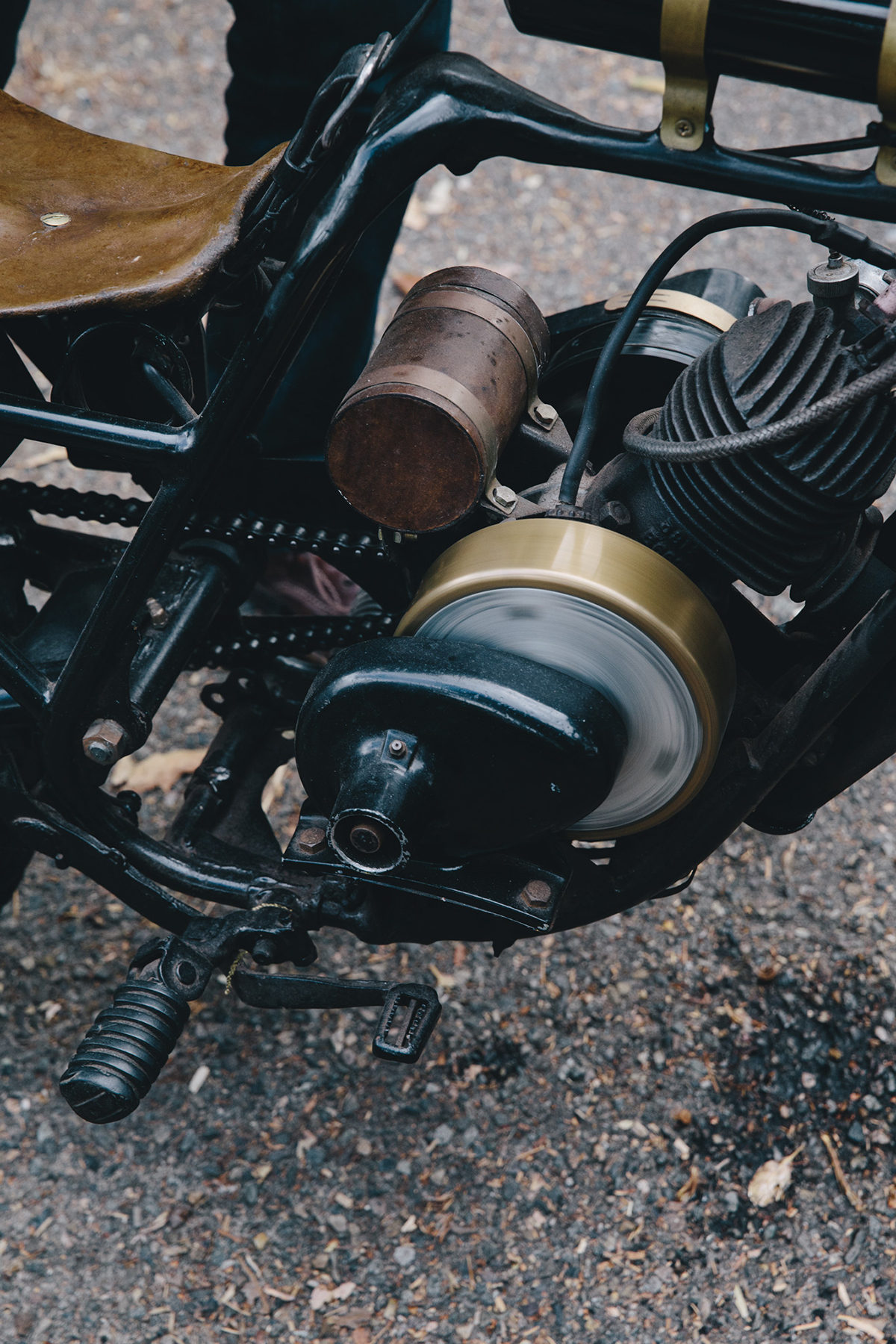 Ian’s nights were now stolen away by this magnificently mad new project; tinkering and whittling away in the shed as he added new skills to his belt. “I was learning how to make steel frames, re-engineering drive chains and stretching / forming brass to create the Brass Cockerel. Visits to the old country rewarded me with a horse harness with a brass Cockerel on it – ideal for the petrol tank strap. I also found a headlamp made in Birmingham in the 1930’s – my hometown. A visit to a farm in Grosevale blessed me with an old Amp meter from a stationary engine – Lucas, where my mum used to work. It was all coming together nicely!” 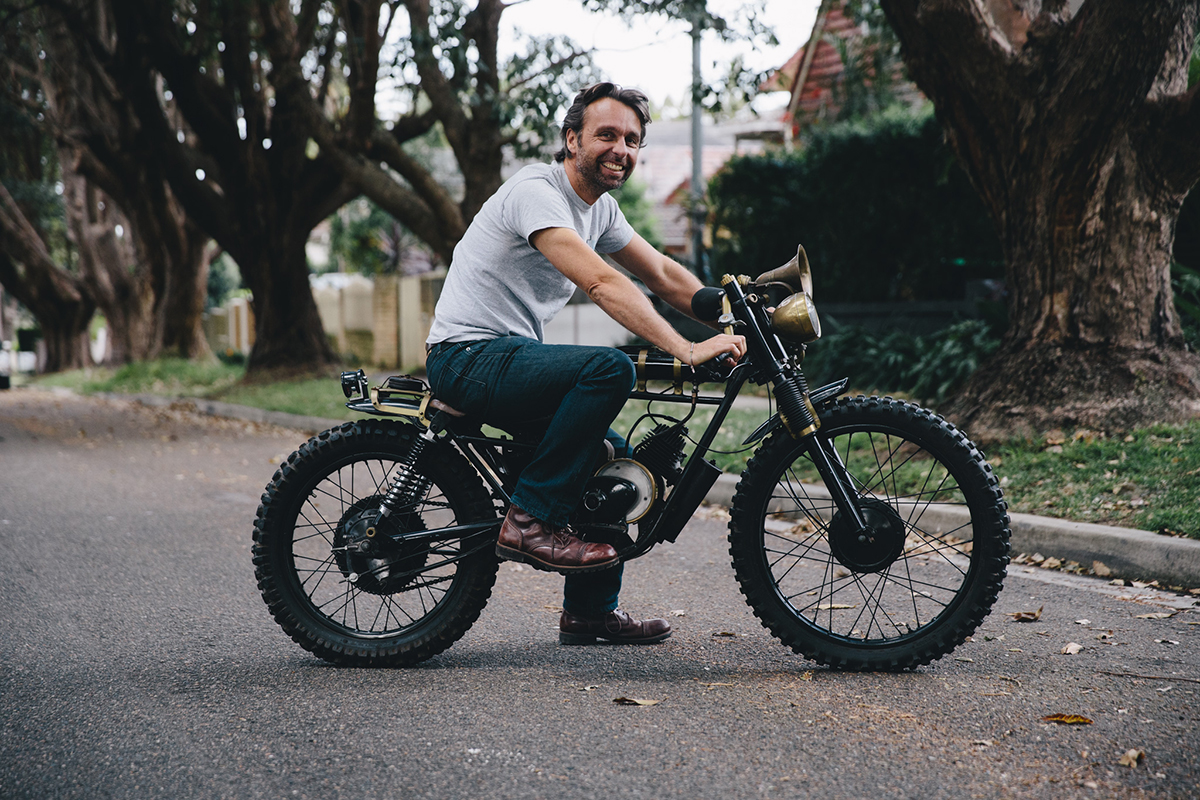 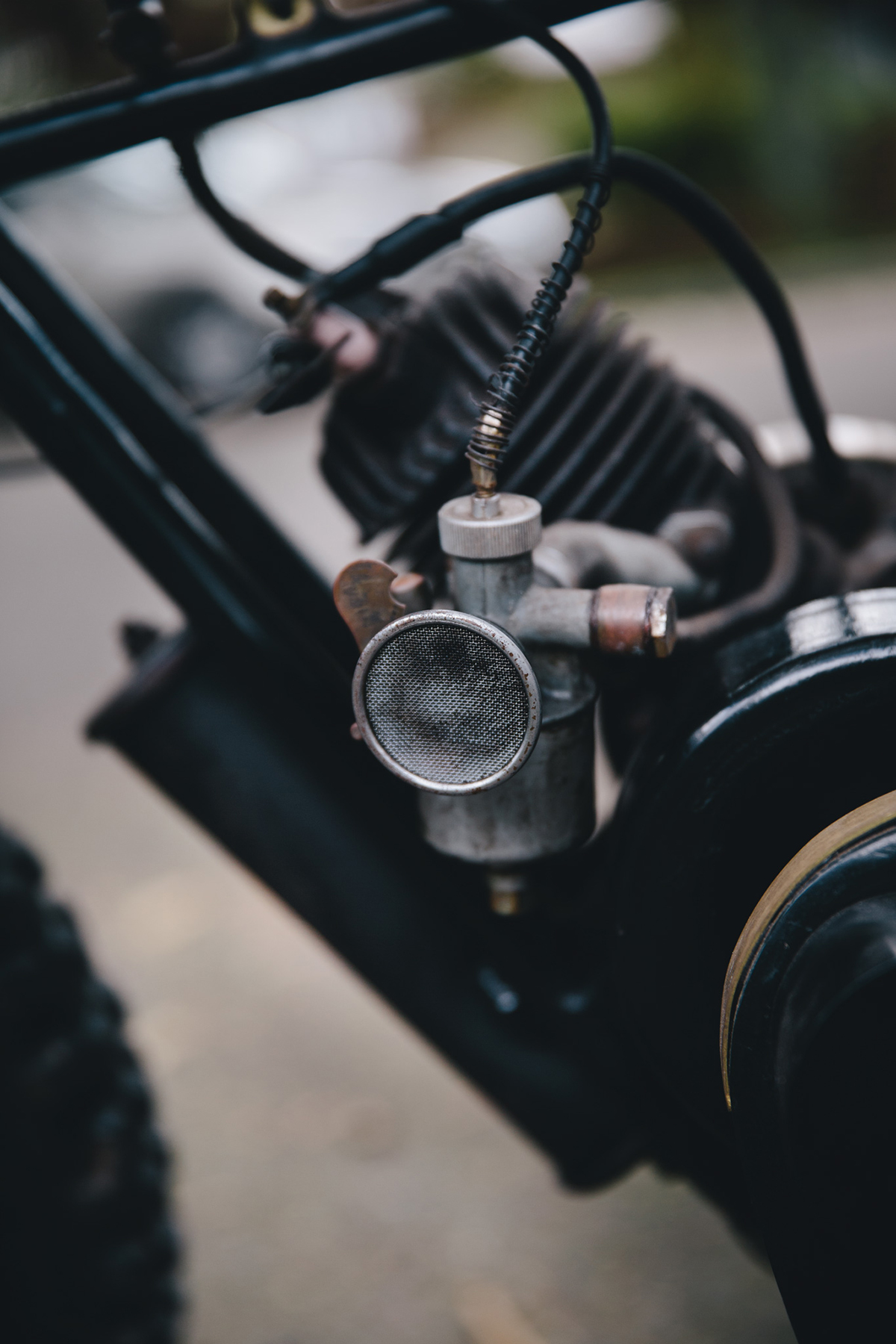 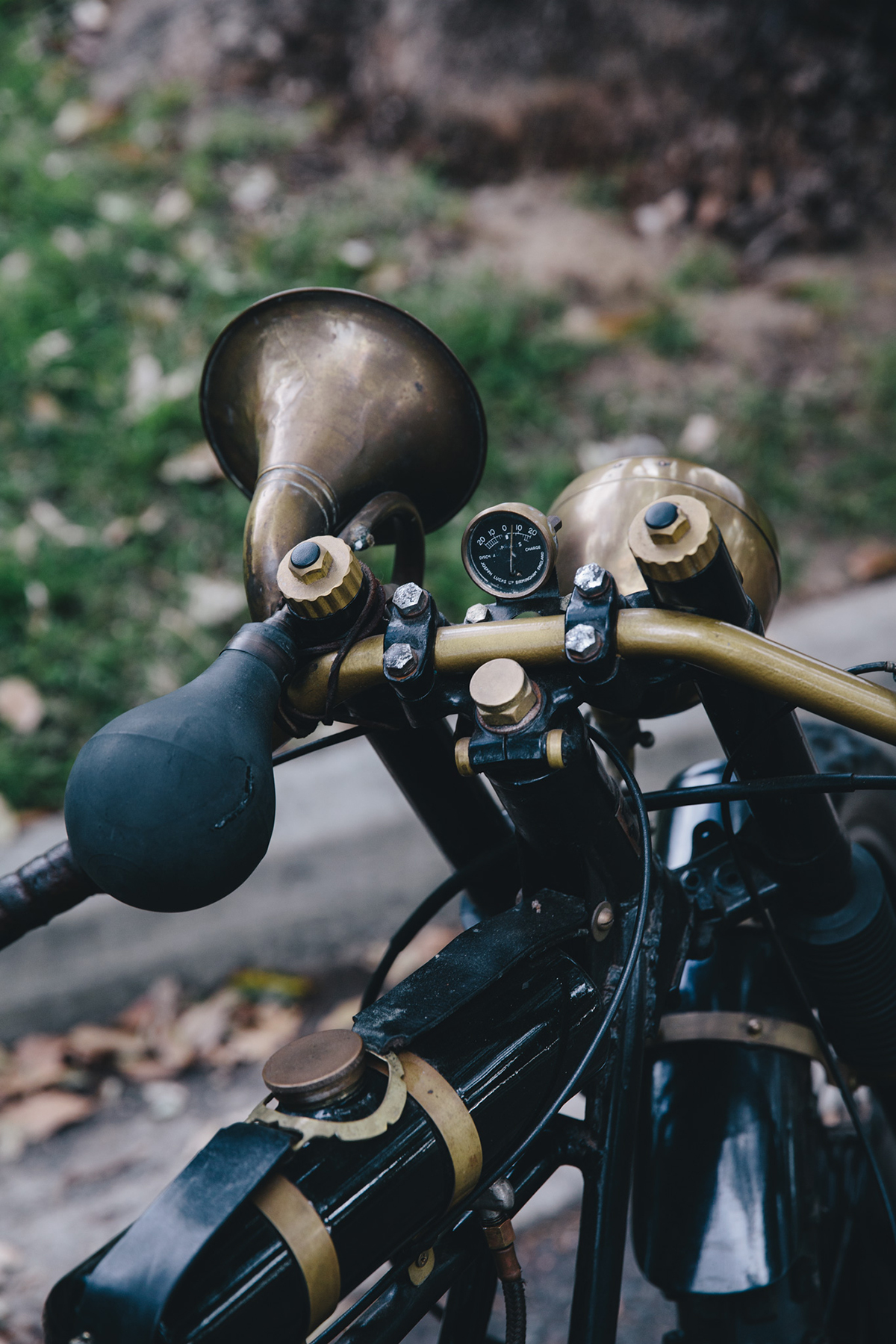 “The name of the project was the Cockerel, as my daughter had been doodling on the back of an envelope whilst I was trying to show her how to draw a chicken.

Brass and black would be the solid colour scheme, like on shire horses, and with a horse brass from an old country already on the machine. With this in mind I started to make the Brass Cockerel a unique looking machine.” 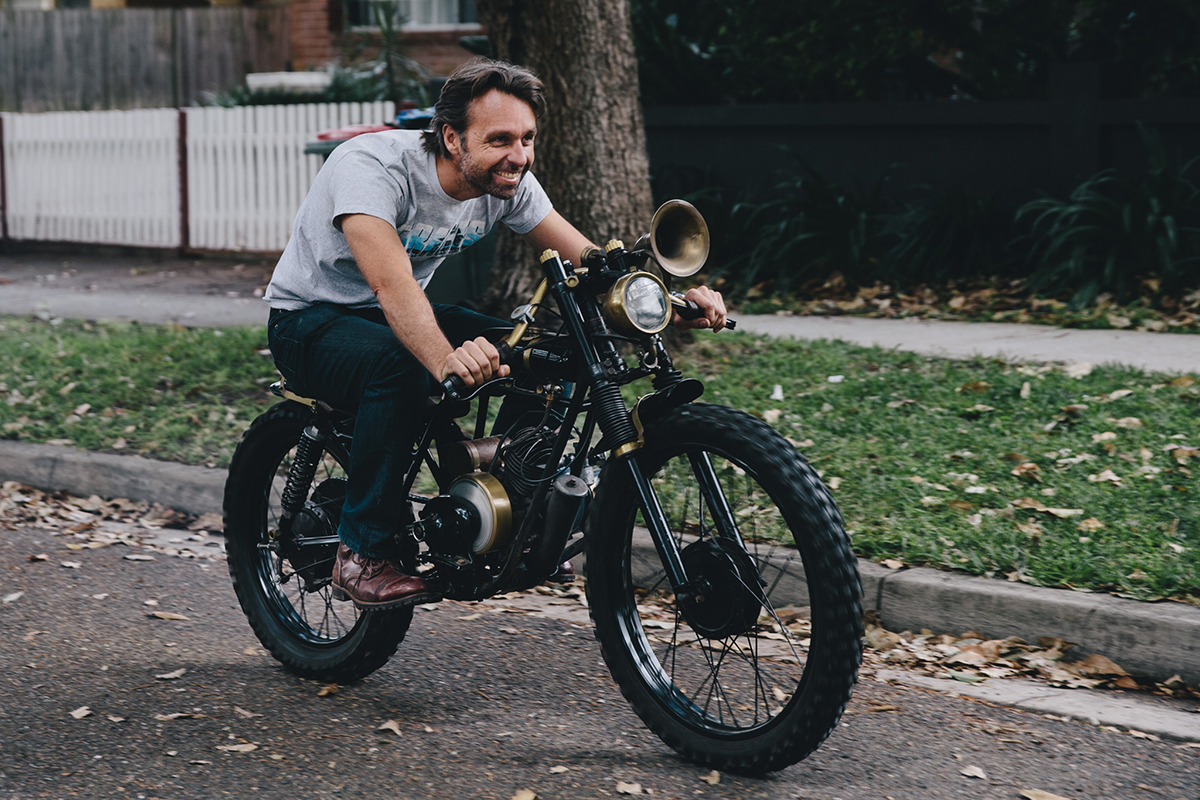 Just about everything on this contraption would be recycled from other parts, with Ian being a strong proponent of countering our often-wasteful lifestyles. The leather handgrips would be recycled off of an old couch, with an old brass horn sourced from Gum Tree adorning the front. “I put the lawn mower 12” MINOR label back on the headset at the front and painted a brass cockerel on the transfer case, and an old tape measure on the back – I wasn’t sure how far she’d actually go!” 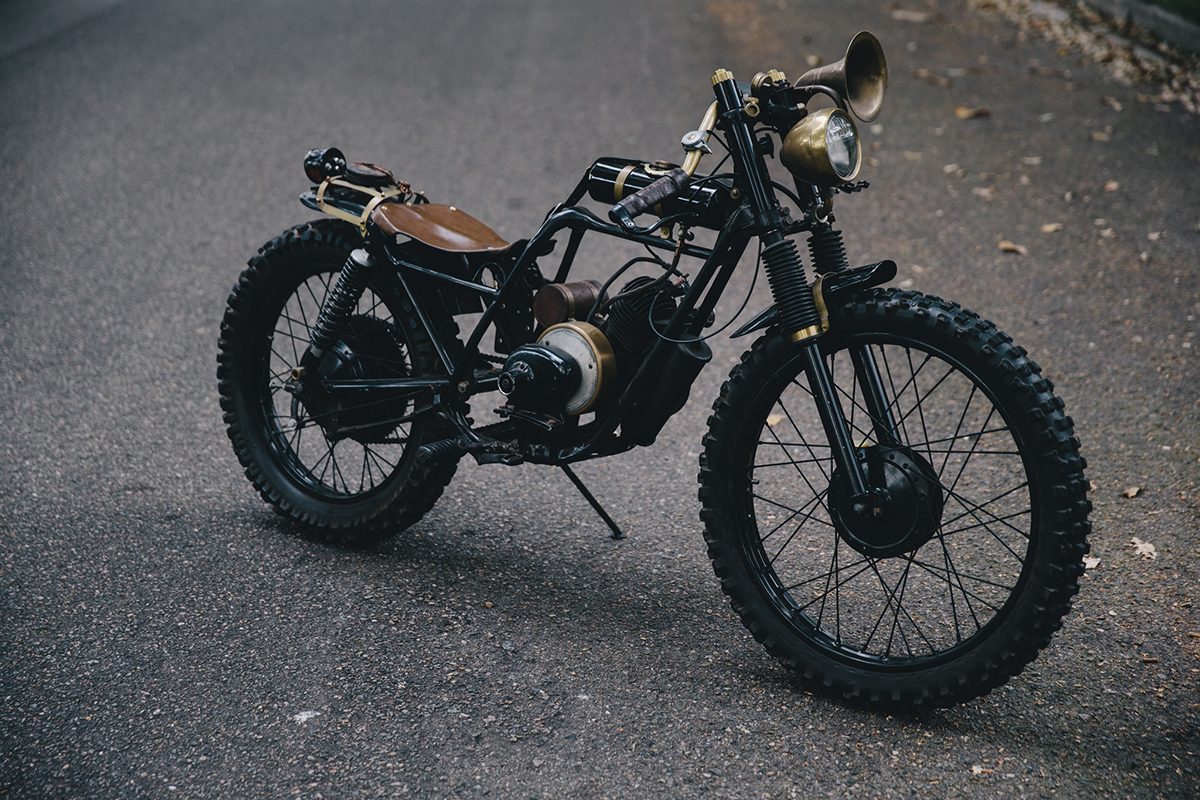 This would be a build that was fuelled by the inspiration of this little old engine that would still be running and serving it’s purpose. “It has a classic aesthetic with its cast head, crank handle starter and great big brass magneto that spins around to create the spark. I could see the potential for an interesting build – I’ve always been interested in an old fella called Fred Dibner who loved his steam engines.

It was a combination of rugged off road and on lawn functionality with the industrial revolution steam engines and canal barges look I was after. I figured I’d never seen a crank start motorbike and just starting it would be a spectacle!

I liked the idea of solid engineering – like you find on old pump stations and traction engines.” 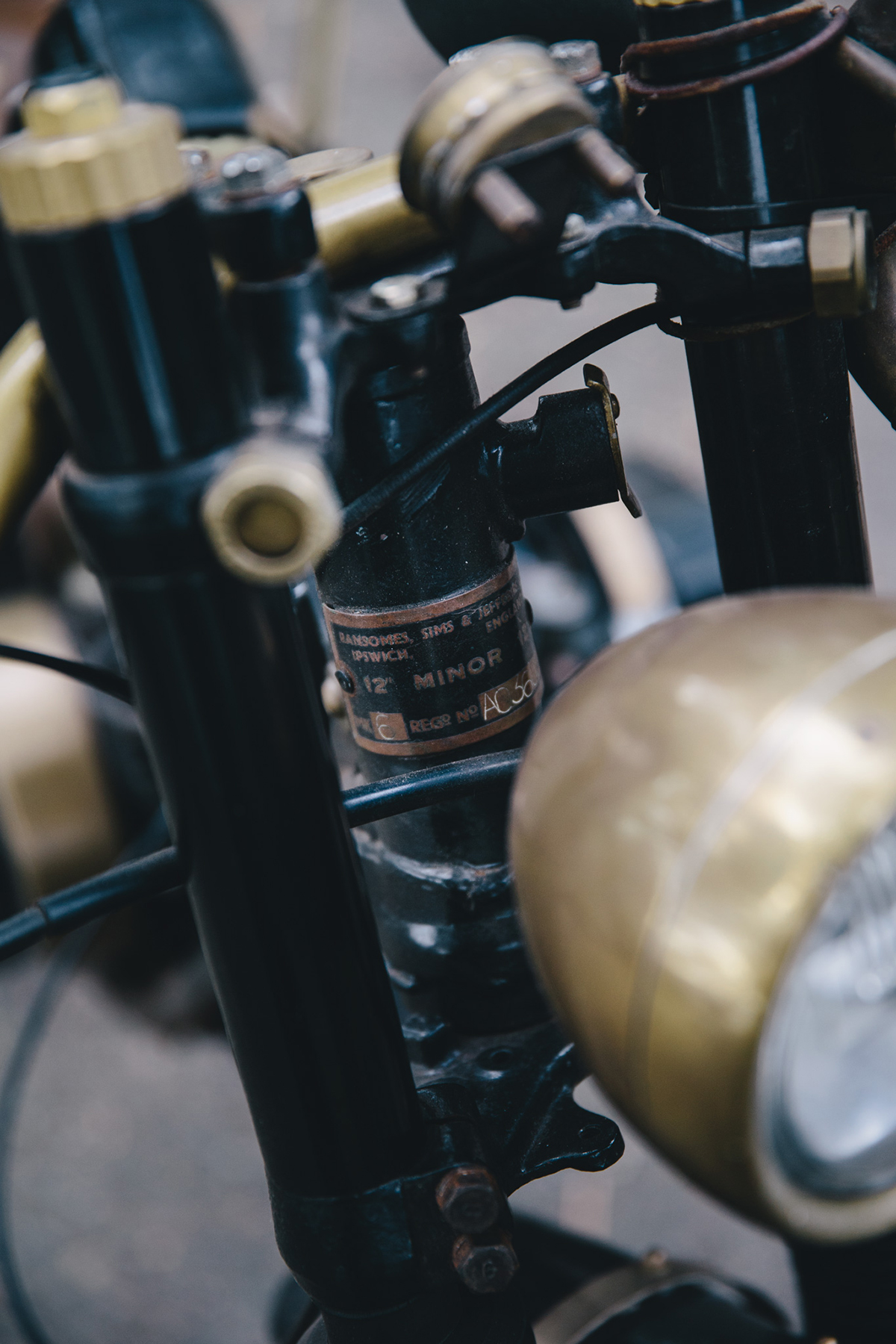 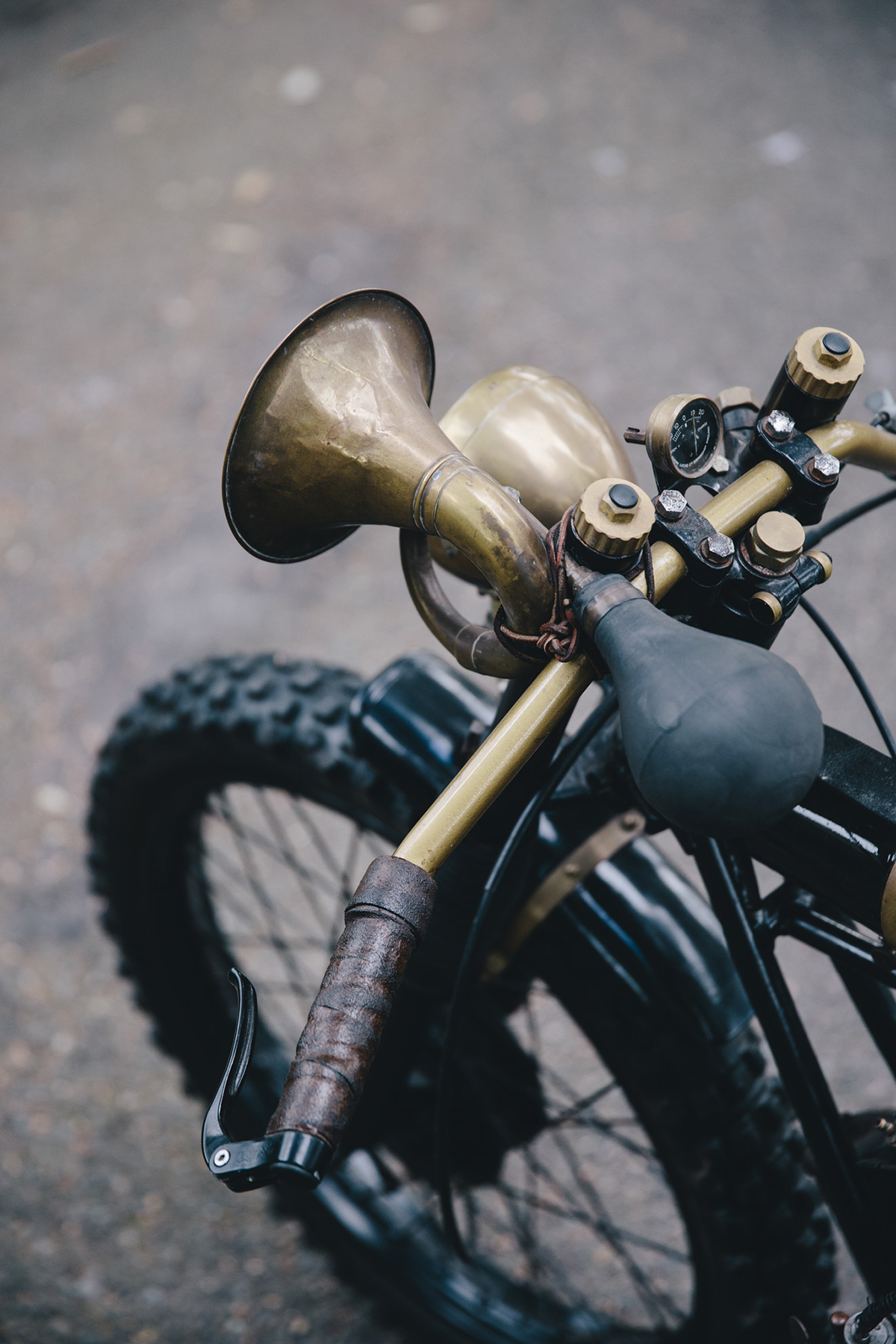 “The first ride I had on this was down the road from my house. I felt like a pioneer on this quiet road – slowly pulling the throttle on with the reverse lever. Down the road I went, got up to about 20kph with the little engine struggling with the high gearing and low power. I decided to turn back up the road, when a friendly voice told me to put a helmet on, its first run in with the local constabulary!

I had to drastically reduce the primary (& only) drive gear to help get into initial motion, which in turn limited my top speed. I needed a flat surface to fine tune this rugged machine, which by now looked more at home on the grass with its knobbly tyres and light weight look.

The top speed ended up being only about 30kph, but the smiles it’s given my mates rated far higher!” 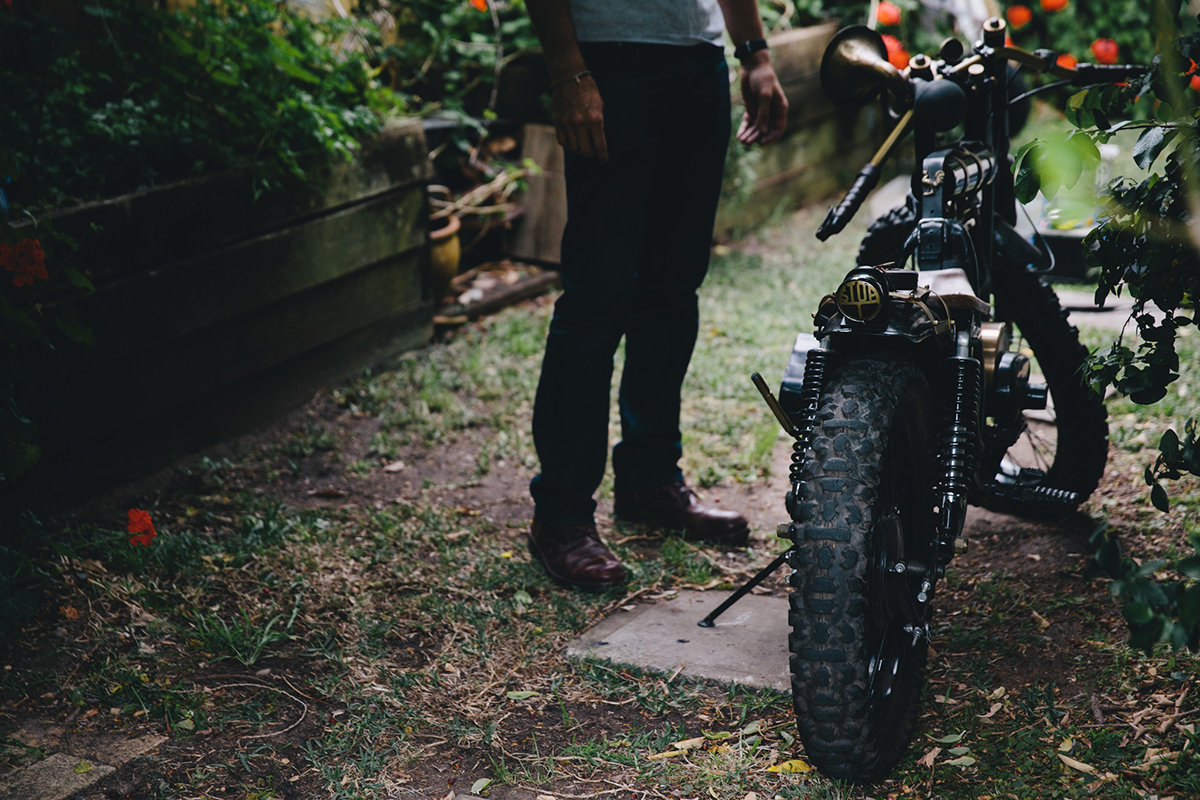 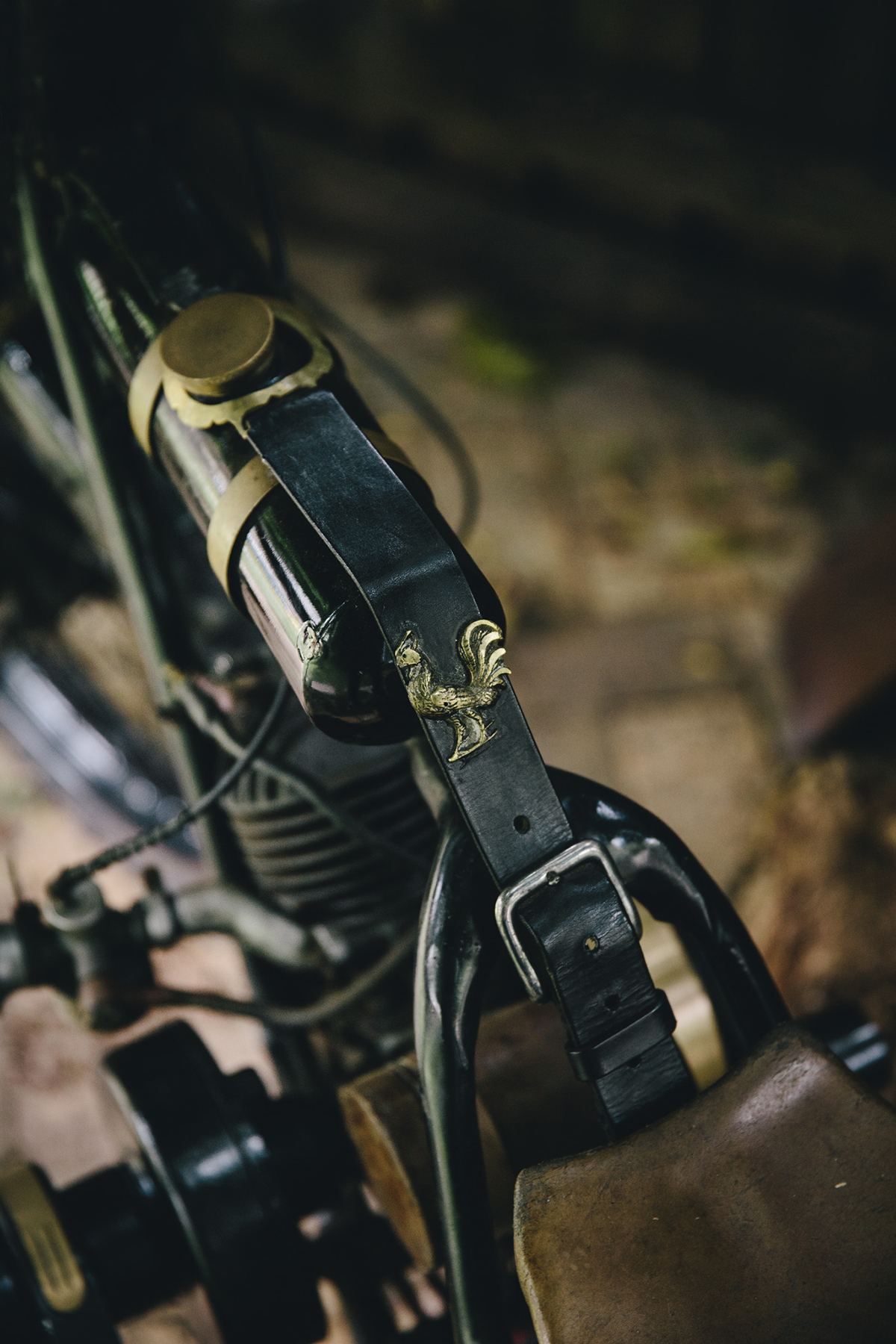 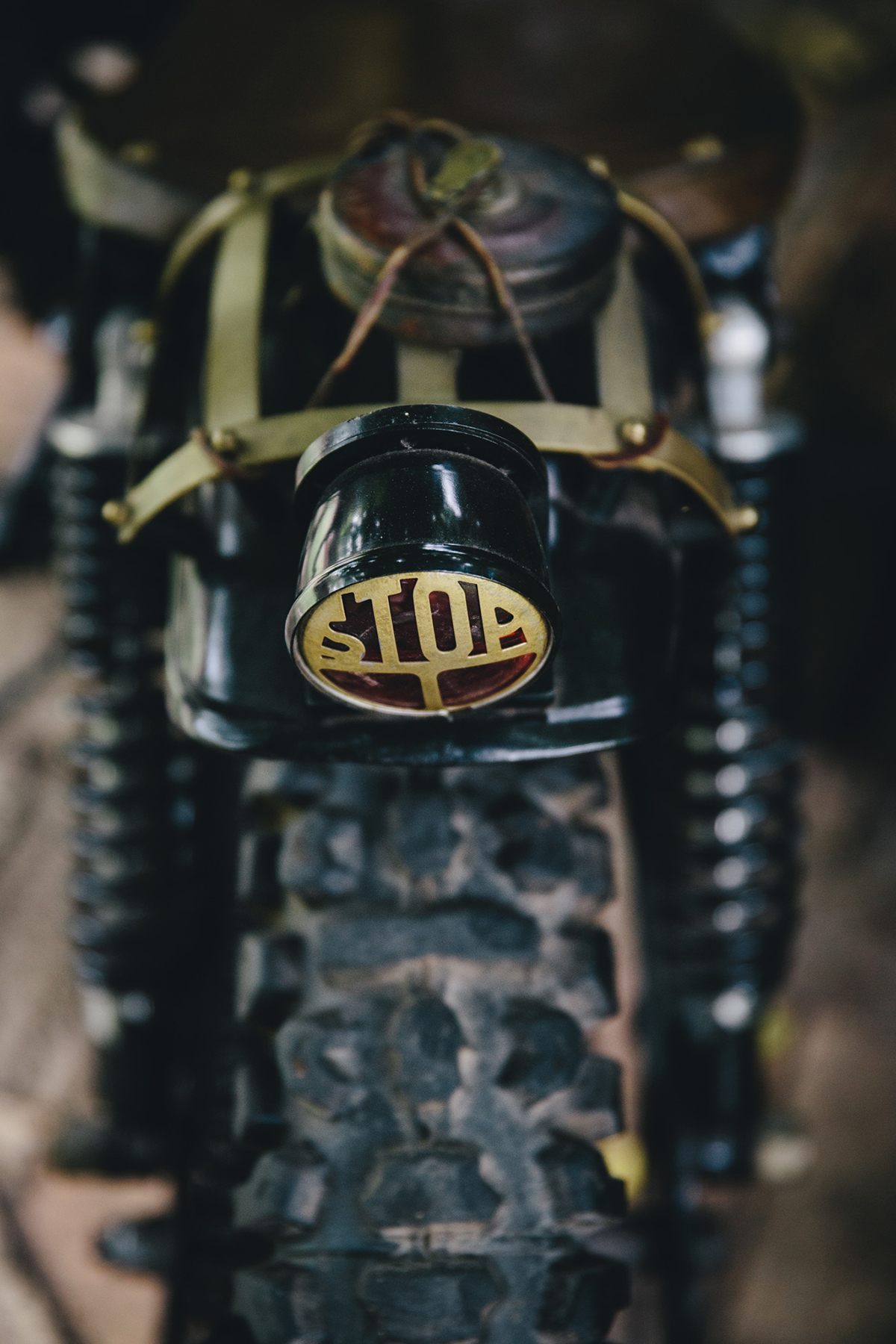 “I mulled over the final use of this machine and settled on “lawn racer” as its function. It’s been ridden by a few mates around the netball courts a few times – even been in trouble with the law. It won a local Surfside Garage trophy for most “unique” motorcycle, when I rode it in along the road!

Its crowning glory however was in this year’s Aftershock, where it completed a few circuits – but didn’t get into the grass track circuit. I broke the old grass cutter which is now the drive shaft going over a grass ditch which was bigger than I thought!” 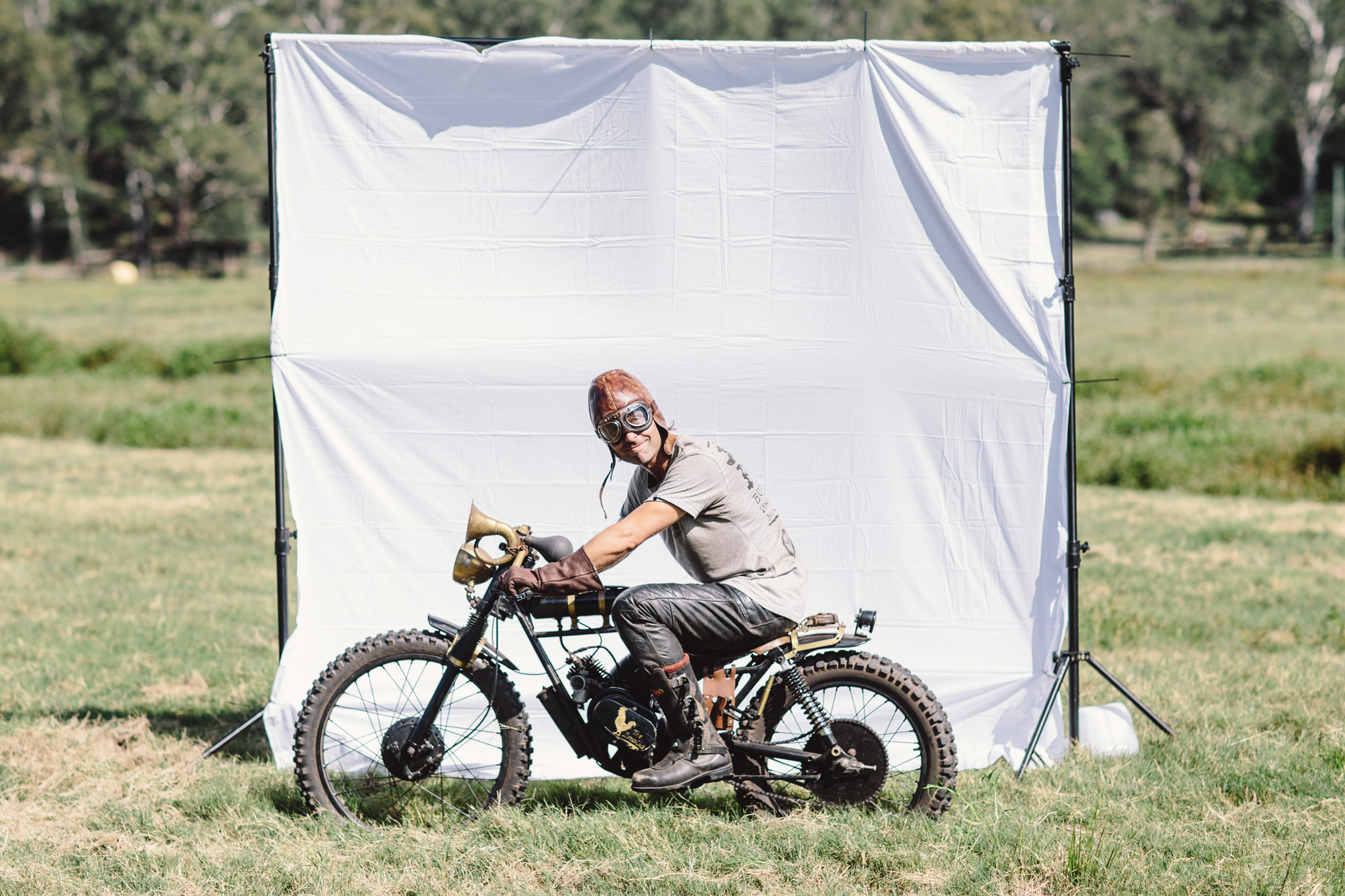 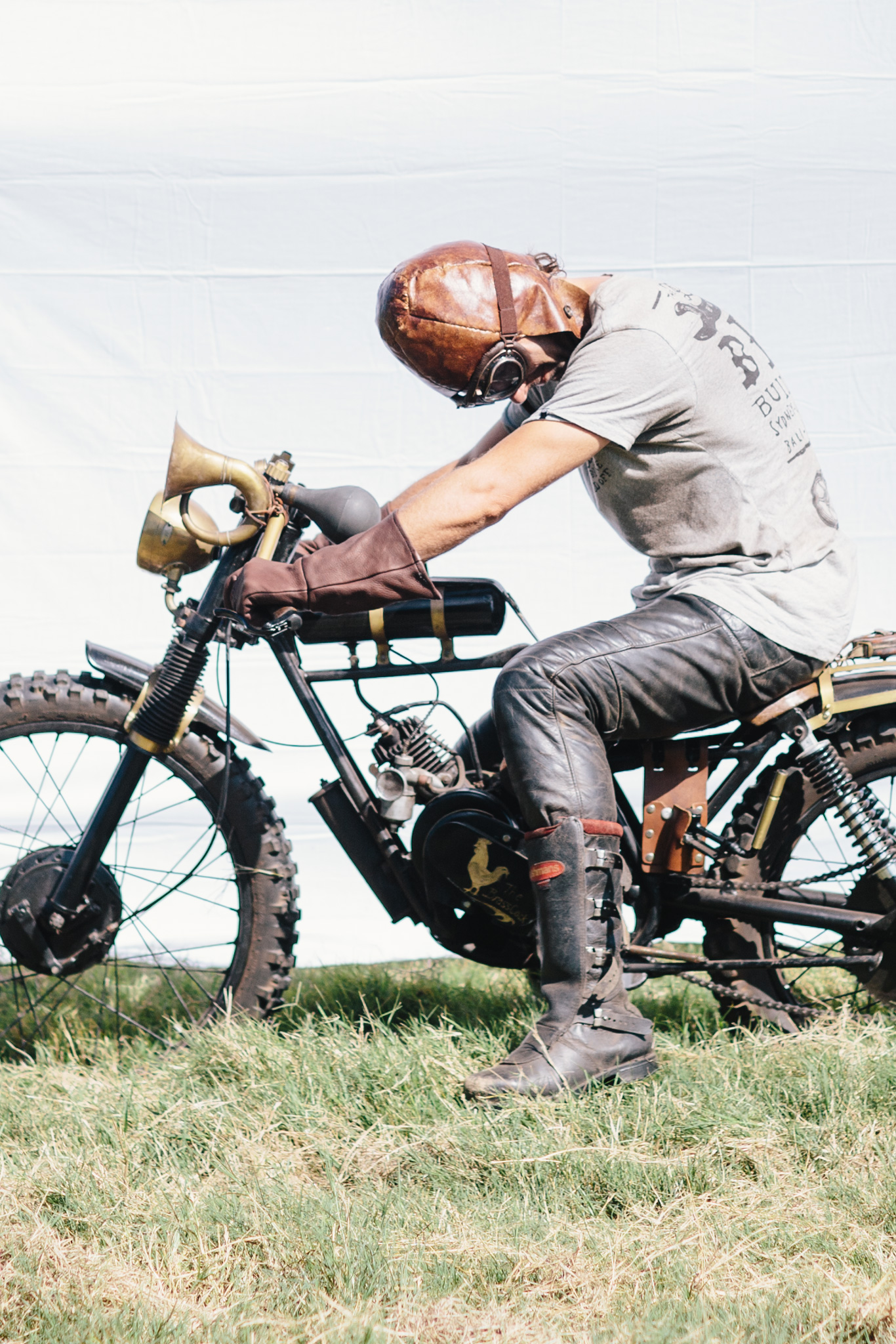 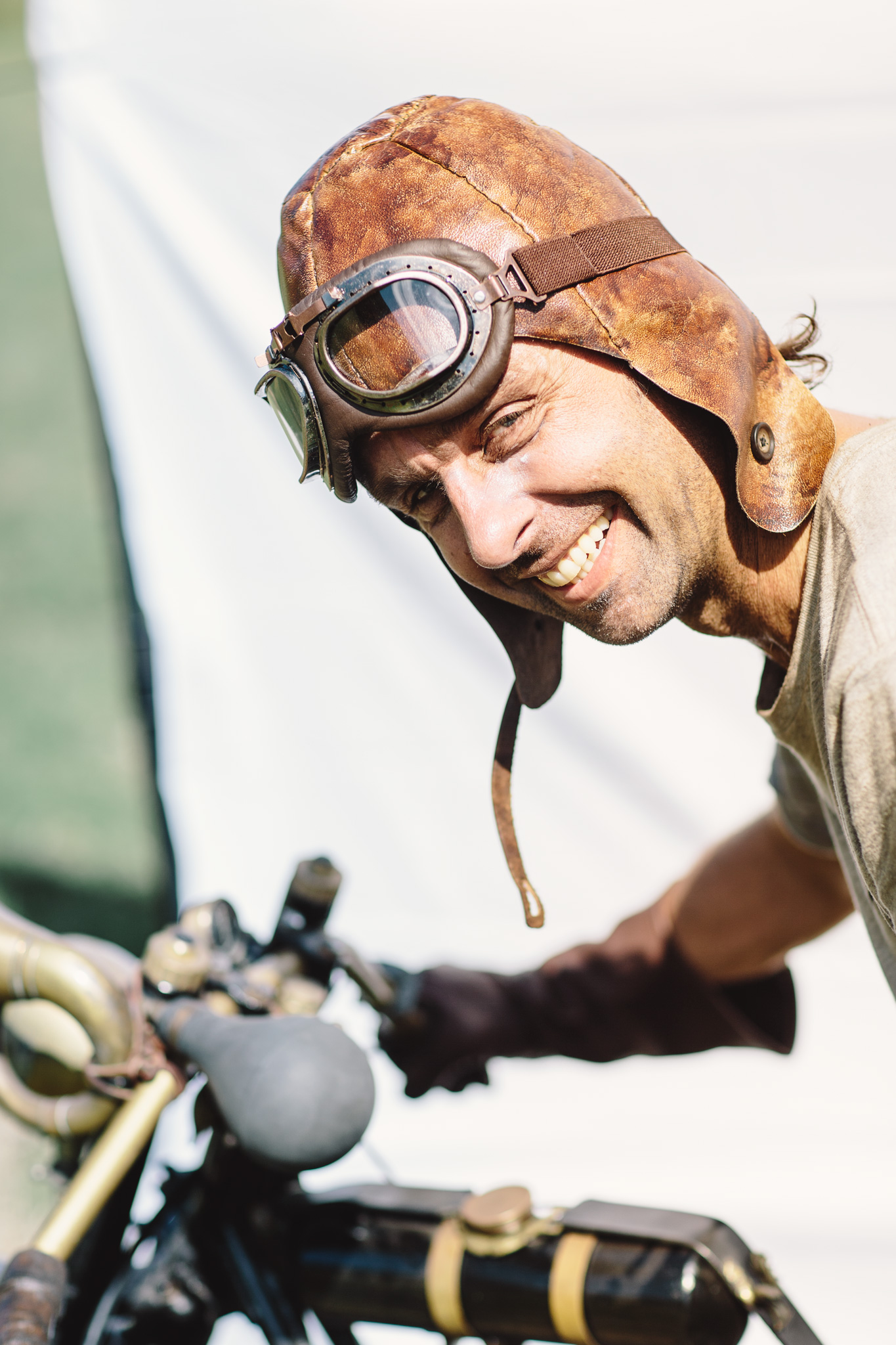 “The trickiest parts on this build was making the engines centrifugal clutch more aggressive and moving the cutting blade final drive shaft and chain gears. The “clutch” was slipping trying to move both a motorbike and a rider off the mark, so I took it apart and made a wavy pattern in the bell hosing and on the centrifugal ‘brake’ pads – this gave me a more positive action and the more aggressive initial torque I needed.
The final drive is redirected with reduction gears linked with small chains. The bearings and cogs are all off the original lawn mower – a Ransoms 12″MINOR

I cut off the red cutting blades to use the centre shaft and bearings and moved all the gearing to put the shaft at the back with an extra reduction gear. The final shaft has a split to allow the chain and sprocket to be fitted, where the keen observer can spot the original red paint!

Next contraption may be either a faired homage to the 1940’s jets or a home made steam engine powered sled… but that’s just a pipe dream for now.” 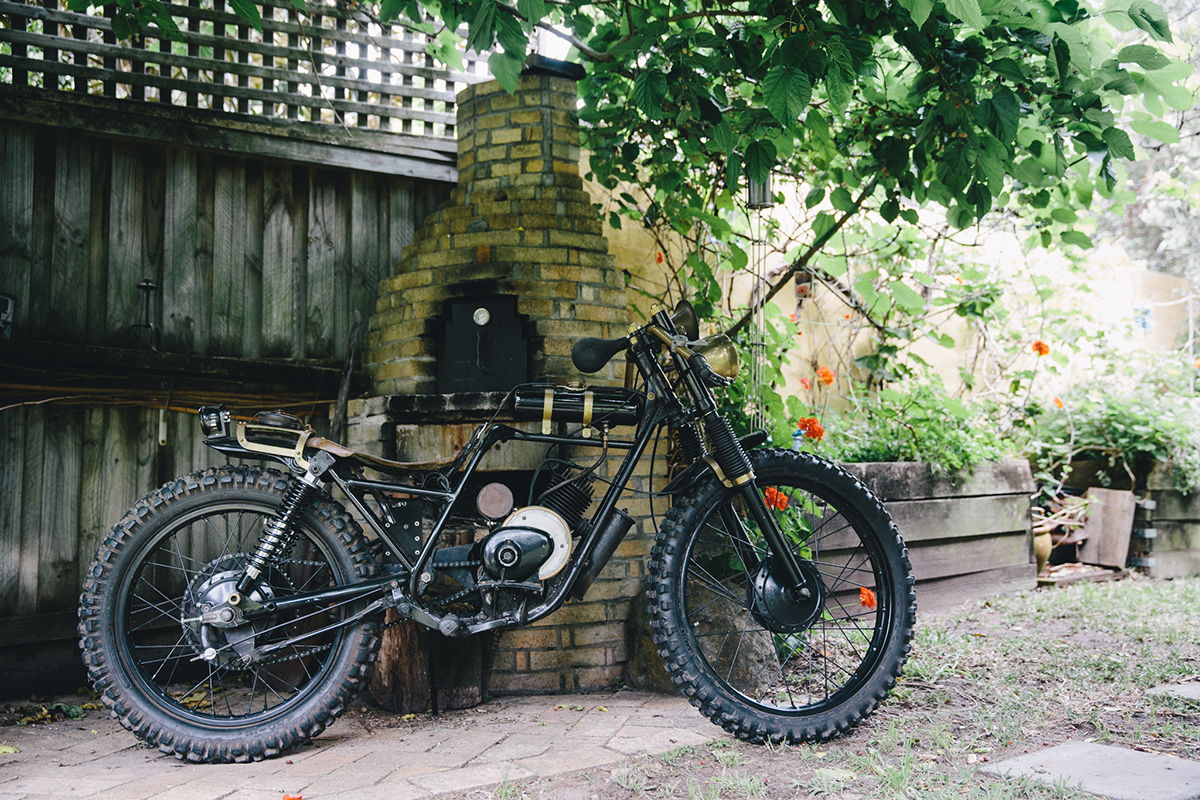