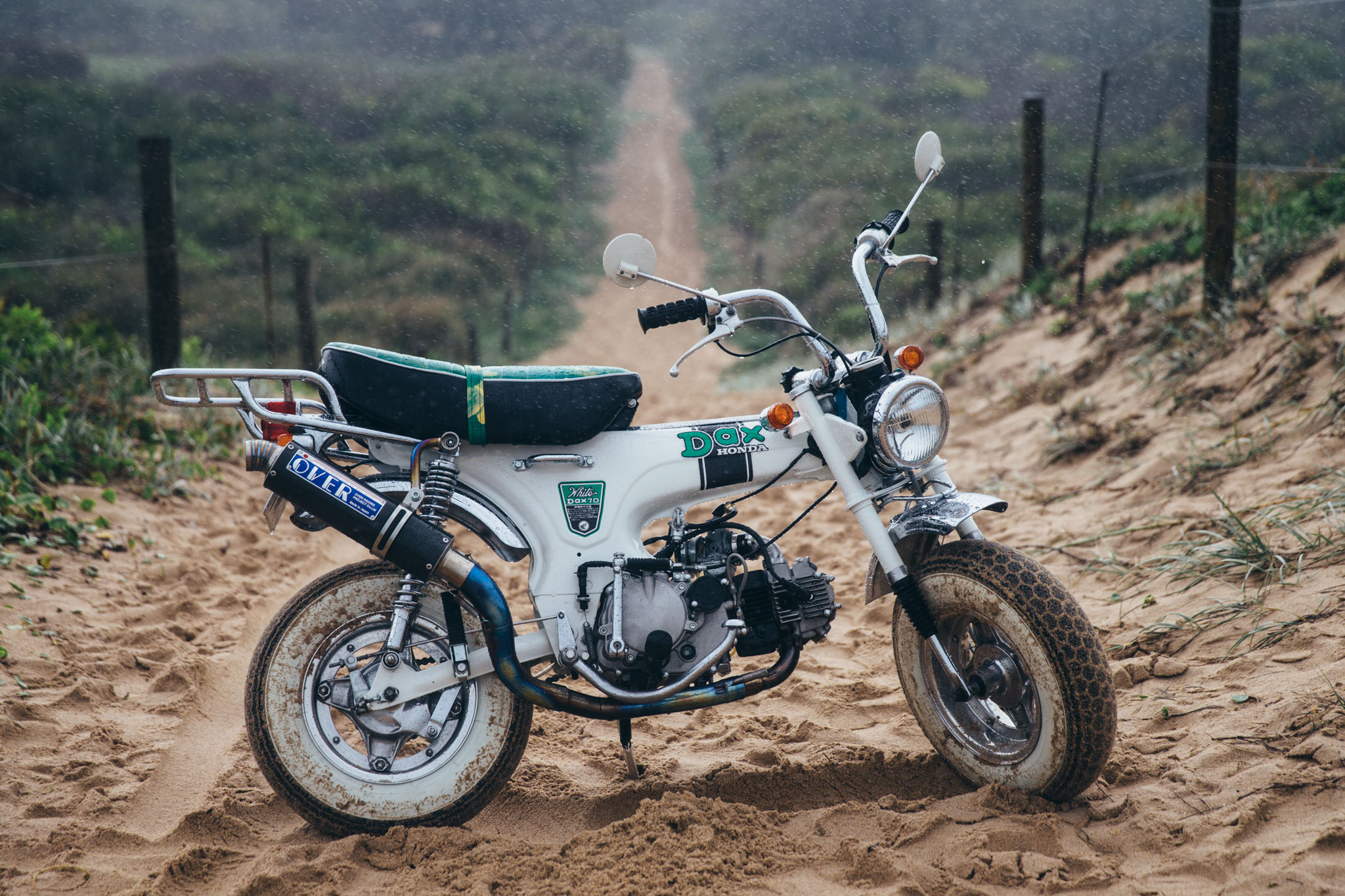 Looking at this machine, you’ll soon have thoughts of a beaches ‘70’s vibe. Mungo Jerry’s ‘”In The Summertime” might be playing in your head, with images of big hair (everywhere) and good vibes from this super retro Honda Dax. Of course when were decided to check it out, the weather was the exact opposite. 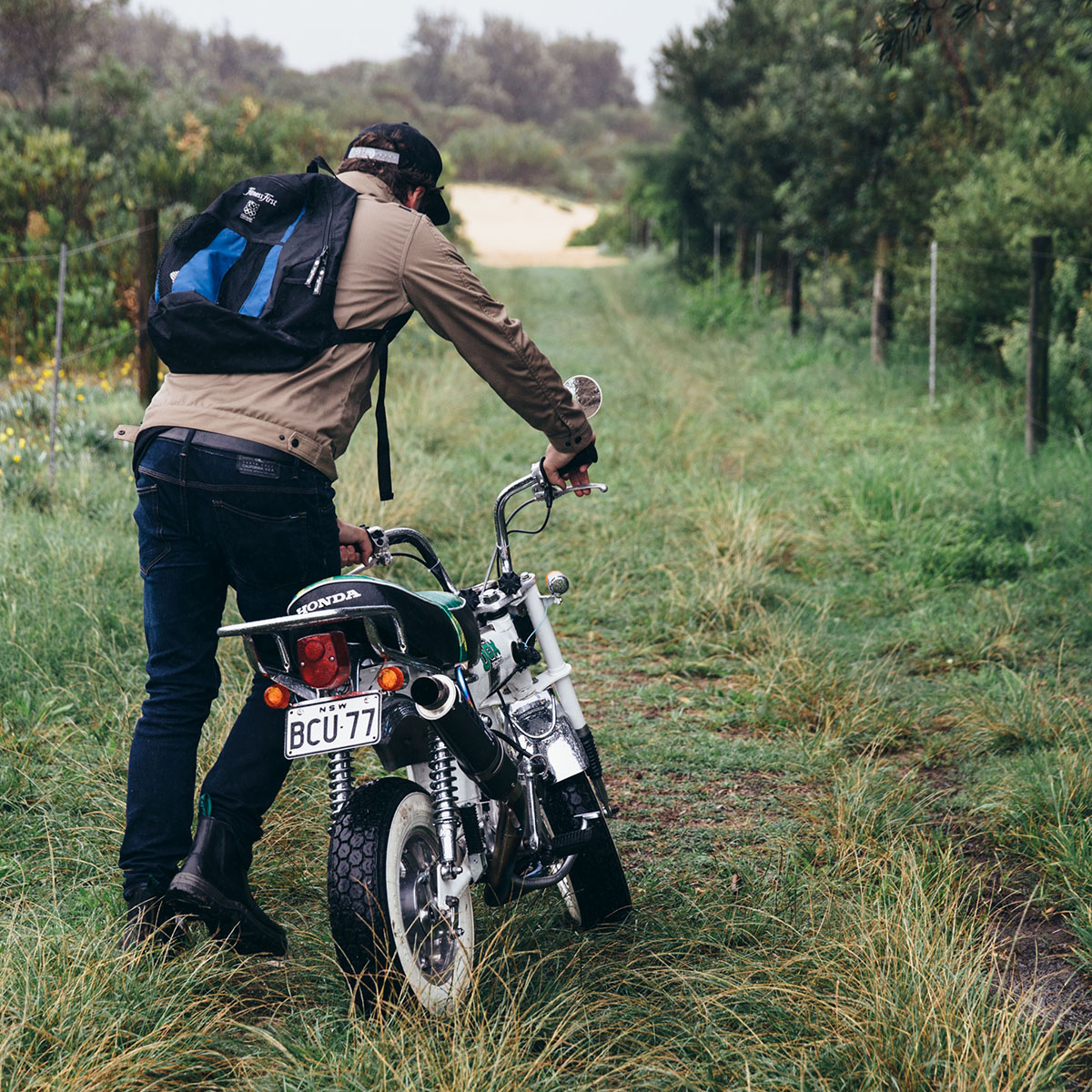 Ben is no stranger to small bikes, with his first ever being a trusty old Honda Z50 – affectionately known as the monkey bike by many. The intention for these mini-wheels was simple; go on adventures, and to grab the attention of the fairer sex. ‘Our logic was horribly flawed as it turns out. Girls weren’t attracted to 13-year-old boys riding mini bikes. The 17 year olds in Commodores seemed to have more appeal than us. So we were left to setting out early mornings to go adventuring through the National Park. We had kept the original mufflers on the bikes to avoid unwanted attention, but when we did come face-to-face with a park ranger we would pull every inch of charm we could to avoid getting a fine. 49cc of single cylinder Honda never really inspired the confidence needed for a Smoky and the Bandit chase.’ 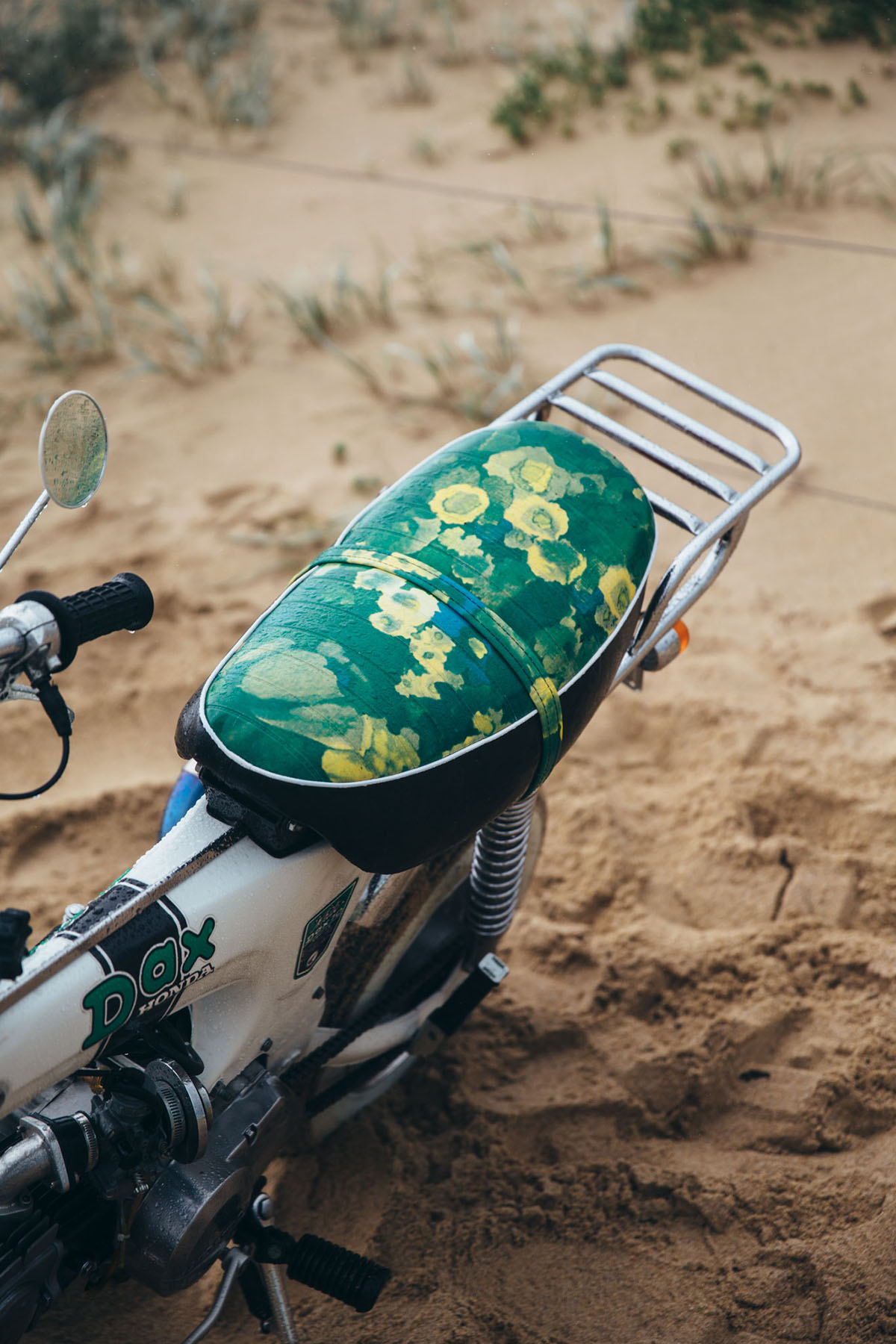 And now many years later, this same misfit would be dragging another tiny Japanese motorcycle to spots that would make a park ranger frown. This Honda Dax ST70 is registered as a ’73 model, however Ben will be first to admit that the actual year is debatable for this machine. The catalyst for the nostalgic resurgence would be time spent in the good ol’ US of A. 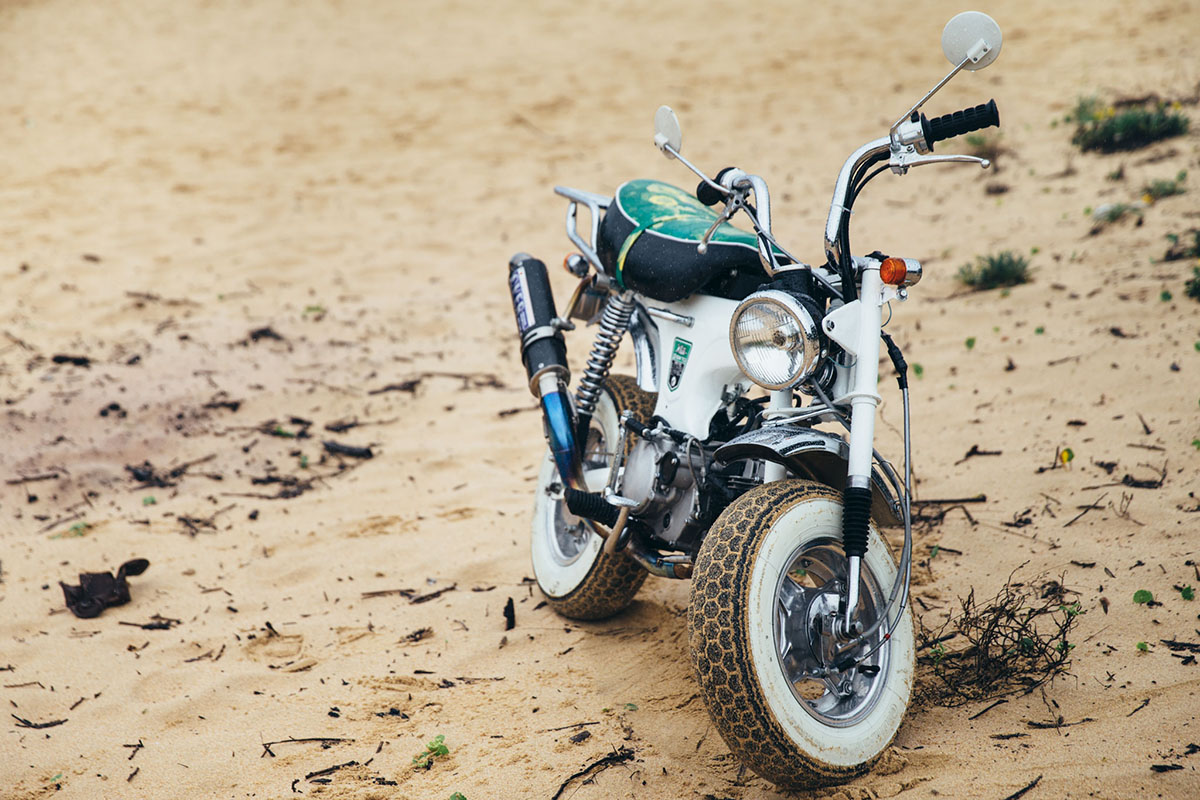 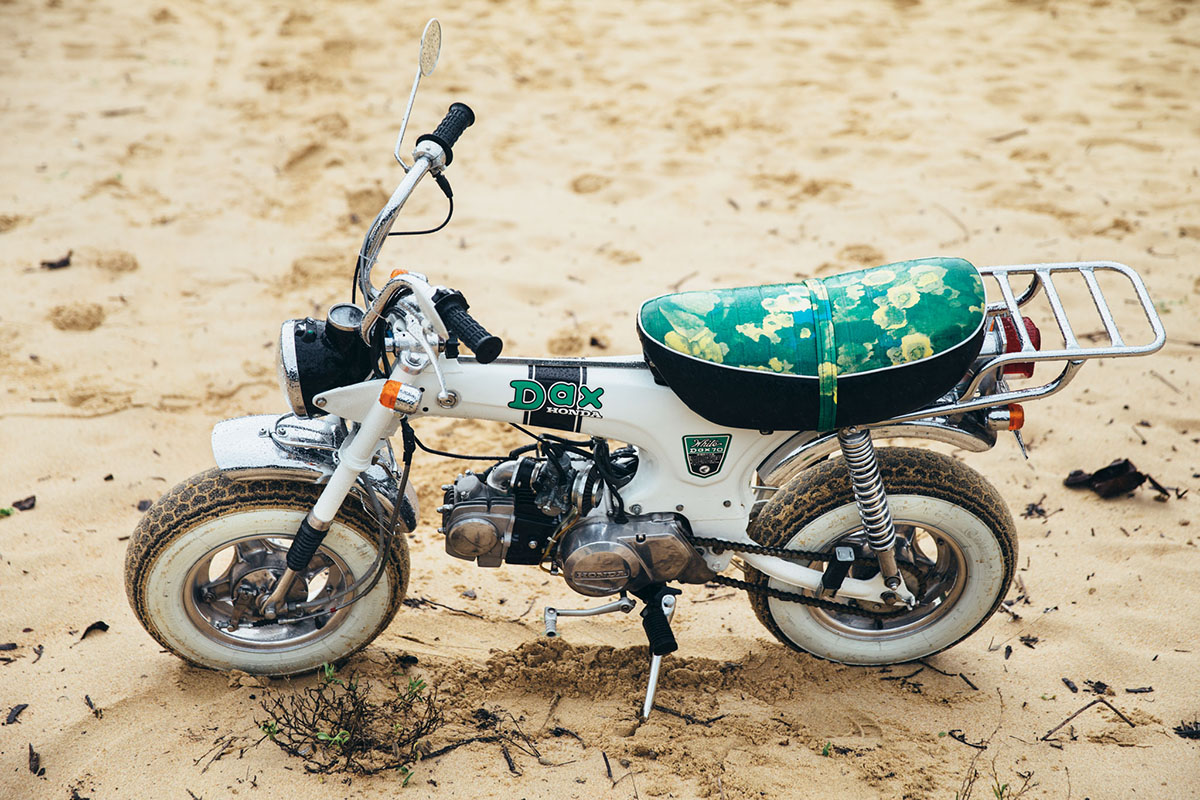 After working in the States at EFI University training students how to tune high performance engines, Ben would find himself in Oklahoma working on a Discovery TV show called Street Outlaws. It would be working on this show that would rekindle Ben’s love for old machines. “I already had my toy cars, so a bit of nostalgia came into play and I began looking for another Honda minibike. The Dax popped up on eBay with the auction ending early in the morning. I set my alarm to go off at 2pm instead of 2am – but luckily I was too excited and woke up at the correct time right before the auction ended. I won the bike and drove straight out the next day to collect it. I had to make a few modifications for a blue slop, but soon enough it was on the road and rolling into the rebuilt 150cc engine with every bit of enthusiasm that the 13 year old me would have had. It turns out girls find 30 year old guys on tiny bikes are also unappealing.”

Cue The Rapture’s song “No Sex For Ben” 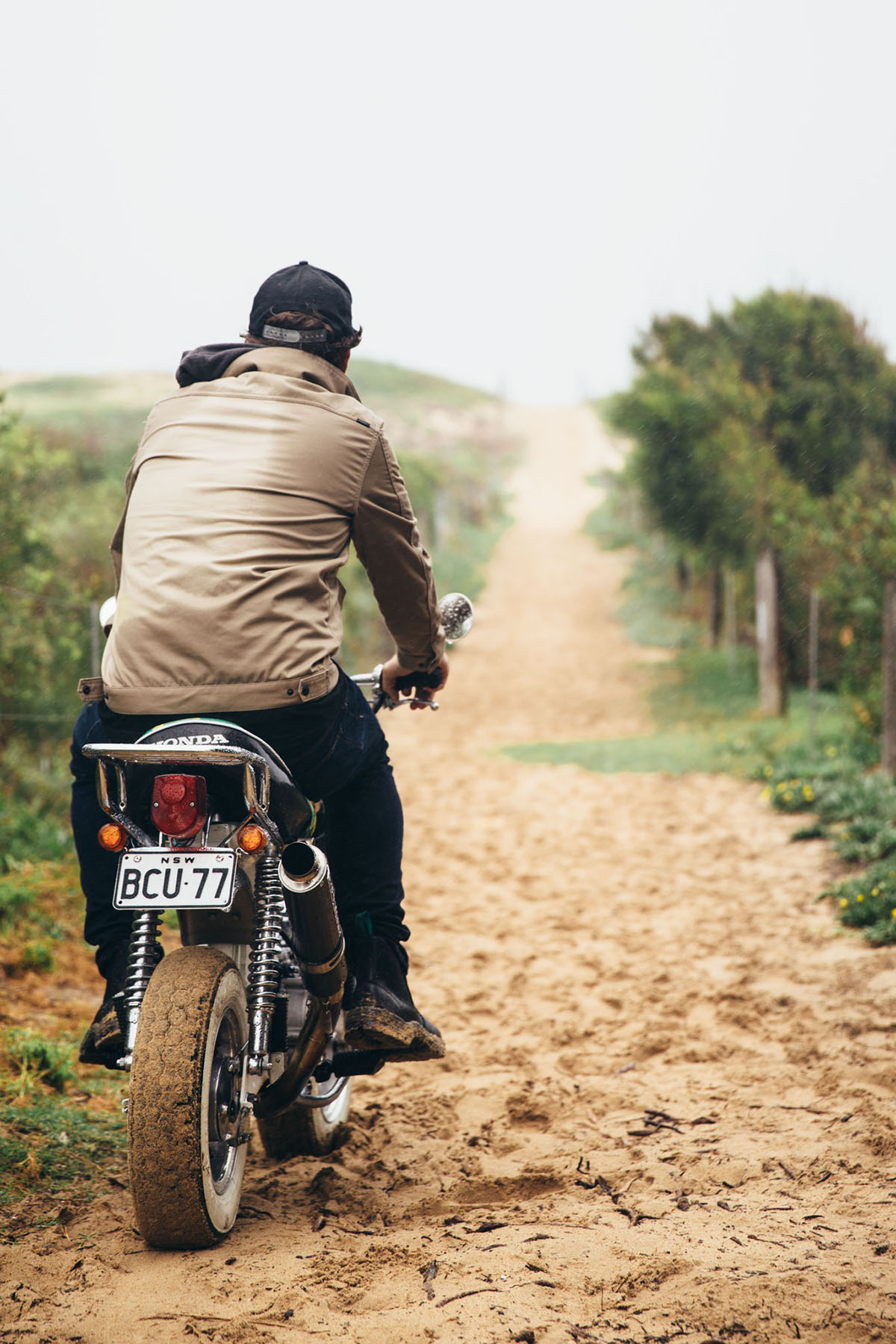 “I normally give people a hard time for buying old machines and not doing any work on them themselves, but this Dax was too nice to mess with. I feel bad, I actually bought it pretty much the way it looks. I cleaned up some bits, but really didn’t add much to its overall appearance or performance.” 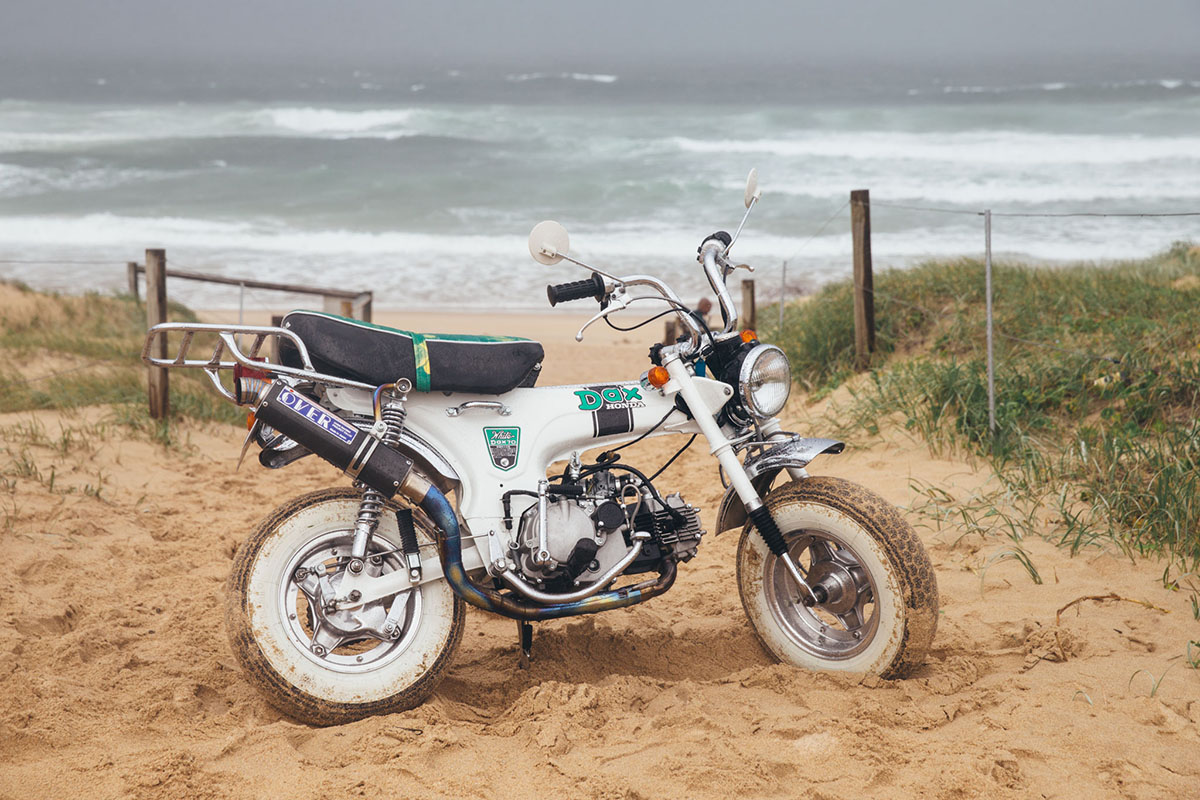 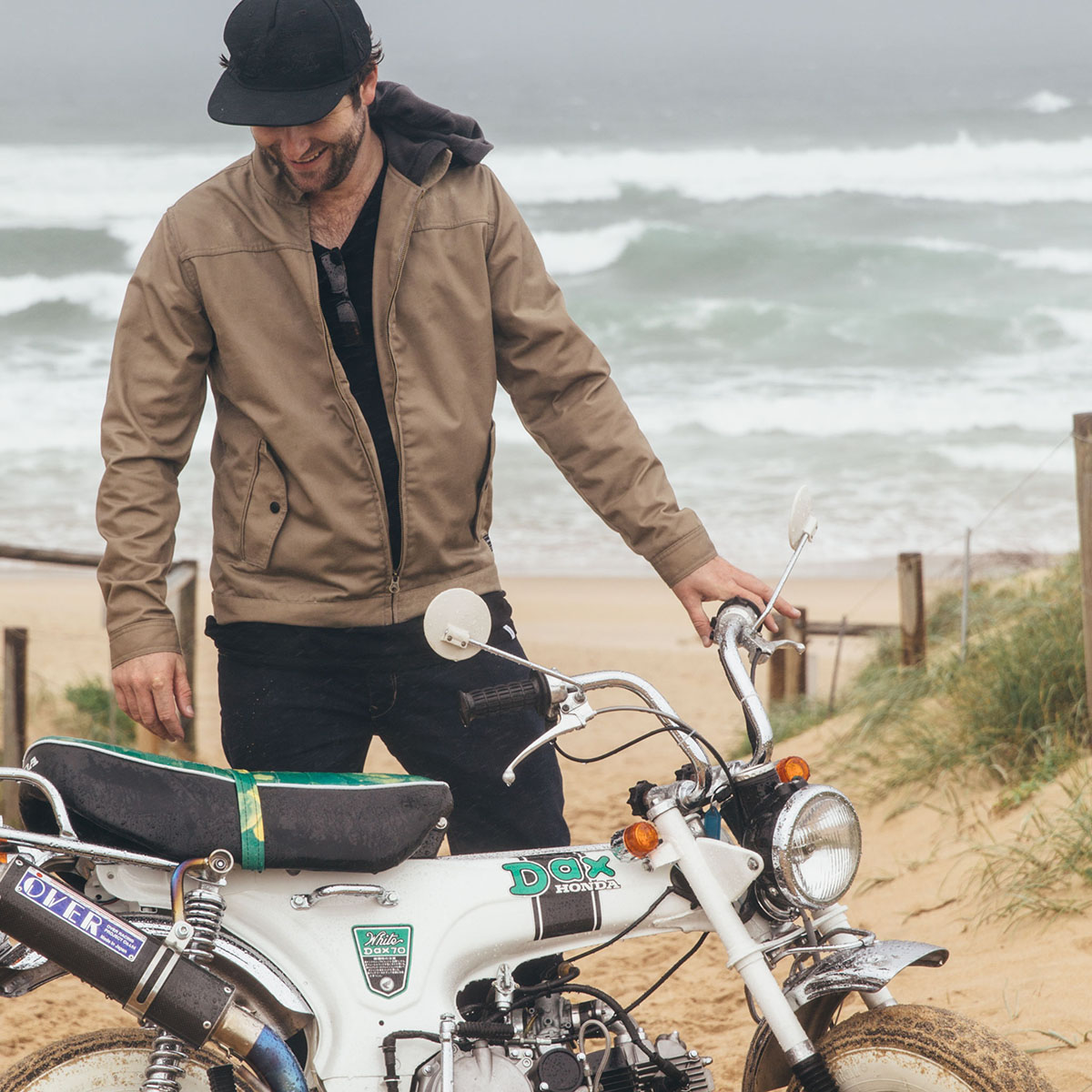 “Truth behind this is… I have a man crush on Dax Shepard. If there was a relationship I’d like to slip into it would be with him and Kirsten Bell. Ok that’s only part the reason – but the real reason is that I love anything old, unique and that helps you imagine what it would have been like back in the 70’s when this was a brand new bike. I like having something that starts a conversation with someone in the street and I find the Dax never fails to deliver. I used to own a Mini Moke for a very similar reason. There is something about owning a registered car or bike on the road, which really should not be legal. I mean the Moke was just a box trailer with an engine.” 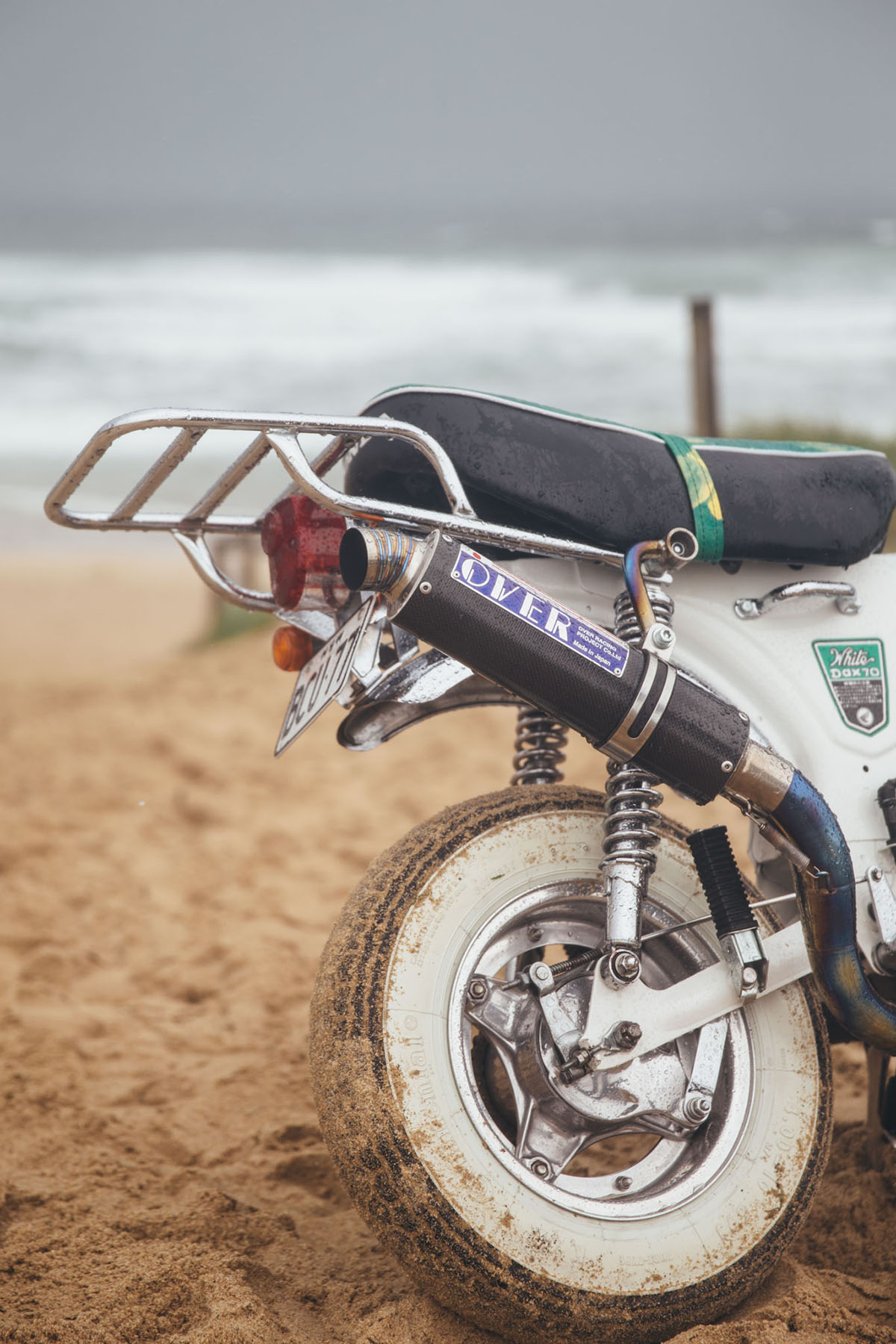 “My favourite thing about the Dax is that it is immaculate and able to live in my living room without being out of place. Most cars and bikes that I own do their share of racing duties so they always have a few battle scars, but the Dax is kept for a Sunday ride to the beach and then bought home, detailed and put on display in my house.’ There’ll be plenty of detailing and de-sanding to be done after it endured the wind, rain, and silly sand burnouts at the beach. 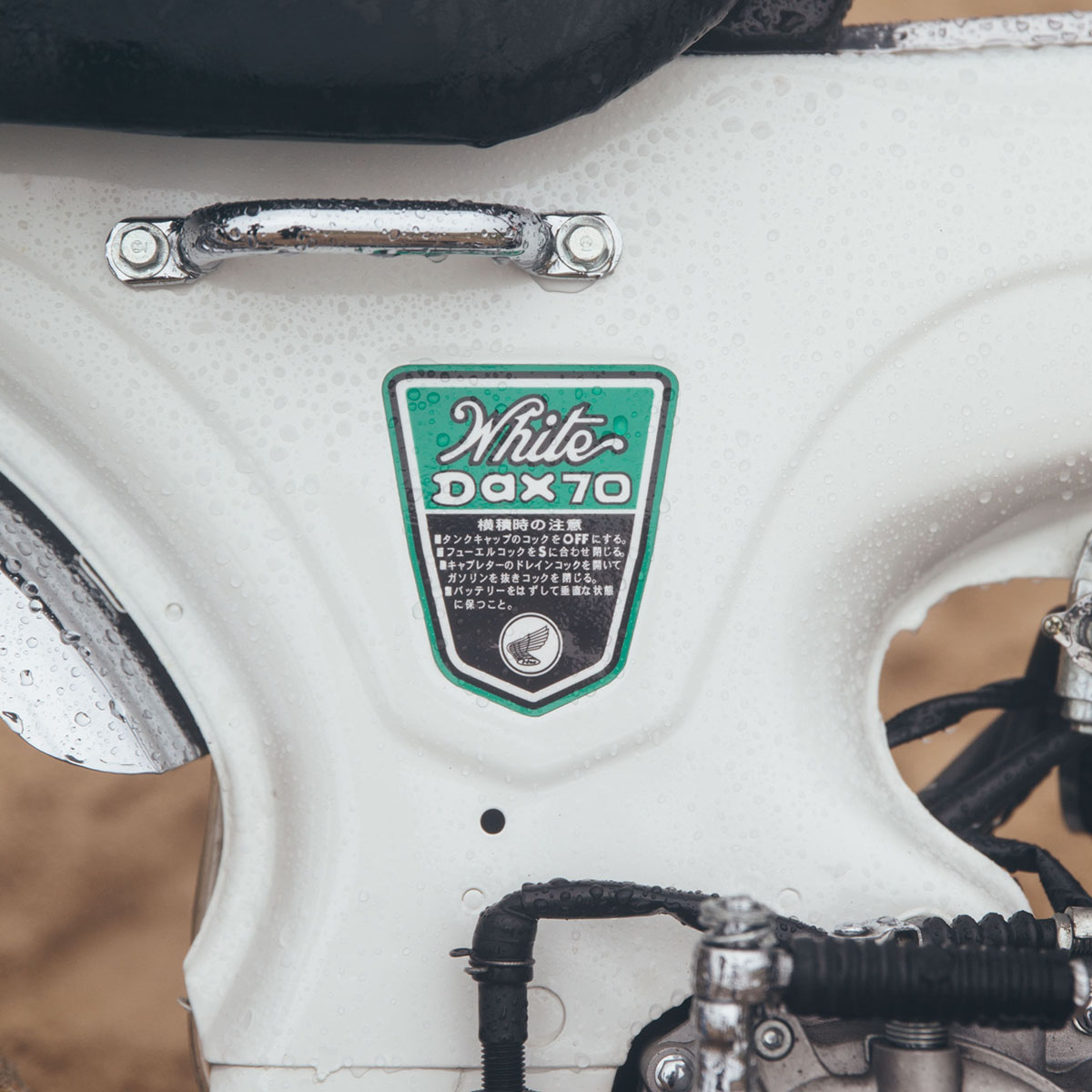 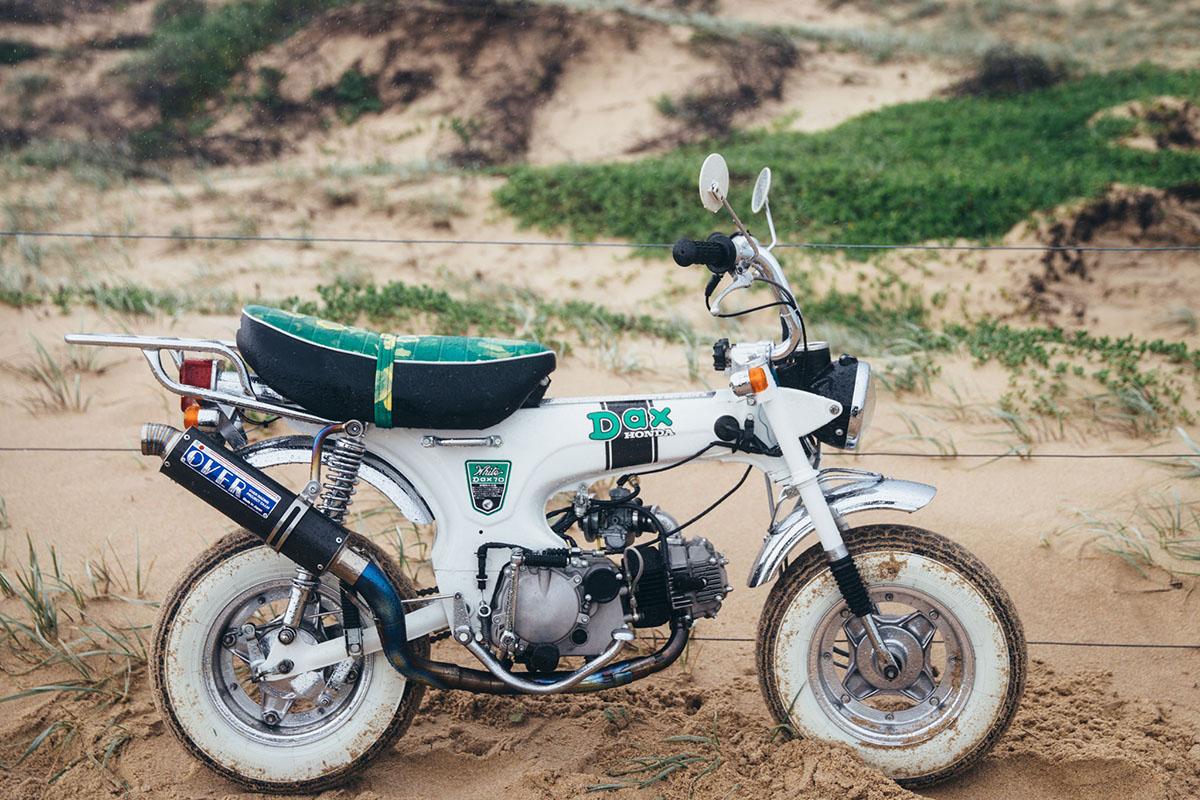 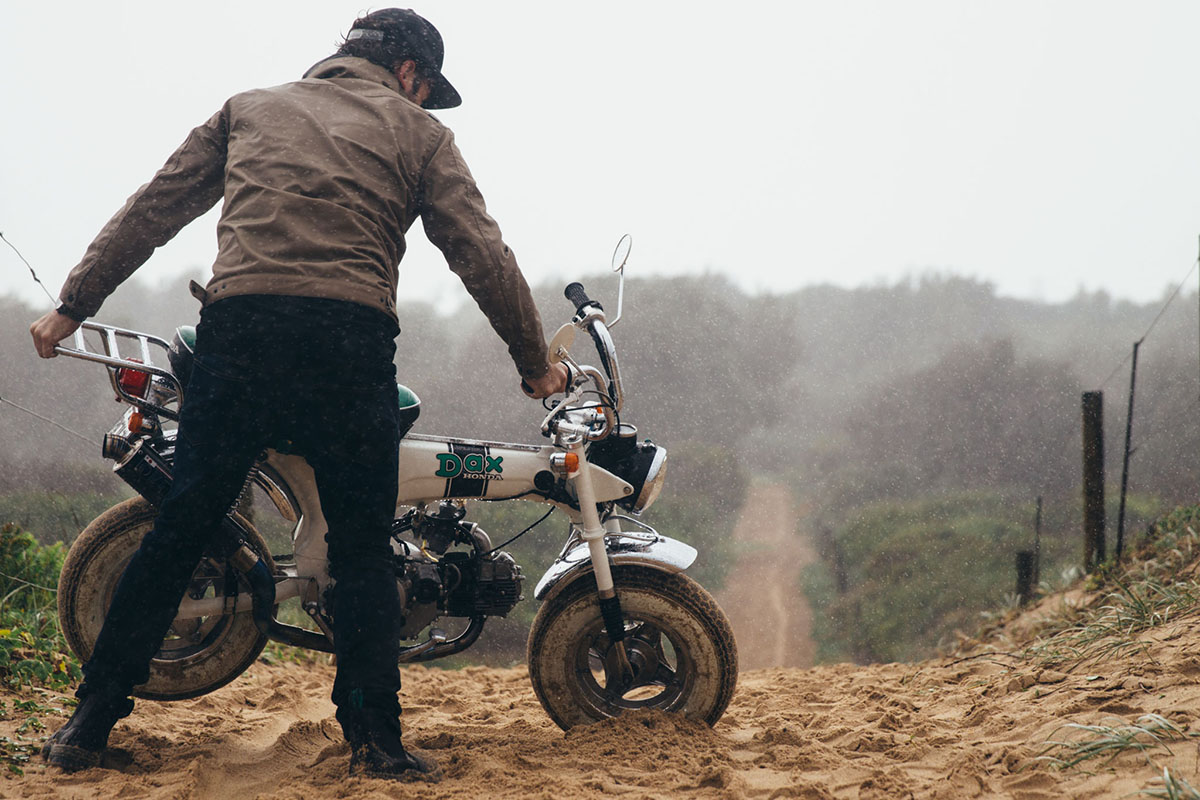 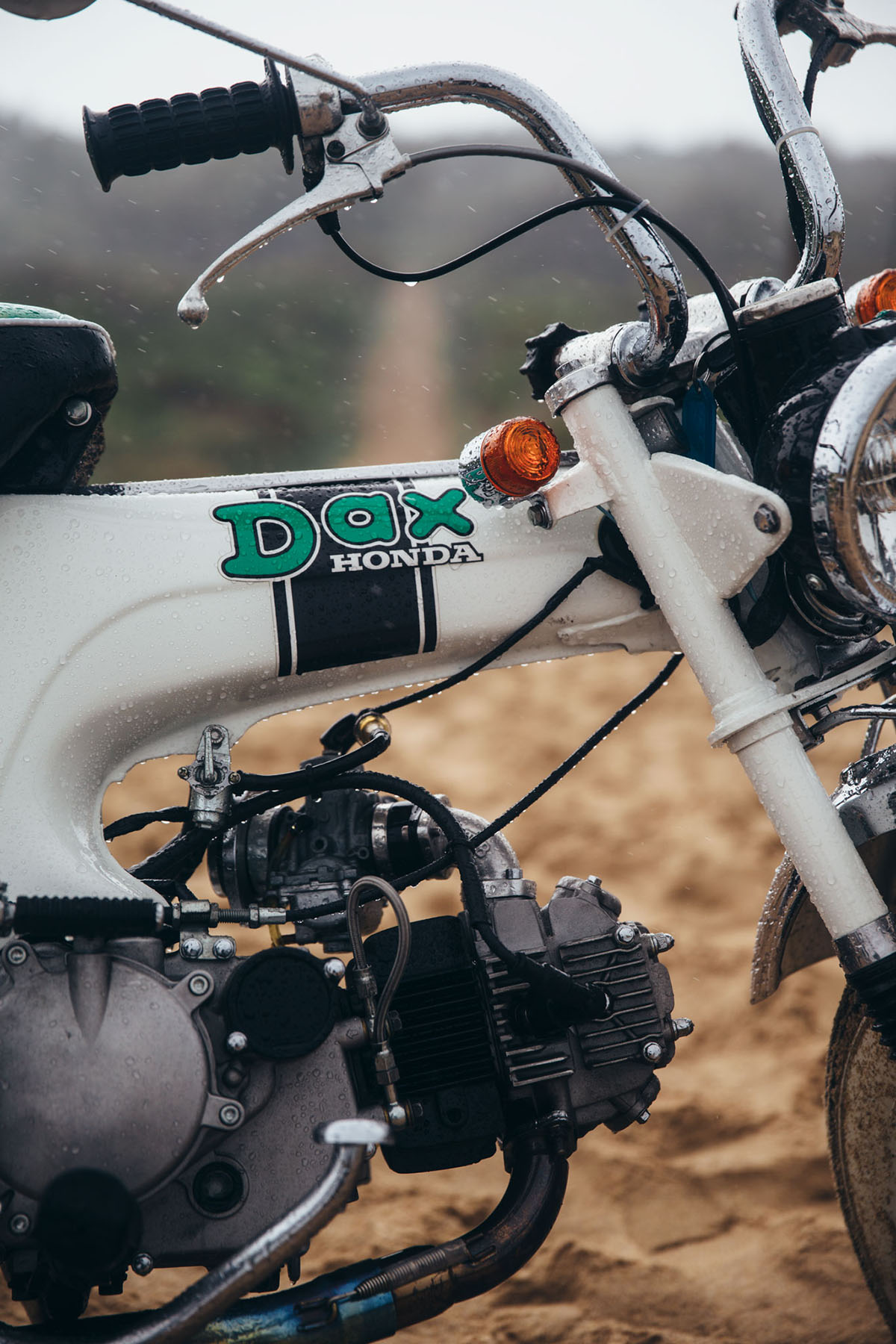 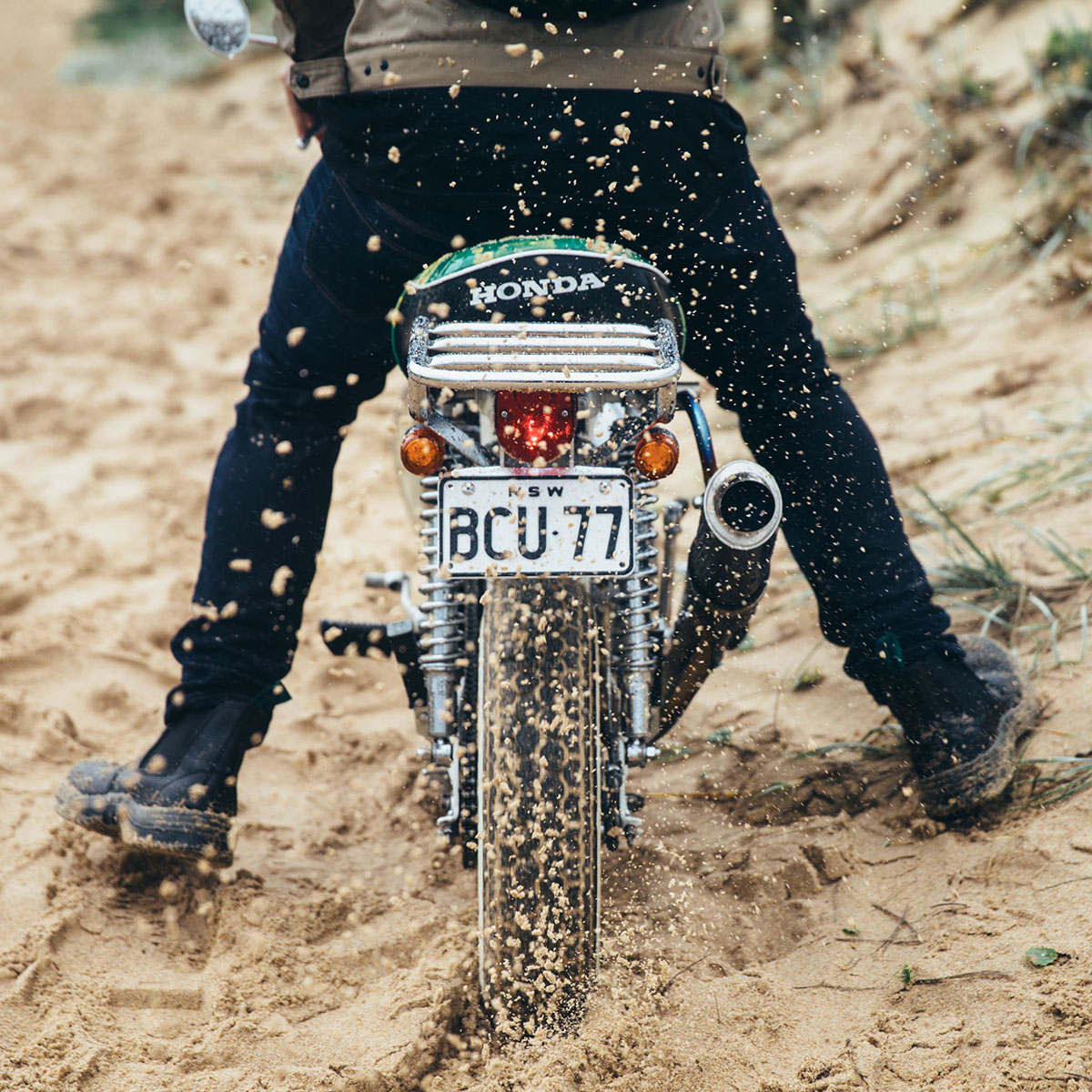 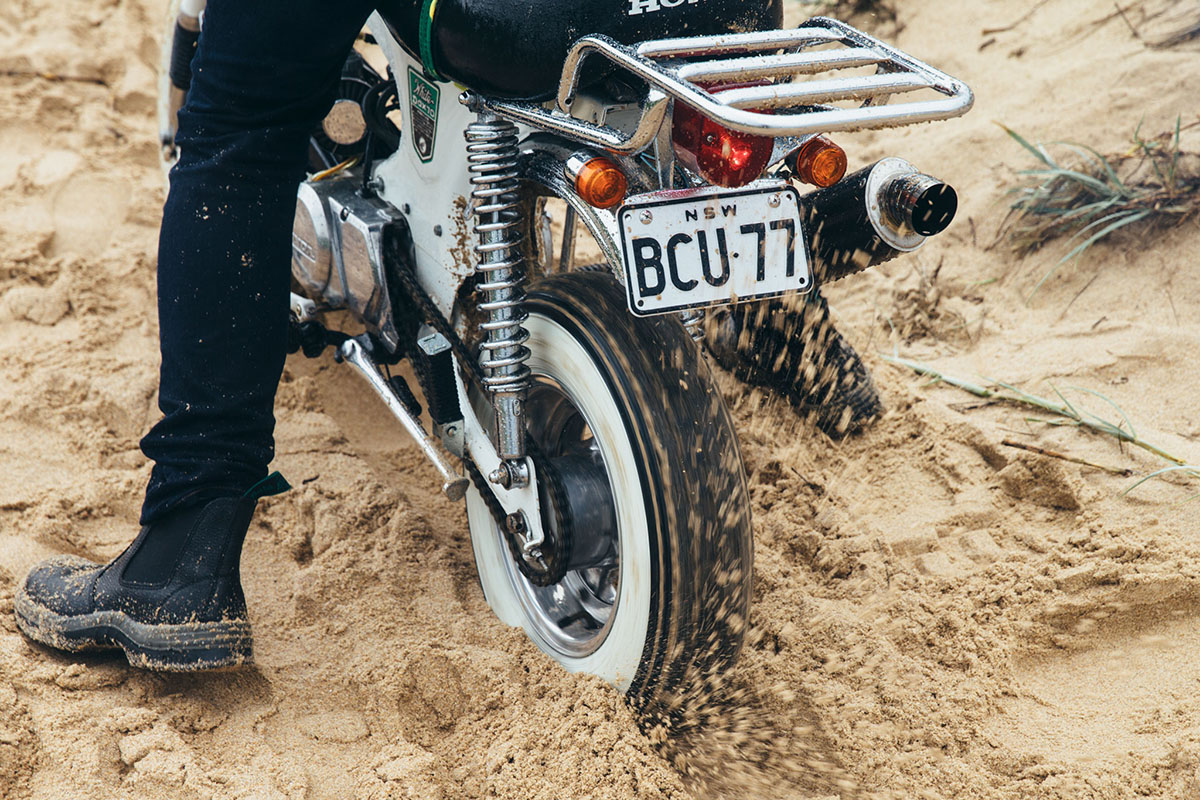 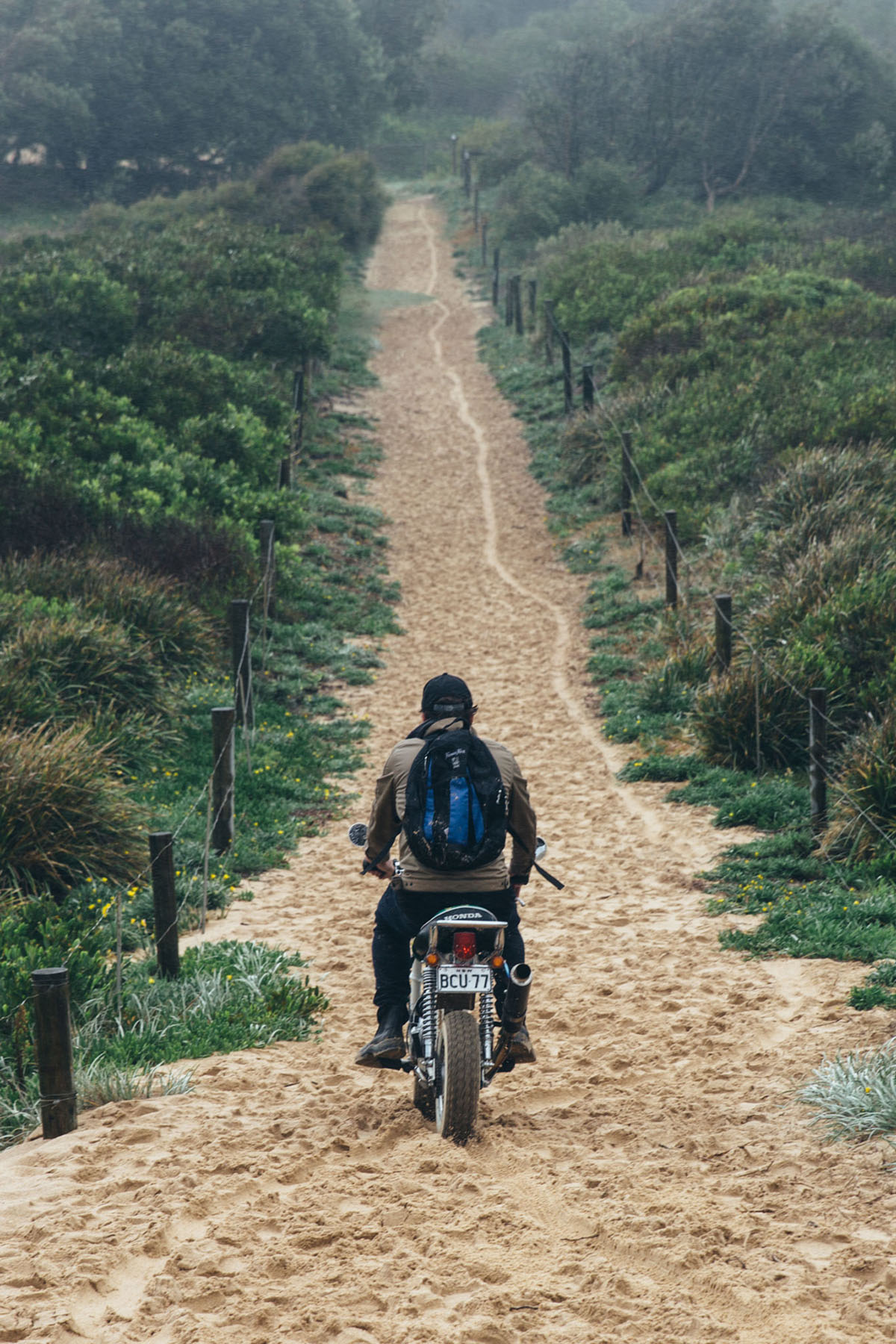 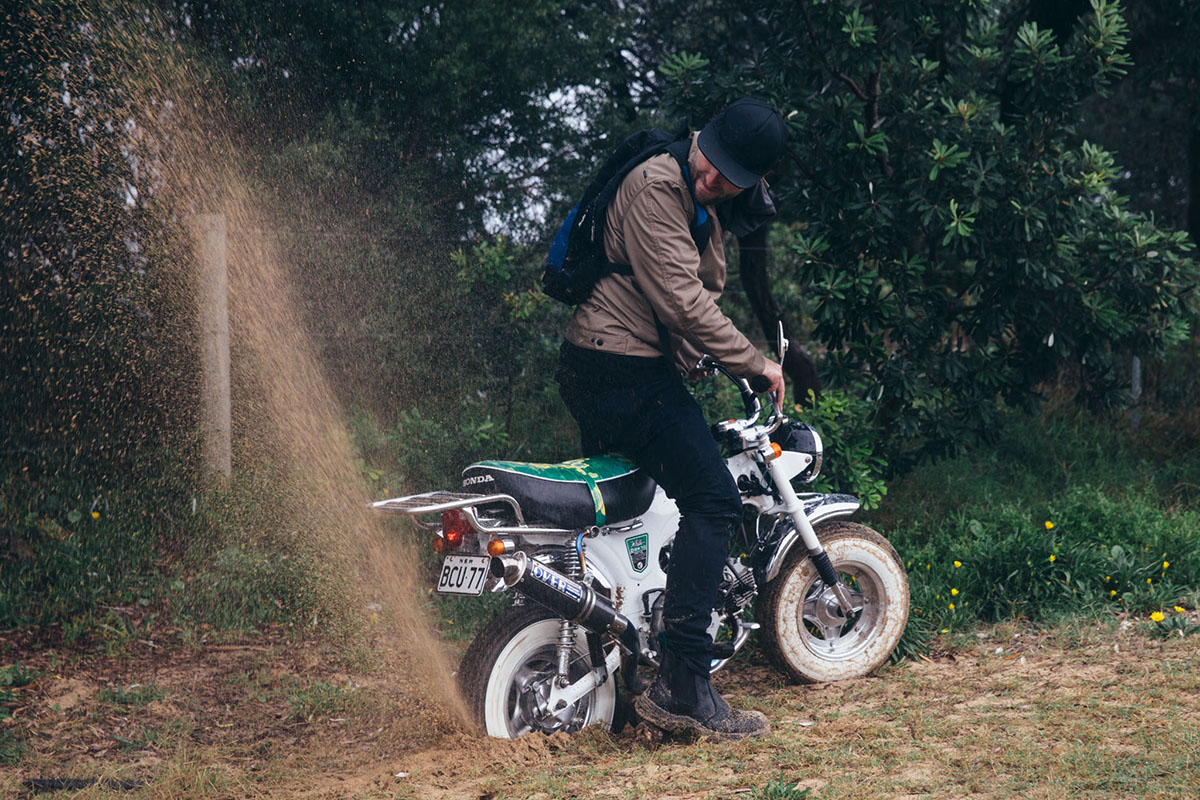