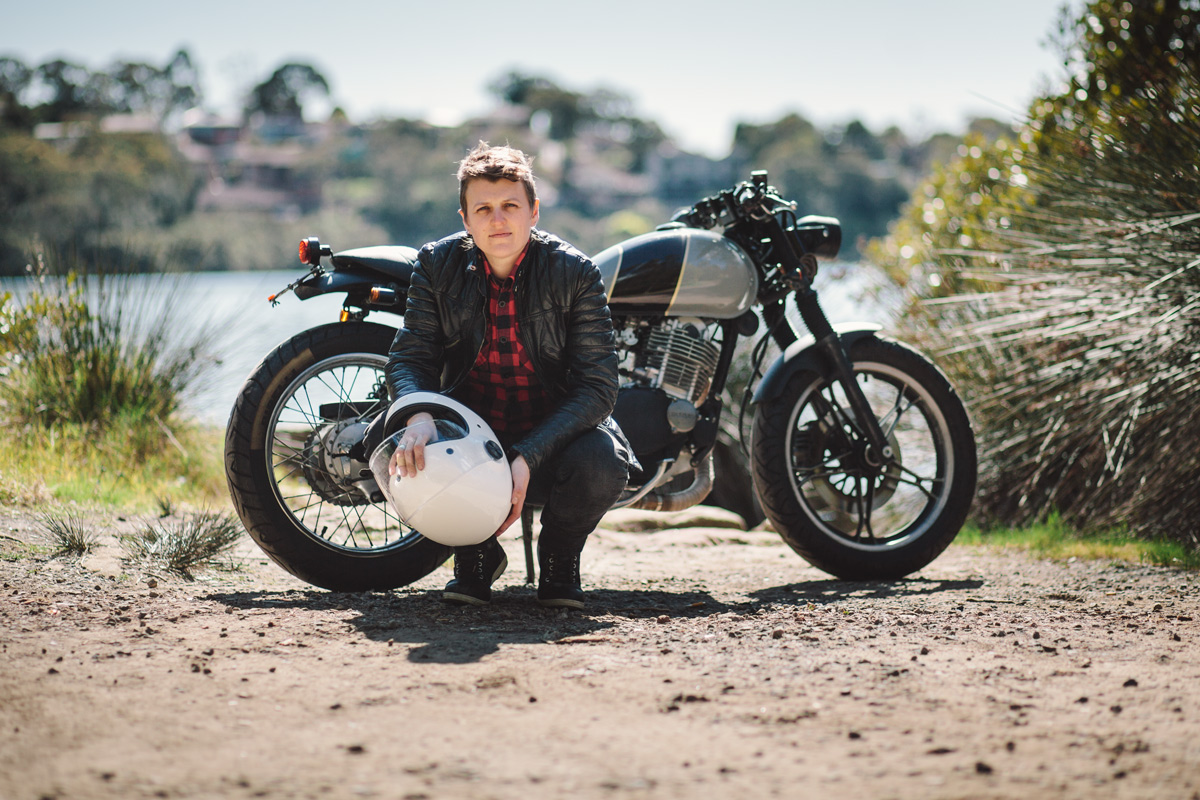 Harmony and balance play a big part in Tori’s life, both in her profession and her passion. Most of her time is split between being a professional violinist, and working on her motorbike. It’s a contrast that breaks stereotypes, defines Tori and inspires her. 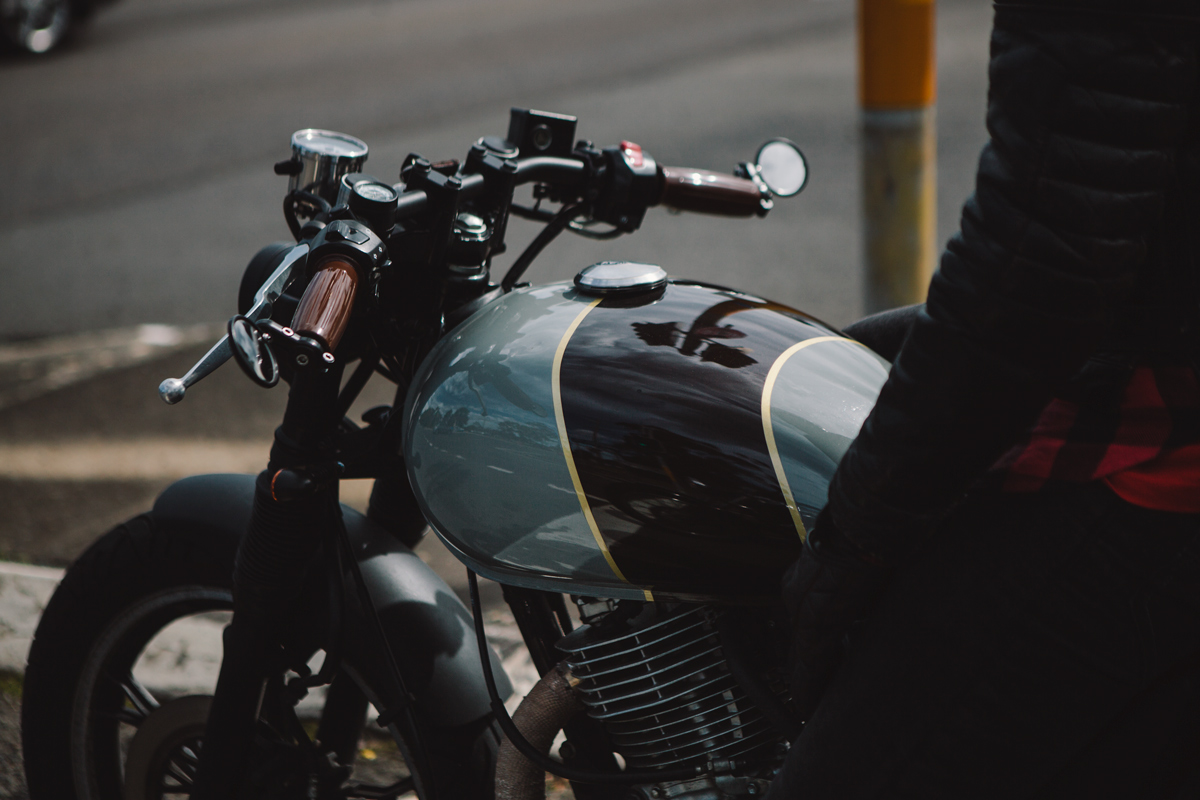 Tori’s passion for bikes formed as a natural progression from bicycles. As a kid she was limited to just one bike, because as her parents said “one was enough” despite her desire to own as many as she could. This meant each bicycle was something special, “each bike meant a great deal to me and all of them felt like a best friend”. One Christmas, Tori was presented with a bright pink, girly bike when she was ten years old. This completely horrified her unfortunately, as it certainly wasn’t her style. “I felt super bad about hating it and hurting their feelings, but they could see the bike was not my soul mate and swapped it for a boy’s model so I could do mad bunny hops off the gutters around my local streets. I liked bikes because they were fast. Riding was where my brain was totally occupied by staying upright, and not distracted or quietly fighting with the slowness of the world around me. My bike could be flying as fast as my mind, and it was where I was peaceful.”

“As I got older, I kept buying push bikes or finding them on the street, until it got to a point where I was teaching myself to build a single speed on the living room floor in my apartment. After that, I totally dismantled and stripped the frame of a fairly expensive Giant road bike and had grand plans for customising it. That never happened. Motorbikes came into my life properly around then and the result of that is a handful of bicycles now hanging in my Mum’s shed or dismembered and in various boxes stored all over Sydney. 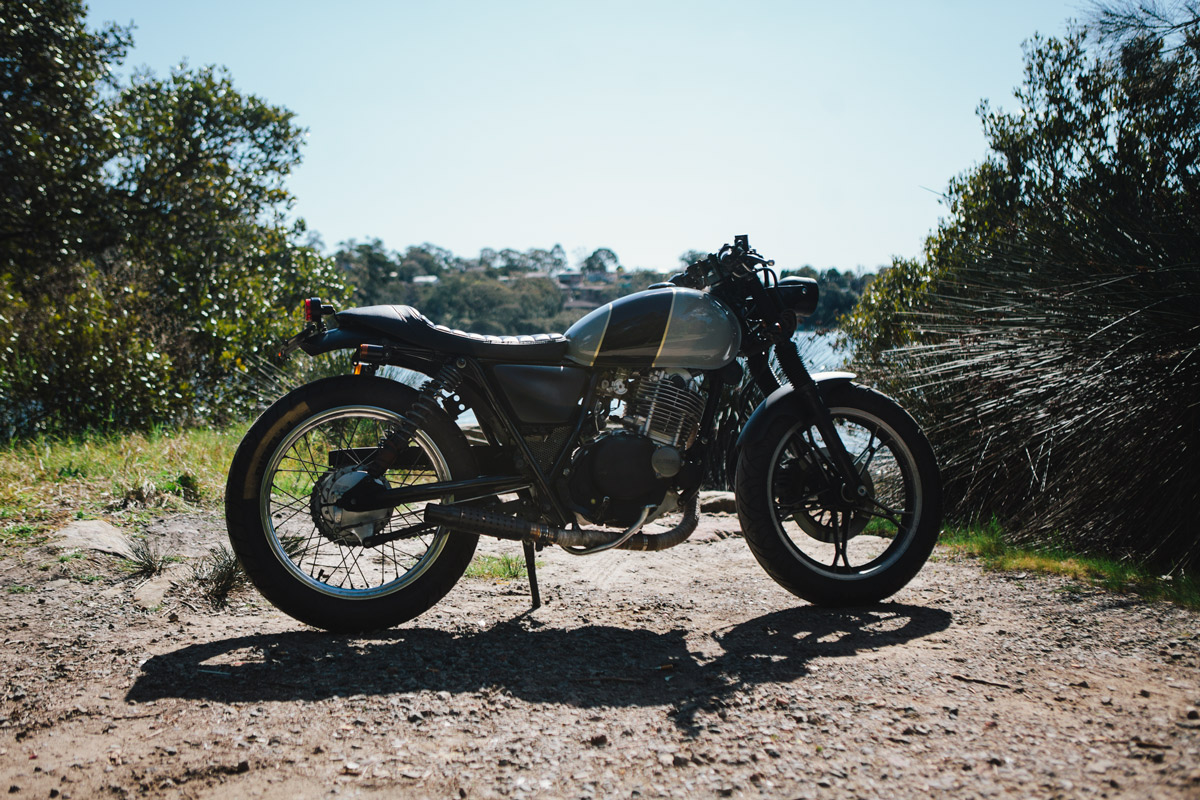 Tori’s current bike is a 2012 Suzuki TU250 that she has heavily customised to suit her own style and needs. “My bike doesn’t have a name, or a gender. It’s a machine. But we are good buddies.”

Working on motorcycles has become a fusion of things for Tori that has become remarkably therapeutic, and important to her. “I can be artistic, logical, creative and pragmatic, all at once. I used to paint artworks, I’ve made music in my own home studio set up, I played in bands for over a decade and I’m always excited about craft, but working on bikes is so different to those kinds of creativity. The hard rawness of working with metal, wires and power tools is good for me. I can’t be without music as it’s been my major purpose in life for 35 years, but there’s a bone-deep sense of catharsis and meditation around shed time that I crave after a day or two away from it.” 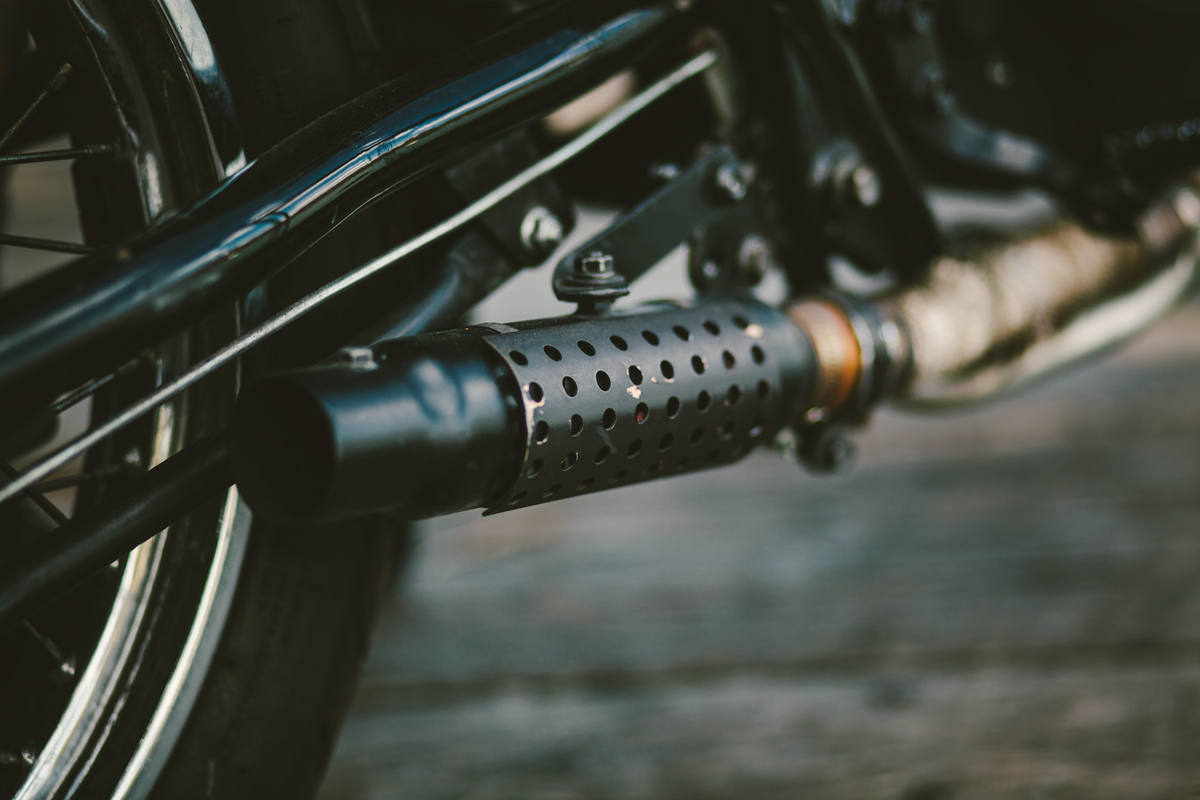 Finding the space to complete her work on bikes hasn’t been easy, however. For the first year or so, Tory had no garage, carport or driveway to act as her workspace. All she had was a one metre square spot of concrete at the front of her house, where she would work for hours and learned the fundamentals of work and customising her bike. “Because I was always sitting on the ground with tools and a semi-dismantled motorcycle spread across the public walkway, I got to know the neighbours quickly. That’s worked out well as I found we live near an ex-custom-Harley builder, a qualified mechanic who immaculately restored his own Mustang, an electrician, an extreme DIY-er who happily gives away awesome tools, a vintage BMW collector and two very welcoming brothers over the road with spare room in their double garage. Now I have a big square of flat, glorious concrete under foot to drop my washers on. It also has walls and a roof, plus a power point. Amazing.” 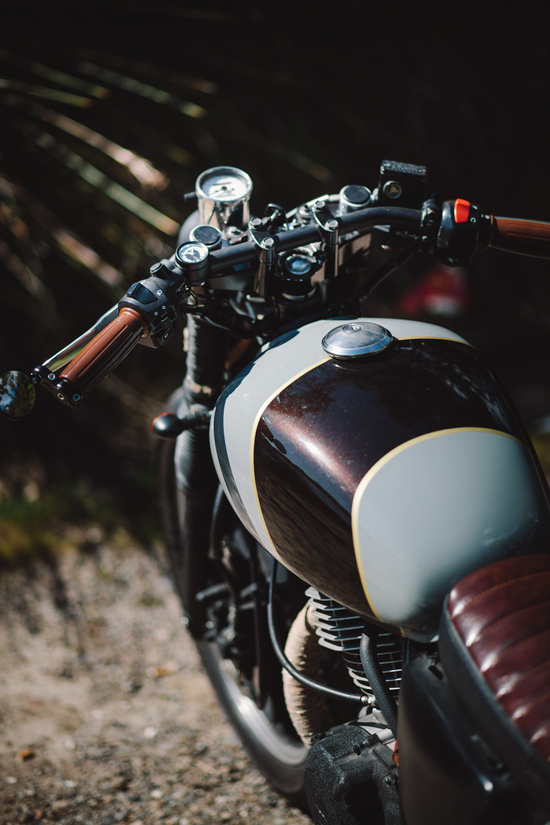 A key part on this bike is the mean looking exhaust, which looks as if it is the offspring from a machine gun. It also has a powerful noise to match. “The rough industrial style of it incorporates a sleeve of brass I found in my Dad’s stuff. He died eleven years ago but in his prime, was an engineer/fitter and turner/boilermaker, so I use a lot of his old tools, which are still good after fifty years. I feel like he’s sort of still around taking care of me with his top quality parts and tools while I modify an ADR compliant vehicle with cable ties and mismatching bolts, into something unique that I then ride at high speeds. But that muffler grunts like a boar at low revs and barks at clueless car drivers when they want to merge into me at 80kph. So I guess that muffler’s taking care of me as well.” 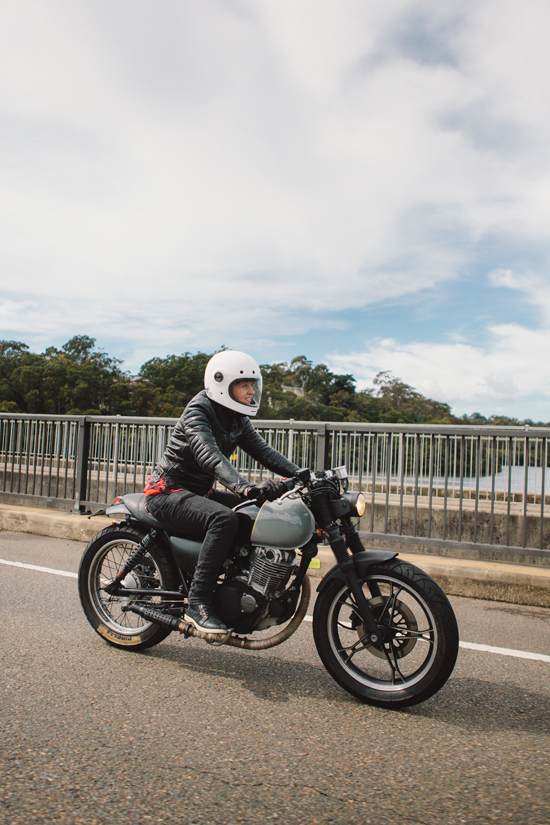 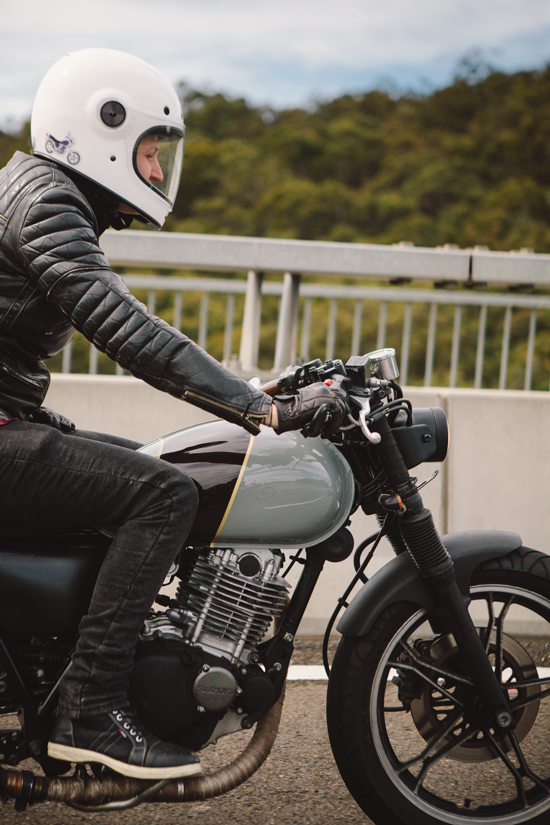 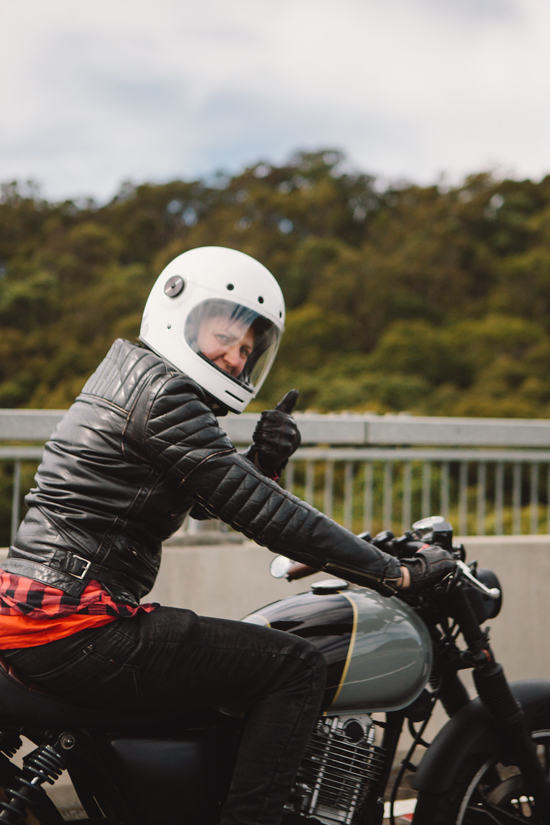 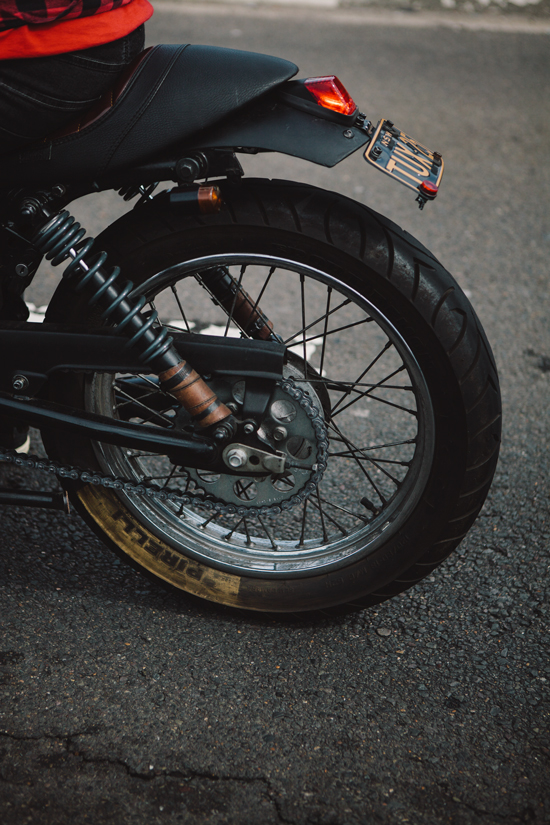 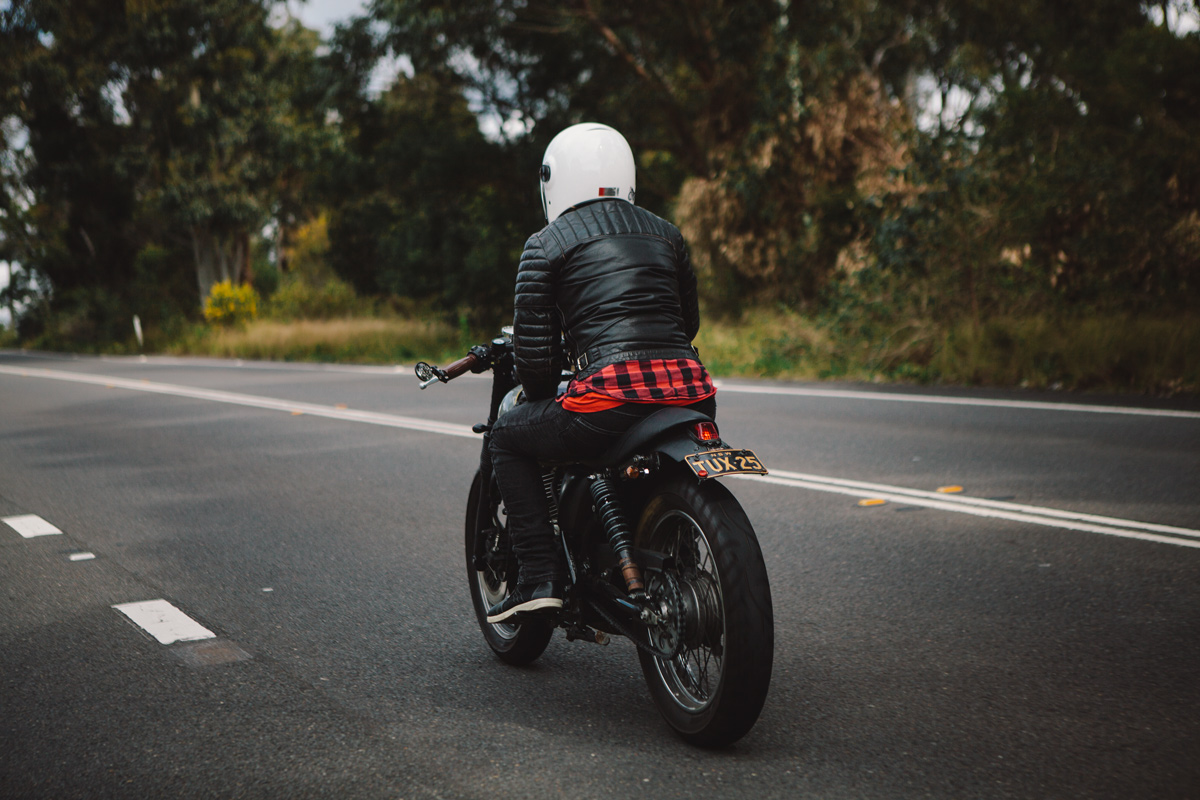 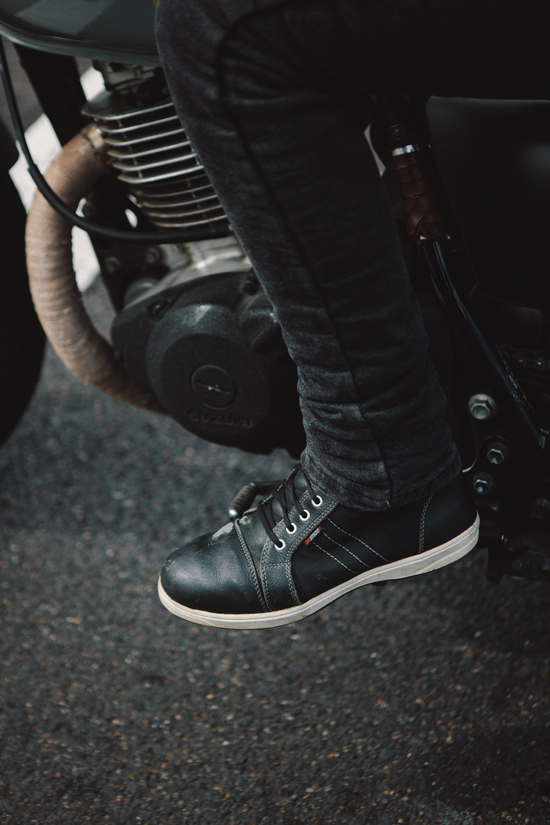 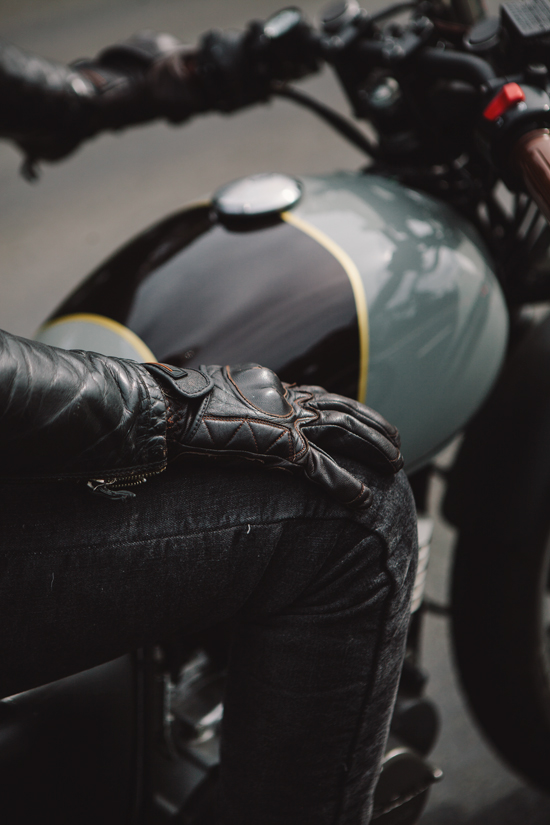 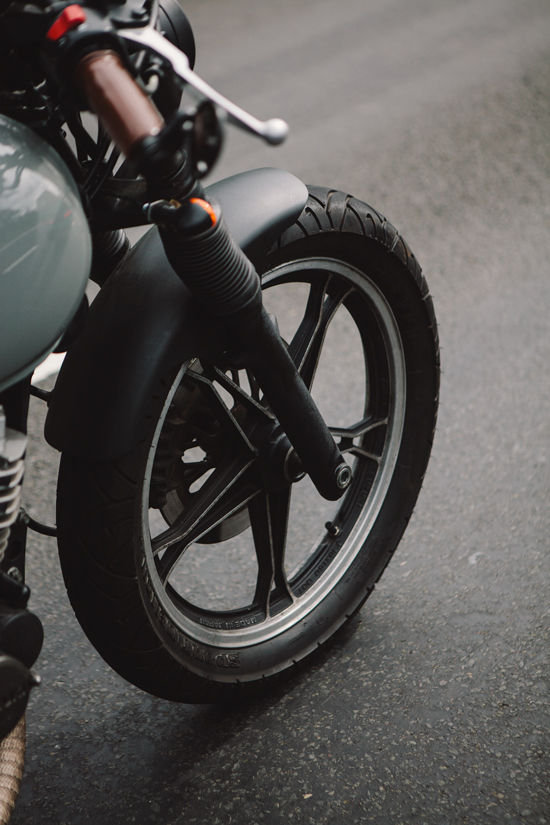 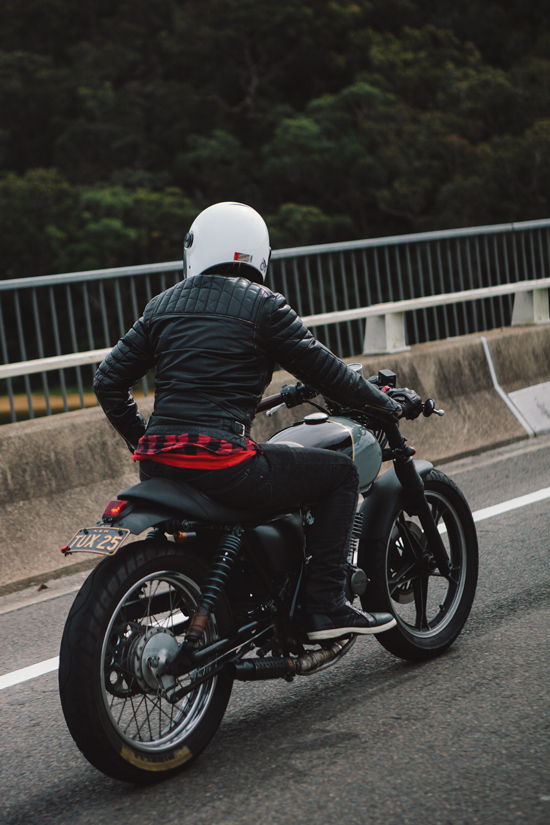 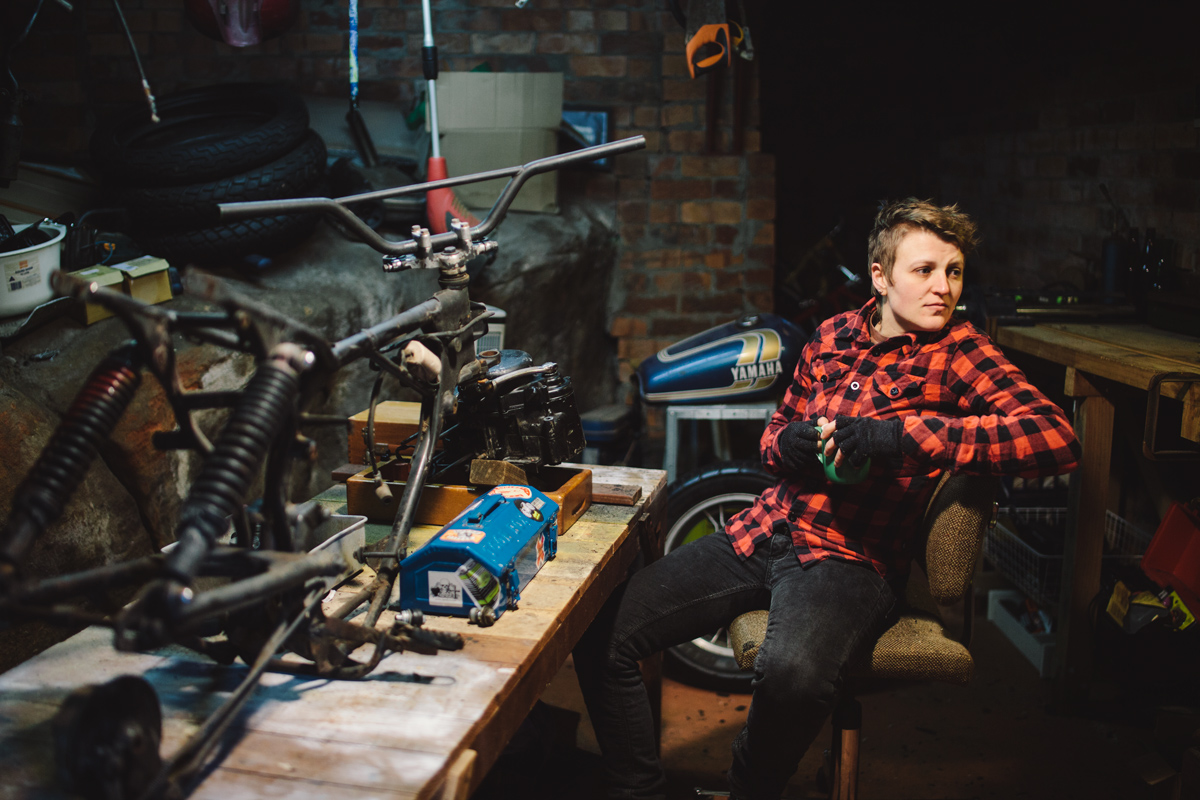 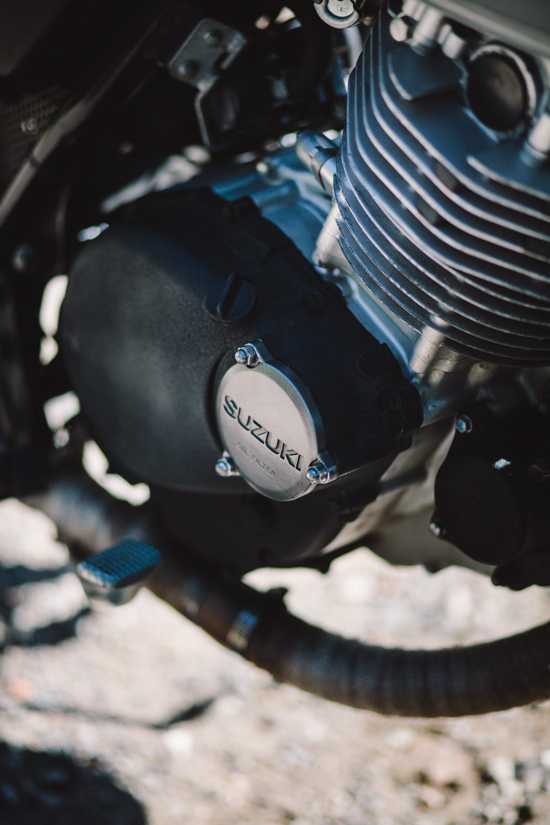 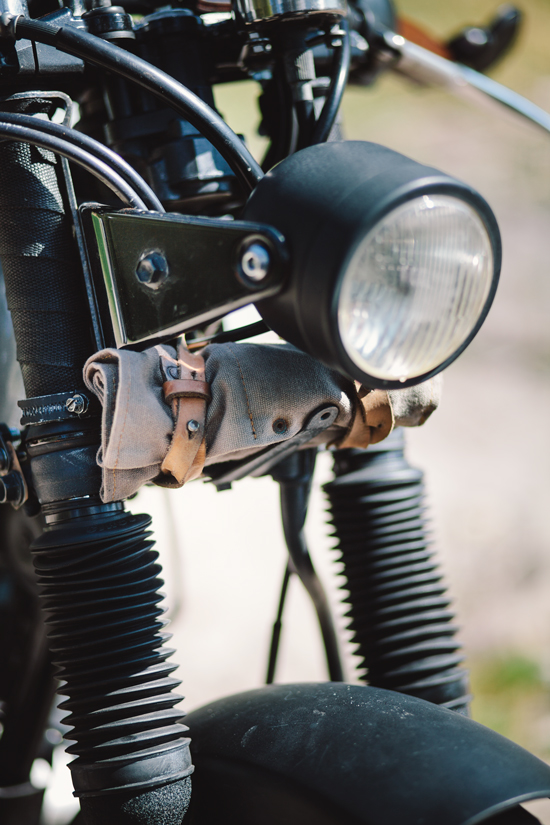 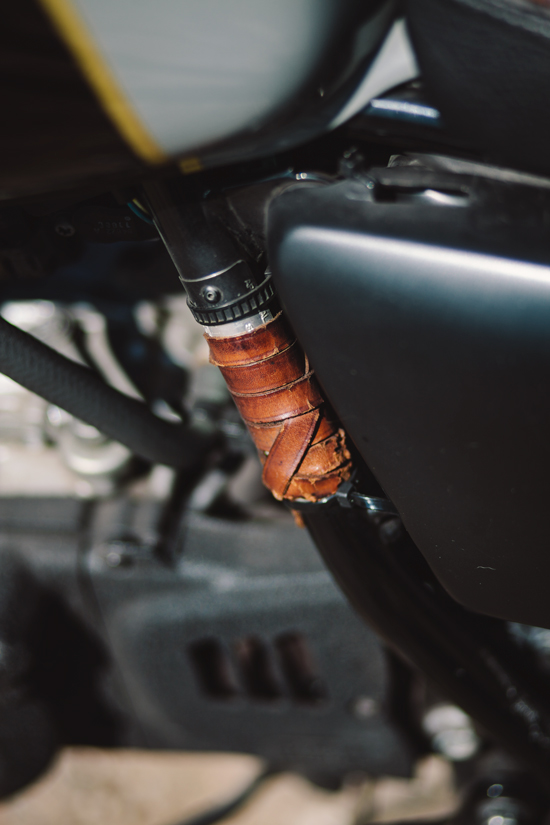 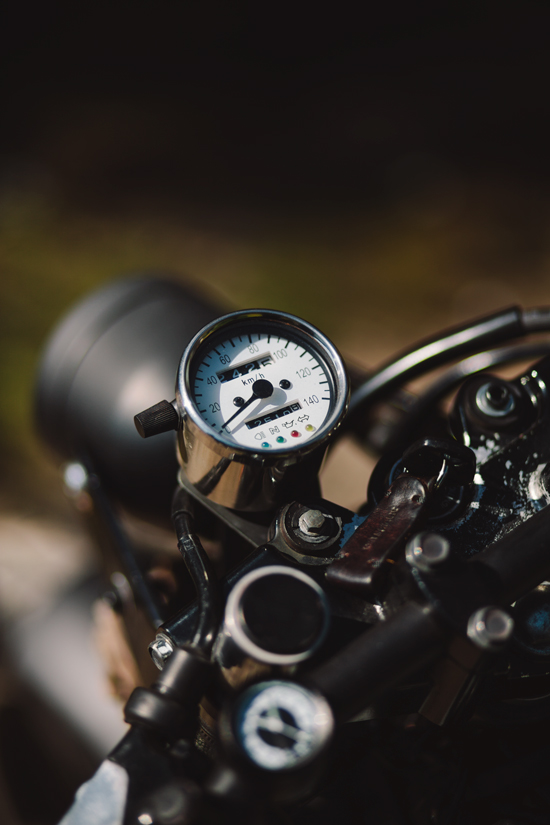 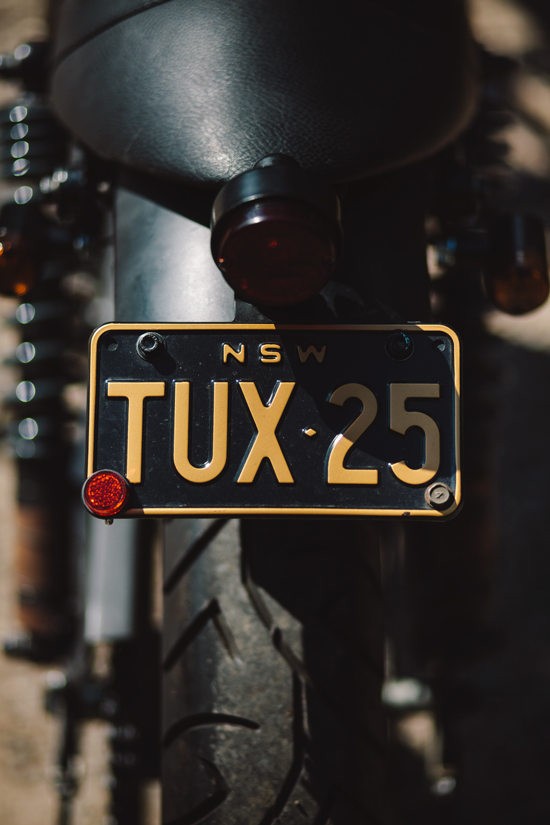 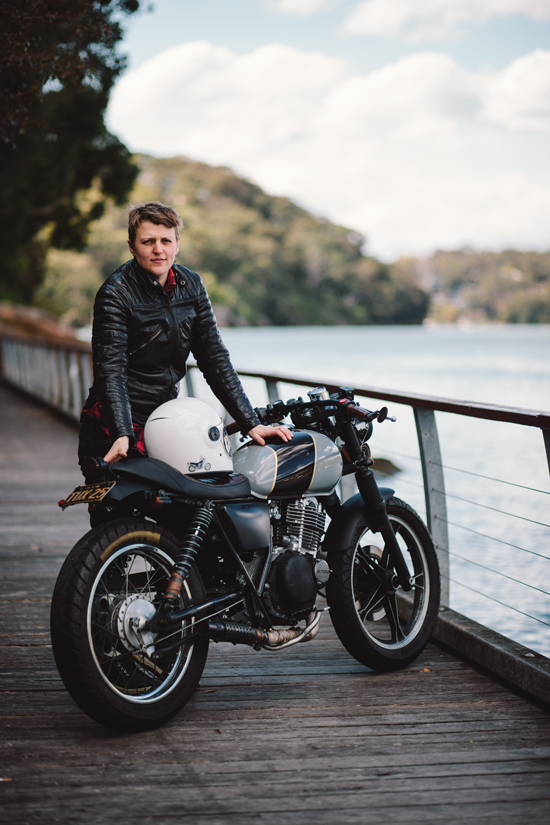 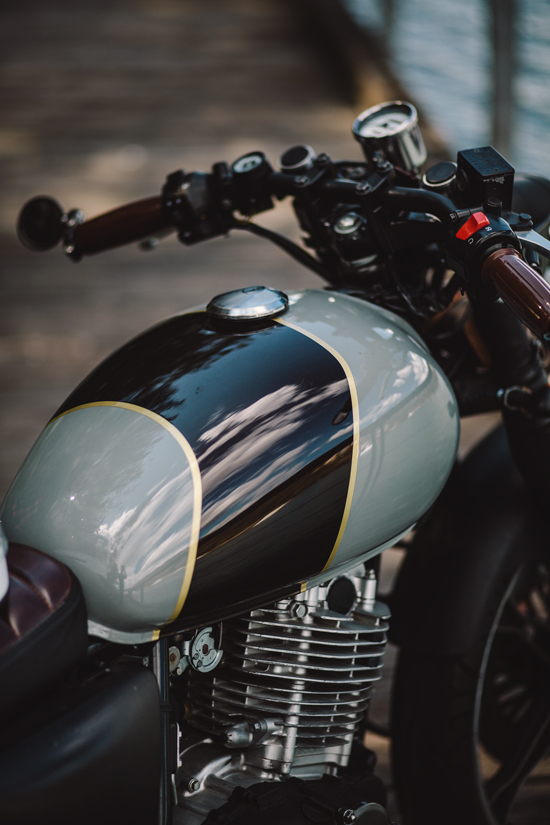 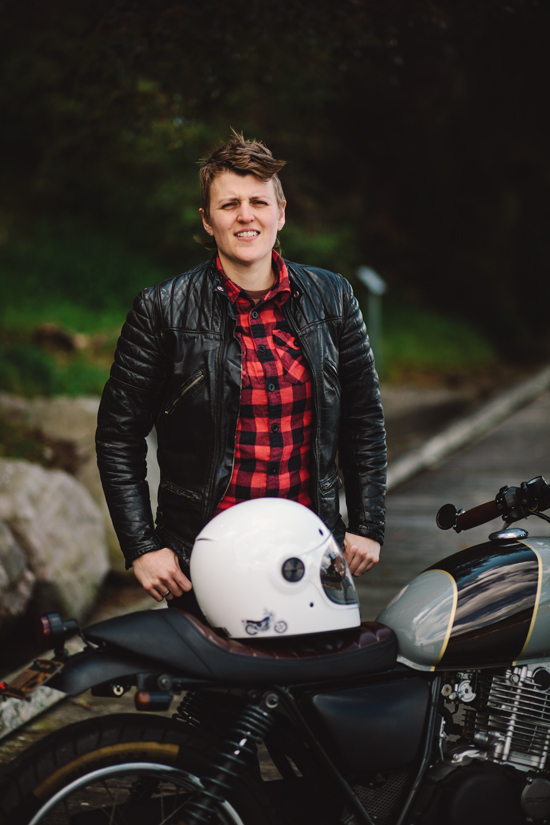 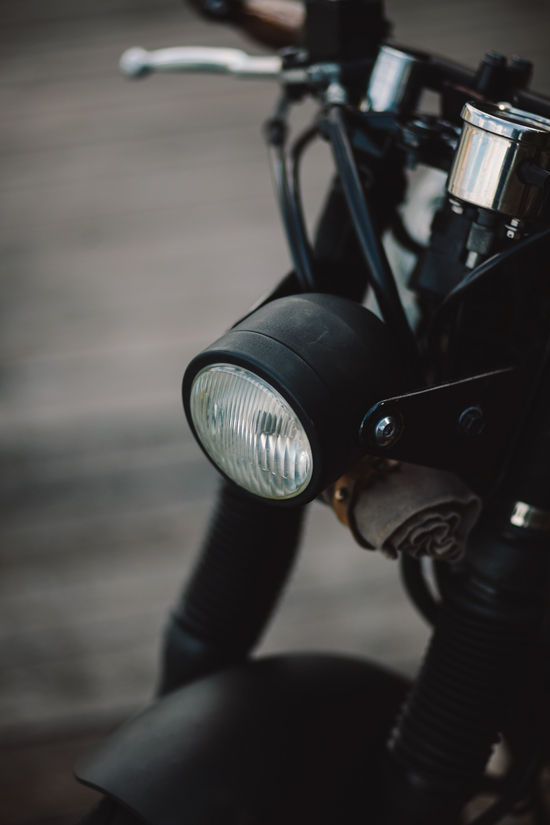