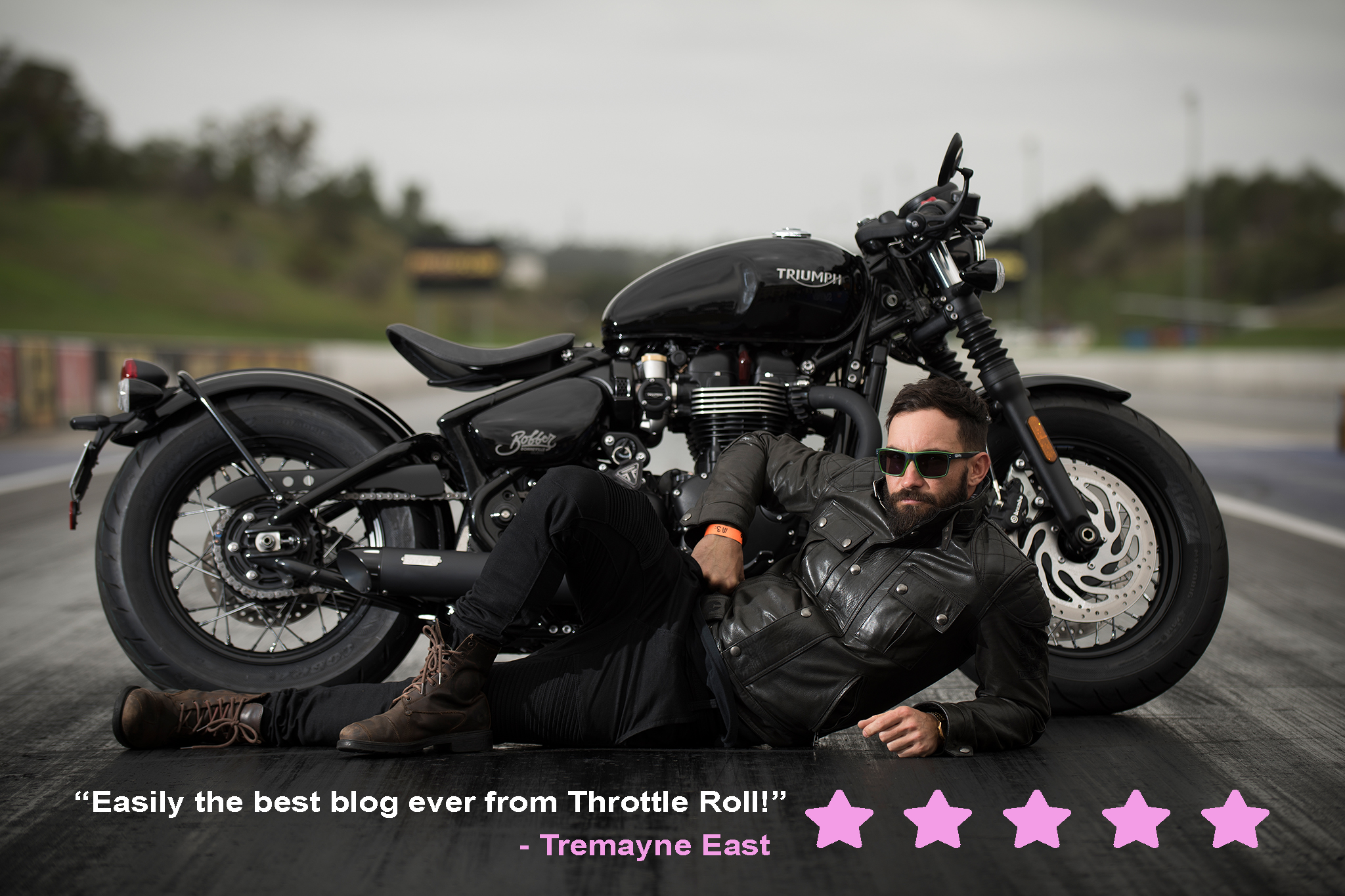 Being a mad Triumph fan (and to help a brother out) I was kindly asked to represent Throttle Roll at the Triumph Australia official launch of the new Bonneville Bobber Black and new Bonneville Speedmaster. 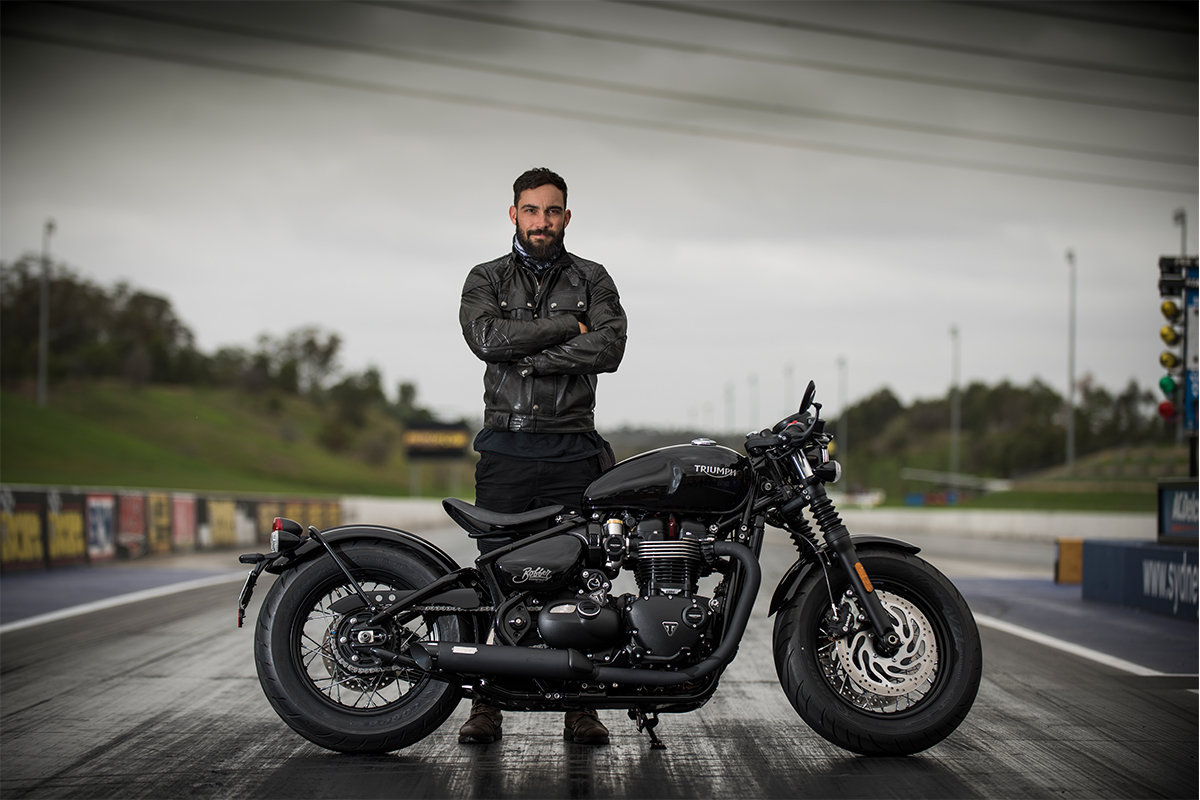 Having never been on a bike launch before I asked His Holiness Hawwa what’s involved.

The short answer was “thrash some bikes around Sydney, be wine and dined, get photographed, critique the bikes, pretend you know what you’re doing and spin some shit with other top journos. Oh, and hang out with Charley Boorman, all for a couple of days.”

Nek minnit, I’m online applying for extra leave to extend my Easter holidays, and immediately the excitement butterflies begin to build up in anticipation. 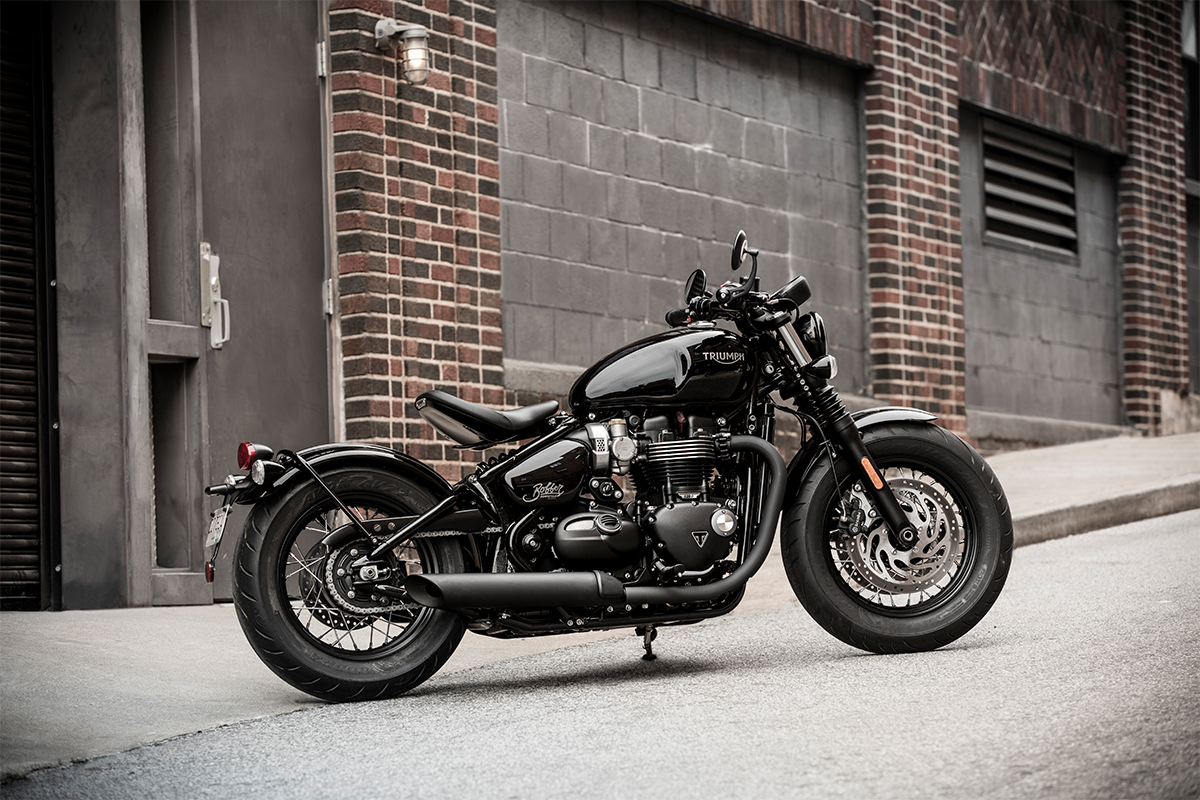 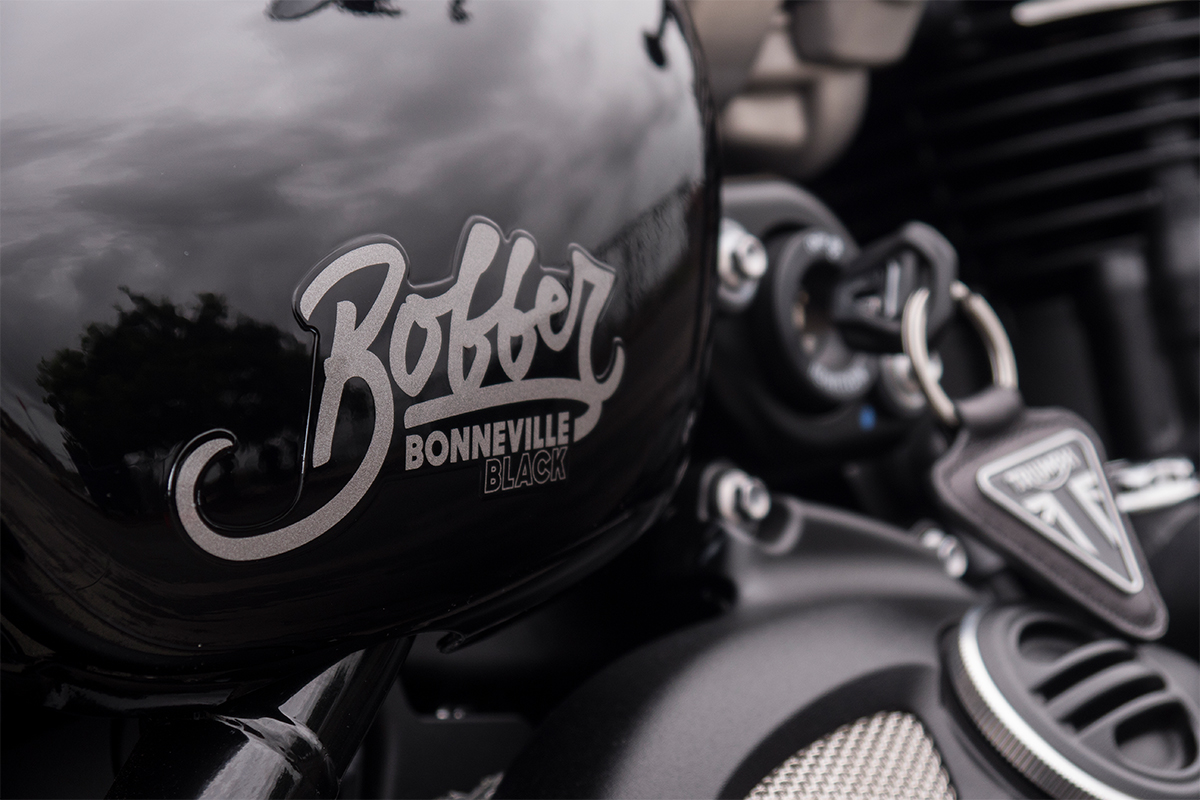 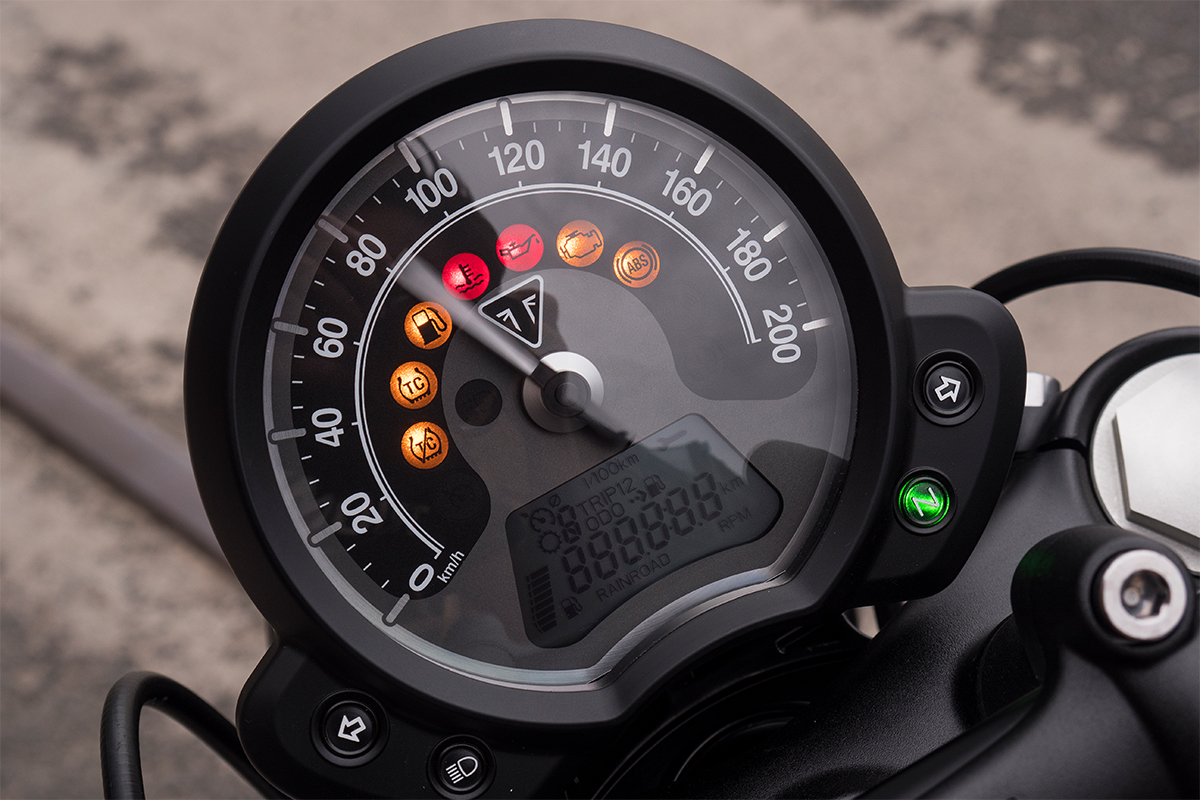 I was lucky enough last Easter to have borrowed a brand new Triumph Bobber for the Throttle Roll pre-Party Bike Ride. Being the lead rider, it was a great way for Triumph to show off their latest 1200cc High Torque monster, which really wanted to fit in with the cool cats of the custom bike world. It turned out shortly after its launch that, the bobber became so critically acclaimed by fans around the world that it became Triumph’s fastest selling motorcycle in its 115 years of existence. Who would’ve thunk it.

I had that Bobber for 5 full days and enjoyed every 800 km’s that I put on it– around the city, along country highways, and into the twisties. It was comfortable, gave a spirited ride, looked and sounded bad-ass, and it hit its design purpose on the head. But Bobbers just aren’t for me. I still commended Triumph with what they did with that bike – and that engine. 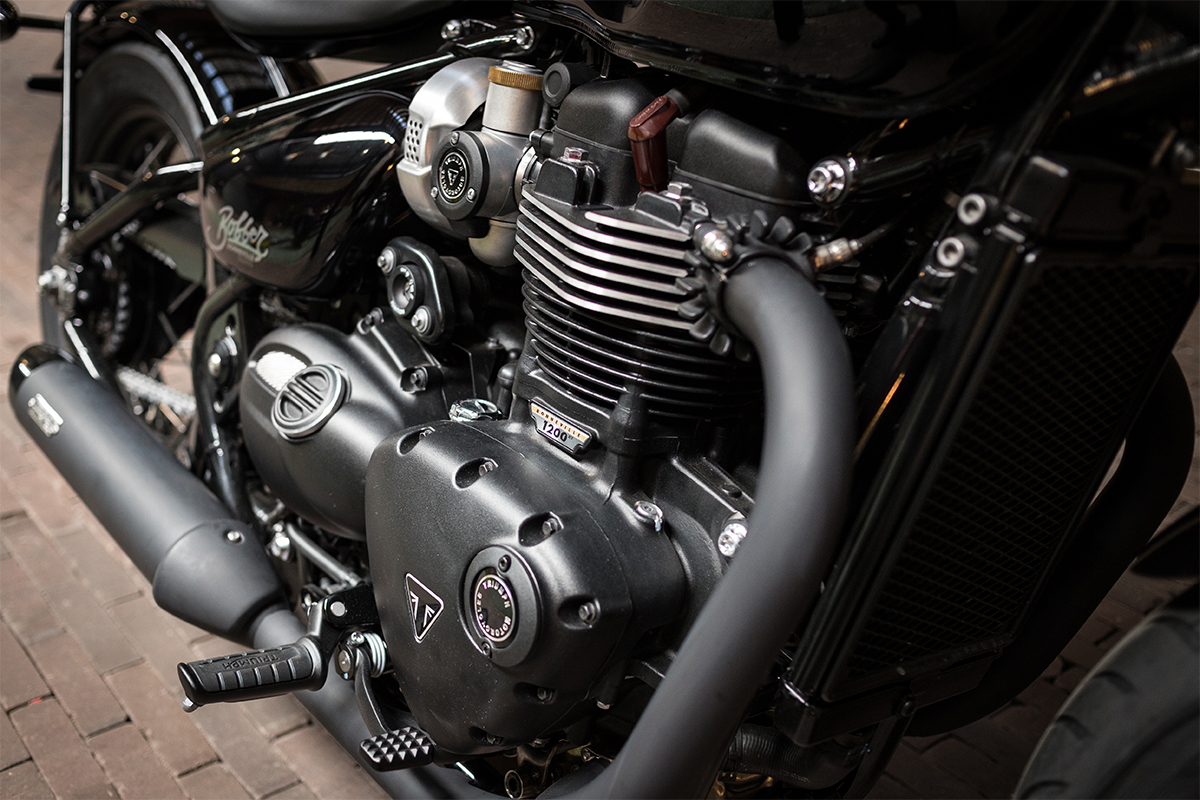 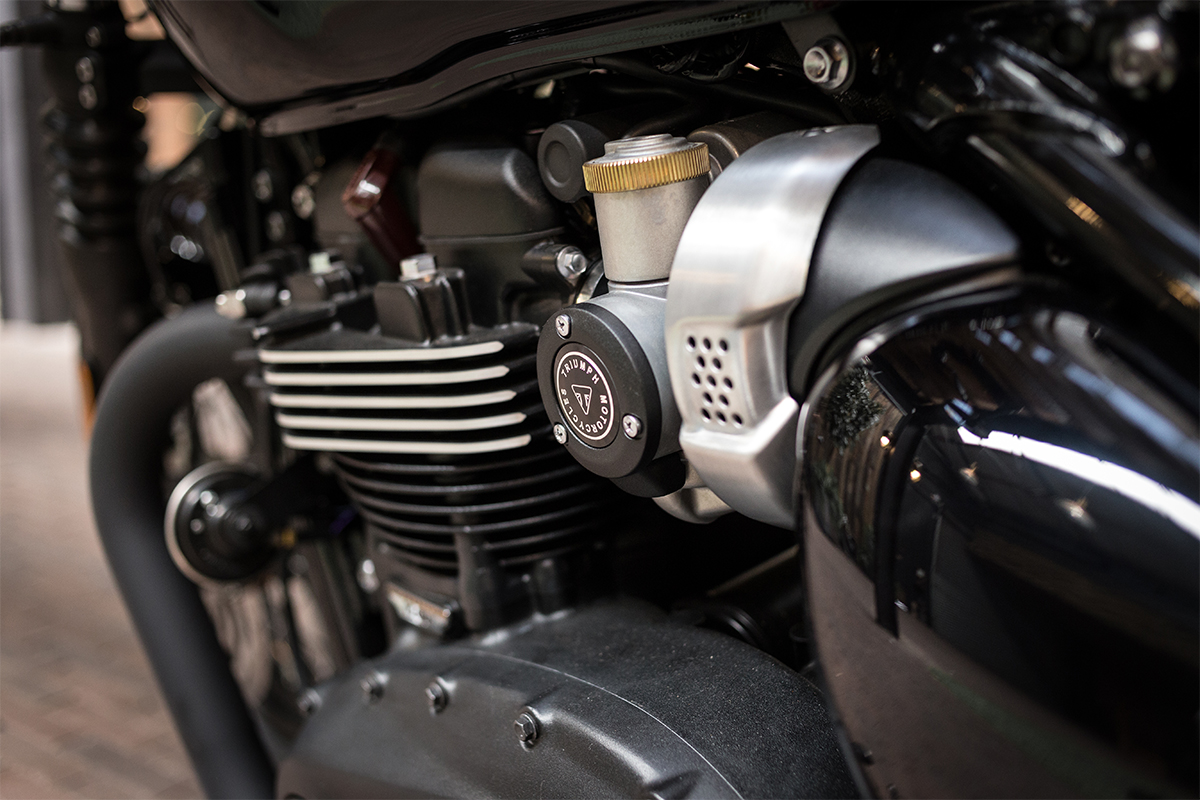 It did have a few downsides tho, most notably in the braking department. It went like the clappers, instant torque when you flicked the throttle and quickly built up speed. But pulling that 228kg (dry) beast up with a single disc and caliper was always going to be a tough ask. You see, the Bobber wanted to go – and it did. It wanted to turn – and it sort of did… Ground clearance was the biggest hurdle. But it really did not want to stop. In fact, when you needed it to stop you would have to allow sufficient time so you could perform the braking evolution without overshooting a corner or ramming it arse up into a tin top. Don’t get me wrong; it was adequate – especially for a Bobber – but its stop didn’t quite match its go.

Fast forward a year and enter stage left the Bobber Black – or as I like to call it, Bobber 2-point-ohhhh.

It’s meaner, more muscular, more imposing, and ‘more blacker’. You can pick any colour of the rainbow that you want, so long as It’s black – Jet Black or Matt Jet Black.

You see, Triumph listened to their customers and they changed a few things – for the better. 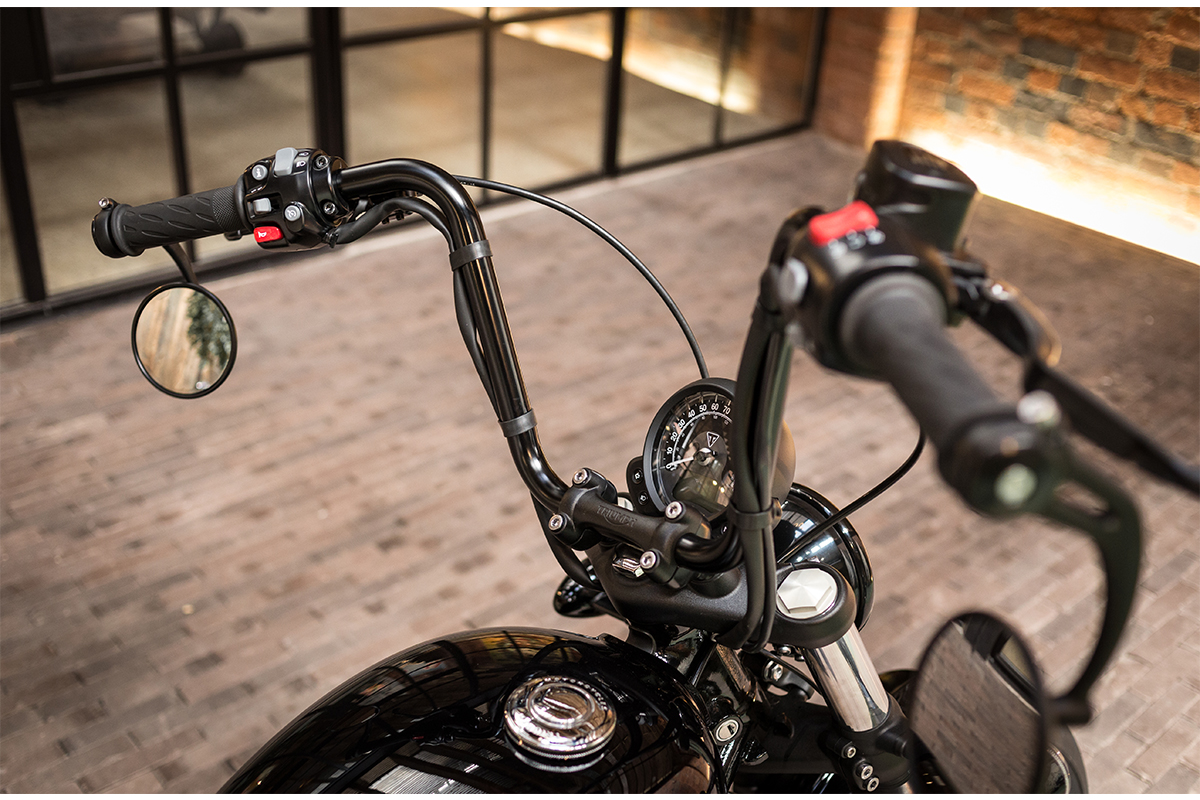 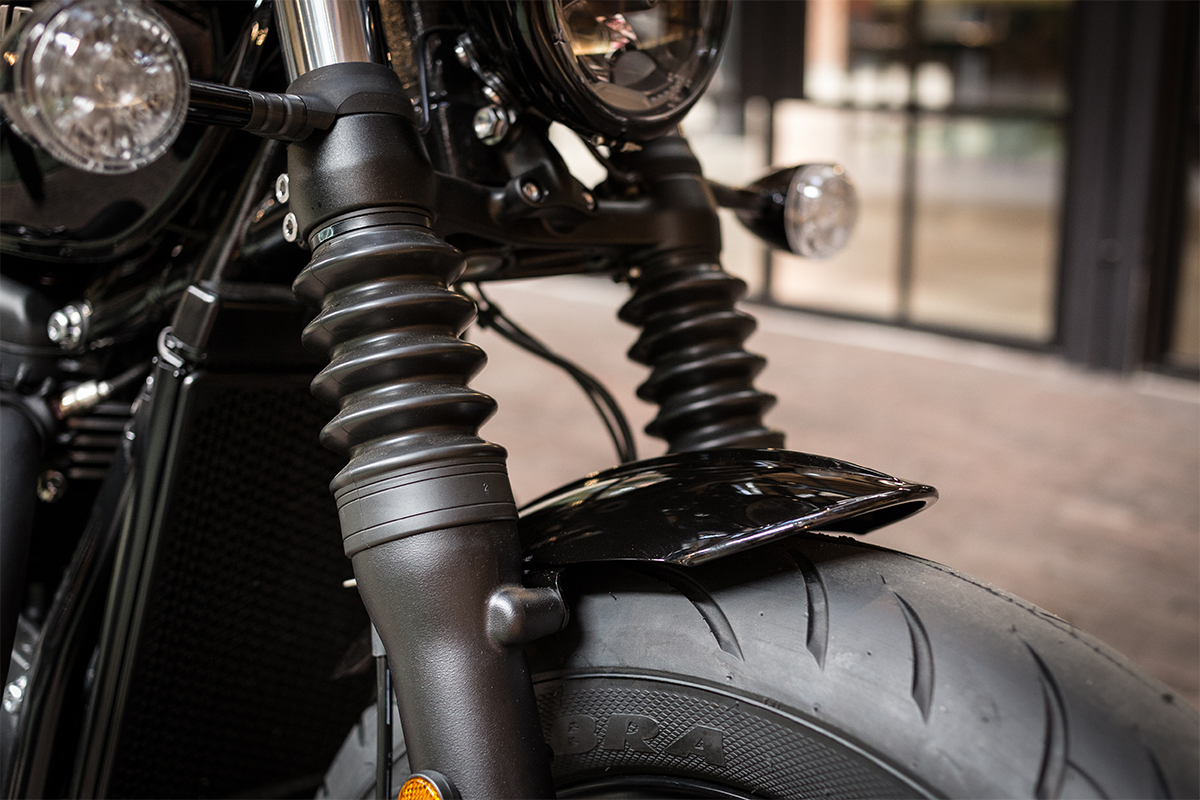 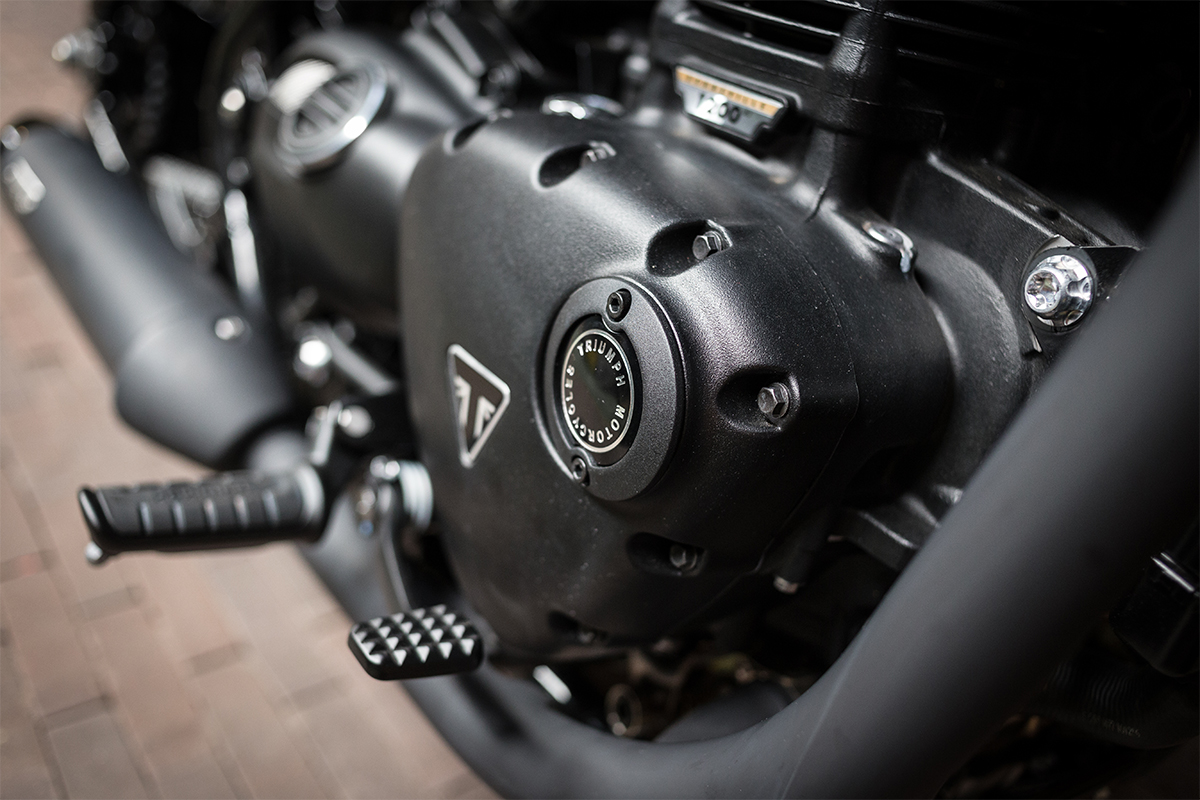 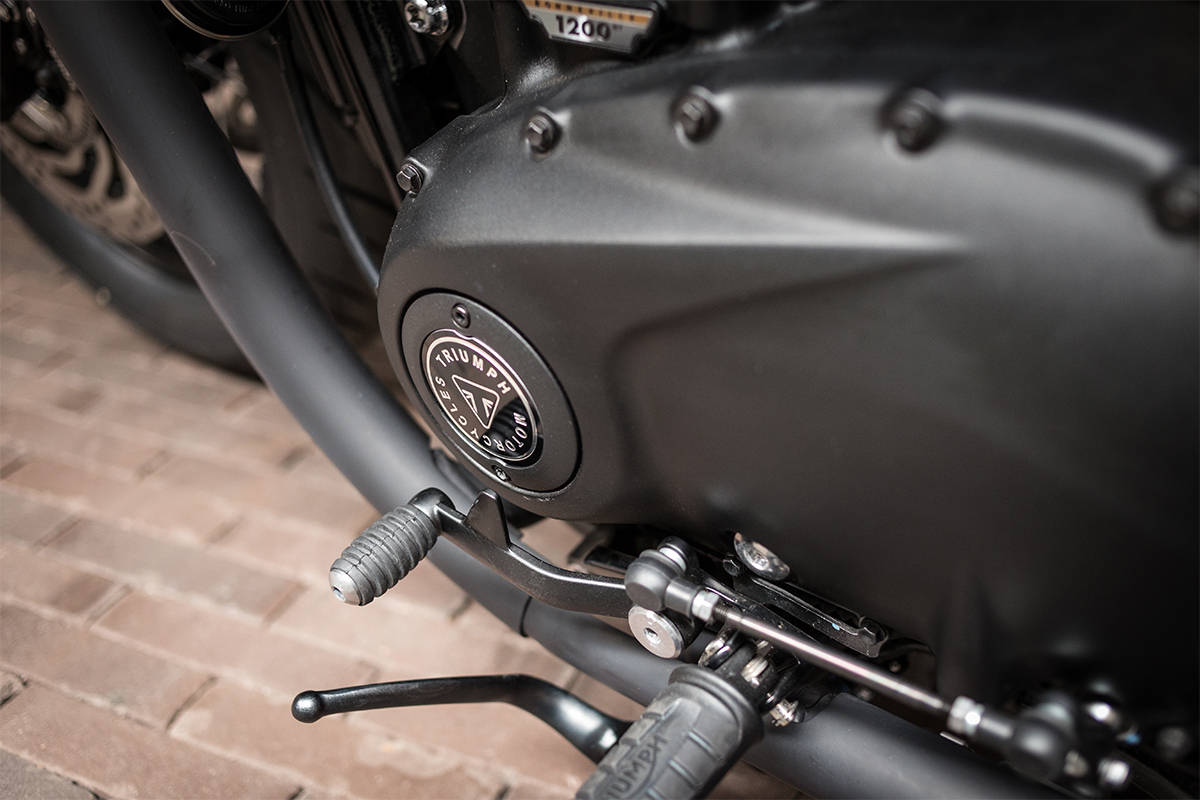 The first big difference you’ll notice is the front end. It’s now chunky, with extra beef. This is a result of new 47mm Showa cartridge forks (up from 41mm KYB forks), a smaller 16” blacked out rim (down from 19”) wearing a 136mm wide high profile tyre (up from 119mm wide), and twin discs each gripped by 2-pot Brembo calipers (up from a single disc with a Nissen caliper) which immensely improved its braking capability.

All up, it not only adds to the Bobber Black’s beefy hunched-forward appearance, but it also helps pull-up the black beast quickly and easily. A light squeeze on the lever with 2 fingers is all that’s needed to quickly pull the reigns in and come to a halt. It’s definitely a good upgrade over the standard model. 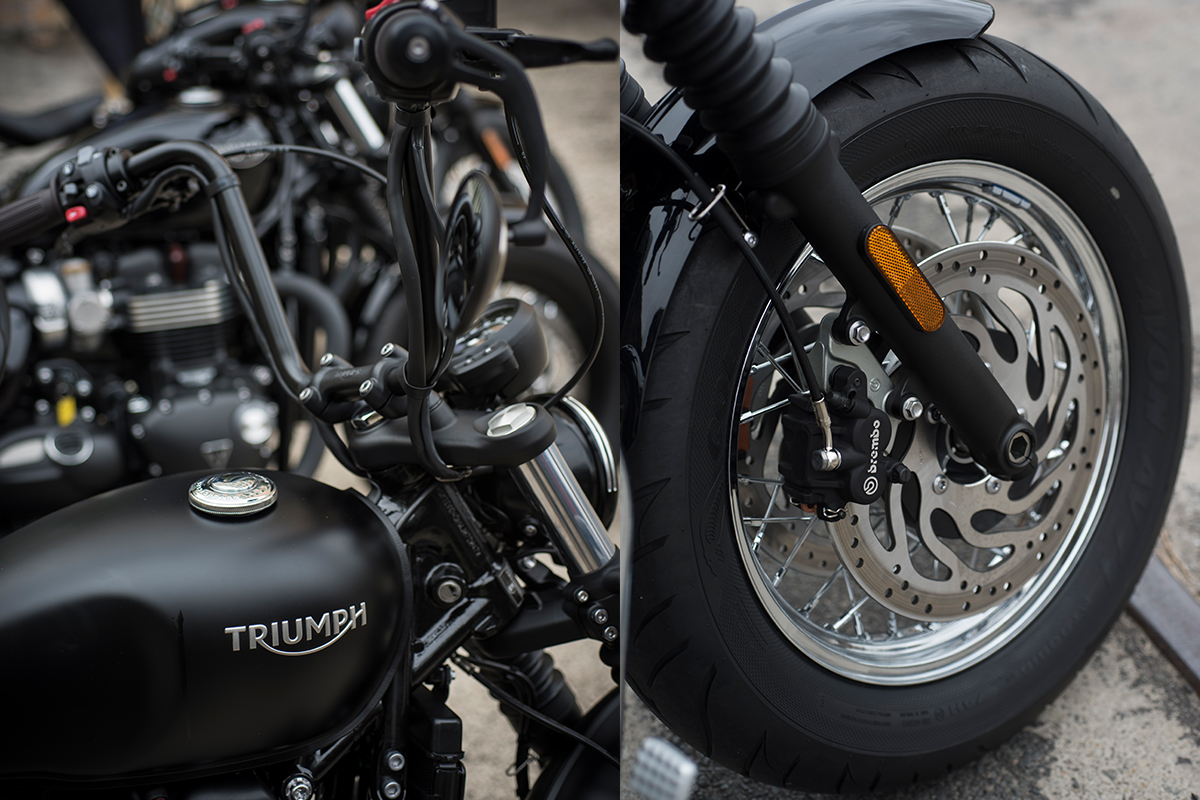 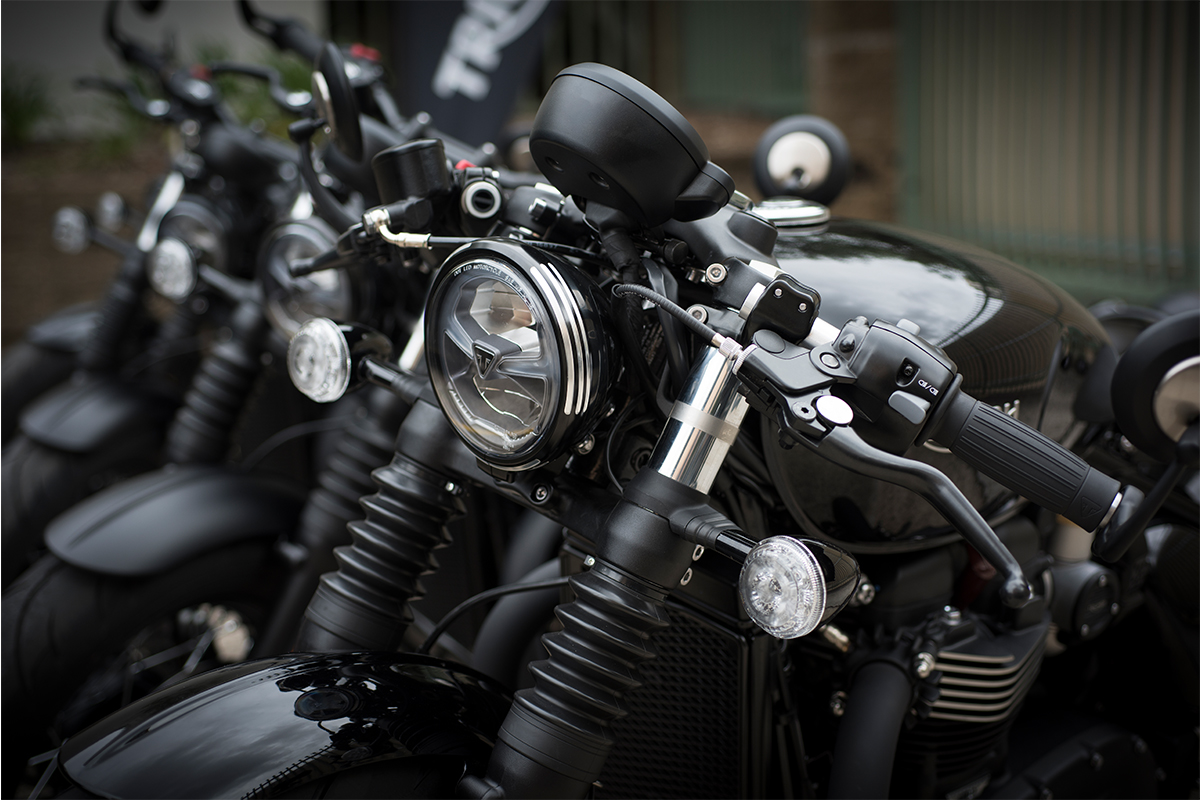 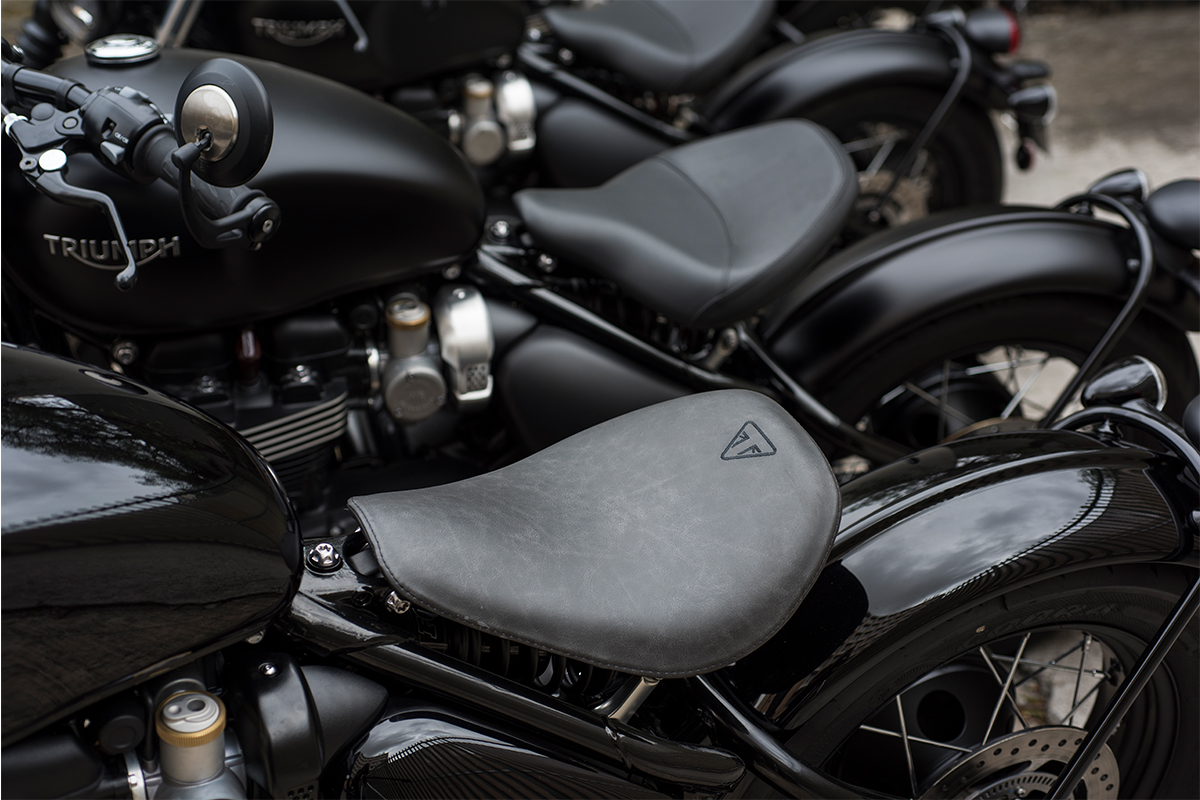 The clutch is the same in regards to ease of use, it’s torque-assisted, and only requires a light squeeze with a couple of fingers in order to swap cogs. Wanna race? Turn off Traction Control, make sure it’s in Road mode, apply revs, dump the clutch and hold on. It’s so easy with that clutch. In fact, this is exactly what Triumph encouraged us to do with the Bobber Black by sending us out to Eastern Creek Dragway in Western Sydney. They say the bike is at home in a straight line with power applied, and I couldn’t agree more. 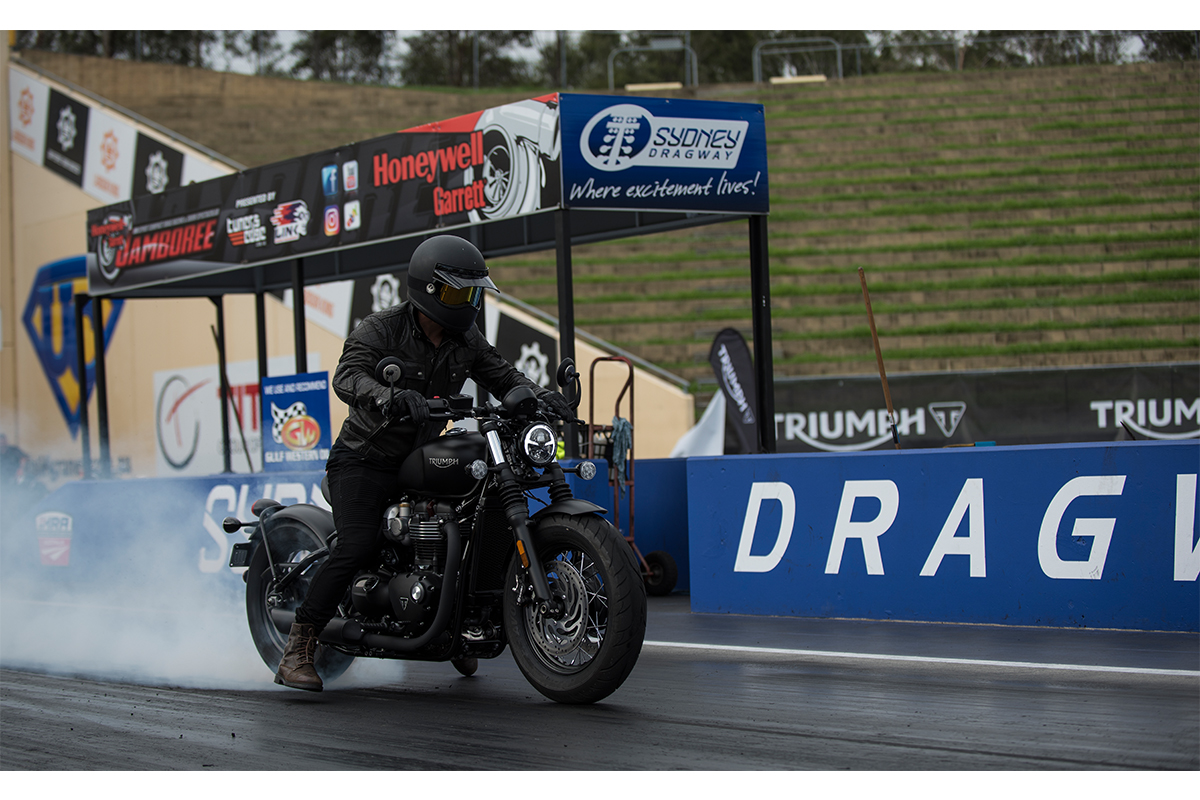 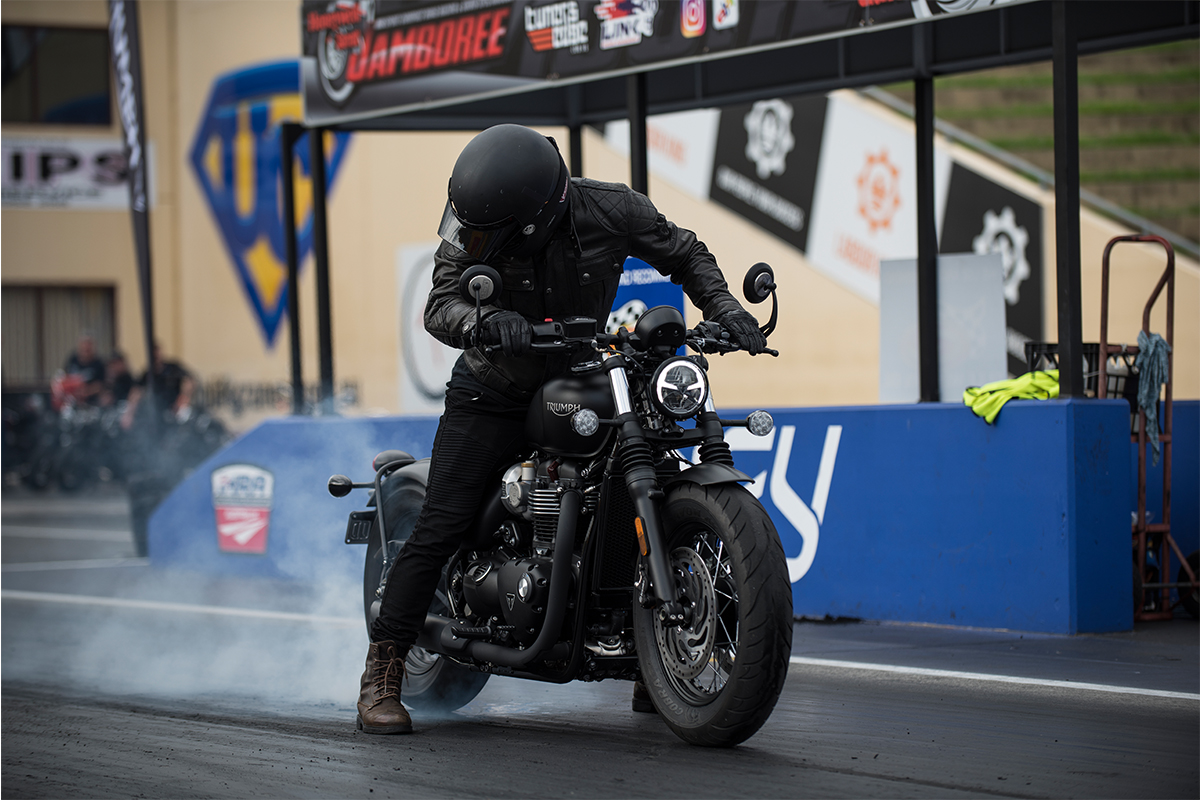 After our safety brief, a photoshoot and a couple of practice runs we then went into a knock out competition. This started off all shits and giggles until we were told some prizes were on the line and then all hell and rear tyres broke loose.

I eased through my first round but unfortunately got done by an ex Australian Superbike racer in the second. I had the jump but he rode around me when it mattered.

In the end, it was he who got the quickest time of the day down the quarter mile with a 12.3 second run @ 168 km/h. And it was Charley Boorman who took out the competition by knocking everyone out. Well-done, Mr Celebrity-Who-Can-Actually-Ride! 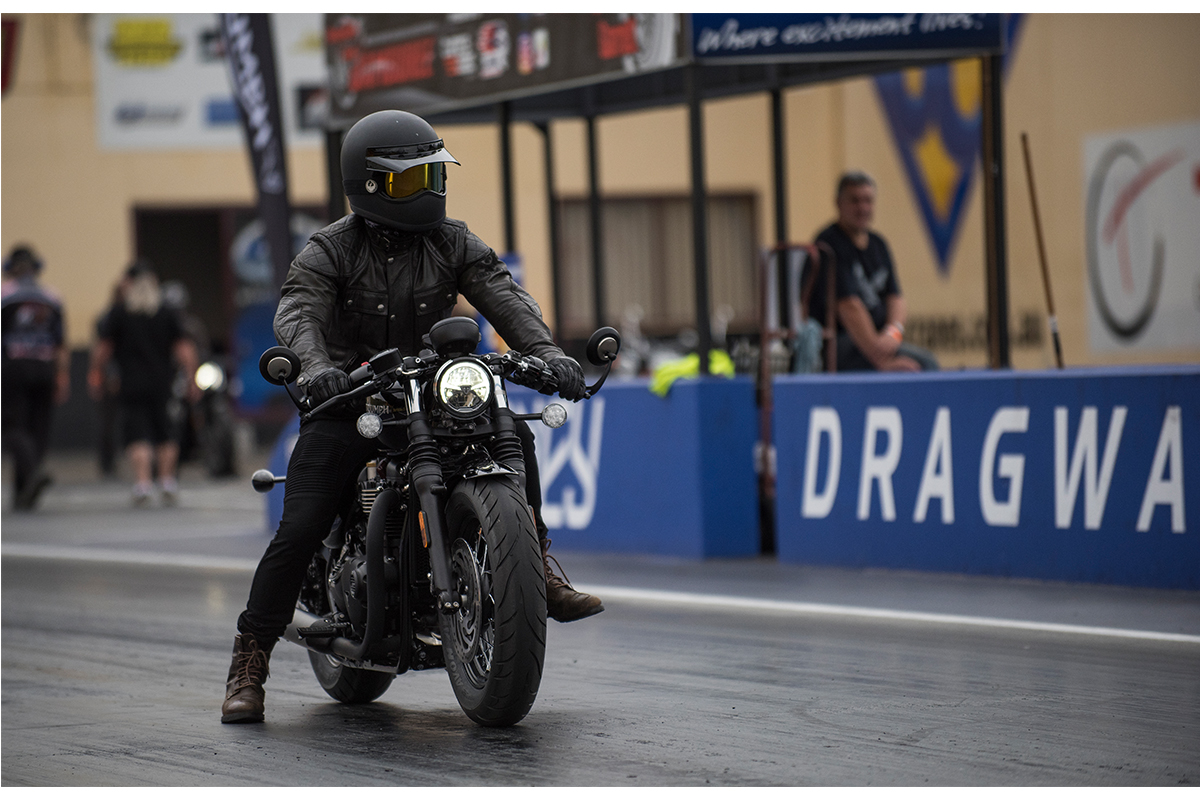 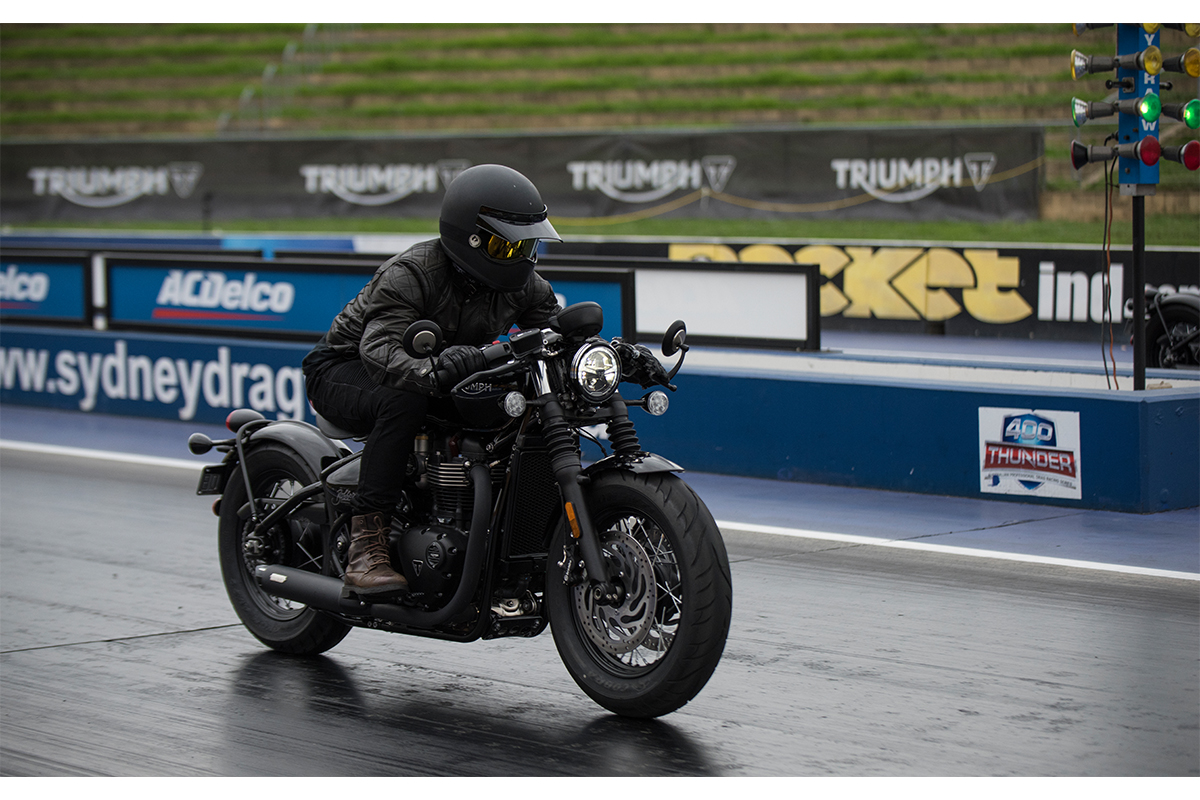 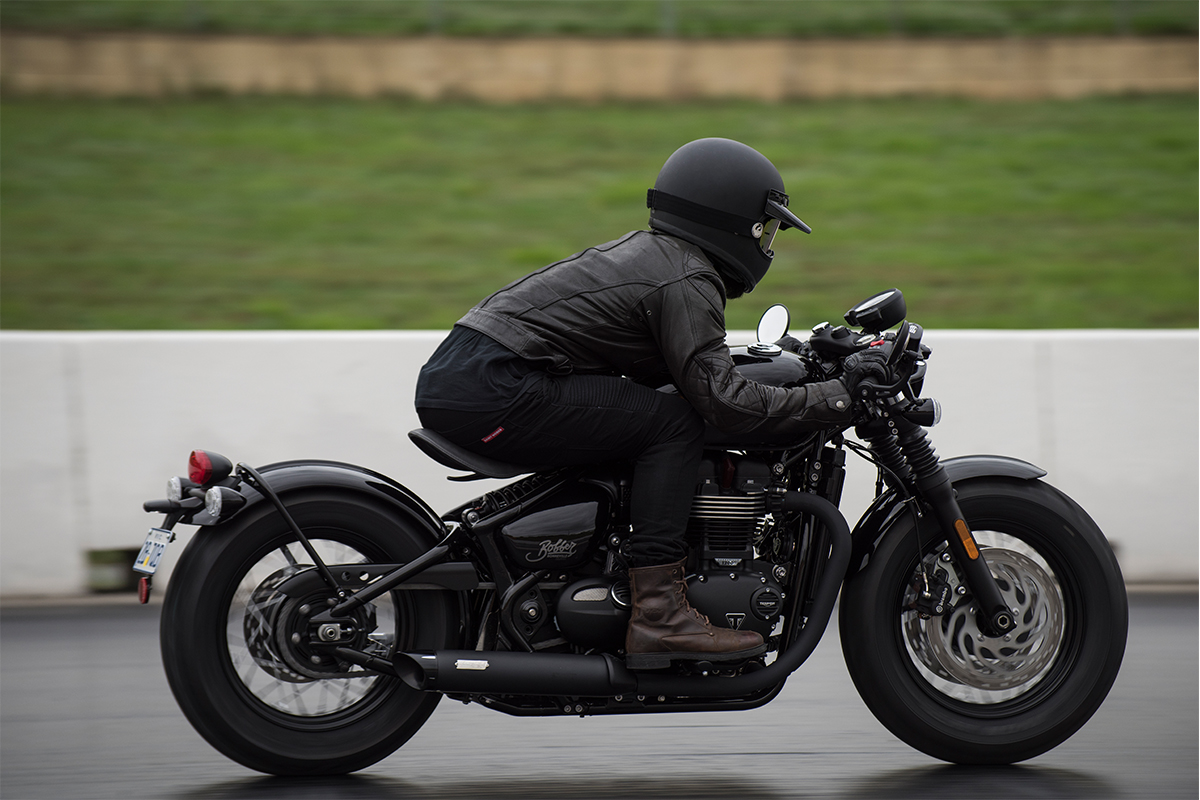 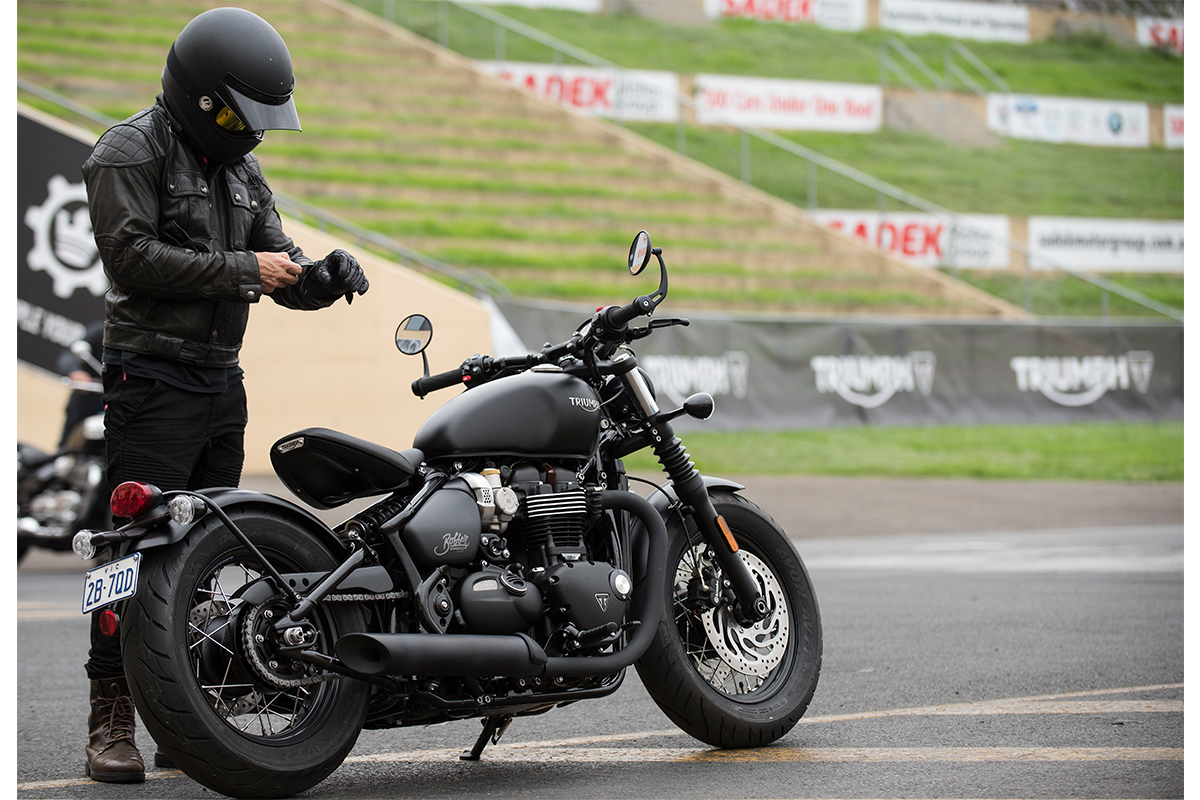 After our half day at the drag strip, we headed south to the Royal Nasho to test the Bobber Black through some twisties.

Triumph supplied the Bobber Black in a few variations, one with the Quarter Mile kit which included clip on bars, upgraded Fox mono-shock suspension (rebound adjustability only) and Vance & Hines silencers. And another with the Old School inspiration kit, which included a brown leather seat and Ape Hanger style bars – among other additions.

For me I love the look of the clip-on’s as it’s more my riding style, so I found myself on the Quarter Mile more often than not. It also helped that the other blokes on the ride liked having a photoshoot or a short squirt with the clip-on’s, but didn’t want it for too long. It does get to your lower back a bit with the foot position. The seat is still adjustable back and down or up and forward. I left it as it was (up and forward I believe), and the riding triangle just never quite felt right with the clip-on’s. It definitely wasn’t as comfortable as the stock Bobber Black with its low rise straight bars on the highway, which was a bit more of an upright position and very ergonomic. Like the original Bobber, the bike will still send a jolt up your back if you hit a decent bump. Even on the Fox equipped bike, the hard bumps were still felt on the factory setting. Playing around with the Fox’s one and only adjustment (rebound) may help with this, but I didn’t get around to fiddling with this. All up though the stock mono-shock does an OK job.

Once in the twisties, the Quarter Mile felt more at home with its forward weight bias, and it was here that it was the red hot favourite Bobber Black again amongst the boy racers. Sometimes it pays to be selfish. 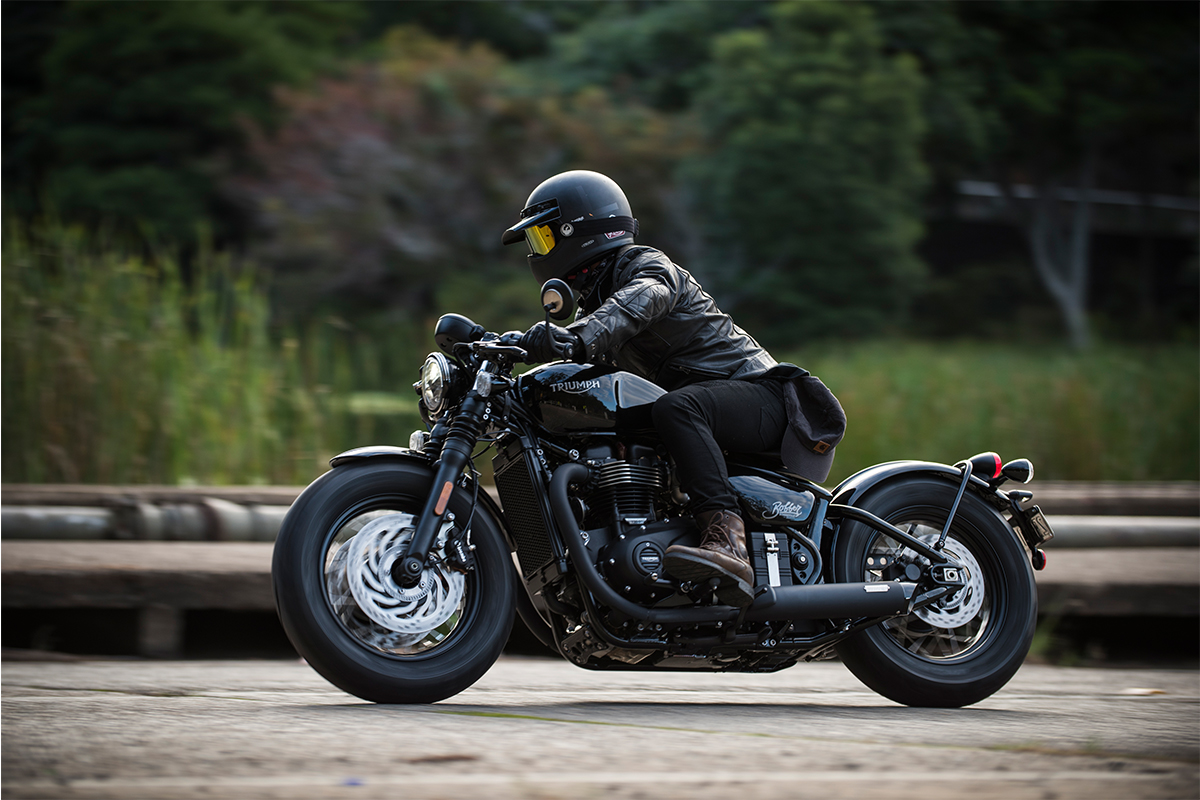 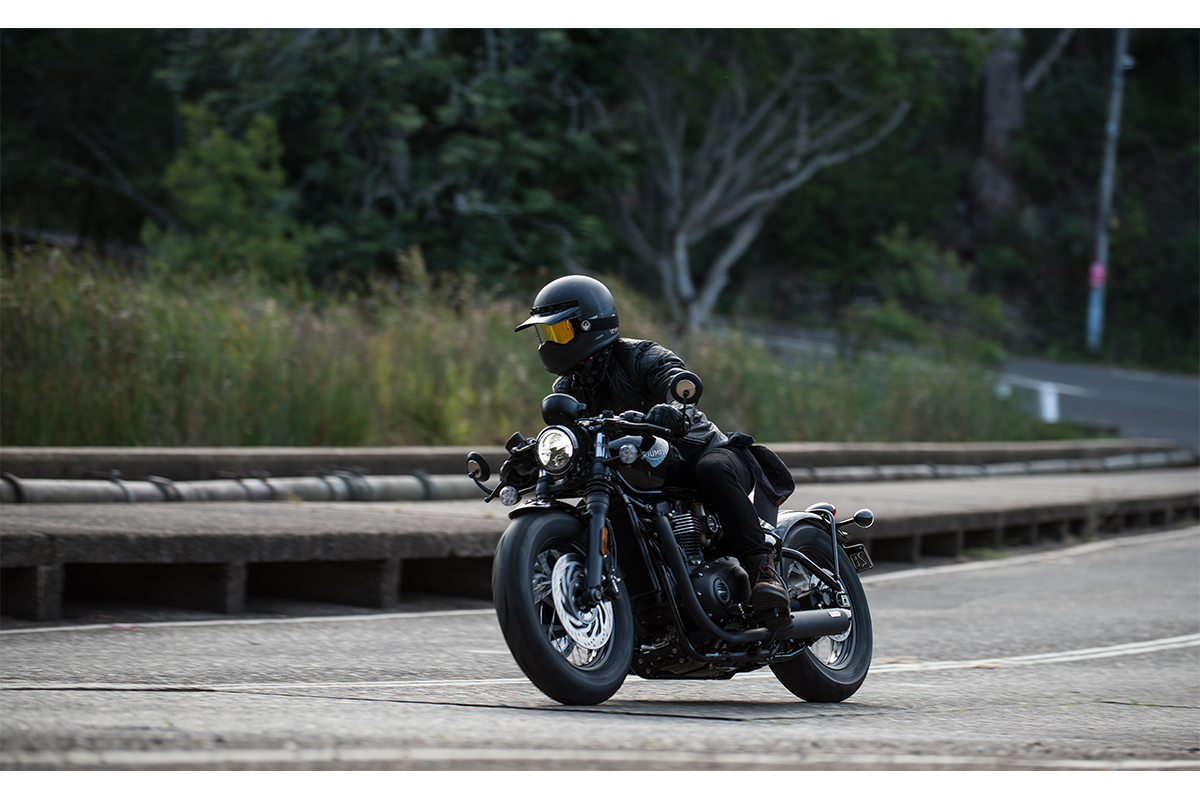 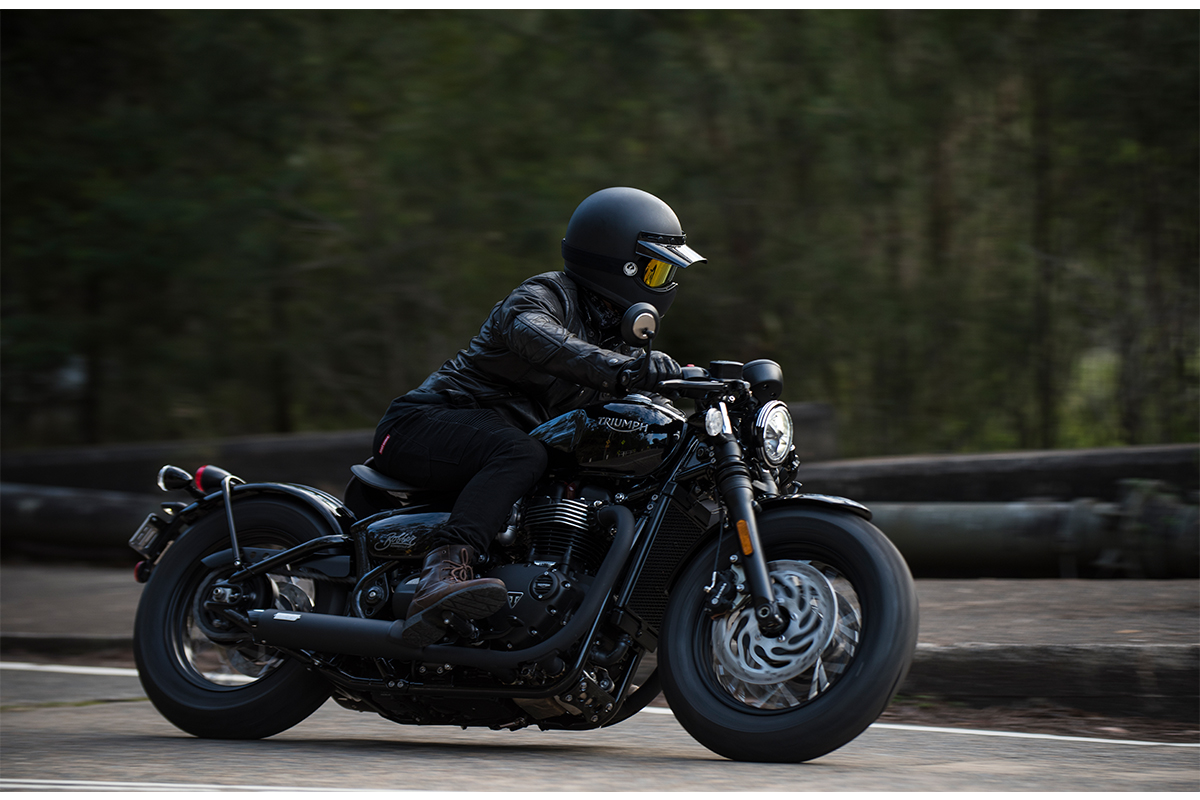 Performance wise, the Bobber Black is the same HT 1200cc engine that’s found in the Bonneville T120 but with its own unique tune. What this ‘unique tune’ statistically translates to is 10% more torque and horsepower than the T120 at 4,500 rpm. The Bobber Black does have 2% more torque overall (106Nm) but lacks about 2% in neddies in total (77PS). What this means in real-world speak is the Bobber Black, like the original, is a low-down grunt monster that doesn’t need high revs, and loves traffic light drag racing. And this all comes down to a change of exhausts from the T120’s.

What this also means in day-to-day riding, whether in the twisties or in high-speed sweepers, is you just simply leave it in a gear, wipe off a little speed using two fingers or a right foot (the rear brake is quite sufficient), turn until you hear those hero knobs screech (oh it happened a lot), hit the apex, apply a fist full of throttle, listen to that glorious 270 degree offbeat thump reverberate all around, grin like a little school boy and repeat.

Coming in at an extra 9.5 kilos over the original Bobber with 100% of that forward of the head stem, you can feel the difference in the unsprung weight department at the front when turning. It’s not difficult to turn, but it is noticed. The overall diameter of the wheel and tyre is the same as the original, but the extra weight, bigger forks and gyroscopic forces of the twin discs does add to the weighted effect. It’s certainly not a deal breaker – especially once you consider the beef it now brings. 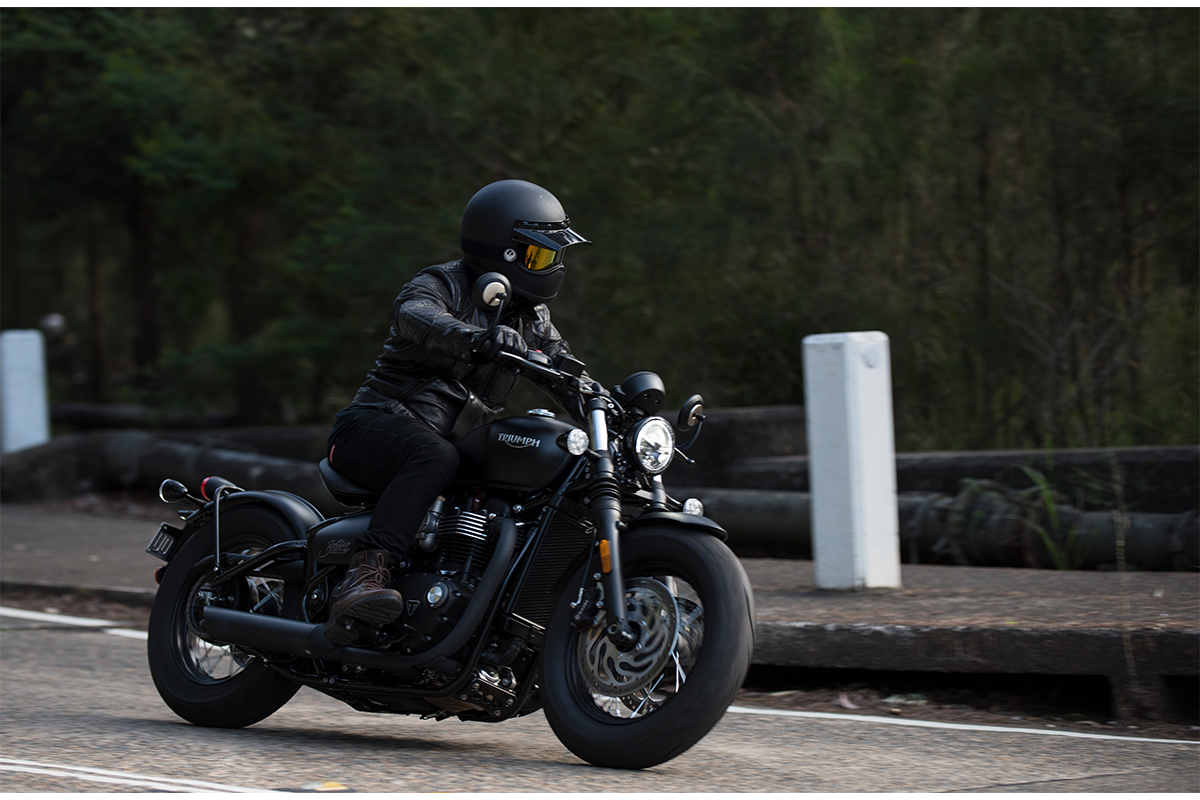 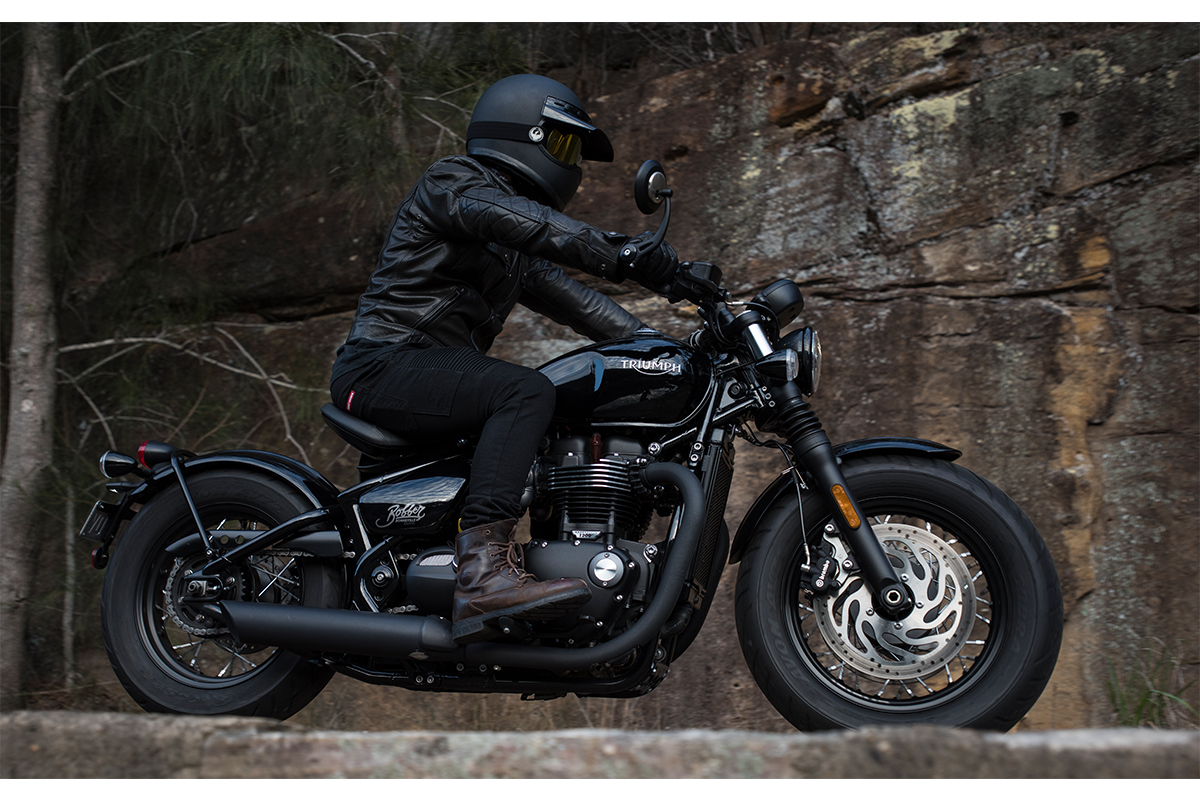 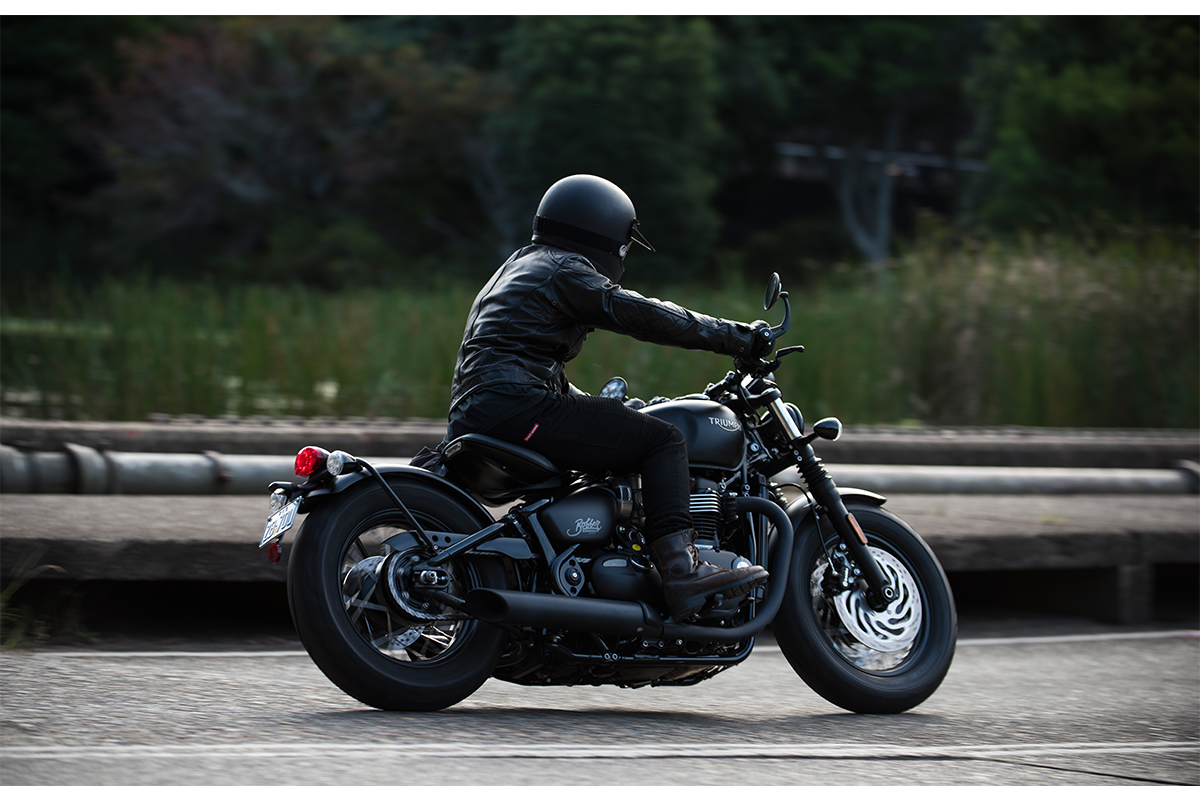 In fact, the Bobber Black is a mega fun bike to ride. It has oodles of torque and plenty of power. It now stops as good as it goes, and with or without the V&H pipes it sounds aggressive and deep. Throw in a heap of black stuff on the bike and you’ve got one seriously aggressive looking, blacked out hot rod of a bike – exactly what Triumph were aiming for.

From a custom bike tinkerer’s perspective, what else could be done or changed to the Bobber Black? It would all be cosmetic, really. Besides the usual shorter front and rear fender, smaller indicators and maybe a custom paint or wrap job, I’d look at putting a wider rear tyre on the back to give the rear end a bit of a beefy look too. But squeezing a wider rim and tyre inside that caged swing arm would prove pretty difficult. Normally, a headlight would be one of the first things I’d change on a bike to give it its own character – it’s own eyeball, so to speak – but the 5 inch LED DRL on this bike is a thing of beauty and I absolutely love it and wouldn’t change it for anything else. 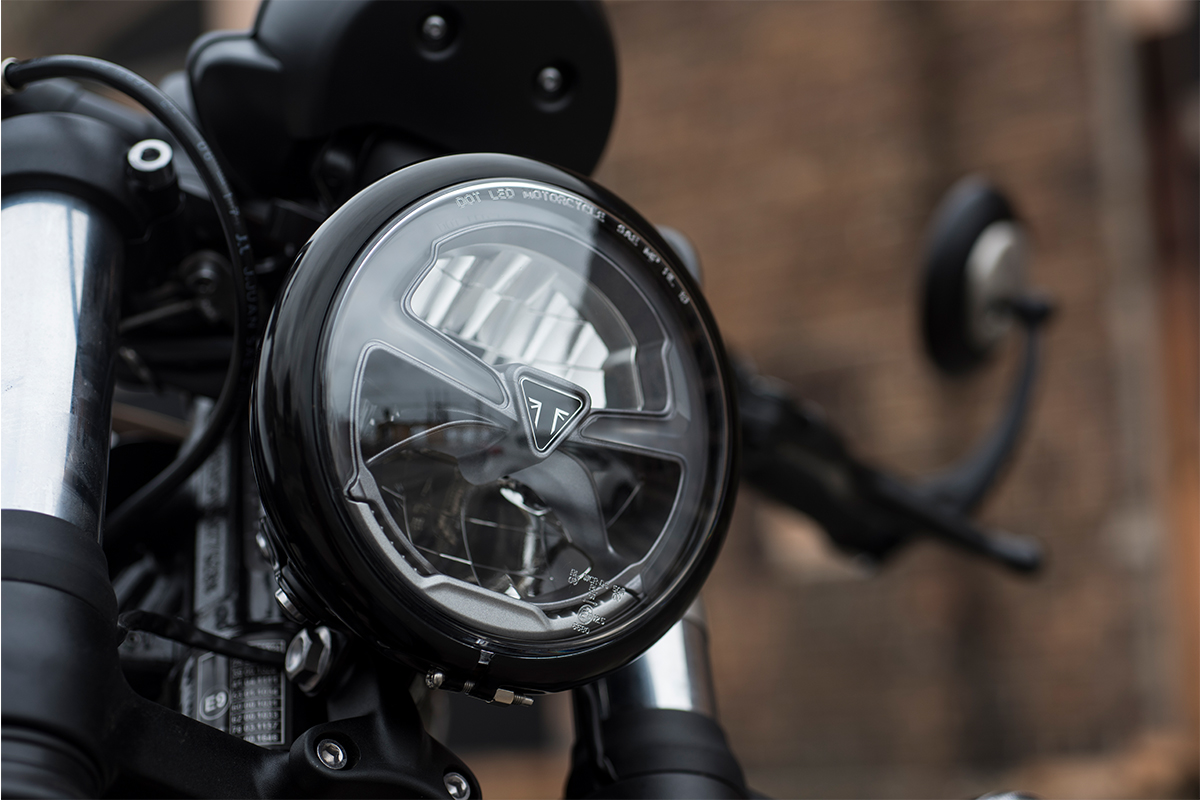 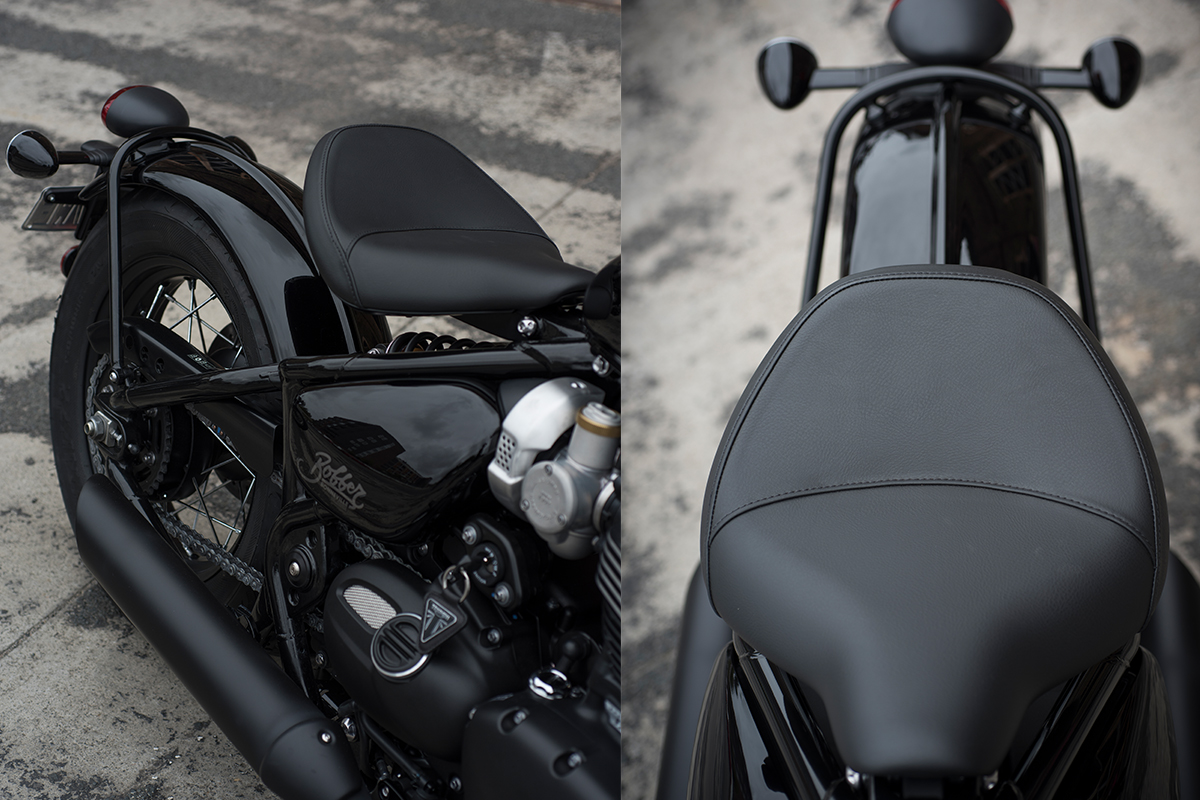 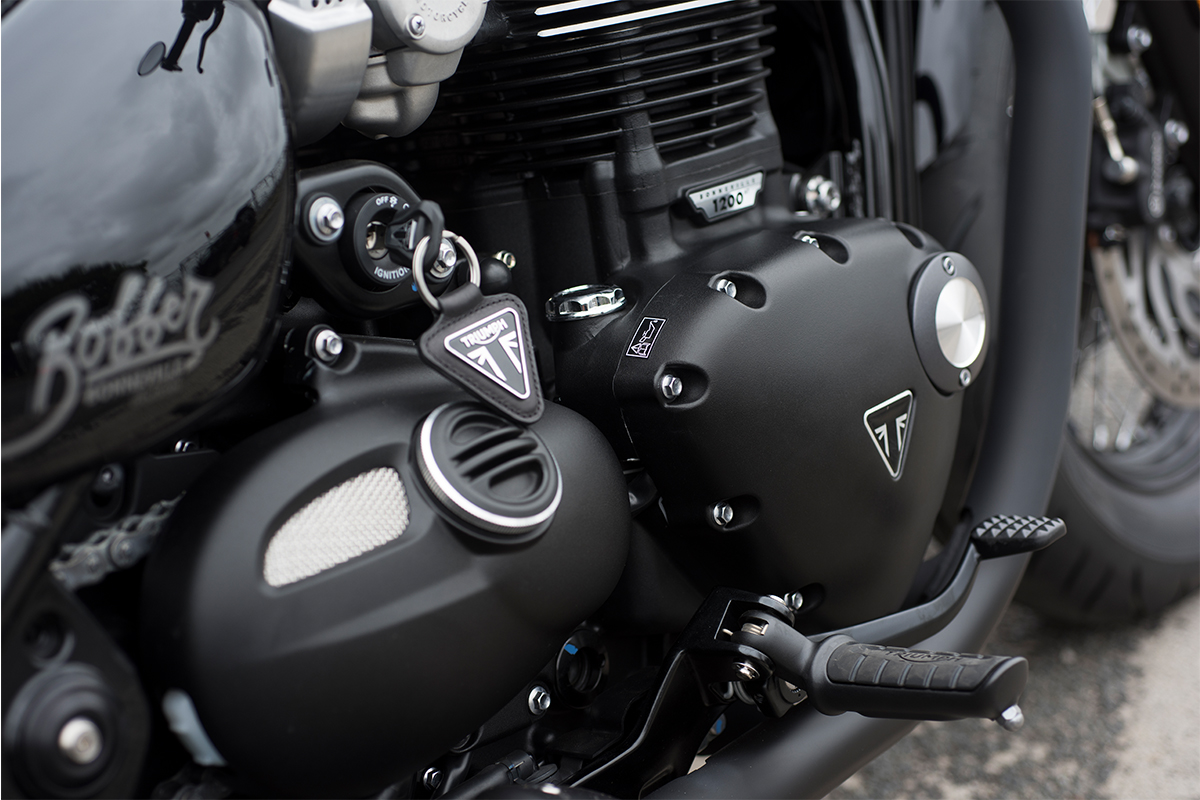 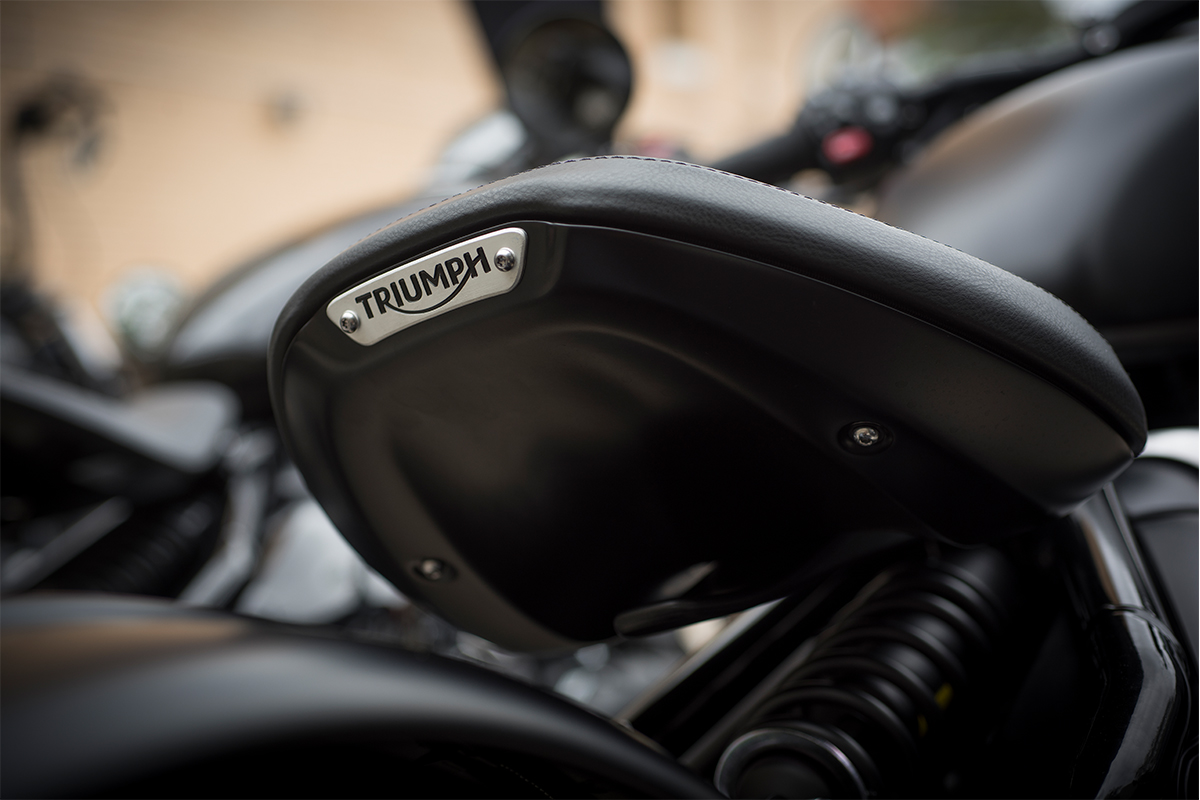 It goes to show that Triumph have done an exceptional job with this bike straight off the showroom floor.

Stay tuned for the next blog where I tackle the Bobber Black’s less bobbed (and less black) brother, the Speedmaster.