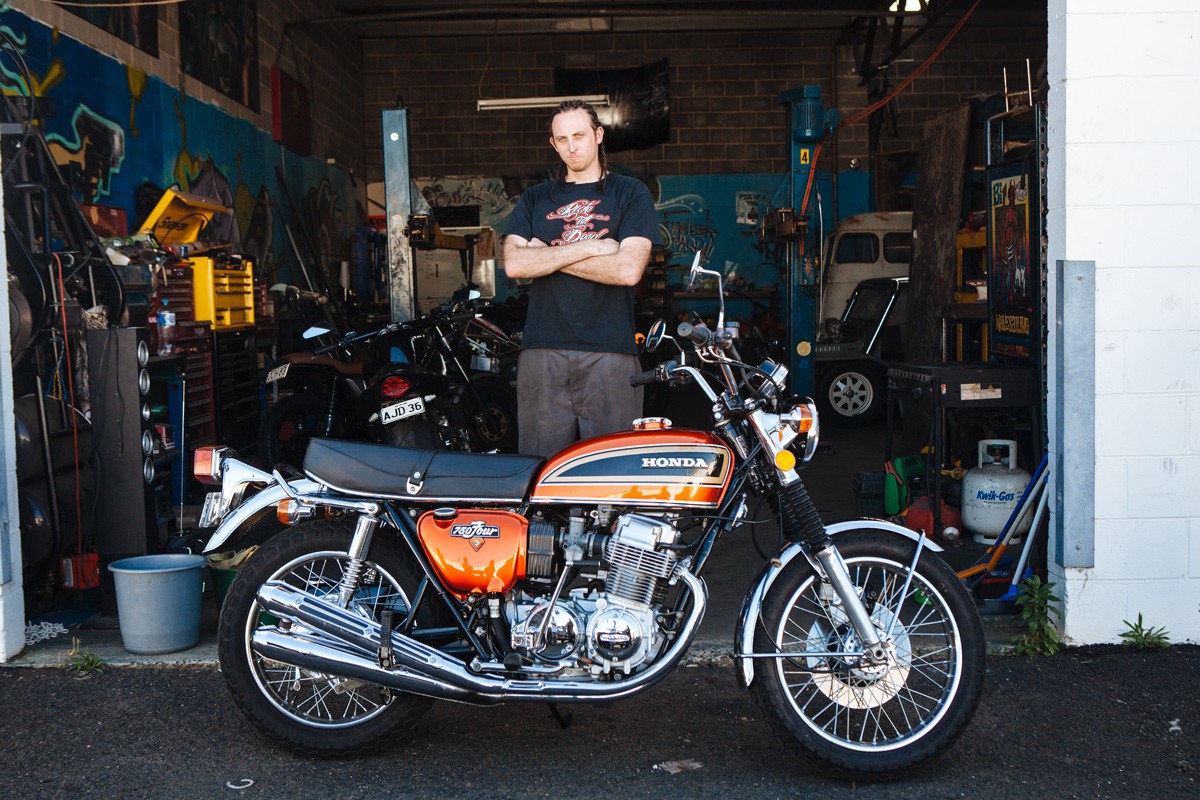 Tucked away behind some road works up on the central coast sits 315 Speed shop, where you’ll find a bit of anything and bloke that’s done a bit of everything.

Kenny has had a history riding and building a huge variety of bikes – everything from flat track to choppers and café racers. “I started racing flat track when I was 10 and grew up racing speedway and long track. I’m still racing, though not as competitive after a few broken knees but I still love it. I always did all the race prep on the bikes; with the help of Peter Campbell from Goulburn we made down pipes and put the bikes on methanol. I did all my own head and cylinder work.” 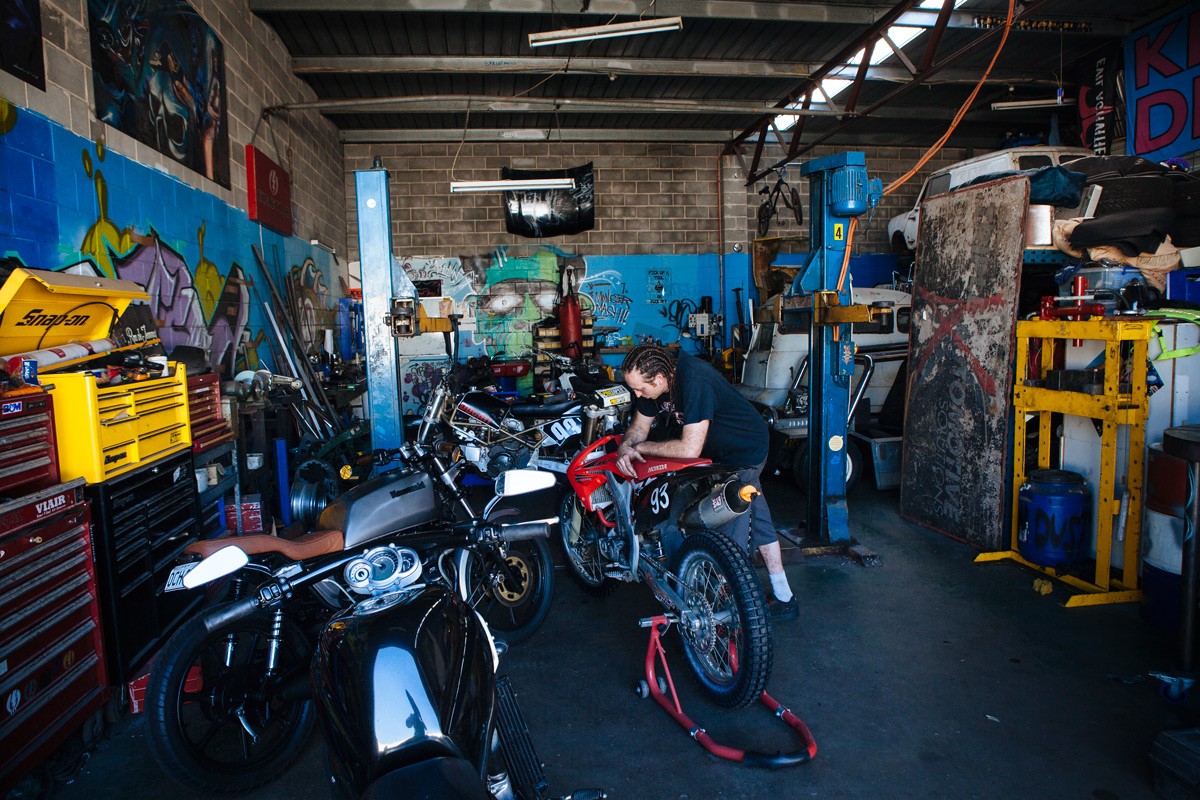 Kenny’s life in the bike world was no accident, having a father who was passionately into bikes and riding. “I grew up with his old race bike in my bedroom, and all his bikes in the shed – including the orange CB750 Four that he bought brand new and rode from Sydney to England to see his Mum on.” This CB750 is one of the rare old bikes you’ll find that is immaculate, but hasn’t been sitting in a shed or never ridden. It’s gone from Sydney to Melbourne, missed the boat so Kenny’s father rode the bike to Perth to catch up with the seaward vessel.

Well used, and well looked after. Just what a bike deserves. 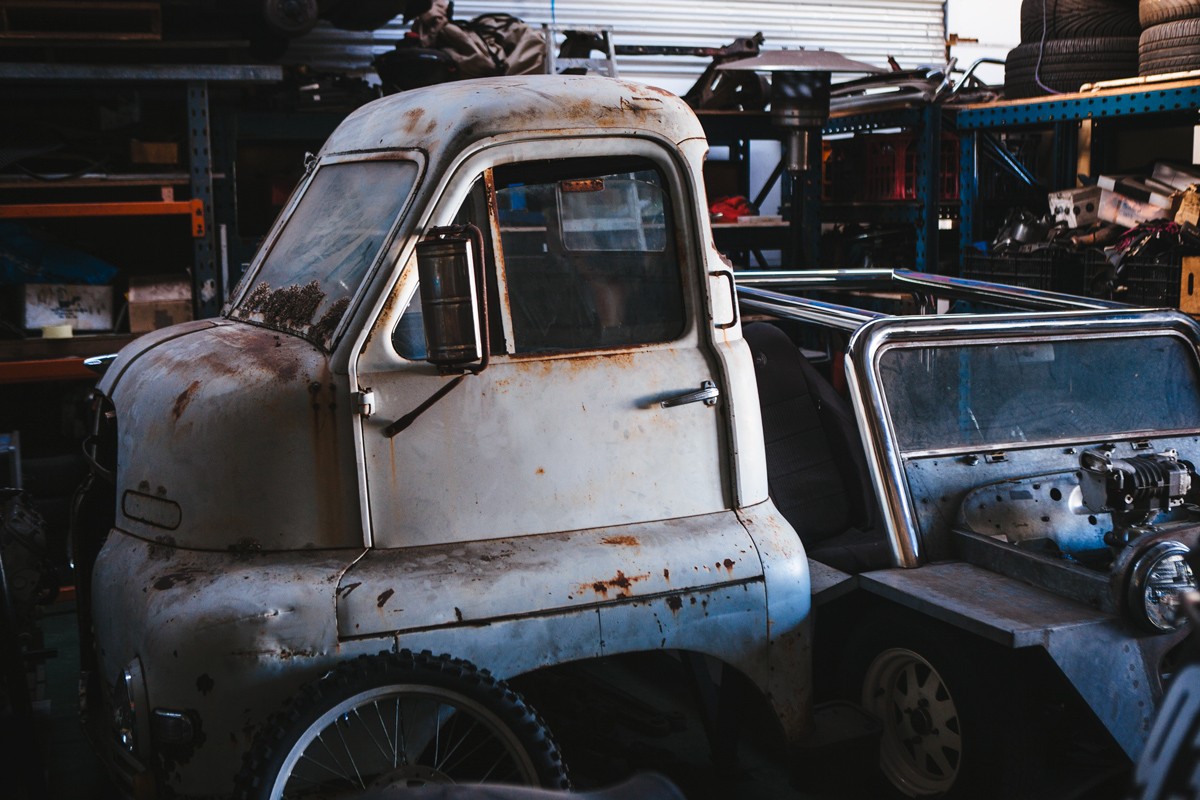 There’s an interesting ride sitting in 315 Speed Shop, a Ducati Monster 600 that has been converted into something that suits Kenny’s needs a bit more.

“The Ducati tracker got started at Peter Campbell’s shop, I did the testing and modifying last year to get it to handle properly. It took a while to get it to steer like a dirt bike and not a roady but I got there. I changed the front and rear suspension a few times, made some pro tapers fit, and moved the foot pegs around a lot. Now that I’ve got it to handle the way I like I’m going to pull down the stock 600cc Engine and build up a 900cc for it. 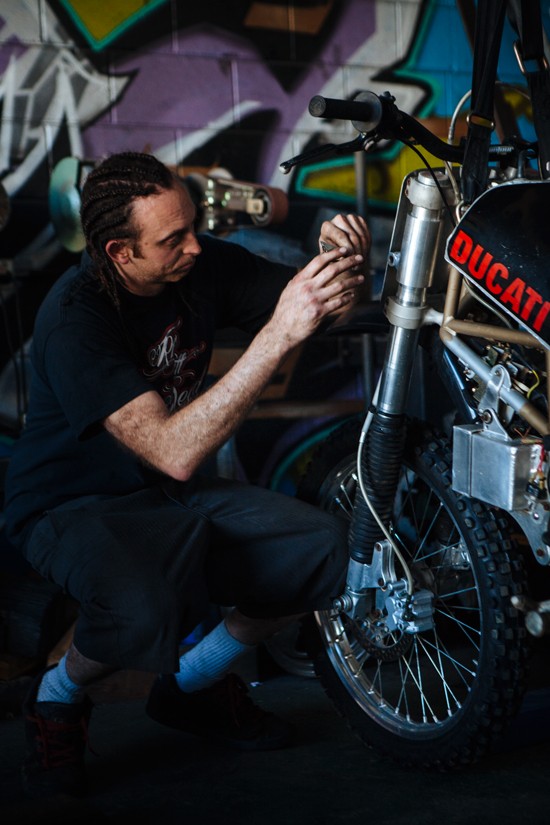 Unfortunately, ‘the powers that be’ canned the v-twin flat track class for now but hopefully by the time I build the hot rod engine for it next year they will bring it back.”

Kenny’s got a big history with Choppers as well, having worked at The Chopper Shop building custom choppers – “mainly big rear wheel raked out Harley stuff. I did all the machining and assembly, and then the jobs at The Chop Shop got more into the bobber style race and drag bikes.

I started building metric bobbers and cafe racers out of my own place a few years ago. I do mainly race style stuff – performance engines, bikes that go fast and not just look fast! A lot of jap muscle bikes, Honda Boldore and Kawasaki Z’s. This year the Harley’s have gotten popular, so I’ve been working on them again.”

Kenny rides with the Ride Till Dead crew, who are all about chucking the bikes up on one wheel. Check them out here -@ridetilldeadofficial and you can follow Kenny here @kenny_g_rtd 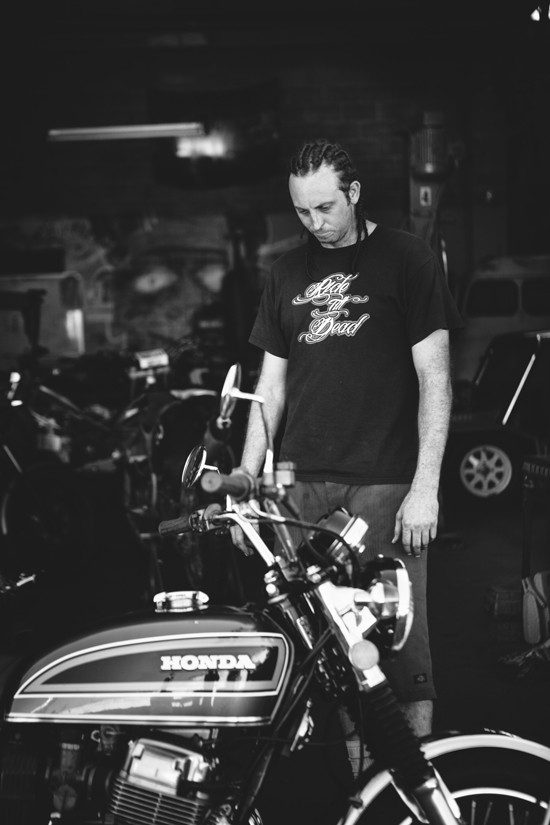 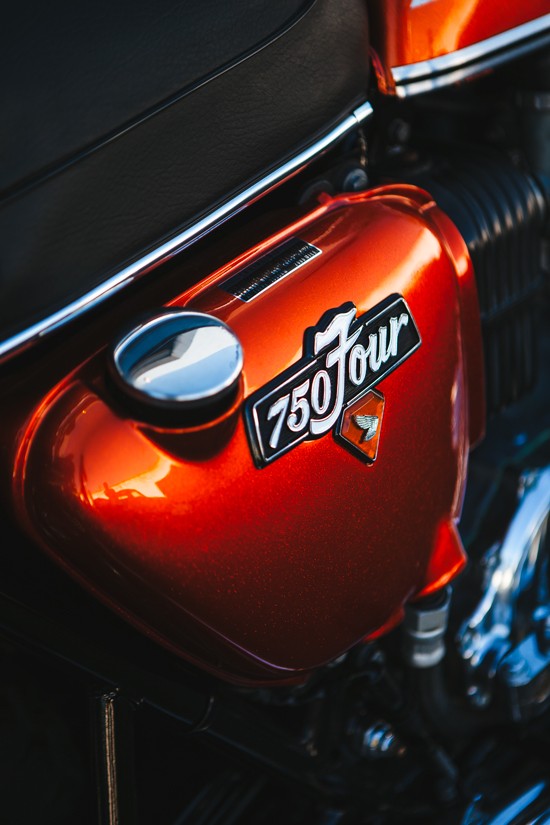 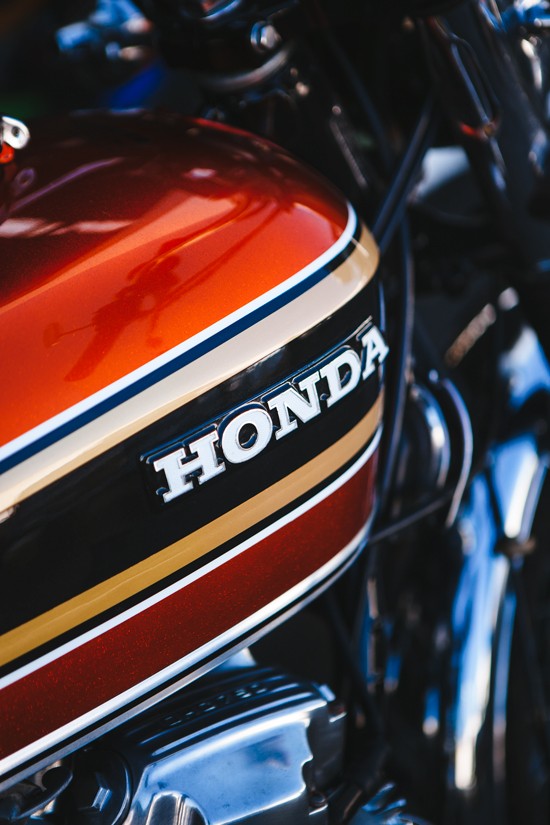 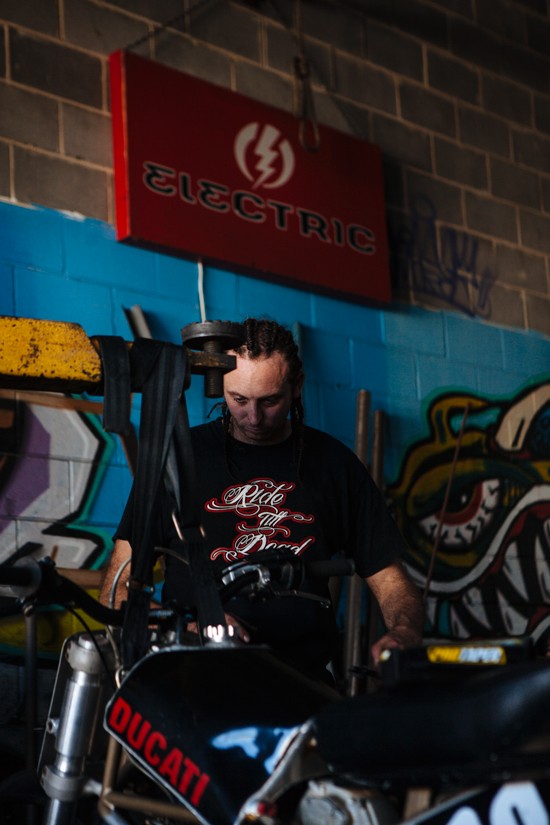 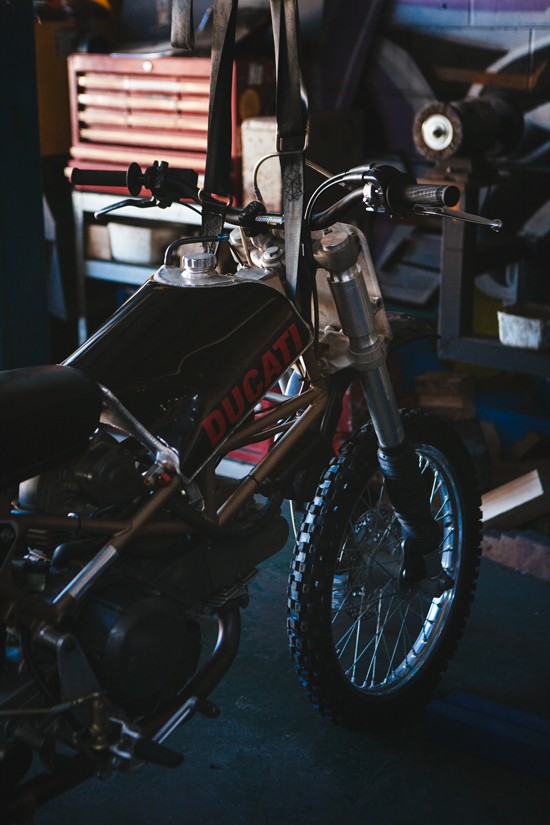 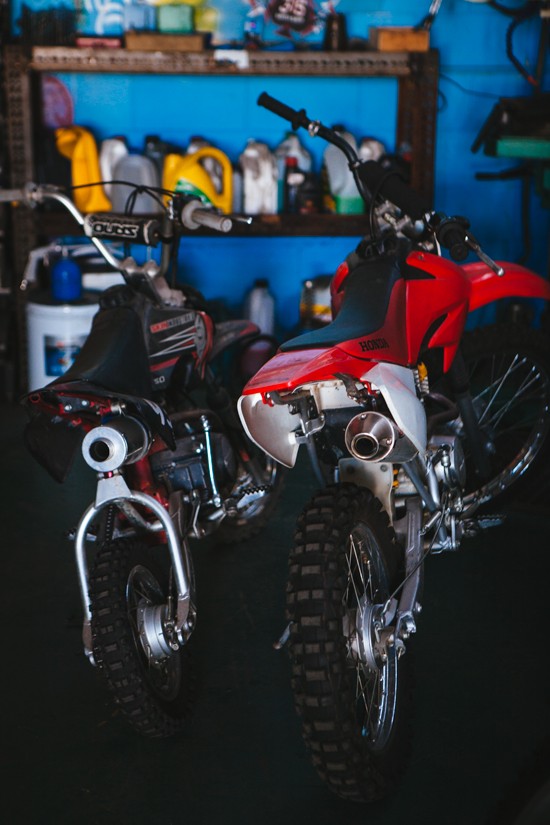 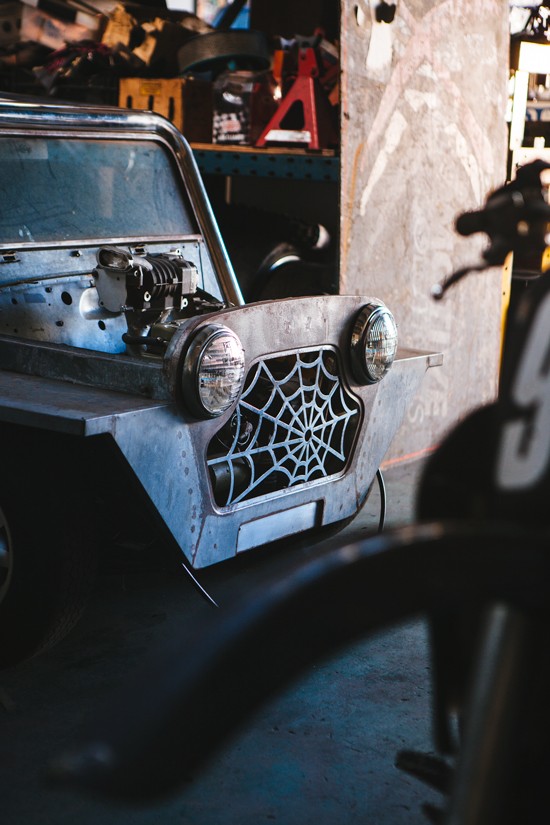 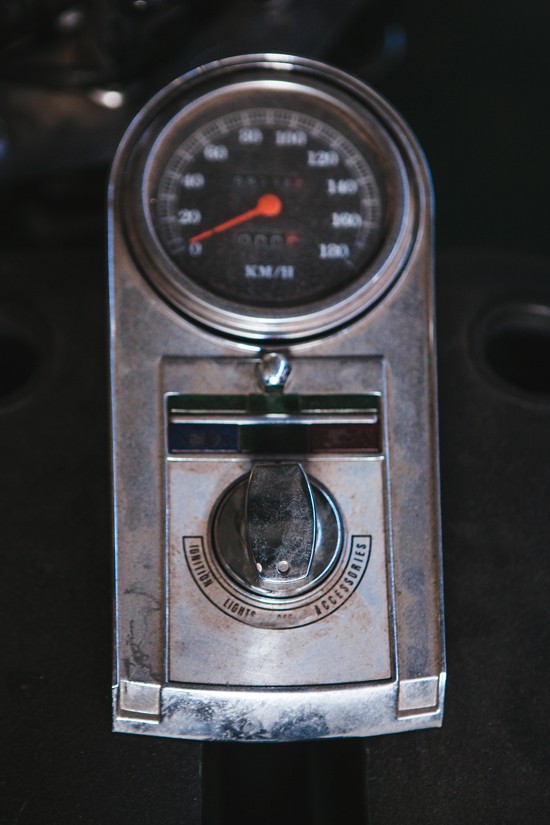 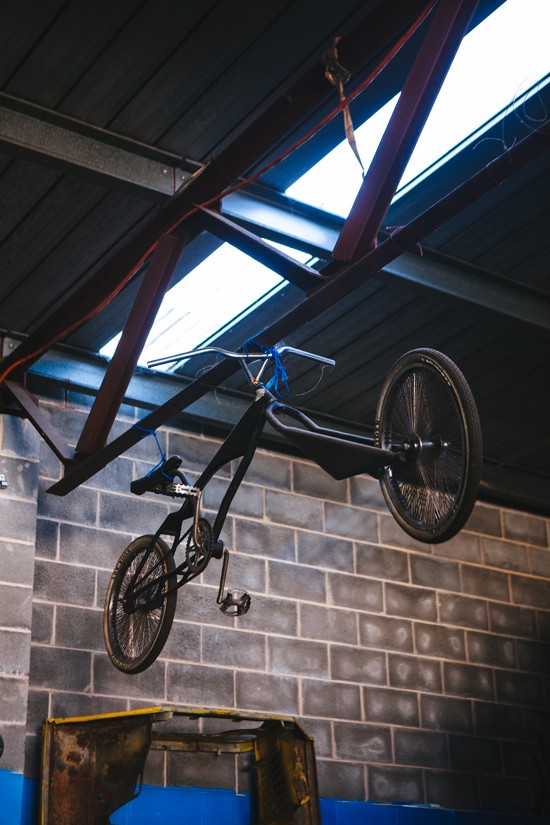 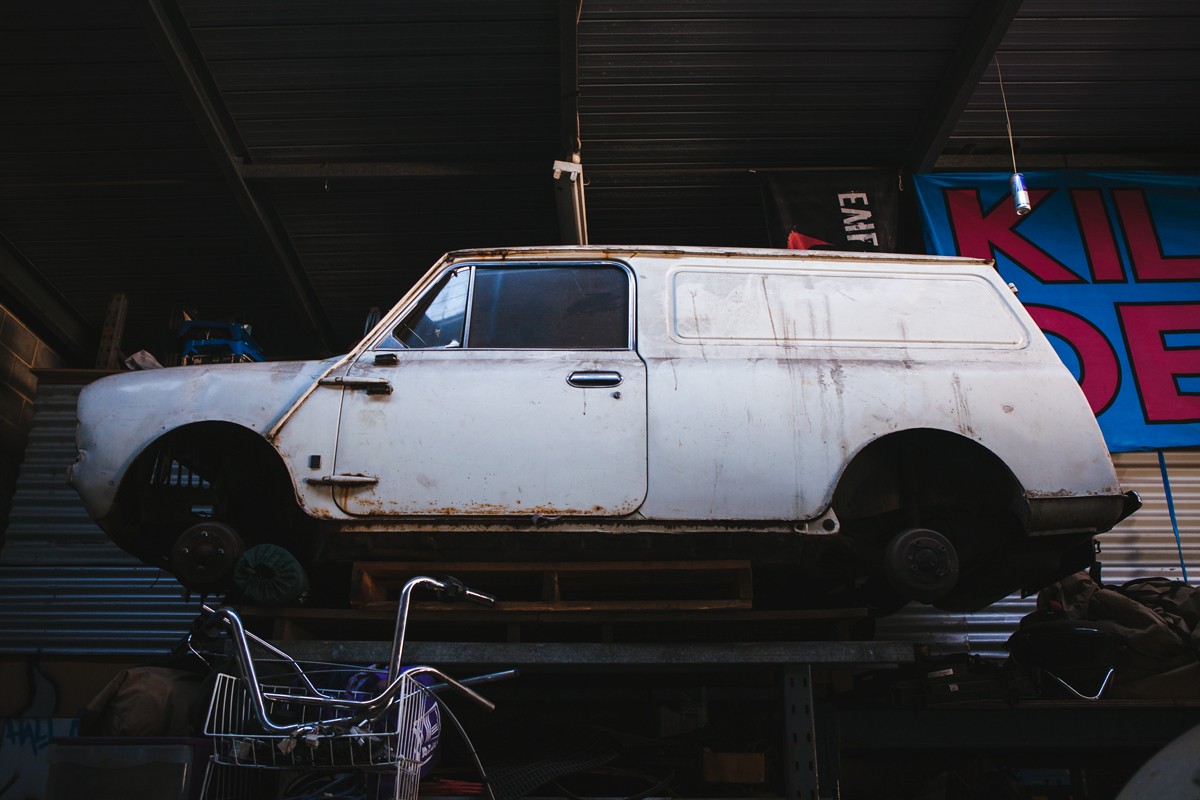 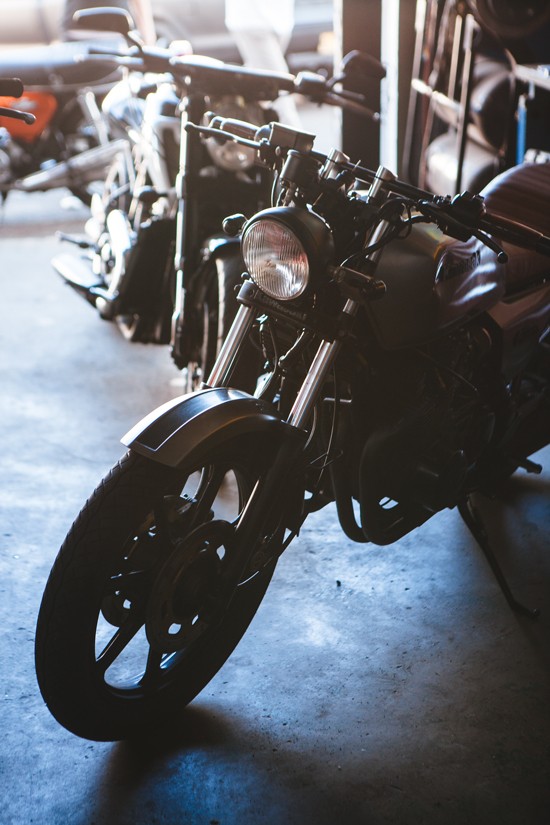 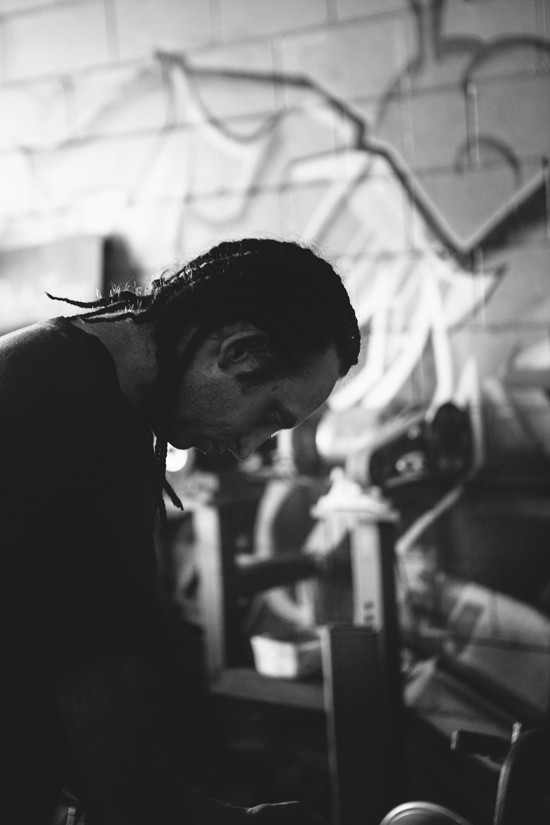 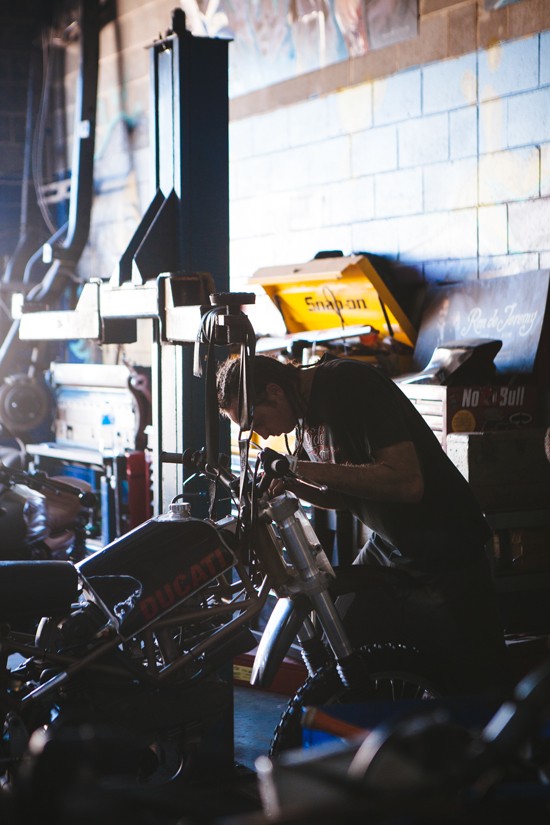 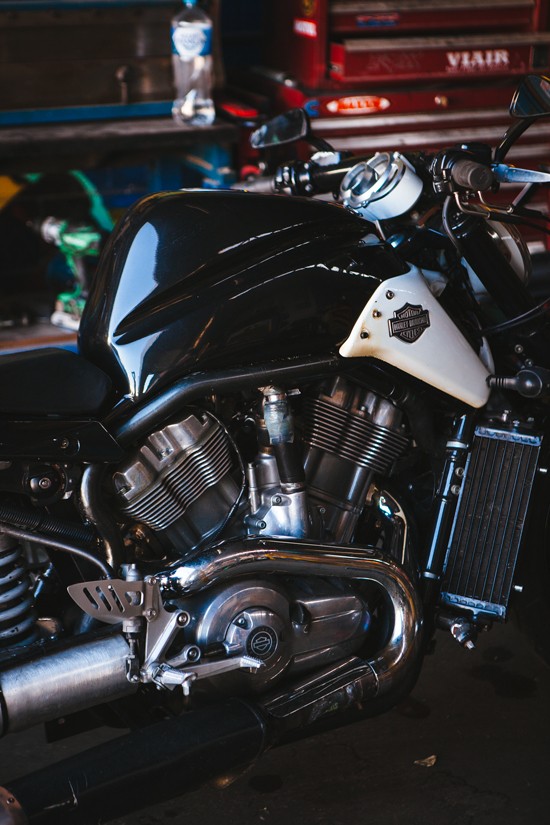 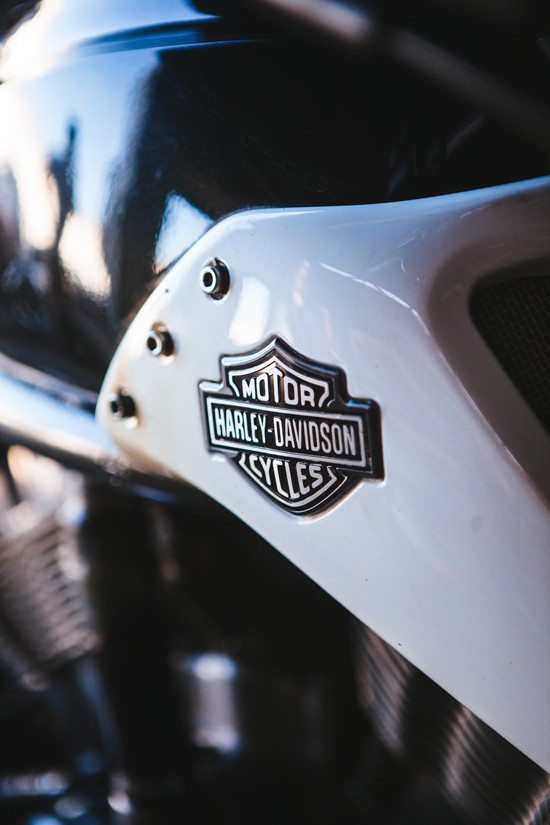 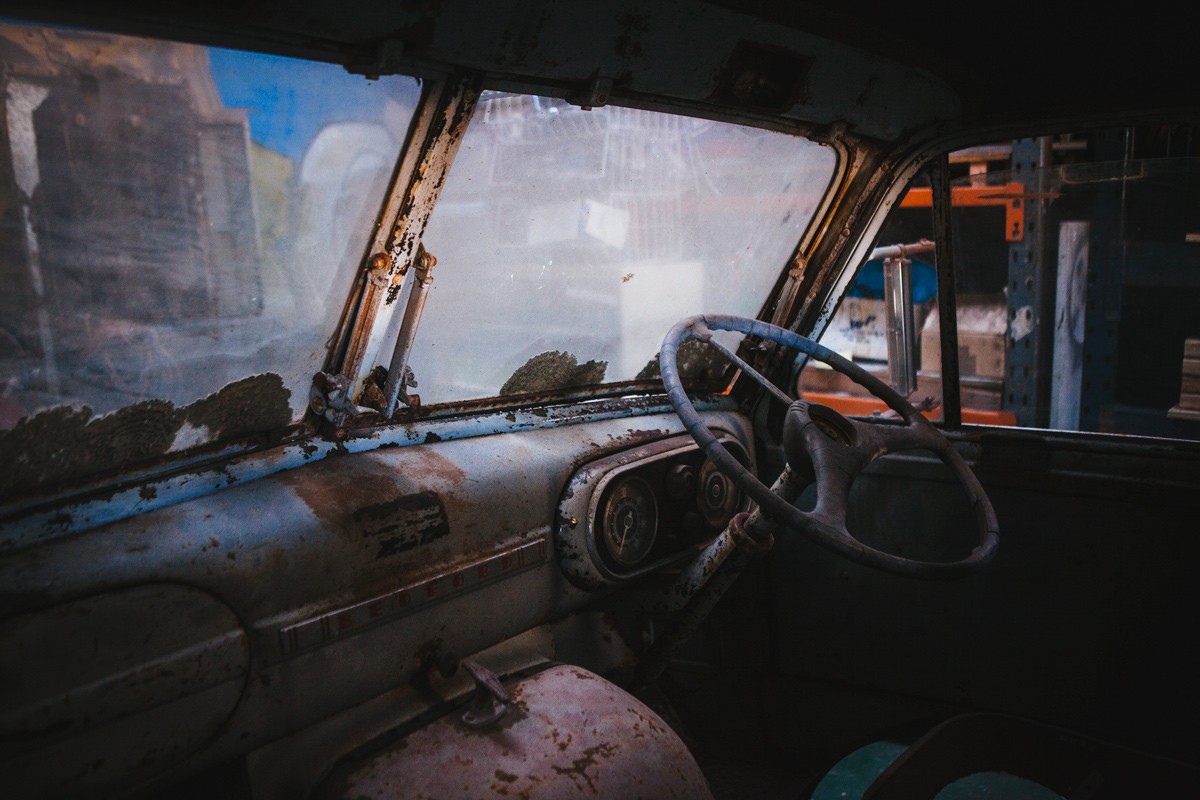 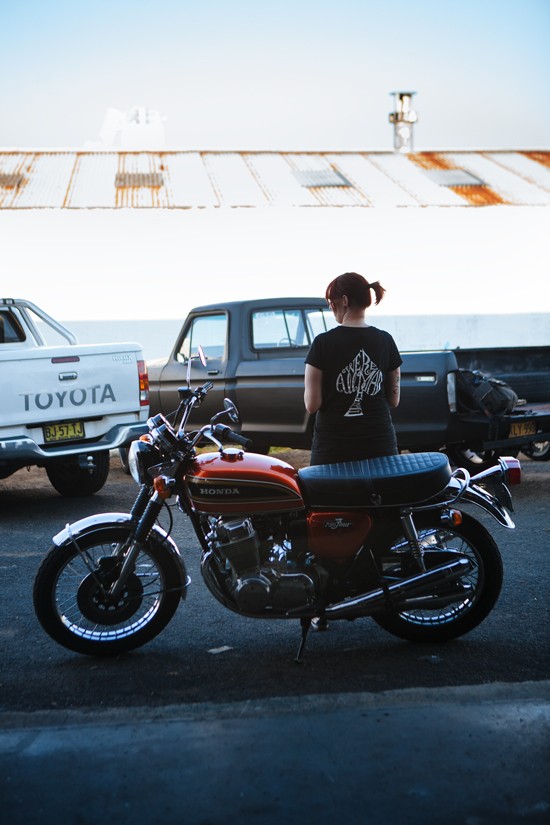