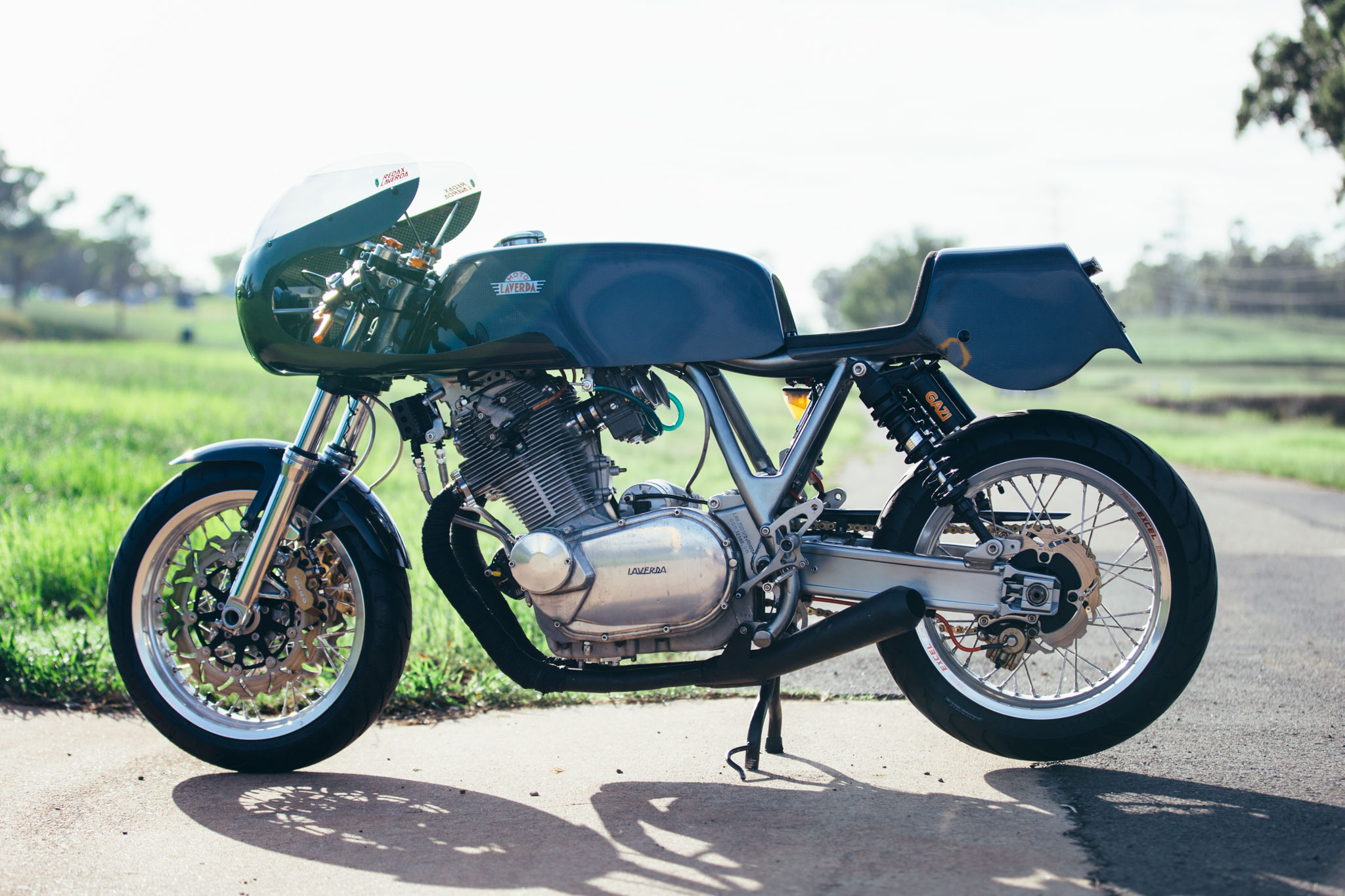 7 years in the making only for it all to be turned into ash. Despite the disaster, Chris wasn’t beat. Like a Phoenix, this Laverda would rise from the ashes to be born again. 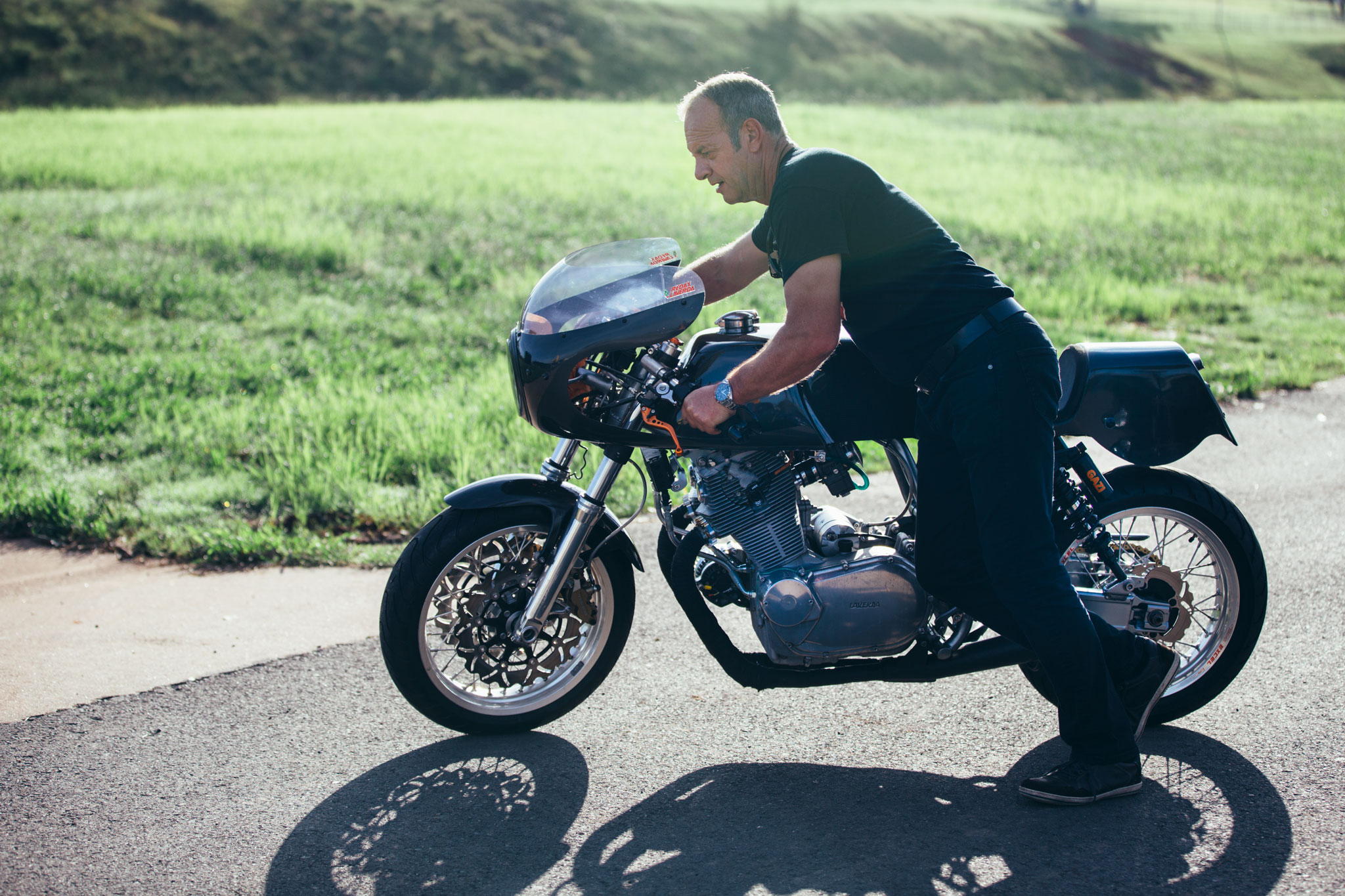 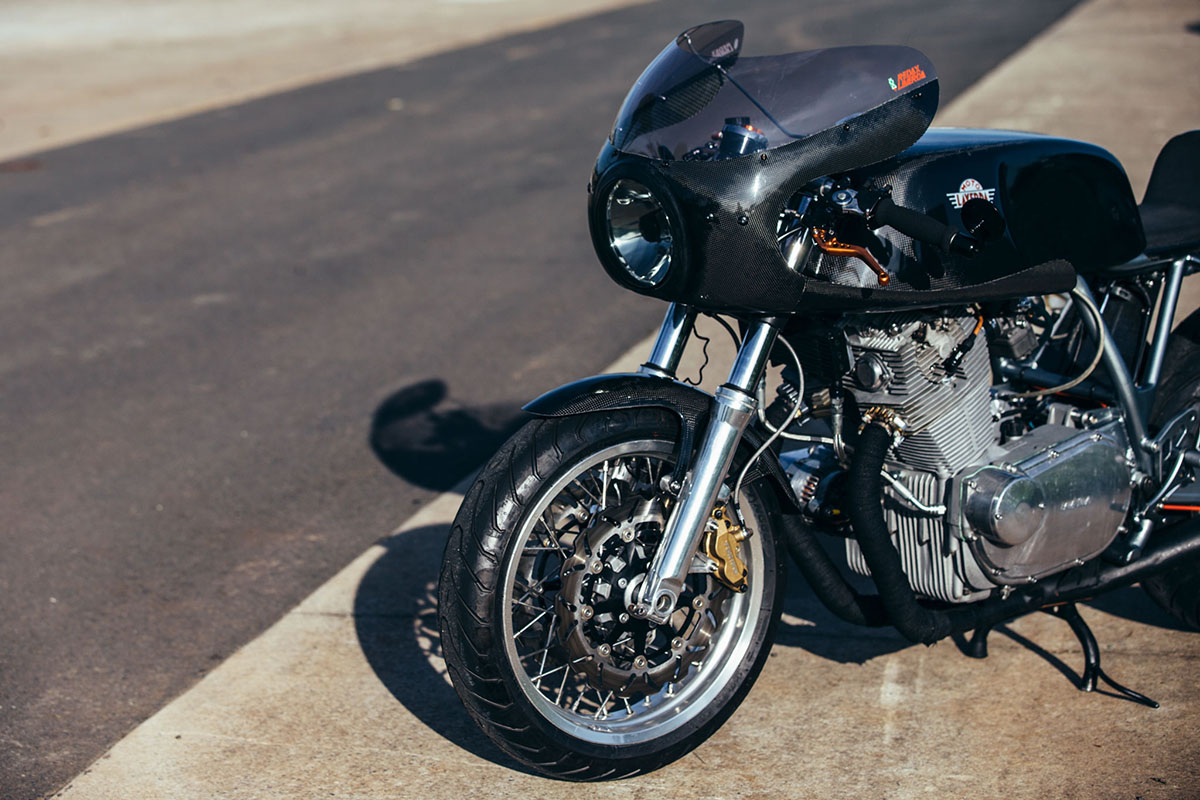 Chris is no stranger to Laverda’s having owned a fair few 1000 triples in his time. It would be time for a change however, albeit not too drastic – keeping to the Laverda brand, which he was so passionate about. “One of the NSW Club members had a 750 twin for sale that was in thousands of pieces. I bought it with the intention of building up a special. I had the motor for about 2 years, but had no contacts that could build the motor to my specifications, so it sat is boxes waiting to be completed.” 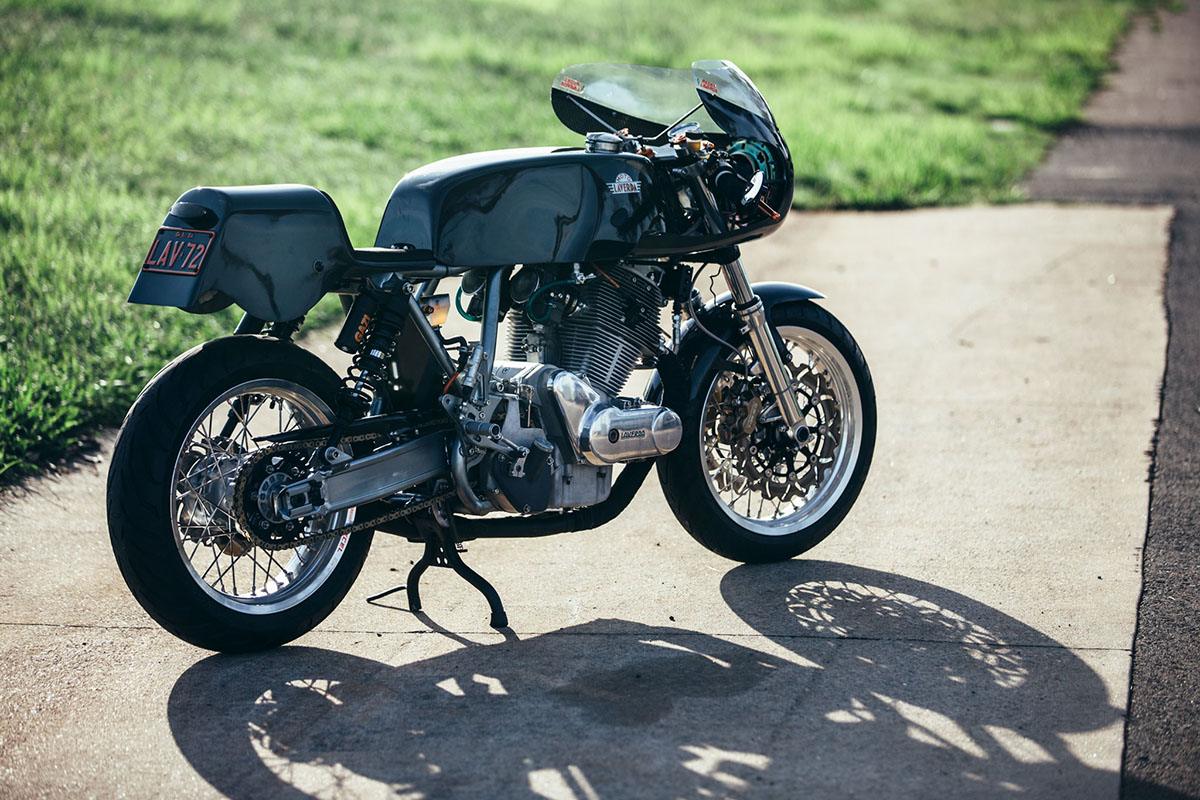 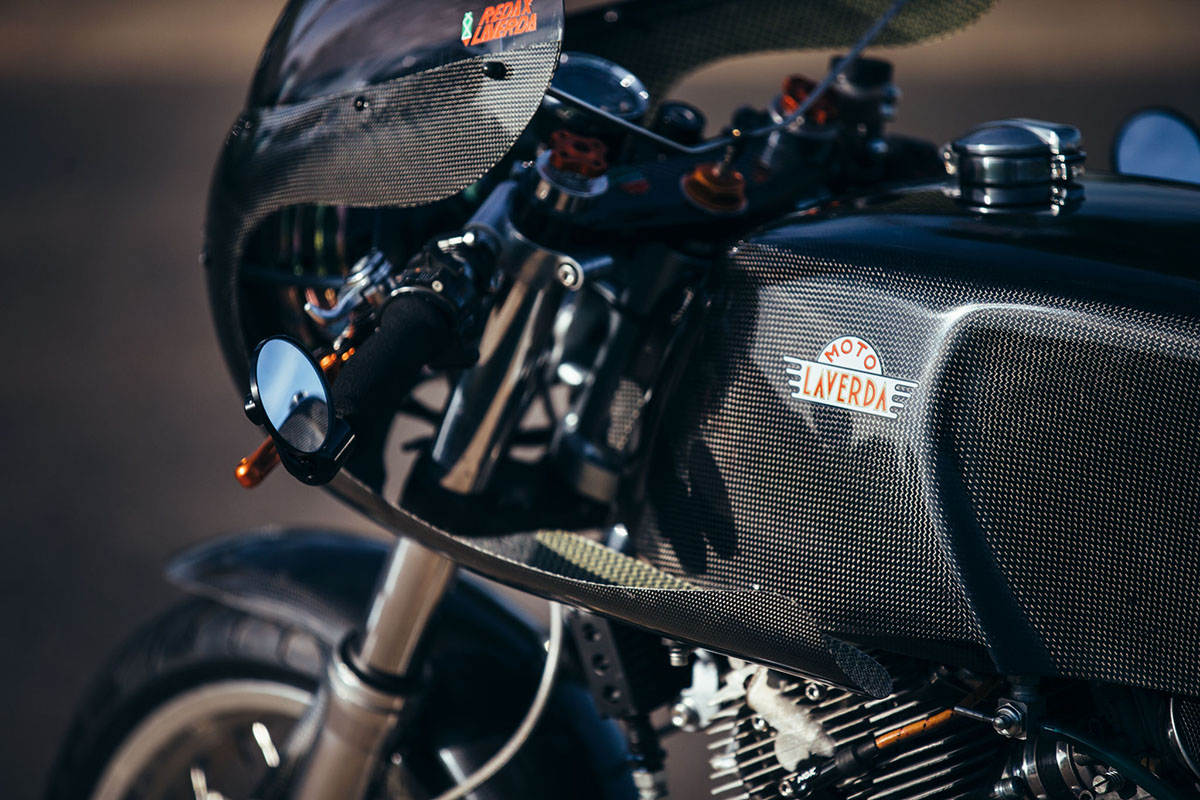 Meanwhile, Chris was trawling through the good ol’ Trading Post, whereupon he came across an advert for tons of motorcycle parts for sale. “I gave them a buzz and asked if they had any Laverda parts. A call back in ten minutes confirmed they had a 750SF2 frame. I was living in Sydney at the time, and picked it up 4 hours later for $50. The frame had some history to it as well; it was raced as a sidecar at the local speedway track. It still had the chair mounts welded to the frame.” 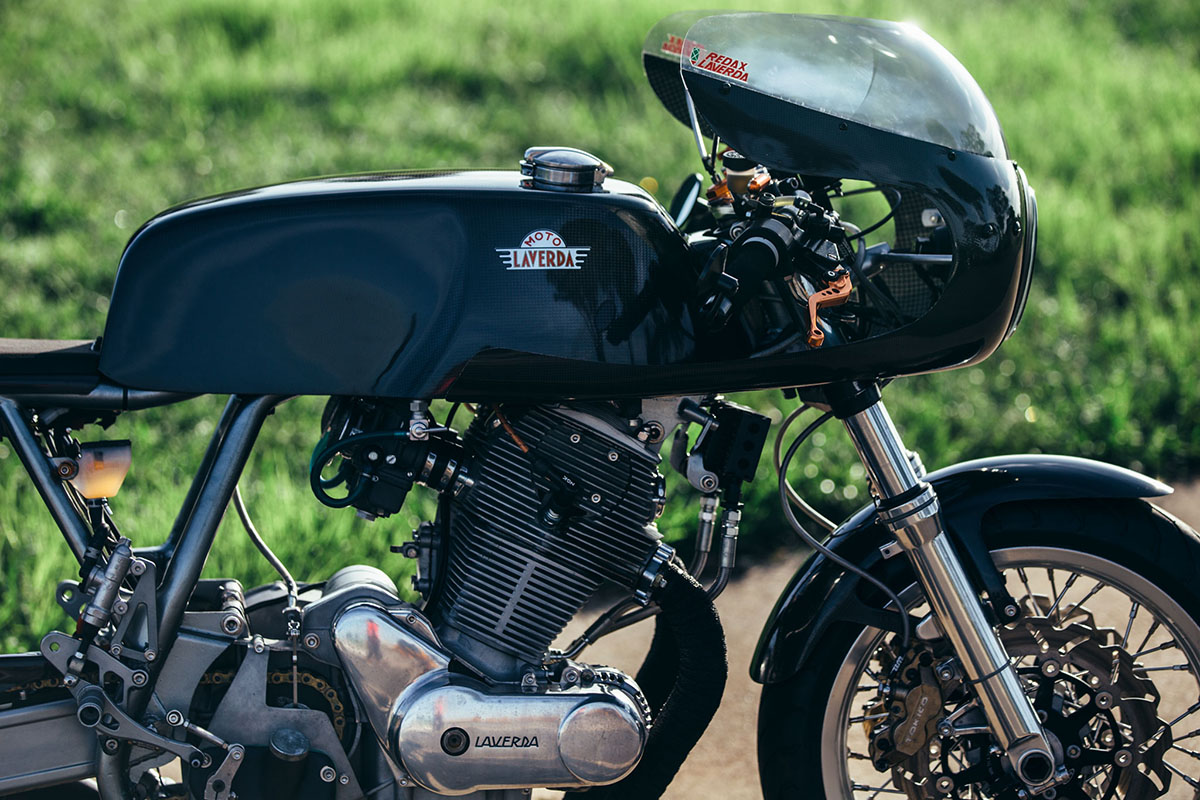 Work on this project was now underway, however still without someone to do the engine work, a GSXR750 “Oiler” was transplanted into the frame. It would be a long road completing this project – 7 years in fact – but Chris was persistent, chipping away bit-by-bit in his workplace workshop until it was finally completed and brought home, just in time for Christmas. 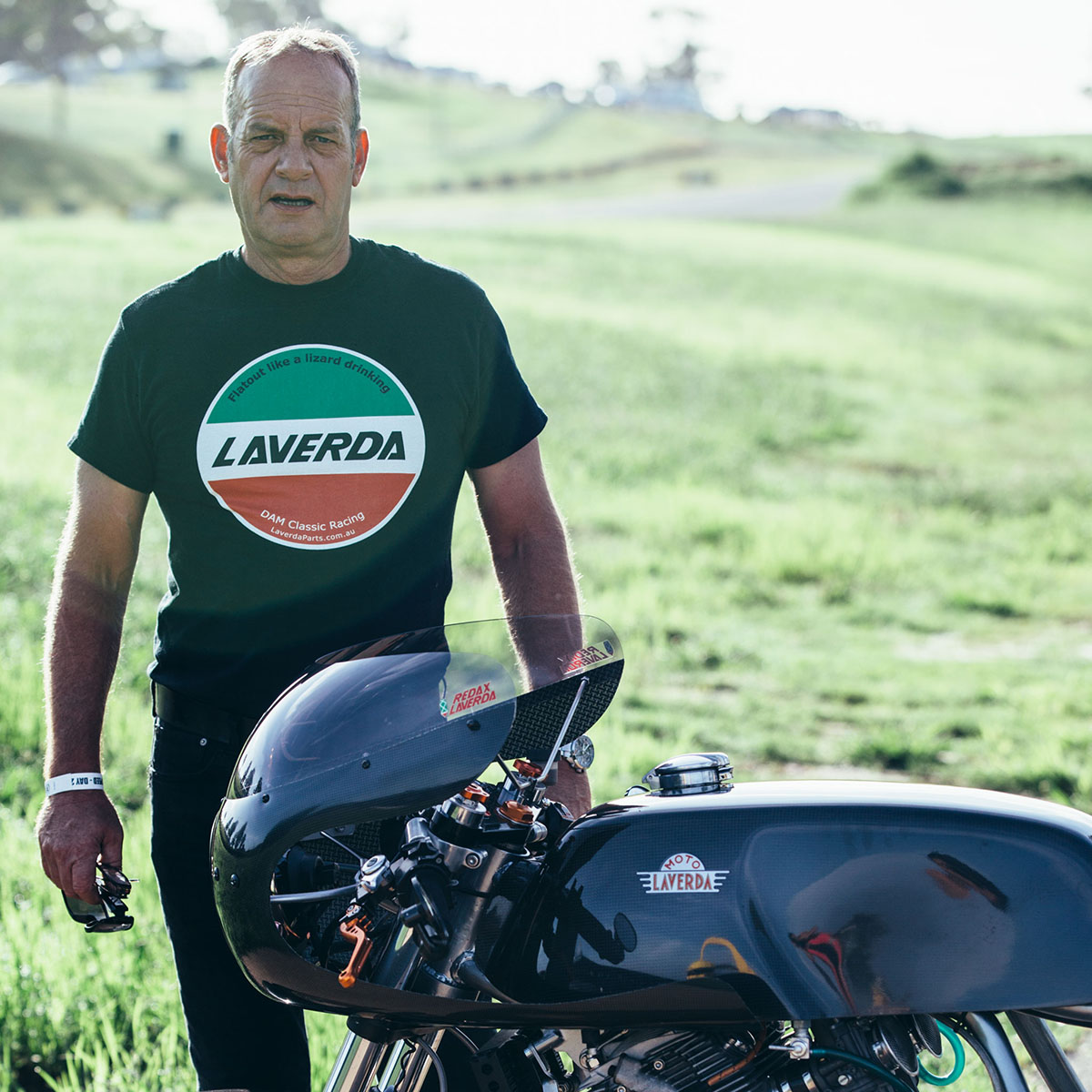 This is where disaster would strike. The day before Christmas, Chris found himself doing some work outside his shed where he kept his bikes – this newly completed project having just joined their ranks. “I had gone in to use a metal cut-off saw. A silver bike cover blanketed the Laverda – the kind most of us have. With the freshly cut metal posts planted in the ground, my daughter pointed out smoke coming from the shed. I ran in and saw my seven-year project bike on fire! Sparks had set the cover ablaze. I grabbed a fire extinguisher from my boat, but to no avail. My wife managed to bring a hose, which I used to douse everything as I tried to save the other bikes from catching fire. The bike was cooked. What a great Christmas present.” 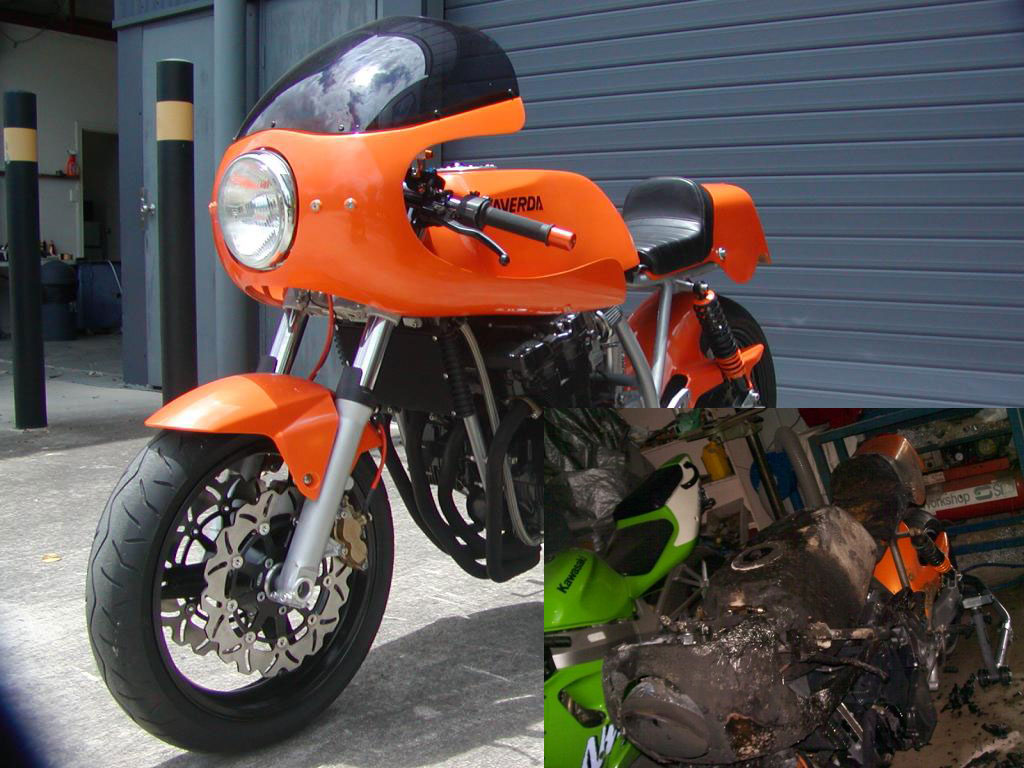 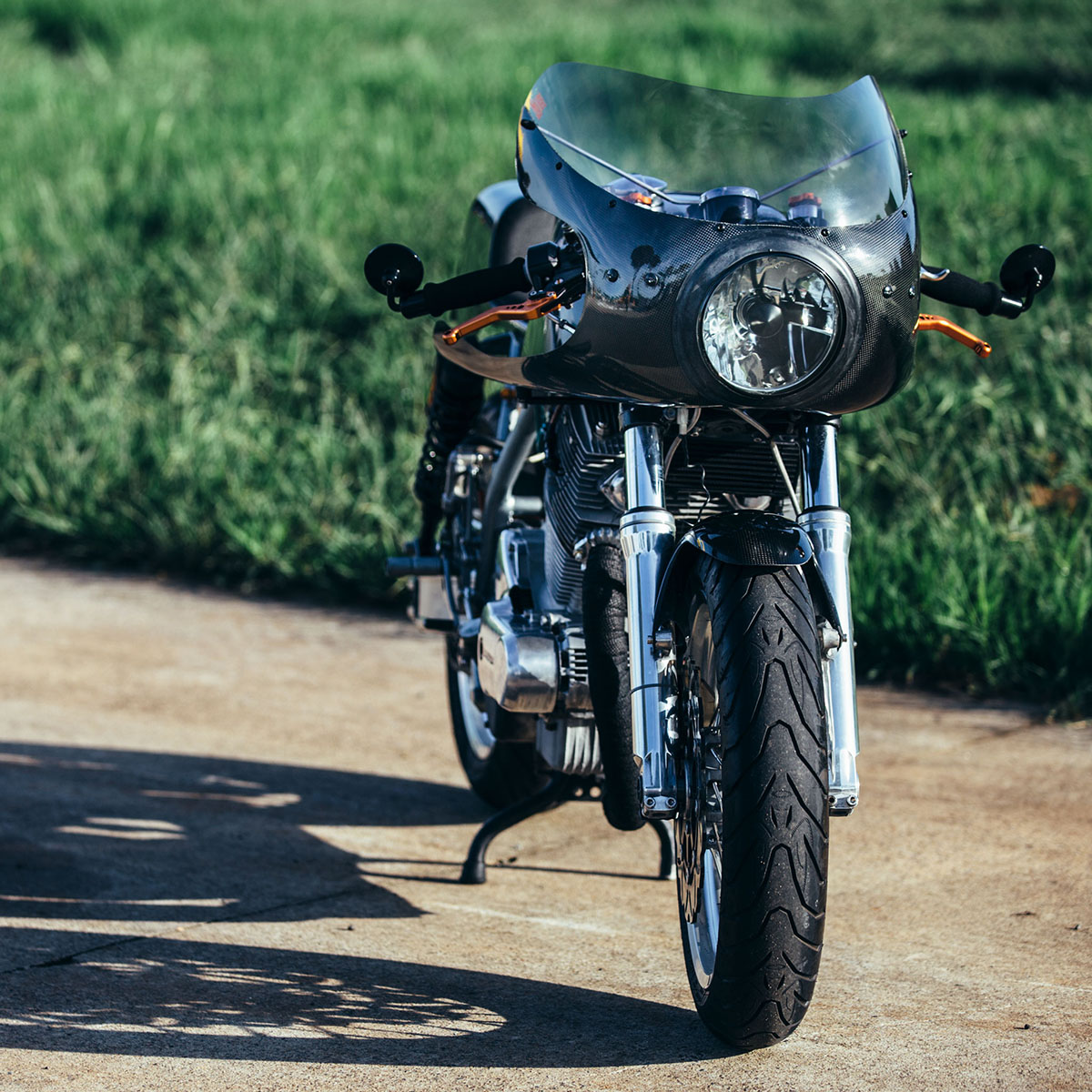 It will no doubt pain you to read that story. Countless hours put into a project, only for it to go up in smoke. It’s every builder’s nightmare. This wouldn’t be the end for this machine, however. The box of pieces that would form a Laverda engine was pulled out, and Chris’ determination set into overdrive. He wanted to take this machine to the Barry Sheene Festival of speed. Only he wouldn’t have 7 years to build the bike, but 3 months. Having relocated to Queensland, Chris was able to find the folks at Redax Engineering who could rebuild this engine for him, which would be the first step the next reincarnation of this machine. 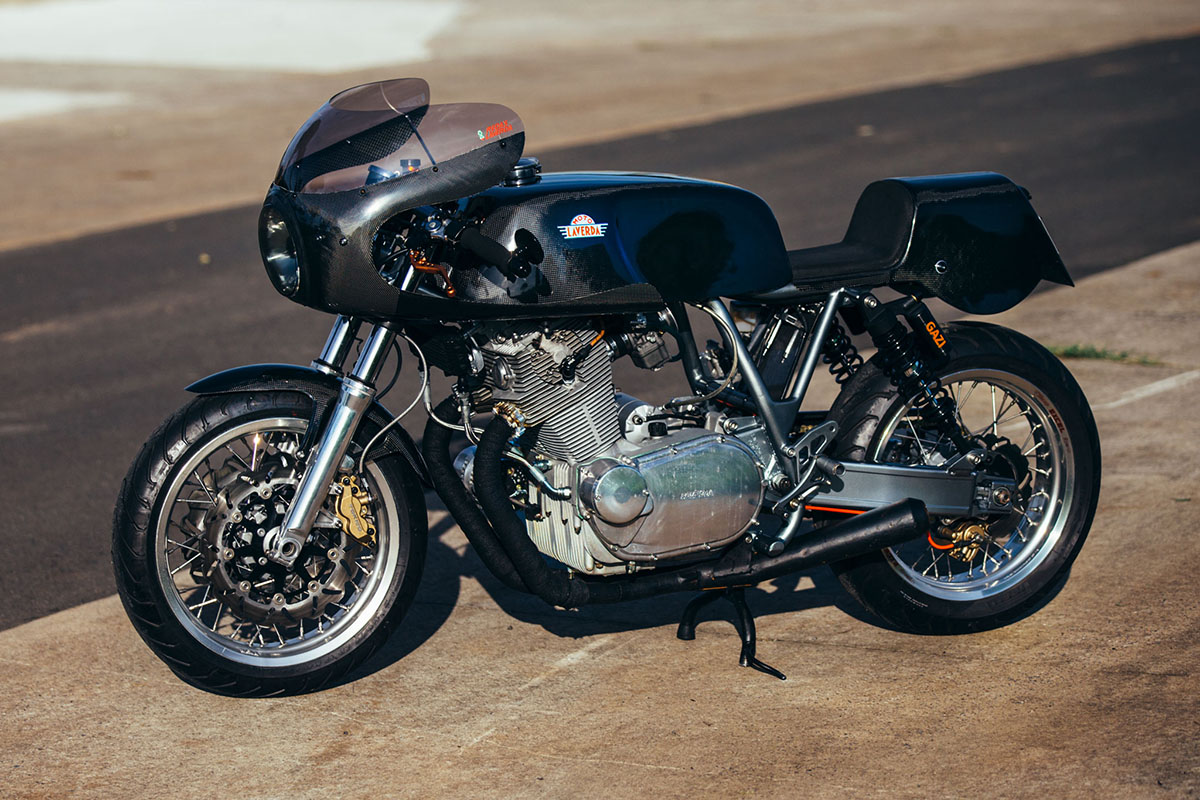 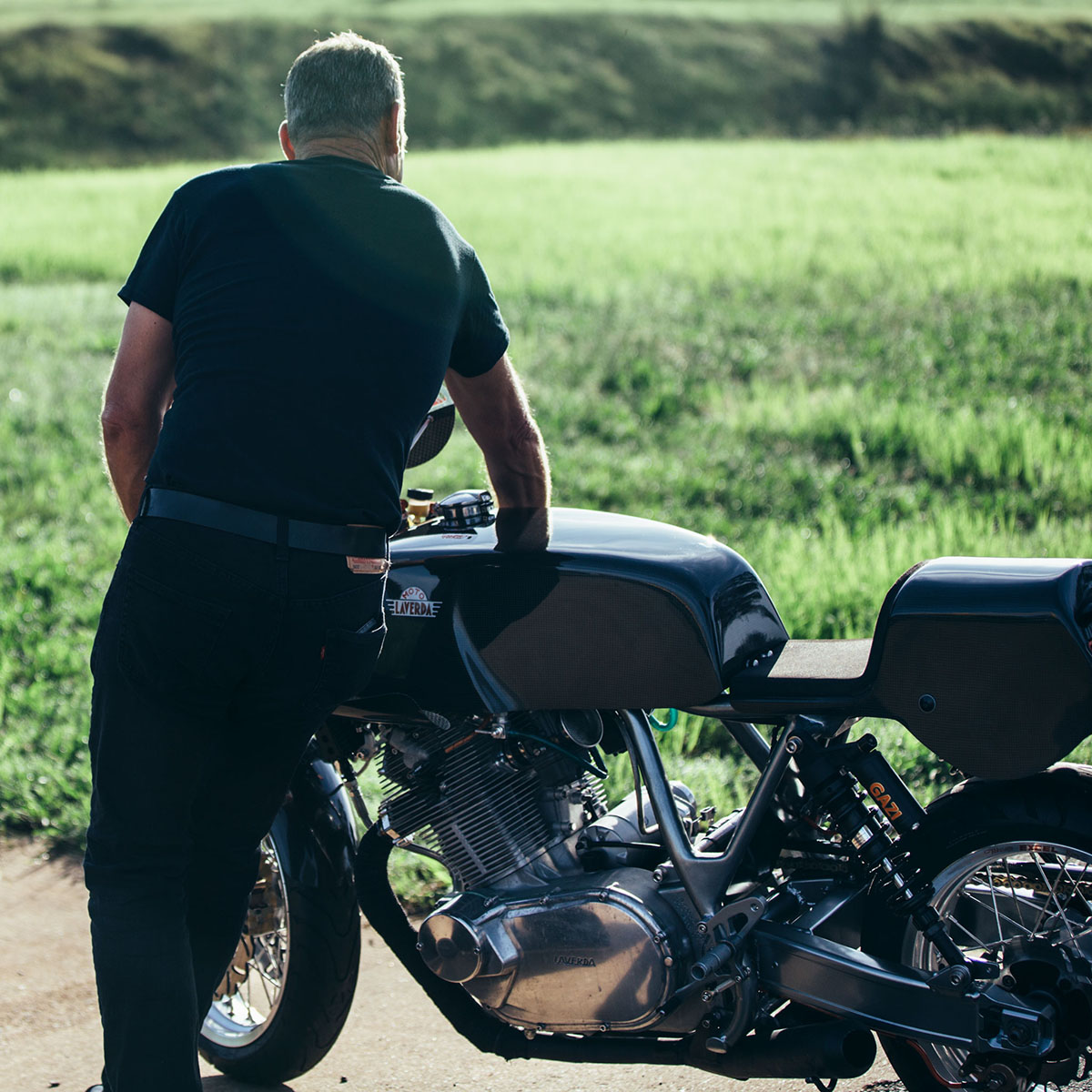 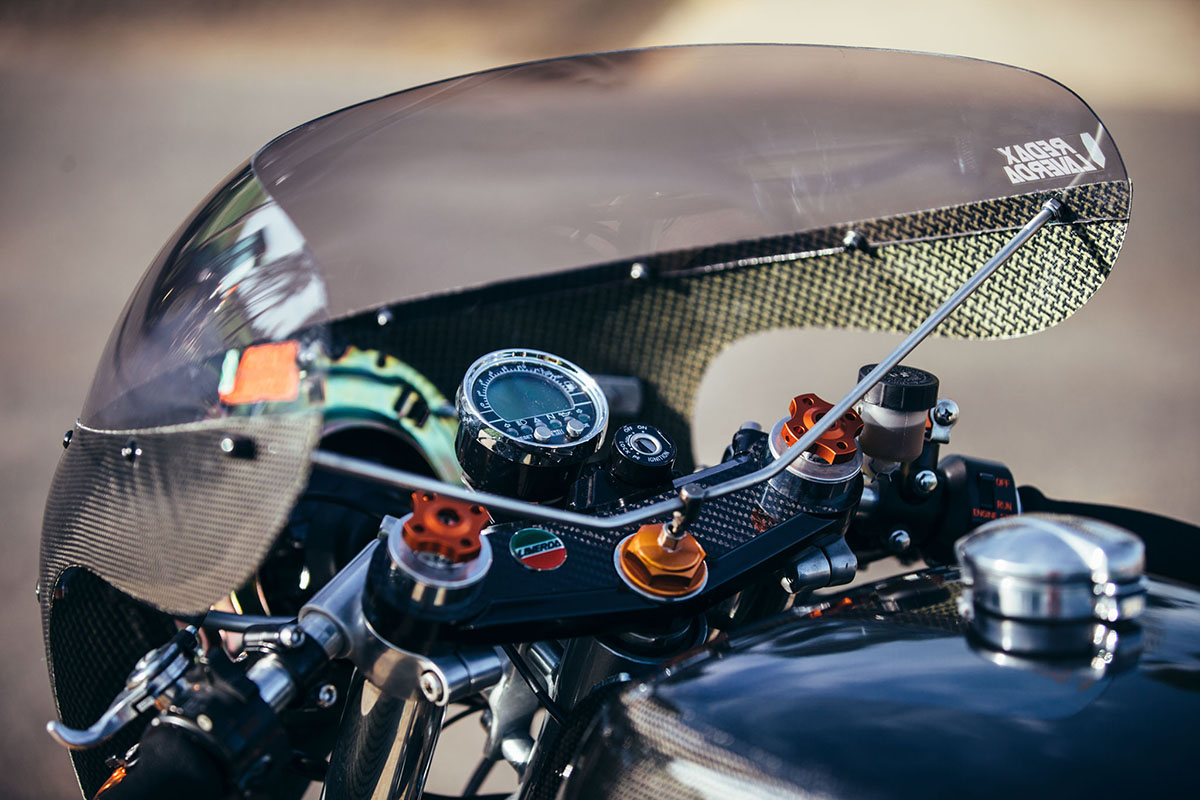 “I did all the modifications to the bike myself, bar the engine and the wheel lacing, and carbon bodywork, which one of Laverda Club members does in Slovenia.

But, as I’m OCD, it took many times to do, re-do, and re-do things over and over. The Laverda Ghost carbon front guard, as an example, was modified over a two-week period, and I’m still not happy. 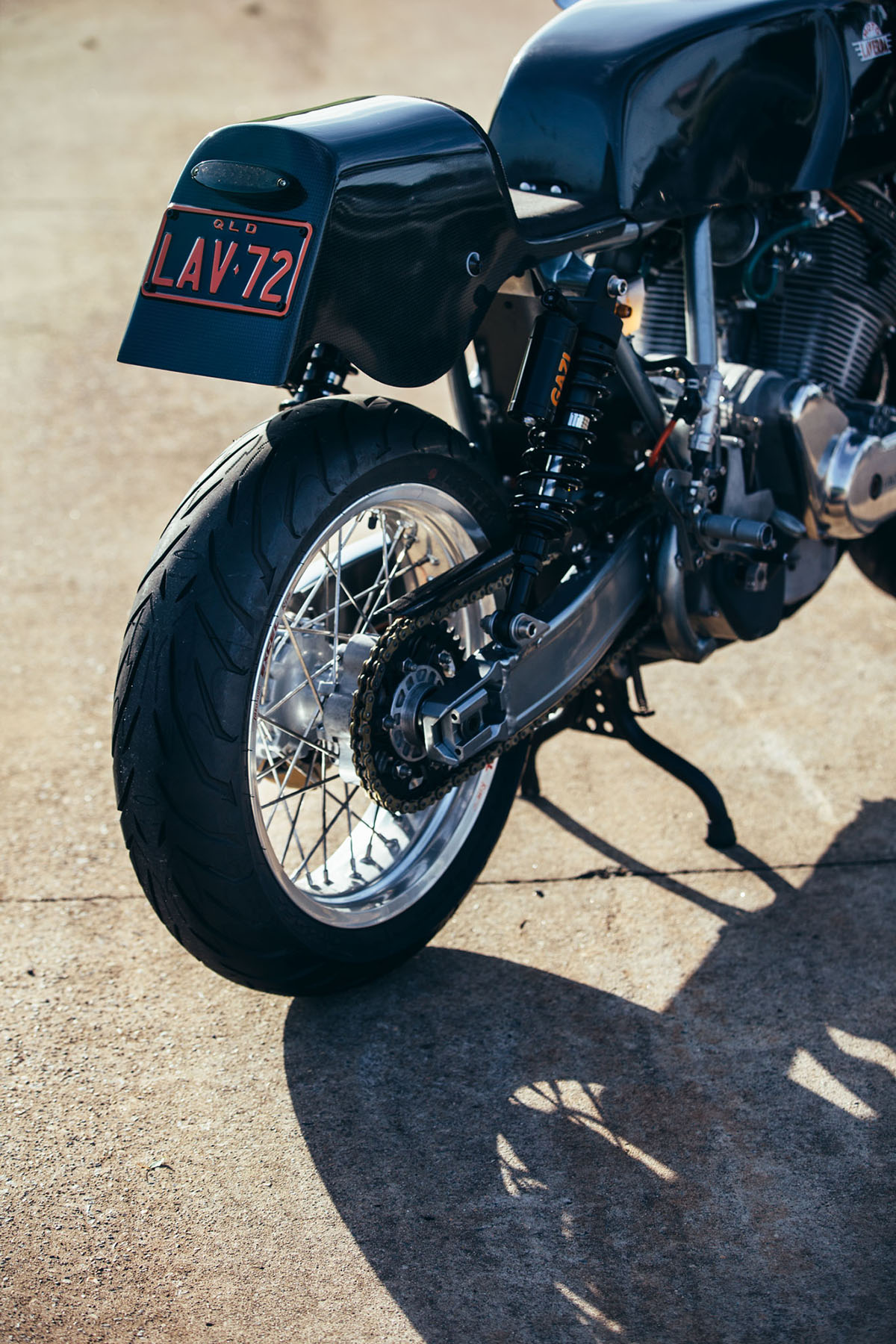 “The 270 degree crankshaft makes the bike sound Ducati-ish. There was 5Kg taken off the crank, so it’s very peaky, and is limited to 9,500 RPM – that makes about 5,500RPM of usable power.

It’s actually a lot of fun to ride. It’s not as fast, nor comfortable, as a modern day bike, and gear changes are slow, but we have to remember we are still talking ’60’s and 70’s technology in these gearboxes.

But unless you’ve ridden a Laverda, you just wouldn’t understand.” 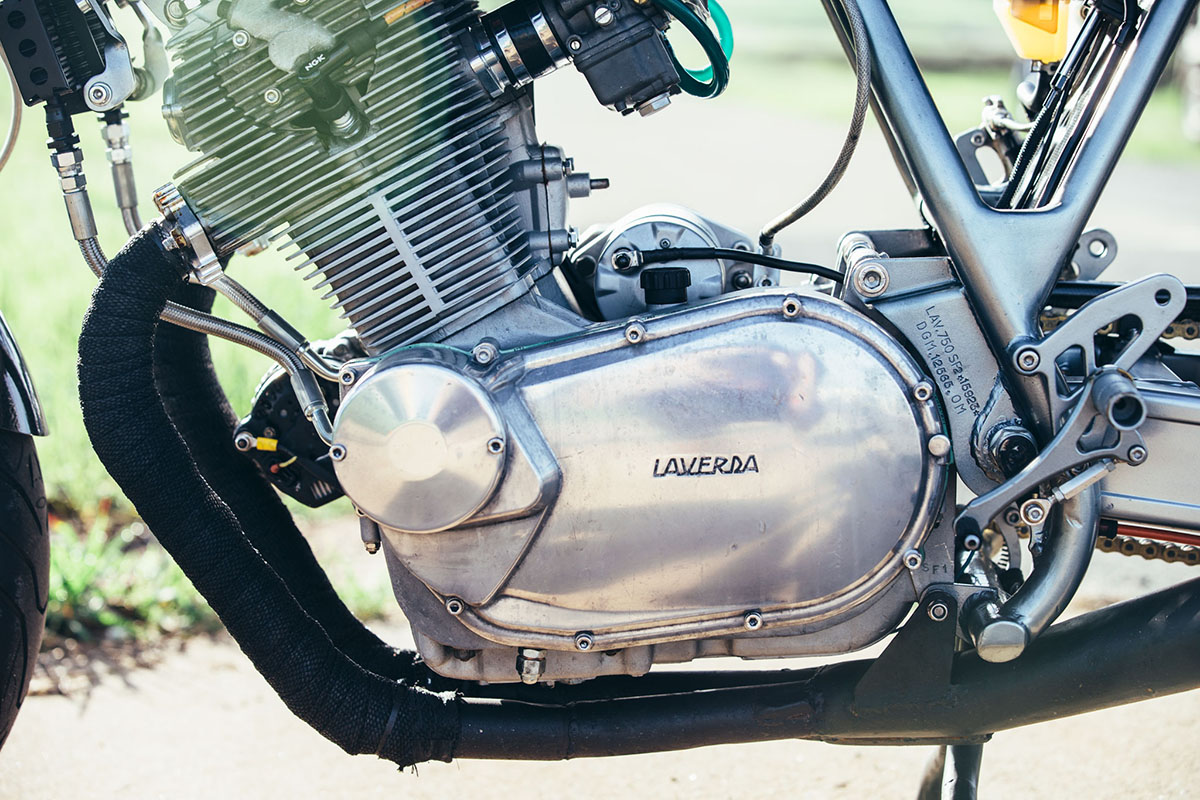 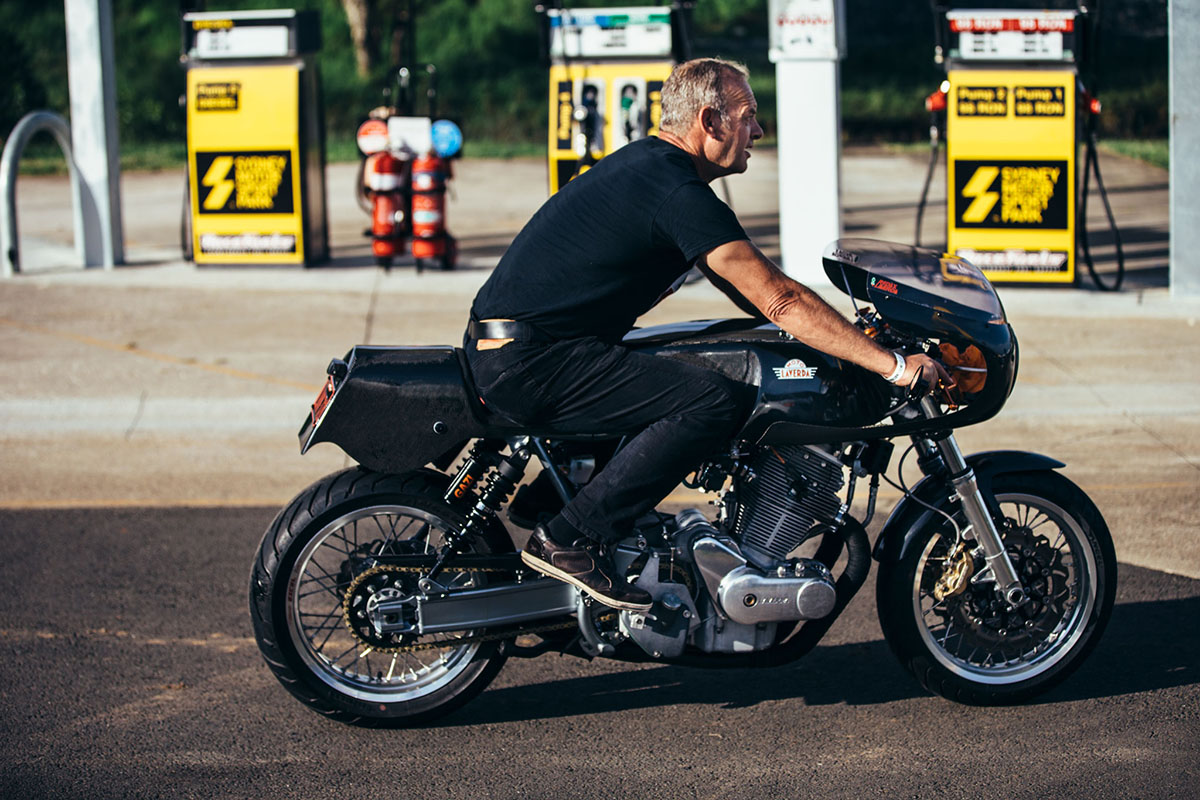 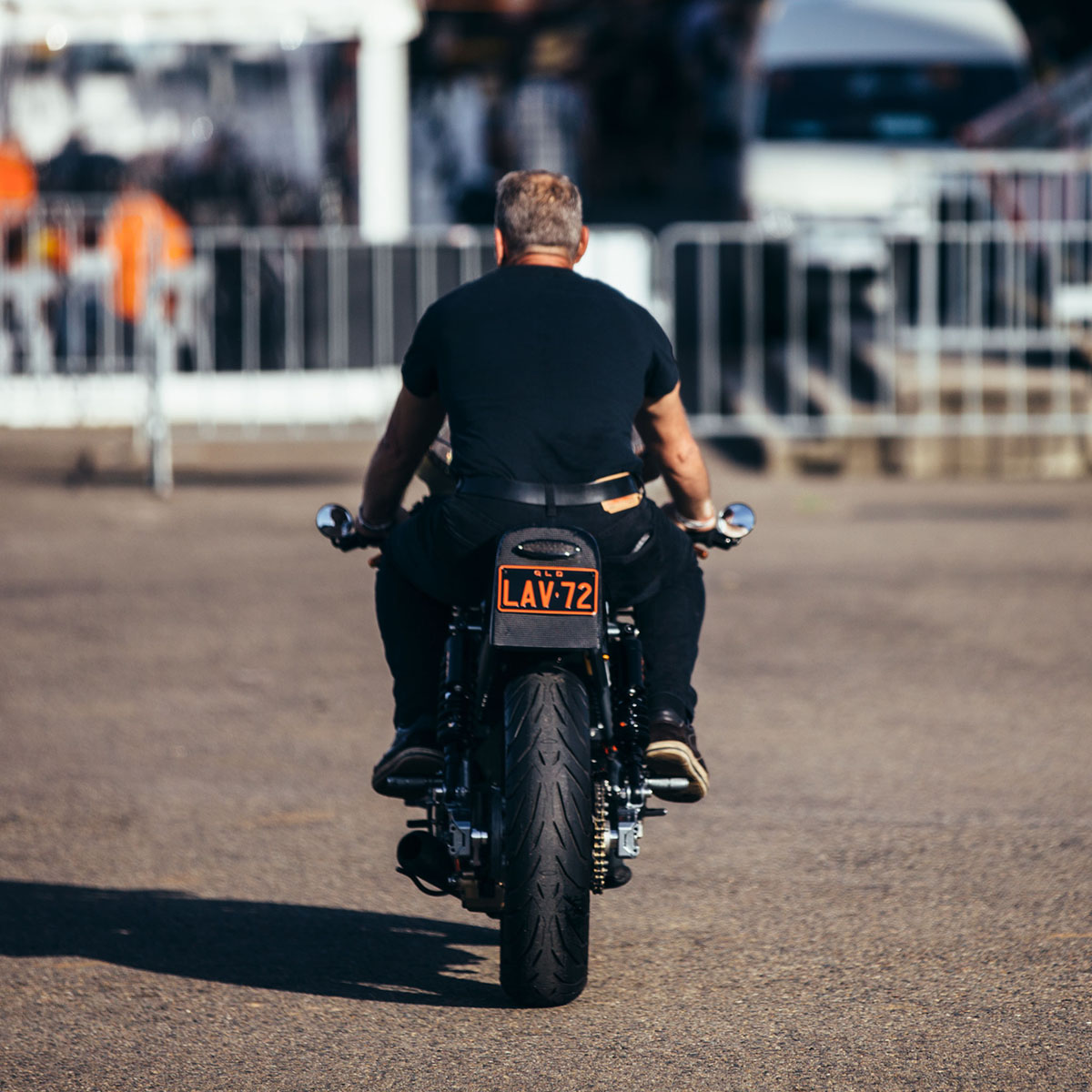