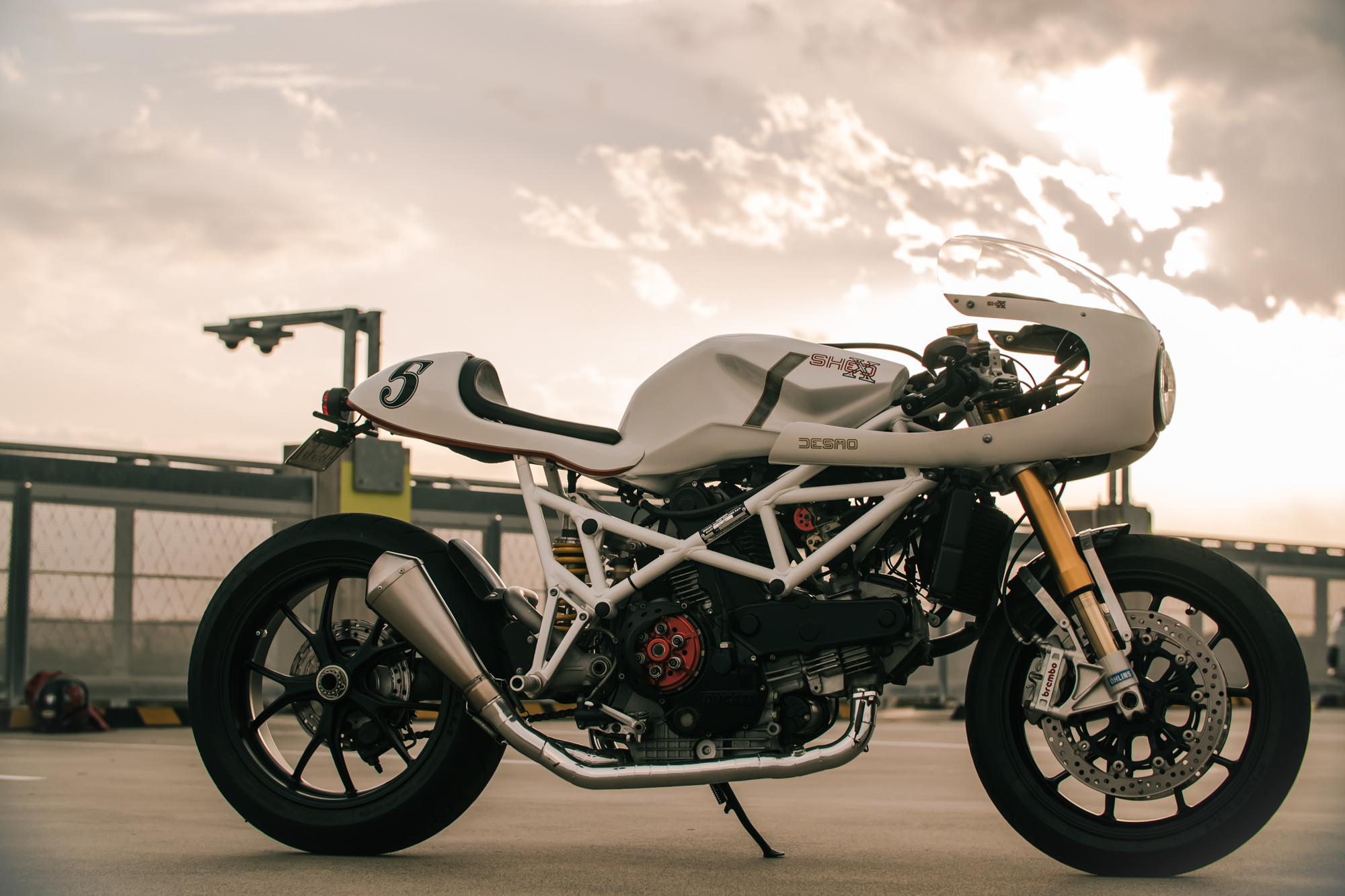 Shed-X have carved themselves a name and style that is due for all accolades. Fiona’s machine ‘El Bastardo’ is no exception. A donor Ducati ST2 that has been torn asunder and rebuilt into a whole new form. 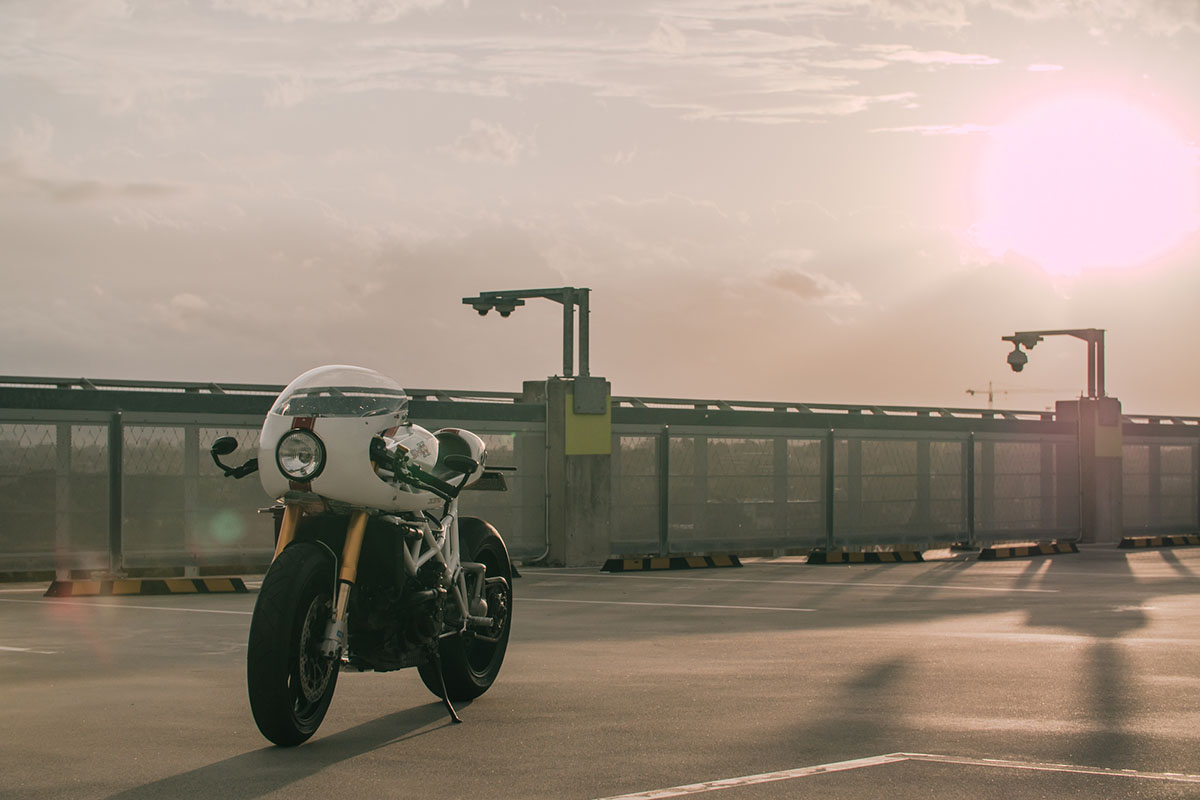 No stranger to bikes, Fiona’s passion for 2-wheels is in its third generation for her family. “My grandfather used to race motorbikes, while my father was well known for his hooliganism at parties, riding through houses – so for me bikes are probably hereditary!” However when we caught with Fiona, we decided against dodging this fine machine down the hallways. 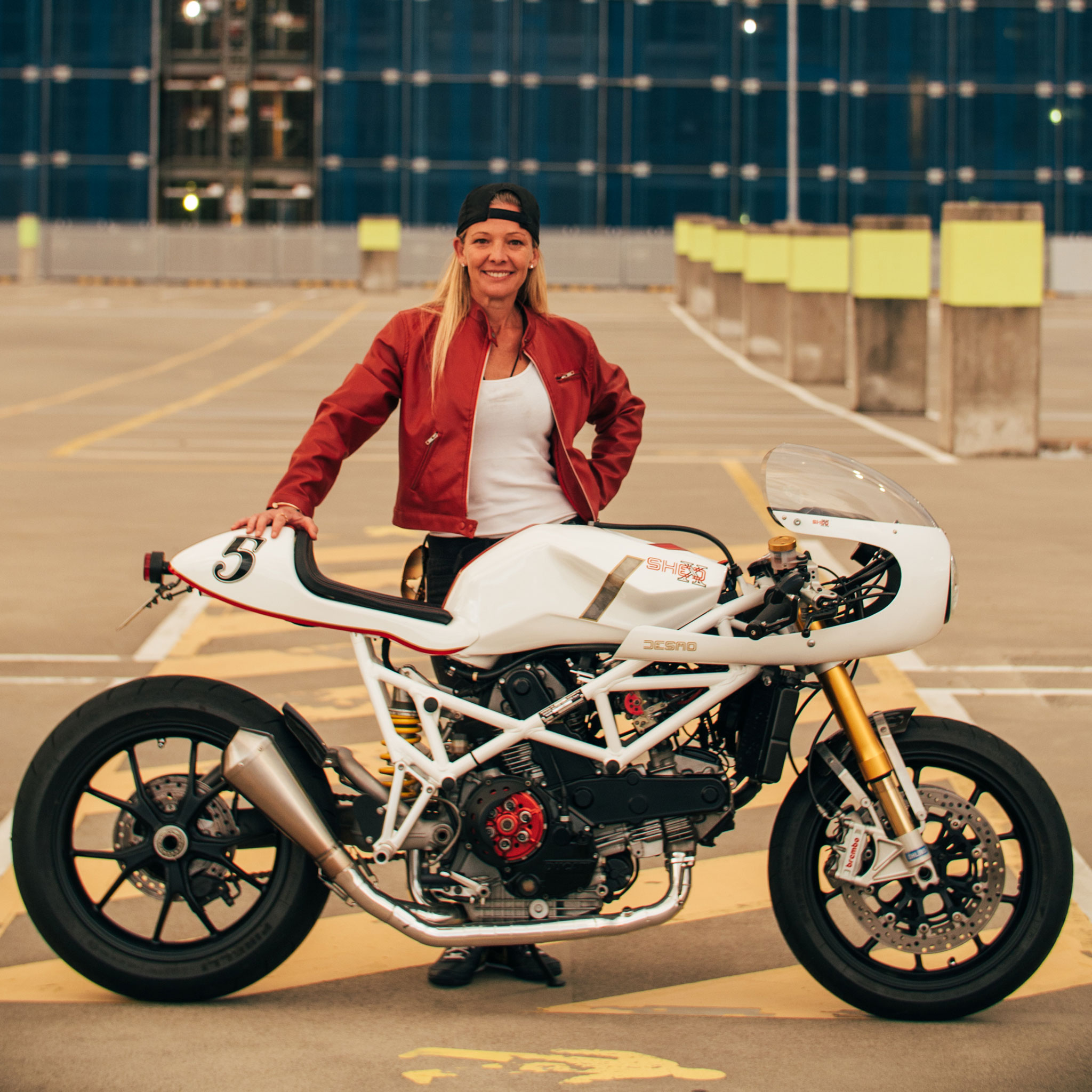 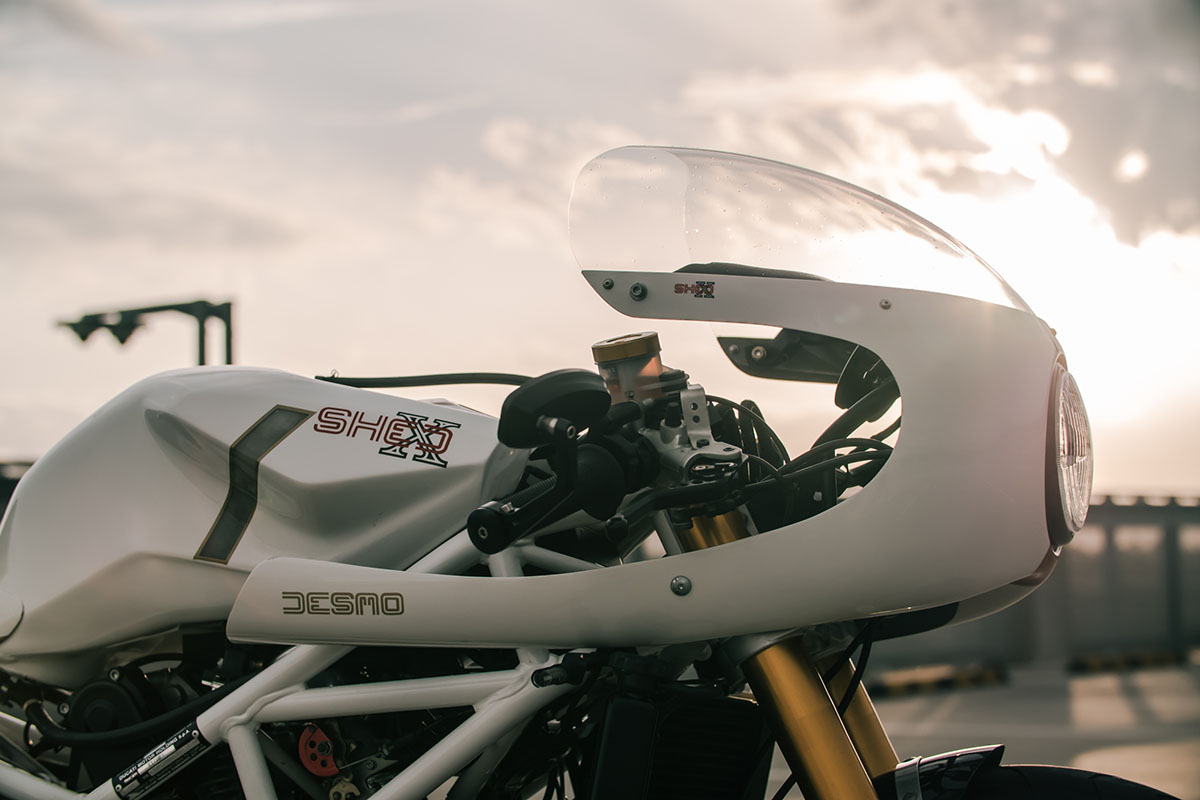 Fiona first stumbled upon this machine back in 2013 when it was still owned by the lads at Shed-X. A magazine had featured it, and sure enough it was love at first sight. Fortunately, a mate of Fiona’s owned his own Shed-X machine at the time as well – the all too familiar Paul and his Shed-X – allowing her to have a ride and get a taste for what these heavily modified machines could do. ‘I loved the way it handled – so decided then and there that I definitely wanted one for myself.’ 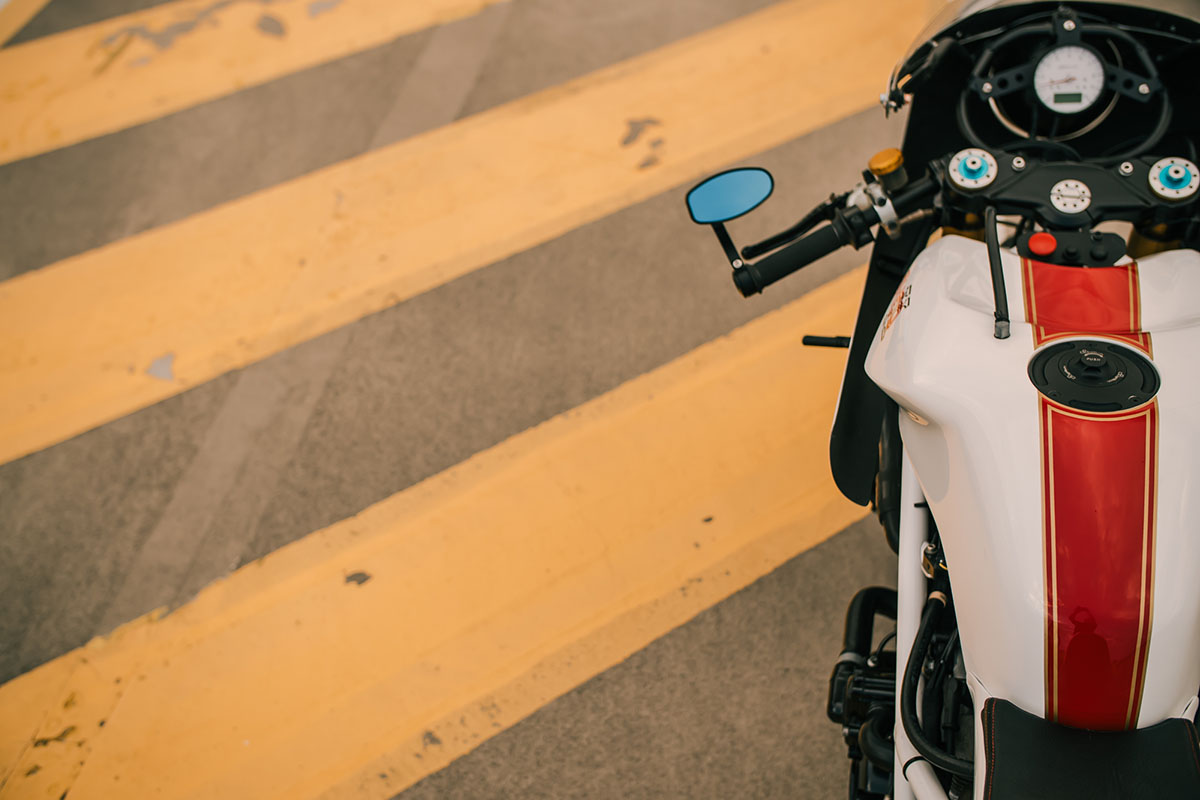 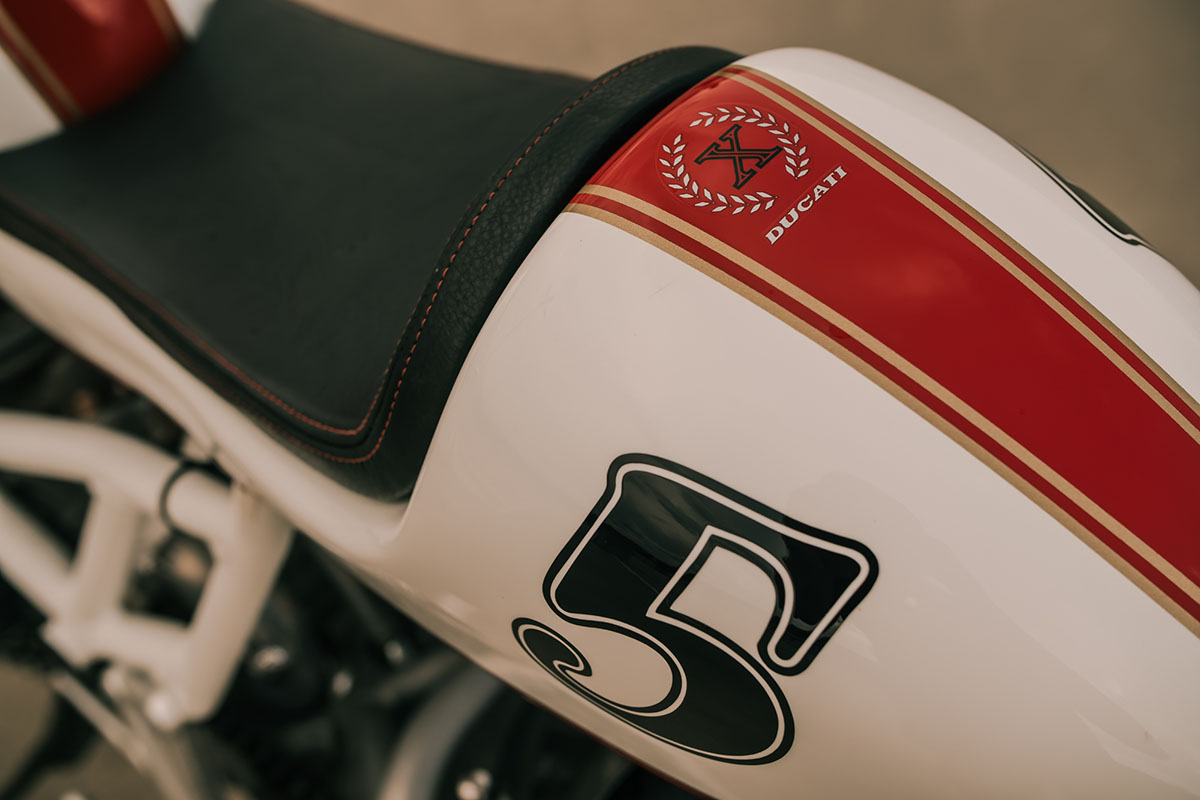 At the time Fiona was enjoying a couple of other rides, in the form of a Yamaha Renaissa 250cc and a Harley-Davidson Dyna. Both rides were being enjoyed, but something was needed that could bridge the gap between lightweight but not enough power, and enough power but too much weight. The investment into a Shed-X machine was only growing more appealing – and upon Shed-X build no.1 ‘El Bastardo’ being listed for sale Fiona was on the phone and picking the bike up the very next day. 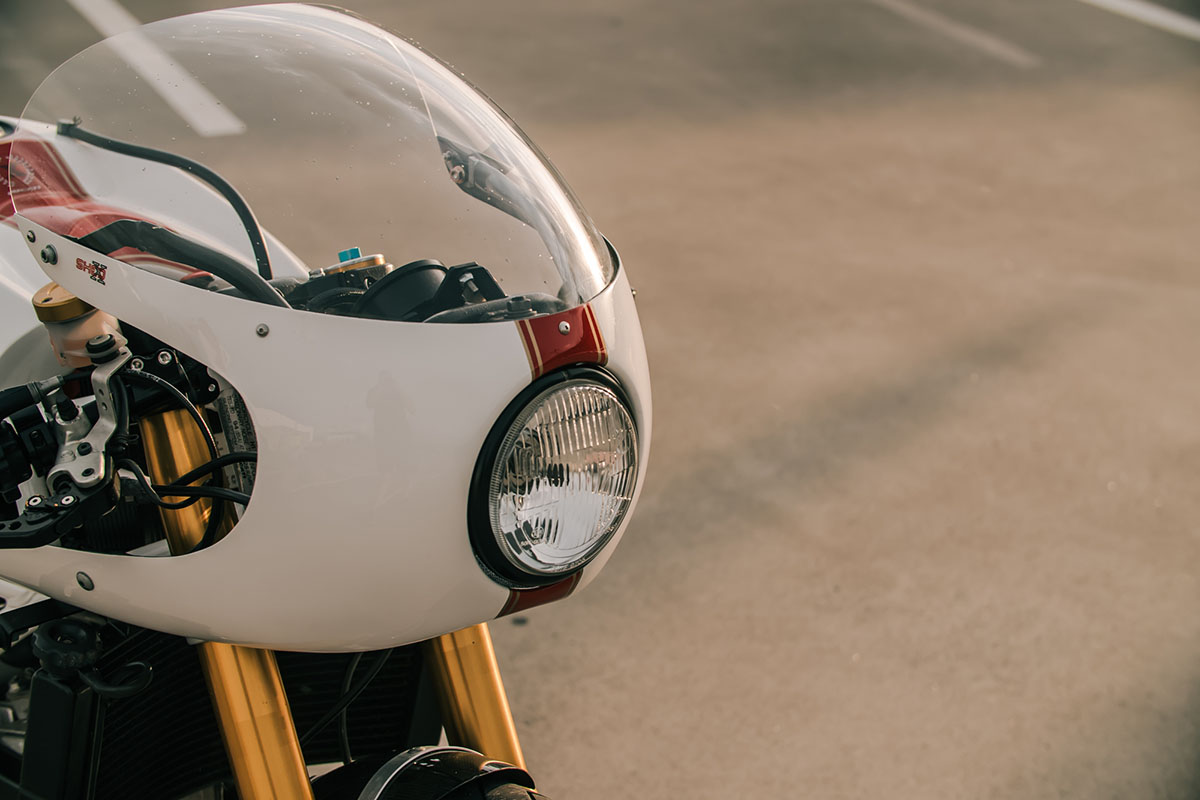 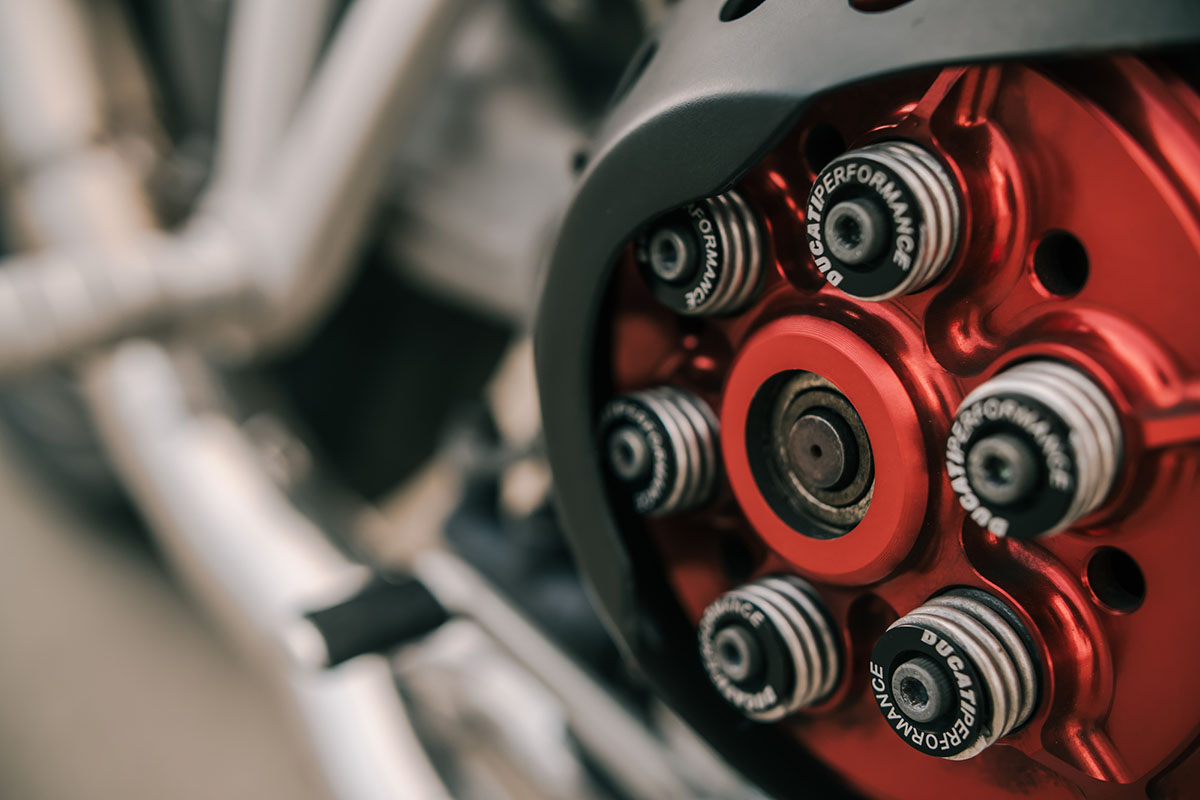 ‘El Bastardo’ started life out as a not quite inspiring Ducati ST2. A good enough bike sure, but Jim and Neil from Shed-X had far grander plans for this machine. A major overhaul in performance parts, as well as aesthetics would turn it into what Shed-X are famous for. The engine was pulled out for a complete rebuild with high compression pistons. The stock wheels were binned, along with the forks, swingarm, clutch, lights, tank and brakes. The sub-frame was hacked away before the rebuild and transformation would begin. 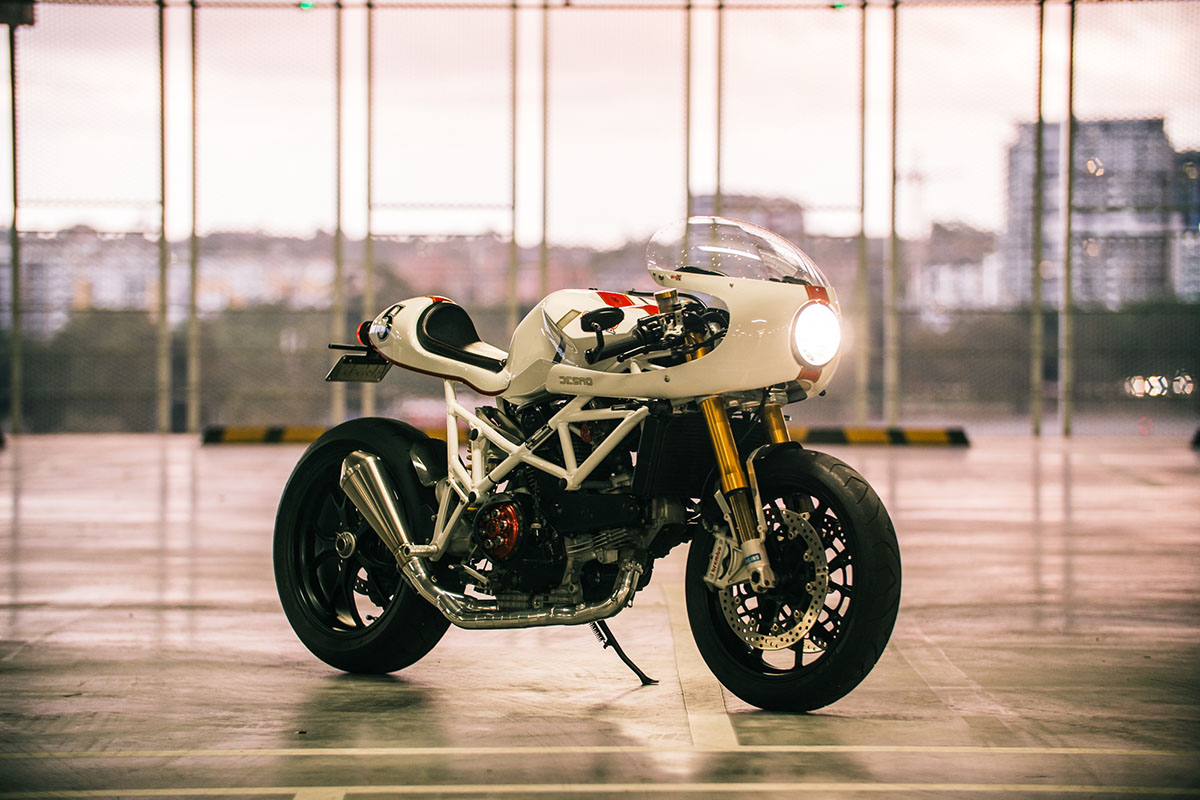 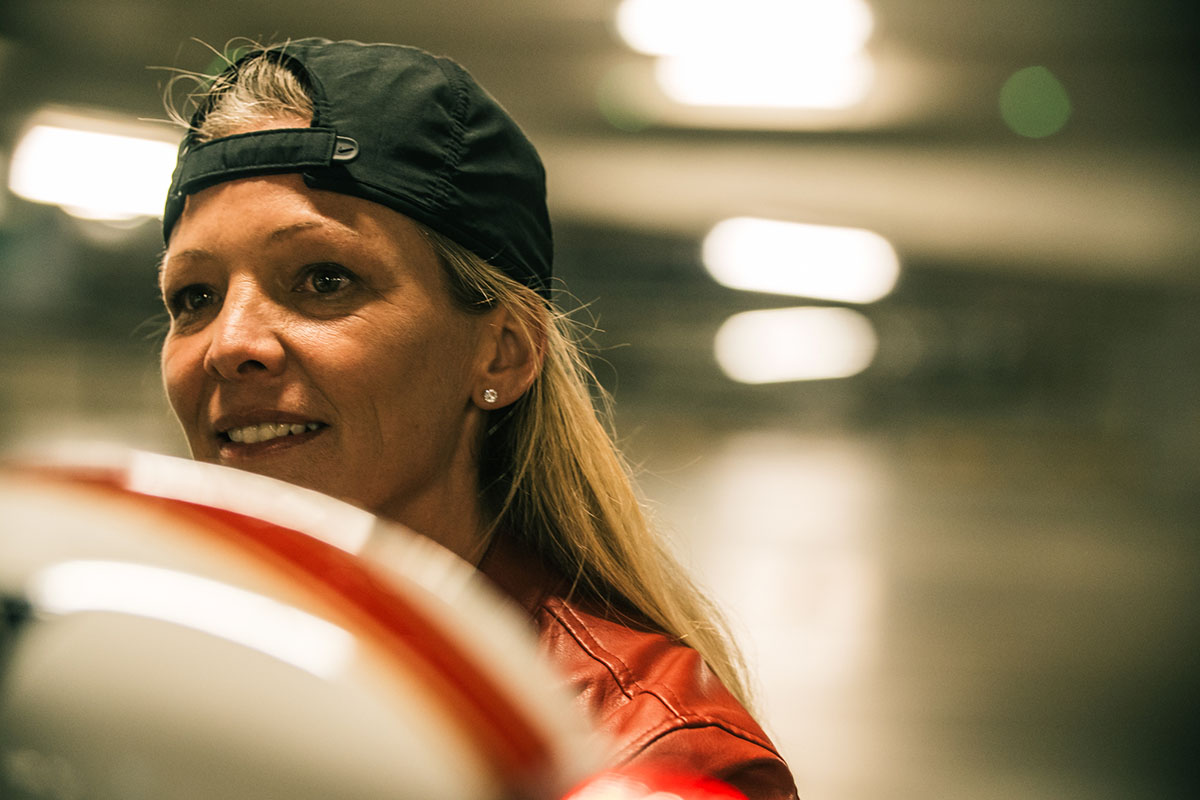 ‘I was pretty happy with the build,and loved riding it – but after some time went by I wanted a change. I couldn’t bring myself to put it on the market because the bike and I have made a real connection, so I decided to change it up a little.

I had a clear vision for the bike and spoke to a few people about it. Most said “don’t do it!” – They didn’t think the old styled bikini faring look that I wanted to add would work on such a minimalist modern machine. But I went ahead anyway.’ 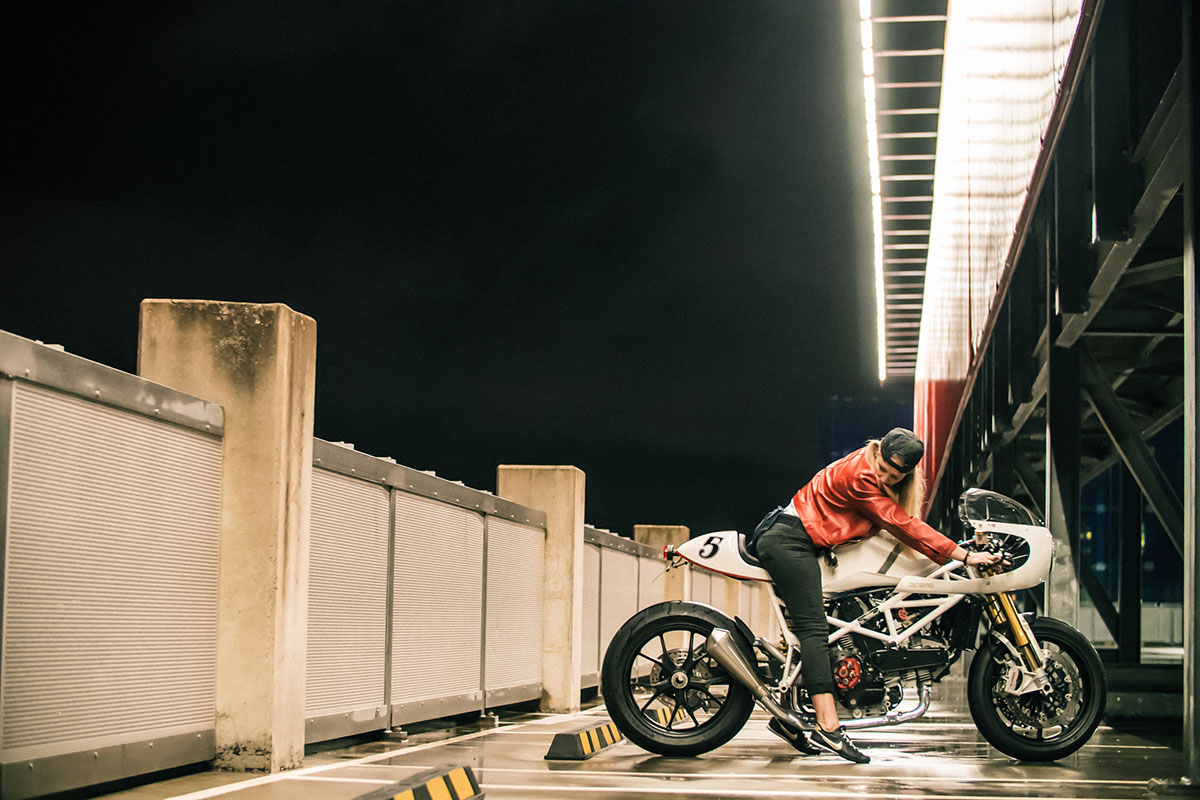 ‘I was looking for something similar to the 900SS bikini faring, but for the bike it would be too big and unbalanced. I looked at some of the Walt Siegel faring kits but in the end decided to go with a one off a 70’s Dunstall. I took the bike back to Shed-X . Jim flopped a mould from the what we think is a Dunstall and it was set up on the bike with custom brackets and clip-on handlebars. Exactly what I wanted!’ 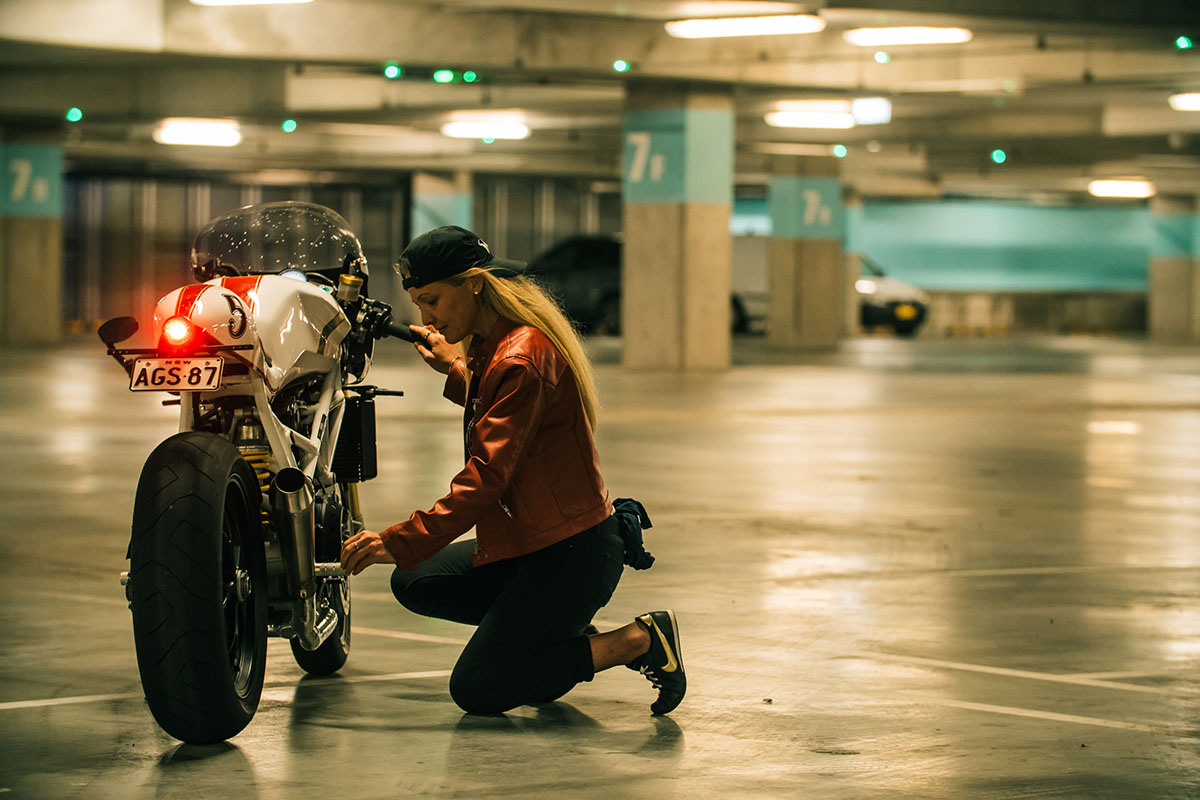 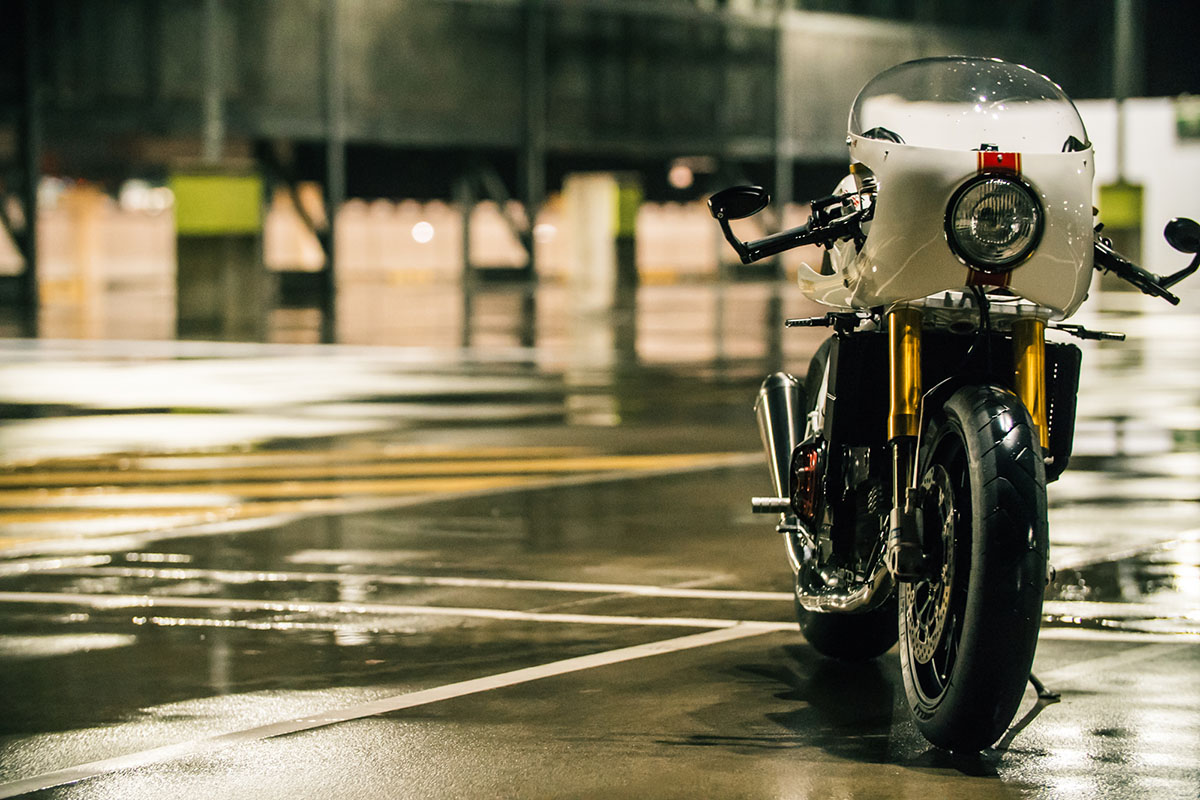 It was next that Fiona decided that whilst the faring was being re-sprayed, she might as well do the whole bike. ‘After a lot of thought about colour, I decided that I wanted to keep the bike the same colours because that is ‘El Bastardo’. It’s a well recognised bike, so I didn’t not to stray too far away from its original colours. I got Jim to freshen up the white and red, and put in a gold pinstripe with Ducati decals… Same-Same, but different!

The original custom stainless steel exhaust was also showing some coloured wear and was a punish to keep clean so I went ahead and got that ceramic coated. The cloth pad that was supposedly a seat was replaced with a more comfortable quality leather one with padding, and I’ve adjusted the height and suspension to better suit myself.’ 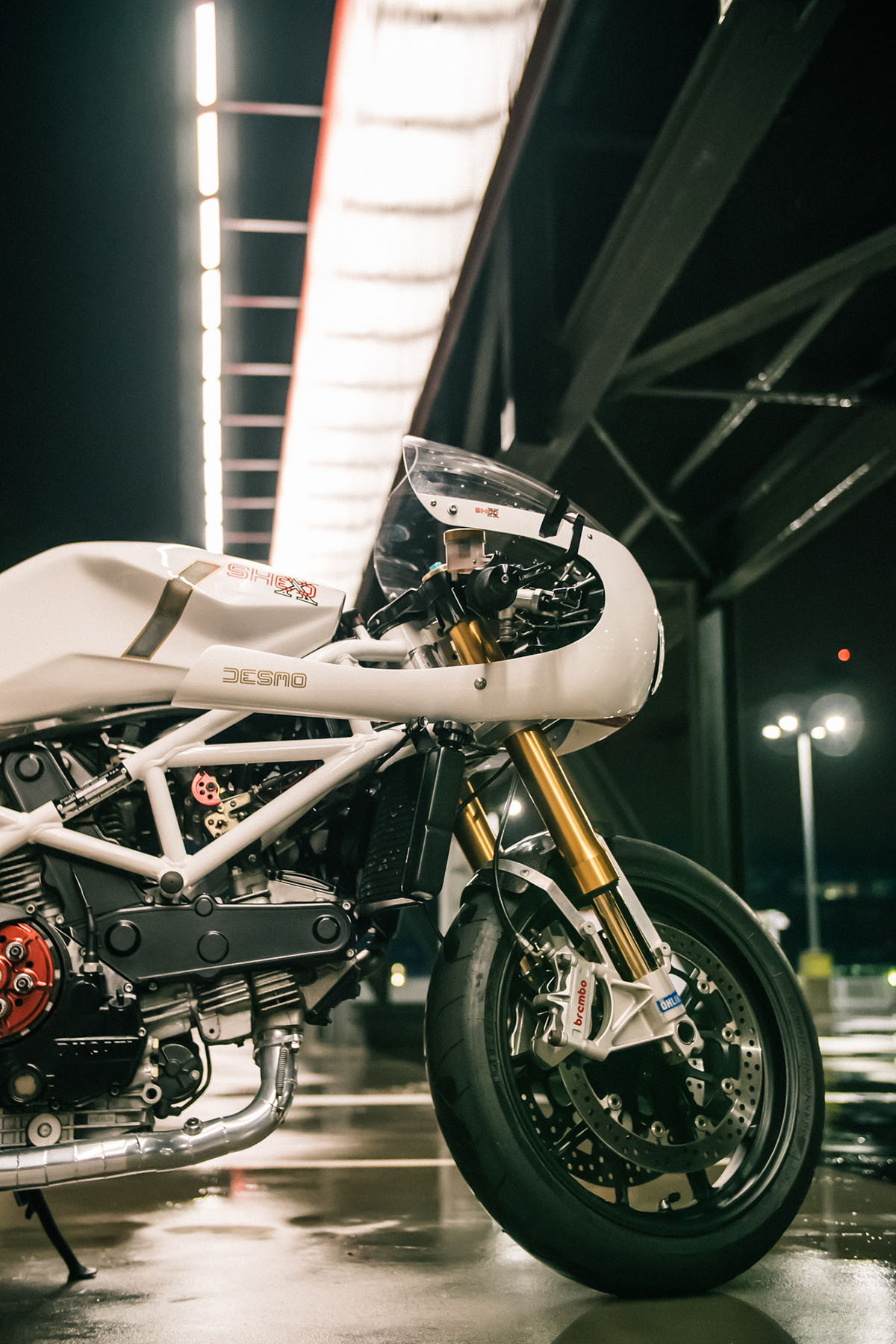 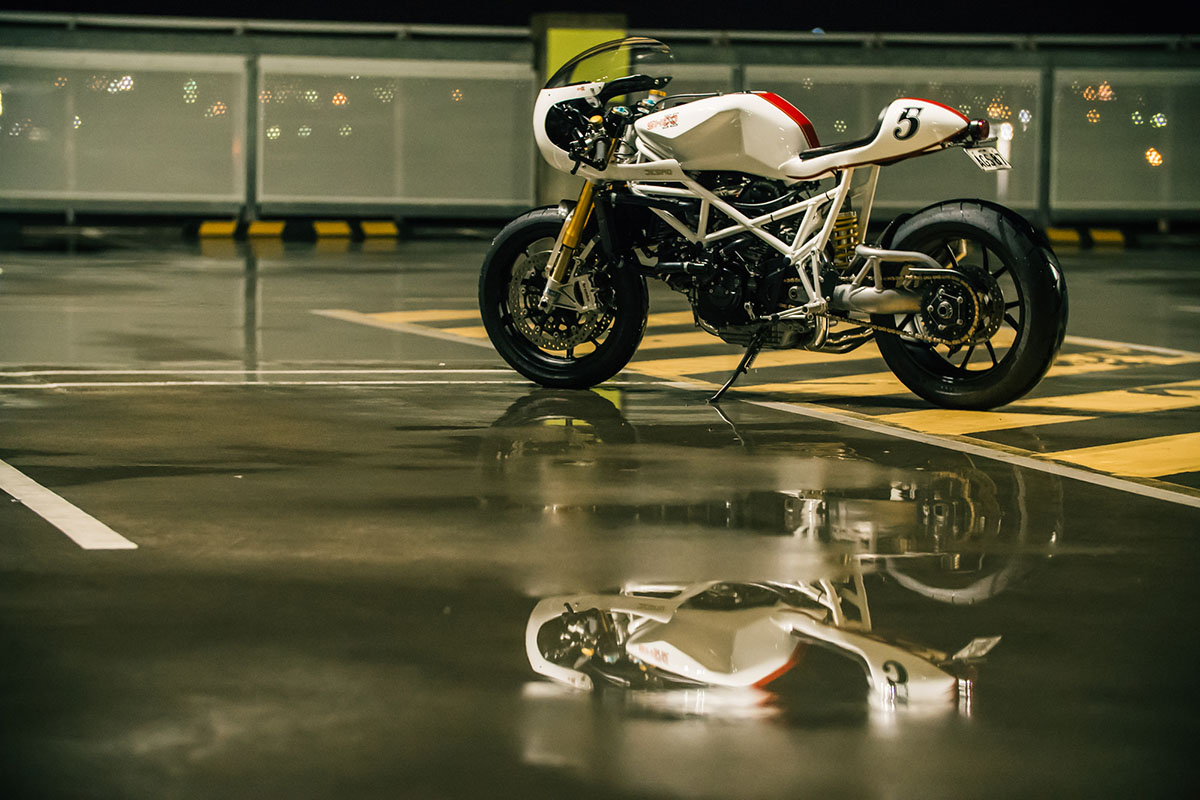 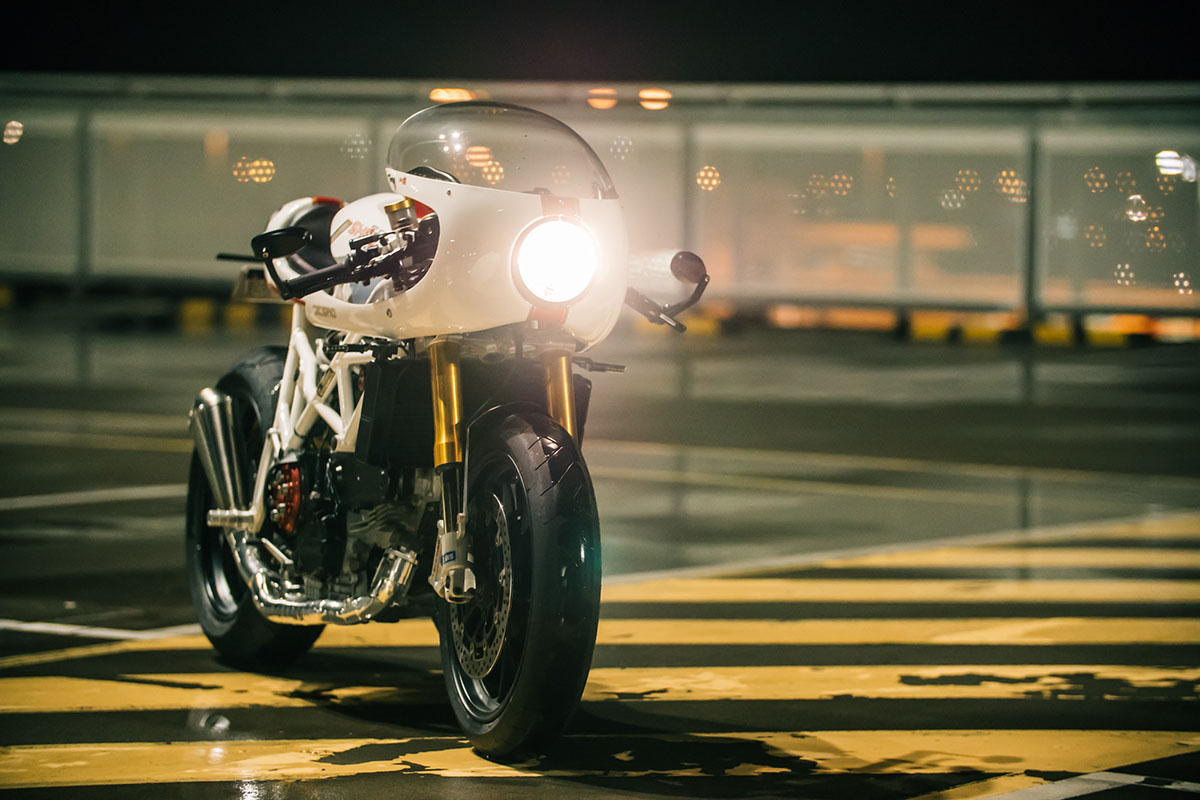 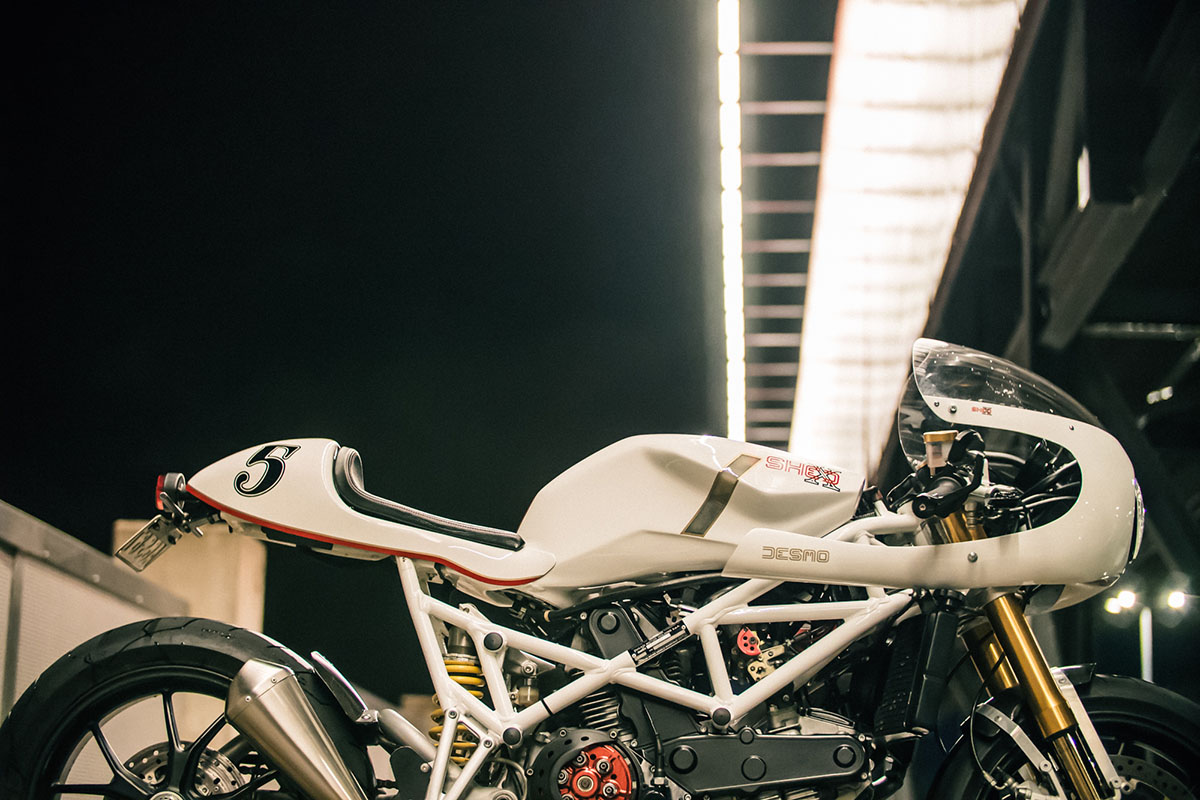