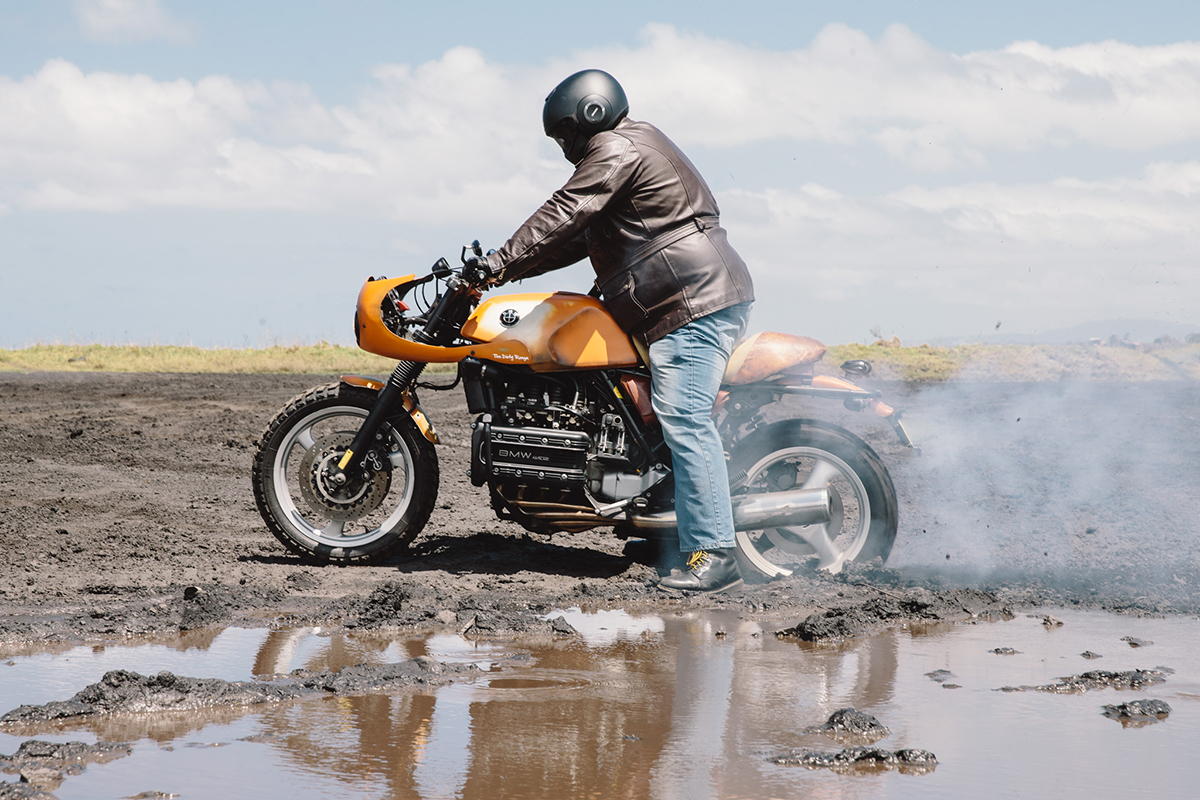 The BMW Big K series is no doubt growing in popularity in regards to custom builds these days. While these 265kg machines might not be everyone’s first choice when choosing the canvas for their build, it’s a machine that can be stripped down and turned into just about anything your heart desires. For Mark of Rewind MC, that desire was The Dirty Ranga. 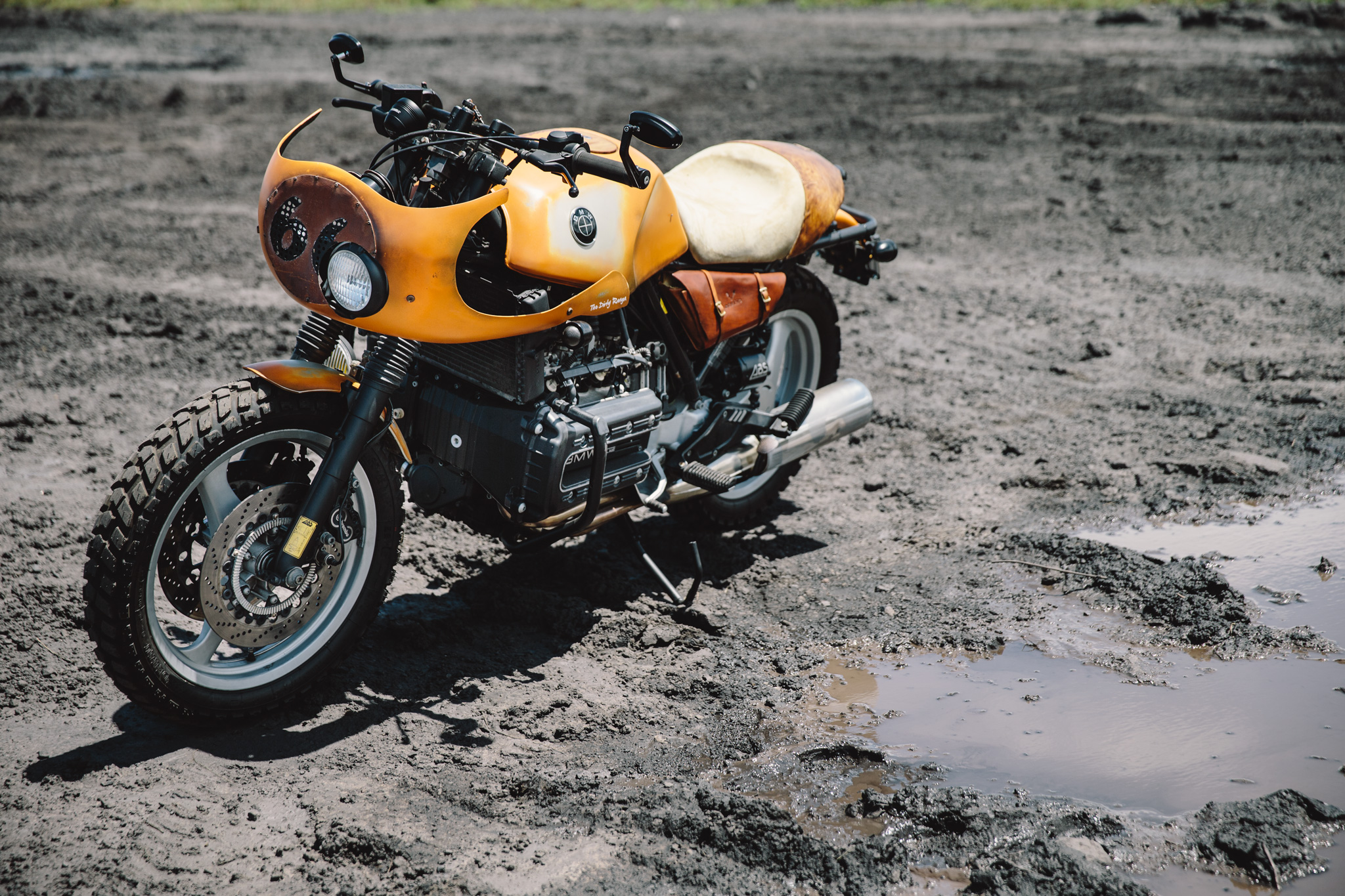 Mark’s relationship with these bikes goes a while back. Affectionately dubbed “the Big Flying Brick”, Mark owned his first BMW K100RS back in 1986. “What followed was no less than 5 more K series. From the Big Tourers to the Sports versions, I was racking up around 230,000km up and down the East Coast. You could say I have a soft spot for the model – it was inevitable that one day another would come through my shed. The idea for this build was a big, Café Racer/ Desert Sled style bike that could do the long distance rides with luggage and a pillion. It also had to be fast and nimble enough to enjoy all the glorious back roads Australia has on offer. What better base to start with than one of the best Sports Tourers of the 90’s!” 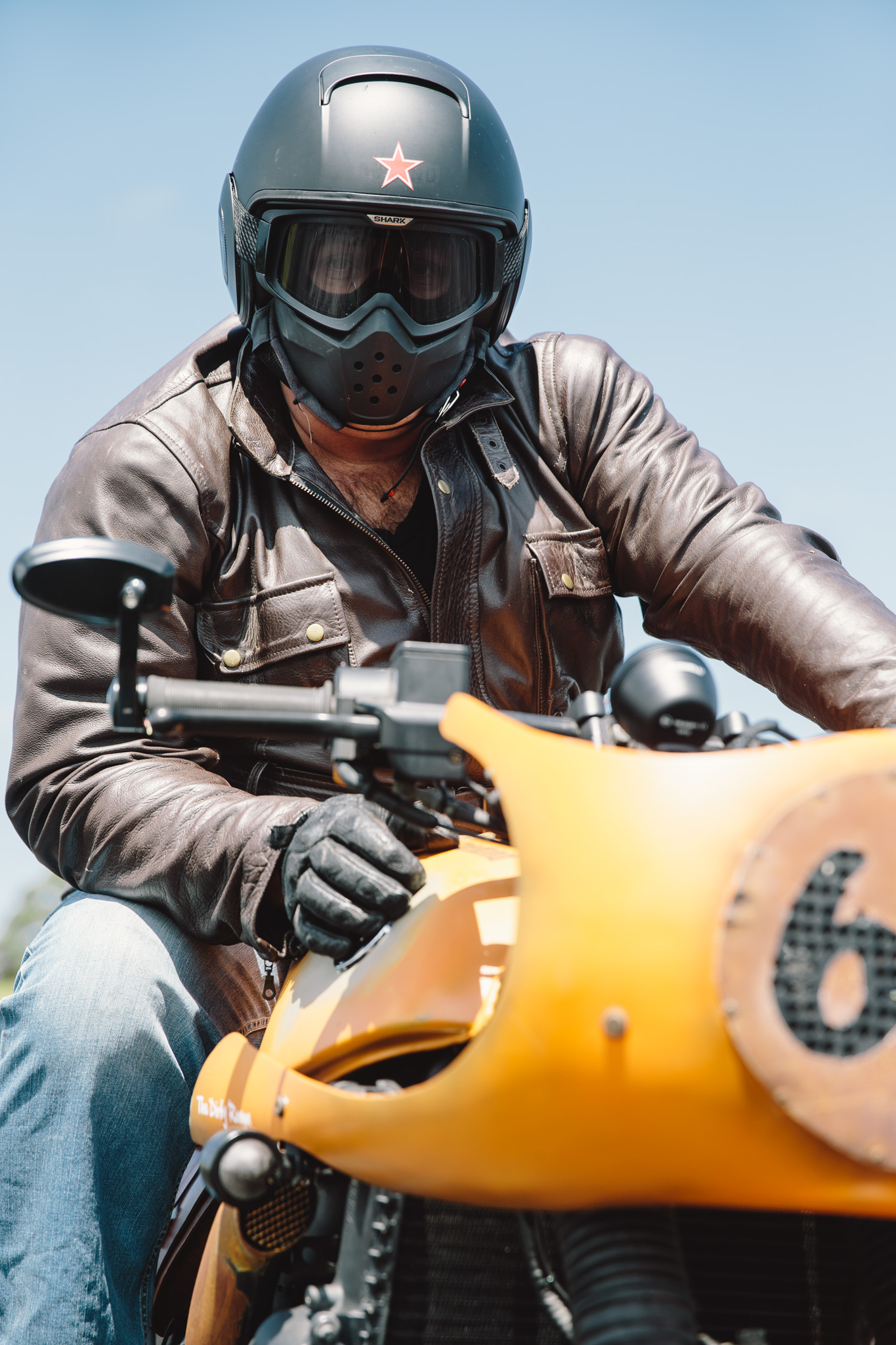 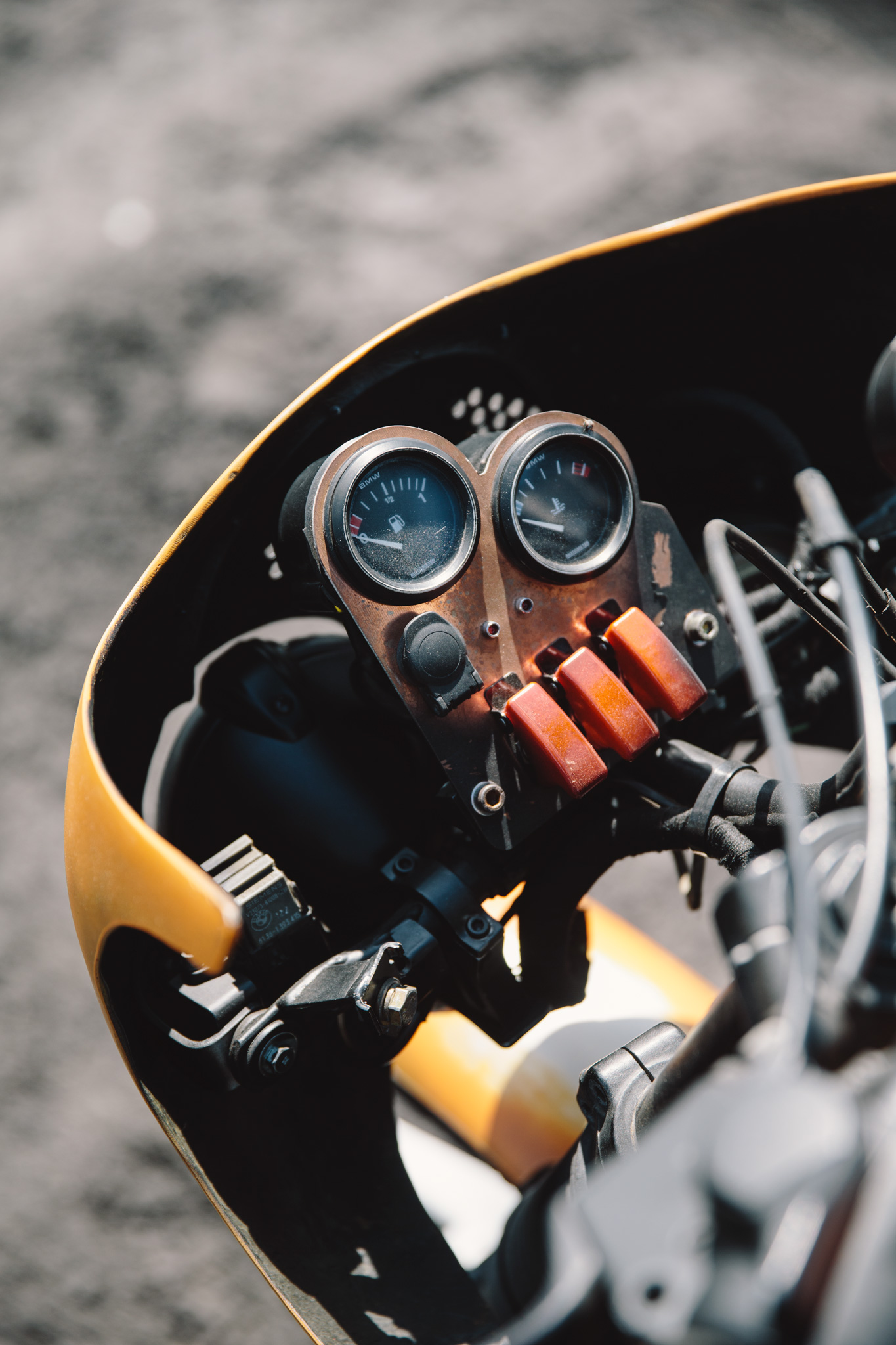 And so a 1992 BMW K1100LT SE would be picked up, and the stripping down would soon begin for this buxom Bavarian beast. The aim for this build would be to create a machine that would be a jack-of-all-trades. It would need to be reliable, happy to go long ranges, comfortable with a ton of luggage and a pillion – whilst also being able to smash through all the twisty back country roads. “The first job was to strip off all of the fairings and plastic – which would end up being enough to house a small family. The mounting paints for luggage and panniers were left in place, with the rear sub-frame being unmolested so both the luggage and pillion seat options were still operational” 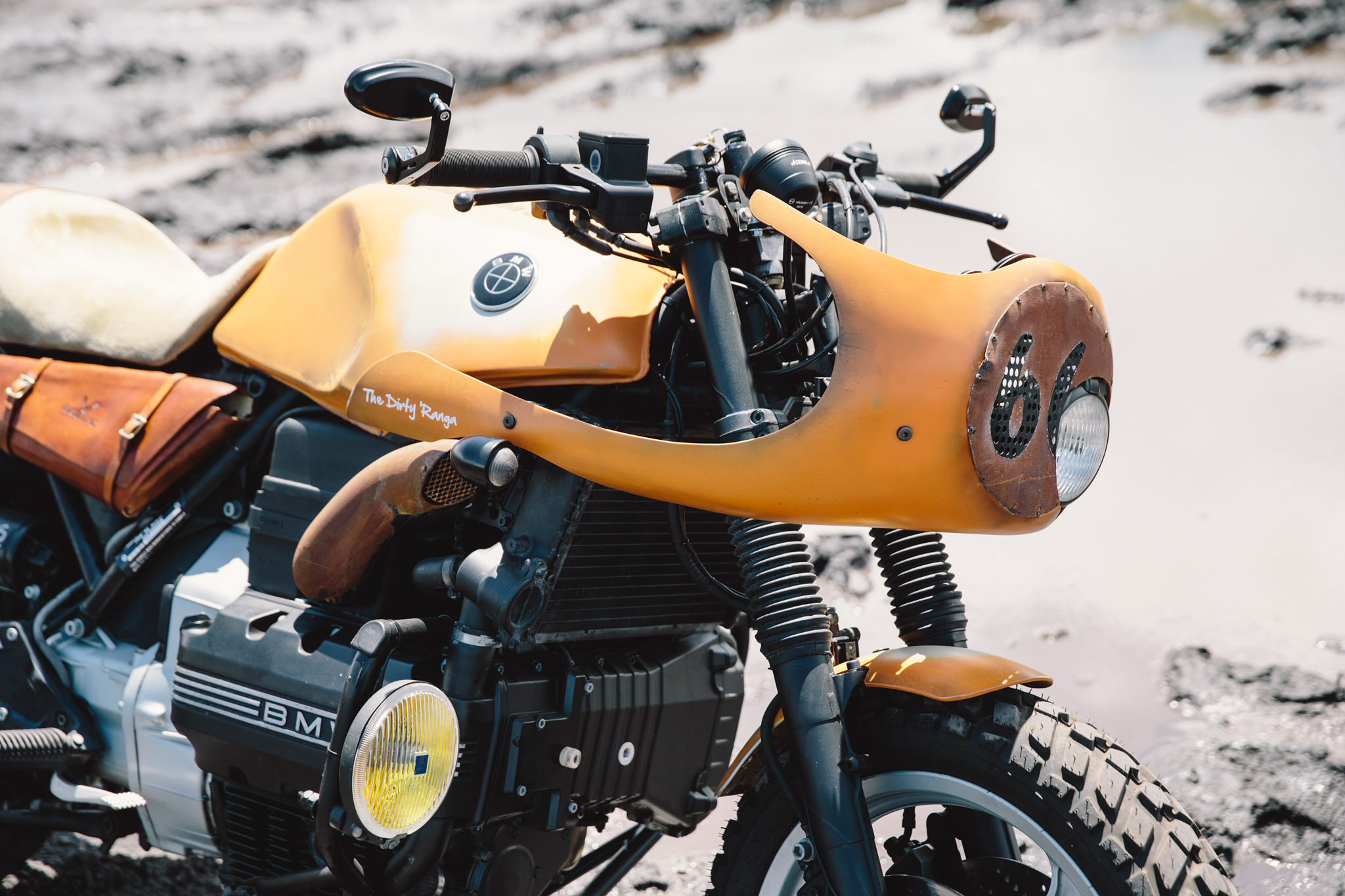 The bones of the Big K bikes are strong and sturdy, providing an excellent base for Mark to work with. “The K1100, as opposed to the K100, is a better bike all-round. The brakes, suspension, shaft drive and handling are all much better. The turbine smooth torque loaded 16v flat four engine is also incredible. The induction set up and electrics were then tidied up and left in place to make for all weather, reliable touring. The lounge chair seat was chopped and shaped, with plenty of padding still left for those long hauls with provision for a special pillion under the removable, shaped leather Rear cowl.” 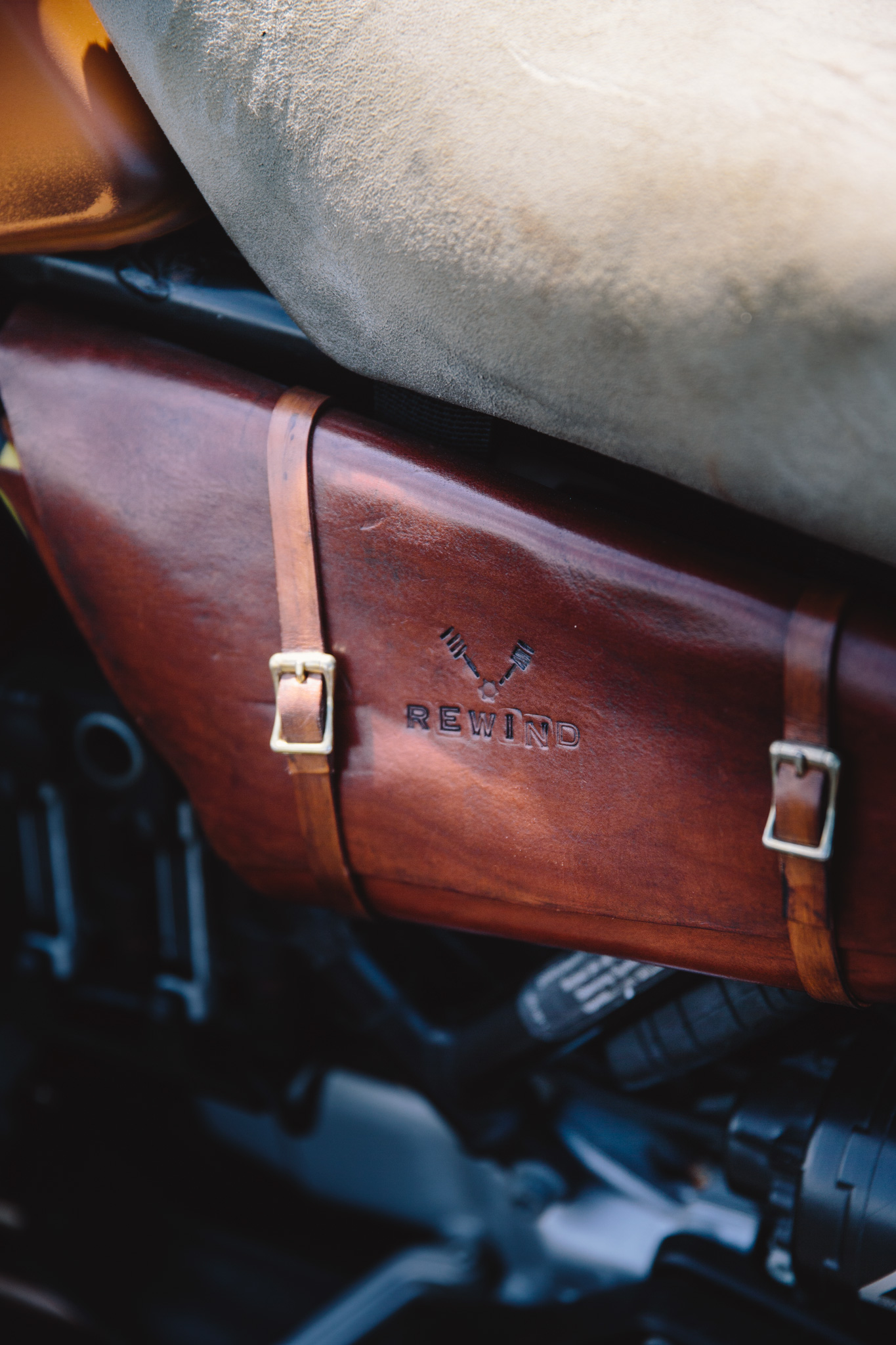 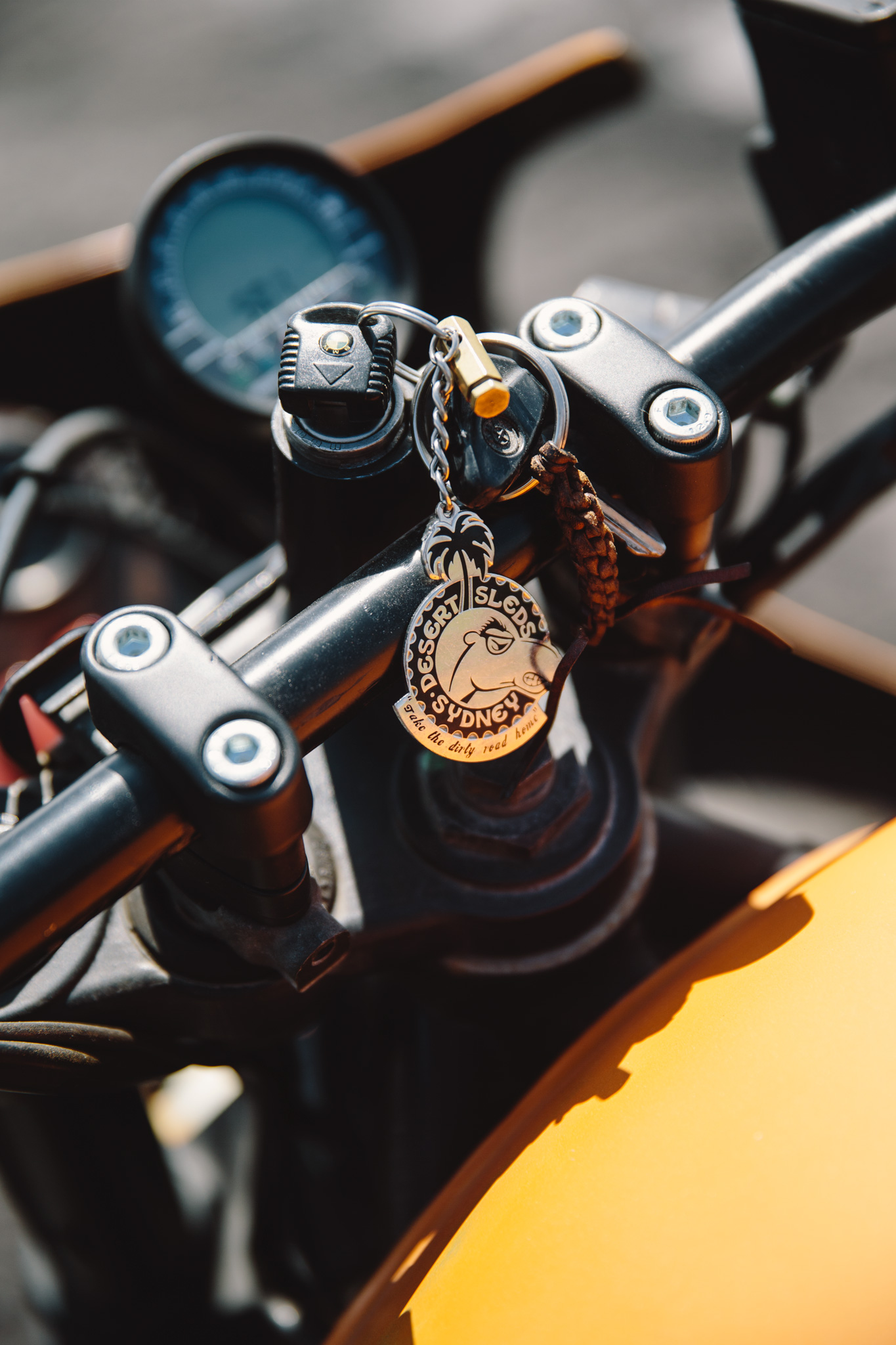 Something different to the Café norm, the seat was covered by Mark in soft deerskin leather. “It feels great, and deerskin is unaffected by rain and the elements unlike other leathers. Thanks Bambi!” A redundant Ducati 900SS fairing that was sitting in the shed gathering dust would be then put to use to solve an issue Mark found with K series builds. “You have to find a solution in regards with what to do with the tank and cut outs up the front. The fairing extends neatly back, and covers that particularly ugly part of the bike. The top of the fairing was chopped and trimmed with the normal SS screen left out. This meant that I could mount wide, flat drag bars with a slight lift. The riding position as a result is somewhere between touring and sports touring – ideal for me as a big tall unit!” 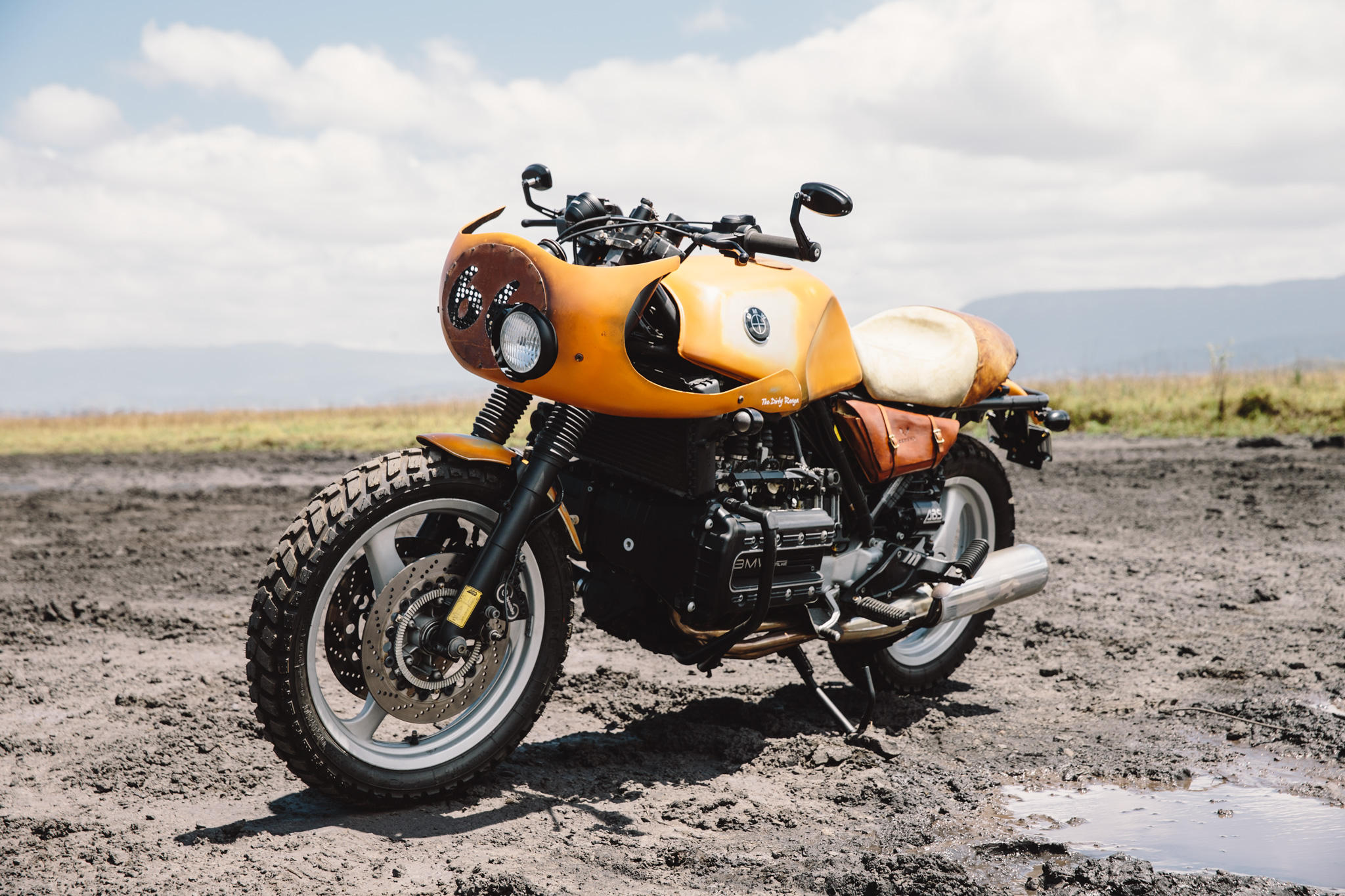 As per the bike’s name, The Dirty Ranga was covered in an aged, distressed flat orange scheme. Emblazoned across the fuel tank is “Das hassliche rothaarigen Stiefkind”or, The Ugly Red Headed Stepchild in German. “All the paintwork was done by myself and was based on the BMW concept 90, and the burnt orange superbike schemes of the ‘70’s.” 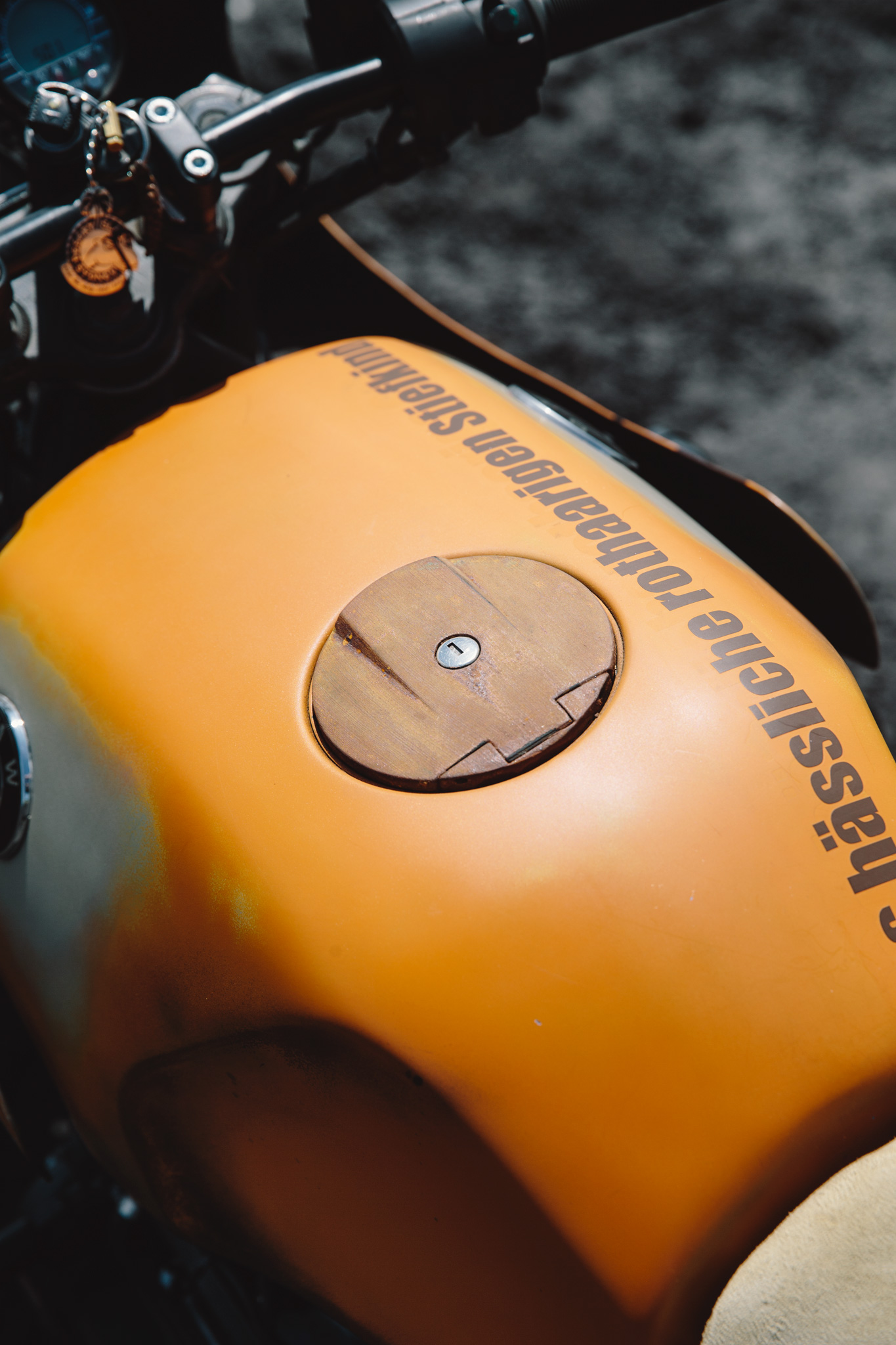 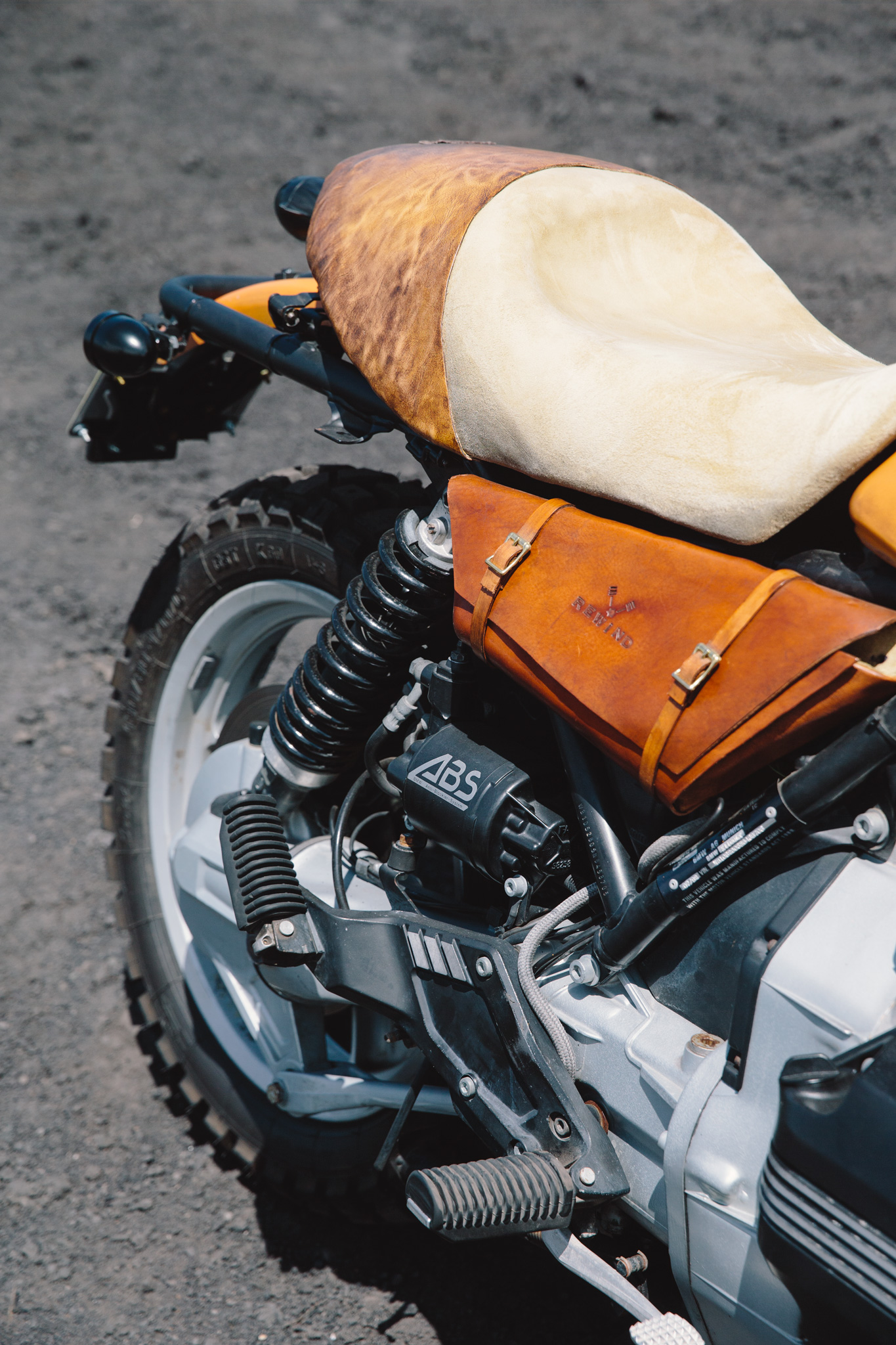 “What I like most about this bike? There’s a few things really. The long, lean stance of the Ranga as she sits there. That flat four motor has never been pretty, lets face it. The long slim fairing, combined with the long, exposed rear sub frame stretches the bike out. With most K builds you’ll see more of a stubby nosed custom or streetfighter look where the engine becomes a feature. The long lean lines of the Ranga seem to mimic the engine lines and bring it all together.

The almost industrial, unfinished look of the triple and all the bits attached to the engine cry raw to me, “leave me messy and honest”. I love the offset headlight and instruments, a fairing that looks familiar but not. People that know me, know that I like things to be odd.

Check out more of Mark’s work over at www.rewindmc.com.au 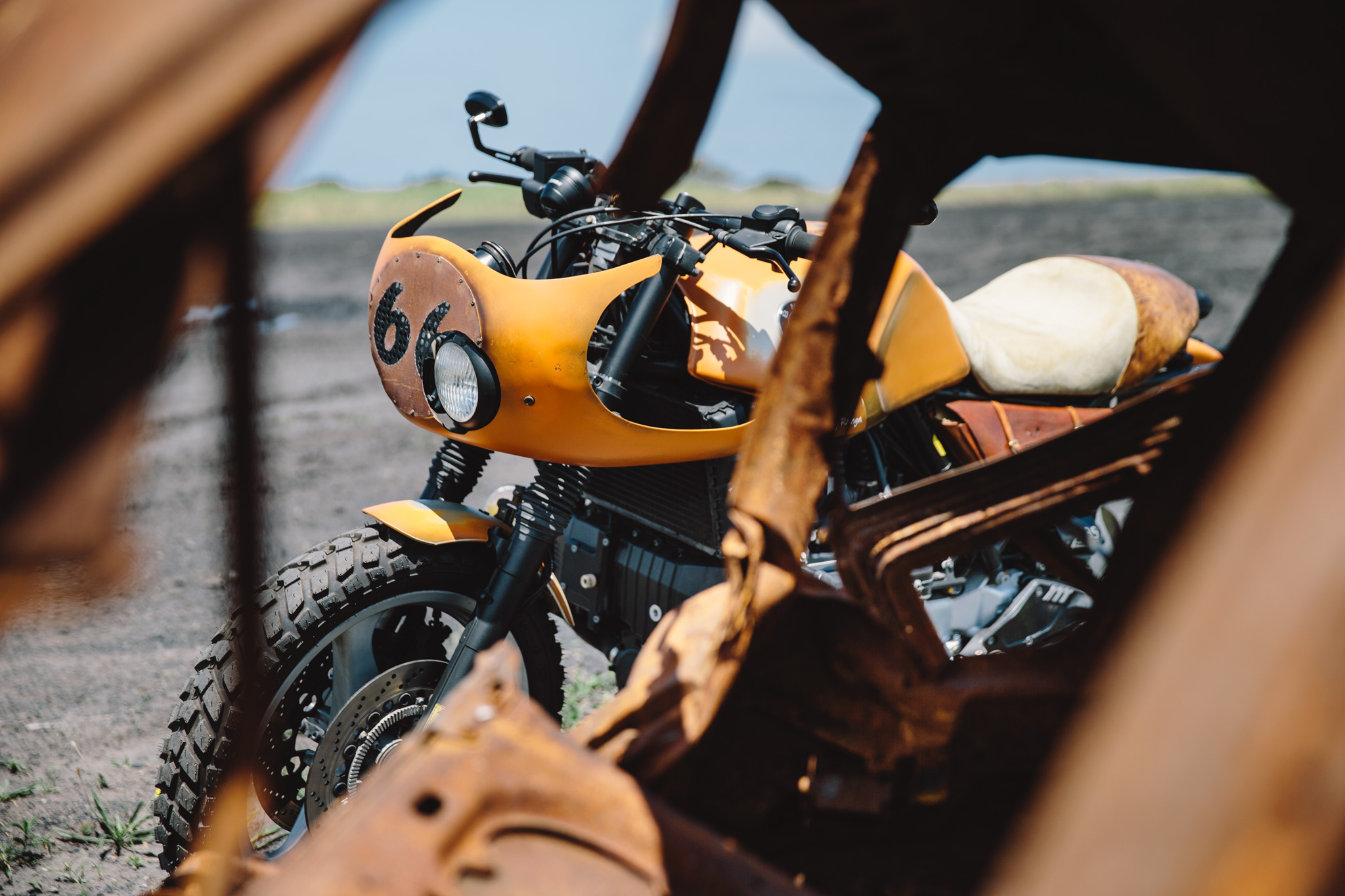 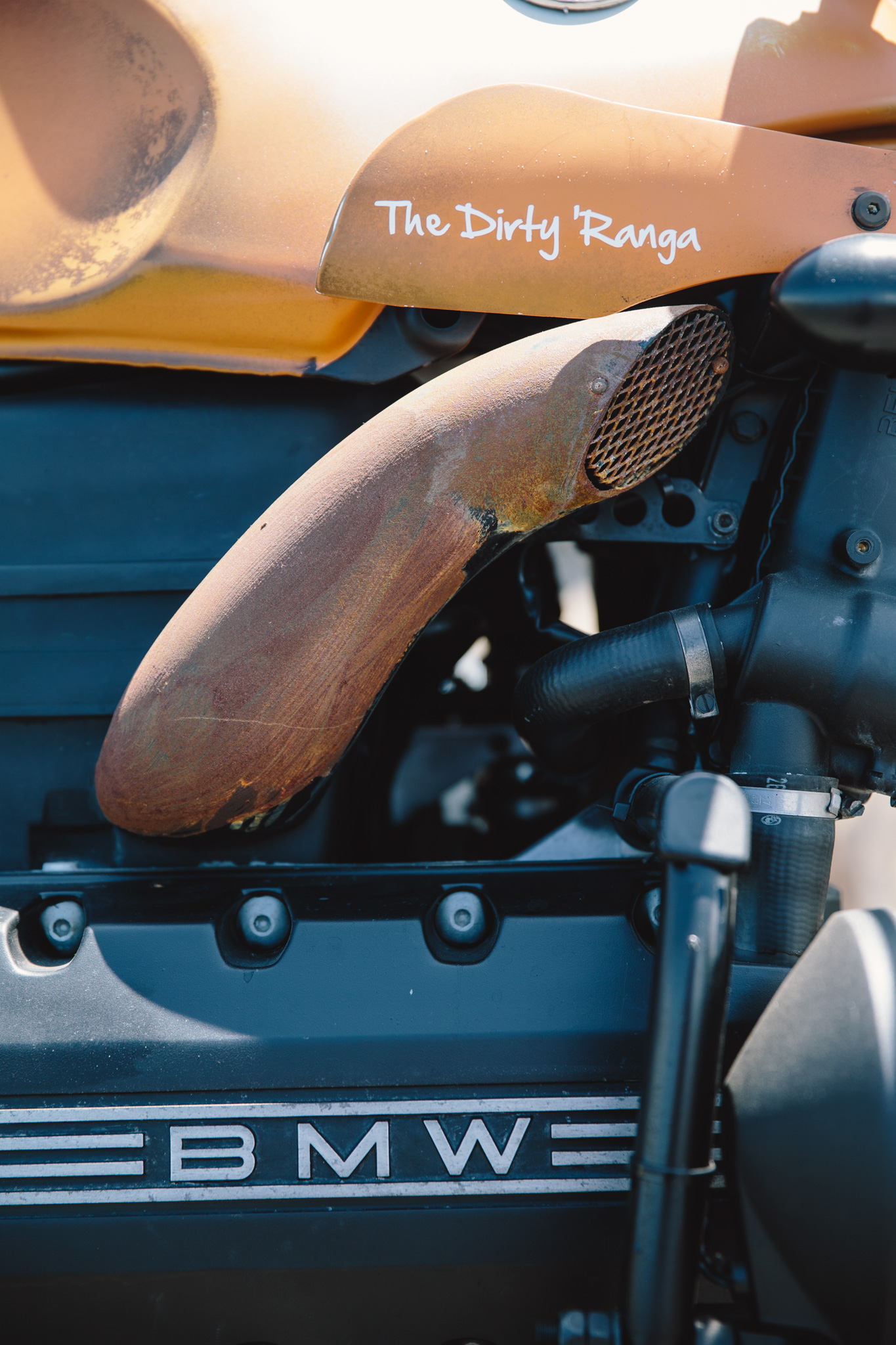 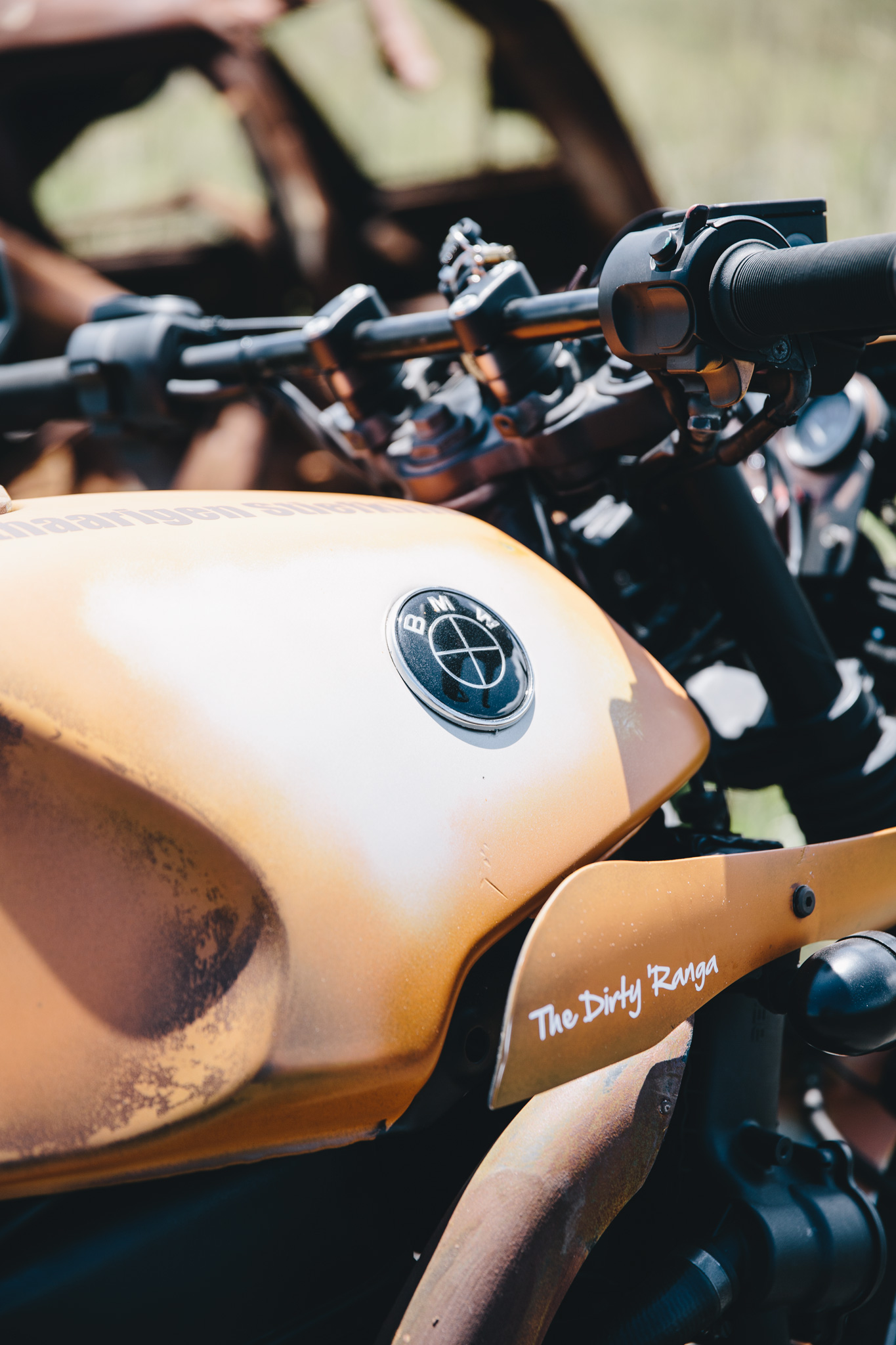 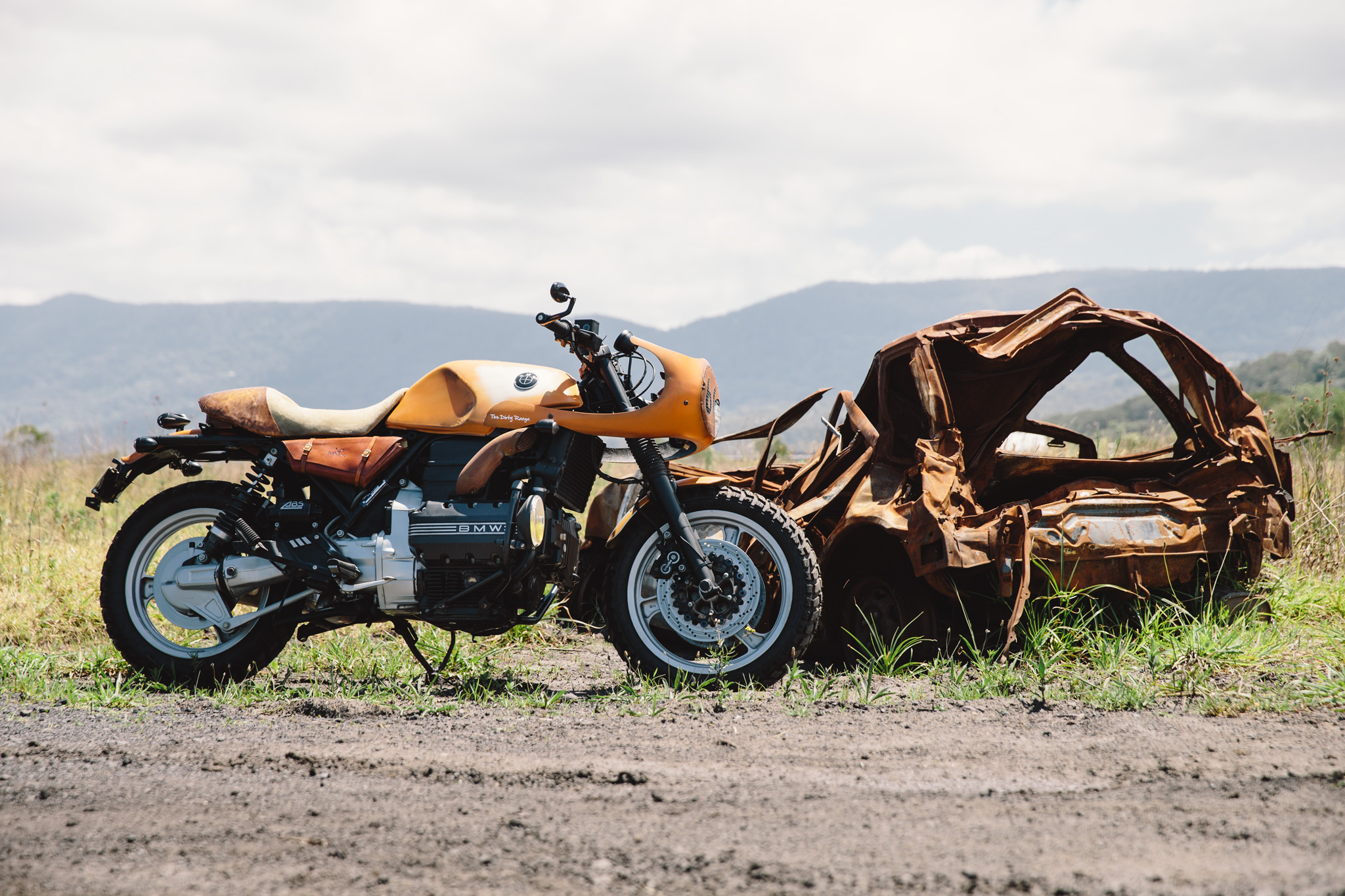