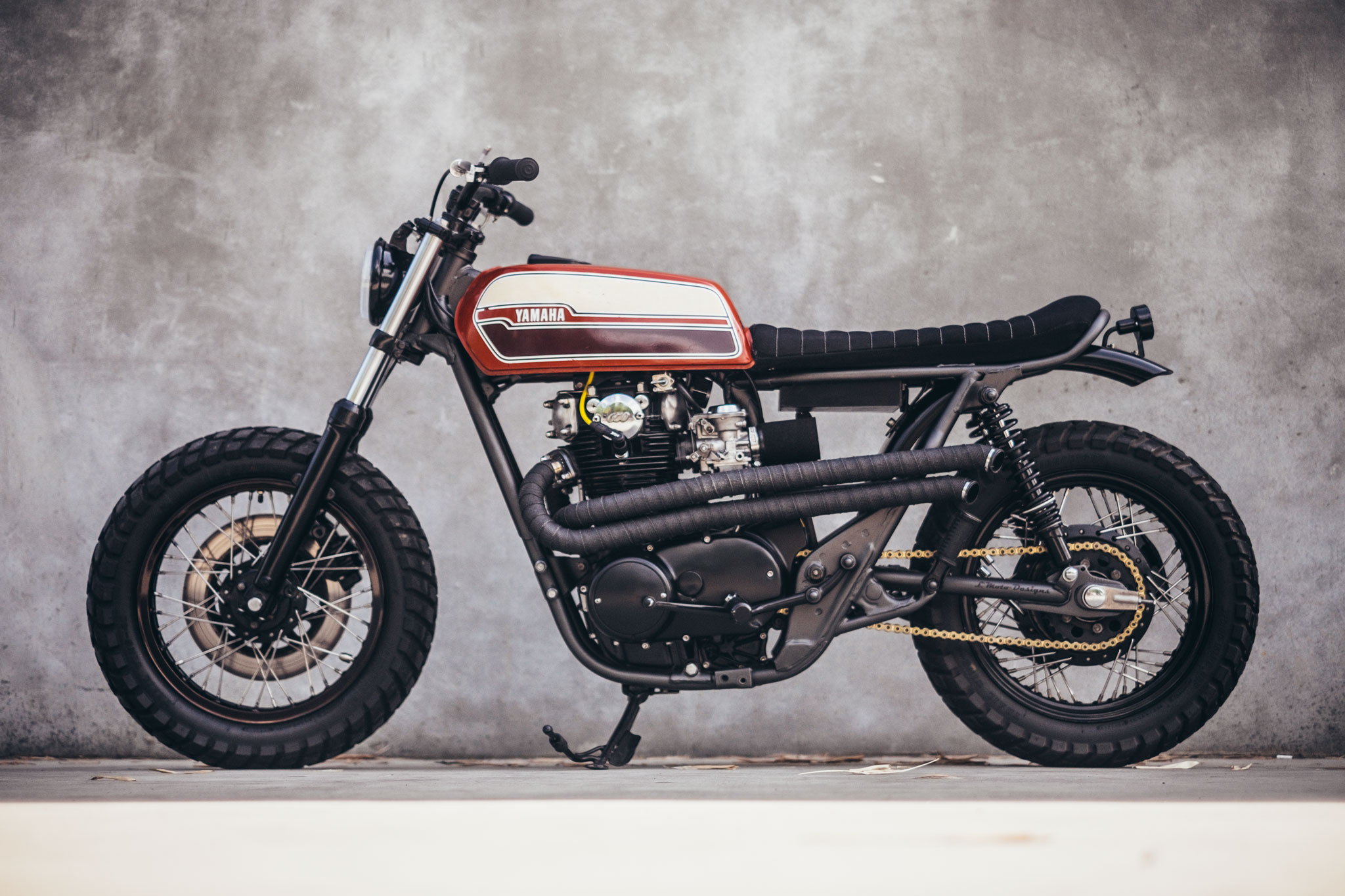 “Don’t call me Minabear!” screeched the fire-haired young lady at James. She was clearly blessed by some recreational substances – but none the less, with that name James’s ’83 Yamaha XS650 had now been dubbed. This chance encounter with a stranger on the street would be the perfect match for this vagabond machine and it’s adventures. 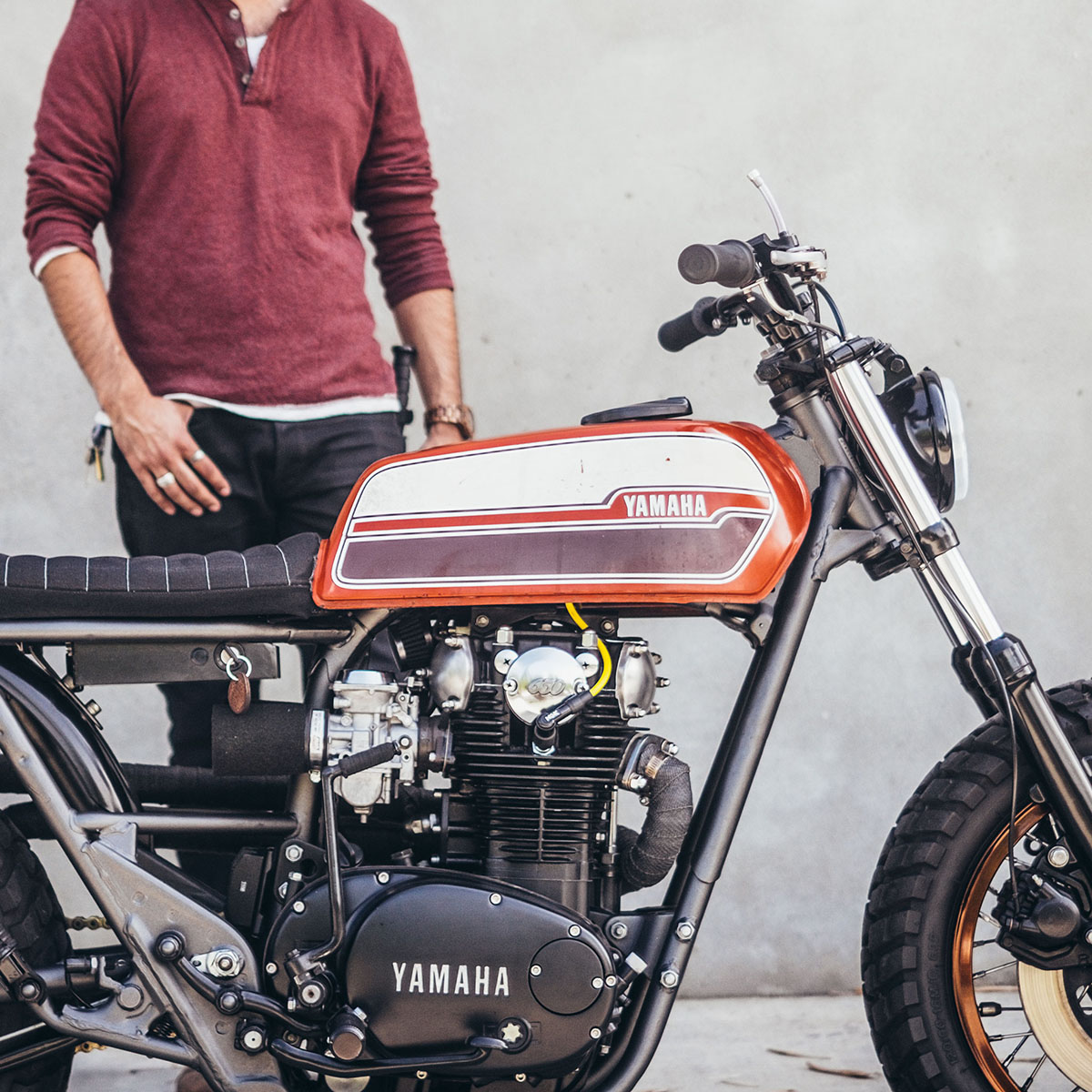 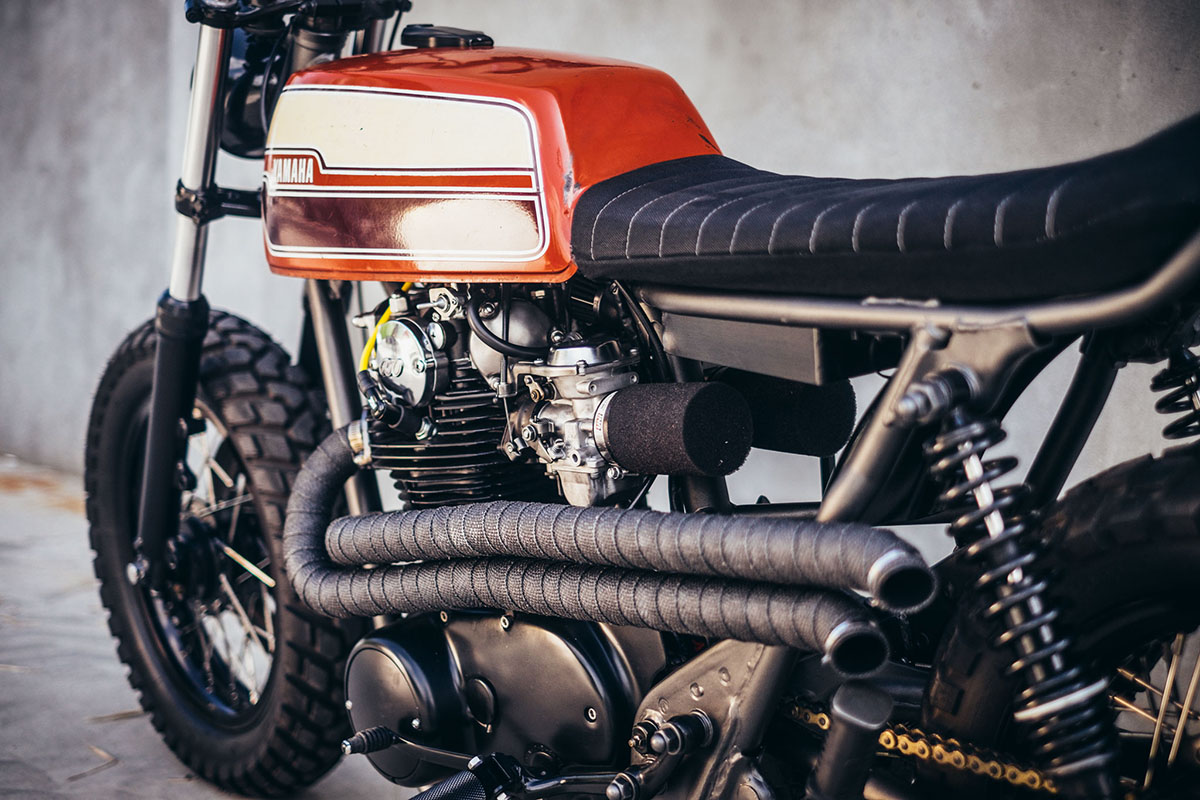 Growing up in Illinois, James had a ton of space to kick about on as a kid. With his buddy next door owning two Honda Express 50cc mopeds, the opportunity for adventure was ripe. “We’d race those things around our connected yards, jumping into the ditch off the drive way and bashing into each other along the way. We’d break these machines; then scavenge parts off of a donor moped, fix them up, and get back to race bashing.” Bigger bikes would now follow, as nature intended. “Left to my own devices, I scored a sweet deal on a `71 Suzuki 125 Enduro for 25 bucks at a garage sale down the street. It was caked in mud and grease, and had been sitting for nearly 20 years with flat, rotted out tires. Naturally, I forked over some of my lawn mowing money I had made that summer and dragged it home.” 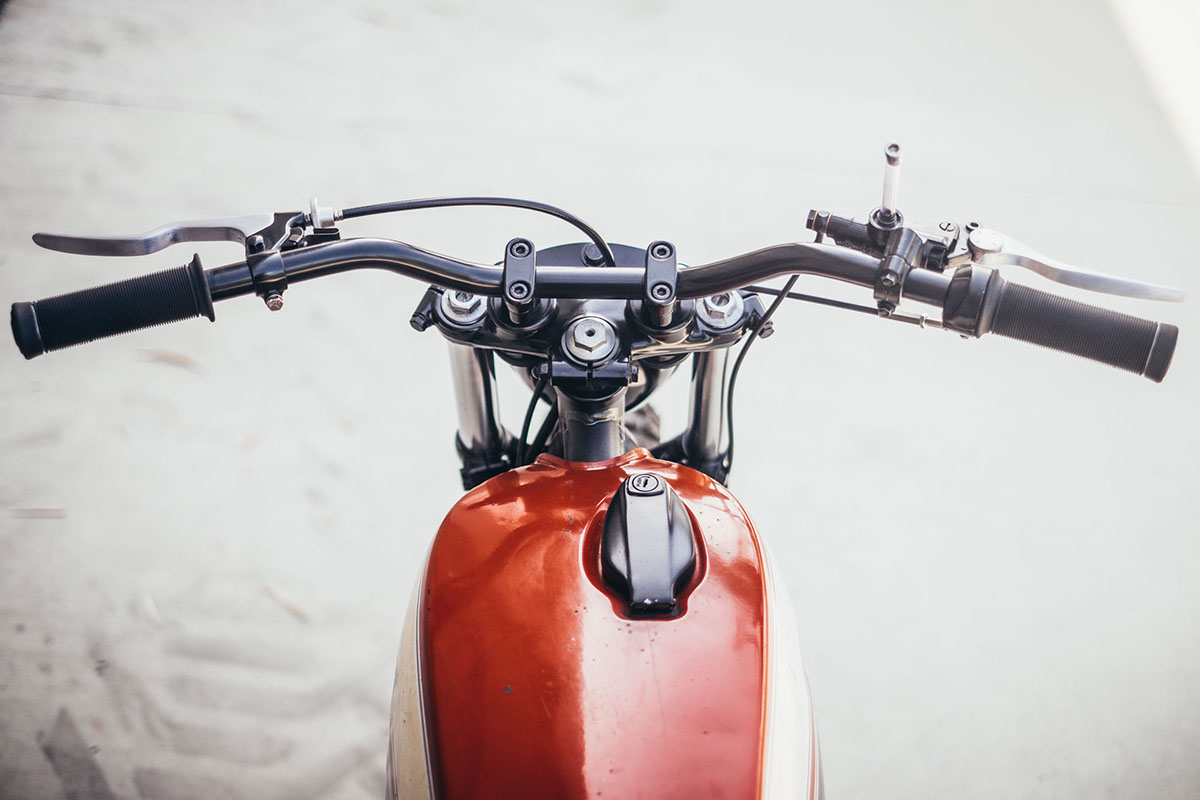 With this truly decrepit new (read: old) bike sitting sullenly in his family garage, new skills were to be learned in order to get it running – if it would ever run again. Fortunately for James, his Dad – like all Dads, was handy and was able to donate some knowledge upon the young wrencher. “My old man showed me how to rebuild the carb. I then put some new tubes and tyres on it, a fresh spark plug and oil. Sure enough she fired right up! I rode that beast for the next seven years or so. I kept up on maintenance and fixed things as I broke them, pushing that old bike harder than it was ever intended. I ended up selling the bike to a friend and moved out west. He still has that bike, and rides it to this day around his farm.” 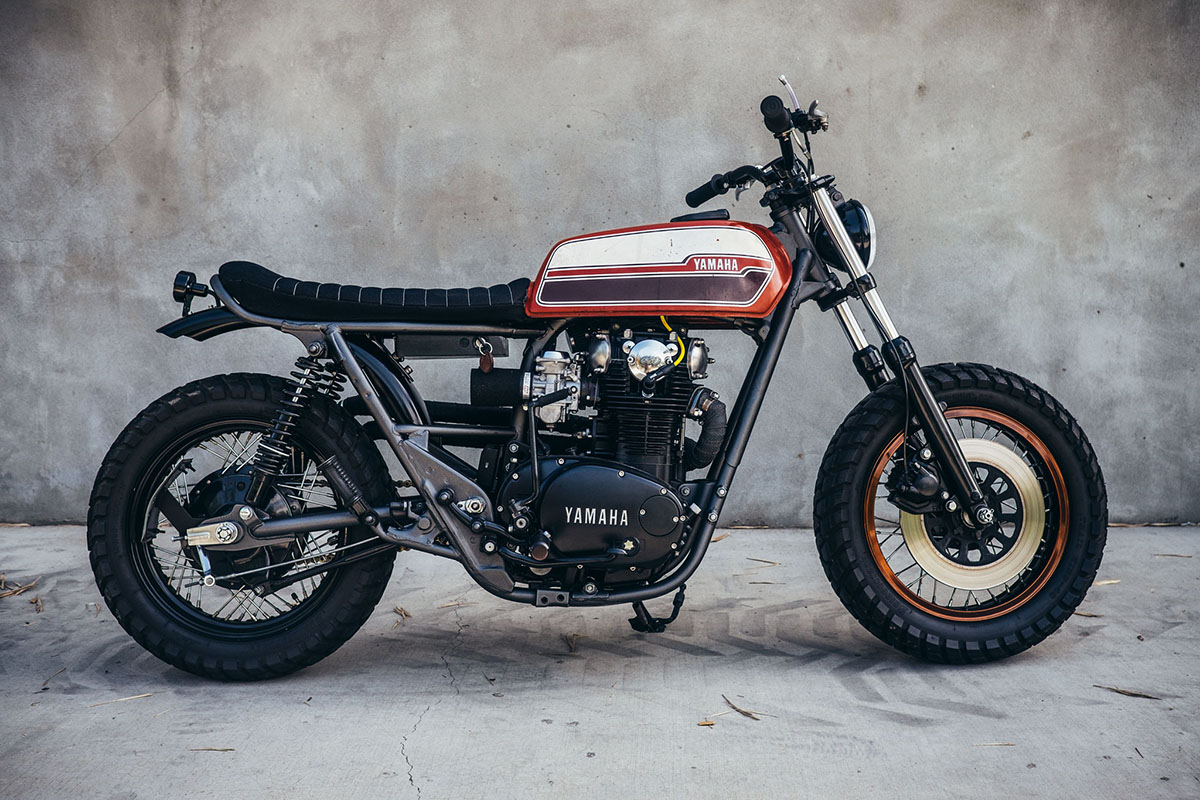 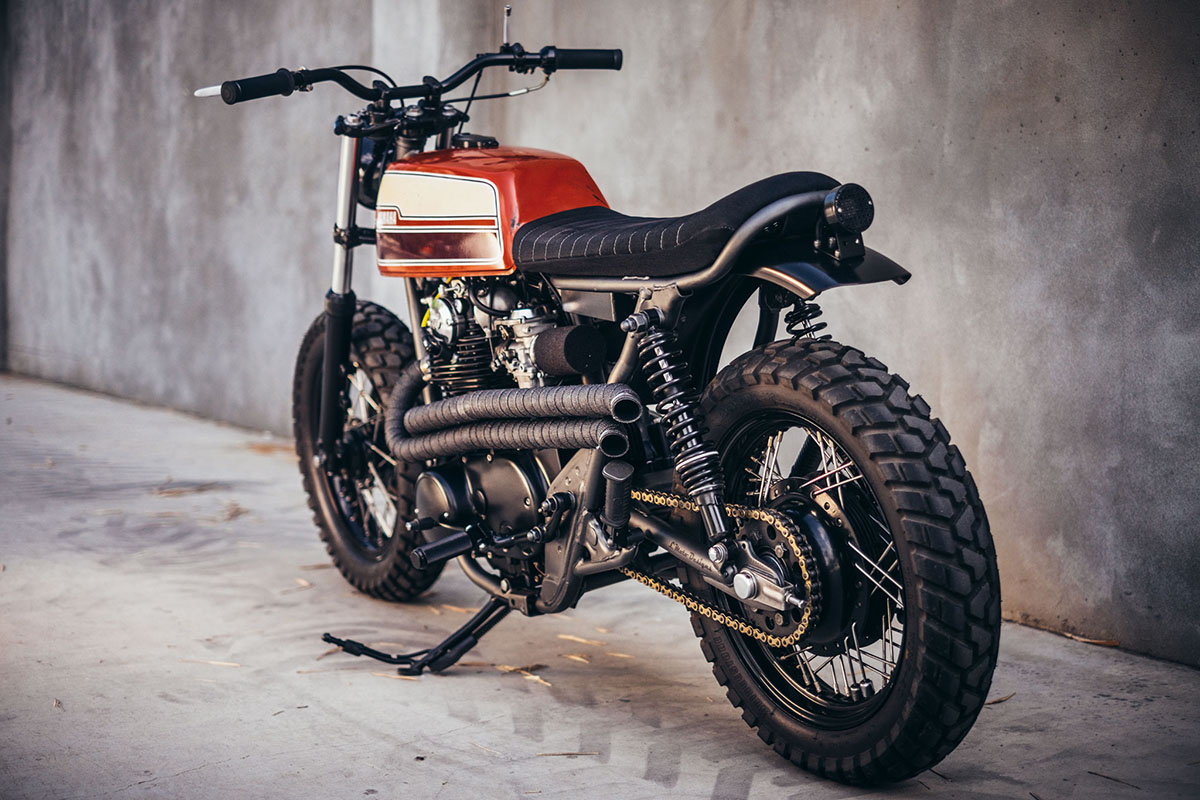 Since this James has beaten about on just about all styles of bike. Everything from Modern moto cross bikes, vintage enduro’s, sports bikes, you name it – he’s fanged it. Then he came across this particular machine in question, his 1983 Yamaha XS650. “This bike has been a group effort between a very close friend of mine and myself. I had wanted to do a full ground-up custom build for a while now, and my best friend Luke had this crusty old 650 he’d been riding around for the last few years that was in need of some TLC. Having just moved to the city, I felt this was the perfect opportunity to put together a custom motorcycle to showcase my work, and help my friend get his wheels done up the way he had always wanted at the same time. So we went over everything he wanted, set a budget, and I got to work.” 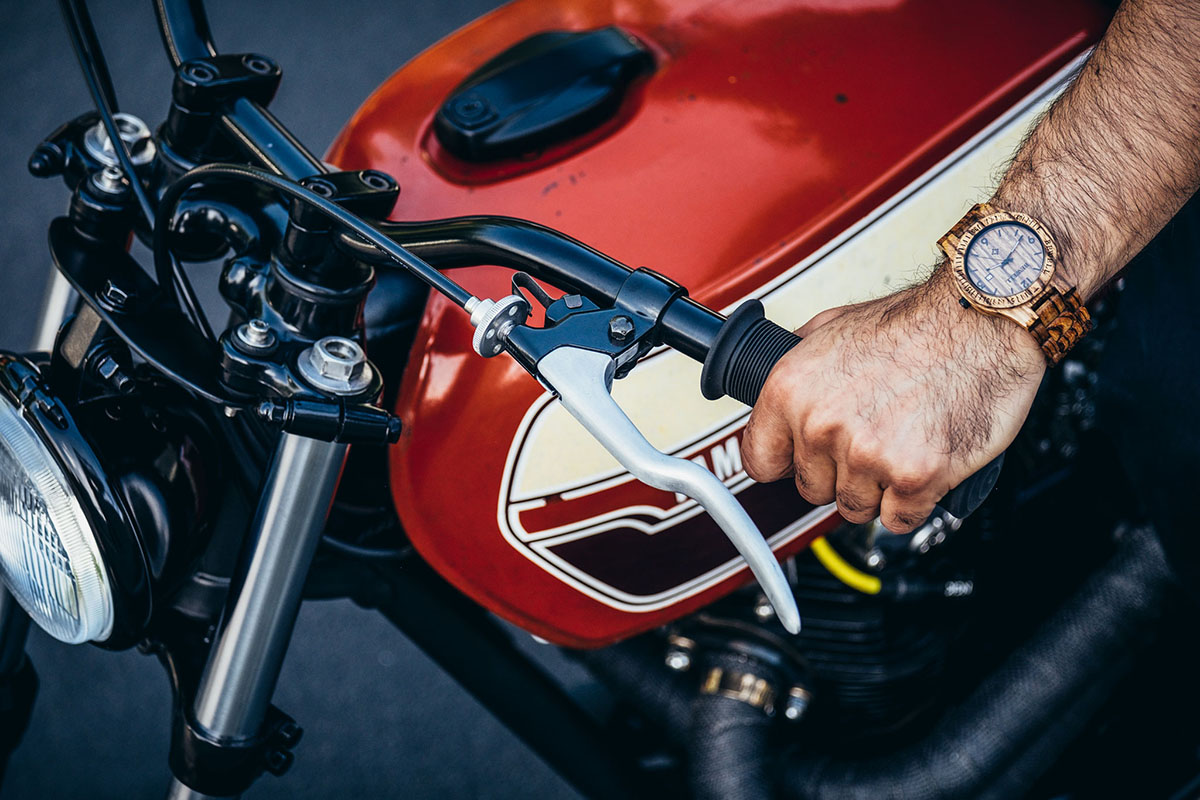 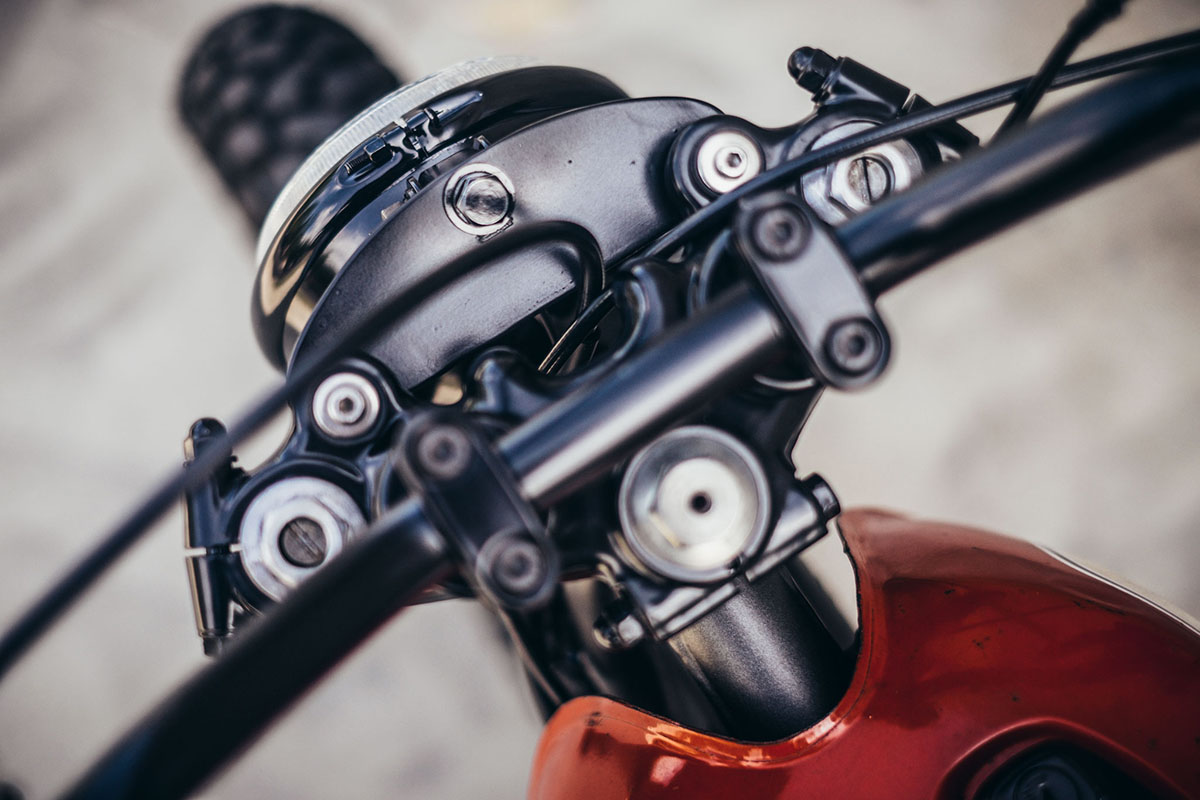 This bike had originally been picked up stock a few years back, before having some brat style mods applied to it. “He swapped his factory tank straight up with a friend for that cherry XS400 square tank that sits on it now. I keep saying he stole it. He changed out the bars, rims, and some bits here and there and basically rode it. He wanted a dual purpose type of bike that he could commute to work and hop around the city on, but one that would also keep up on the dirt trails and fire roads we often find ourselves tearing down on camp runs. So, staying in line with his needs, I kept the build in the direction of more of an urban scrambler.” 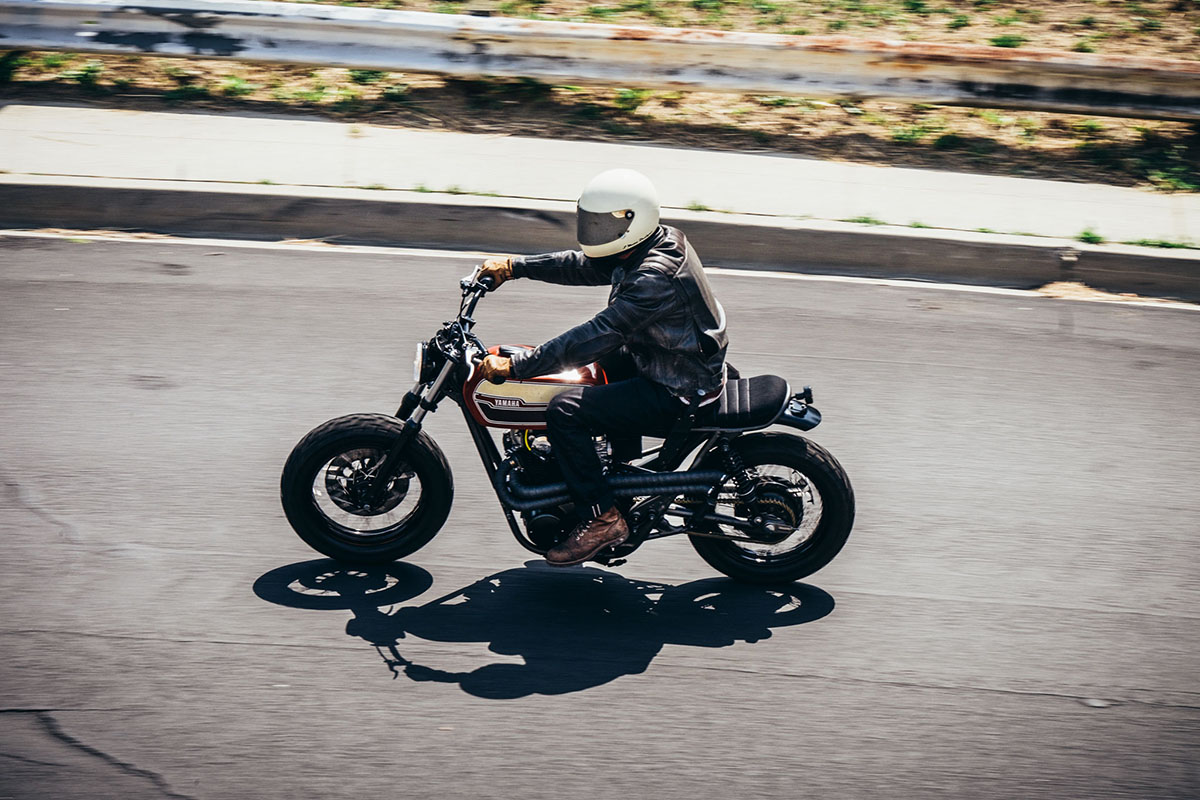 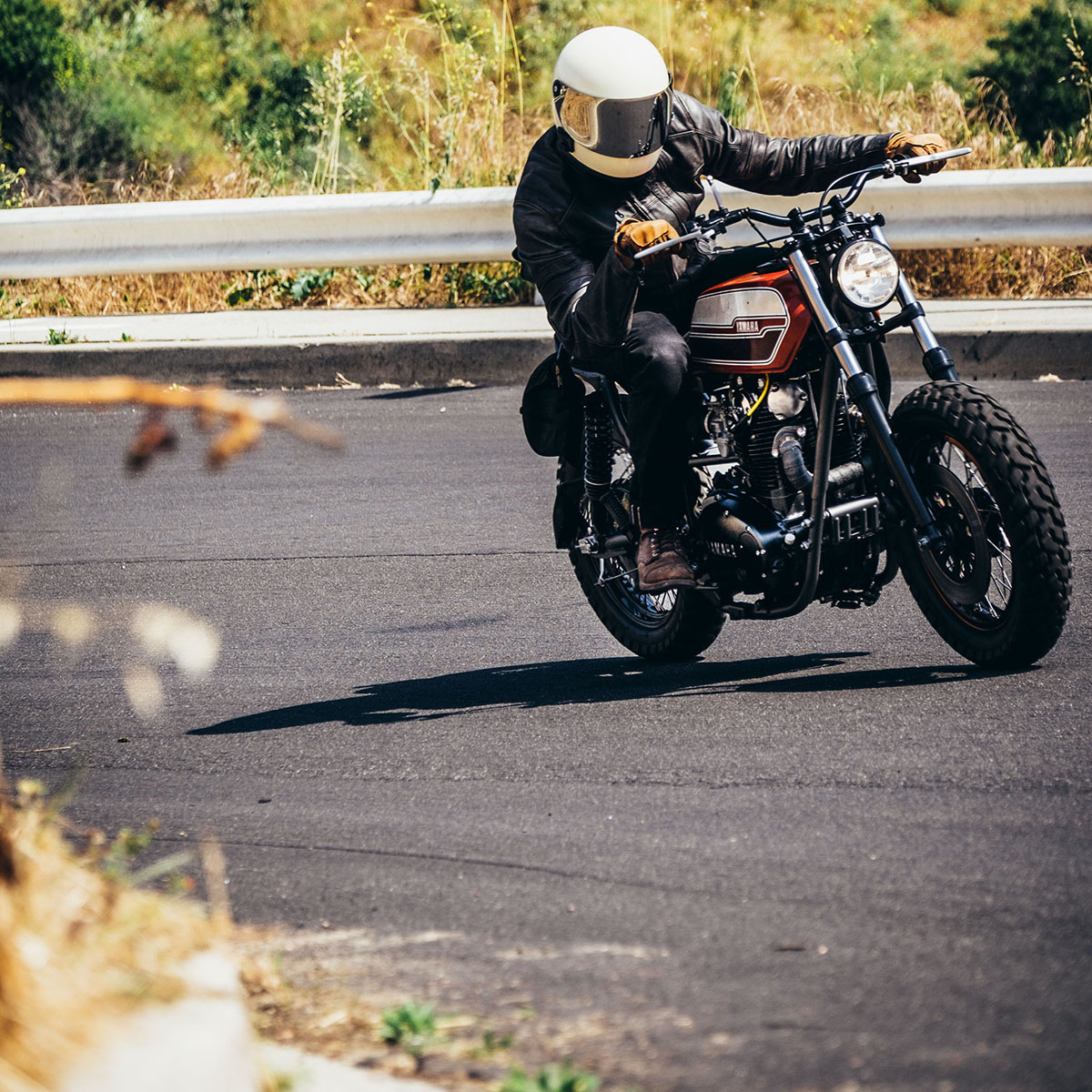 “My main goal with the bikes I work on is to preserve these vintage moto’s that are often either cannibalized for parts, or left to rot somewhere. There’s a great satisfaction I get out of taking rusty old metal that has been forsaken, and putting my blood, sweat and time into it, transforming it into something new again. I’m a big ‘form-follows-function’ guy and don’t put anything on a bike unless it serves a purpose. I feel like that creates an honest, and clean looking motorcycle. I also like to retain as many original parts as possible for sake of not simply buying a bunch of modern parts and bolting them on, but also it preserves the character of these classic machines. So things like progressive springs and heavy racing oil in the forks updates the performance of an otherwise unassuming front end.” 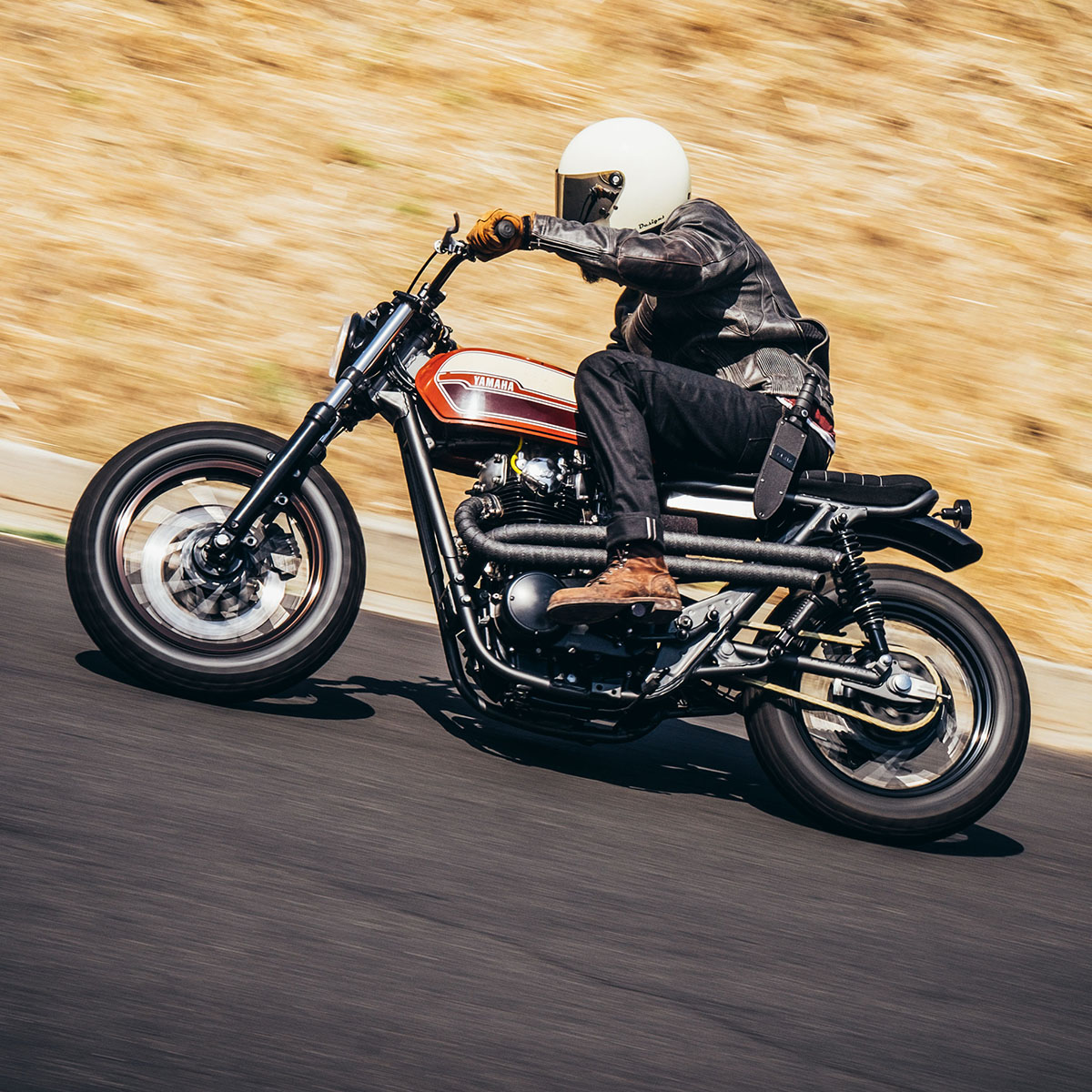 Despite staying true many of this old bike’s sensibilities and style, it would still receive some kick to make sure walked as good as it talked. A complete top to bottom rebuild on the motor would be completed with performance firmly in mind. The engine would be rephased, a big bore kit, port and polish the head, hot ignition, upped the jets – all the things that could be done to squeeze the most out of this road and track basher. “I’ve built exhaust systems for hot rods before, but never one for a motorcycle, so this was a first for me. Many hours of cutting, grinding, and welding later, and the exhaust was able to move from the head out to the rear in a manner I felt was aesthetically pleasing.” 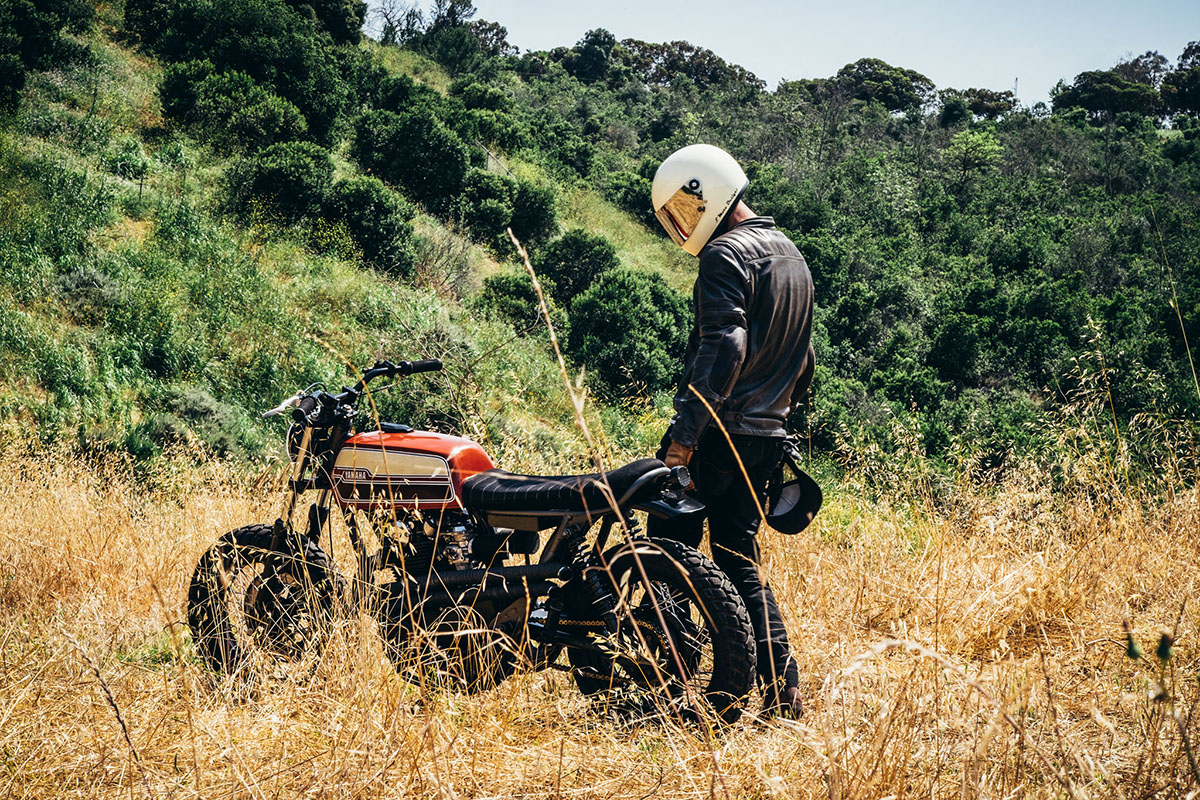 “This bike represents a lot of firsts for me. I’ve been restoring cars with my old man, and maintaining and modifying my bikes in my garage basically my entire life, but always on the side. The last few years or so I’ve been operating under the name L`Moto Designs. It’s a mash up really, the L for my last name (Licari), and my lineage coming from Italian craftsmen. I just moved to LA, while still very much a garage builder, I’ve dedicated full-time to building these custom bikes in my home workshop. With my background in engineering and manufacturing, I decided to apply my skills and experience to reviving vintage bikes with a modern twist for myself, not some corporation. While I’ve built many engines, done plenty of performance and fabrication work, made complete wire looms from scratch, and painted more than I care to recount on one bike or another, I’ve never had a chance to do all aspects at once on a single bike as a major project like this. I will say though, it is far less time consuming than restoring an entire car! This was my first ground-up, frame-off restoration on a motorcycle, and it was my first fully commissioned custom build to suit someone else’s needs. I thoroughly enjoyed building a performance oriented XS650 engine, and will continue building these killer motors in my home based shop here in LA. I’ve already started on the next one, actually. My goal is to turn them out, offering engine building services locally as well as to continue building one off bikes, resurrecting rotting 40 year old motorcycles so that they can once more rip down the streets to cafes and bars.” 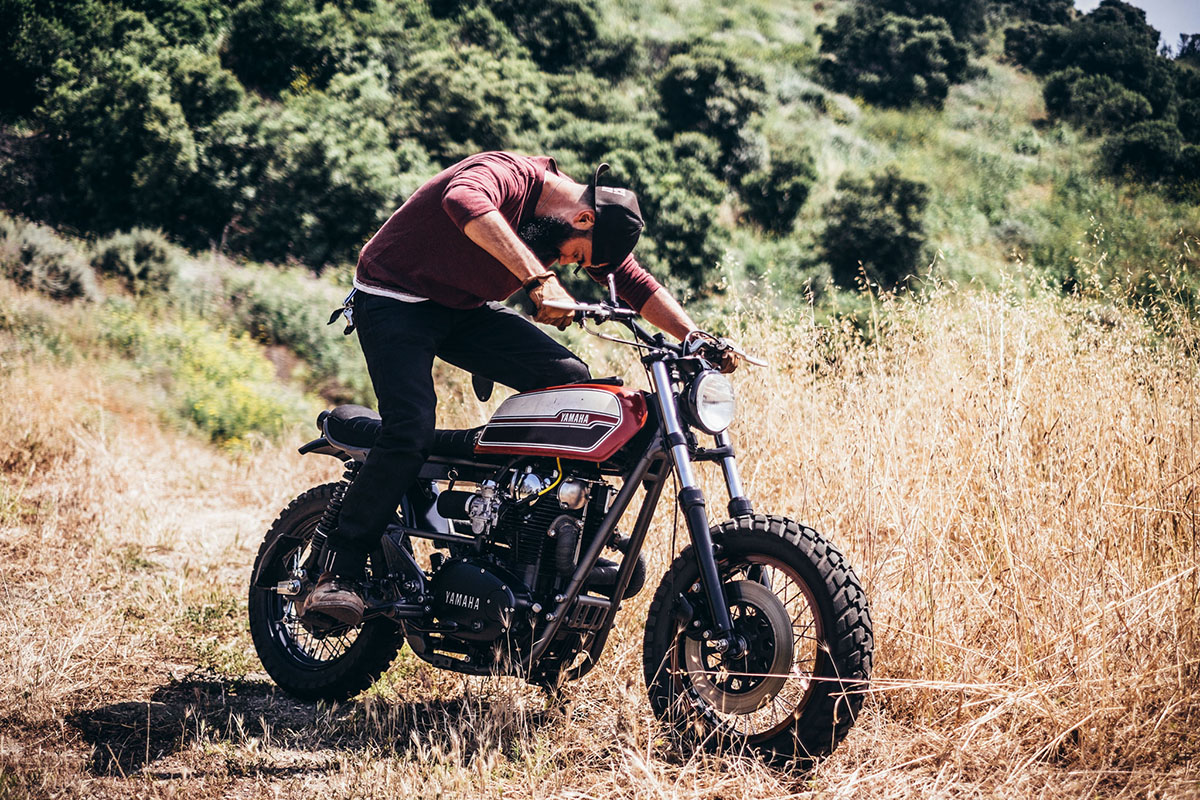 “In the end, I’m really happy with the way the bike turned out. It has the aesthetics and design cues both my buddy and I drool over, and it meets the needs originally intended for it, making it a very functional machine that gets ridden daily. I’ve owned XS650s before – have one now, and worked on plenty. However, this was the first XS650 motor I’ve built from scratch, and I’ve never done a rephased crankshaft before. So I was beyond stoked when the engine came together so well and fired right up without issue. It didn’t take much tuning to get her dialled in which was nice, that’s thanks to the fact that I’ve been playing with these Mikuni BS series carbs for a long time. They transform way this bike performs, it’s one of those things where you just have to ride it to understand. Before it was torquey, but it was harsh, and it vibrated so bad it would just shake itself apart, no matter how much thread locker you squirted on. Now, the thing has the smoothest power curve, just roll on the throttle and she rips, “gobs of torque” as the Harley guys say. It idles perfectly; you get that front tire shake at stoplights, but its not jarring your teeth. Then there’s the exhaust note, perfect for in the city. Its quiet and tame at idle, just a subtle lope to it. When you open up the throttle though, the beast roars to life and everyone notices. Its deep and throaty, yet refined, not obnoxious. Hearing that gets me excited every time.” 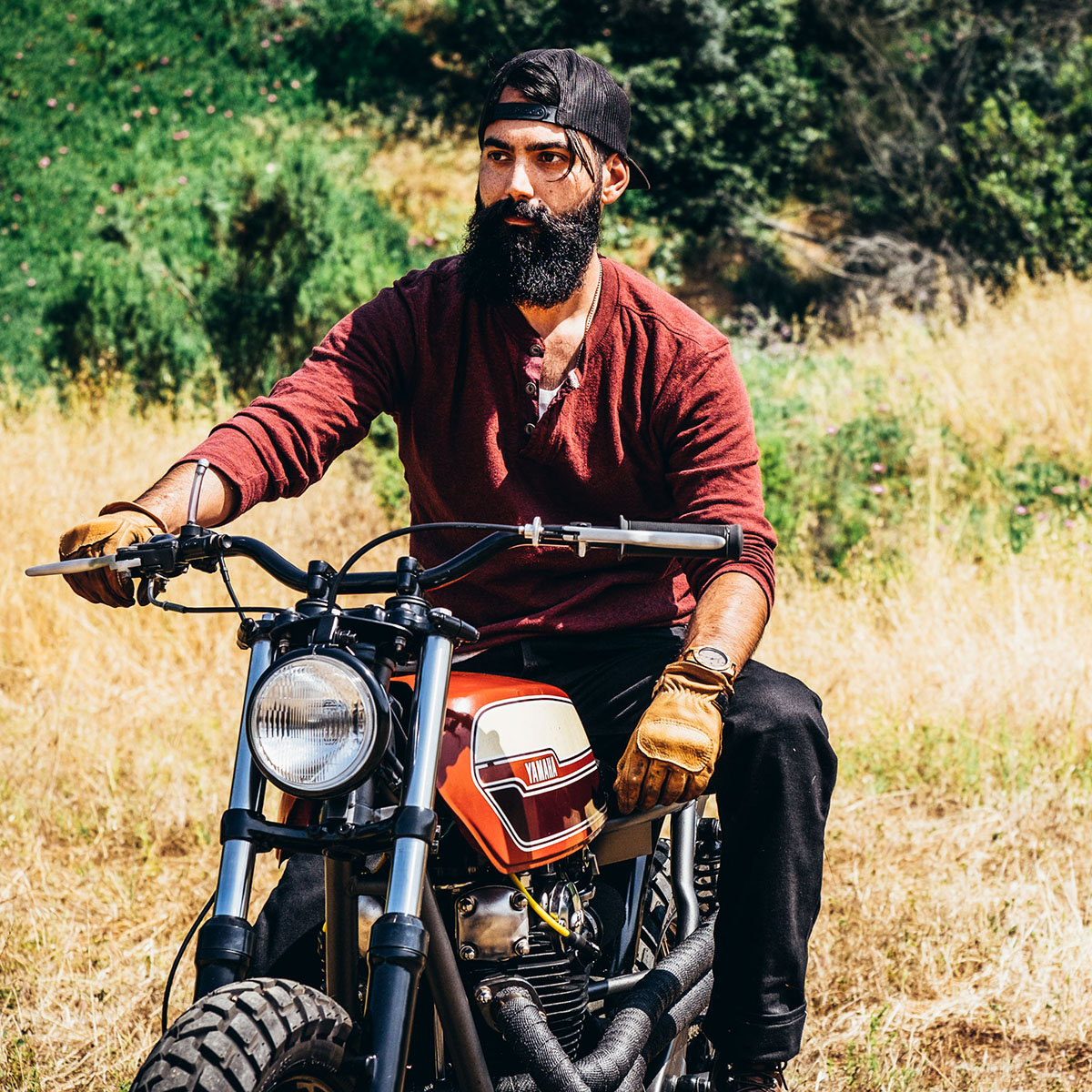