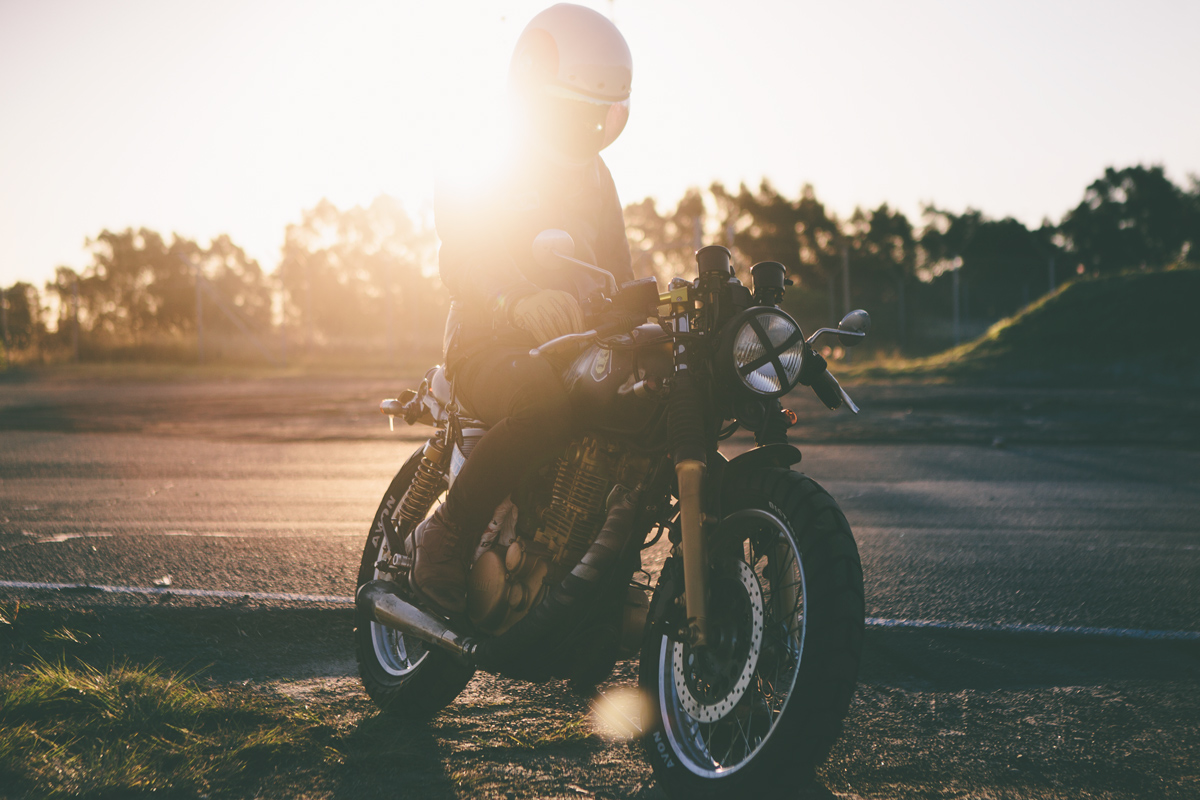 Much like first girlfriends, first bikes are full of experimentation and excitement. There’s plenty of bumps along the way however, and if things go to shit a rebuild is in order.

Max’s break into the world of motorcycles may have come from melancholy beginnings, but it’s grown into something passionate and exciting.

“Basically after the worst breakup I’d ever had I was absolutely gutted and saw really no point or purpose in anything. A dear friend took me out to the flicks to cheer me up and we saw the Ben Stiller film ‘The Secret Life of Walter Mitty’, I’ve never really liked ben stiller much before seeing this but it blew me away. Here was a guy who’d lived a life of safety all his life and it had gotten him nothing, when he started taking risks, trying new things, everything turned around for him and he was really making the most of life. 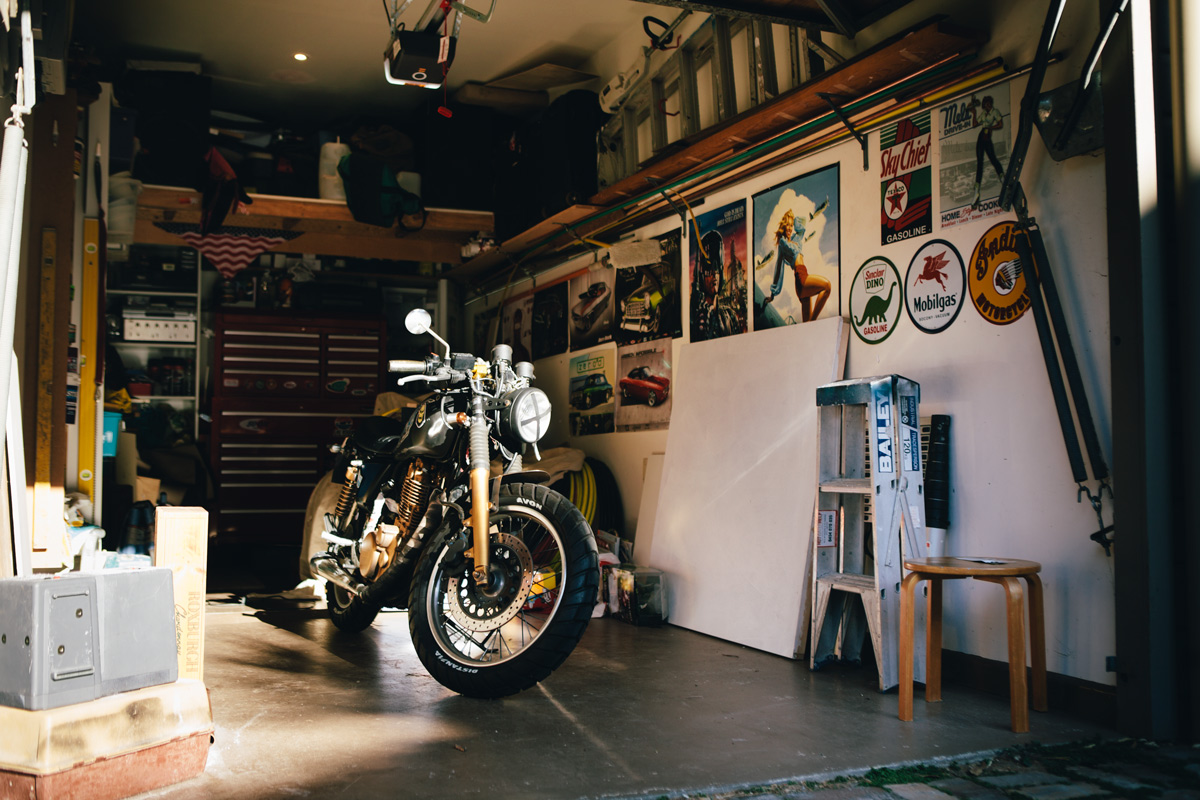 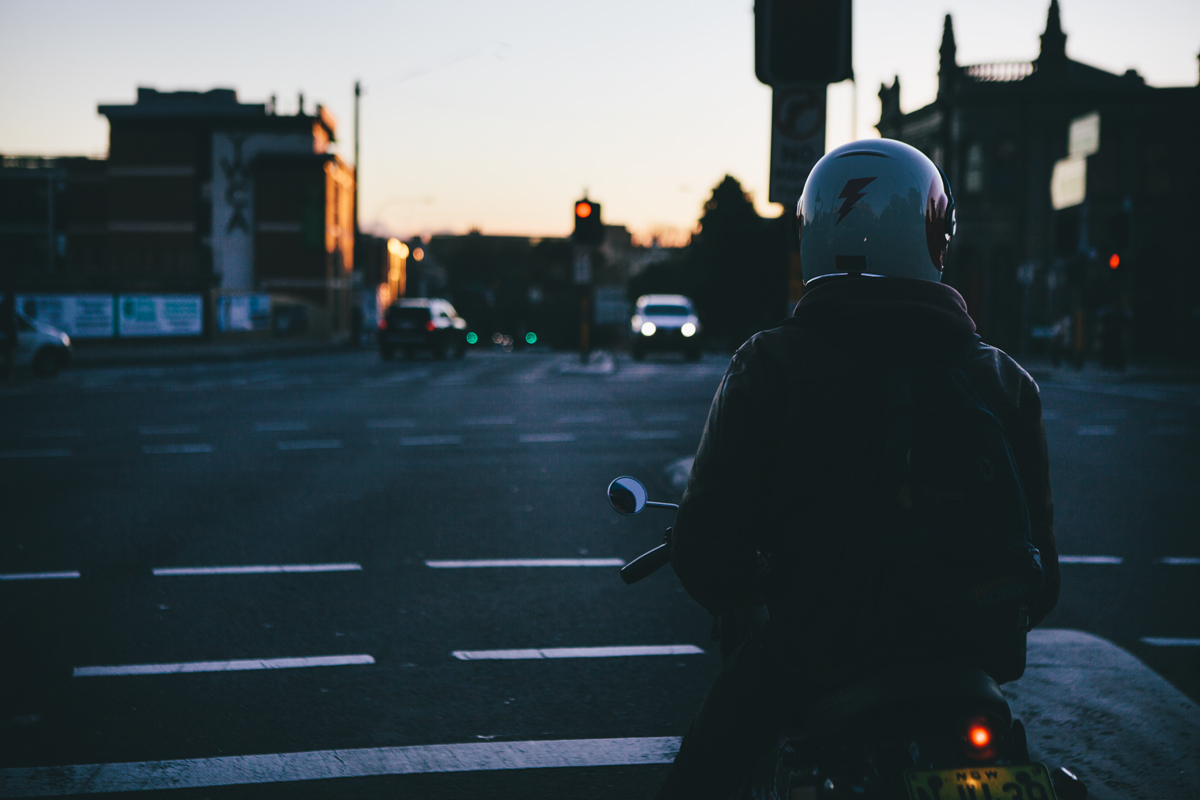 I realised I needed to take a risk, try something new, find something to be passionate about again but I wasn’t sure what. As we were leaving the cinema I saw a guy thump past on an old SR. Everything clicked at that moment, I was going to not only learn to ride, but customise my own motorcycle. I was gonna form a bond with this thing, it was gonna save my life and it was gonna pull me out of all that negativity. And it did!

After all, you are what you love; not who loves you.” 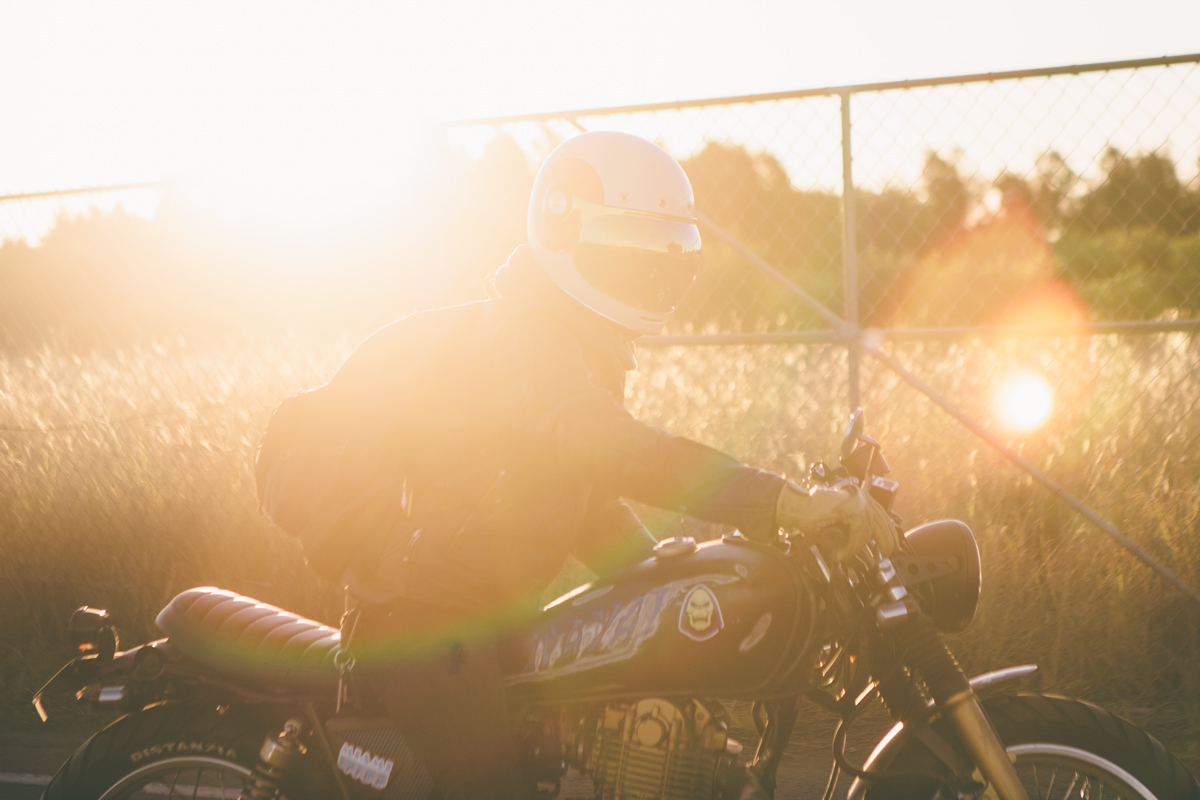 As with most people starting something new (motorcycles in particular) there was a lot of trial and error in this new passion. Sometimes these tricky parts in life can beat us, but determination was firmly ingrained in Max’s mindset. His commitment is admirable, and certainly something everyone can take something from. 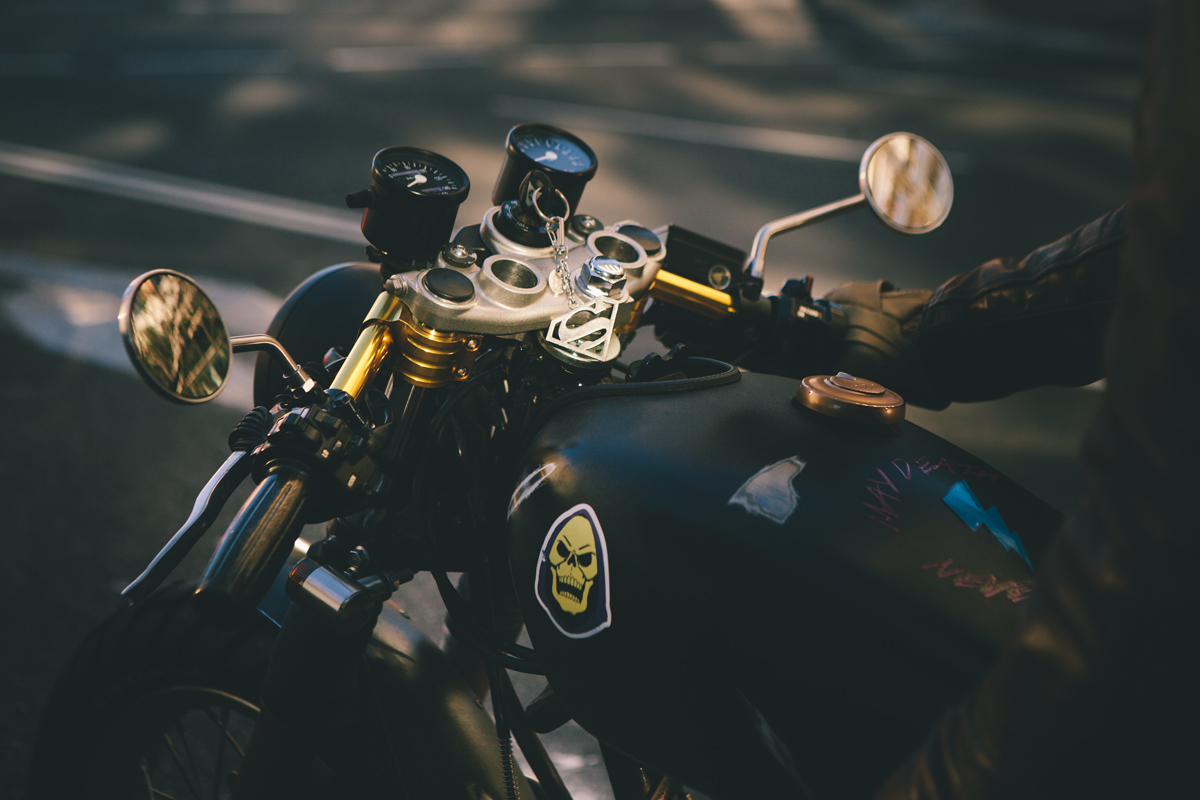 “It was early January 2014 that I first went for my L’s, I recall it well, I booked a spot in Rouse Hill as it was the soonest availability, motorcycle training was always booked out weeks and weeks in advance and I wanted my wheels now! I got out there head to toe in gear and passed out from the heat. I remember thinking “whoa this stuff is dangerous! I’ll never ride a motorcycle ever again” but about a month later I went to another rider training course; though I failed again because I couldn’t get my legs up and keep my balance. I booked in for another session and failed again for the same reason but after a bit of ridiculously expensive 1 on 1 rider training I successfully passed my fourth attempt and I’ve never looked back since”

Once he had his shiny new motorcycle licence it wasn’t all smooth sailing, with Max deciding to refine the art of the stack. Many riders pack it in and give up bikes from much less, but not Max… “The two crashes I had when starting out resulted in titanium pins being placed in my arm to keep it together. The benefit being with the time spent in a sling I was able to work on my first bike and cafe it as I couldn’t really ride it anyway” 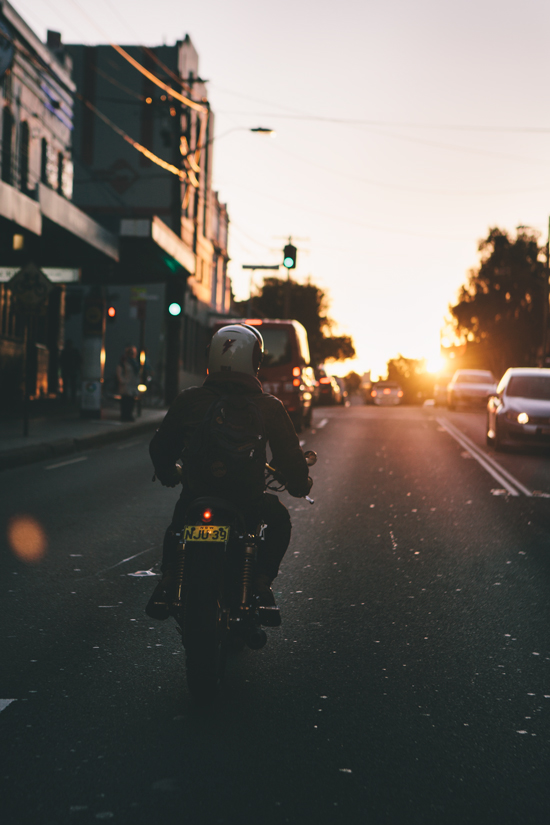 Max’s current ride is a fuel injected Yamaha SR400 2012 that was a grey import from Japan. Despite being a common bike to turn into a Cafe Racer, he’s made sure his SR has plenty of personal touches and smaller details than the usual clip ons and other bits. 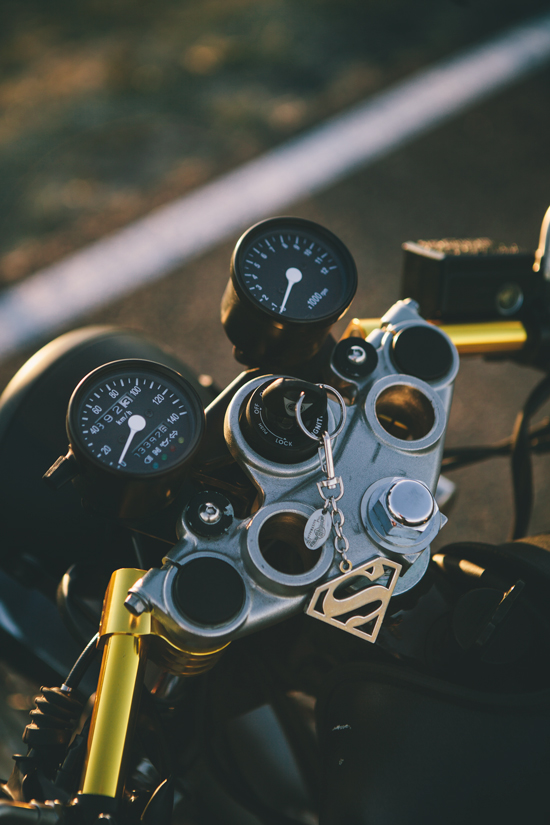 What I’m most proud of with it though are the little details that set it apart, what gives it even more personality. When customising the bike I was mainly inspired by two things, the first an album by the band My Chemical Romance called Danger Days: The True Lives of the Fabulous Killjoys, the theme of which was basically Mad Max crossed with Willy Wonka, Post-Apocalyptic with a heck of a lot of colour. The biggest reference to the album can be seen on the side of the tank where I painted the word ¡Vaya! Spanish for Go and can be seen painted across the bands Pontiac Trans Am in their music videos. The second reference is painted on the tank itself, it says “May Death Never Stop You”, The title of their greatest hits. My Chemical Romance are a band that meant a lot to me growing up (and still do!) I also listened to Danger Days a lot while making the bike so it seemed fitting to add some touches.” 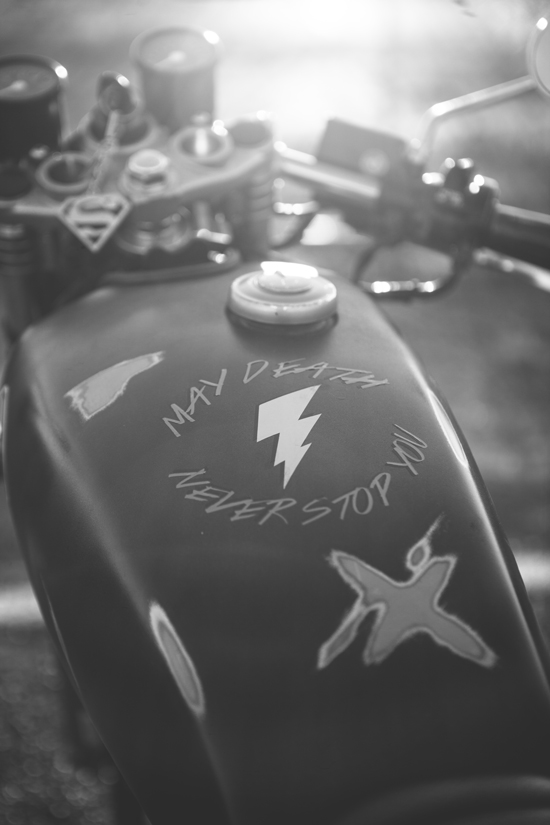 “I was also inspired to make the bike cartoony, like out of a comic or an action figure accessory, I didn’t want the bike to seem like a normal bike I wanted it to seem like some kind of character. My solution was to do weird things like paint the engine gold, intentionally scratch up the tank (Hence my name for the bike, Skratch) and cover it in references to things I love, stickers from Miami Vice, He-Man, Power Rangers, Drive, Godzilla, The Killers, X-men and Street Sharks. I even wrapped the kick starter in Kung Fu headband that says “fighting spirit”. The bike is from Japan after all.” 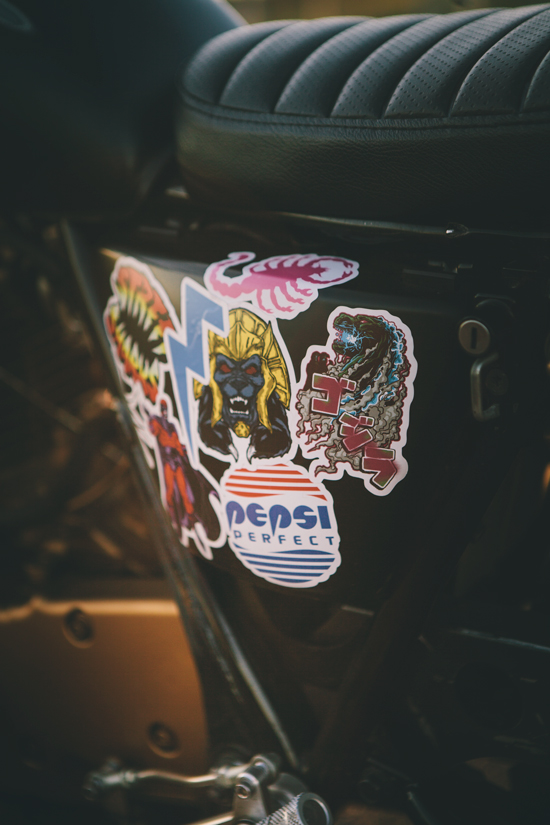 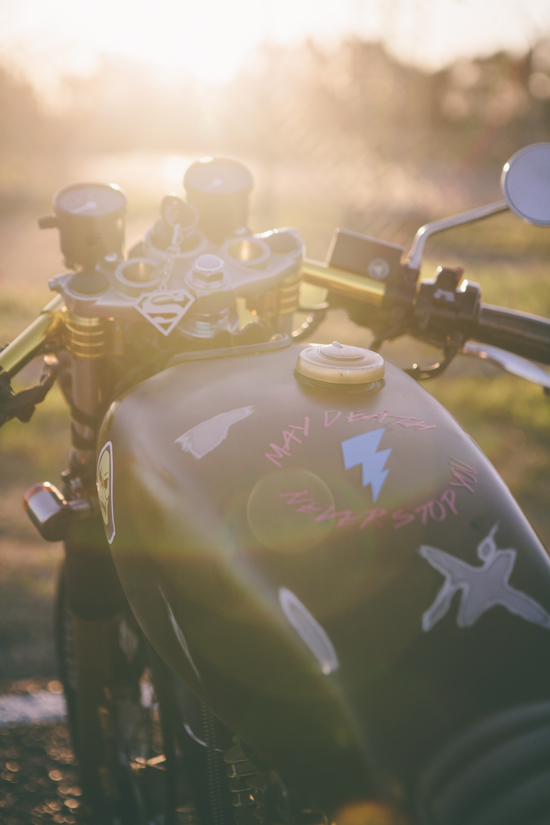 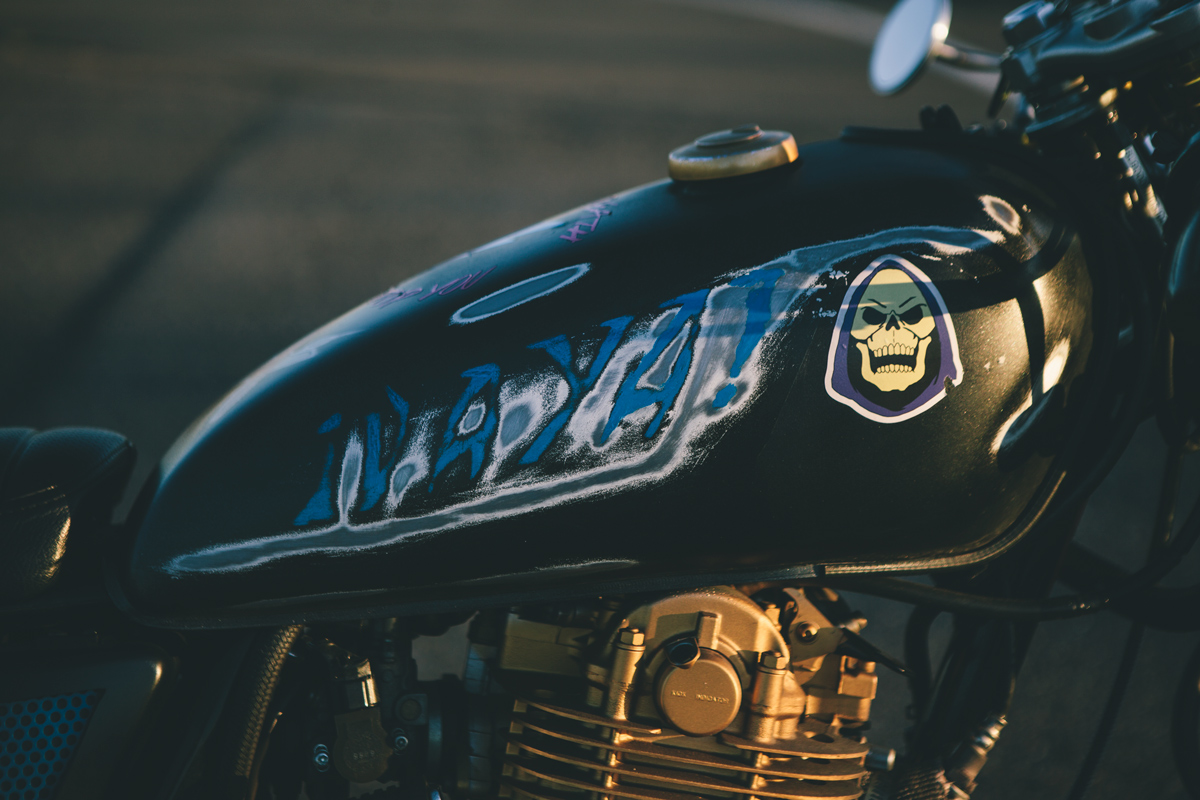 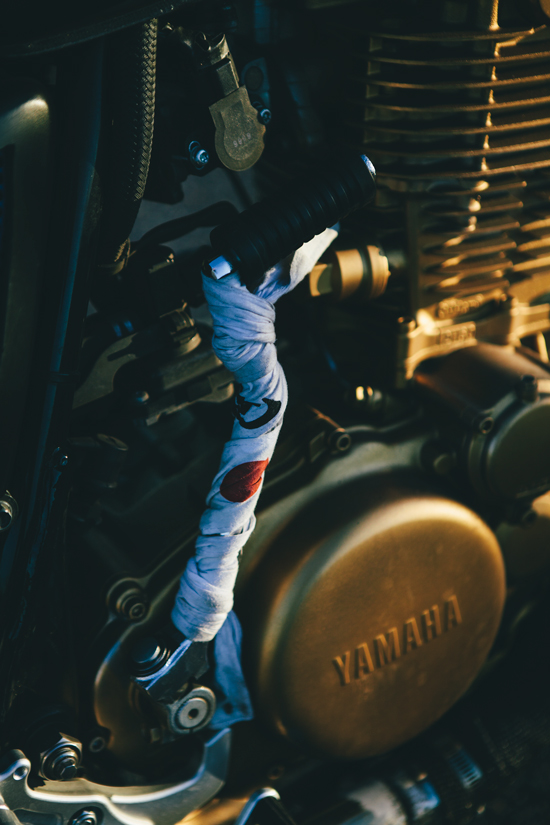 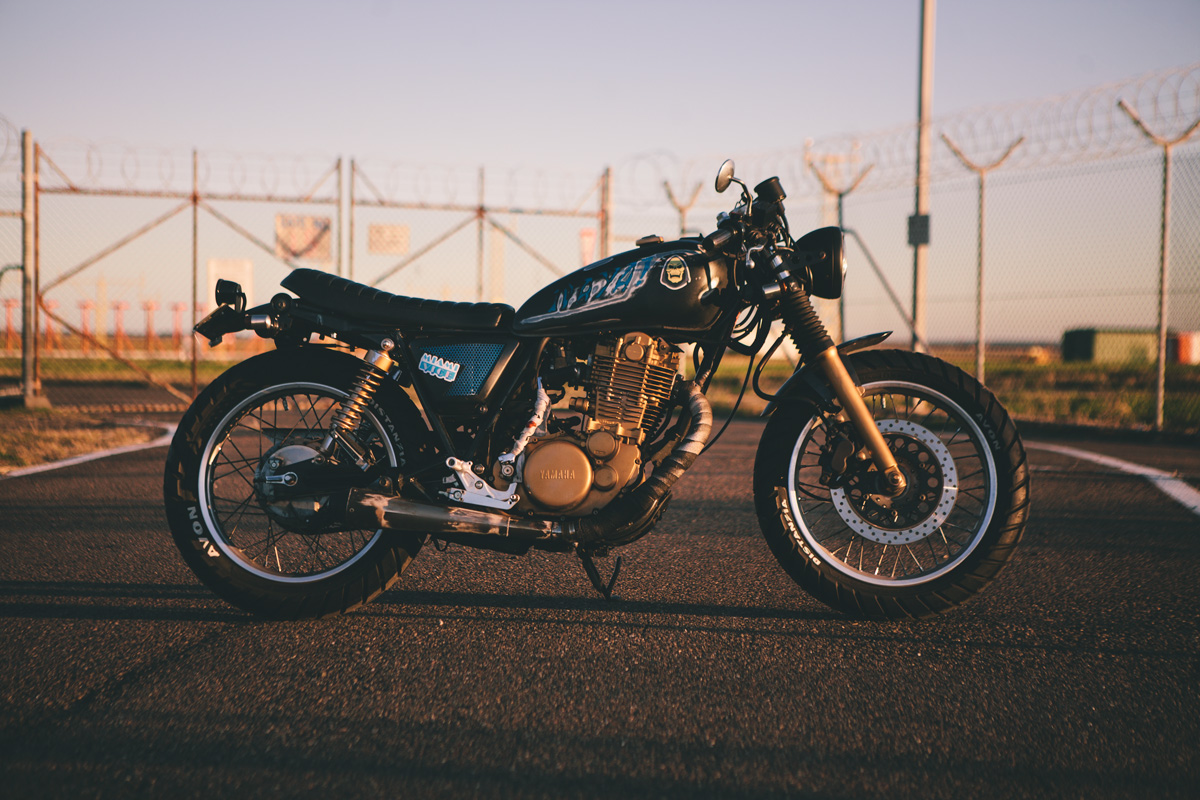 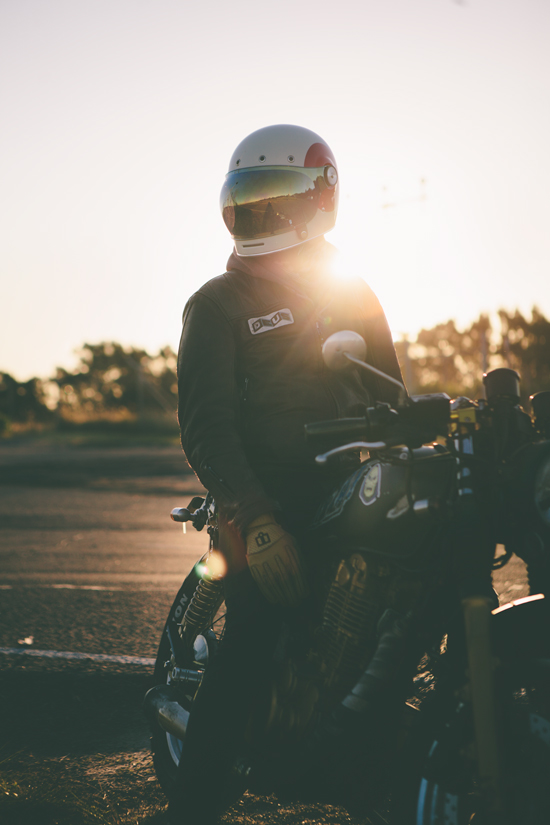 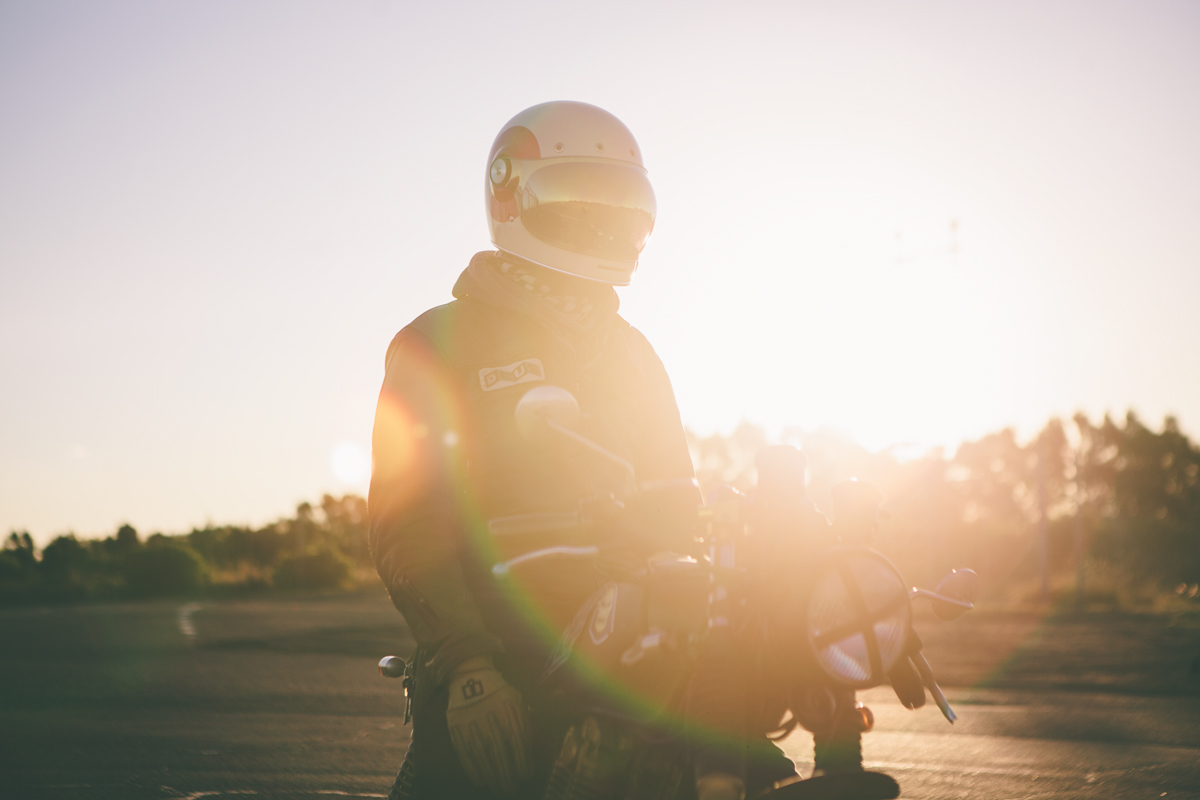 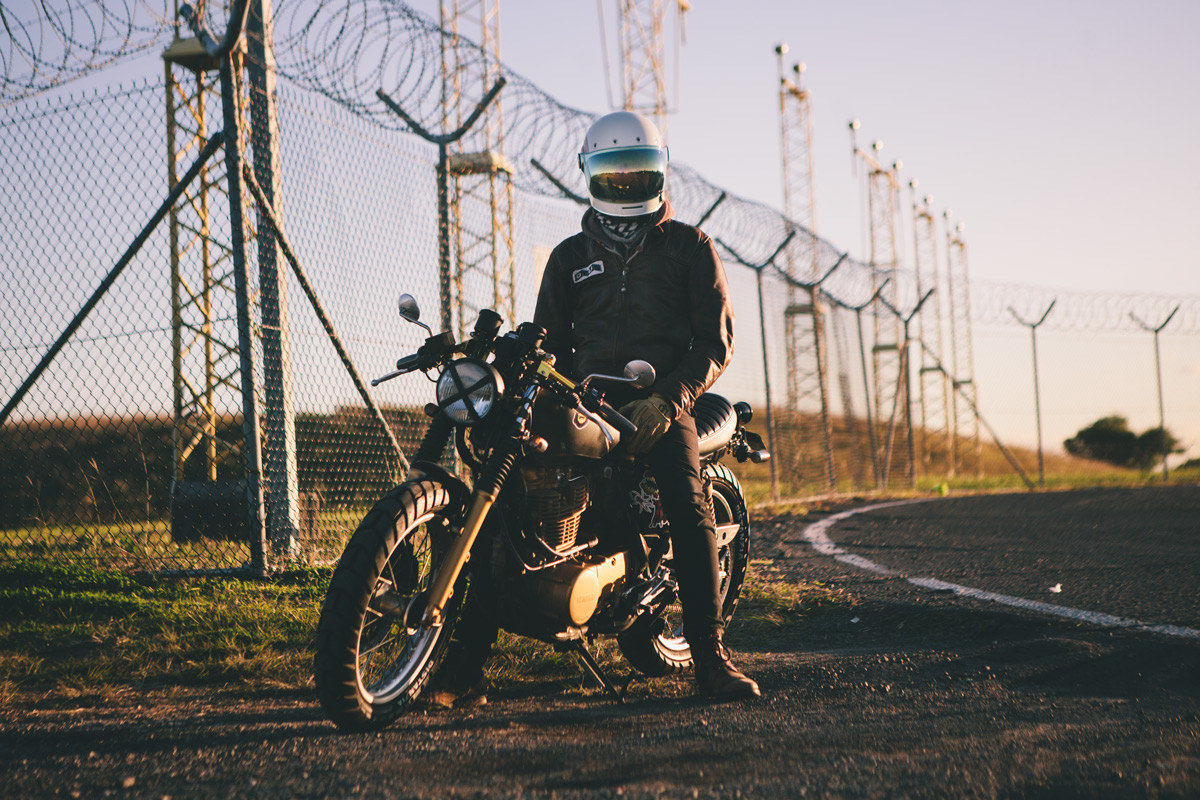 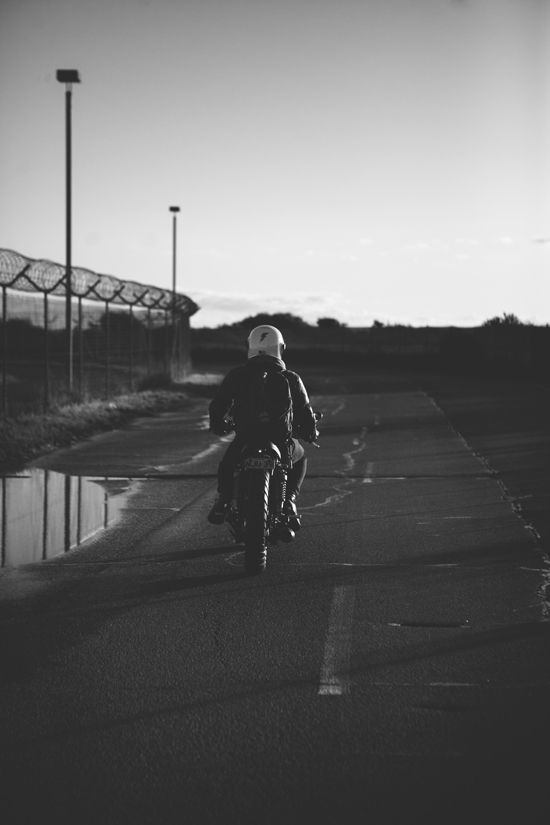 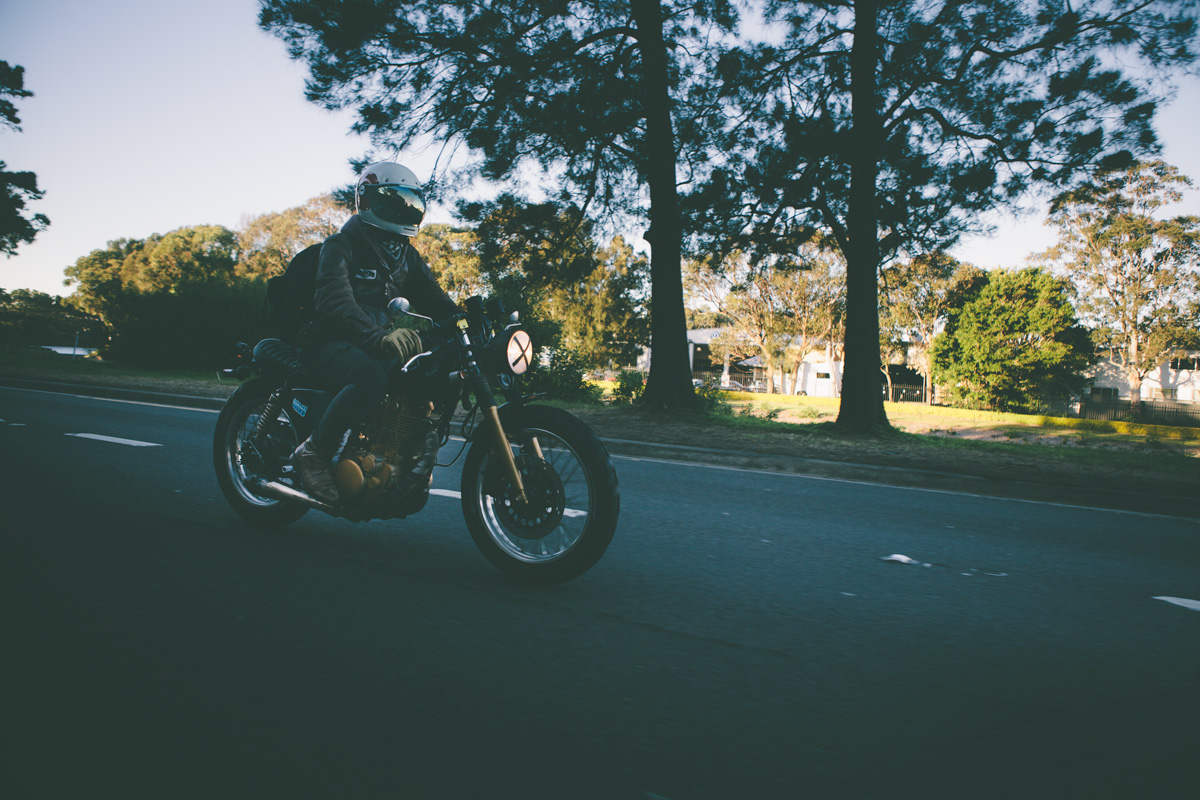 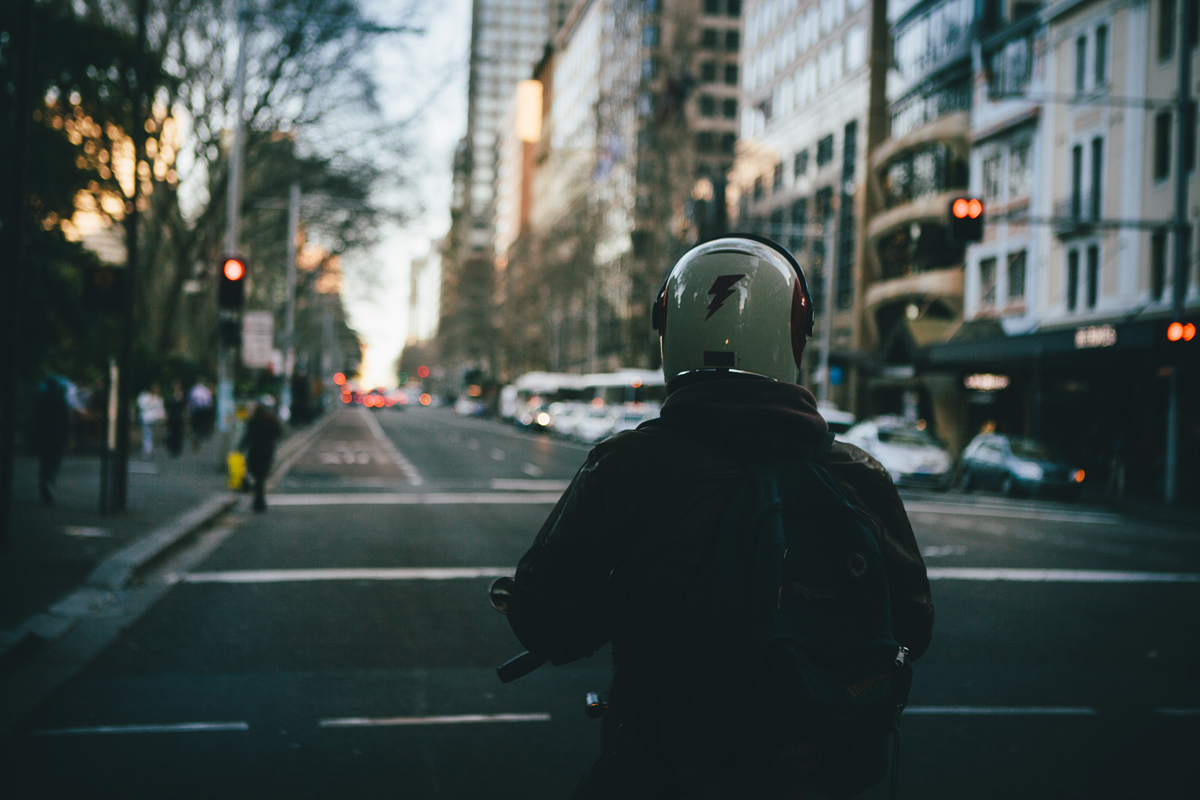 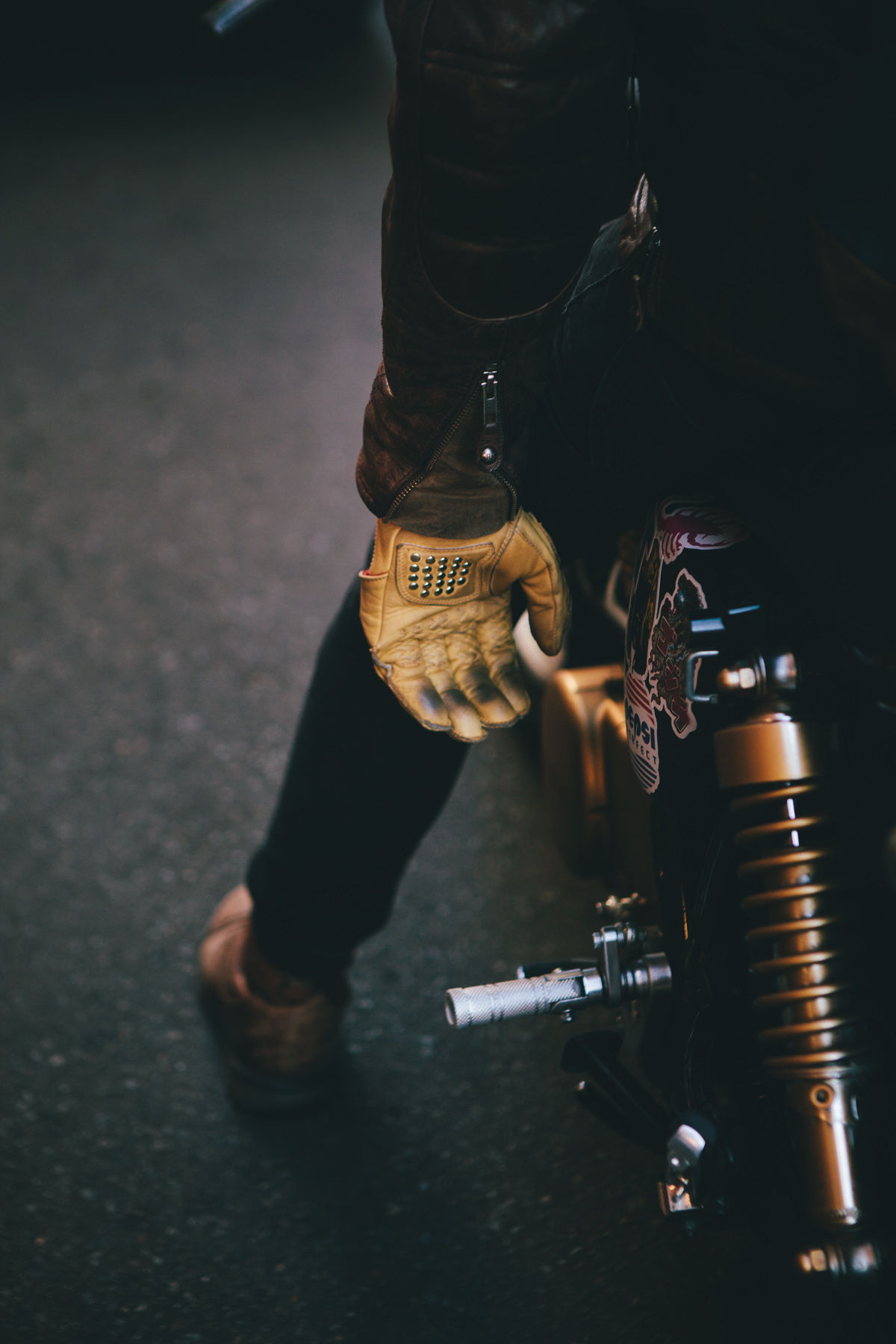 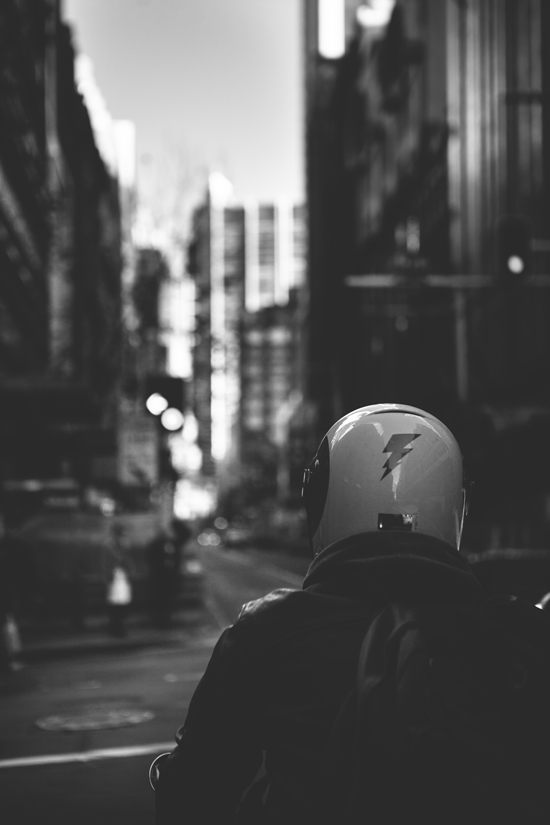 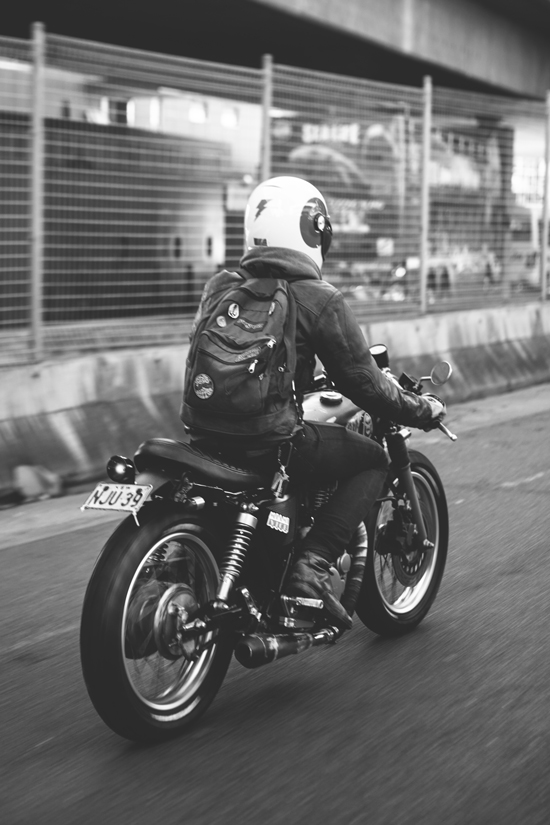 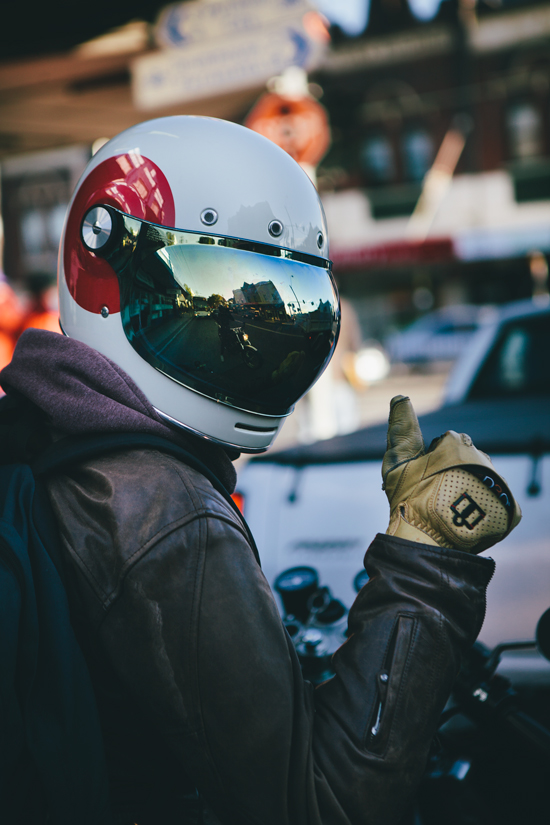 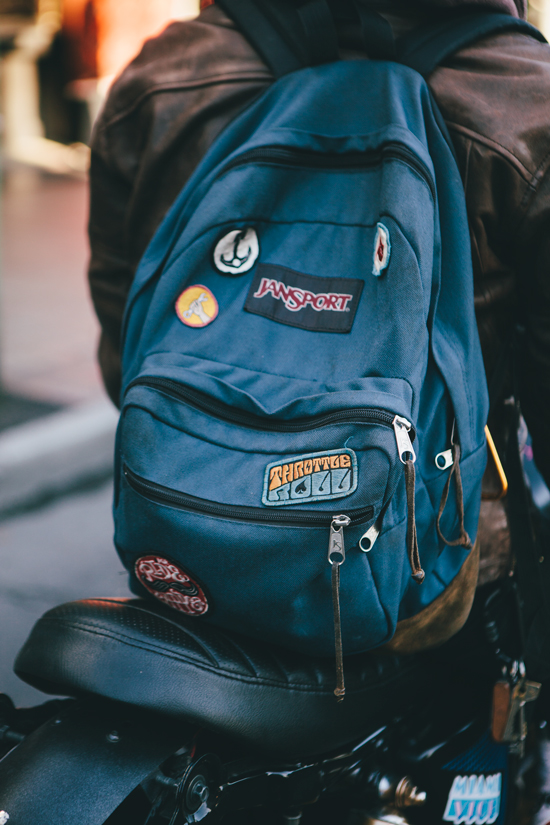 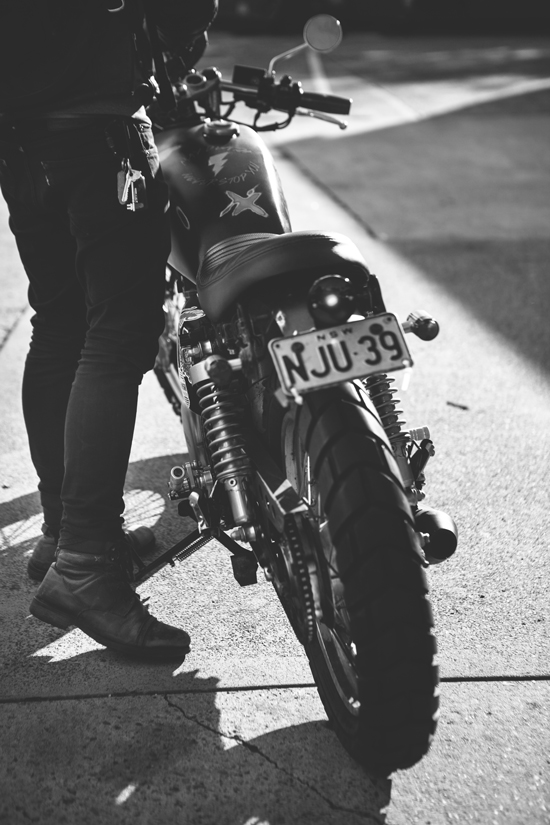 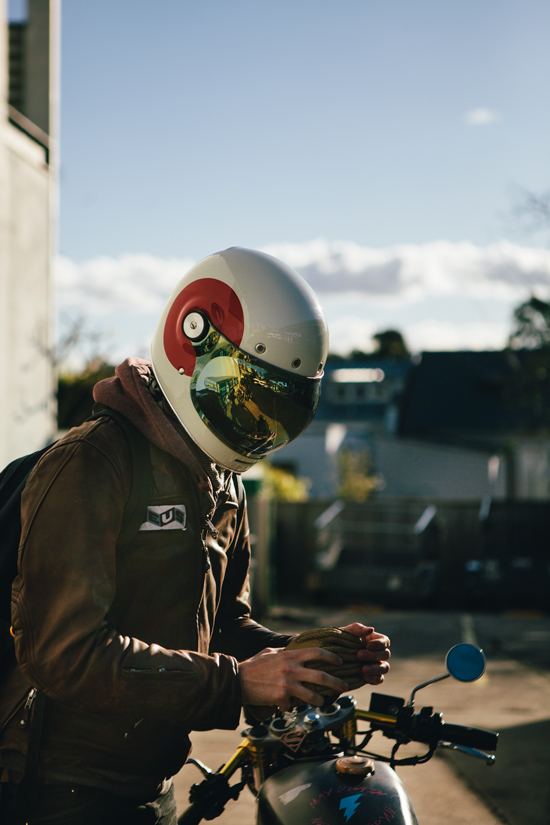 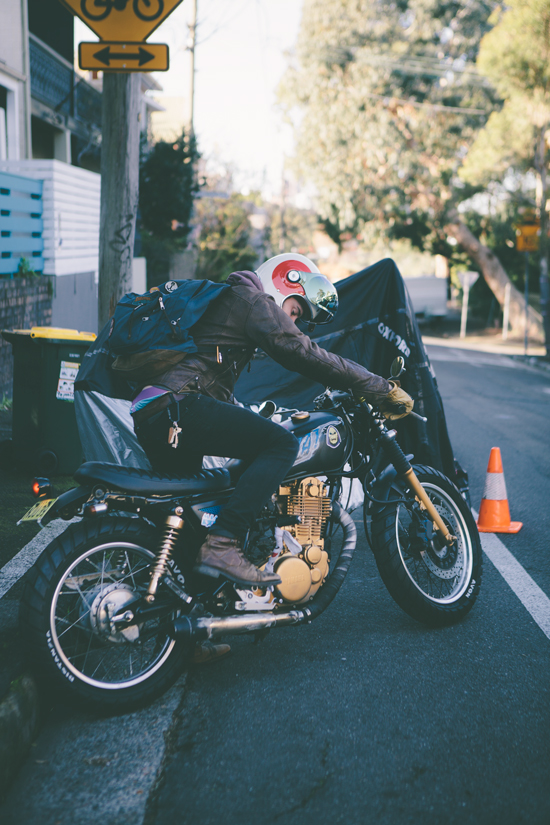