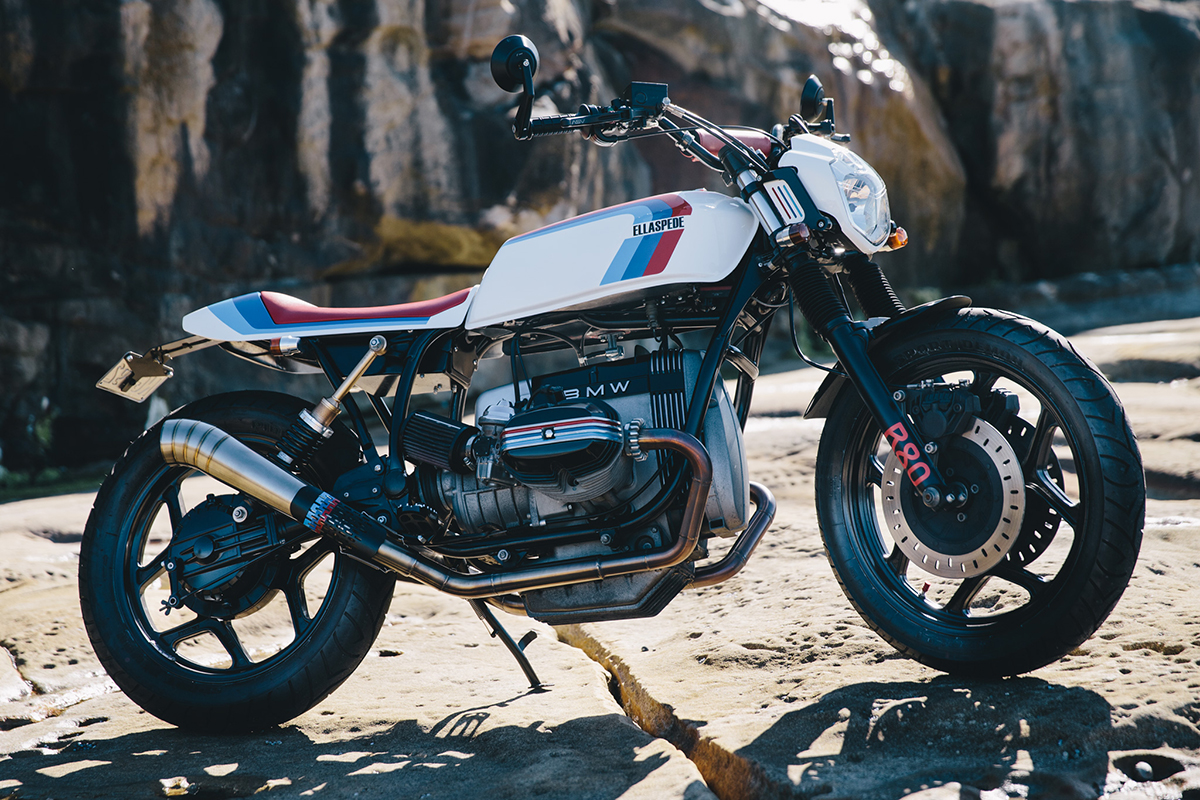 Long distance relationships can be trying, and often difficult to make work. For Chris and the blokes at Ellaspede however; thousands of kilometres would not hinder their combined efforts in creating this nimble and unique machine known now as the Ellaspede R80 Street Tracker. 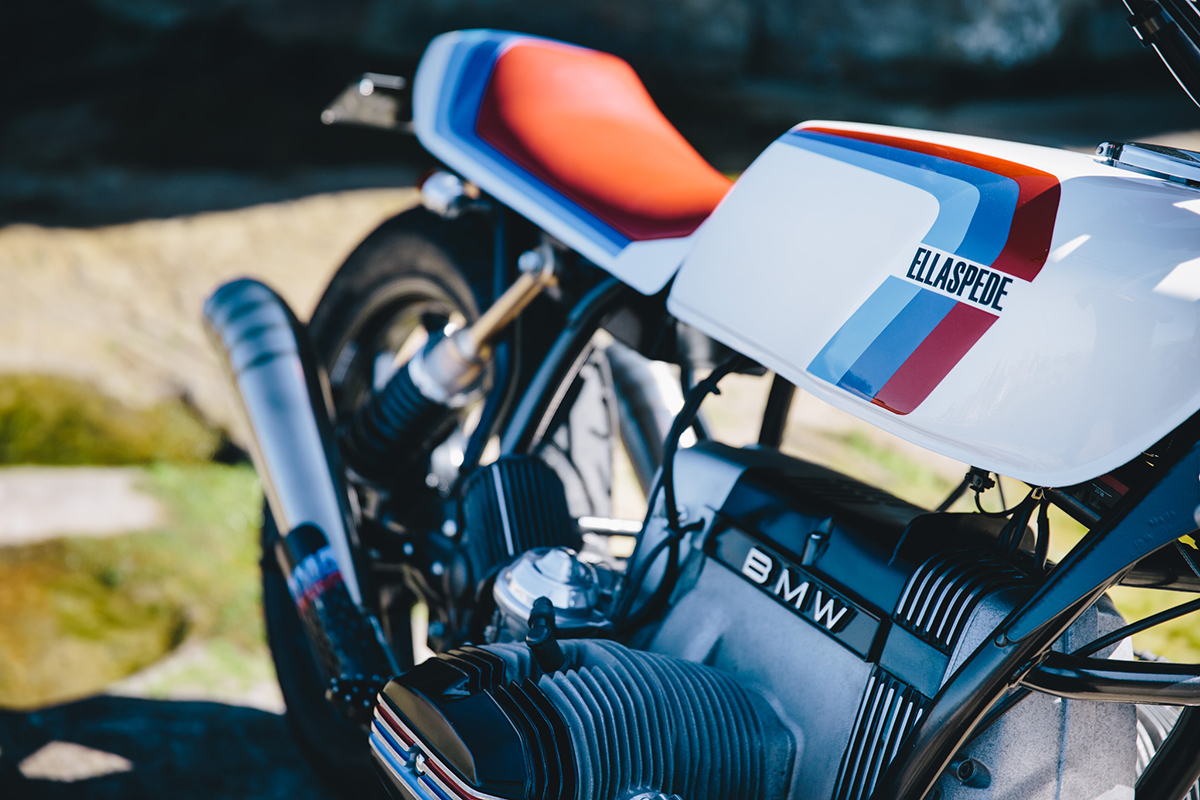 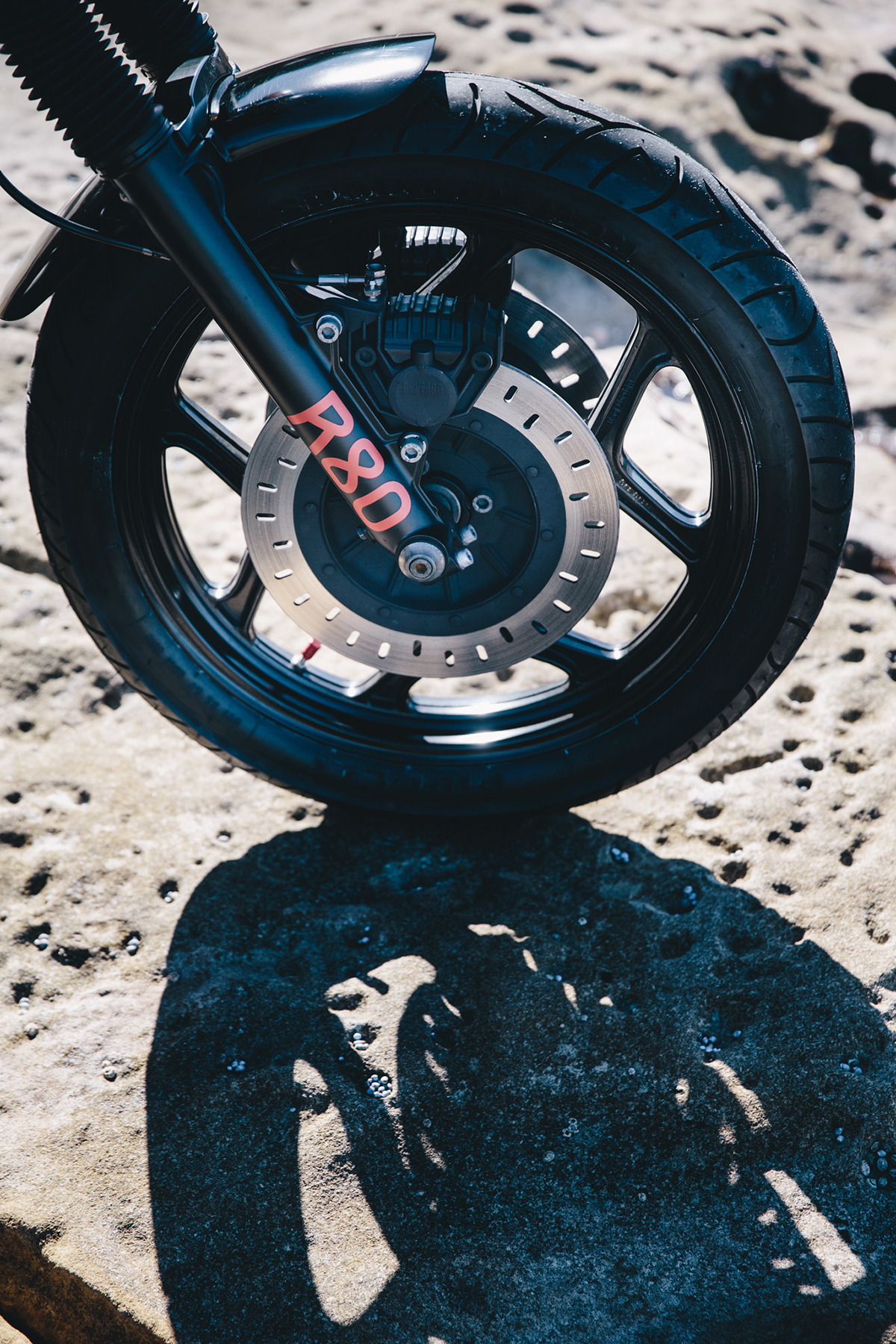 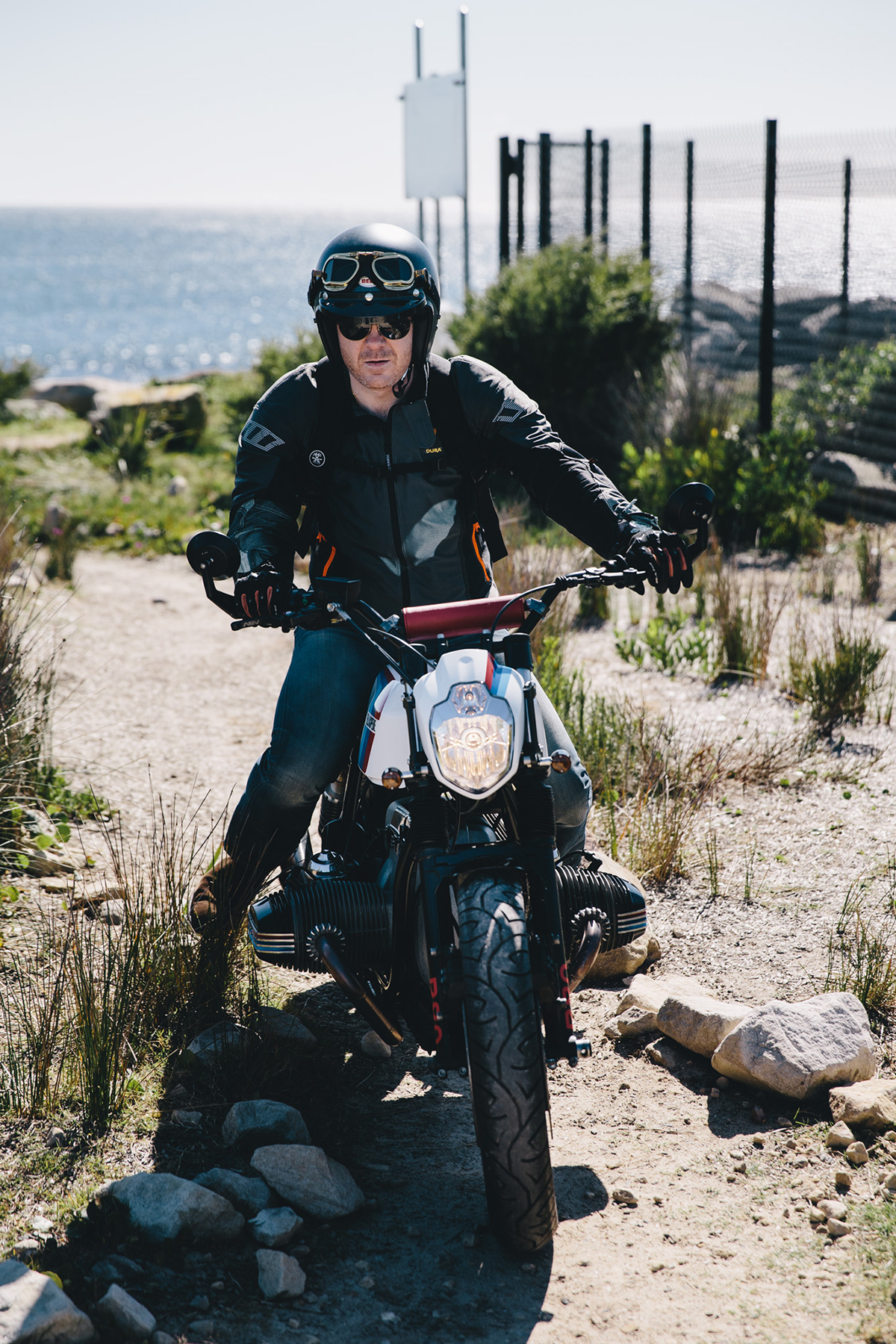 Chris’ longstanding love affair for Airhead BMW’s would be kicked into gear after selling his Triumph Thruxton build – the itch for a new project would keep him up at night as he mulled over ideas and possibilities. This new machine would tick off the boxes that his previous builds did not, mixing a more practical design for Chris’ riding stance along with the perfect balance of heritage and modern tech. “As time passed, it seemed to me like every second café racer build around the world was an R-series BMW, so I decided mine had to be unique. After the compromised riding position of my previous Thruxton I decided a Street Tracker would be a more usable design for me. So the original brief was simple – 1) make the engine layout the star of the show, 2) make it every-day comfortable to ride and 3) use a BMW M Sport colour scheme.” 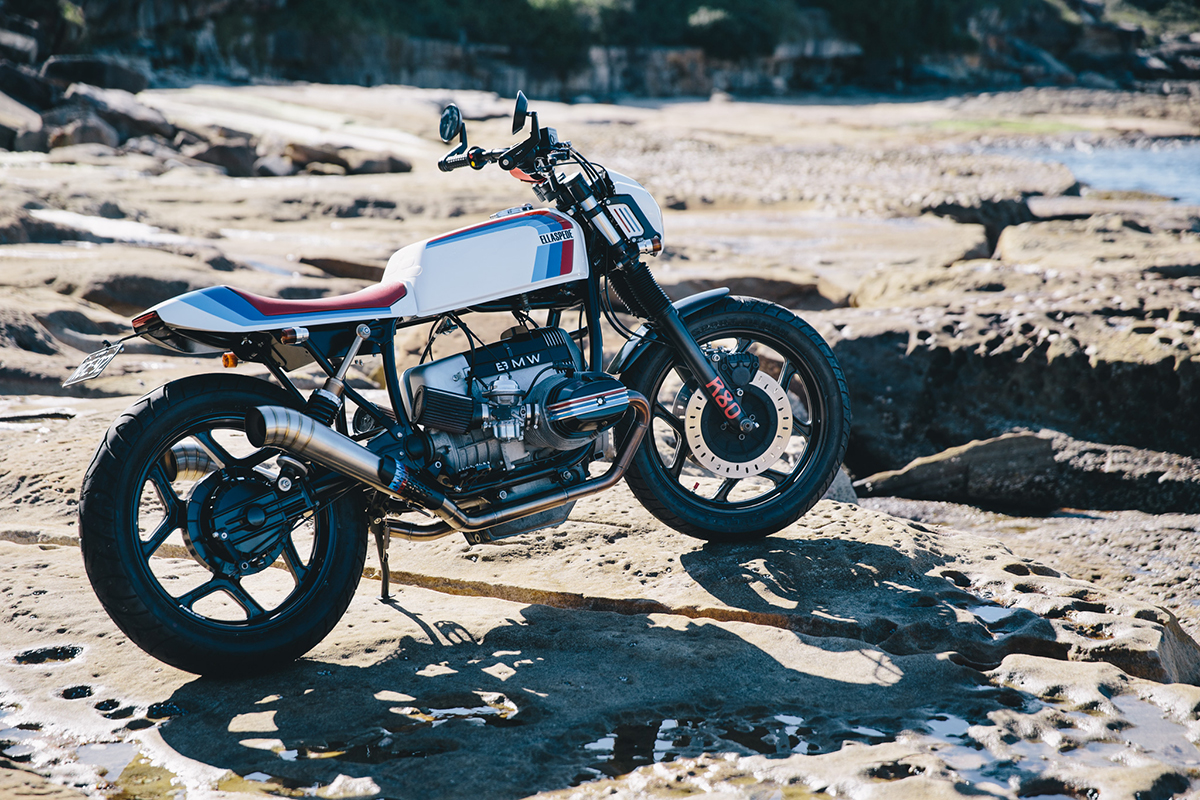 The battle plan was now taking shape; some troops were required before the big push however. This is where Ellaspede would enter the picture. While at a bike show in Brisbane, Chris met the lads that had been making incredible custom motorcycles. “I loved their builds and their attitude, so I asked them to work with me on some CAD designs. That part was easy to do from a thousand km’s away. After a few iterations we landed on a great design. I didn’t have the skills to build something that good myself, and I thought about trying to find someone in Sydney who could do it, but in the end I decided Ellaspede would be the best people to bring their design to life.” 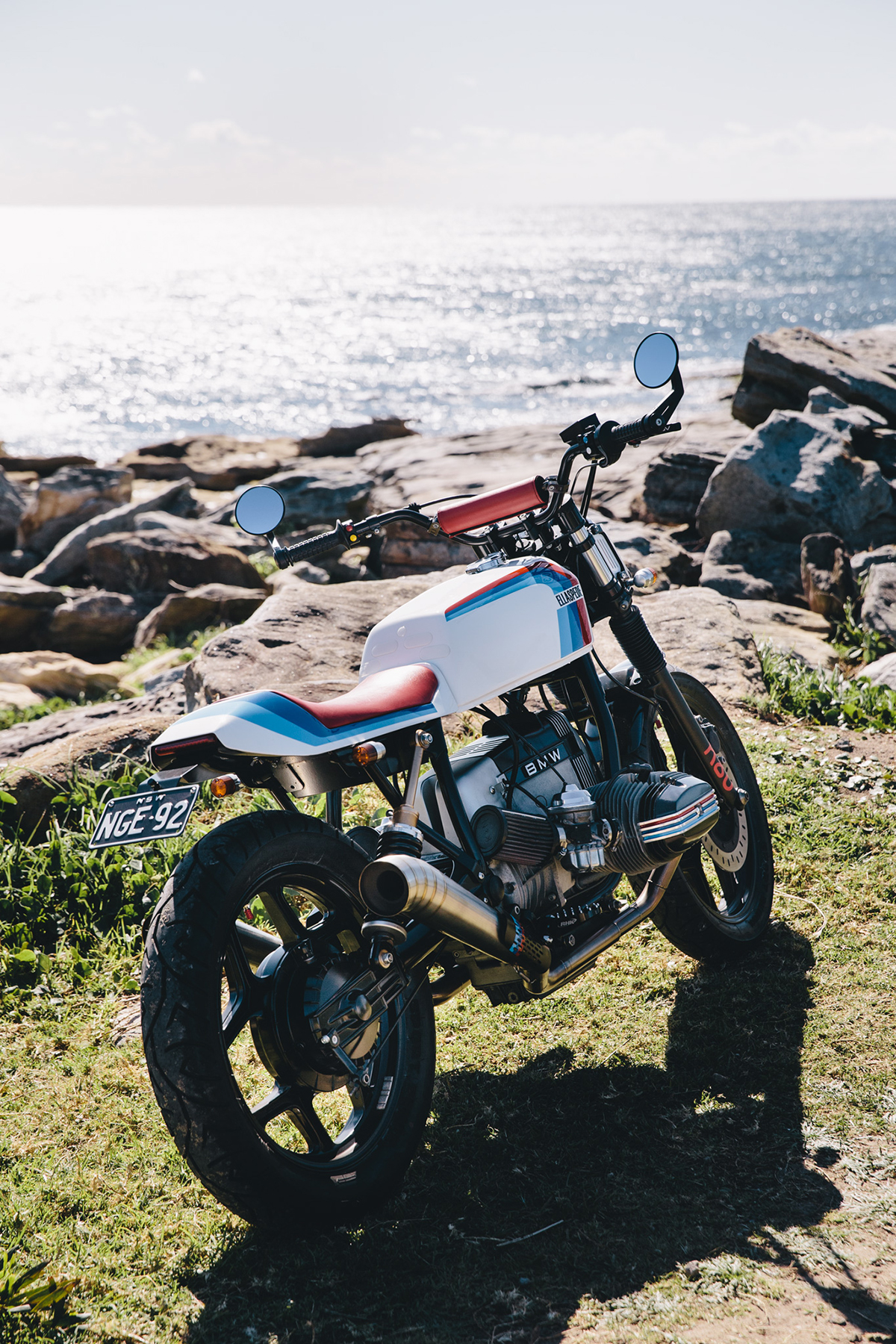 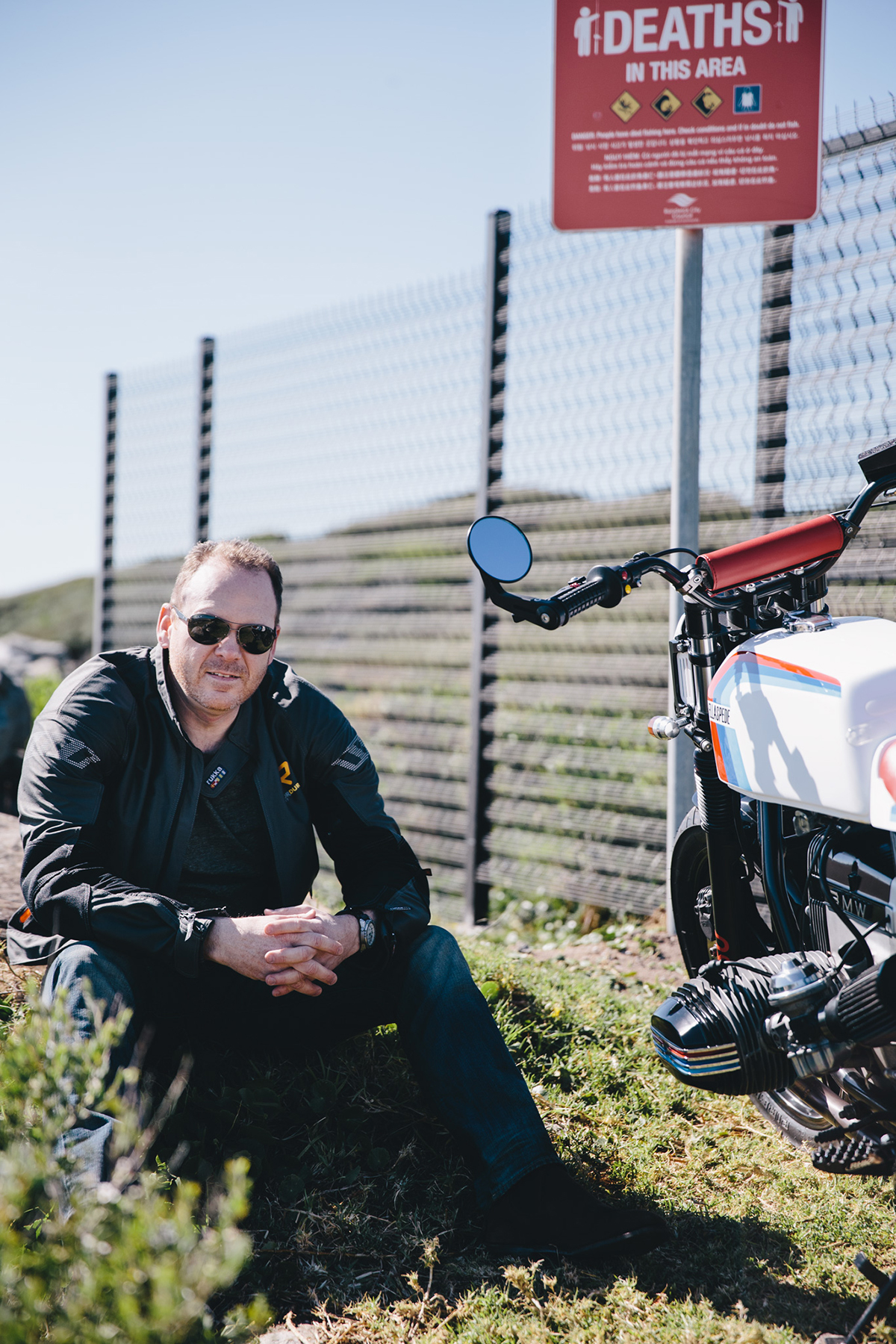 The chopping now started, and a few trips up to Brisbane by Chris the bike started to take form. There were a few critical decisions during the build that I needed to actually throw a leg over the frame for, but it’s surprising how much can be done by phone, email and lots of photos. The team at Ellaspede were excellent at keeping me informed along the way.” 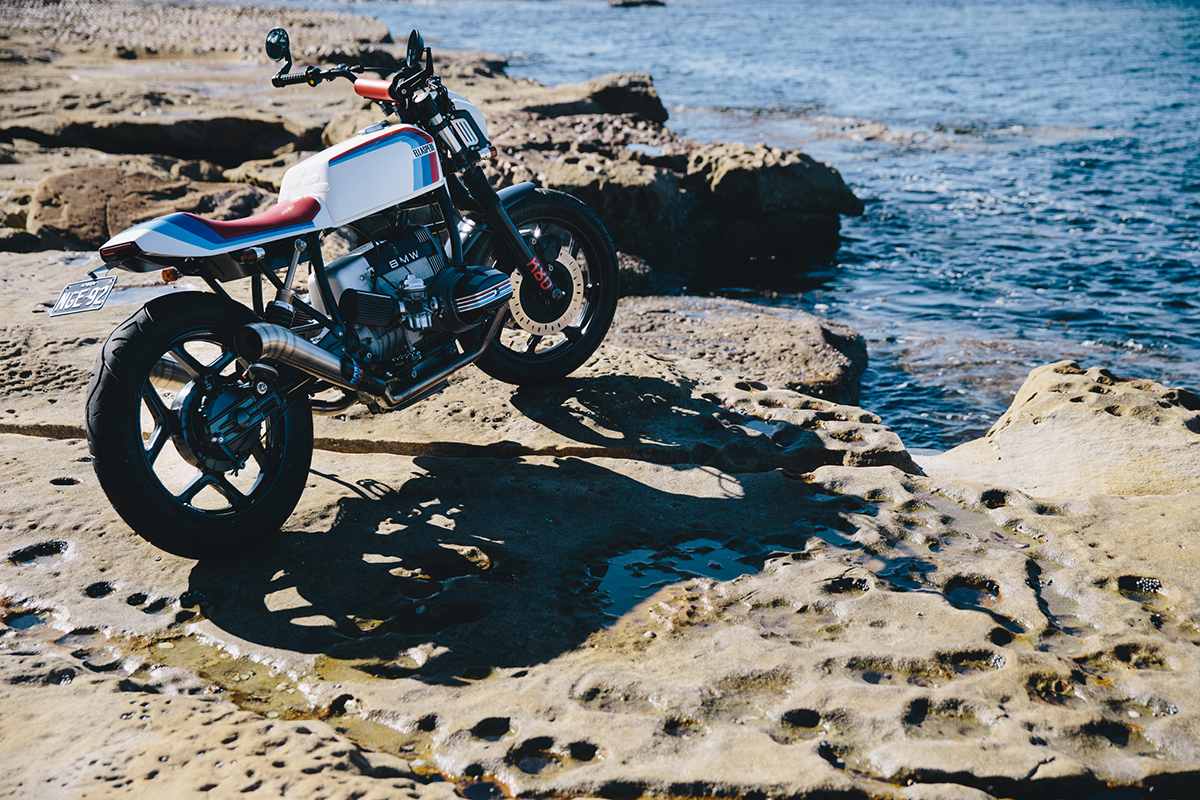 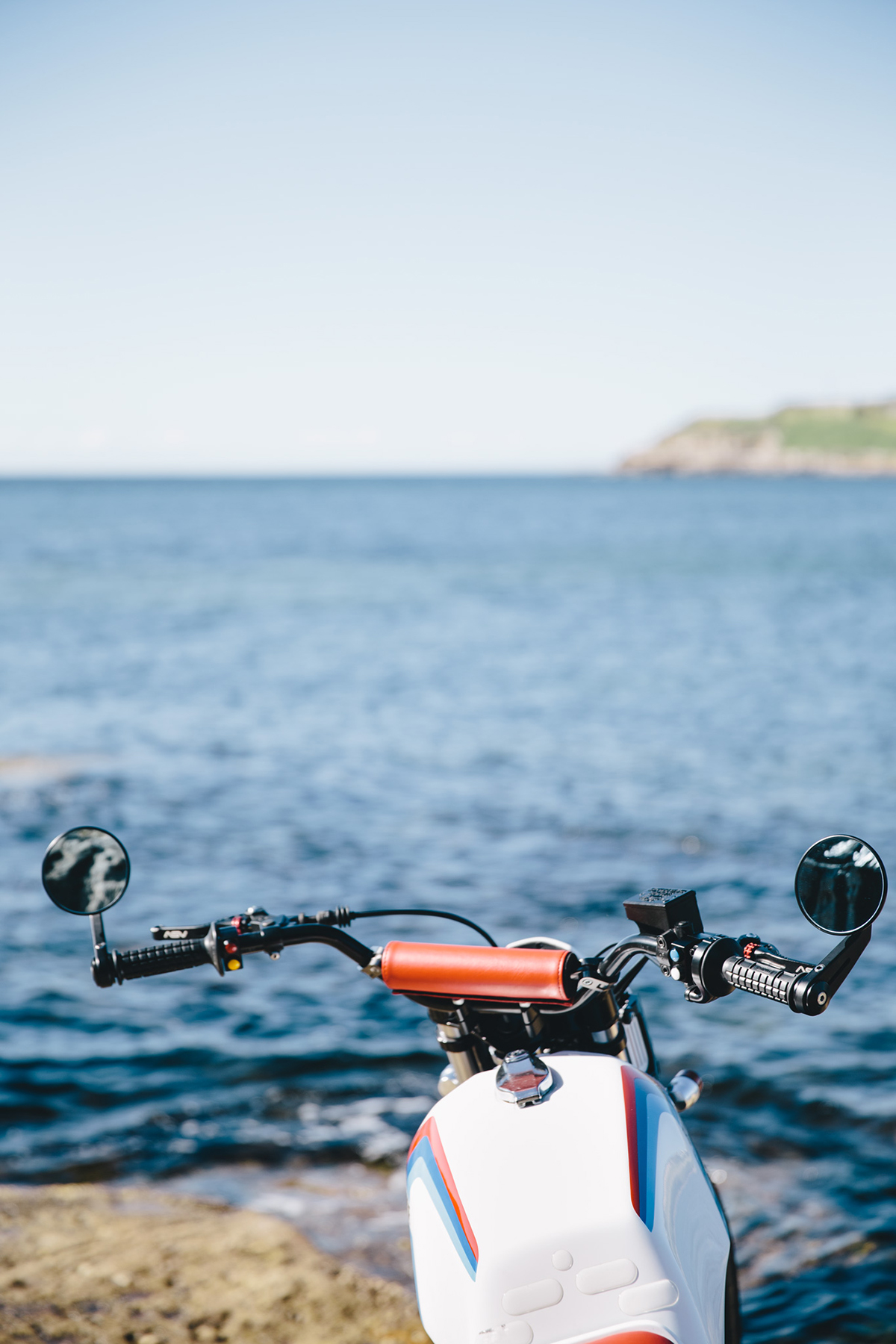 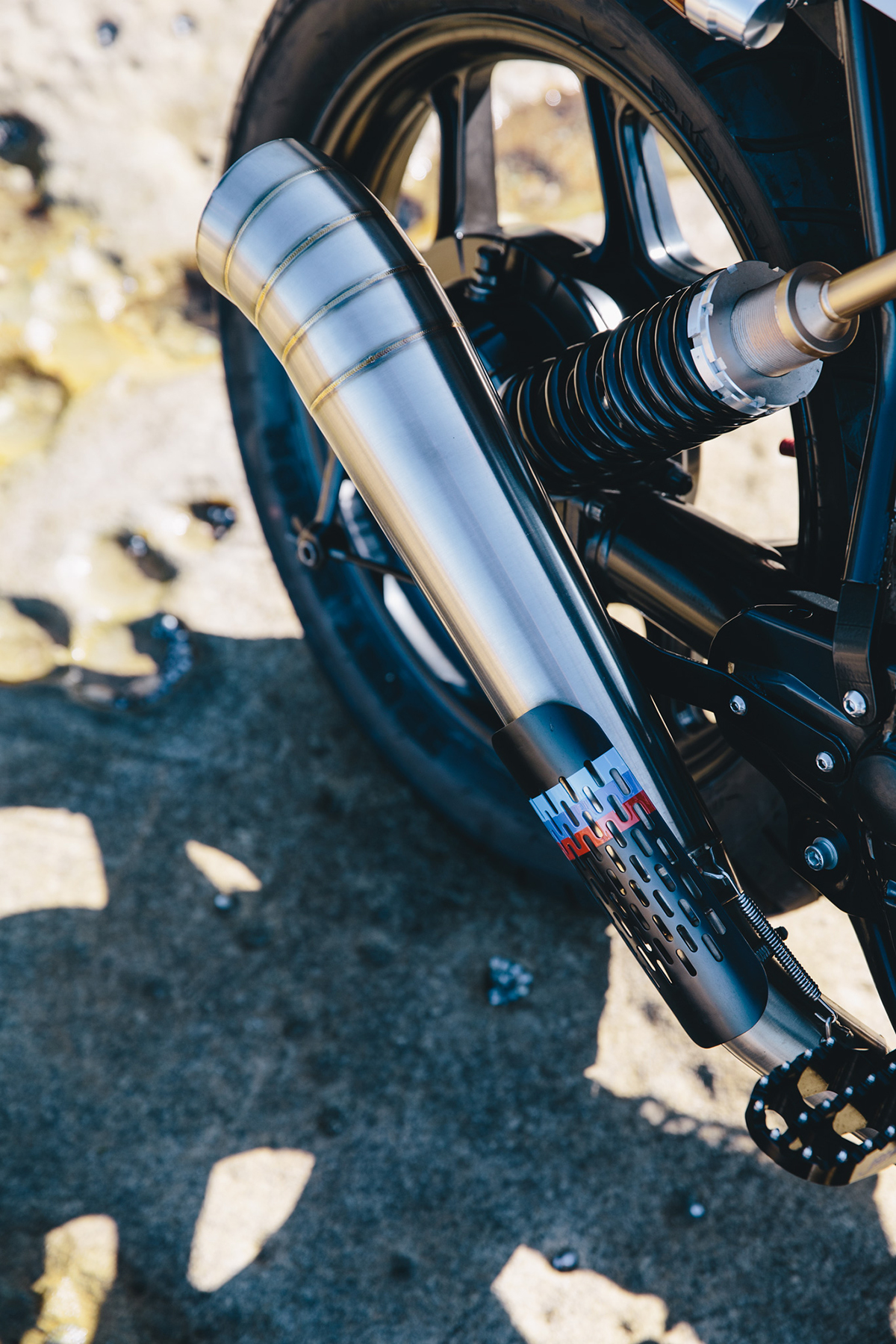 Each part for the build was carefully considered in both regards to quality, and the style of the final product. After struggling to find a headlight design that Chris thought was worthy for such a build, they began to experiment with different sizes and concepts. “We even toyed with the idea of a rectangular ‘80’s Kawasaki styled headlight. In the end, Ellaspede suggested this LSL unit. Initially, I thought it didn’t fit the look at all. However, the more I stared at it, the more it grew on me and the more I loved it! It’s probably the thing I like most about this build, but it polarises people – some think it wrecks the bike, while others think it makes it. Luckily I love it!” 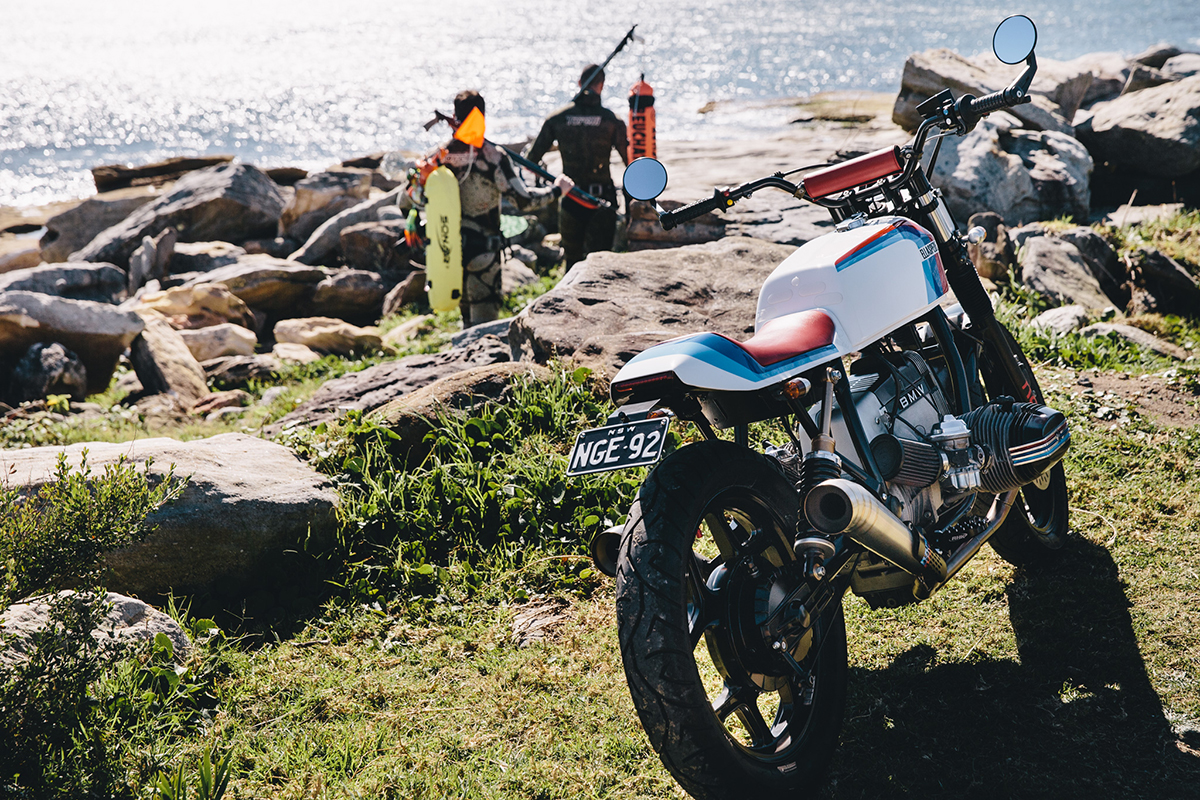 After the minor headlight dilemmas, the bike was now complete. The result is a sterling example of mixing a 1980’s bike with some more modern parts and pieces. It’s a colourful and enjoyable bike not only to look at – but to ride. The BMW M Sport colour scheme is brilliant, with accents of the scheme placed in parts on the exhaust, rocker covers and integrated into the custom leather of the seat. The modern styled headlight brings this bike into a new field, a lightweight amalgamation of style that’s resulted in a truly head turning machine. 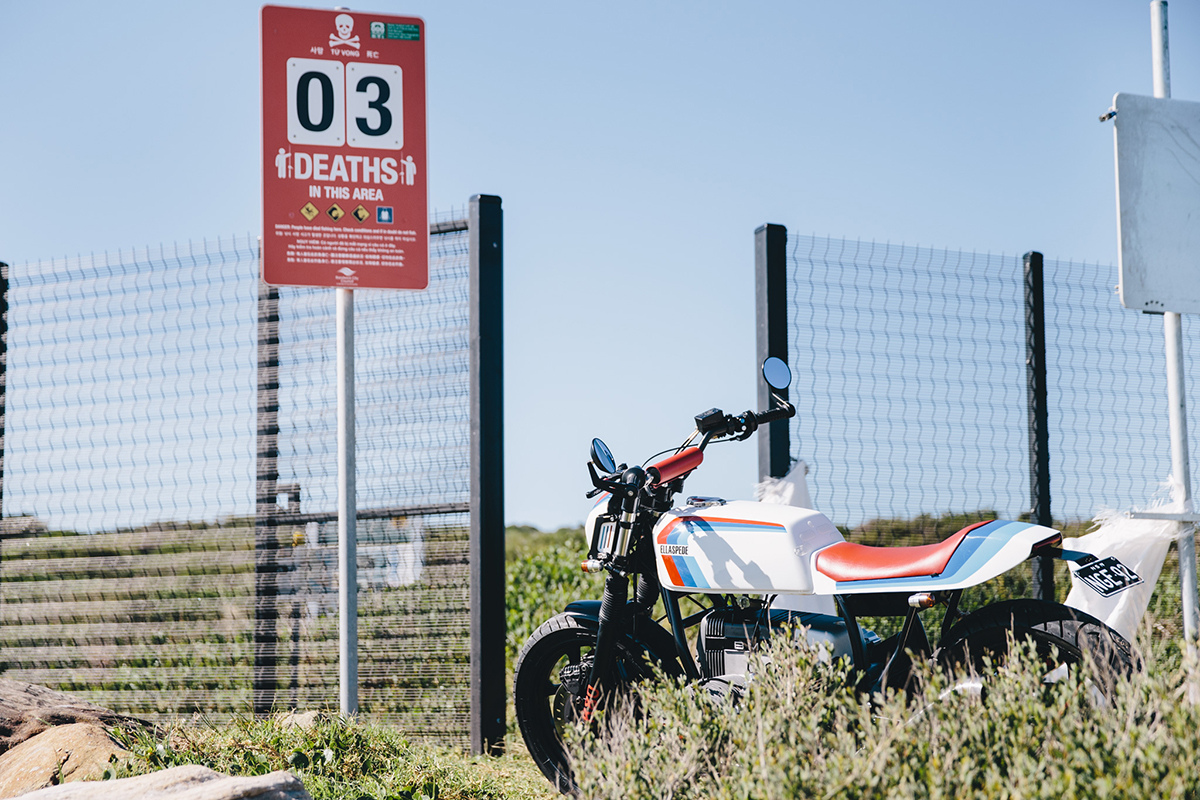 “I picked up the bike in Brisbane and trailered it back to Sydney – unfortunately it was during a 10 hour biblical downpour! I discovered that pod filters capture the rain brilliantly so I had carbs full of watery fuel to drain before I could ride it properly.

Overall the bike has exceeded my expectations – I love the look, the integration of the Motogadget gear works even better than I hoped and there’s some beautifully engineered solutions like the copper wire choke cables on the carbs.

Everywhere it goes it seems to draw a crowd – it seems lots of people have a soft spot for airheads!” 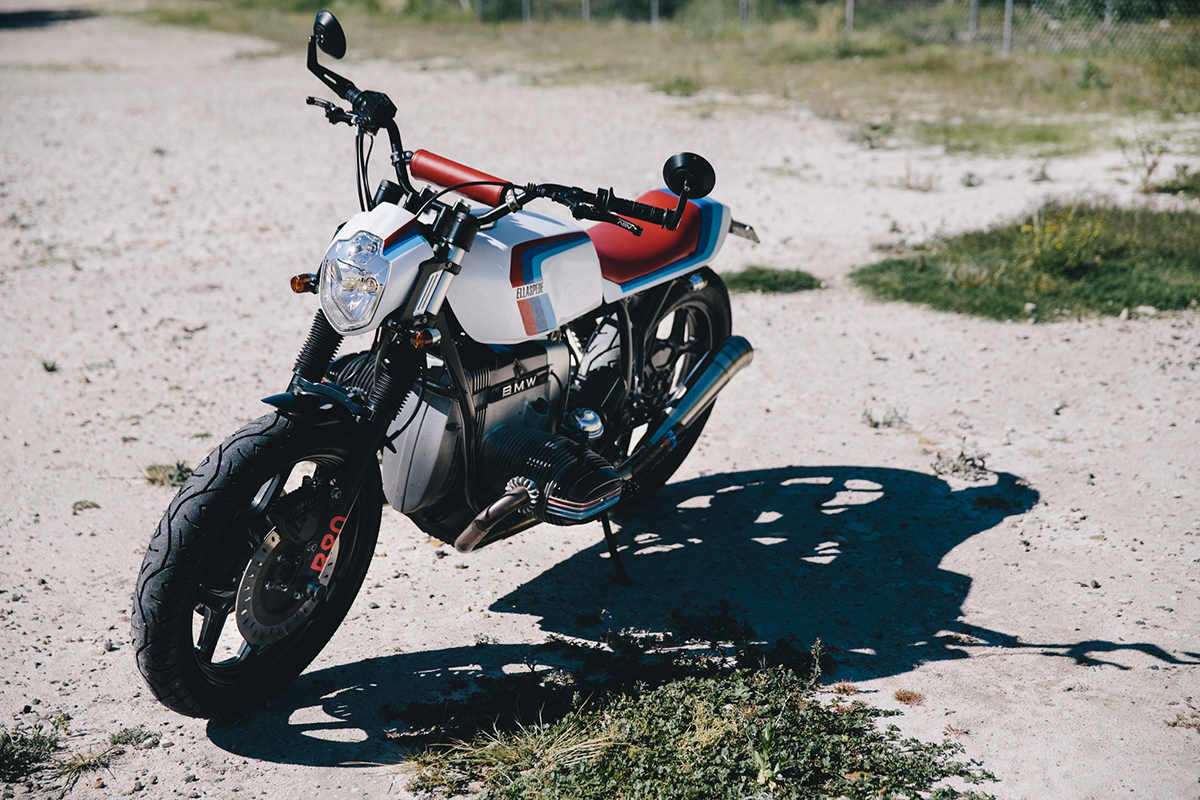