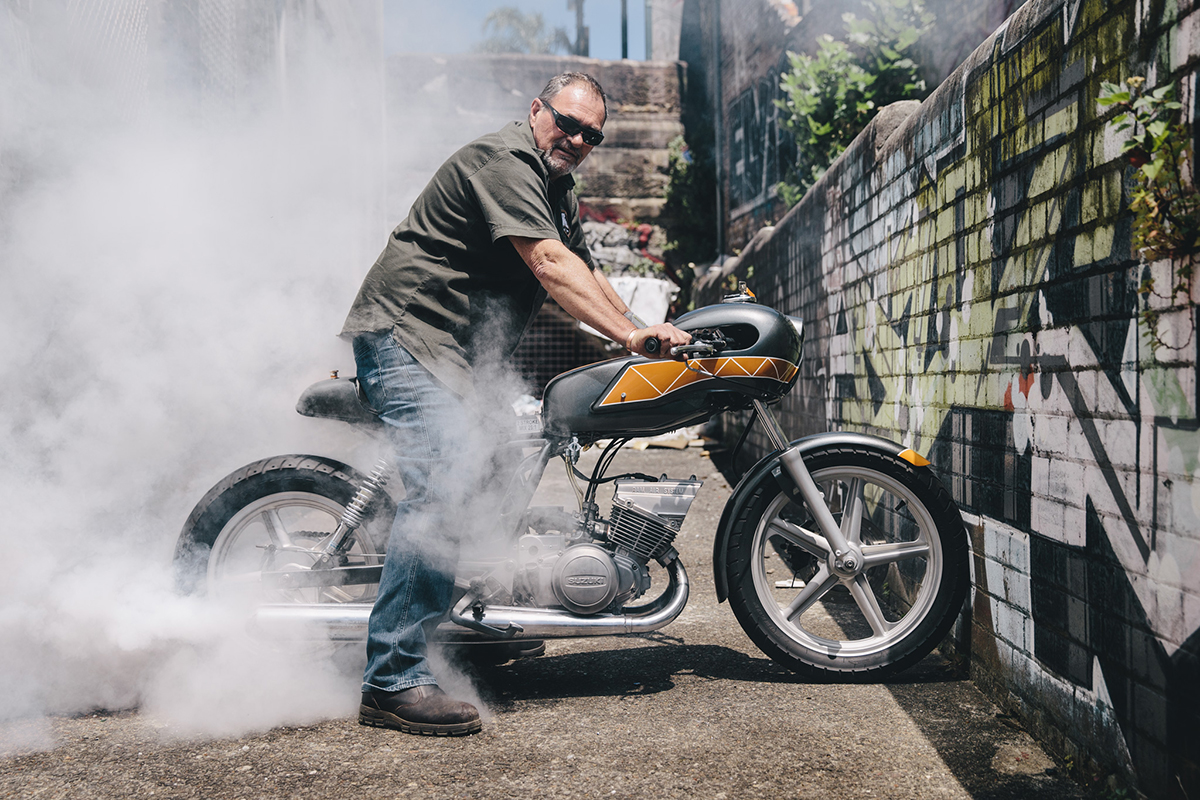 Taking its namesake after the old streamline trains that sped across train tracks decades past, The Loco is a marriage of two motorcycles that had seen better days. With their powers combined, this new machine went on to take out 1st place in the 2016 Deus Bike Build Off. 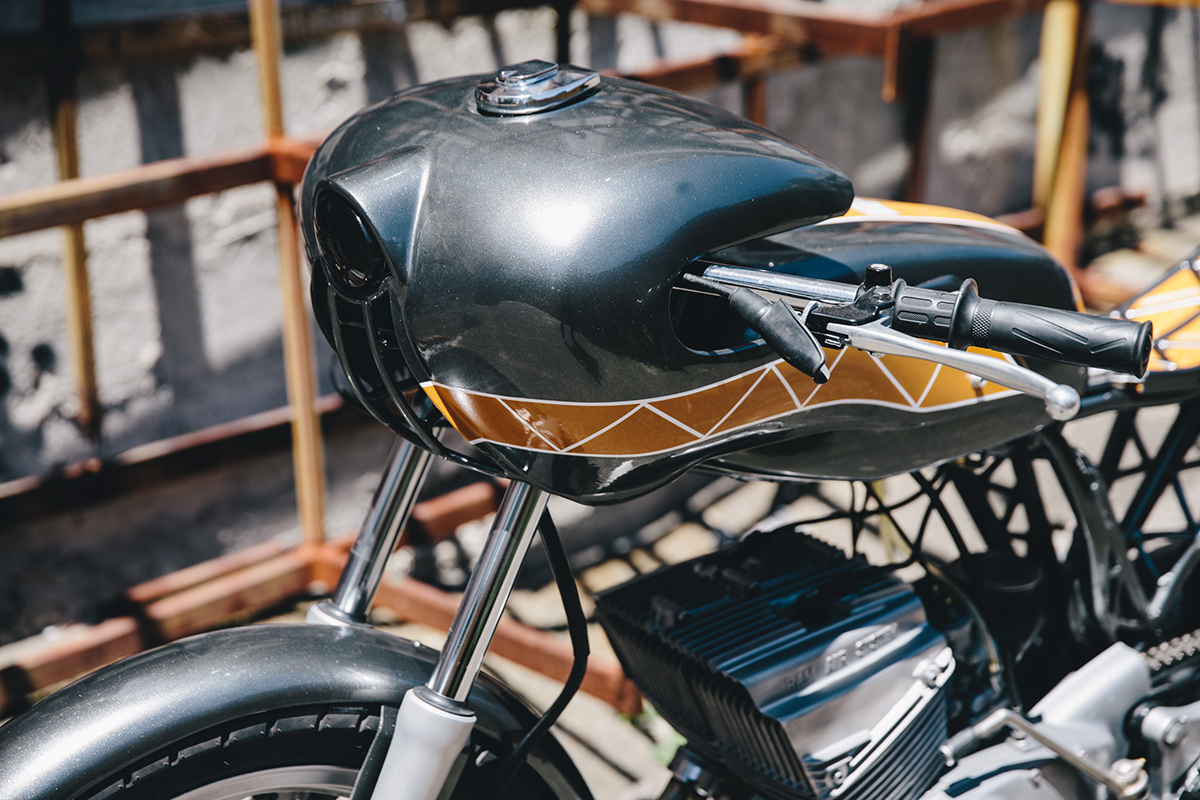 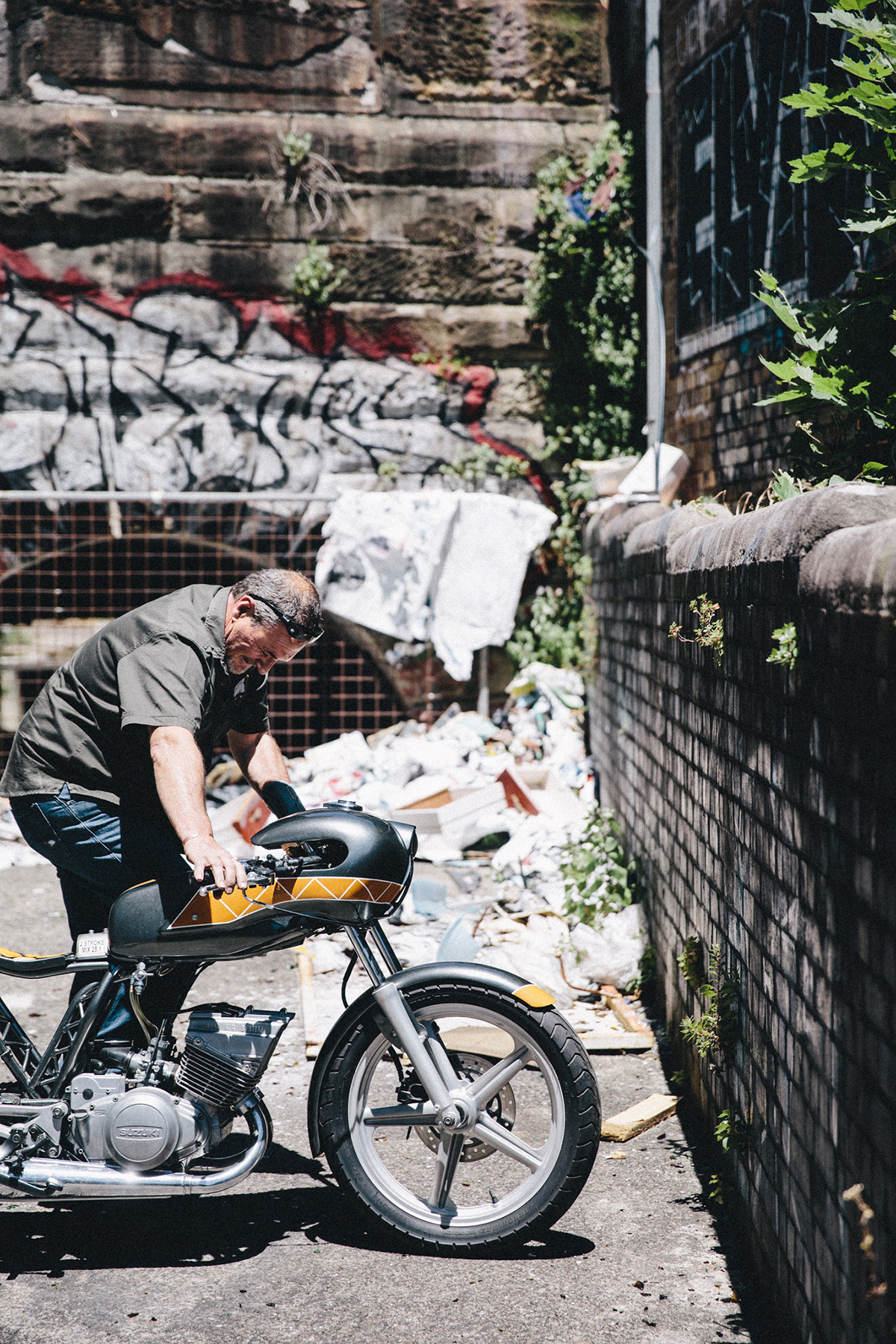 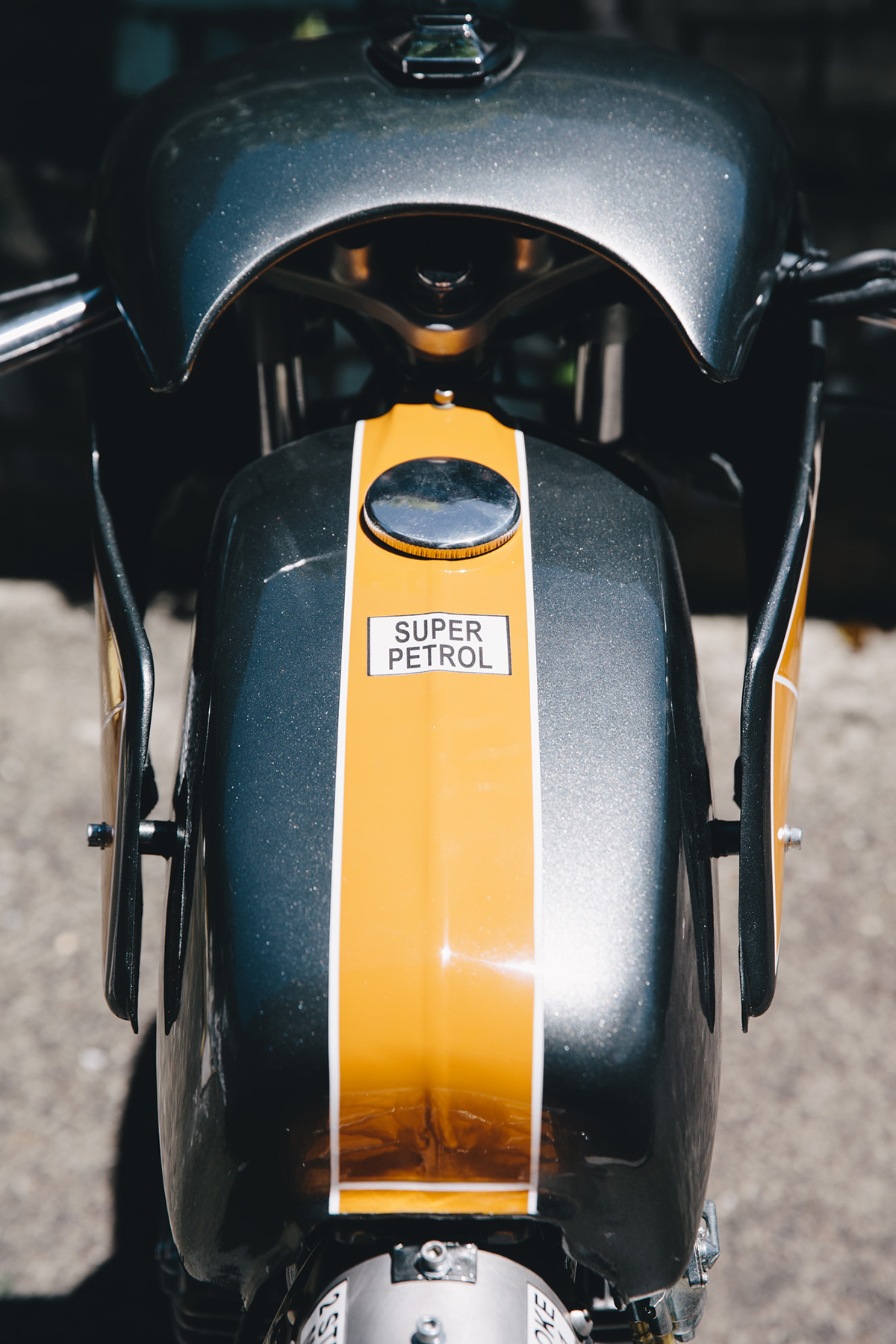 For this machine, life would start as two separate wrecks that were to be scrapped – Steve and his Grandson Riley had other plans however. “The bike is composed mainly of a Honda CB250 and a Suzuki GT250. The CB250 had been skidded down the road and sported cracked engine cases and a bent frame. The GT250 was left under a tree for years, but the motor still turned over. We decided to make the most of these neglected machines and combine them together.” 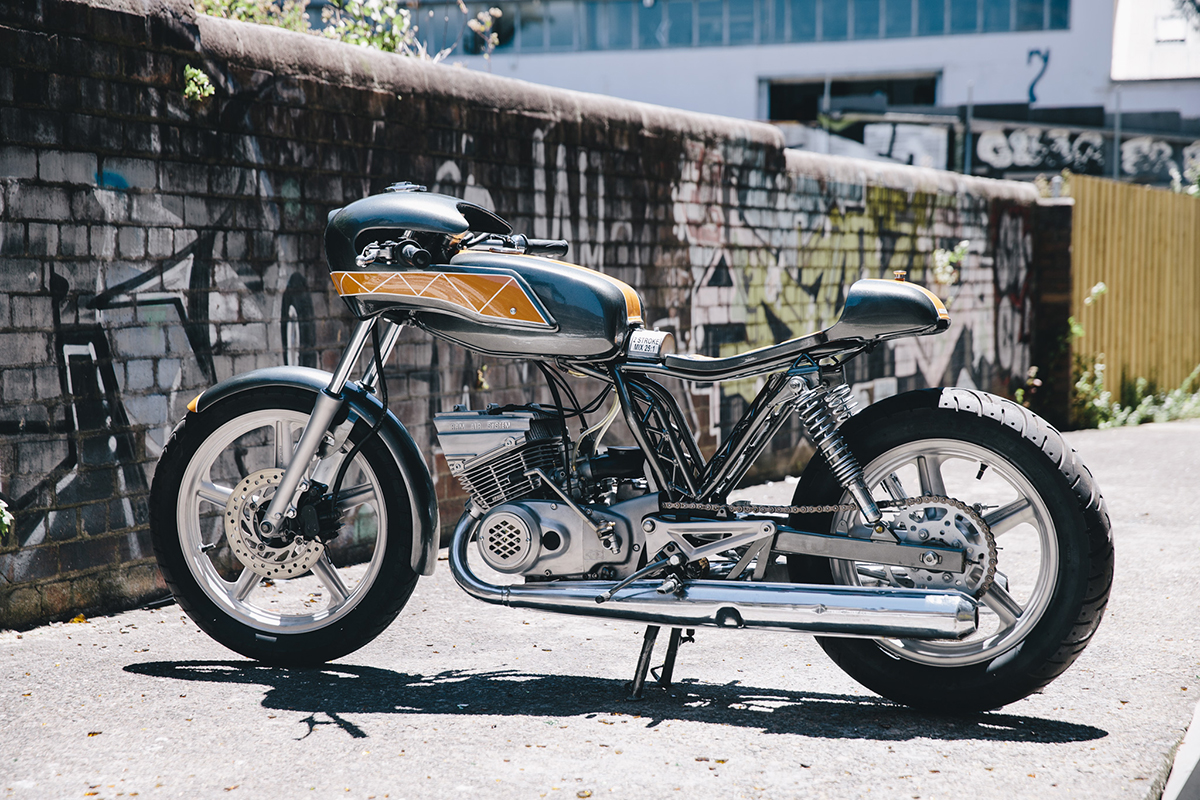 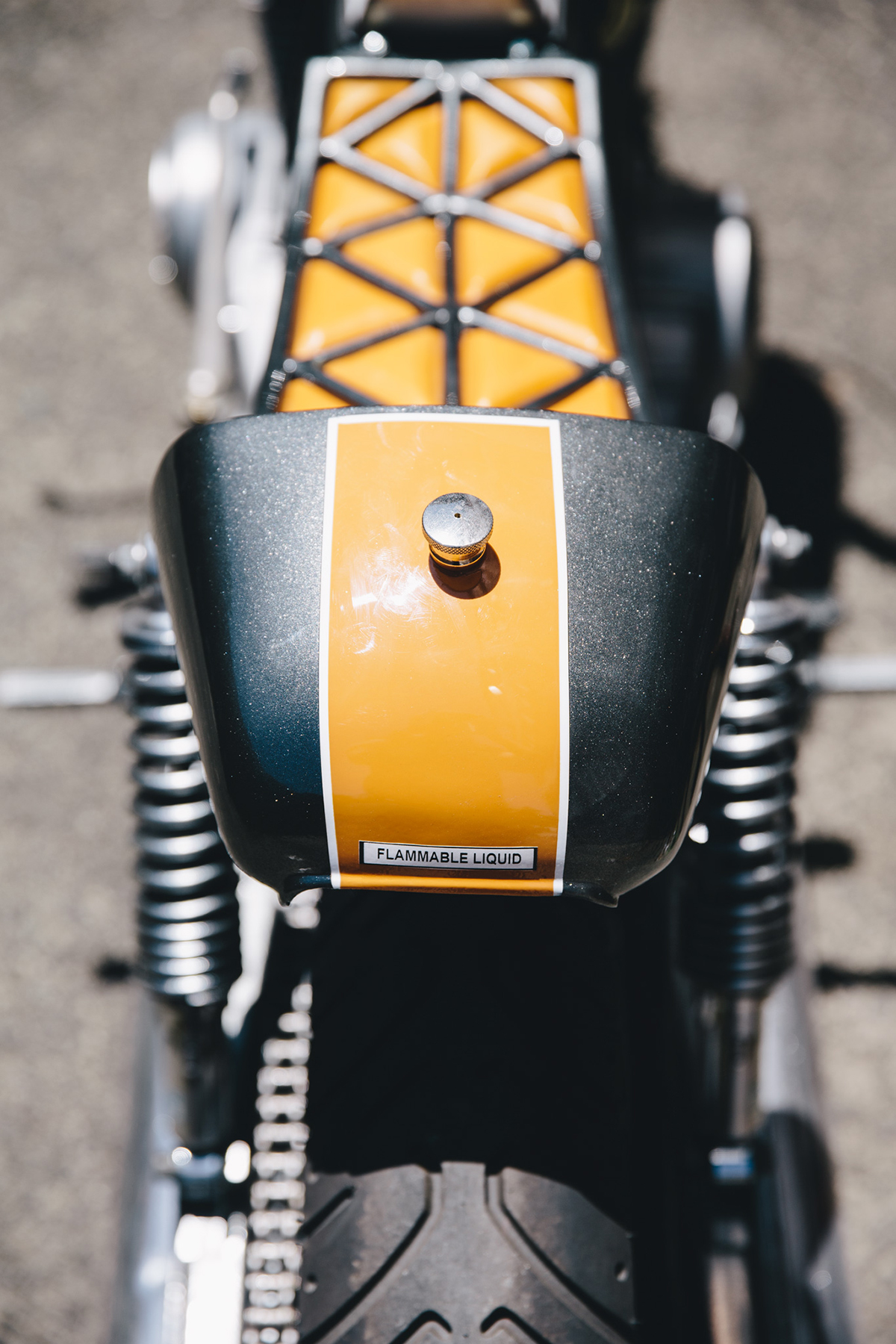 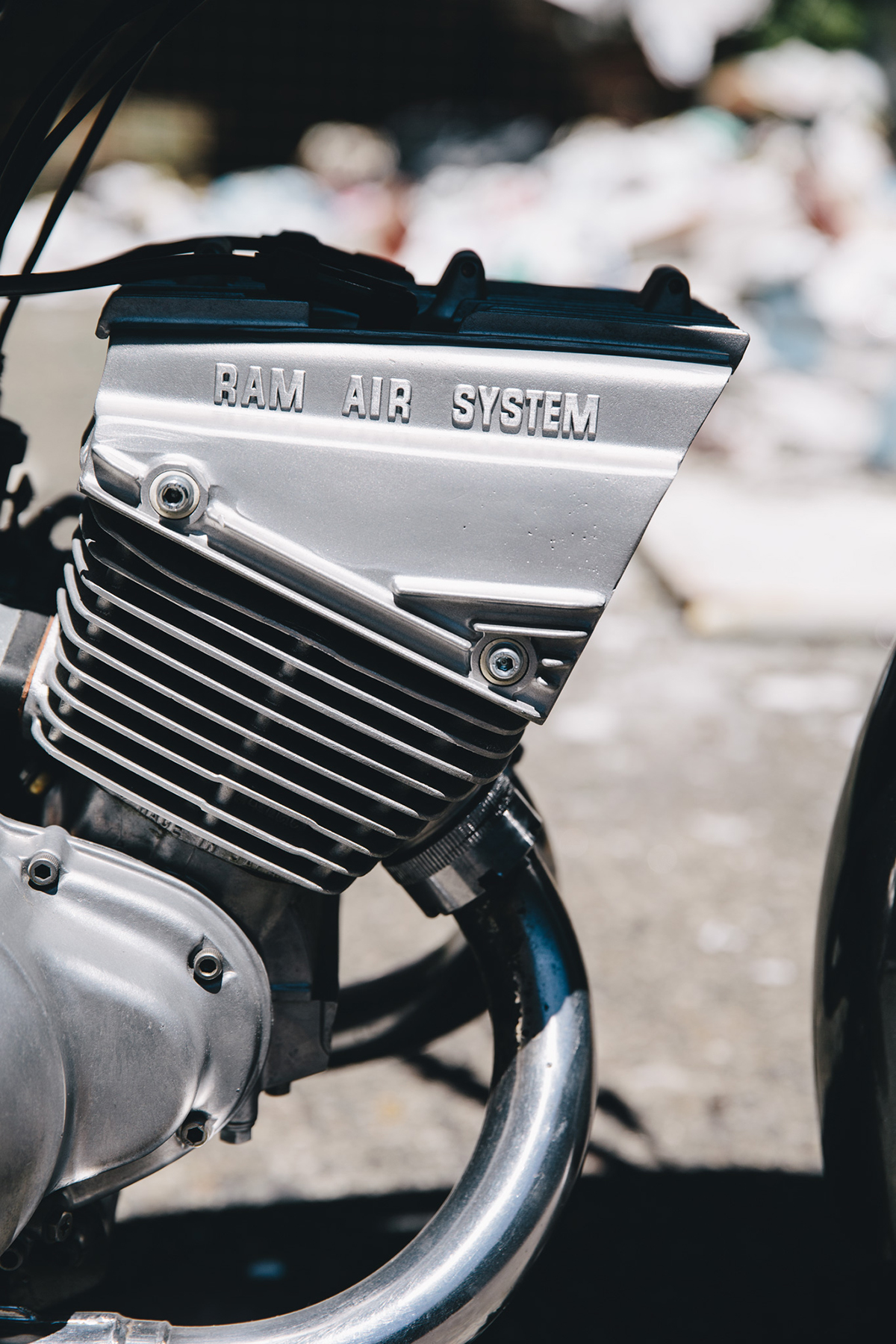 Firstly, the CB frame had to be modified to support the head stem and motor from the GT250. “I used a bridge work design to strengthen the frame, and then followed through with the same design which you’ll find on the seat as well as the paint scheme” Fitting this donor engine into it’s new home would prove to be the biggest challenge for this ambitious build. “Getting the GT250 engine to line up with the rear sprocket and so that it would clear the swing arm would be a task and a half. We had to make a rear sprocket to get the height so that the chain didn’t drag too much on the swing arm. Thankfully, ZPower Australia had a box full of NOS sprockets that I went rummaging through until I found one with the correct wheel fitment. I found another that had 41 teeth, so I cut the centre out and welded the smaller centre in.” 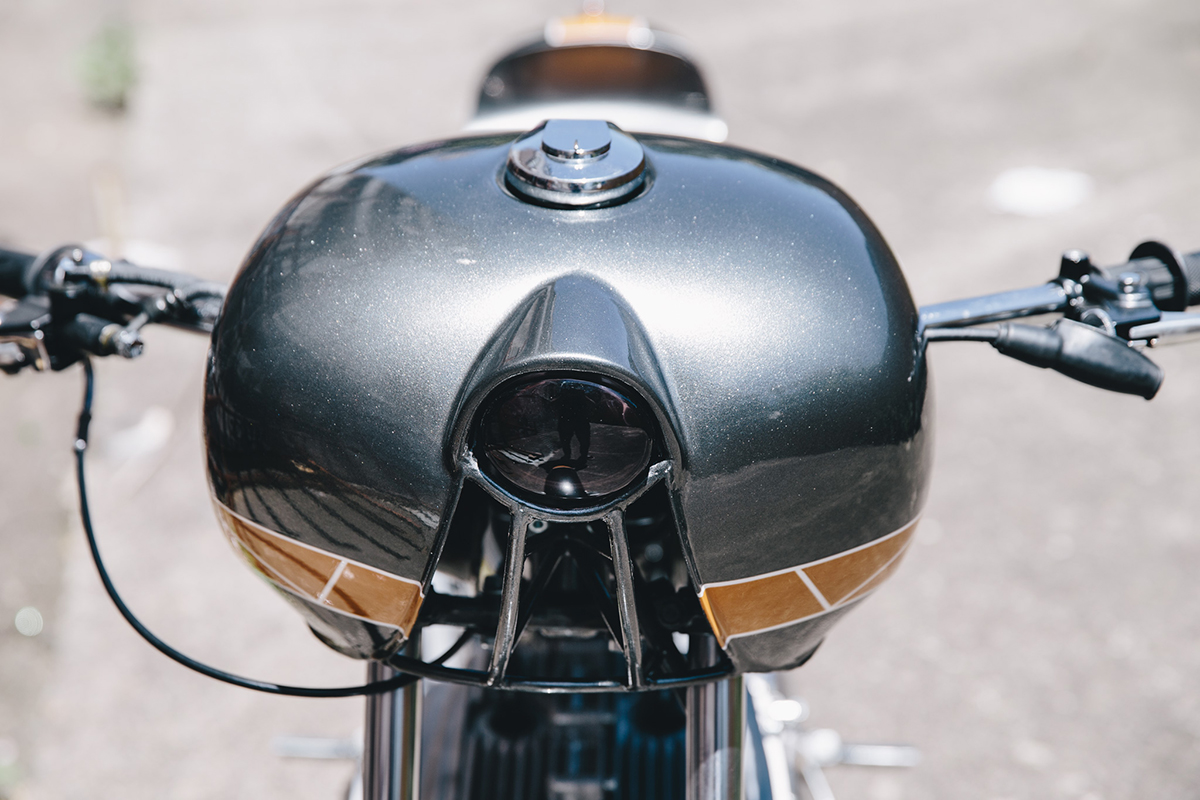 With the major task of the heart transplant done for the bike, Steve could now get to work on the more aesthetic side of this build. Steve’s son Richard had an old XJS tank floating around at his work. Deemed too ugly for anything worthwhile, it was soon to be trashed, but much like the rest of the bike Steve saved it from the bin and got to work seeing if it would be incorporated it into his Deus Build Off Bike submission. 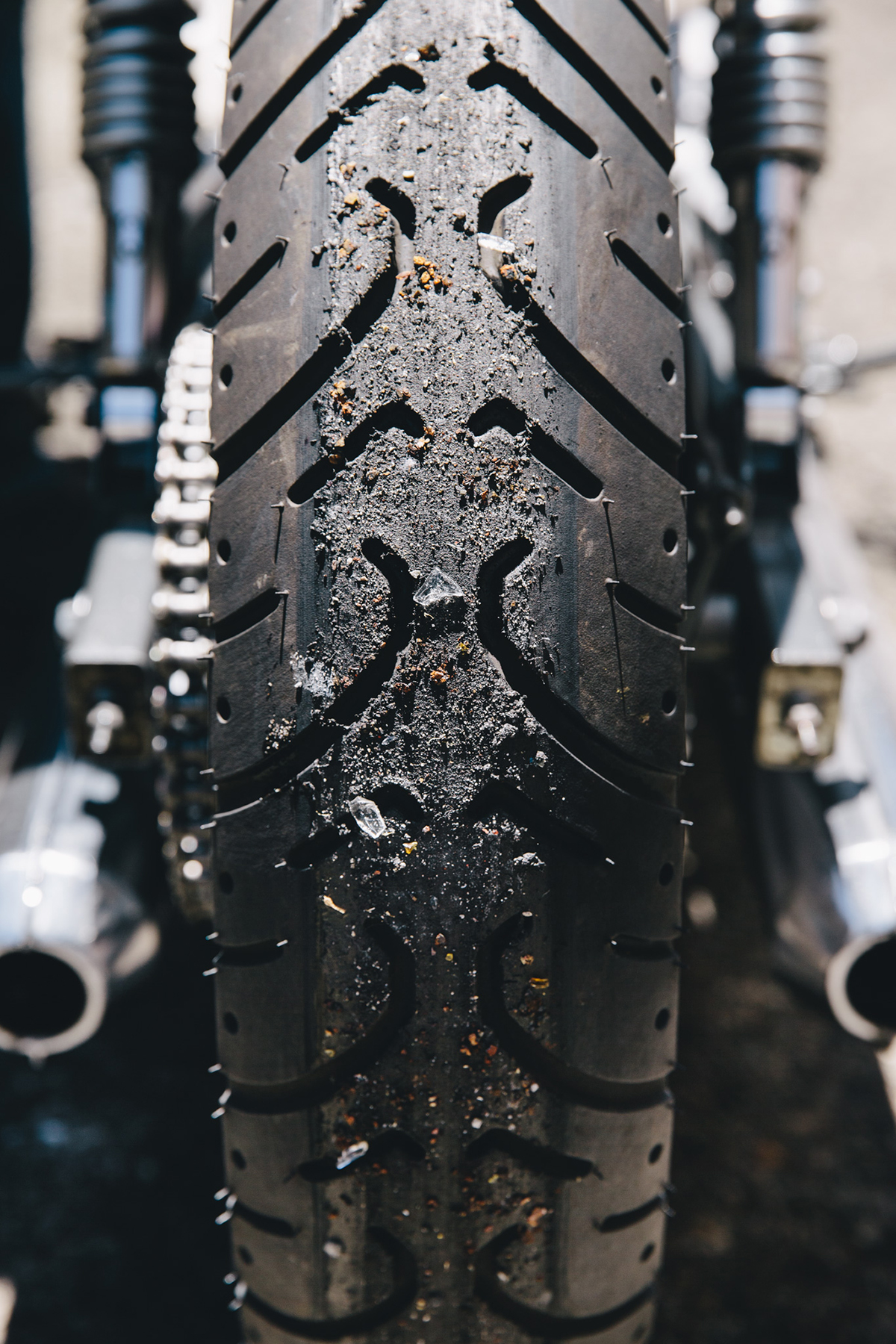 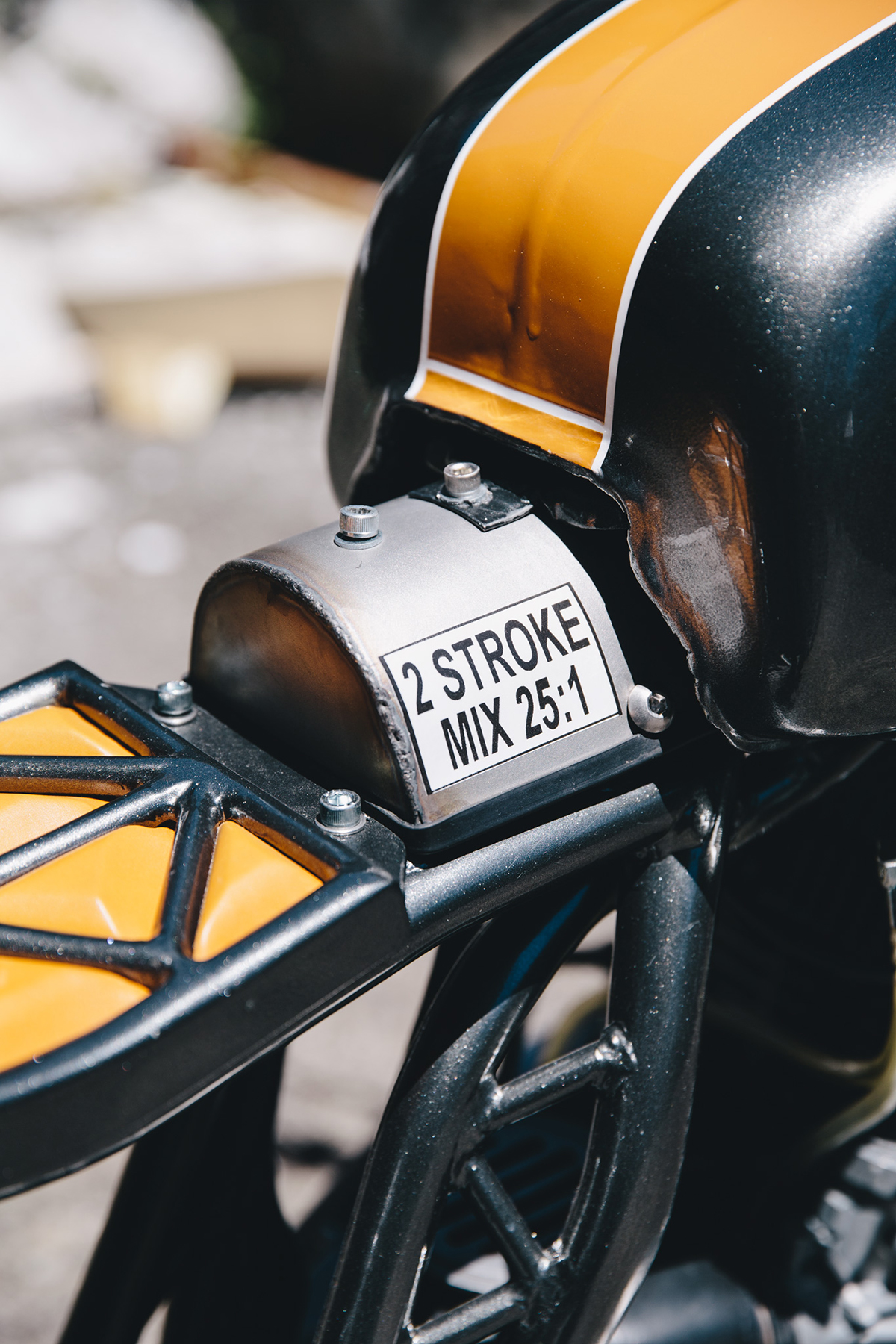 “Due to the size of the tank, my son suggested you could actually make a fairing out of it – and so we thought we’d give it a shot! I cut the XJS tank up, but it just didn’t suit the build, so it’s destiny was once more for the scrap heap. The CB250 bike came with a tank in good shape, so I decided to give it another go and cut it up – sure enough it fitted nicely. The fairing was a big task to try and keep the tank shape and still have some sort of turning circle, two nights before we had to load the bike onto trailer and head off, a couple of mates called around to help get the bike off the work bench. We soon found out there was nil turning circle! We all then spent hours trying to figure out how to get the handlebars to turn just a bit more in the faring, but it just wasn’t going to happen. The boys went home so I got to work and made another set of handle bars – all done and dusted by 2am!” 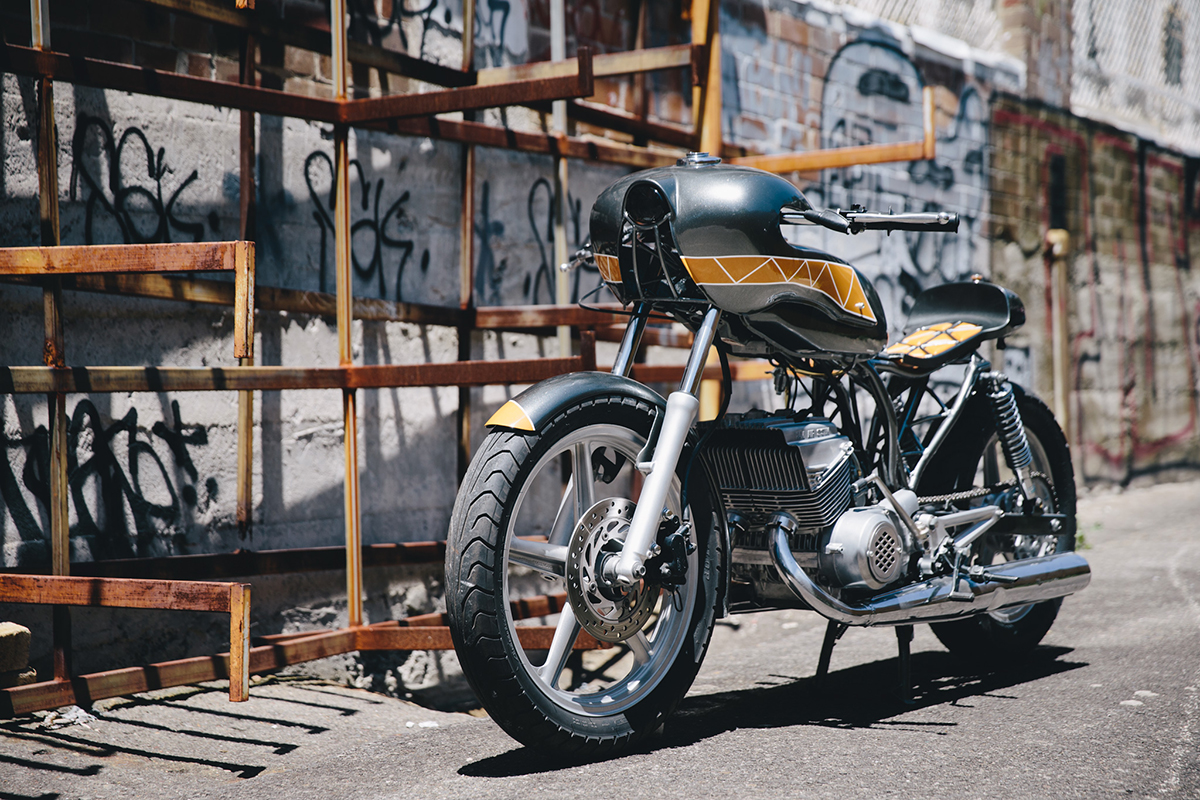 One week before the big show, Steve got cracking with the paint work and the finishing touches to the motor. Four nights of painting later and the motor was alive. However there would be one slight hiccup, as the carbi kits that were initially put in were all the wrong size jets, needle and float. “I learned a good lesson – always check against old parts! We worked out these gremlins and the bike was now ready to made the trip for the bike show. We managed to take out 1st place, which made all the time in the shed definitely worthwhile! I love the engine and the long straight pipes on this bike, along with the hidden ignition switch under the gas cap on the fairing.” 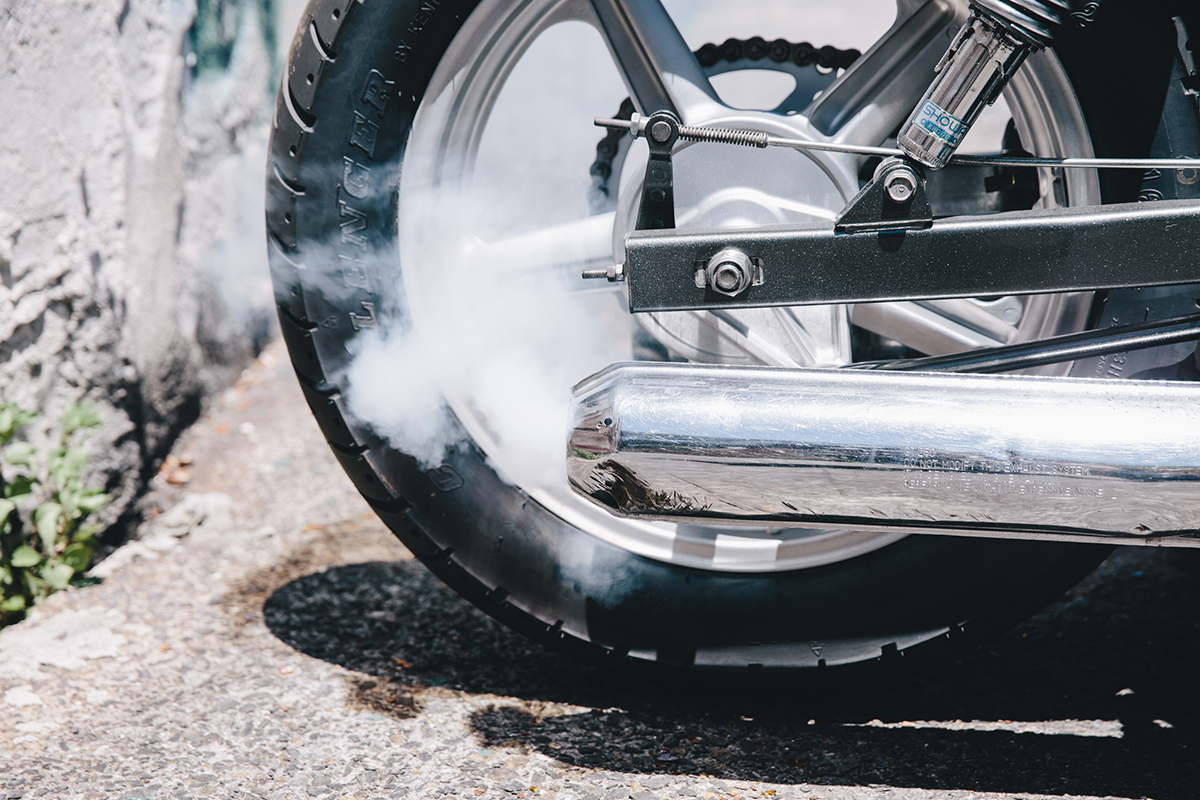 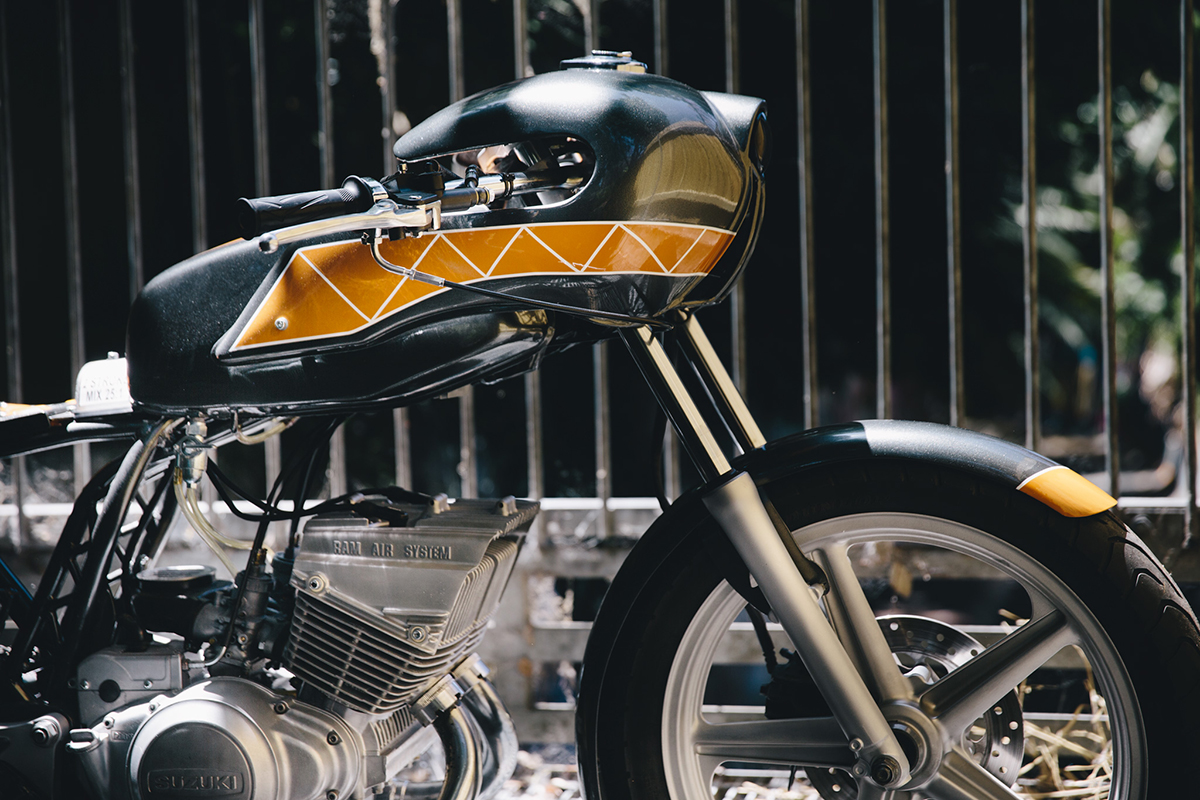 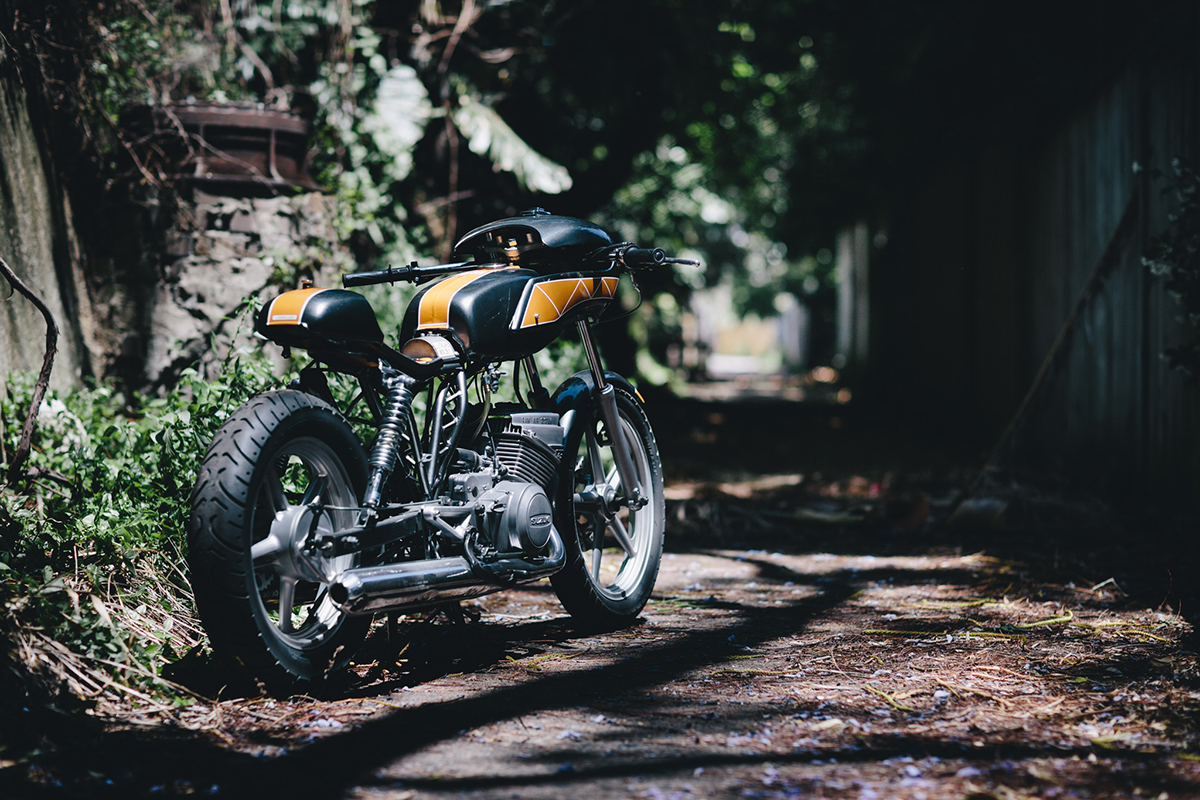 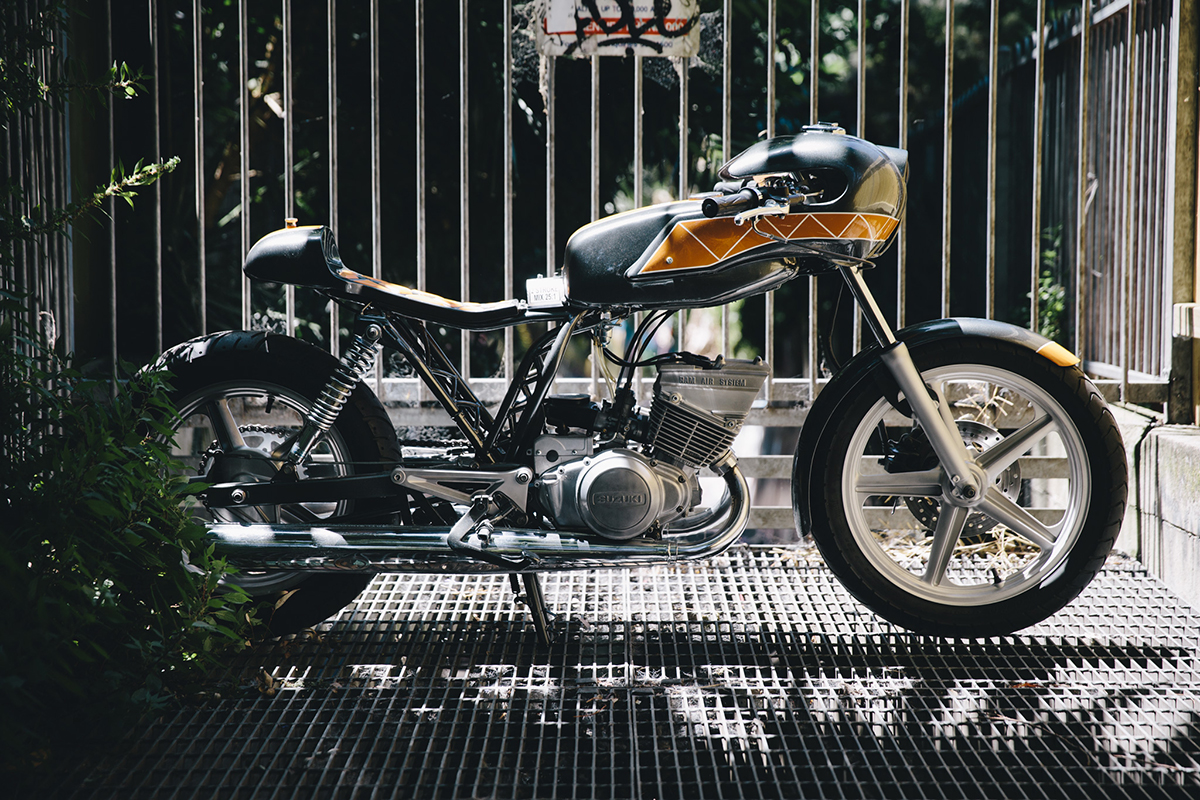