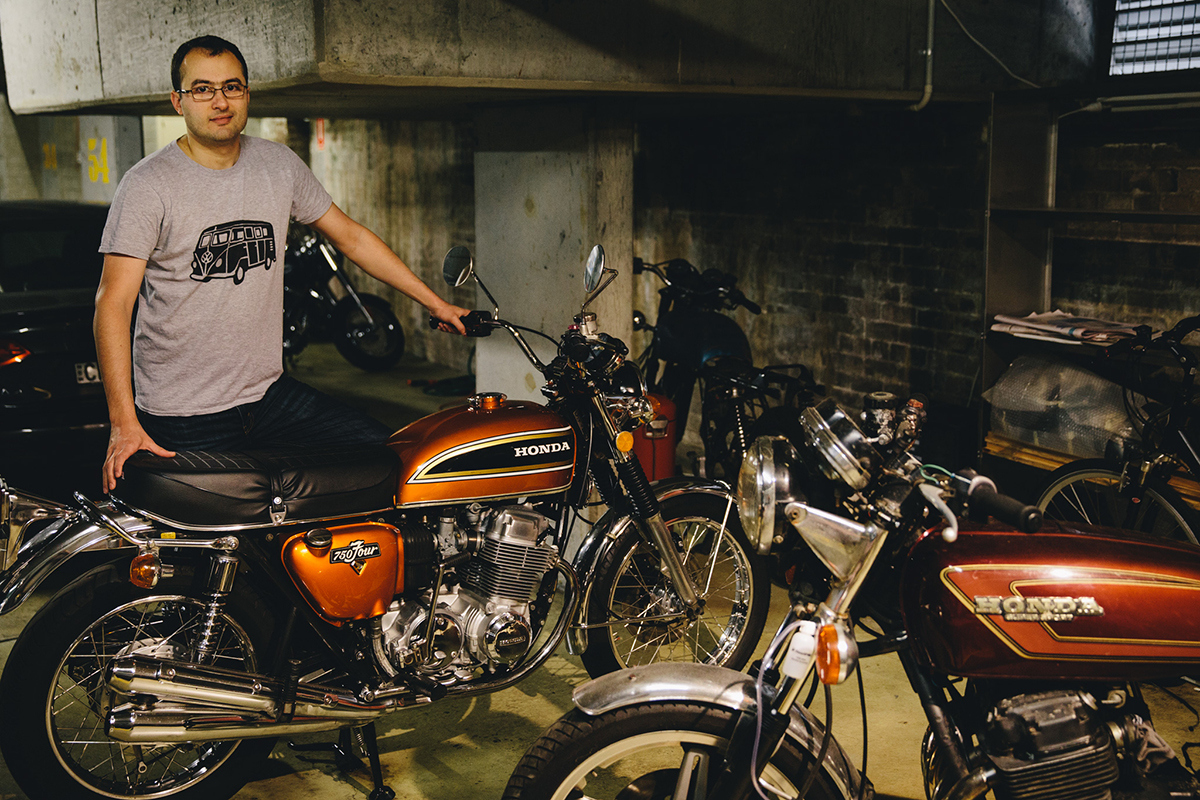 Much like the Flu and the Macarena, passion can be highly contagious. It’s this contagious passion that you’ll immediately find yourself in the grips of if you were to be talking about Honda CB750 Fours with Vini – a passion for him that started very early on. 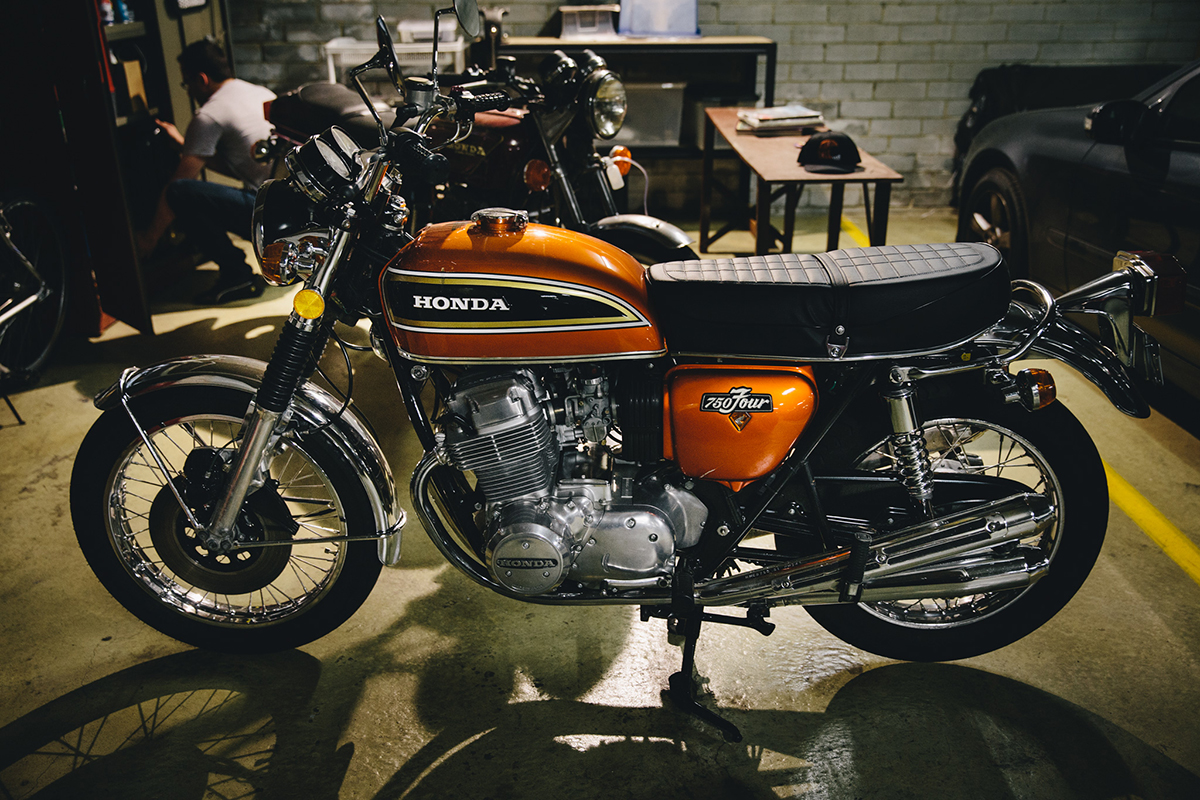 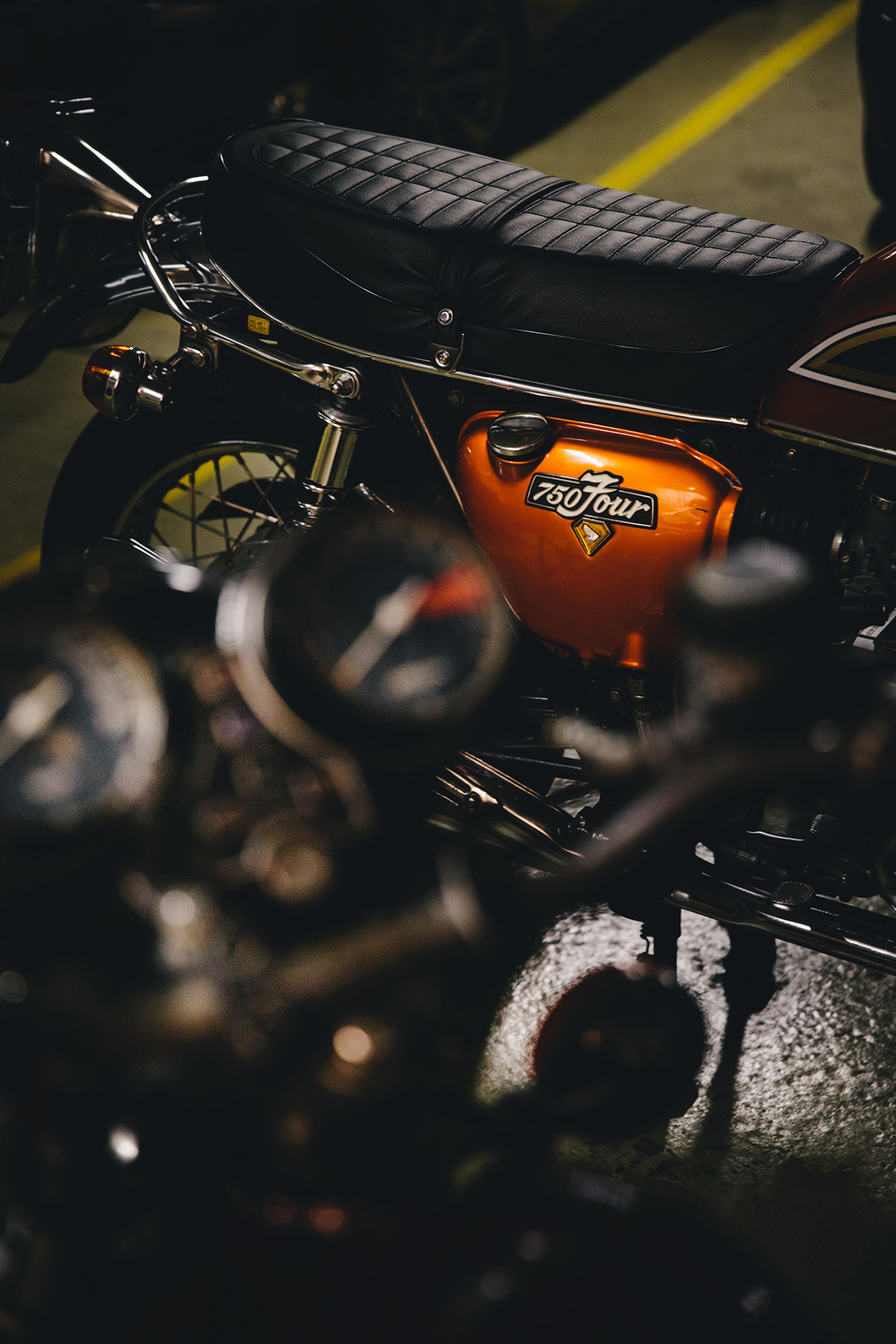 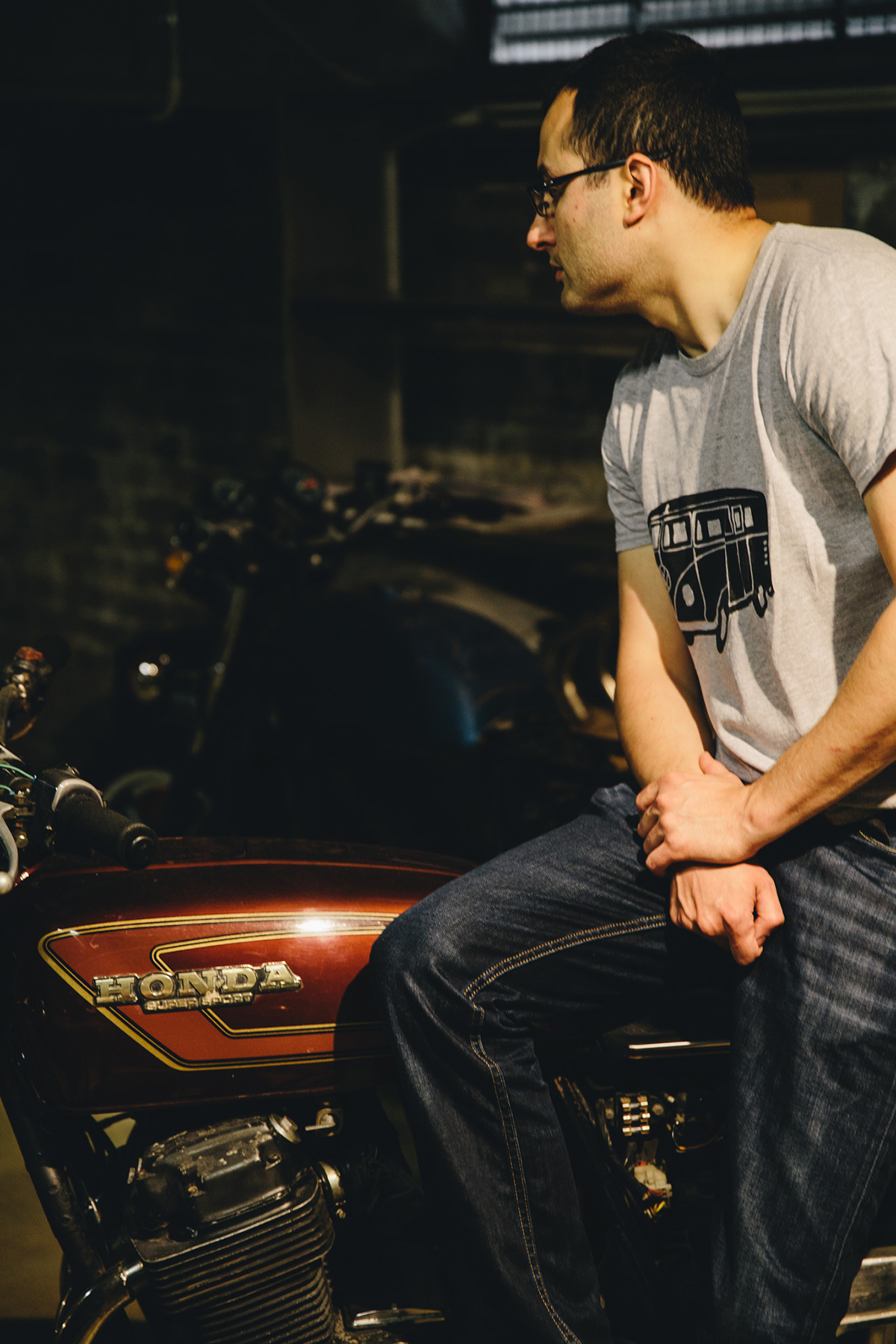 Vini has always been fascinated machines and everything technology based, something that he admits he picked up off his Dad who shared the same curiosity. Anything that could be unscrewed, pulled apart and inspected to see how it worked, would be. “My Dad is ultimately responsible for all of this, he has always been into cars, bikes, engines and technology. When he was in his twenties, he used to modify the engines of his cars to get more horsepower out of them; back in the day there weren’t a lot of people doing that. He had easy access to the workshop of a Ford dealership, so he used to go there to use their tools and learn what he could.” 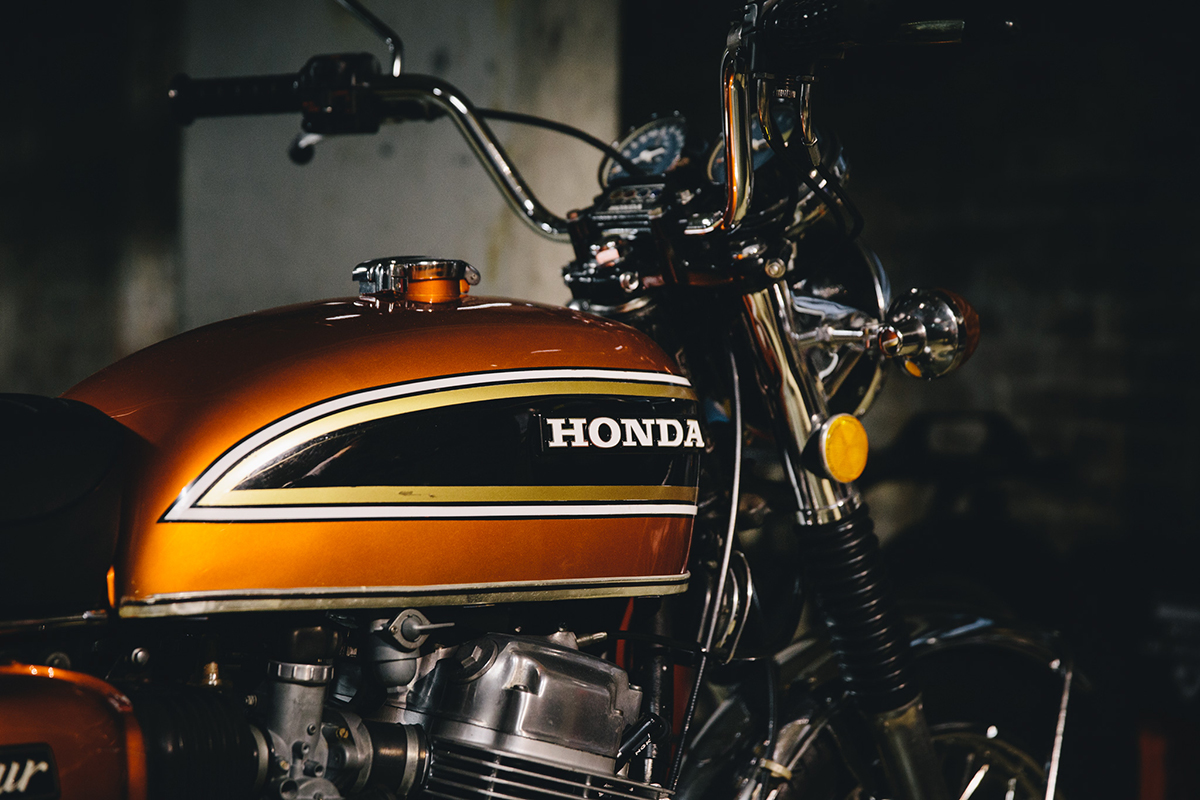 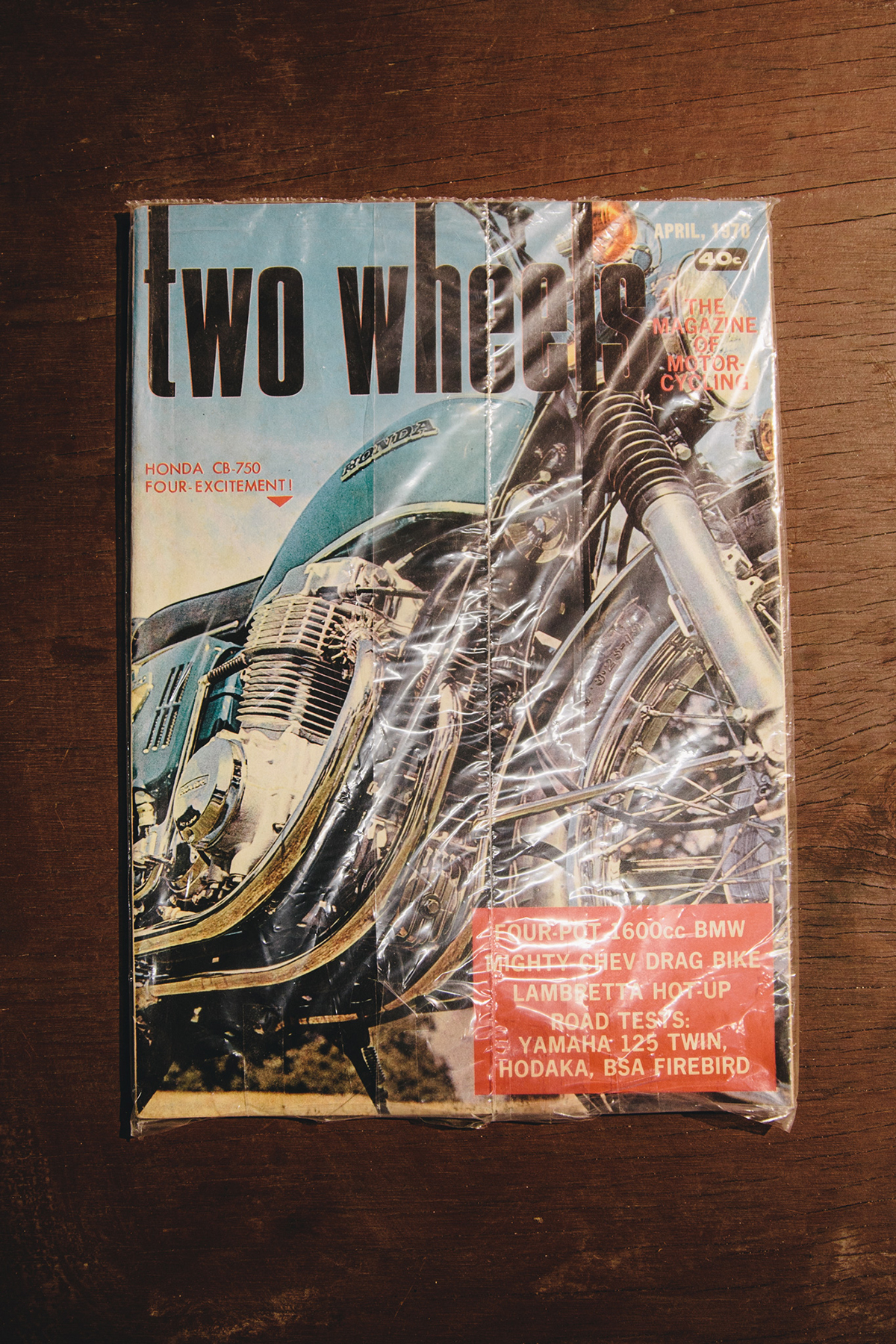 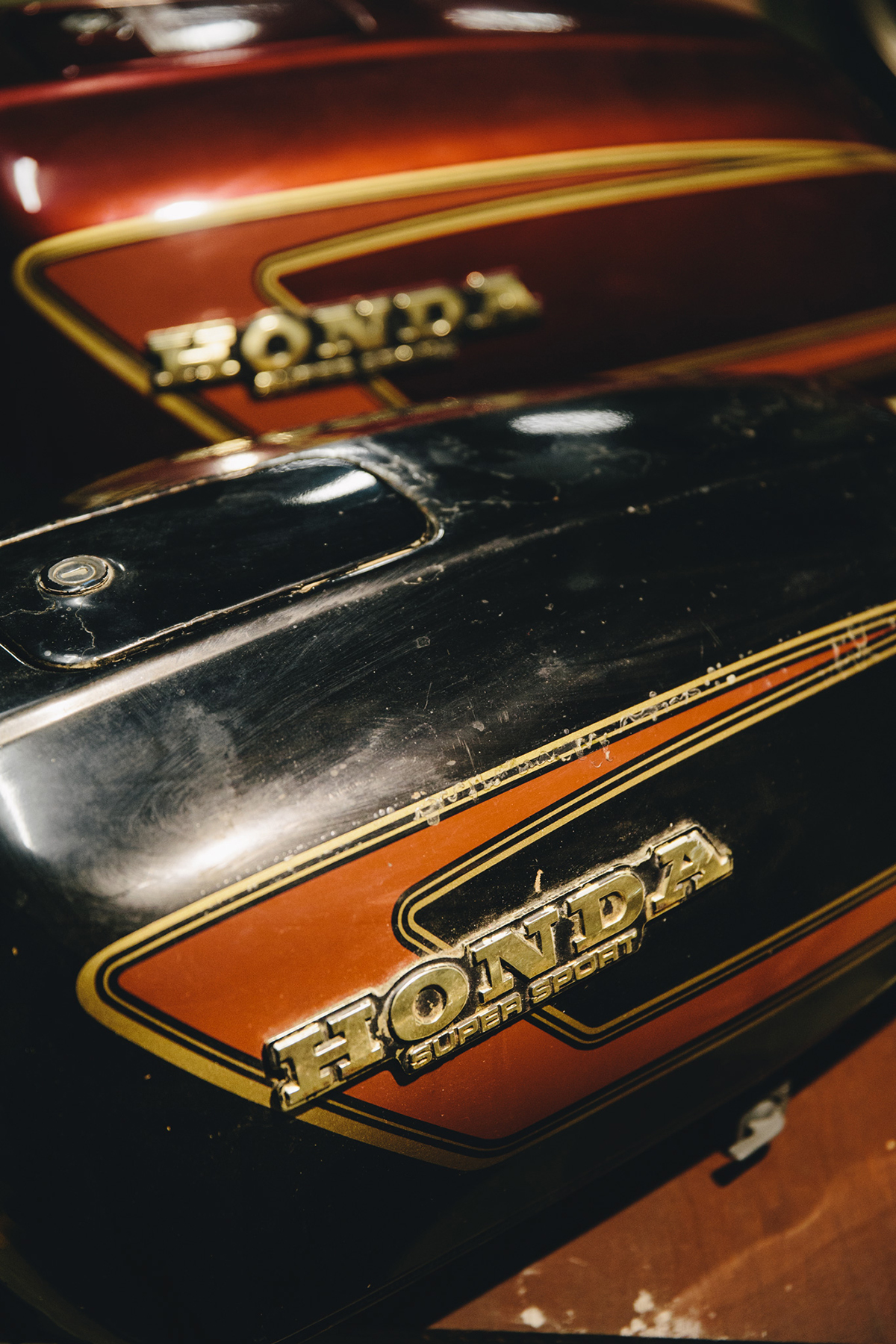 While Vini was still a young lad, his Dad would wax lyrical about bikes from the ‘70’s, and how special some of these machines were. “He told me about how some of these bikes sounded more special than others – that they literally sounded special. There were these bikes in the city where I grew up, the sound of them approaching us would give me that feeling of excitement and I had to find them around me. I was still a kid, and this love for that bike and its sound stuck with me – we used to call them ‘The Four’.” This bike would of course be the Honda CB Four series, with the CB750 the first ever motorcycle to be crowned a “Superbike”. From hereon, every time Vini would hear the special sound from the 4 into 1 exhaust he would be reminded of one thing – he needed to own one of these bikes for himself. 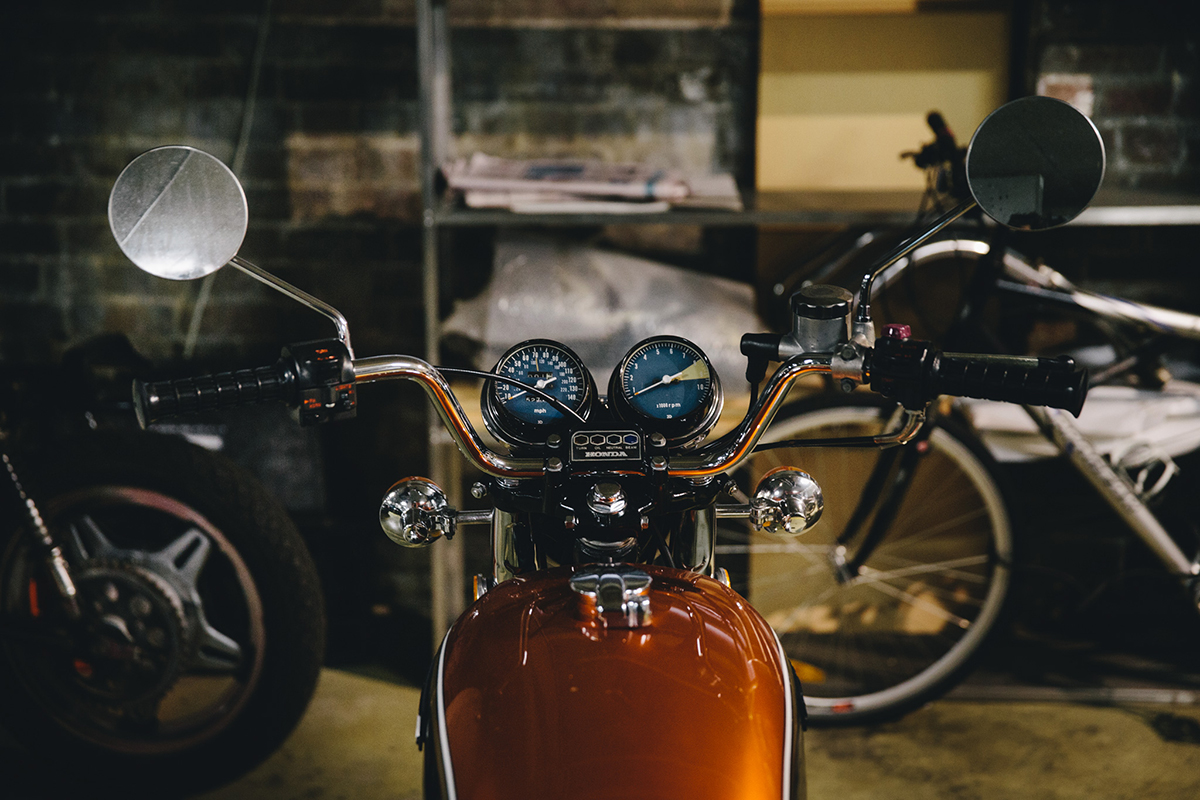 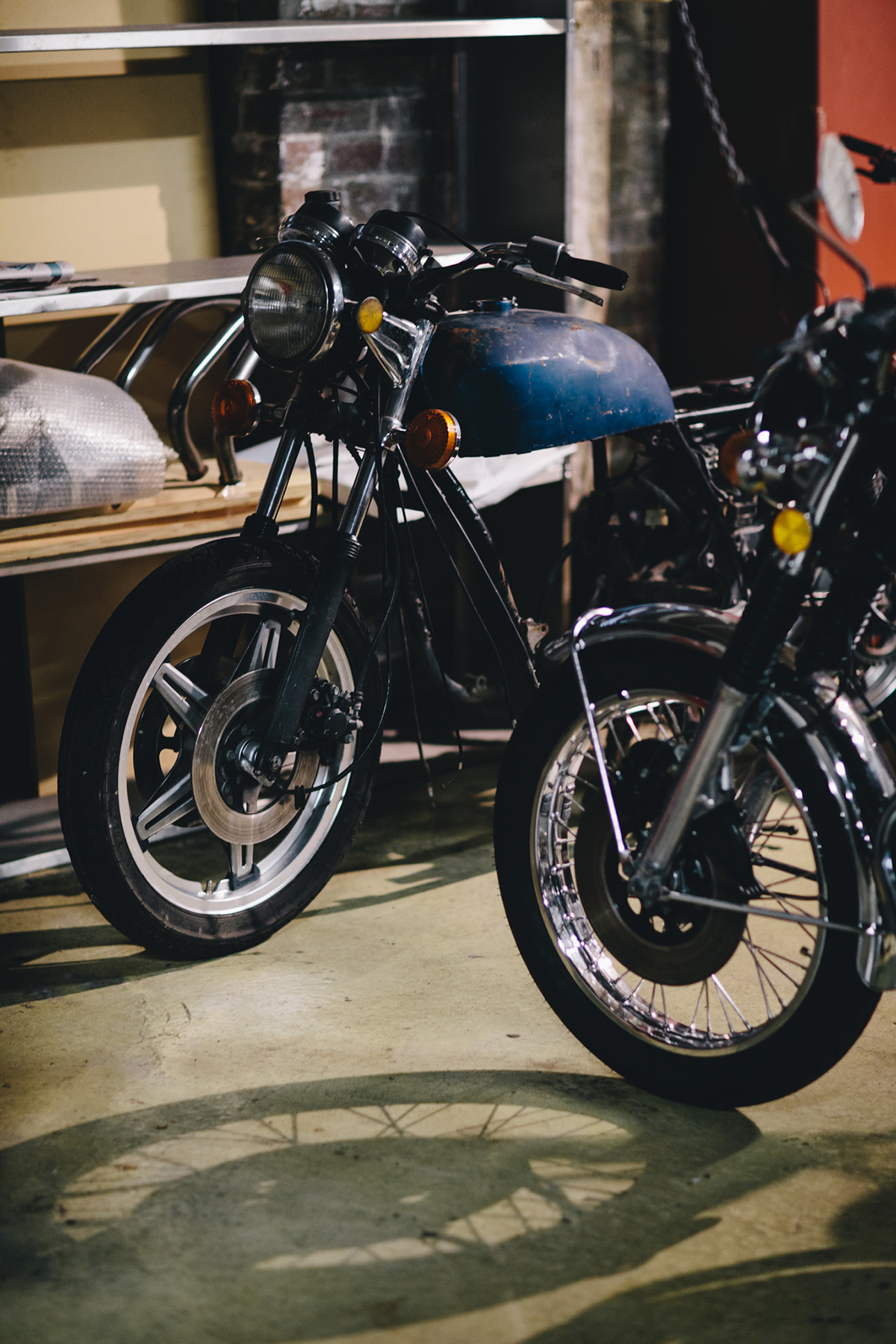 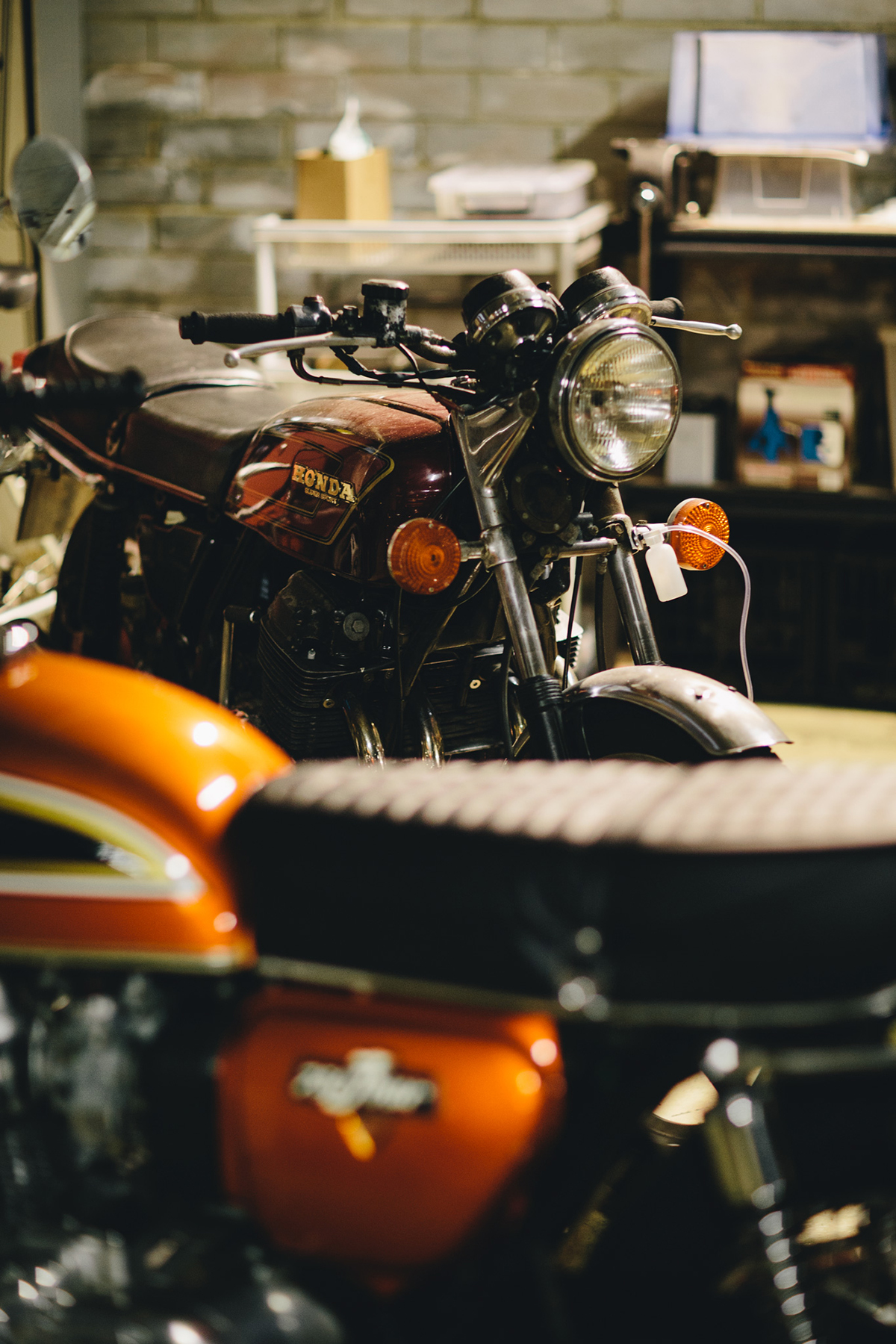 Years passed and just before his 18th birthday, Vini set out with all the money he had saved to finally get himself this fabled bike. “I would have bought anything I could afford, so long as it was a Honda Four from the 70’s. After much arguing with my Dad I finally bought the bike. It’s funny how parents are – they teach you to ride, but when it comes down to it, owning a bike is suddenly too dangerous. My Dad came home one day and there it was, a 1974 red Honda CB500 Four. He couldn’t believe I had done it! I still remember as if it were yesterday, he said “where is the key?” and I replied “you aren’t touching it…” – fair is fair, he didn’t want to help me buy the bike when I was short of a few hundred!” 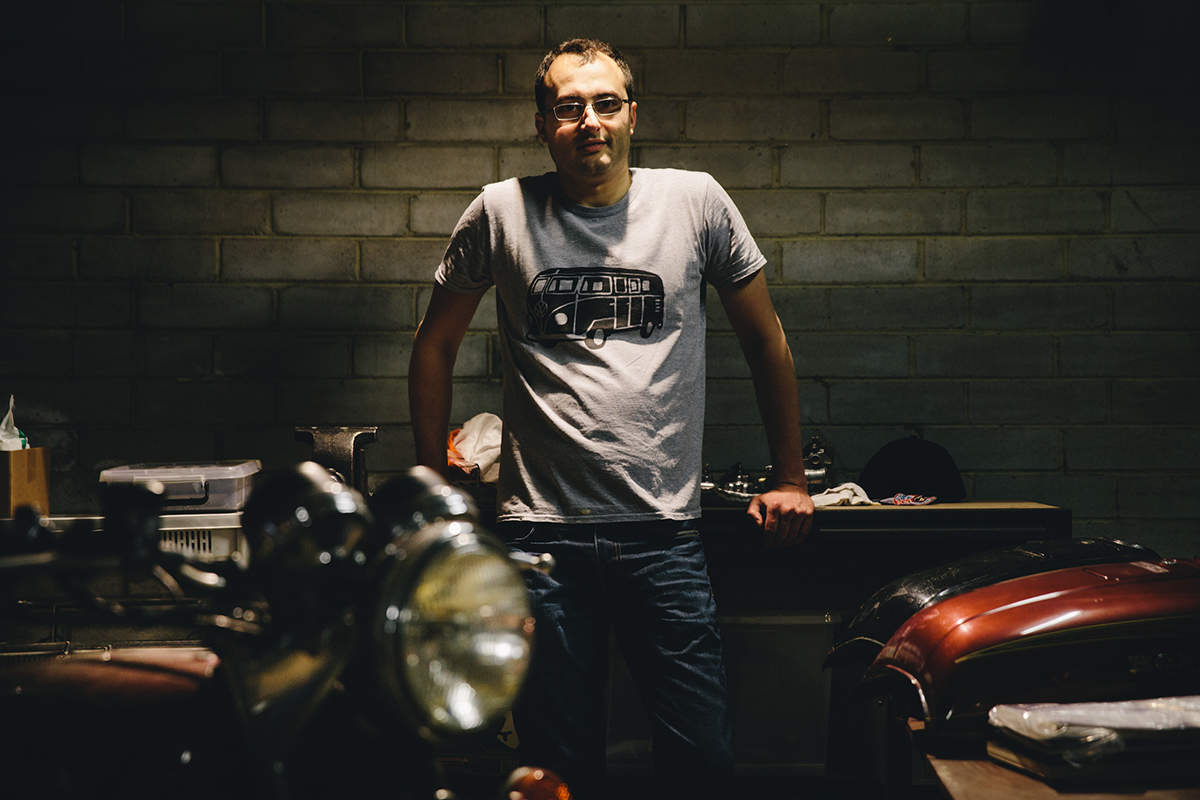 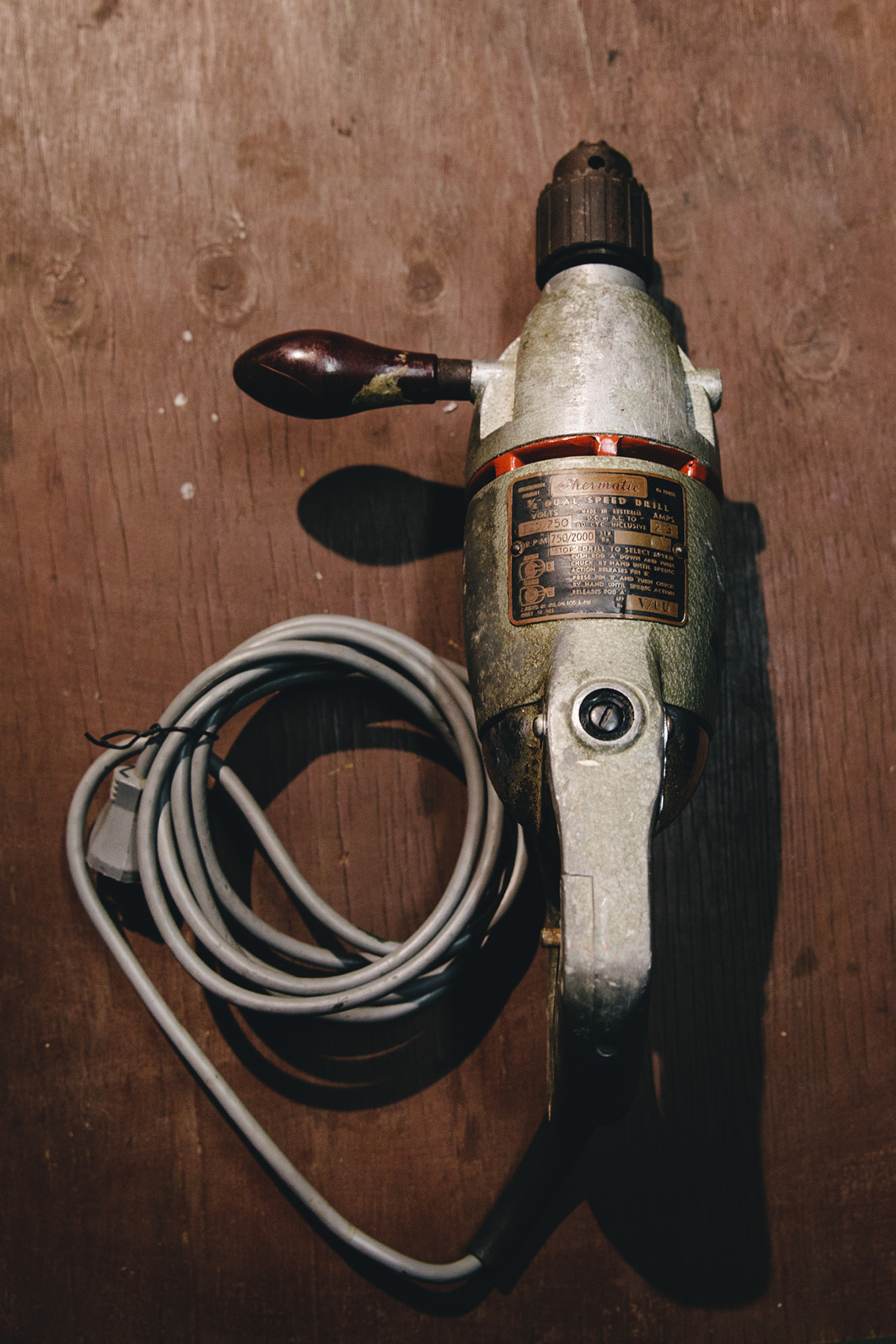 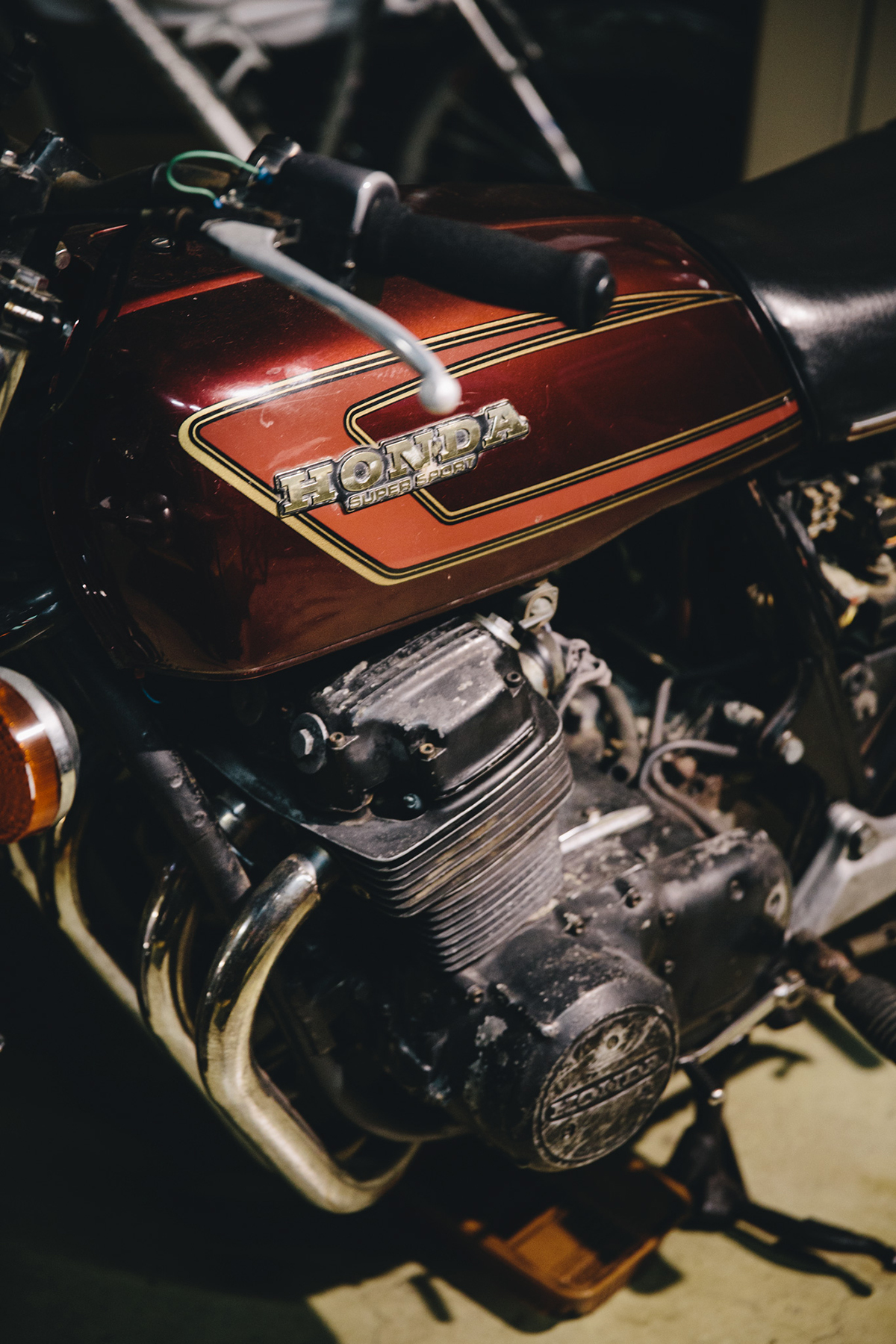 This new machine would naturally takeover Vini’s life, riding it to school and work every day, and in the evenings with his mates. “She was my best friend through my late teens to my mid 20’s. I have some amazing memories of that bike. Everyone knew when I was leaving, when I was arriving or I was passing by – the sound was unique. My Mum knew I was coming home when I was many blocks away. To this day, every time she hears a similar sound it reminds her of me coming home.” 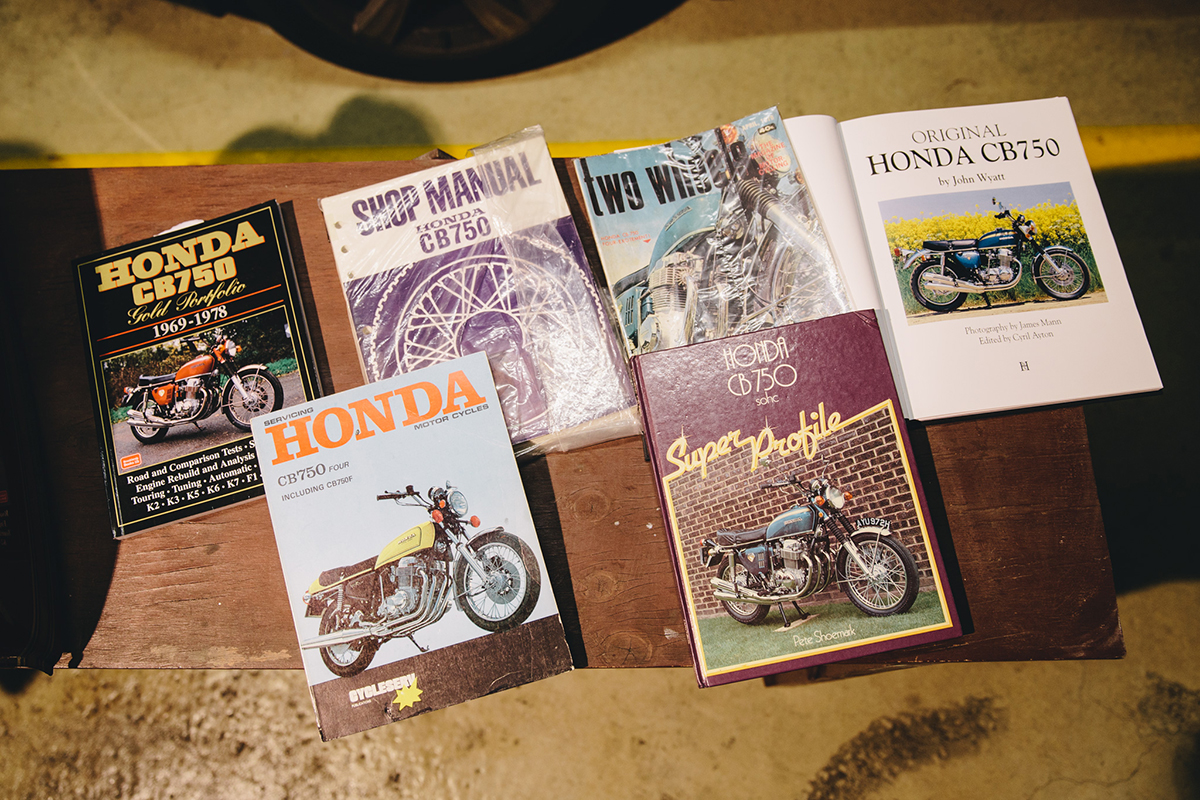 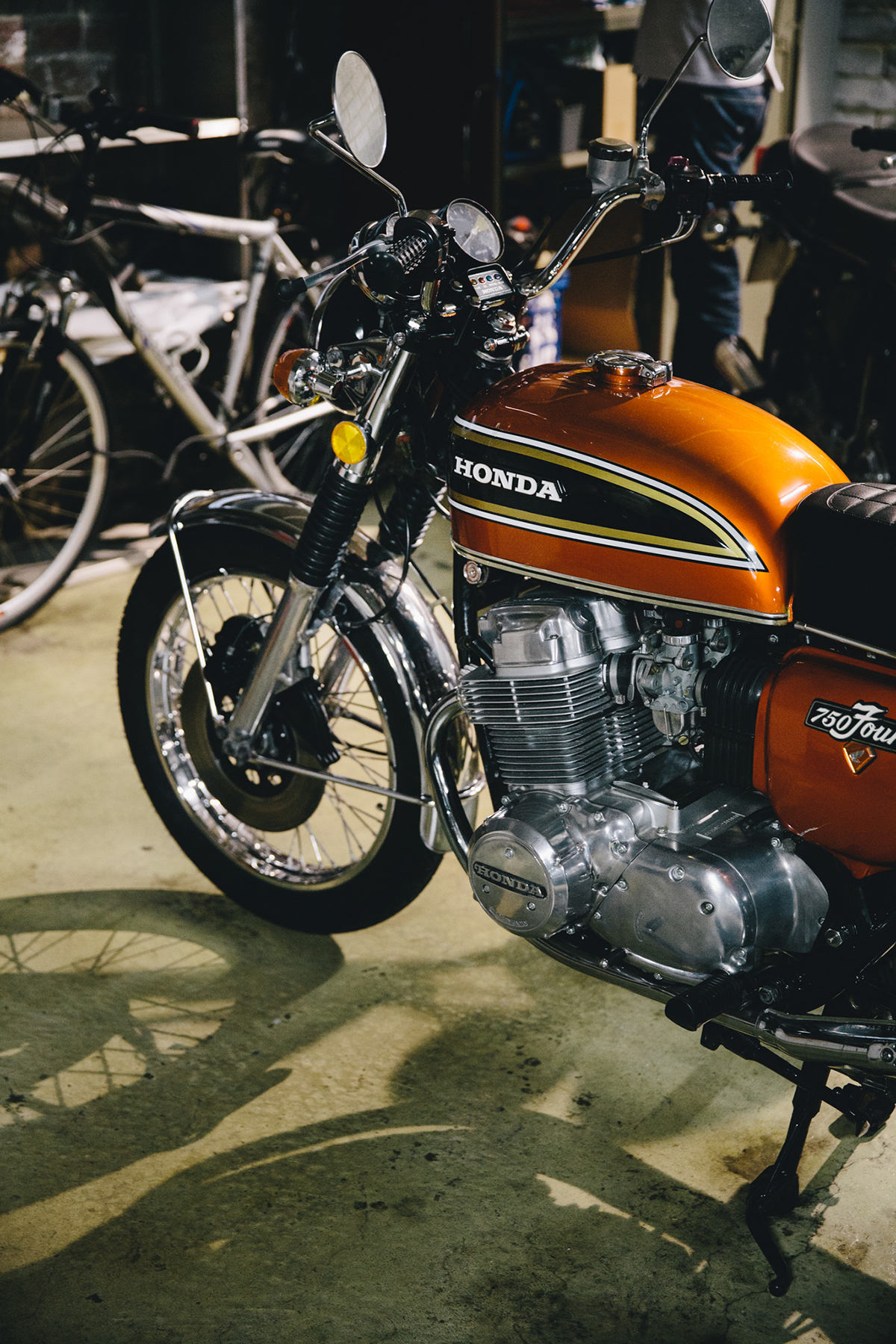 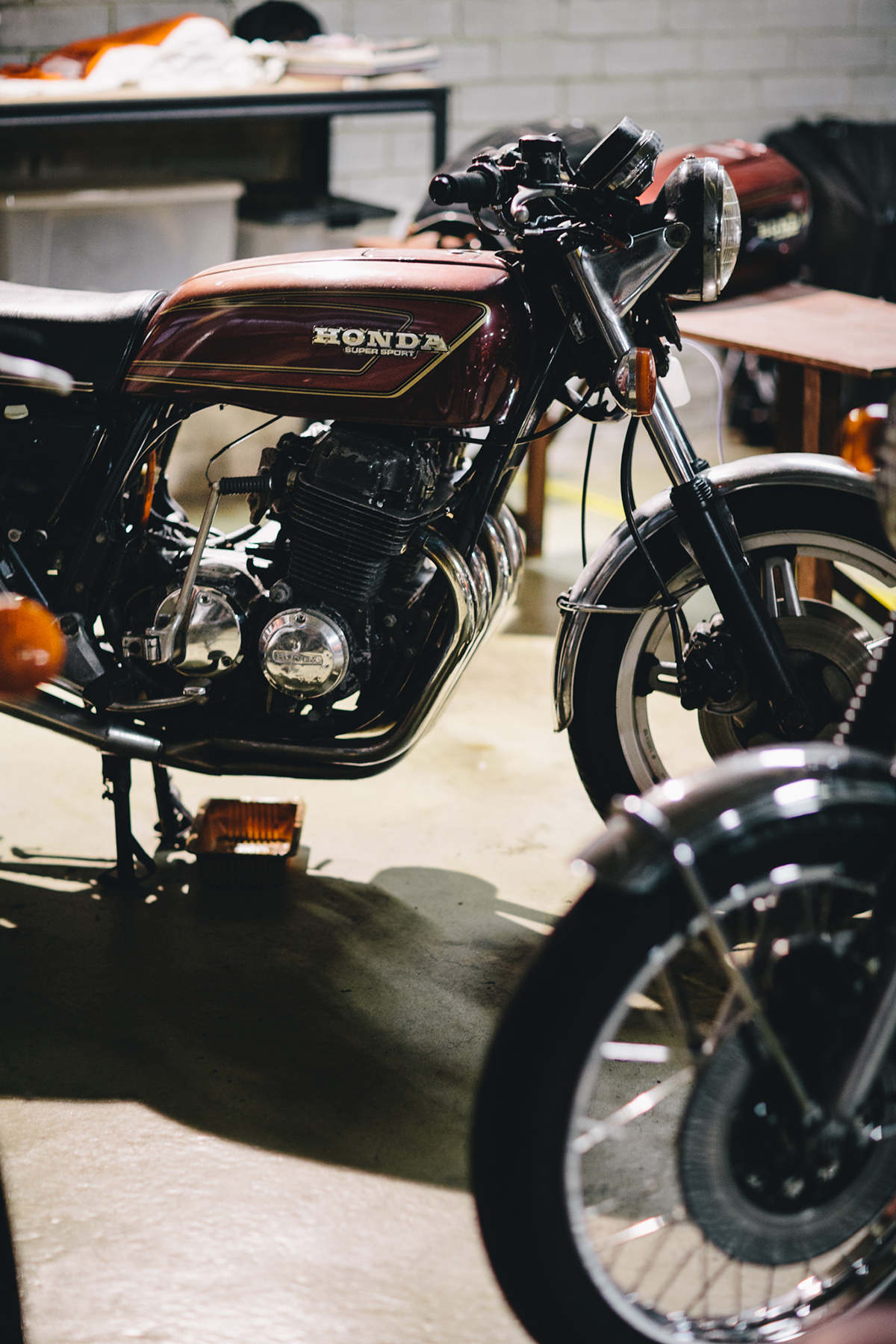 Now a somewhat older Vini still has his Honda CB’s, albeit in another country and with some different variants. His crowning jewel in his humble car space/work station is his orange 1974 CB750 Four, which is eagerly ridden each week. Original and unrestored bar a few bits that were required to make the bike safe and reliable, many hours are spent searching for parts around the world to help fuel his passion for these machines. Next to this beauty is a Black 1978 Super Sports model, the last of from this family of CB750’s.

“I bought this from a guy who had owned it since brand new in 1978. I always wanted a bike that I knew the history of and when I came across this one I couldn’t believe it. I went to see this guy and he had stories and stories about the times he used to ride this bike. He wanted to restore it but he didn’t have the motivation anymore so he wanted to sell to someone who appreciated it and would bring the bike back to show him when done. He could have sold it to someone else but I guess he saw the passion I have for it, he was collector himself and he knew what it meant. This bike now is work in progress, it is stripped down and being rebuilt in the very limited time I have but it is getting there.” 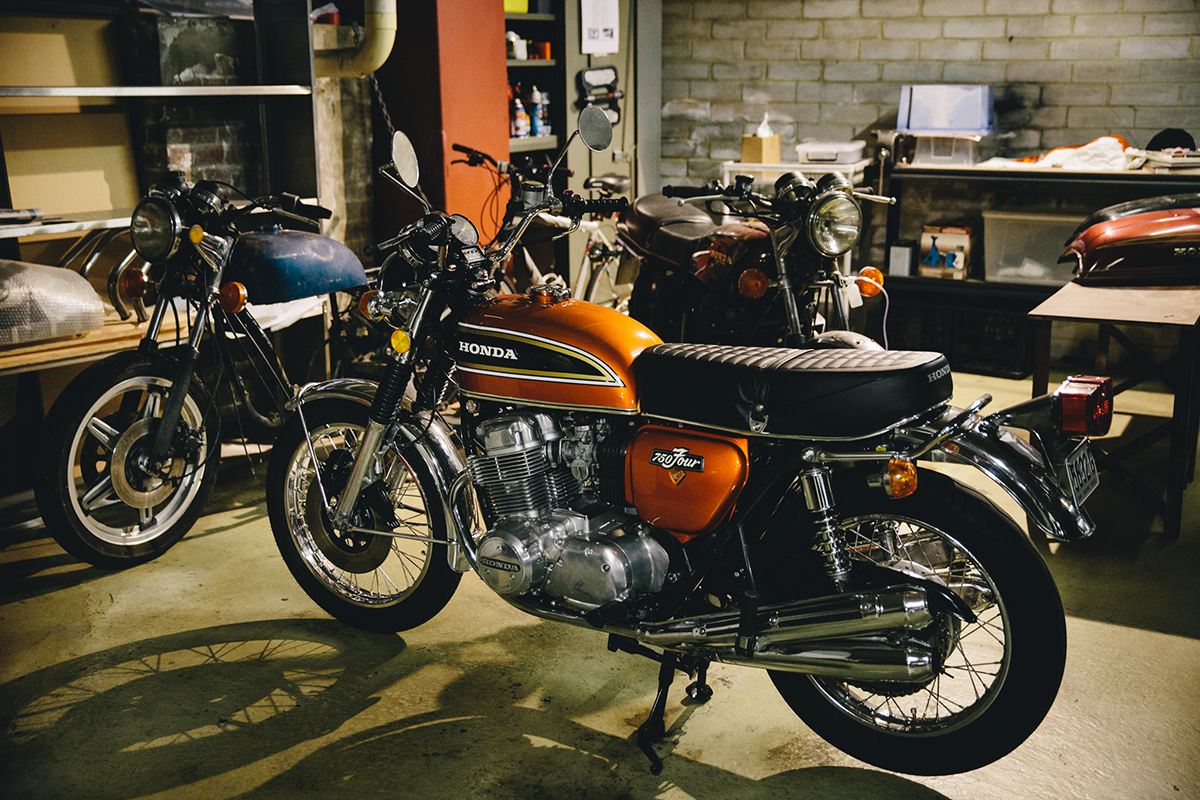 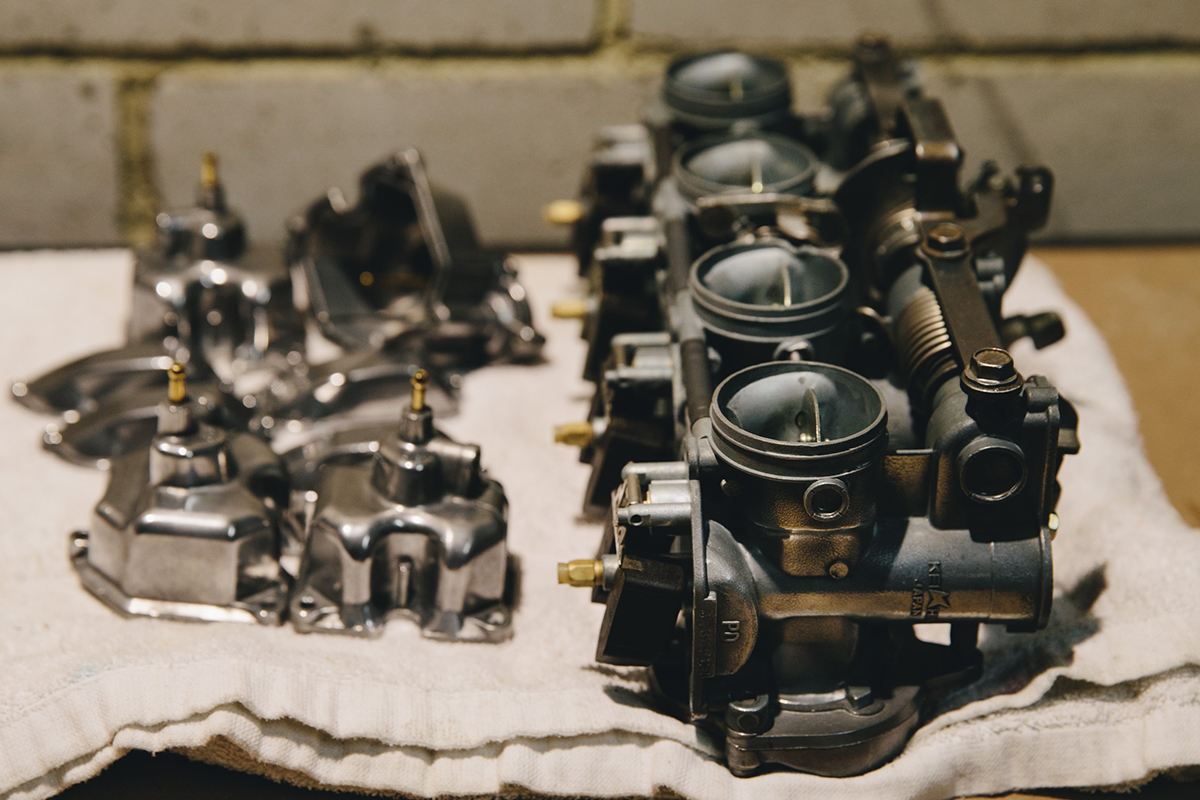 Last, but certainly not least is another 1978 CB750 Super Sports. Vini is of the opinion that if something useful and interesting comes your way in life, then just buy it. And that’s how this machine was added to his collection. “I bought it thinking that I was going to use it for parts but it turned out to be a good complete bike which just needed some work and a good clean. I am currently working on putting it on the road and hopefully it will be ready soon. I have been accumulating parts for these bikes for a while and enough to make it look pretty good. I don’t like when people chop their Honda Fours but there is good side to it, I get to buy some of their parts and that helps me restore my bikes.” 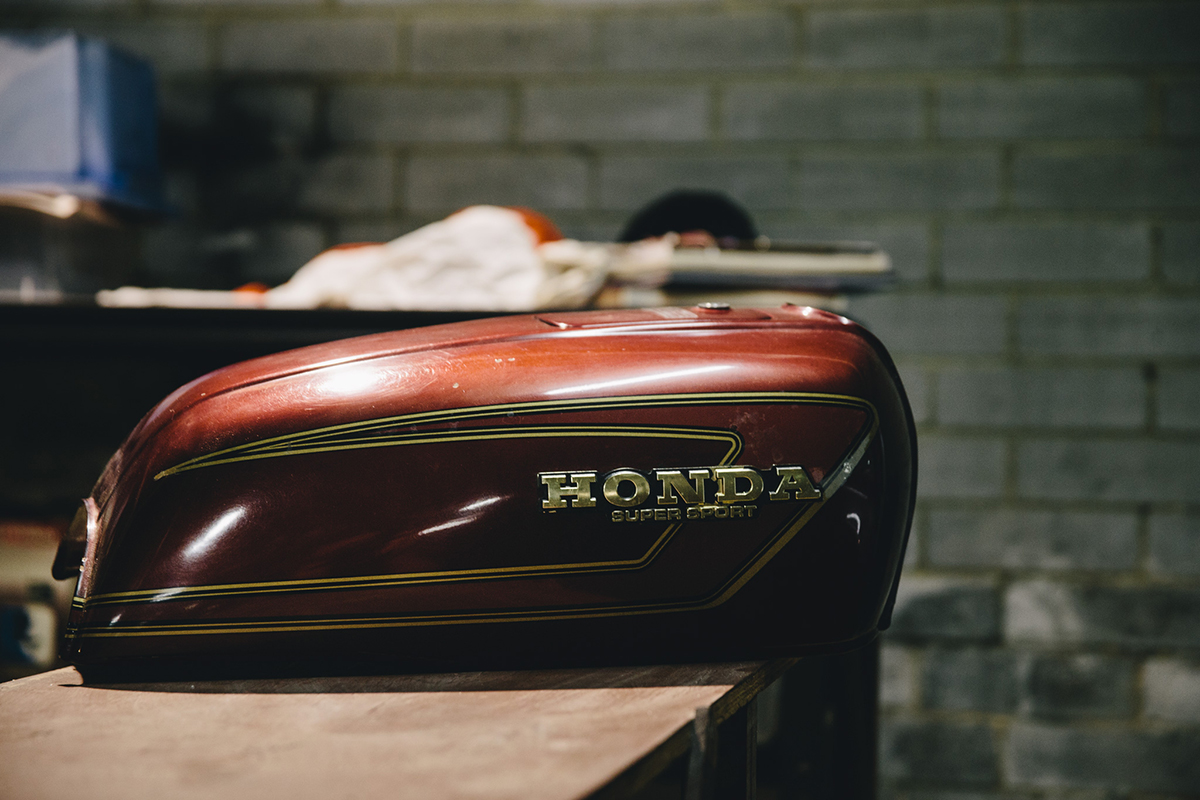 Despite having his workspace in the large shared garage of an apartment block, Vini makes the most of his useful plot of car space. The toughest part is setting aside the time to use it all. “I wish I could spend at least a day a week in the garage, one day every weekend. It is easier said than done so I get to spend probably 3-6 hours working on my bikes a week. Sometimes when I have set tasks to complete I spend a few hours here and there after work until I finish them.” 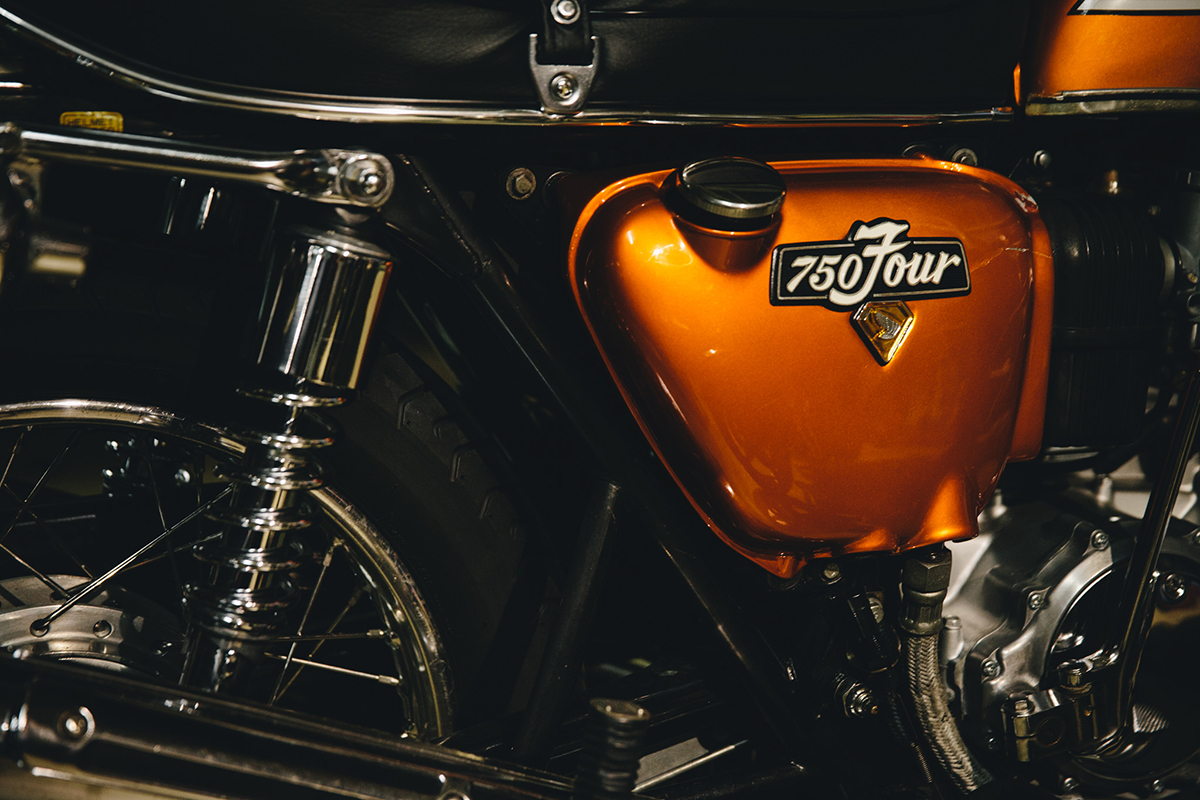 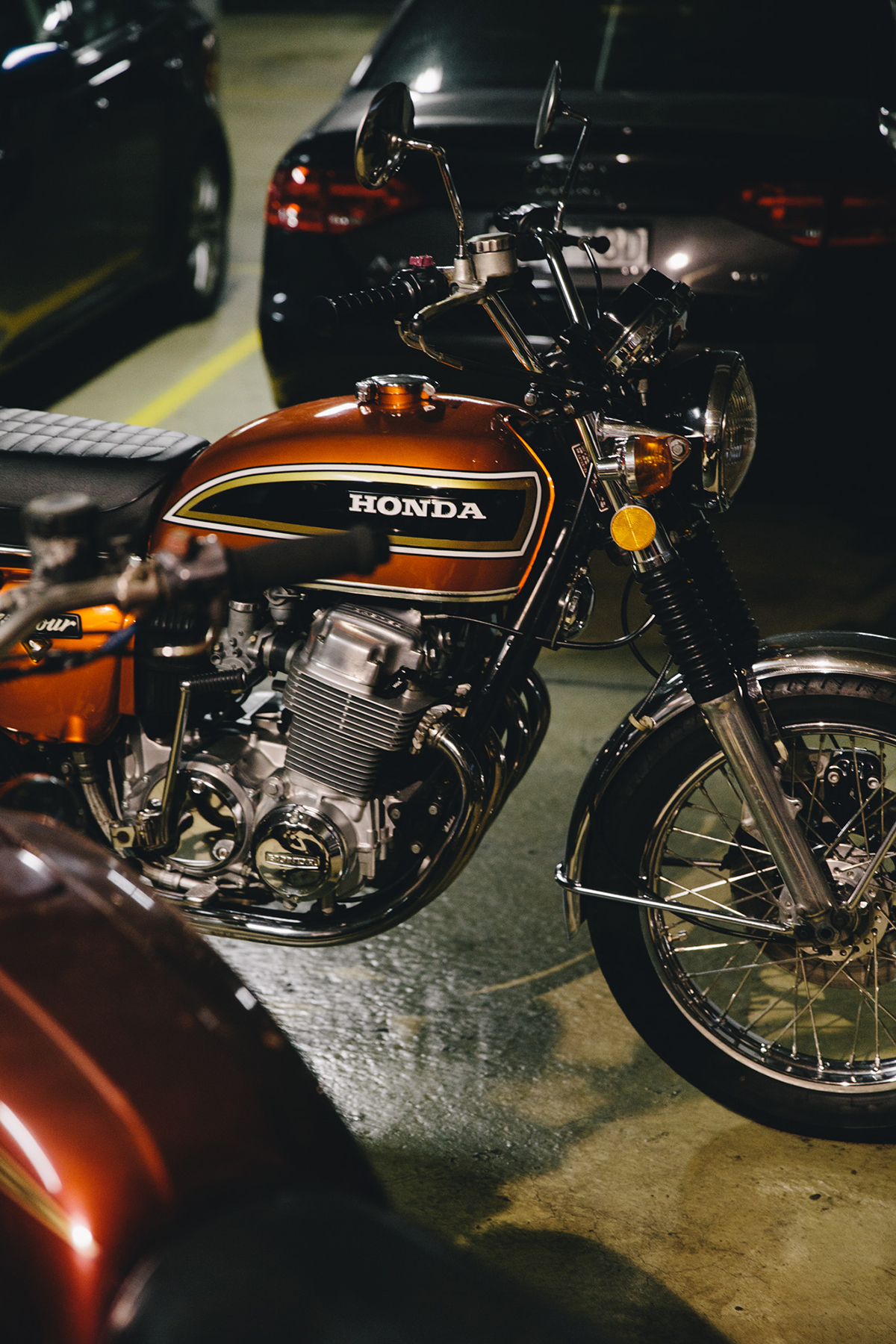 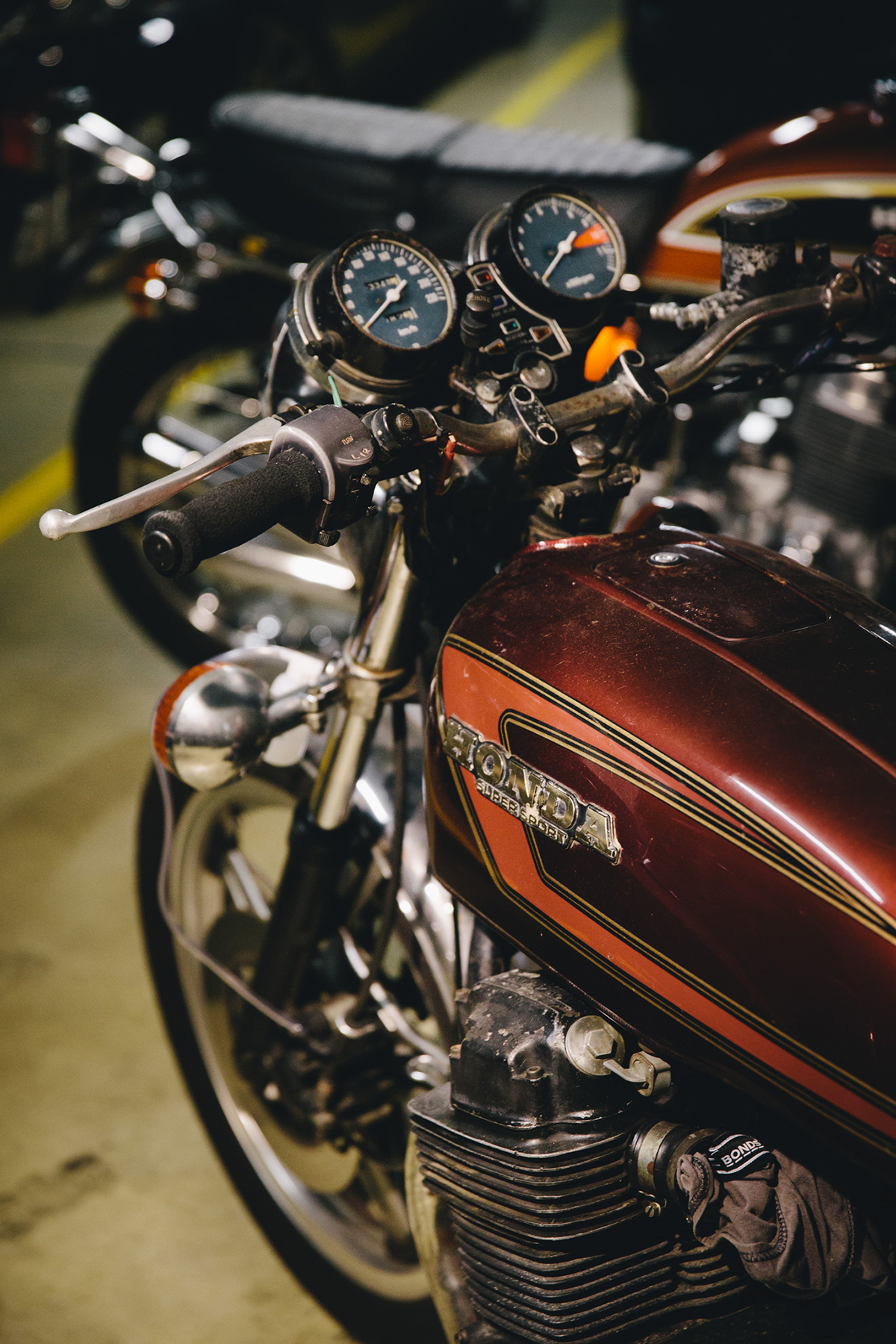 “Spending time working with my hands on the bikes is very important to me. It is a great form of therapy, which I’m sure many people reading this will relate to. I take it apart, get my hands dirty, troubleshoot a problem and I make it work. It is satisfying and it doesn’t take much to see significant results. Besides, it gives me that feeling of saving something that perhaps would have been forever lost. You know how it is when you see potential in an old forgotten toy you want to bring it back to life? It is very easy to buy the bike that already works…” 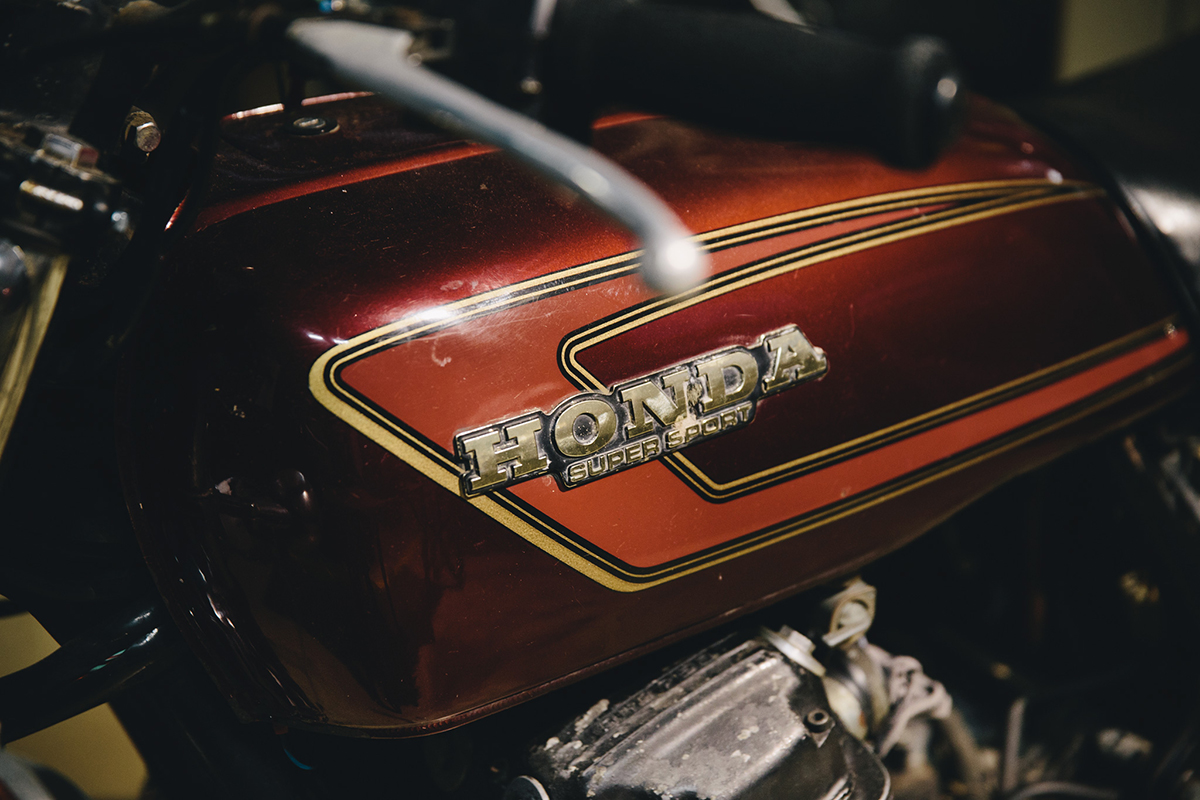 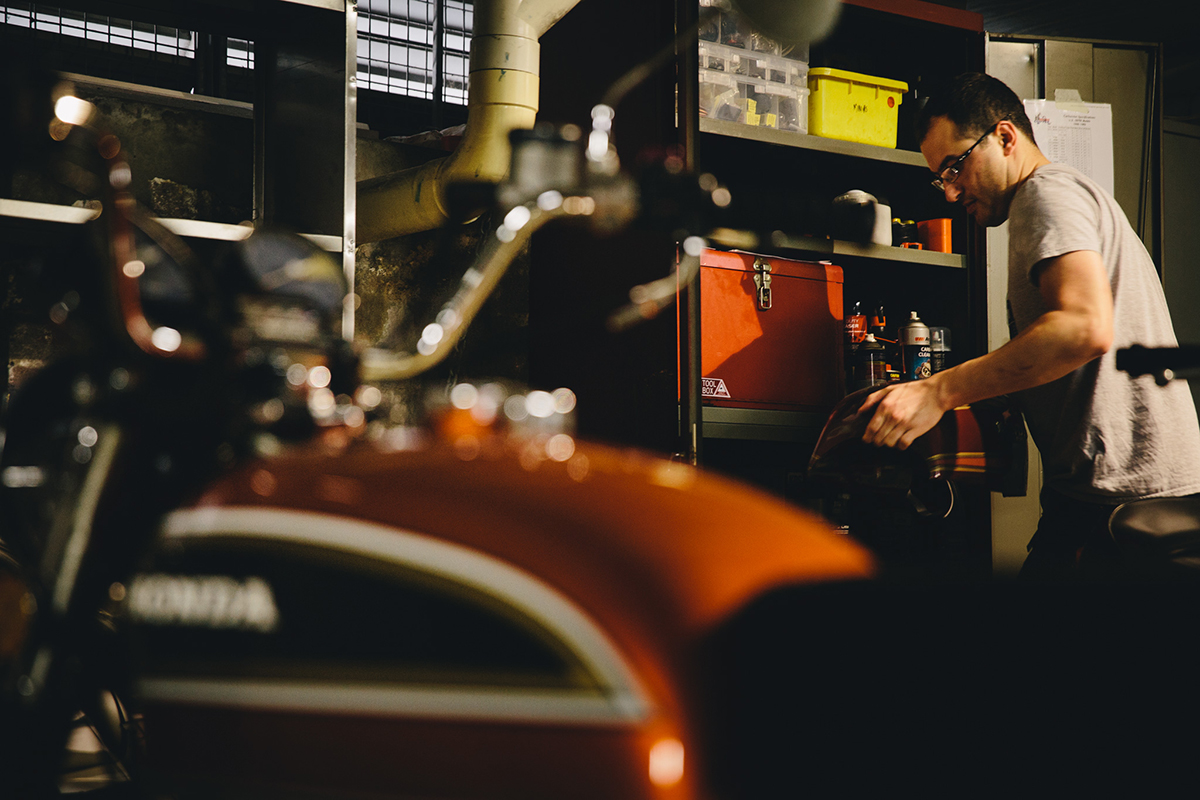