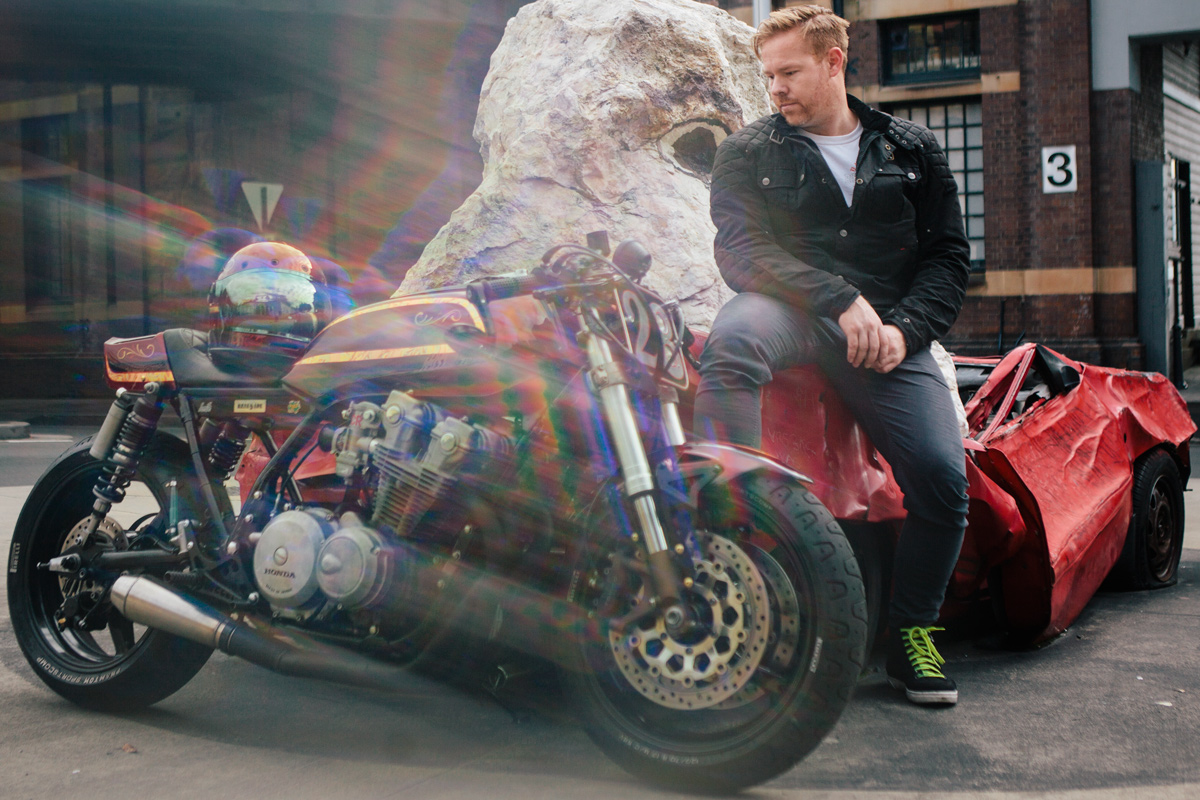 The Forever Bike; named in justification of all the work that was put into it, the paintwork alone is enough to stick around in your thoughts forever. 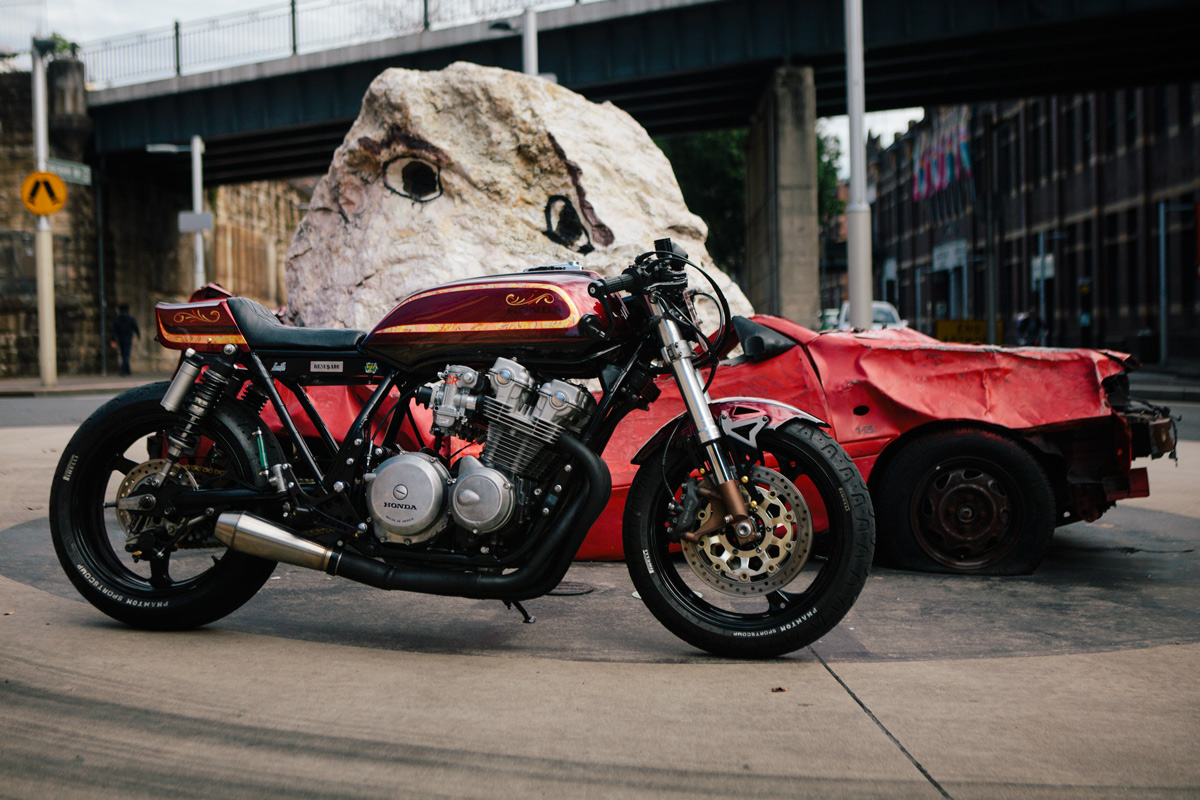 Despite some infrequent bush-bashing on bikes as a younger feller, this monstrous CB900F is actually Brendan’s first bike. Not a bad start, that’s for sure. The blame for the motivation of this purchase falls on a familiar face, Stephen Broholm whose XS650 we’ve featured before. “Mr Broholm, who was dating one of my wife’s friends and started showing me photos of his build… immediately I knew I need to get a bike!”

And that bike, of course, would end up being the 1982 Honda CB900f. “I loved the CB900 due to it looking so impractical, 4 cylinders wide and a piston’s width sticking out proud either side of the tank… and as I couldn’t justify buying a CBX1000, it was the next best impractical thing to get for my first bike ever!”

After calling the owner of the CB900F without the intention (yet) of making the purchase to find out some for information on the bike, Brendan found himself on the phone for two hours chatting. After coming back into the family dinner he was supposed to be attending, Brendan made his first bike confession “Argh, I think I just bought a bike!” 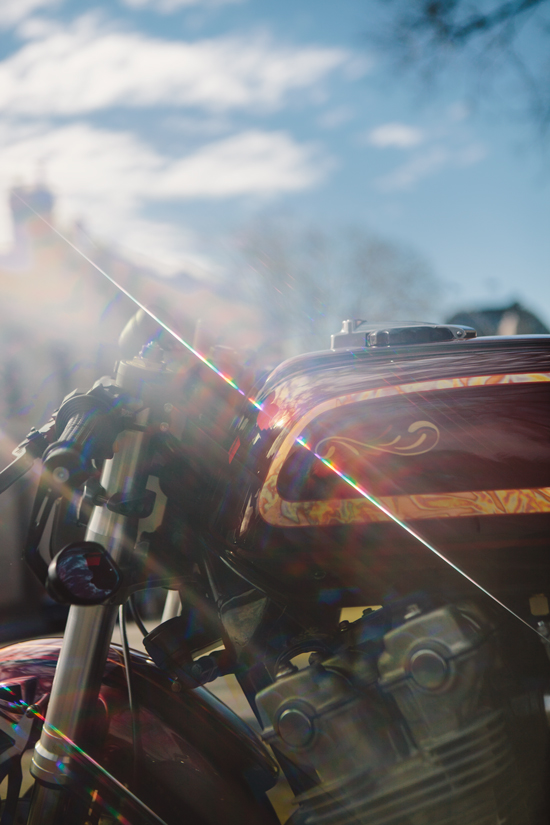 Simple intentions came with this new purchase; it was to be a daily ride with a café racer vibe added bit by bit. Nothing over the top, but of course once one task is complete it’s time to find a new one. “This worked well for 6 months until one day I was riding home and the carbies start to overflow. My intention that night was to just pull the carbies out to get ready for a rebuild, then the next thing I know it was 2am and the bike was completely stripped!”

A freak, sudden occurrence I’m sure a majority of you have found yourself in. 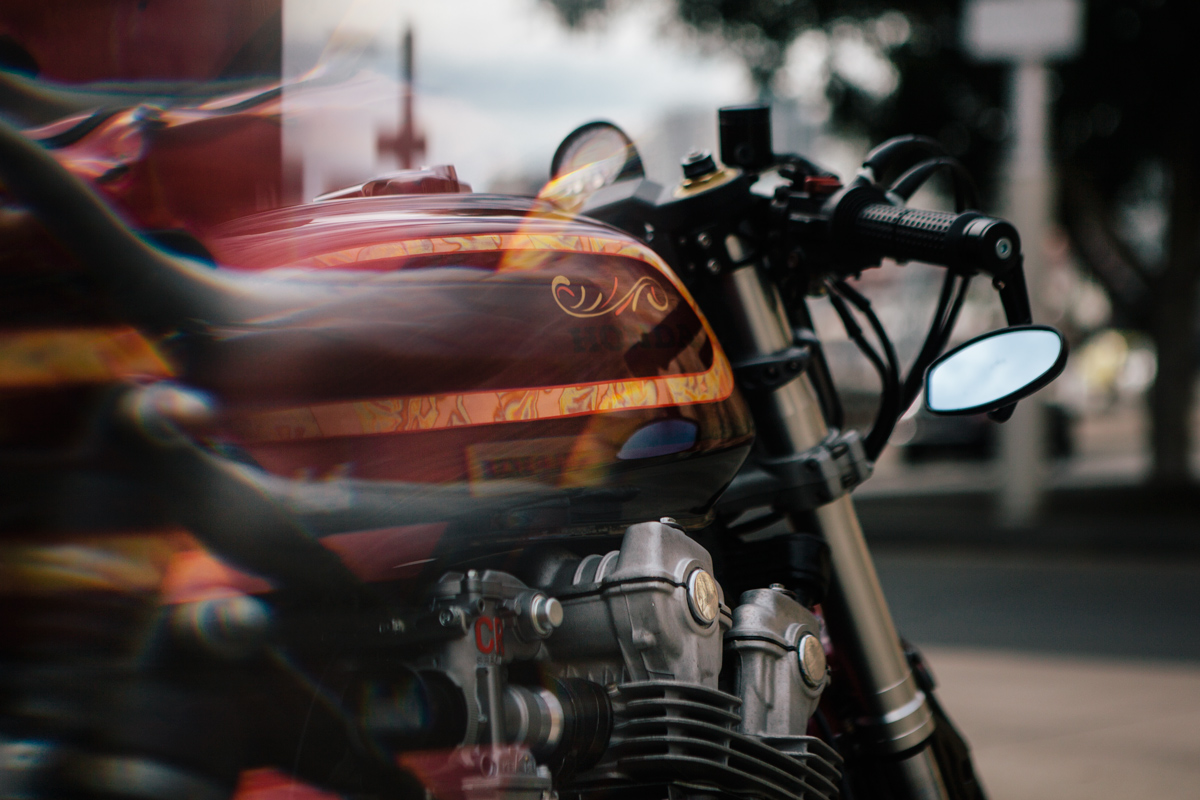 The following work on the bike had a myriad of turning points and influences that were driving the design; two decisions stood out however. When Brendan took the bike to RB Racing, he and Harley decided that this was a “Forever Bike”, the method of doing things right the first time was applied, opting for the CBR1000RR front end and a CBR600RR rear wheel. “From there on all the decisions were made with the context of “well we have already gone this far, there is no point in cutting corners now”

The second decision came after sending the Throttle Roll team some photos of the bike in progress. “They suggested I do something different with the seat… this is when things went from the bike being a raw metal ratty finish to what it is today.” 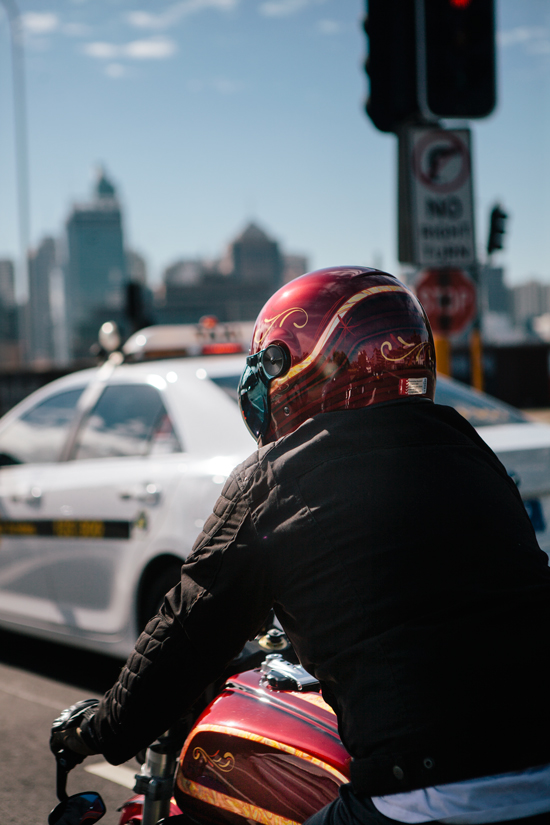 “I love the aggressiveness of the power delivery, with it being closer to a 2-stroke hitting power ban in comparison to how it behaved prior. It’s just a throttle roll (ha ha get it!?) and then get ready for a combination of noise, tyre spinning and everything around you blurring into light speed… well that’s how it feels for me with my amateur hour riding capability.

Also the fact it looks like it was built with purpose and track performance in mind, but was then schmick’d up with the awesome Smith Concepts paint work.”

The hardest part about this bike (apart from paying the bill) was the realisation that Brendan might not have the time or skill required to finish the bike.

“Which wasn’t all bad, as it forced the decision to bite the bullet and send it off to Harley at RB Racing and Kyle at Rene9ade to avoid it ending up as another unfinished project for sale on eBay.” 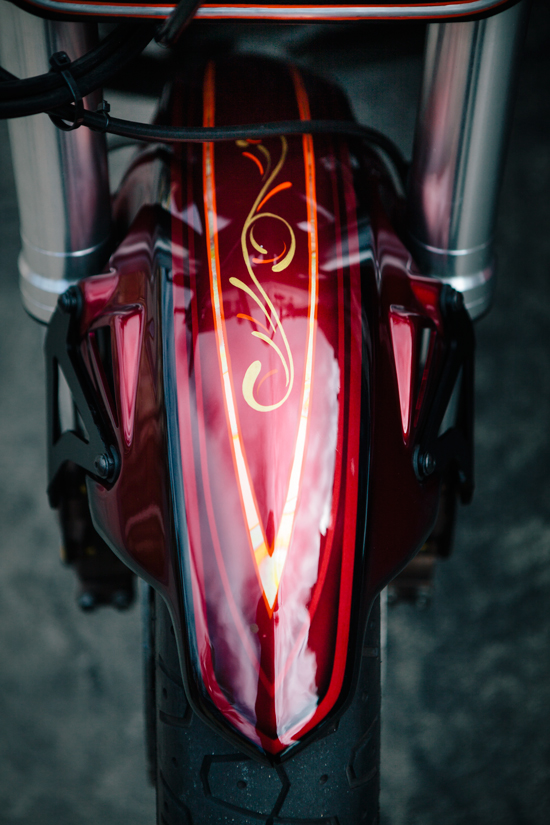 The paint job on this bike is stunning, with a deep red covering the bike and a myriad of colours floating around inside the gold trim. “Whilst at Rene9ade, Paul brought in an old Kawasaki tail to see how it looked on the bike, it was in original condition and looked like a good period match. So after deciding it had the right form for the job, I asked the guys what colour it was (due to my severe colour blindness) and it was then we decided a red and gold combination was on the cards. However that’s as far as my styling input went. As a colour blind engineer, I knew design and colour coordination was best left to someone else. Luckily for me, the two K’s (Kyle at renegade and Kyle at smith customs) were able to come up with the goods after being given full control over the design.” 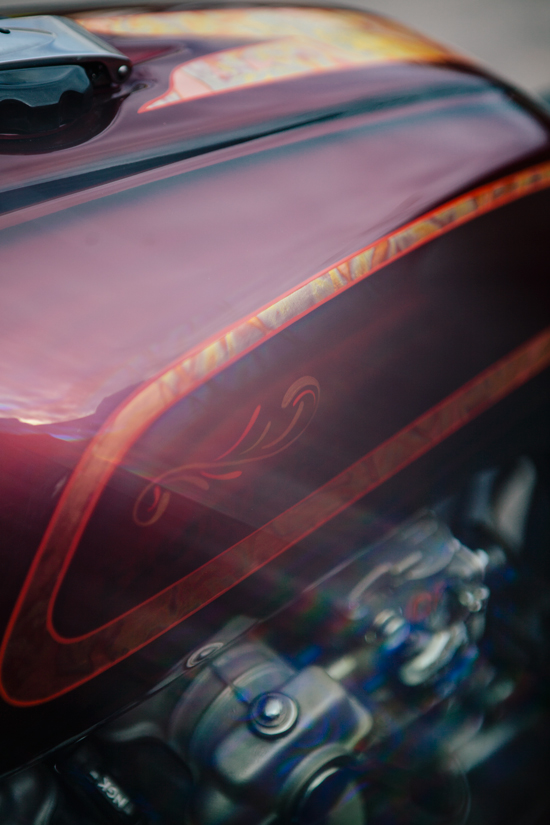 “Believe it or not it took me about an hour staring at the finished bike in full sunlight before I walked on a certain angle and was able to see all the detail that was ‘subtly’ painted in. Things like the Honda writing, the shading and highlights and even the bottom of the tank painted out in black, which is apparently easy to spot for most normal people.. .well according to my eyes and brain these are details I only get to see on special occasions!” 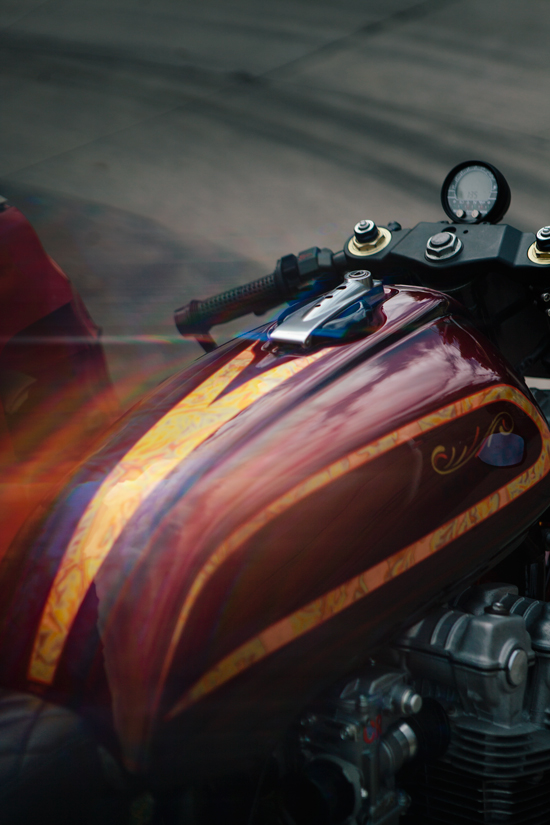 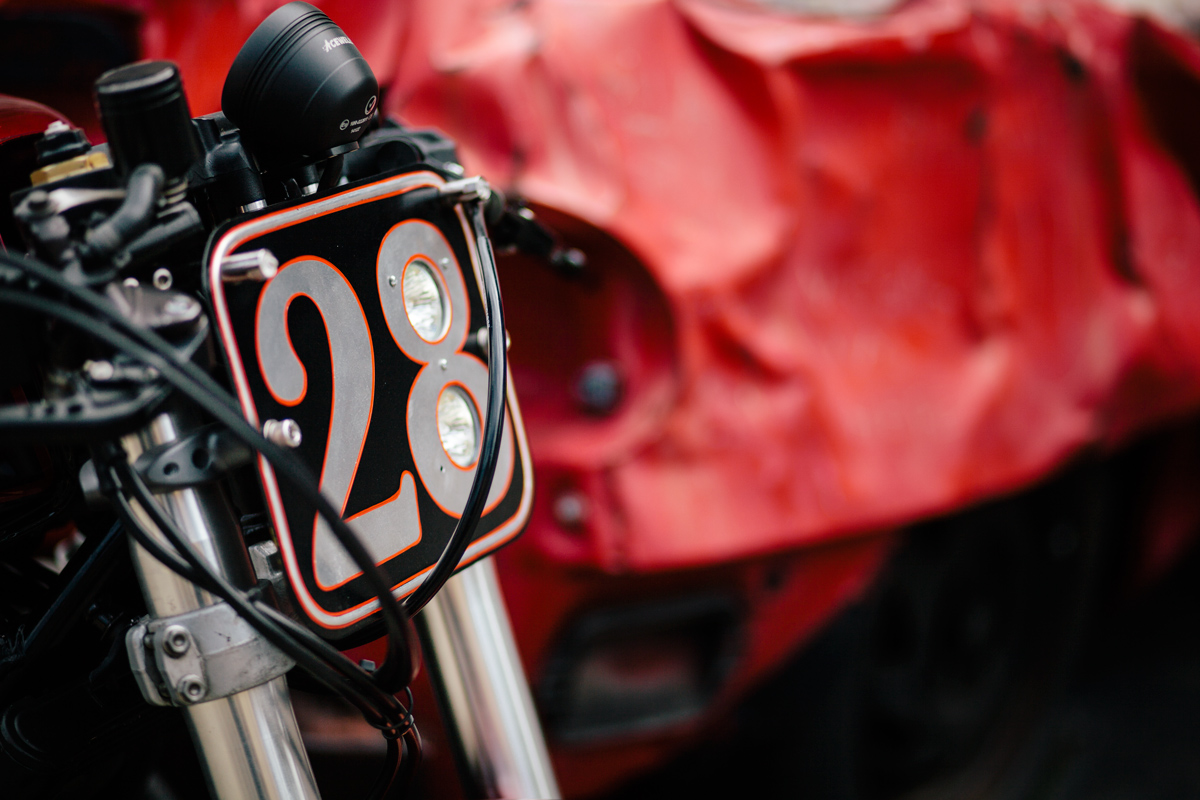 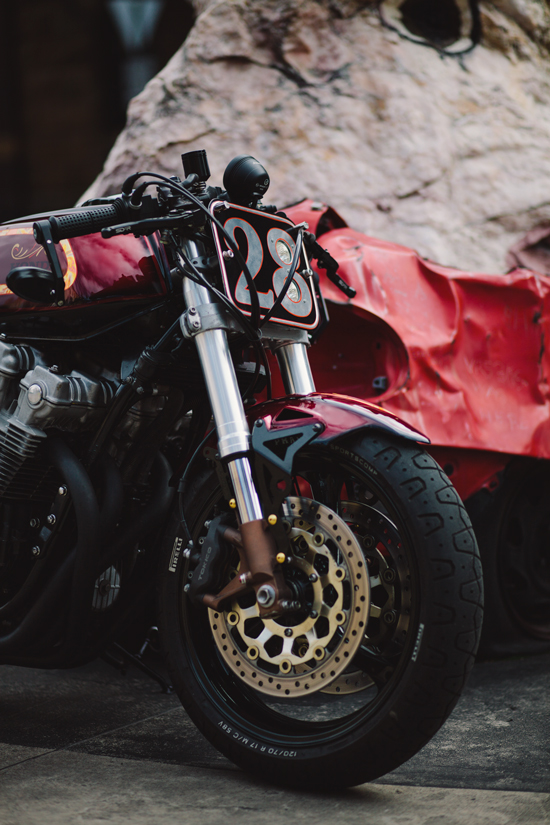 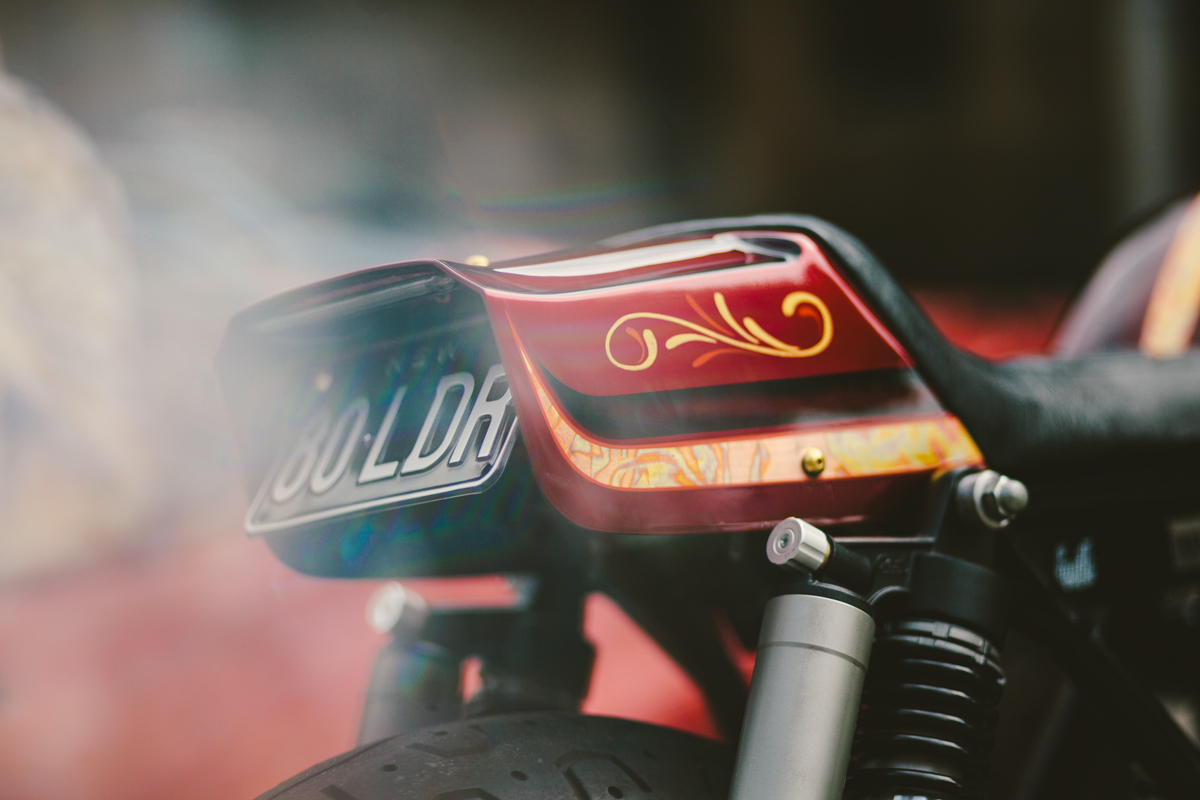 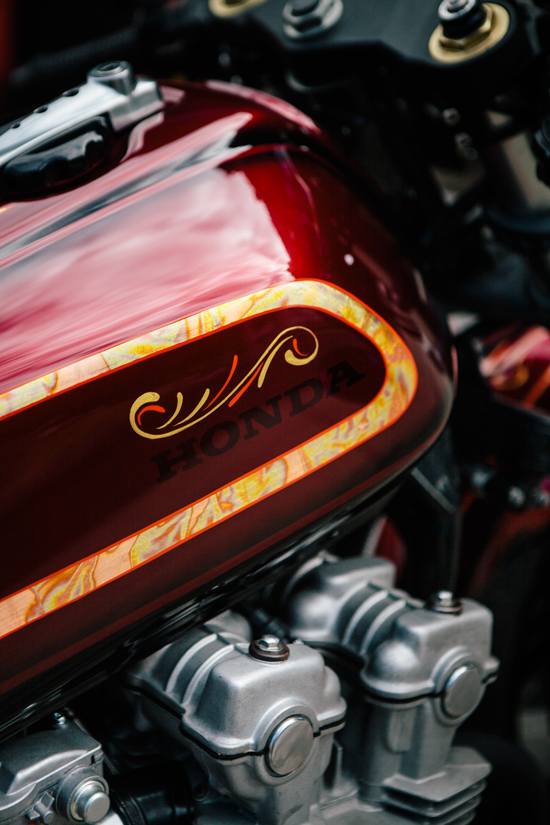 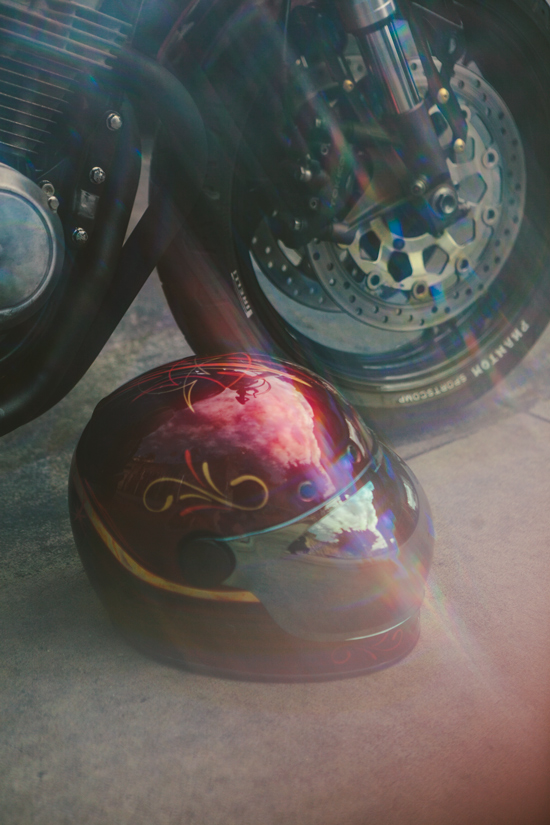 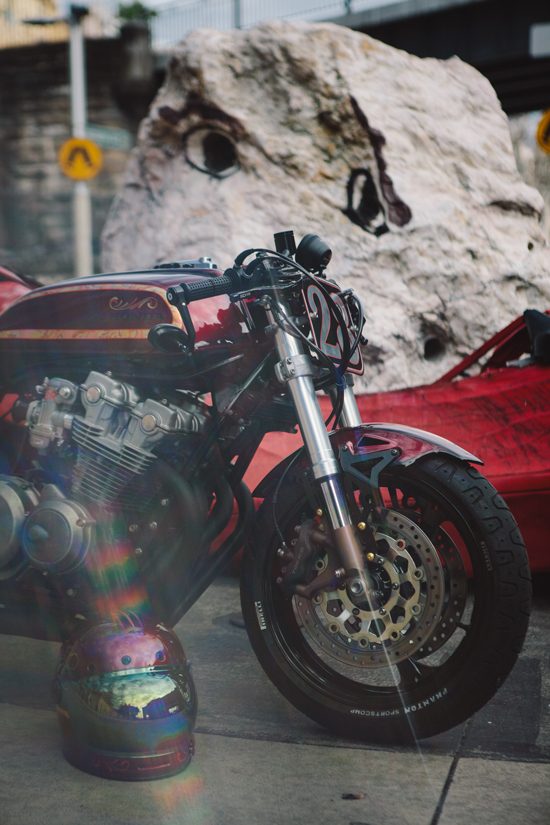 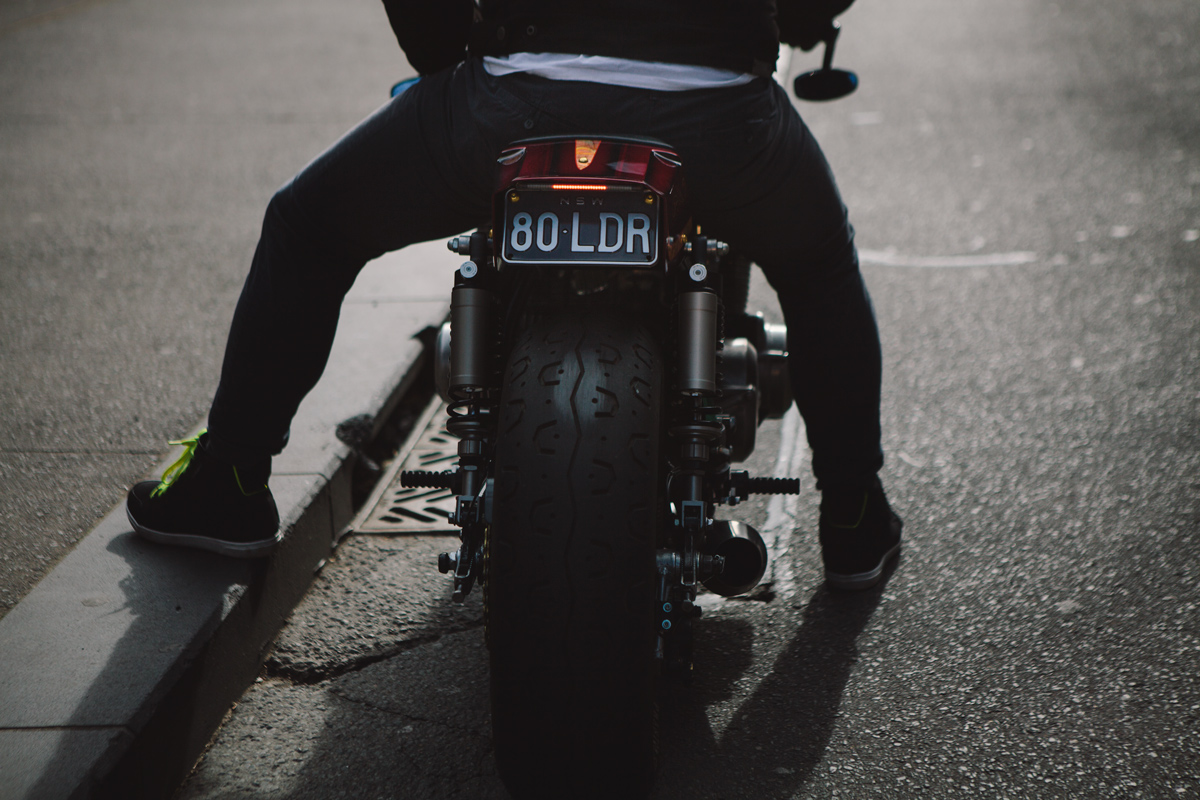 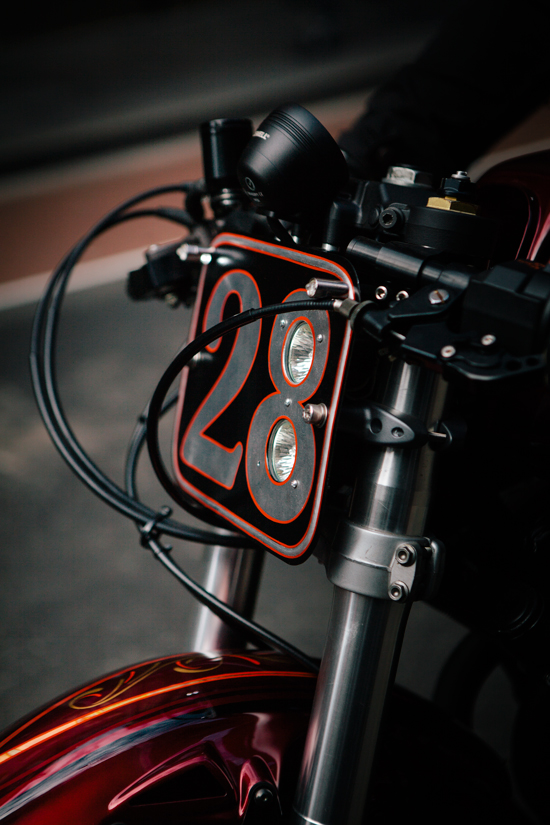 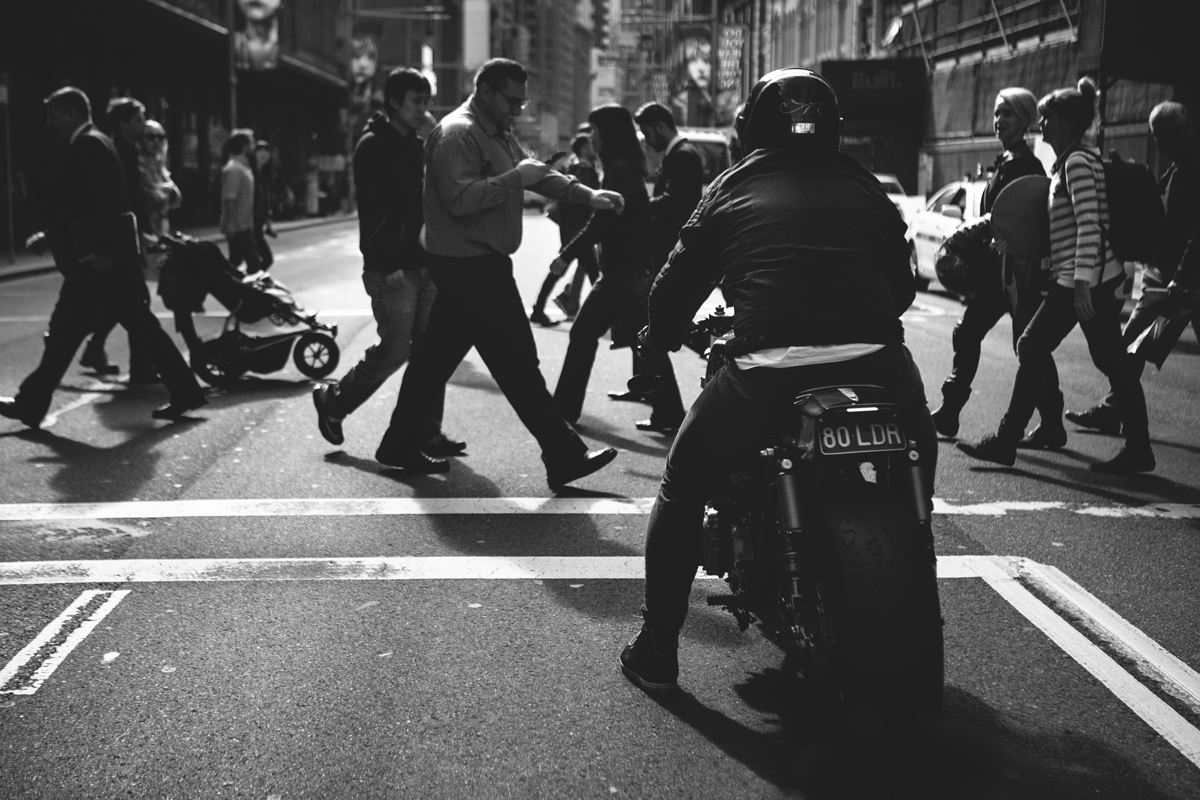 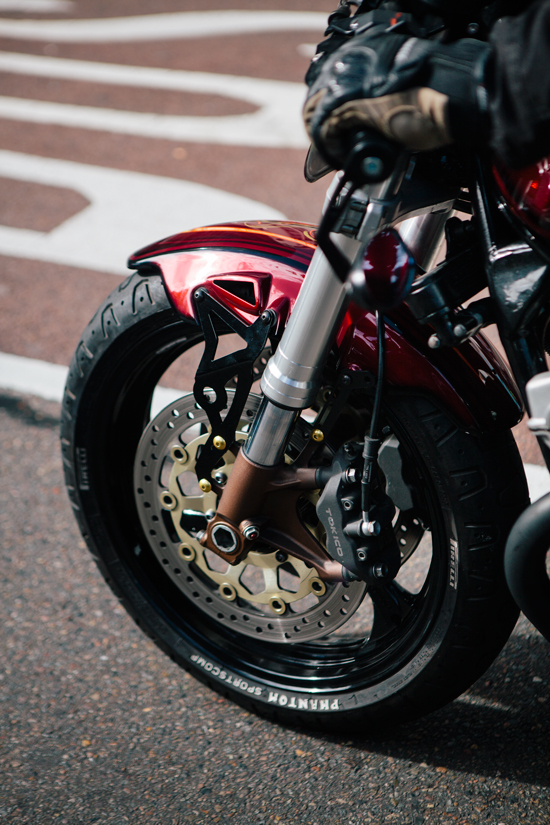 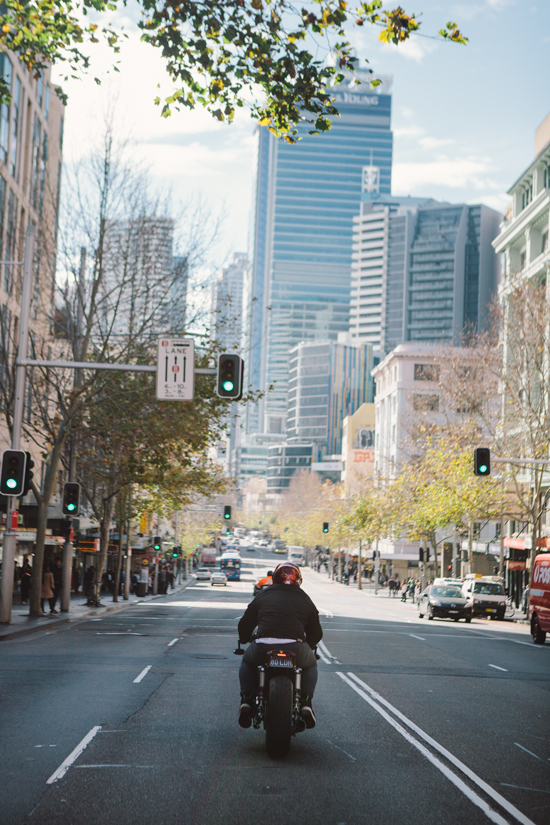 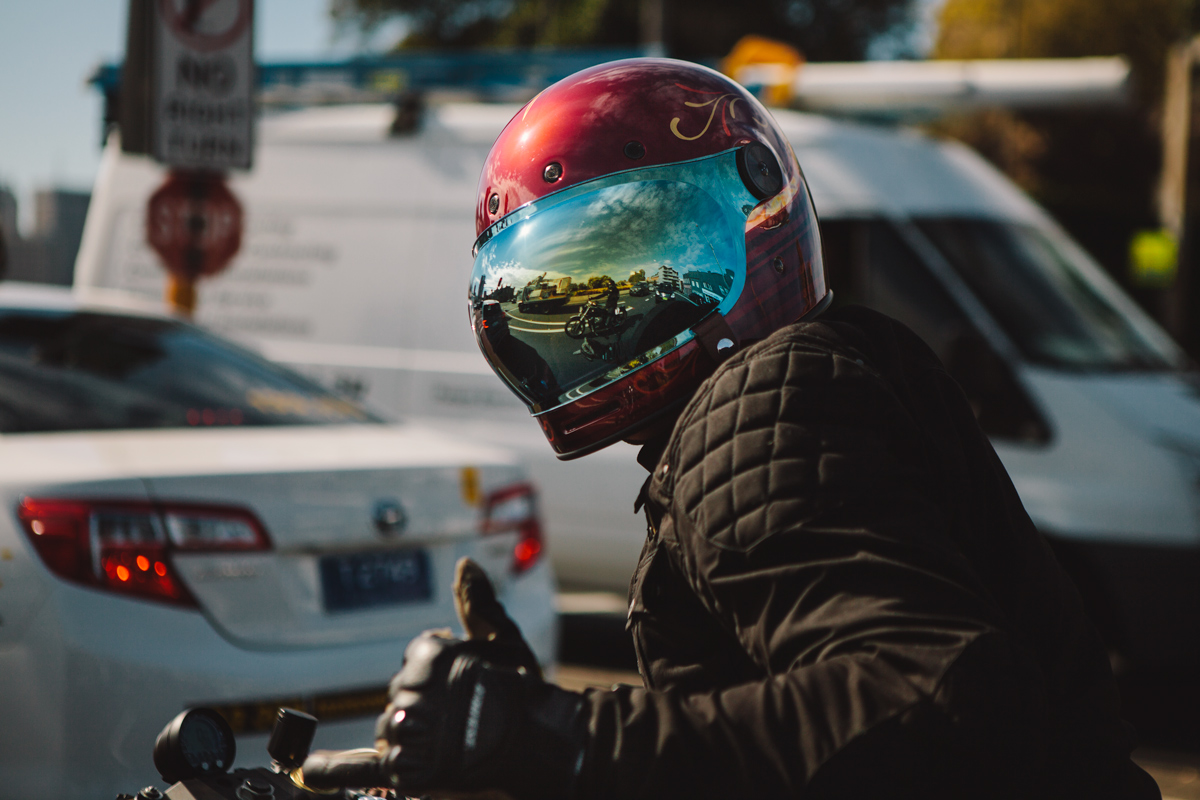